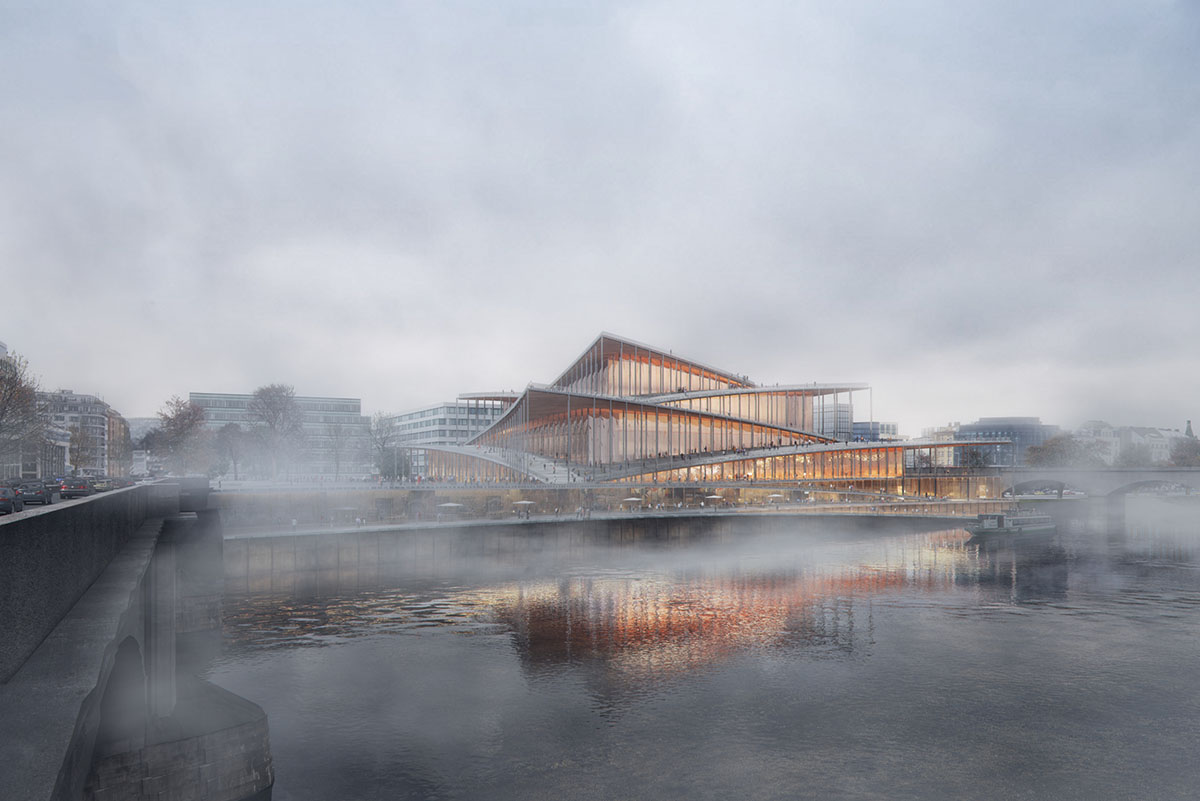 Named the Vltava Philharmonic Hall, BIG’s design will be the first national concert hall in over 100 years in its history.

With its ascending geometry from the Vltava River to the skyline of Prague, the design features a series of public plazas, slender and angled colonnades that flow with the structure itself.

The new Vltava Philharmonic Hall will be built at the intersection between the Vltava riverfront and Prague’s Cultural Mile, it will connect the Old Town’s traditional cultural scene with the Holešovice neighborhood’s modern art scene. 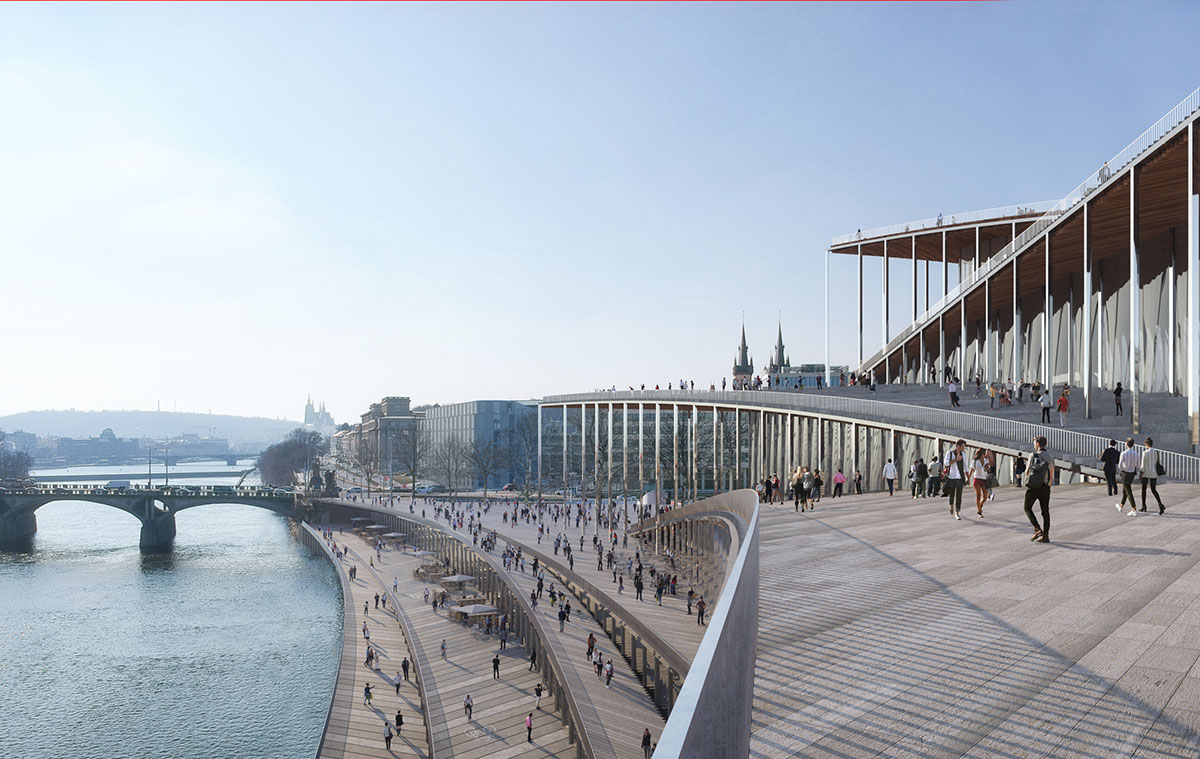 The winner was announced by the City of Prague together with its Institute of Planning and Development (IPR Prague) during an official ceremony held on 17 May at the Center for Architecture and Metropolitan Planning (CAMP).

The international Vltava Philharmonic Hall competition was first announced in August 2021. In November 2021, the organizing committee of the competition announced the names of 20 finalists competing for the grand music hall. 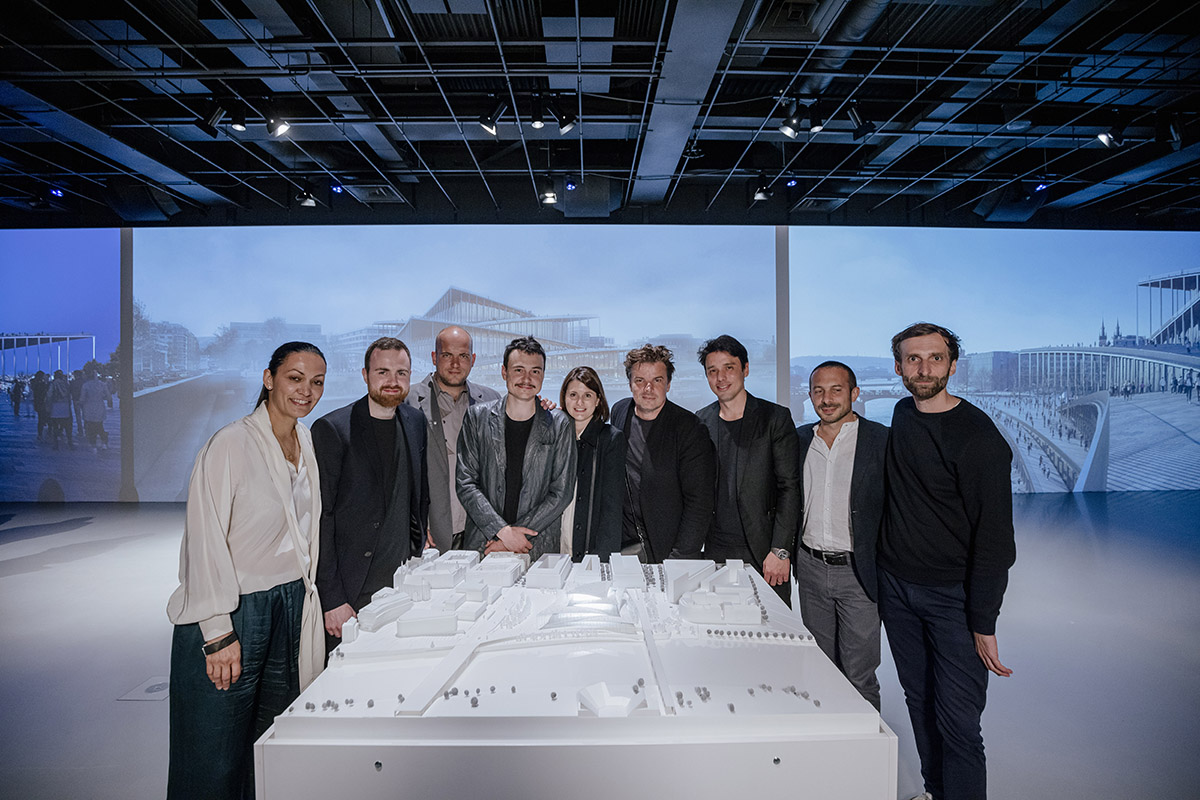 BIG team at the official ceremony at the Center for Architecture and Metropolitan Planning (CAMP). Image courtesy of the Vltava Philharmonic Hall

"The building itself will be accessible from all directions and levels"

"Many aspects had to be taken into account when selecting the winning design. The site for the philharmonic hall currently complicates the opportunity for people to meet instead of encouraging it, so the emphasis was not only on the architecture and operation of the building, but also on the design of the public spaces in the surrounding area," said Michal Sedláček, chairman of the competition’s jury.

"The Vltava Philharmonic Hall will become a vibrant center of life in Vltavská street – a new city park will stretch eastwards from the building, the south side will open up access to the water, a square will be created on the west side and there will be a view of the new Bubny-Zátory district to the north."

"The building itself will be accessible from all directions and levels," Sedláček added. 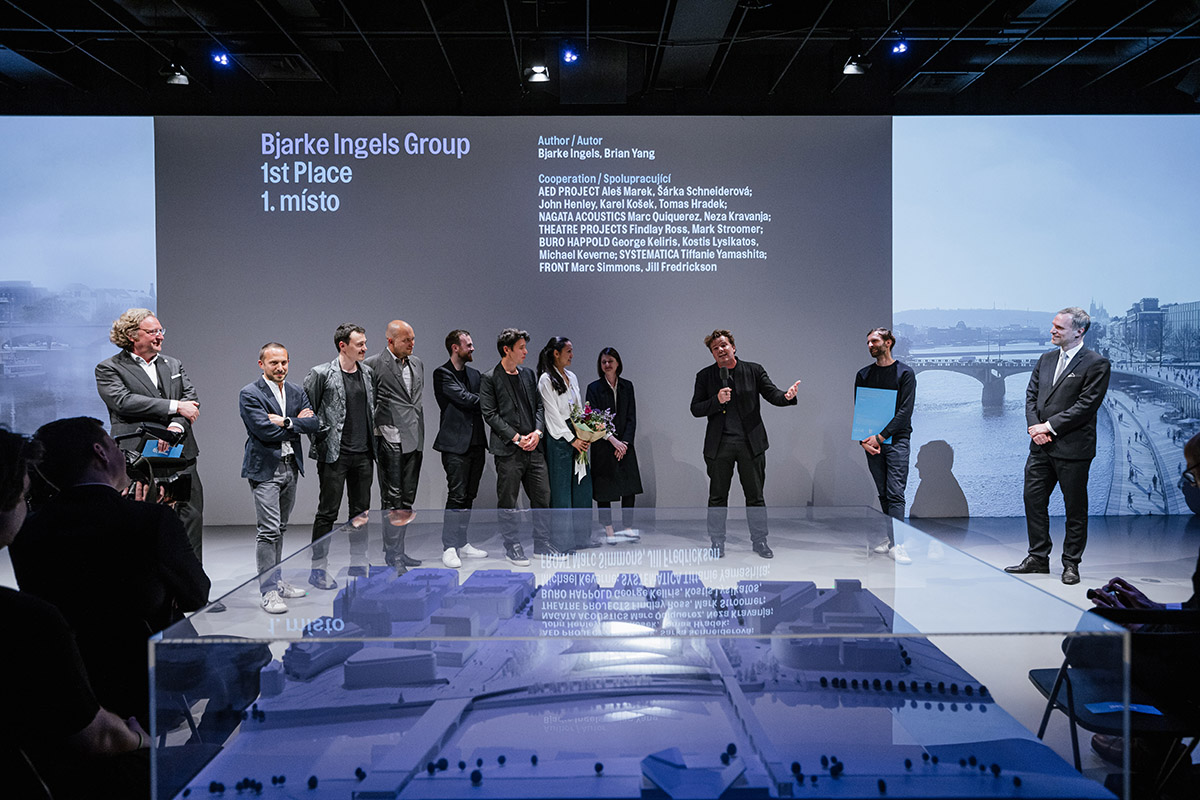 BIG team at the official ceremony at the Center for Architecture and Metropolitan Planning (CAMP). Image courtesy of the Vltava Philharmonic Hall

The ambition of the Vltava Philharmonic Hall was to attract not only classical music fans, but also the general public, according to a press statement of the competition.

BIG's design comprises the construction of three halls: the Prague Symphony Orchestra, the Czech Philharmonic and the music department and the creative hub of the Municipal Library of Prague. Visitors will be able to look forward to a café or rooftop restaurant, and many will certainly take advantage of the educational activities on offer.

In the case of the Vltava Philharmonic, the roof will be a continuation of the public space of the square. The undulating stepped form of the roofs will allow visitors to meander to the summit of the building, as if climbing a hill.

Slender vertical colonnades support the building’s roof terraces while undersides of warm timber from the Bohemian Forest provide shade and shelter. The project provides a space to sit and to gather, spaces for informal outdoor performances and views inward to the Philharmonic’s lively musical environment. 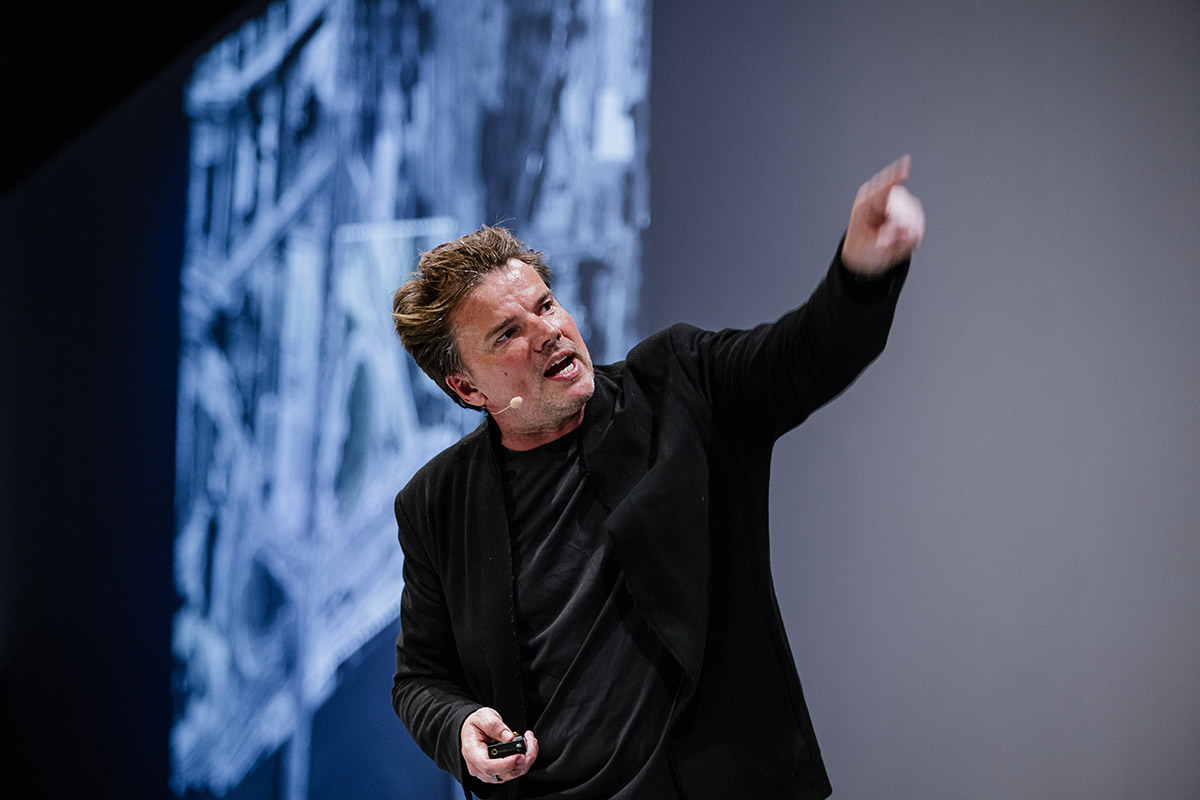 "A meandering journey from riverbank to rooftop"

"The Vltava Philharmonic Hall is composed as a meandering journey from riverbank to rooftop," said Bjarke Ingels, Founder & Partner, BIG.

"Public flows and belvedere plazas unite the city life of Prague to the music within. Its halls are formed for sight, fine-tuned for sound, and orchestrated for functionality and connectivity."

"From this rhythmic structure, a symphony of colonnades and balconies extend as platforms for public life. Expressive yet pragmatic, the new Philharmonic will ascend to form a key landmark for Prague - from river to roof," Ingels added.

Conceived as a contemporary extension of Prague's dramatic urban topography, the music hall is envisioned as "a cascade of outdoor destinations from the waterfront on the river to the city's iconic skyline." 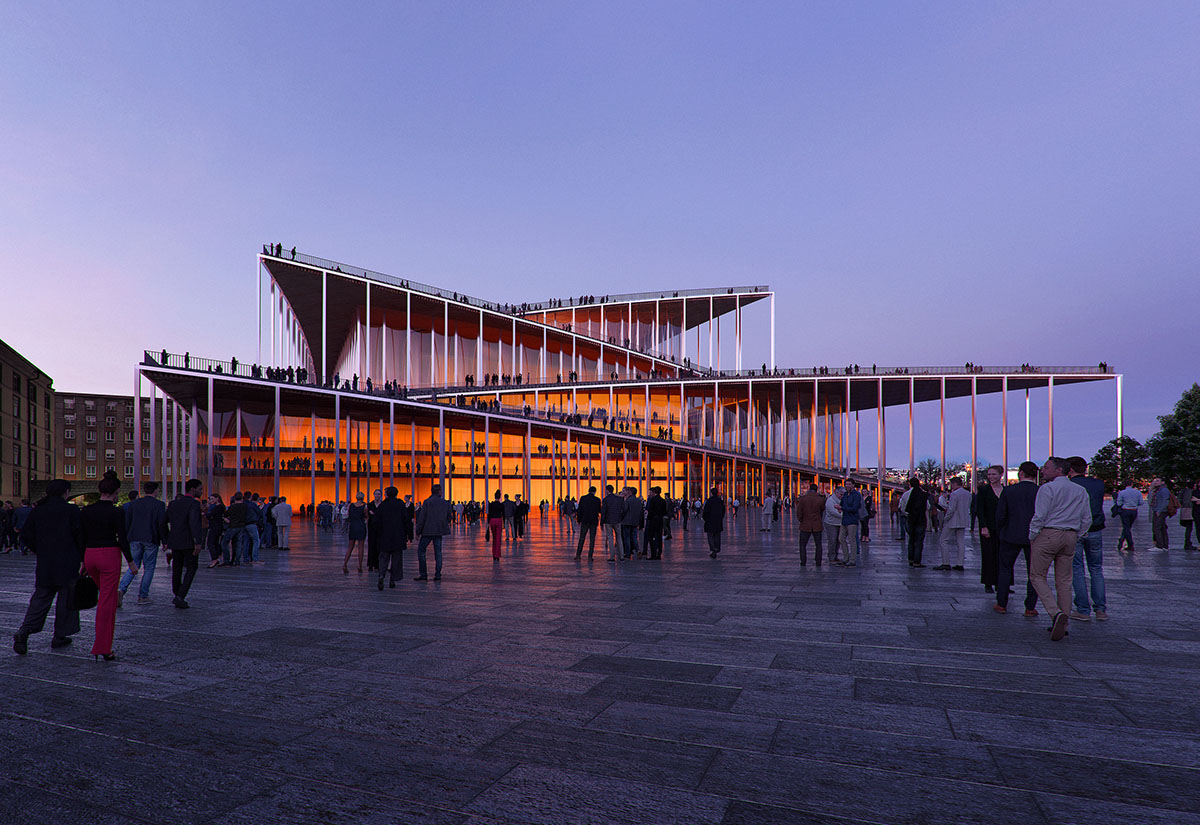 BIG raises and lowers the corners of the building at multiple touch points, the public spaces connect and allow activities to spill in and out of the building on every side: towards the river, the square, the street, and the alley.

Visitors are invited to the building in from all forms of arrival, with carefully chosen programs inviting them to explore the music venues inside or climb the elegant, arced roofs of the Hall.

The project is led by Bjarke Ingels and Brian Yang, Partner in Charge, BIG. "The new Vltava Philharmonic Hall will be a symbol of openness, accessibility, and exploration. From the Vltava square, streets ascend upward connecting interior balconies with exterior colonnades and terraces," said Brian Yang, Partner in Charge, BIG.

"Like eighth, quarter, half and whole notes, the steps the benches, façade, and colonnade are perfectly on beat offering its resident orchestras effective and extroverted rehearsal areas, while bringing the audiences within the halls closer to the source in an environment that is both majestic and intimate," Yang added.

Beyond being a major cultural destination for Prague, the building is designed to maximize its potential to host external uses and special events. The venues are carefully designed to maximize flexibility for a range of uses - from the boldness of contemporary music styles to theater performances and digital exhibitions.

At the top of the building, an elegant hyperbolic structure spans over the Vltava Hall and forms the iconic ceiling of restaurant and event ballroom framing views of the historic city center of Prague and becoming a major destination for social gatherings of all kinds. 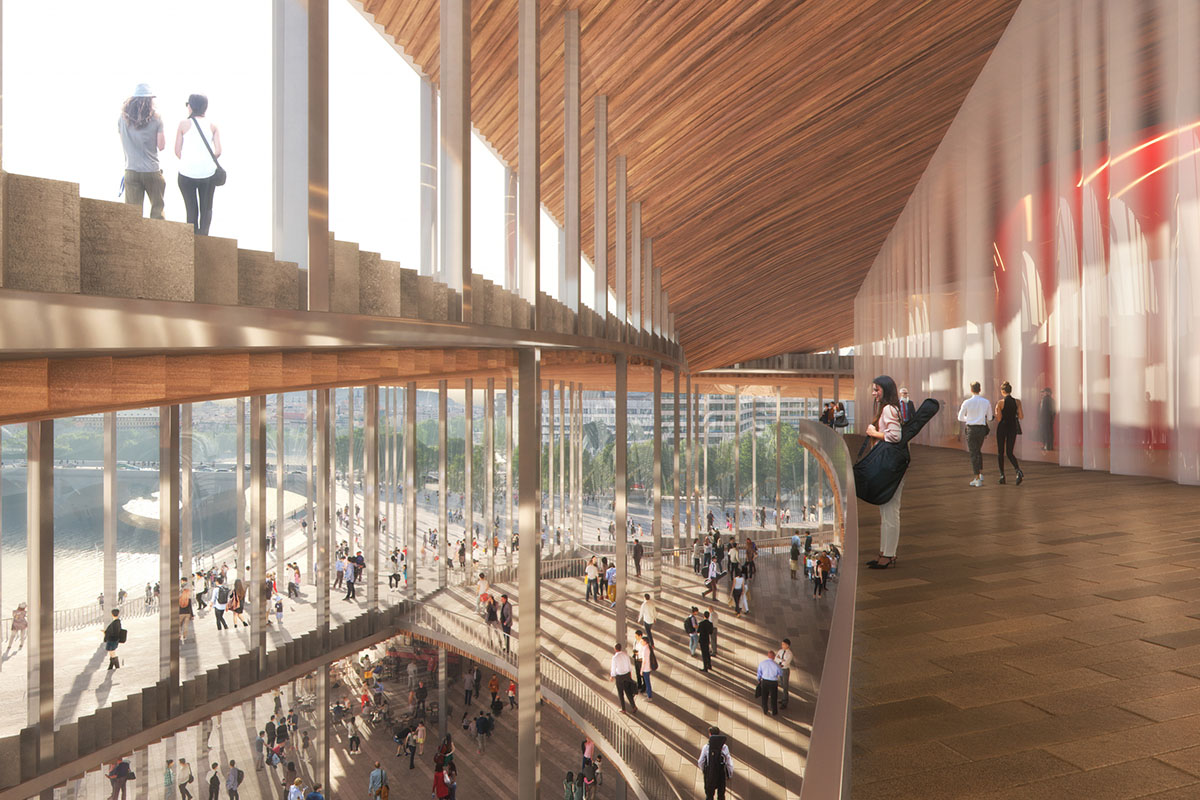 Inside, BIG takes references from the sources of the Vltava River. The wooden ceilings will be used from the exterior to the interior, symbolically highlighting the theme of the Vltava Philharmonic Hall's openness to its surroundings.

Arriving in the grand foyer, guests are welcomed by a striking interior inspired by Czech Glass Artists which lead them into the music venues – the more versatile Prague and Holešovice Halls or the main concert venue The Vltava Hall - which will bring a truly contemporary music experience to Prague.

Glass is another element that wraps the whole structure. It references to the typical architectural façades of buildings in the Czech Republic. 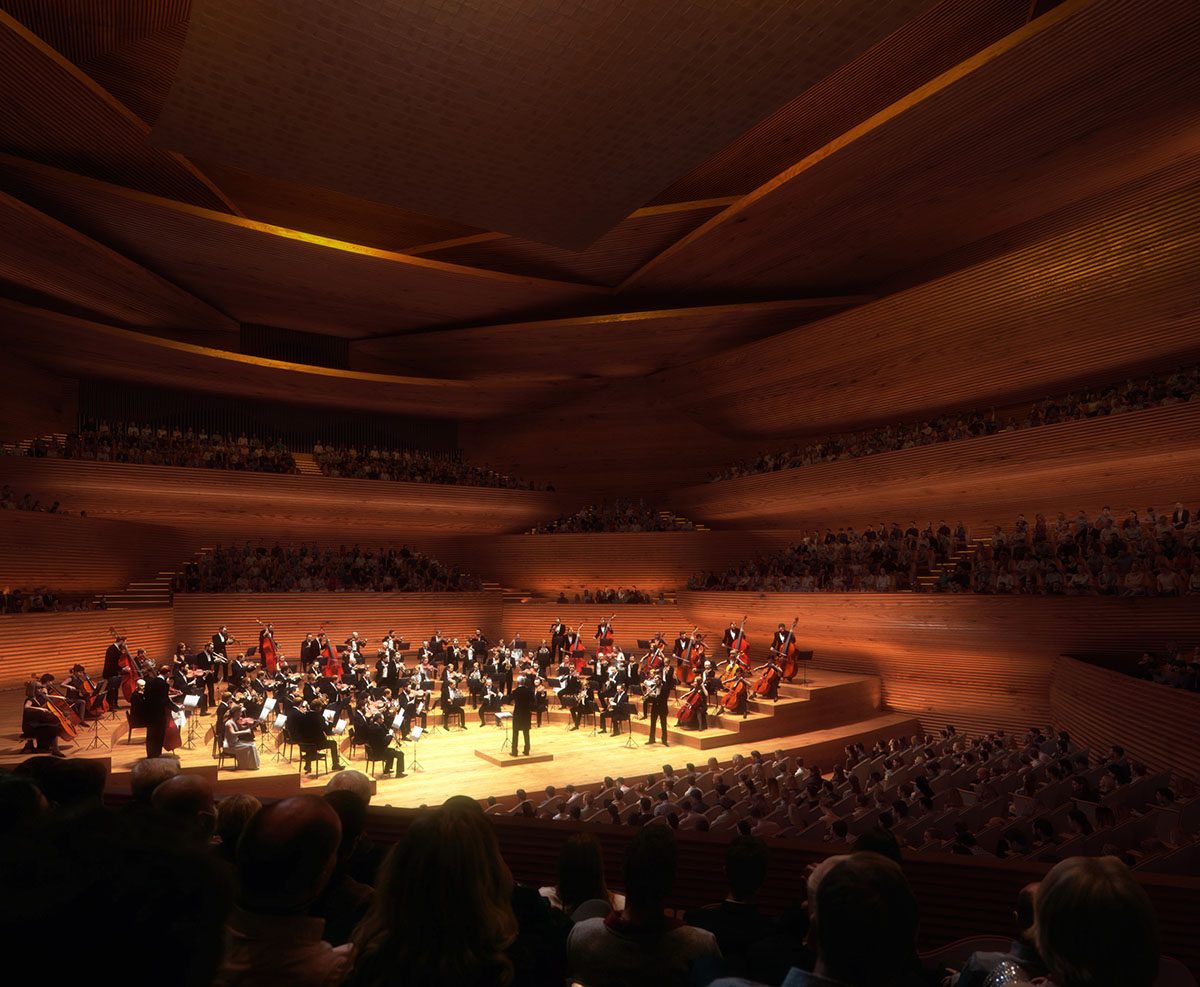 Arranged like petals of a pinecone turned inside out, the seats of Prague Hall are rotating within the compactness of a perfect square.

The seating rakes meet at their corners to allow physical connectivity between every seat in the audience, providing a greater sense of unity and shared experience.

Warm timber interiors provide balanced acoustics with a natural material, and form an environment designed to strengthen the intimate connection between the audience and orchestra. The organizing committee of the competition said: "Music schools of various levels will also be involved and will be able to use the Vltava Philharmonic Hall's facilities for their teaching." 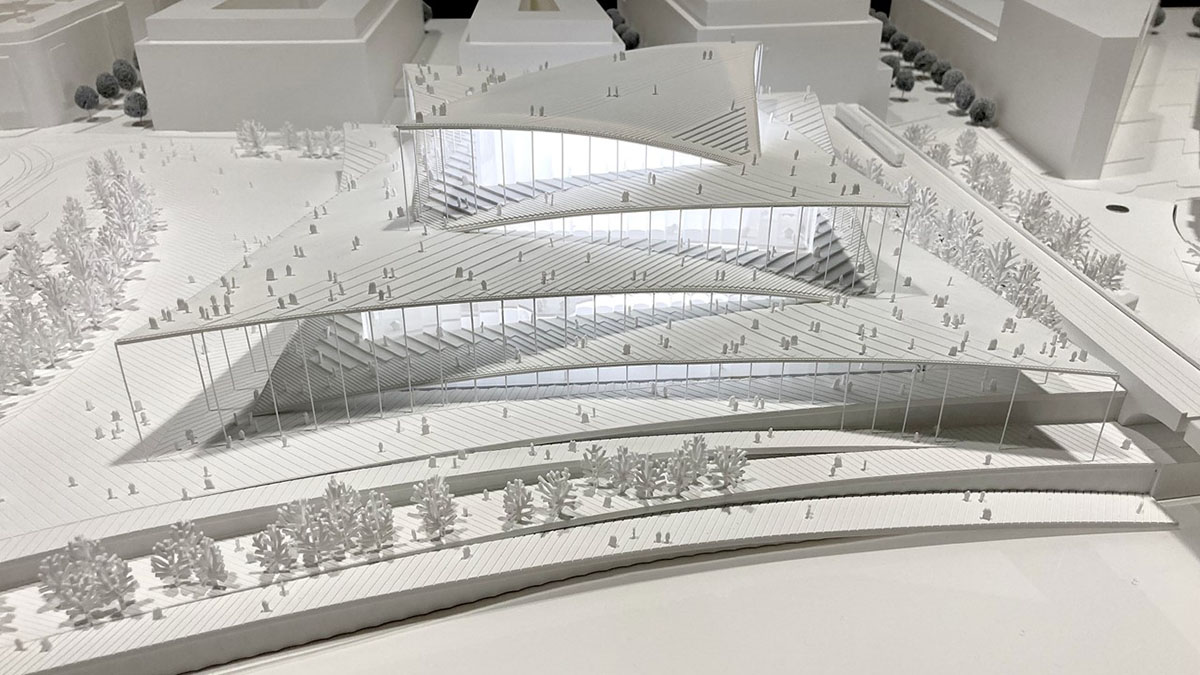 "Representatives of the Czech Philharmonic and the Prague Symphony Orchestra FOK, as well as the Municipal Library in Prague, participated in the preparation of the architectural competition brief and were invited to jury the competition, thus being able to comment on the needs of individual entities," the organizing committee added.

Construction work is expected to begin in 2027, and the new concert hall is scheduled to be completed in 2032.

> via BIG & The Vltava Philharmonic Hall