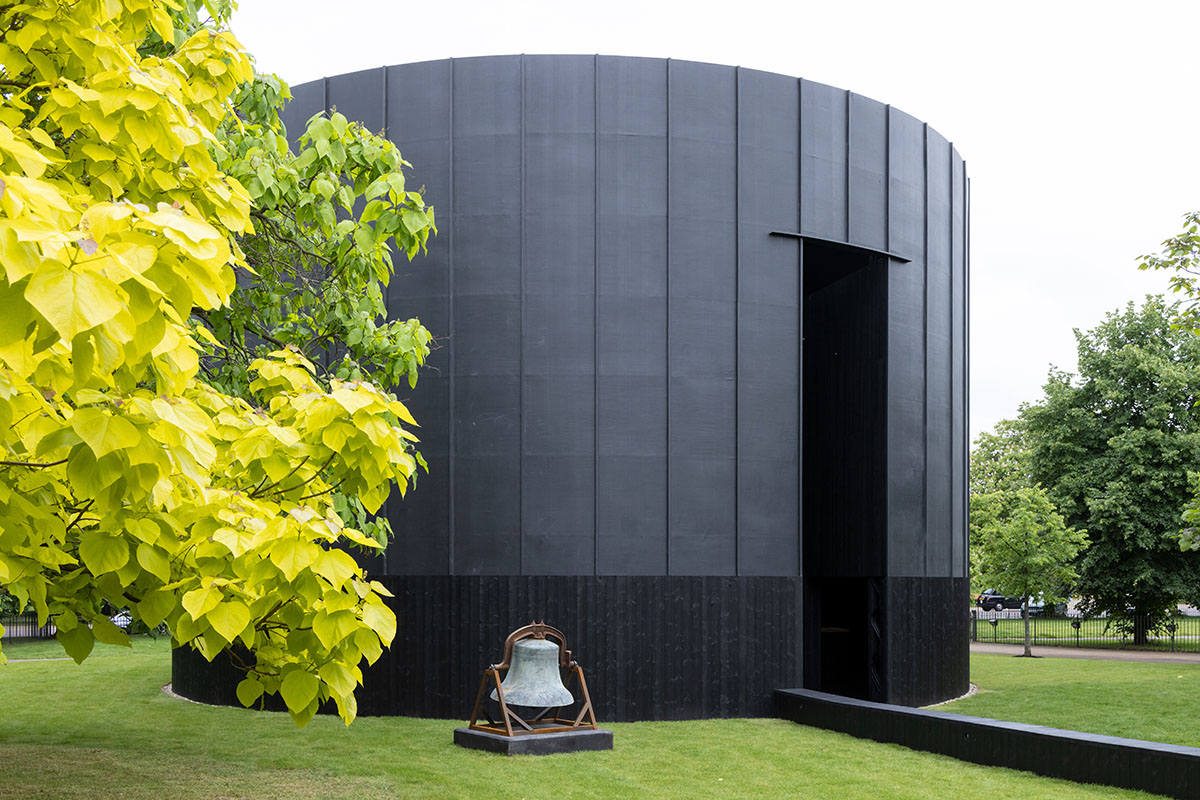 Chicago-based artist Theaster Gates has completed the 2022 Serpentine Pavilion in London's Kensington Gardens, which was realized with the architectural support of Adjaye Associates.

Called Black Chapel, the pavilion has been realized as the annual project for the eighth consecutive year of the Serpentine. The 21st Serpentine Pavilion is conceived as a space for gathering, meditation and participation to put an emphasis on sacred music.

Black Chapel will open to the public on 10 June and will offer a platform for Serpentine’s live programme throughout the summer and beyond, offering reflection, connection and joy to the public. The pavilion will be on view until 16 October, 2022.

To mark the opening of the Pavilion, Theaster Gates and Sir David Adjaye OBE will be in conversation with Hans Ulrich Obrist on 8 June 2022, which will explore their work in art, architecture, urbanism and space-making. 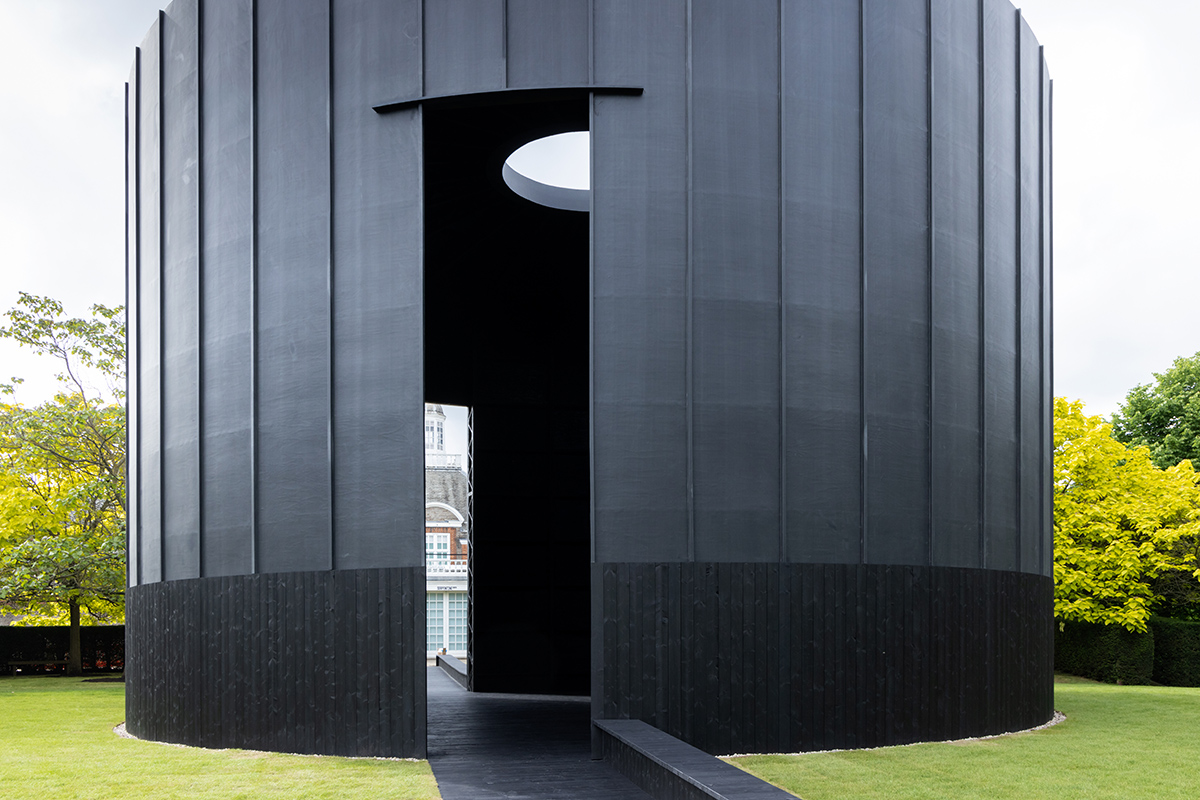 "The name Black Chapel is important because it reflects the invisible parts of my artistic practice. It acknowledges the role that sacred music and the sacred arts have had on my practice, and the collective quality of these emotional and communal initiatives," said Theaster Gates.

"Black Chapel also suggests that in these times there could be a space where one could rest from the pressures of the day and spend time in quietude."

"I have always wanted to build spaces that consider the power of sound and music as a healing mechanism and emotive force that allows people to enter a space of deep reflection and deep participation," Gates added.

The design of the pavilion takes inspiration from many of the architectural typologies that ground the artist’s practice.

With its circular geometry, the structure gives references to the bottle kilns of Stoke-on-Trent in England, the beehive kilns of the Western United States, San Pietro and the Roman tempiettos and traditional African building structures such as the Musgum mud huts of Cameroon and the Kasabi Tombs of Kampala, Uganda. 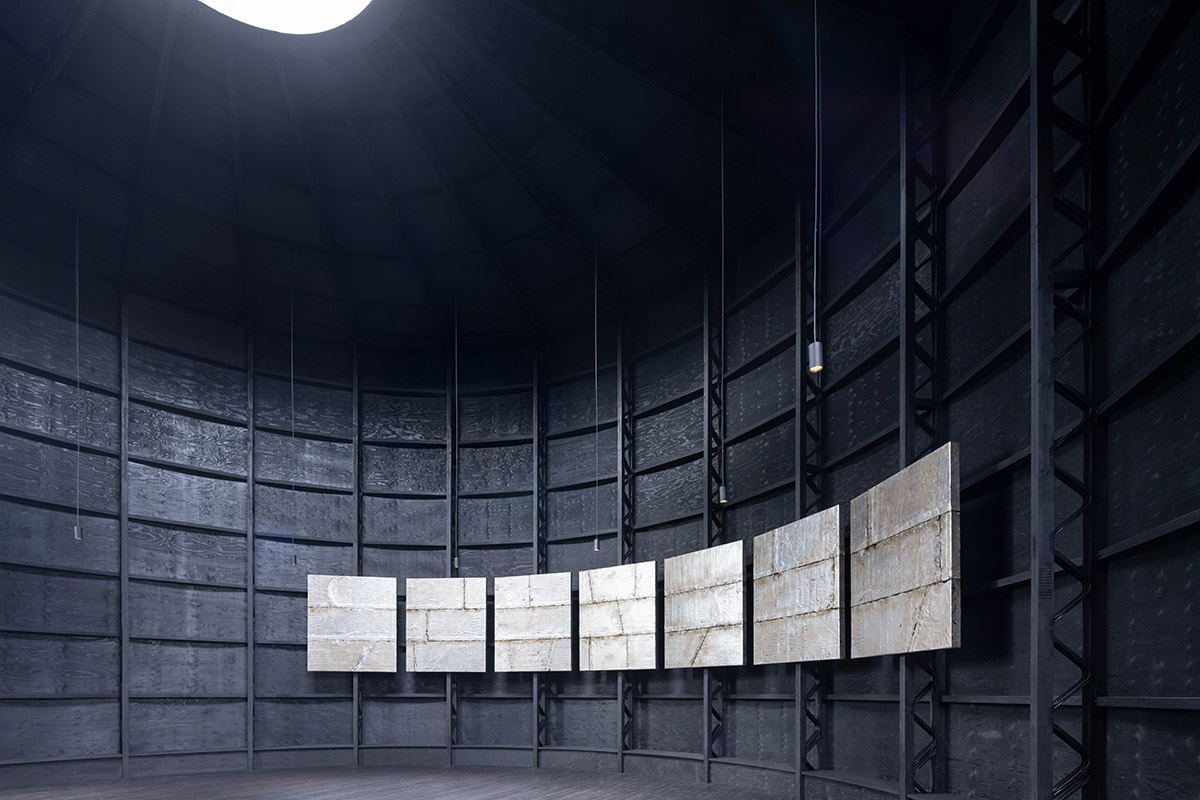 Drawn to the transcendental environment of the Rothko Chapel in Houston, Texas, Gates has also produced a series of new tar paintings especially for Black Chapel.

Determined to create a space that reflects the artist’s hand and sensibilities, seven panels are hanged from the interior structure.

In these works, Gates honours his father’s craft as a roofer and uses roofing strategies and torch down, which requires an open flame to heat the material and affix it to the surface.

Next to the pavilion, there is an operating bronze bell, salvaged from St. Laurence, a landmark Catholic Church that once stood in Chicago’s South Side, stands next to the entrance of the Pavilion.

Underscoring the erasure of spaces for convening and spiritual communion in urban communities, the historic bell acts as a call to assembly, congregation and contemplation throughout the summer’s events.

To reduce its carbon footprint and environment impact, the pavilion is designed in accordance with Serpentine’s sustainability policy. Occupying 201 square meters, the pavilion reaches at 10.7-metre height from ground level to roof apex and it has a diameter of 16 metres on plan.

With its over 10-metre-tall and 16-metre-diameter structure, the Serpentine Pavilion is the largest to date and has an emphasis on low carbon and reusable materials. Inside, the pavilion has a central oculus becoming a single source of light that floods into the space below.

The Pavilion is predominantly made of blackened structural timber clad in a plywood ‘stressed skin’ and/or timber boards stained and treated for external use.

The reason of this material is to create a light-weight and fully demountable structure, emphasizing a focus on sustainably sourced materials and provide the reusability of the structure as a whole after its time installed at Serpentine. 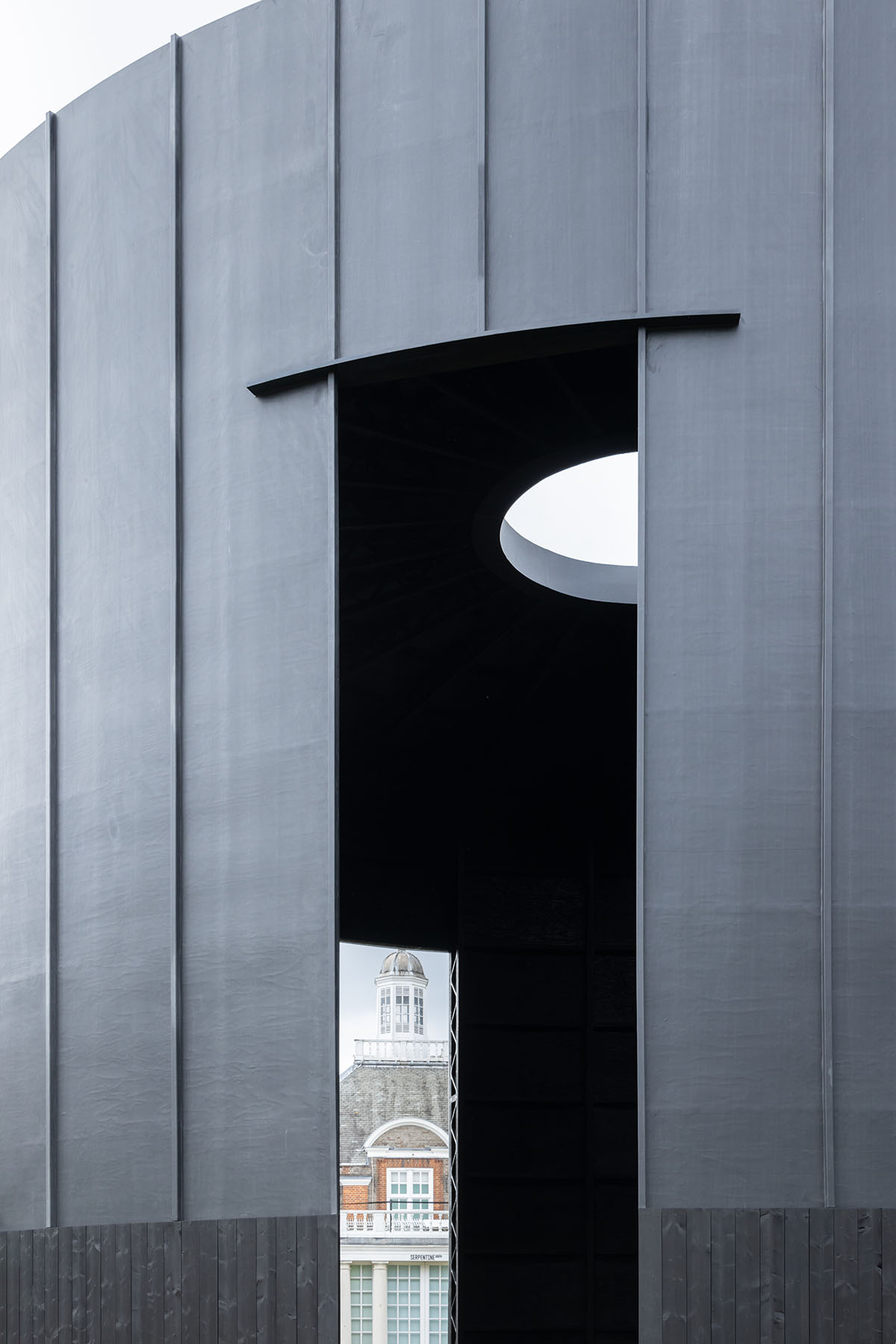 "It is a very low carbon structure"

"The Pavilion appears very simple from the outside, but looks can be deceptive," said Madalina Taylor, Senior Engineer, AECOM.

"Using light-weight timber technology at this scale has required careful analysis, research, mock-ups and physical testing to ensure it performs both at Serpentine and in its future life."

"With a focus on making the Pavilion entirely demountable, we’ve created a very low carbon structure that will host a diverse and exciting programme of summer events," Taylor added.

"The entire superstructure, including the timber-framed walls, roof and suspended floor, along with its small, low-cement foundations, is fully demountable using simple bolts and screws, and the structure’s rubber waterproofing membrane can be easily separated from the timber frame and reused or recycled," explained AECOM in its statement.

"This approach results in a very low upfront carbon footprint for the build and allows the Pavilion to be completely rebuilt in a new location after its first life in Kensington Gardens."

After the installation period ends in London's Kensington Gardens, it will be relocated to a permanent location in the future.

The Pavilion features three large openings, one in the roof and two in the external walls, as well as an internal dividing wall also predominantly made up of timber construction. There are two paths linking the Pavilion to the existing footpaths. 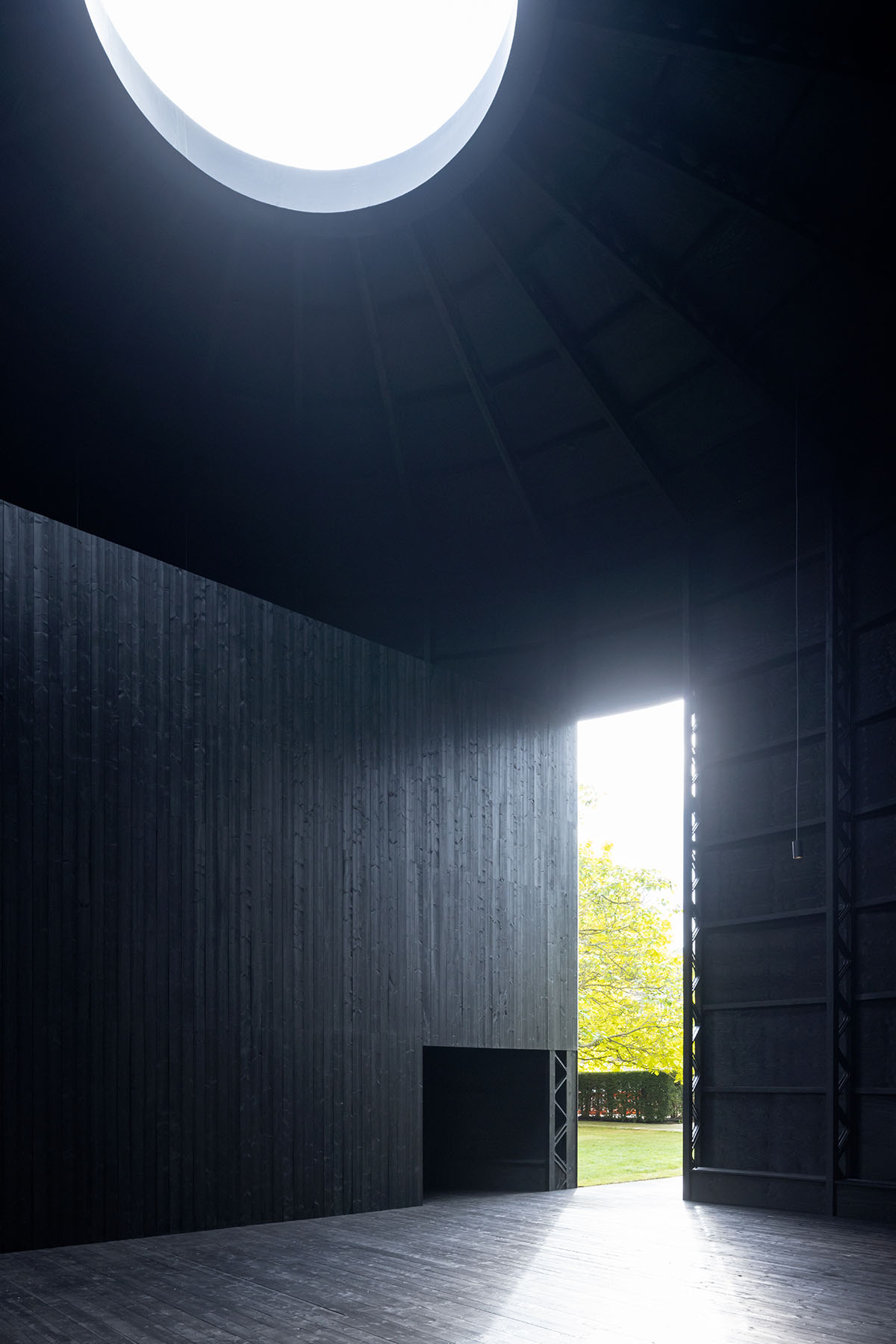 Each summer the Serpentine invites an internationally renowned or emerging architect to create their first completed structure in England.