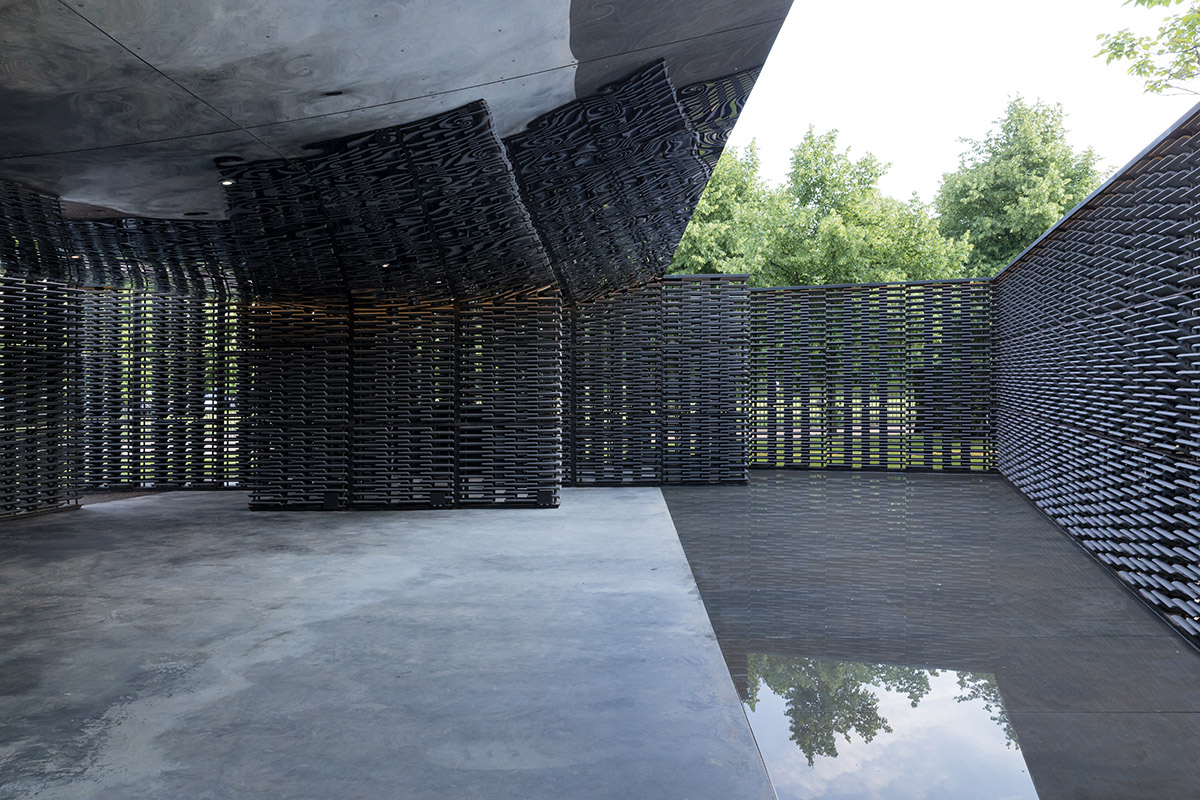 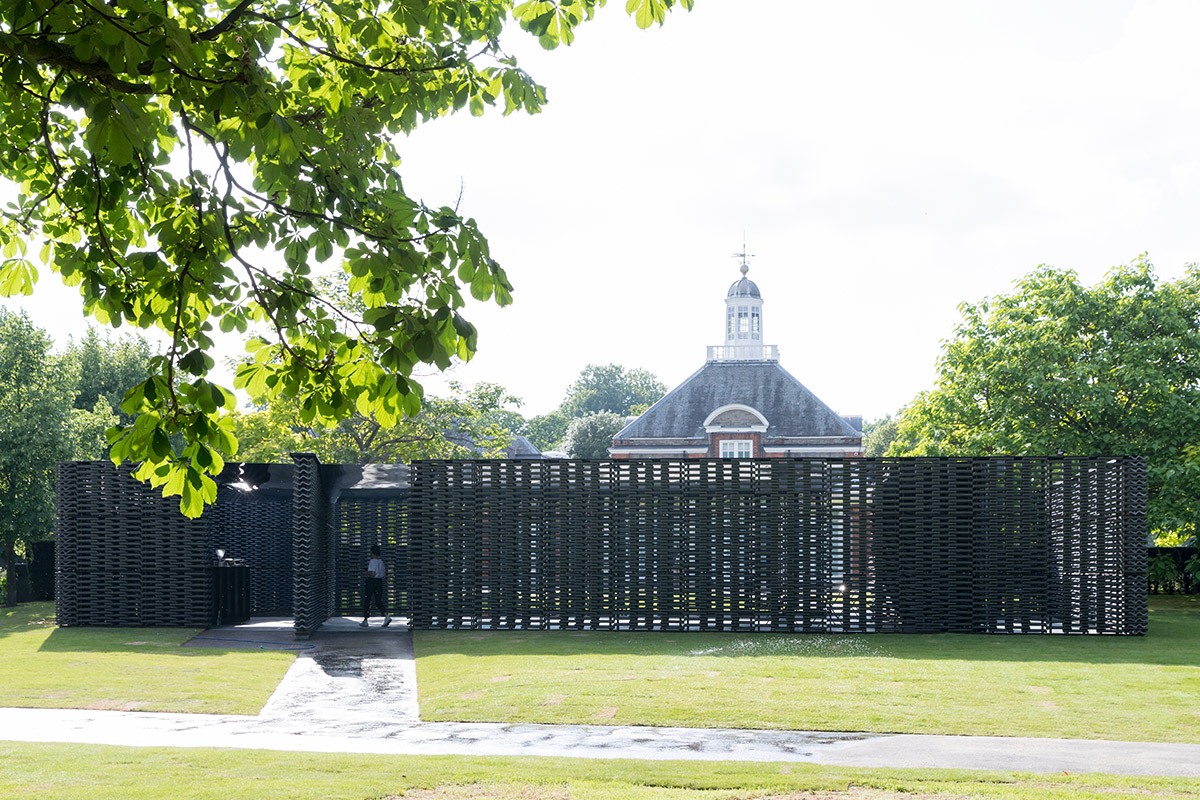 "Internal courtyards are a common feature of Mexican domestic architecture, while the Pavilion’s pivoted axis refers to the Prime Meridian, which was established in 1851 at Greenwich and became the global standard marker of time and geographical distance," said in a statement. 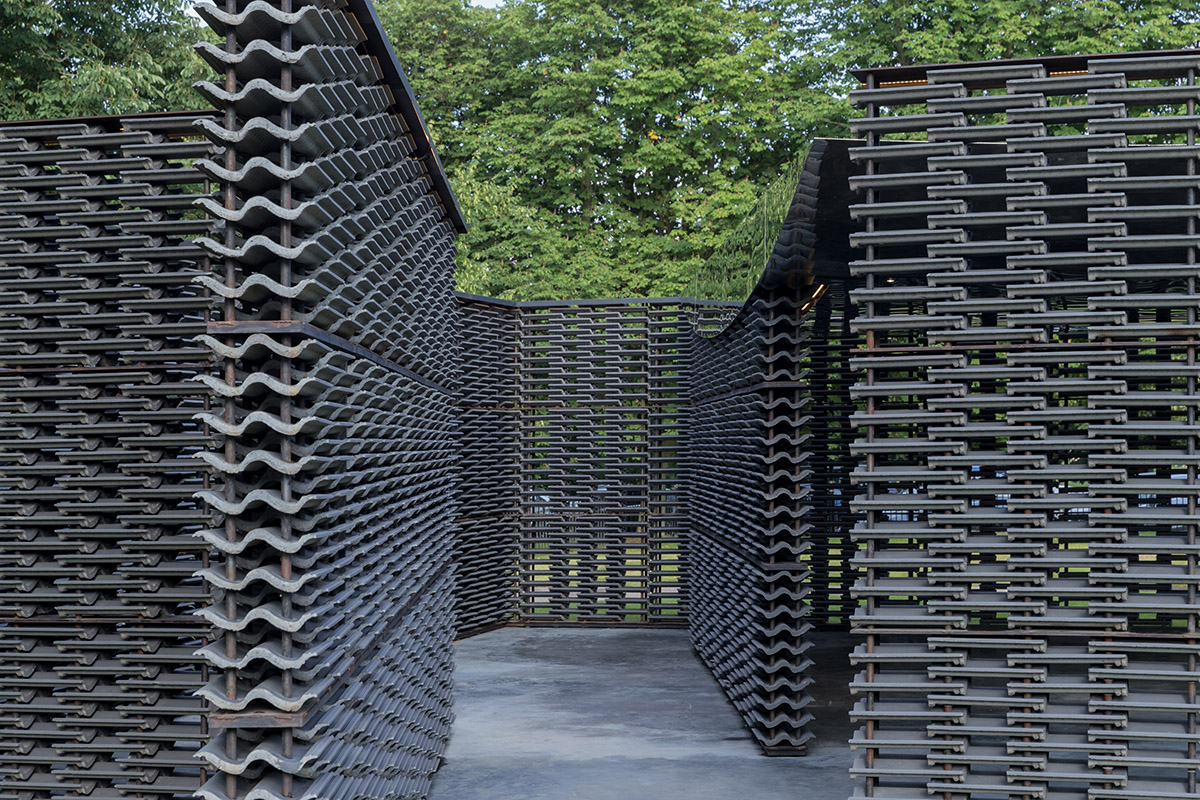 The architect used British-made materials in the Pavilion’s construction, by choosing dark colours and textured surfaces. "A celosia – a traditional breeze wall also common to Mexican architecture – will be here composed of a lattice of cement roof tiles that diffuse the view out into the park, transforming it into a vibrant blur of greens and blues from within," read the press release.

Escobedo used two reflecting elements to emphasise the movement of light and shadow inside the Pavilion over the course of the day. The curved underside of the canopy is clad with mirrored panels, and a triangular pool cast into the Pavilion floor traces its boundary directly beneath the edge of the roof, along the north axis of the Meridian. 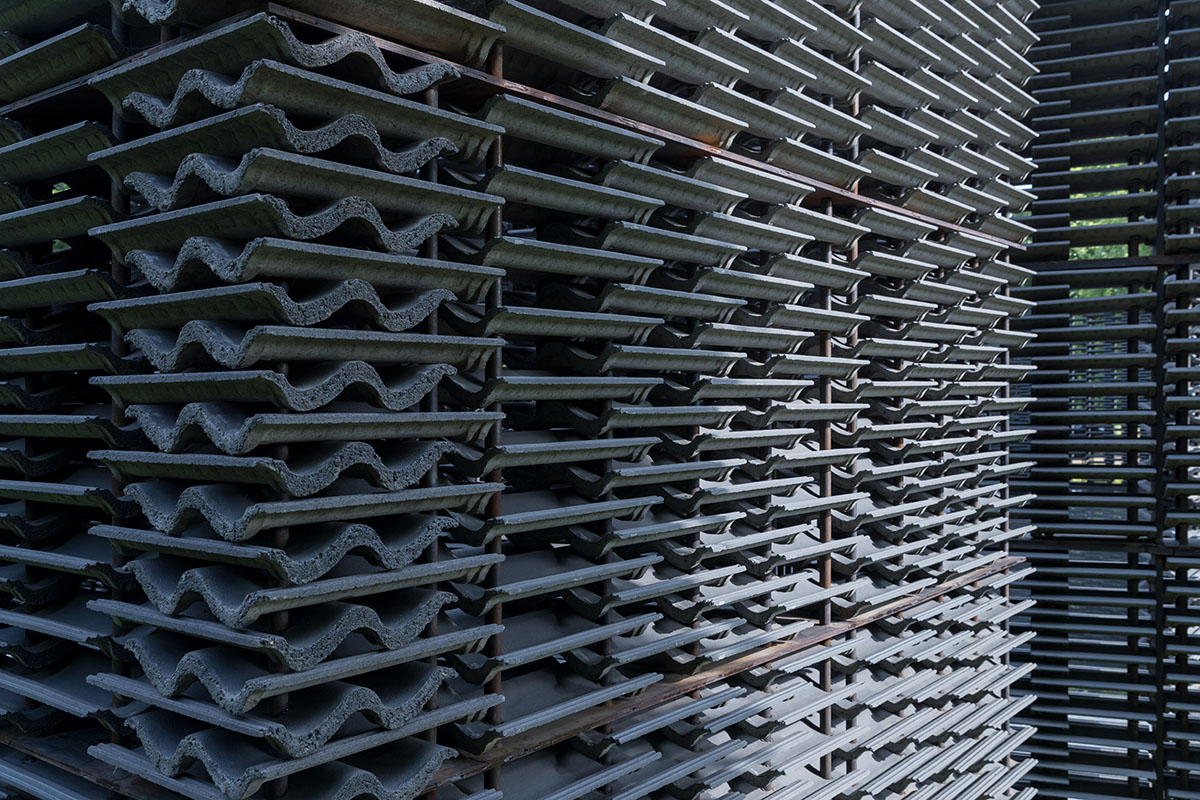 As the sun moves across the sky, reflected and refracted by these features, visitors may feel a heightened awareness of time spent in play, improvisation and contemplation over the summer months. 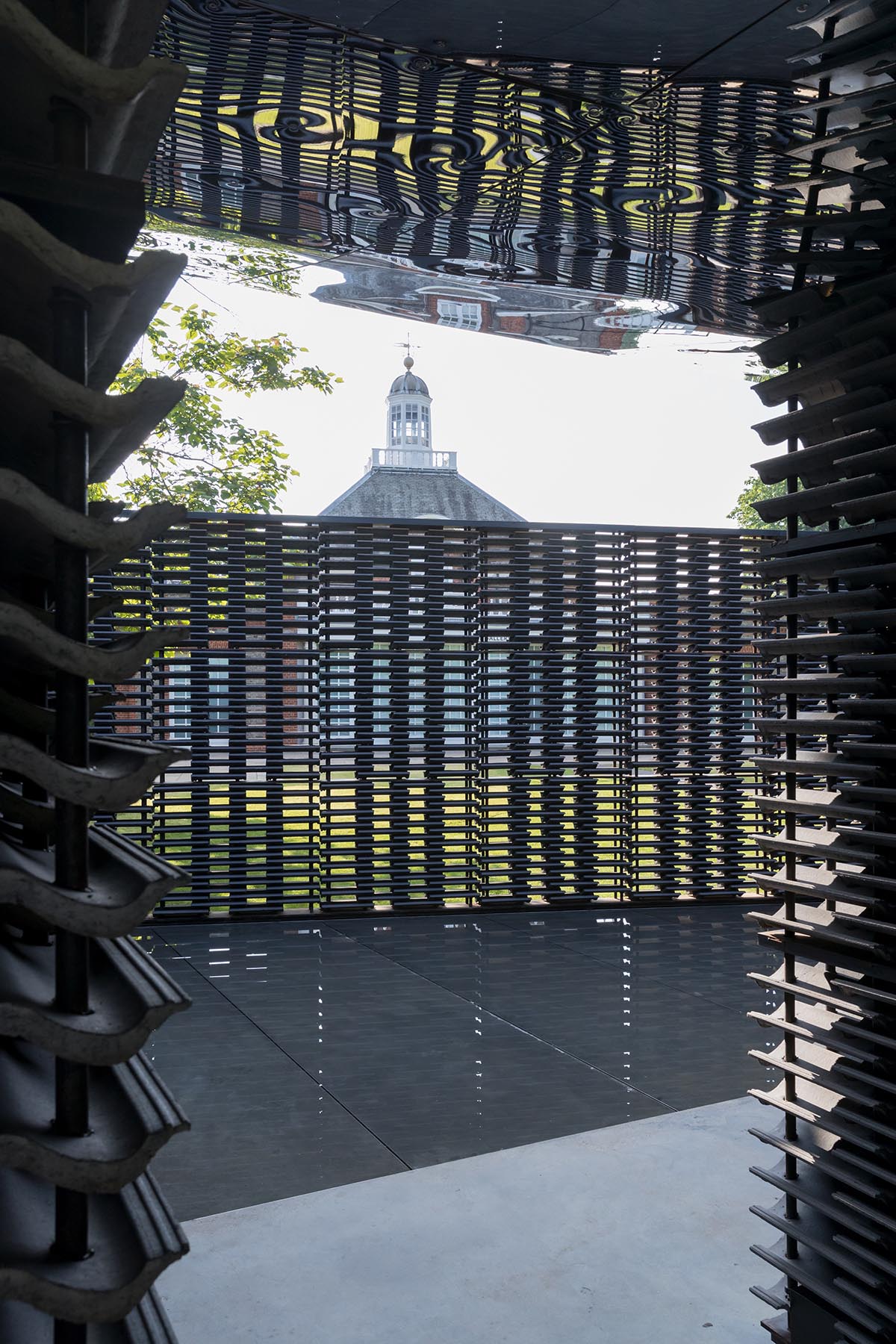 "The design for the Serpentine Pavilion 2018 is a meeting of material and historical inspirations inseparable from the city of London itself and an idea which has been central to our practice from the beginning: the expression of time in architecture through inventive use of everyday materials and simple forms," said Frida Escobedo in her statement.

"For the Serpentine Pavilion, we have added the materials of light and shadow, reflection and refraction, turning the building into a timepiece that charts the passage of the day." 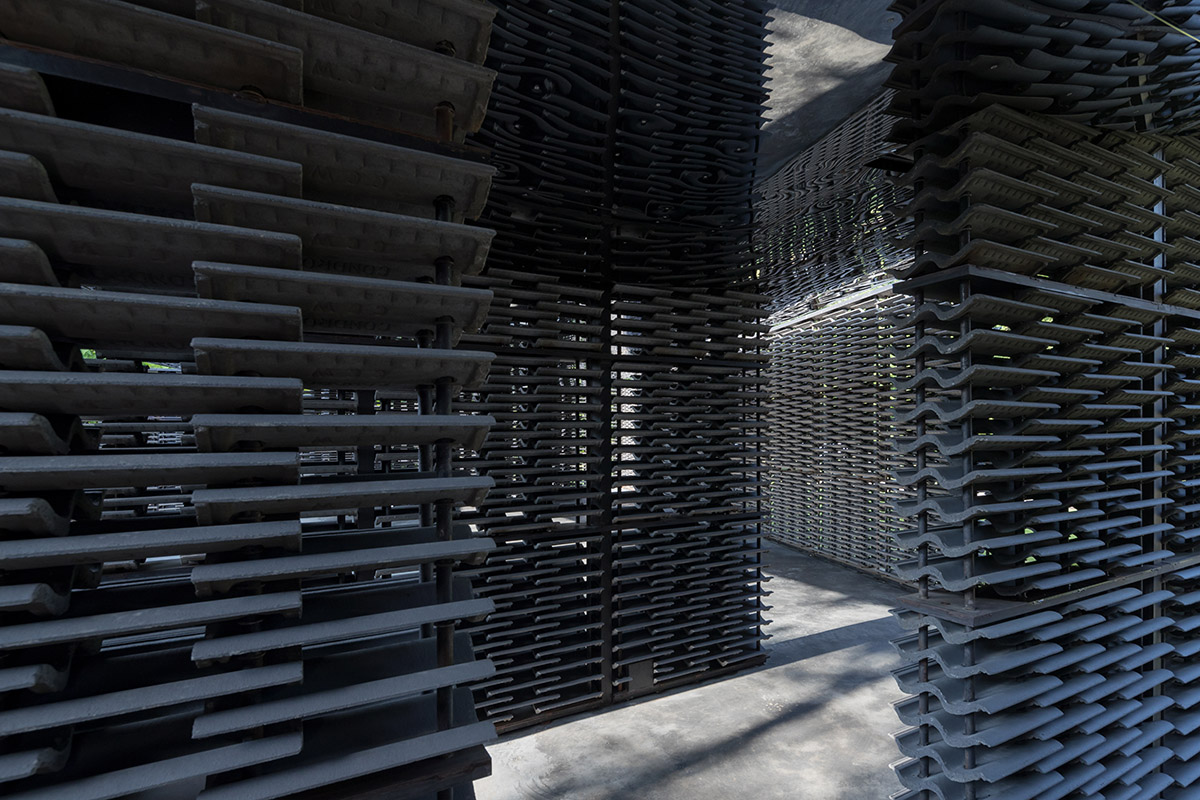 Escobedo’s prize-winning work in urban reactivation ranges from housing and community centres to hotels and galleries. In 2006, she founded her practice in Mexico City, with significant national projects including the Librería del Fondo Octavio Paz and an extension of La Tallera Siqueiros gallery in Cuernavaca. 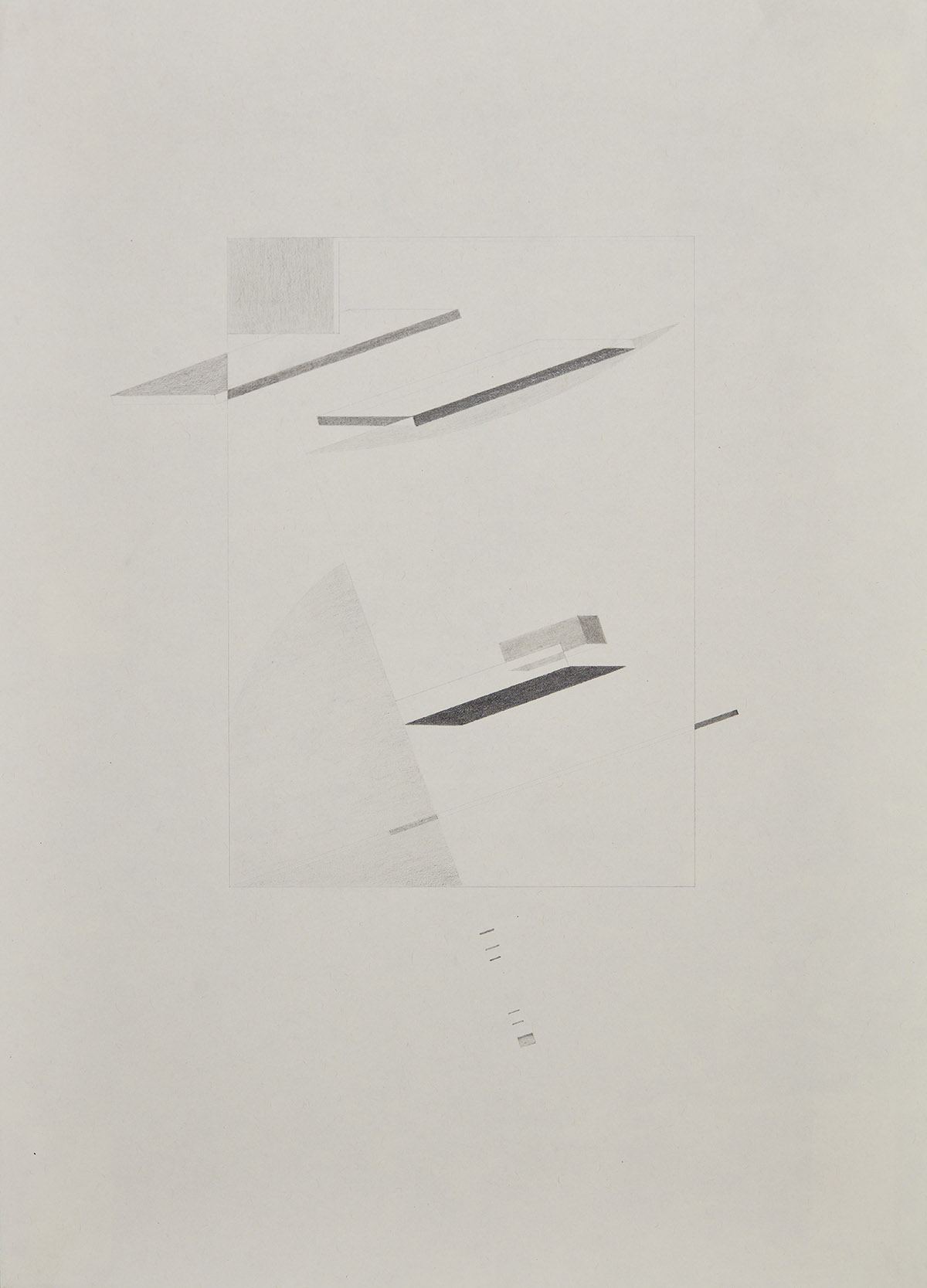 Her designs have featured at the Venice Architecture Biennale (2012 and 2014), the Lisbon Architecture Triennale (2013), and in San Francisco, London and New York. Recent projects include Stanford University’s Graduate School of Business and social housing projects in Guerrero and Saltillo, Mexico. She lectures nationally and internationally, and has won multiple awards and accolades.

The Serpentine Galleries' pioneering commission began in 2000 with Zaha Hadid, has presented the first UK buildings of some of the biggest names in international architecture. In recent years, it has grown into a hotly anticipated showcase for emerging talent, from Sou Fujimoto of Japan to Selgascano of Spain and Bjarke Ingels of Denmark. Last year, Francis Kéré designed a tree-inspired Serpentine Pavilion.