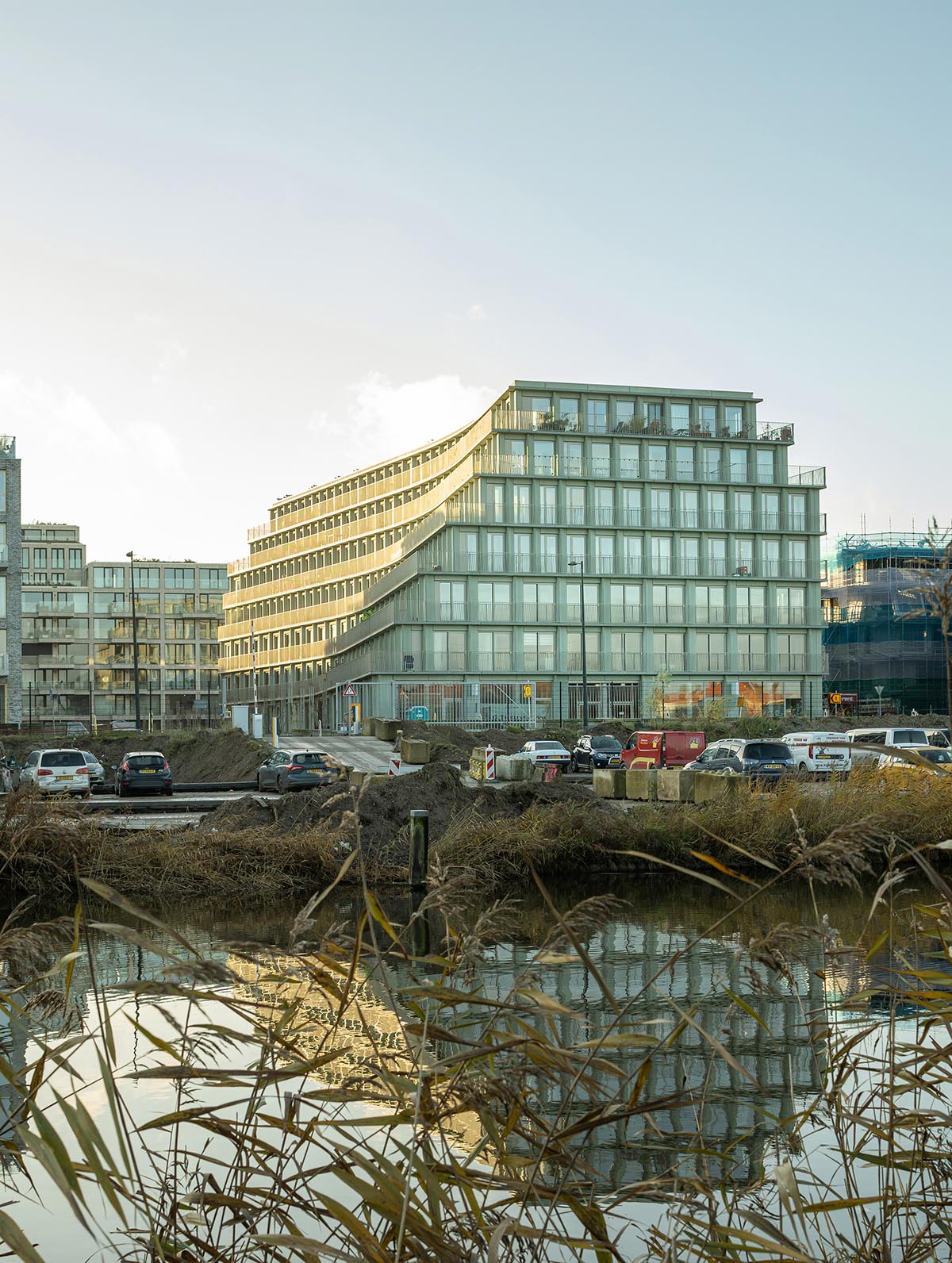 The new complex, offering 135 studio apartments, is located in the Manhattan at the IJ, a new city district where the IJ harbour sits in the opposite side of Central Station. 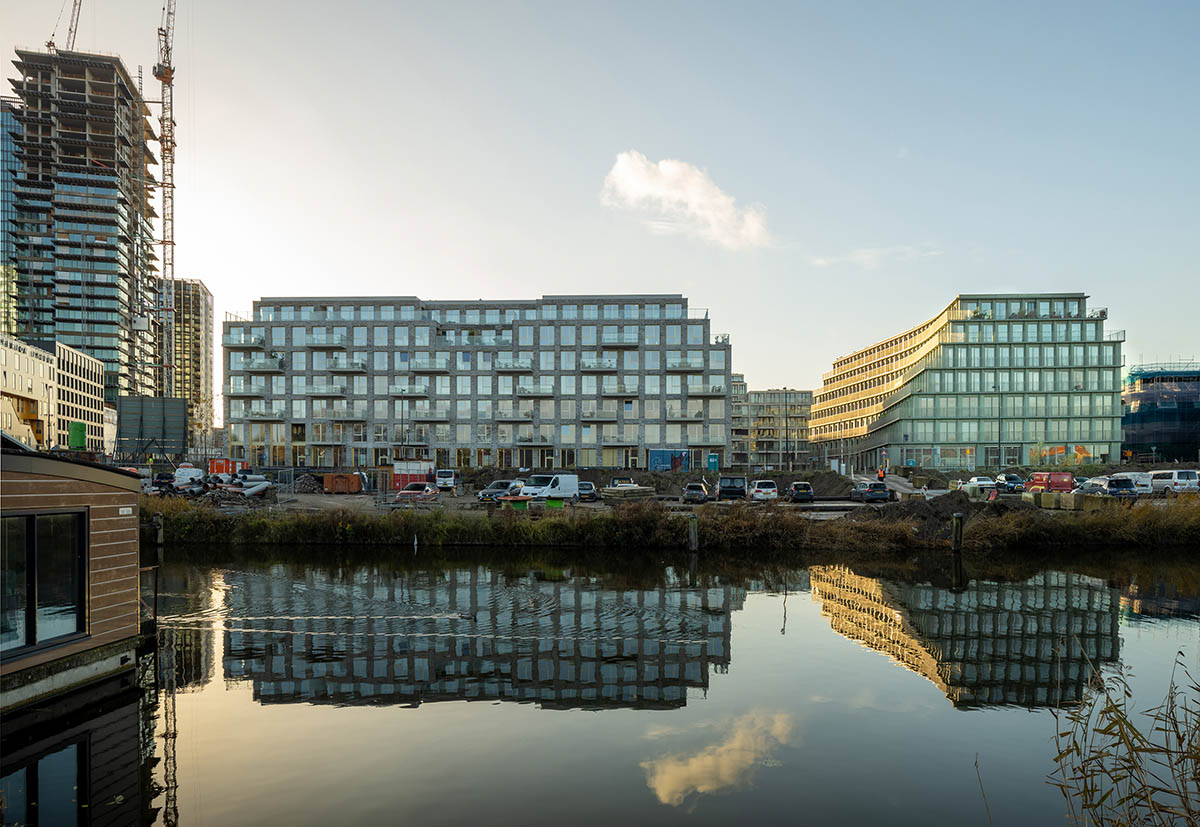 Studioninedots' De Jakoba, covering 10,0000-square-metre area, was realized as one of two new social housing complexes as part of a larger development plans.

The studio used created this sculptural form by using smart building methods, and realised a powerful and qualitative building.

The goal of the studio studio was to make the social housing "a recognisable place where people live with pride and are willing to take care of." 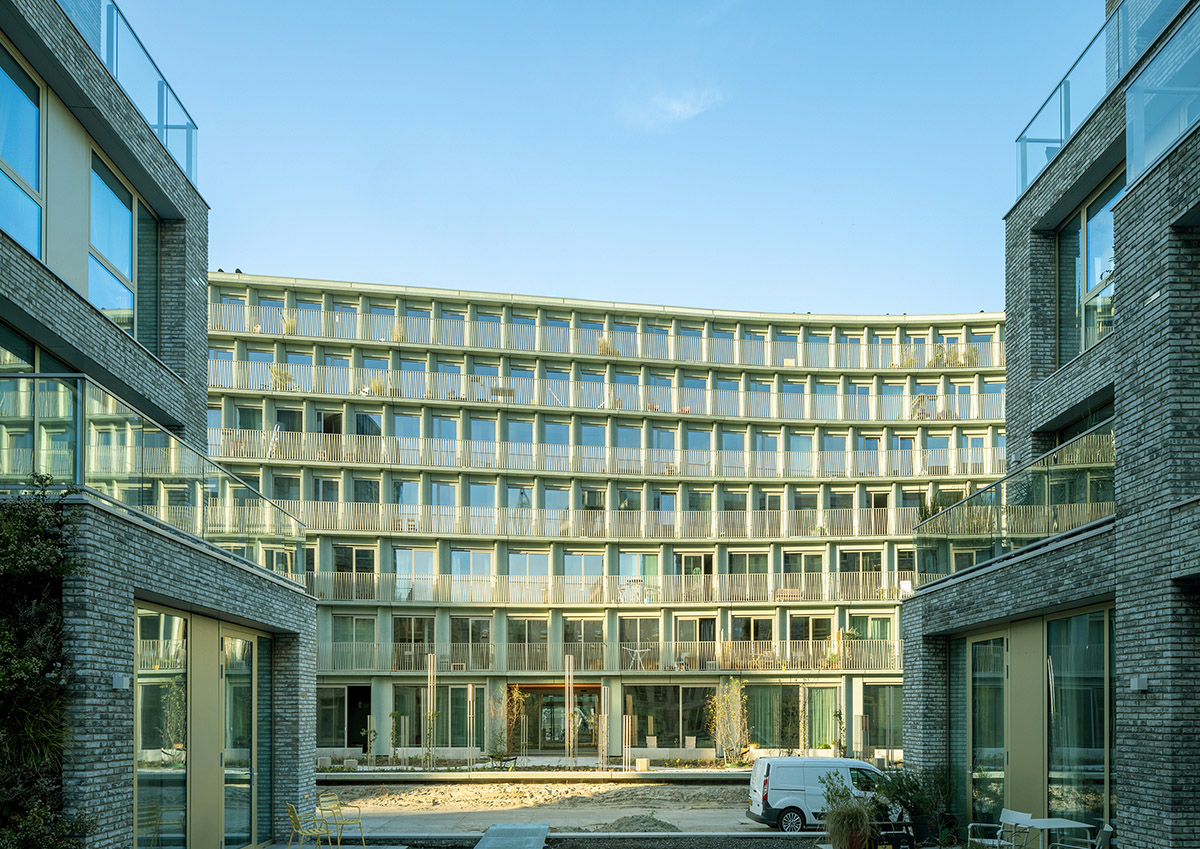 "Within the formal urban plan for the Overhoeks area – which with its ‘campus-like’ setting is rather un-Amsterdam – we gave our own interpretation of the set rules," said Studioninedots.

"The plan specified setbacks for the buildings to minimise the volumes from street level."

"We took advantage of this condition by bending the entire volume of De Jakoba inwards, allowing the volume to stagger and gradually curve upwards not only on the top floors, but over its entire height and length," the studio added. 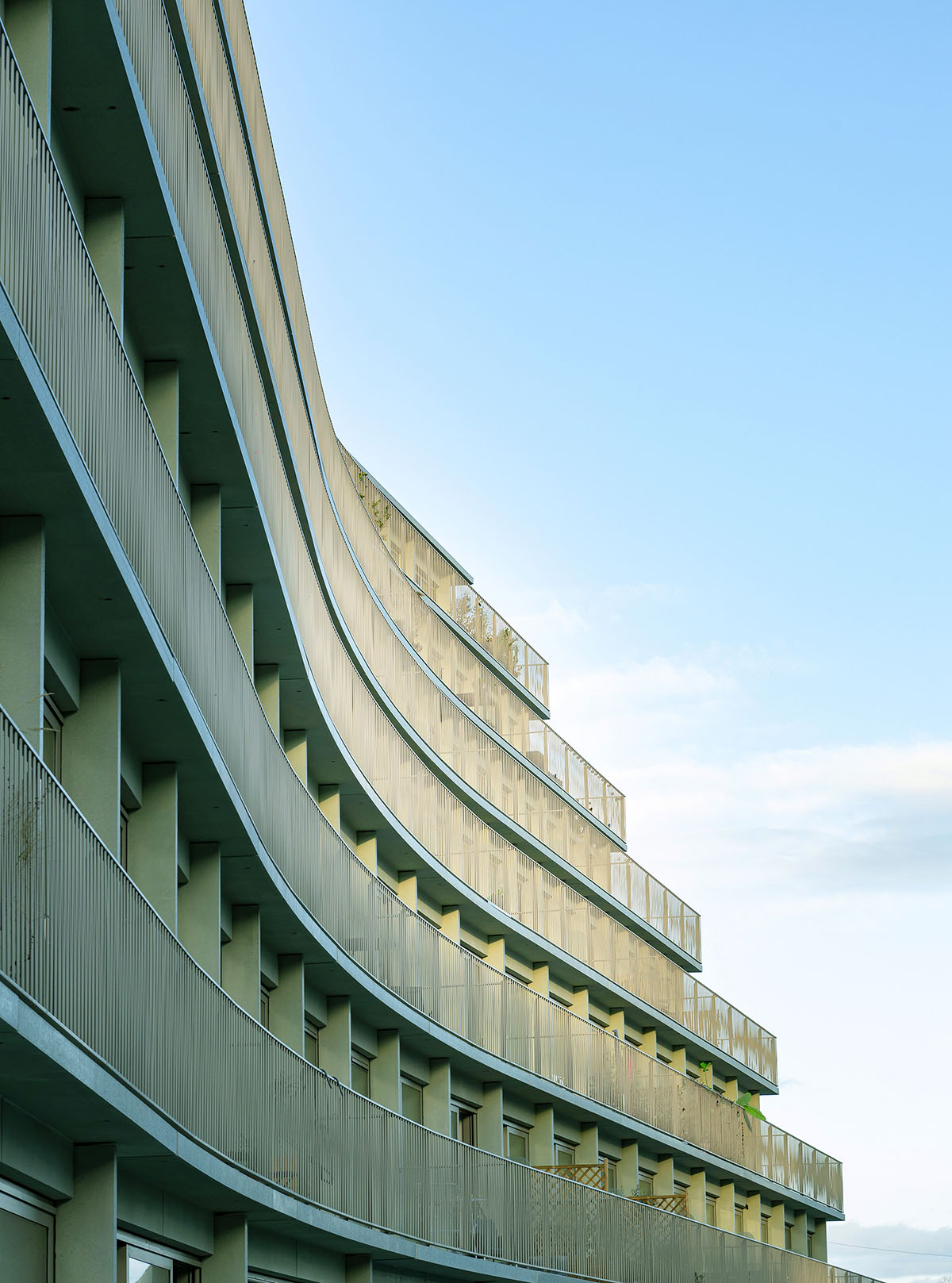 The intention was to make a recognisable appearance in the surrounding area, and according to the studio, the elegantly-designed four different facades featuring wavy balconies build this image in the neignborhood.

"With De Jakoba, we committed to one gesture that simultaneously obeys and disrupts the rules," said Vincent van der Klei, partner at Studioninedots.

Due to the sculptural volume of the building, each of 135 apartments has a unique layout. At the heart, which makes up the narrowest part of the building, is the entrance passage that connects the communal garden to the street. 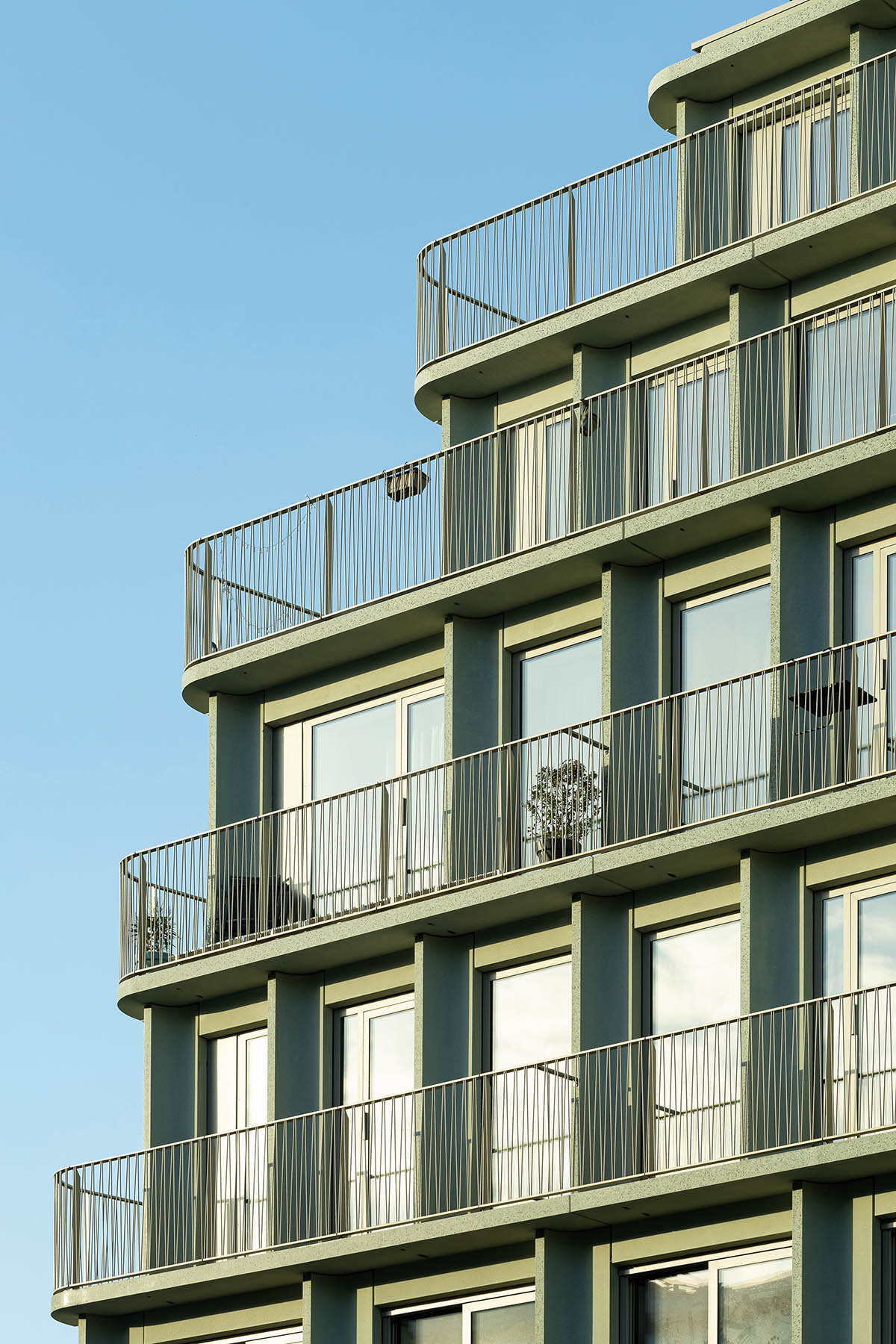 As the building curves inwards, it embraces the garden and creates a sense of shelter. At the ground level, there is open communal garden with high multifunctional spaces along Docklandsweg which bring new vibrancy at street level.

"We designed the entrance to create a sense of arrival," the studio added.

"The entrance extends like a glass void over the full height of the building and provides wide views of the collective garden and the new urban district along the IJ from all floors." 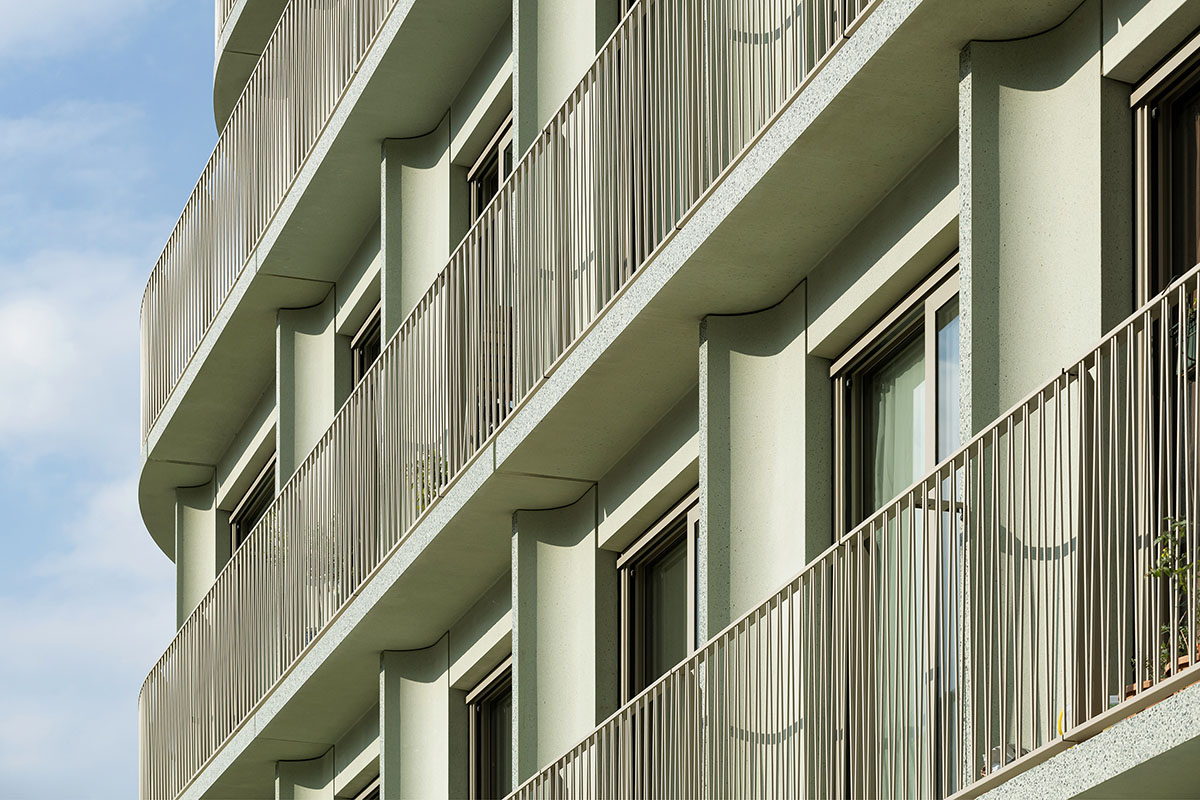 Since the studio used prefabricated elements in the façade, the building was realised in a very short time frame and according to the studio, this did not only allow construction costs to be greatly reduced, but also enabled residents to move into their homes much sooner.

Light green concrete becomes the main material that reinforces the language of the building.

The studio integrates a play of lines between the horizontal bands and vertical fins of soft green material, and this distinguishes De Jakoba from the surrounding buildings. 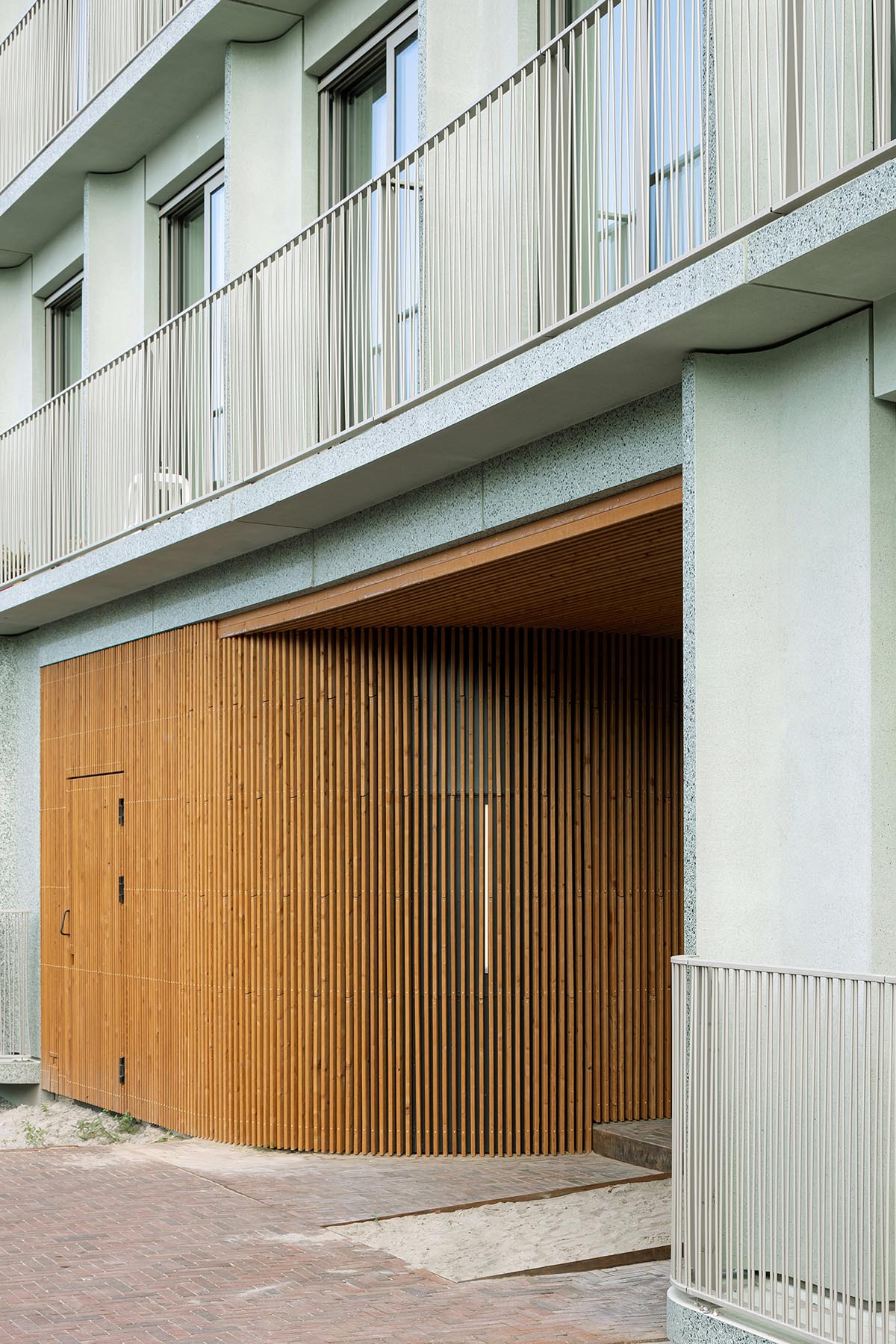 "As the thin edges of the concrete panels could be polished in one stroke, we were able to conveniently add attractive detailing to the facades," the architects explained. 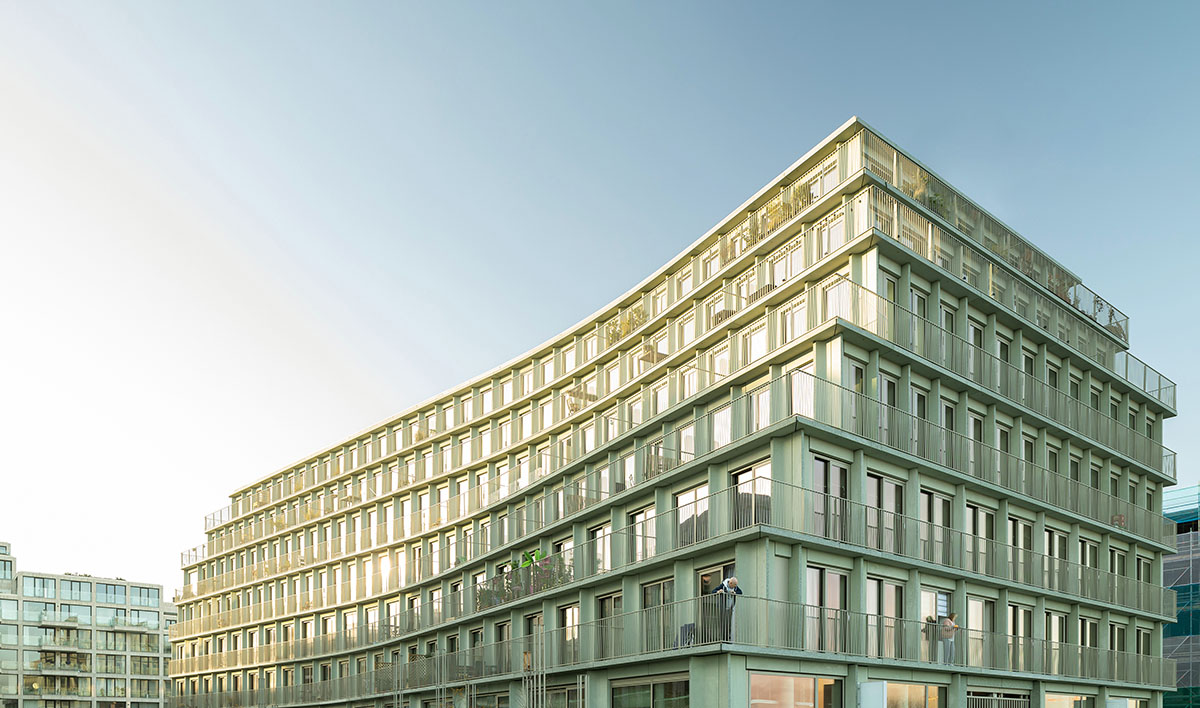 The architects enrich materialisation with powder-coated silver-gold window frames and balustrades, adding a warm glow. The subtly curved pillars create a changing play of light and shadow throughout the day. 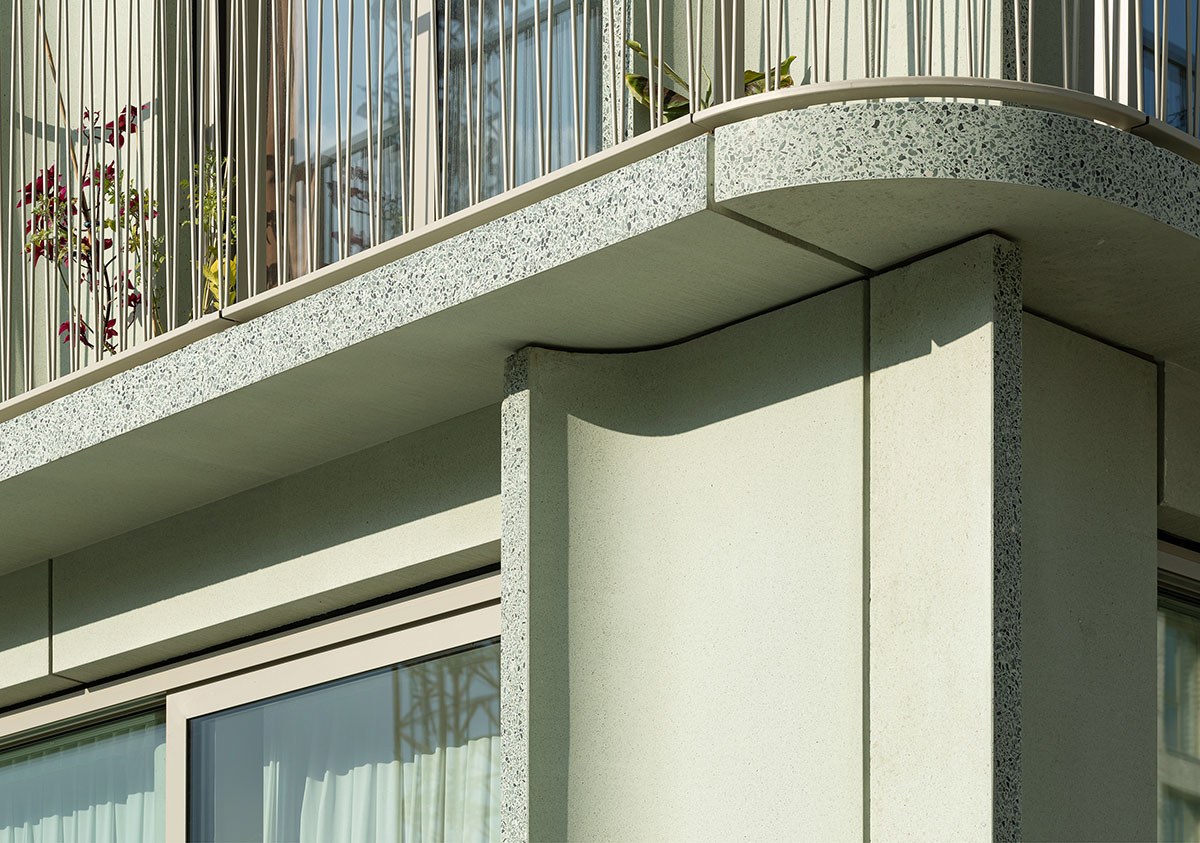 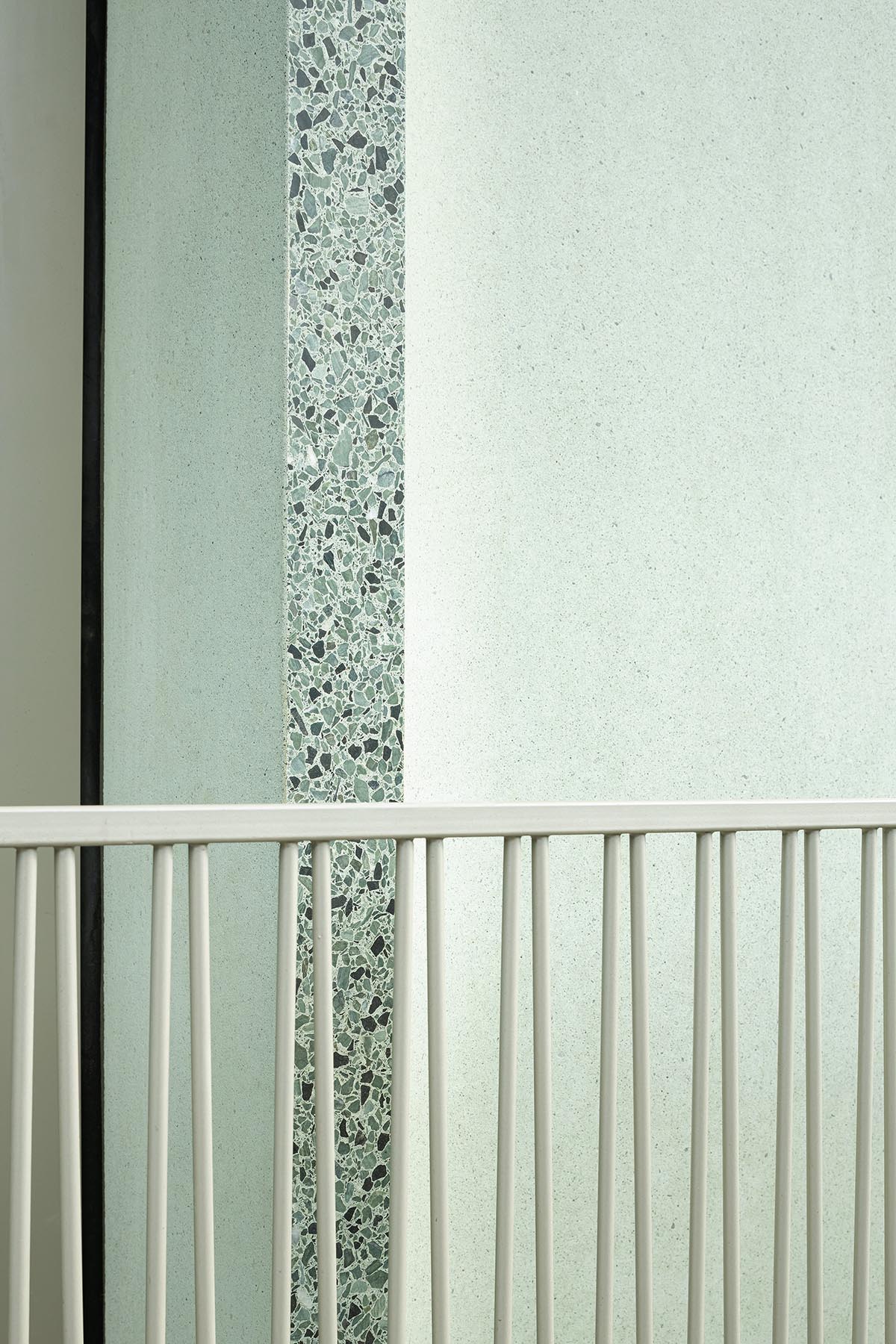 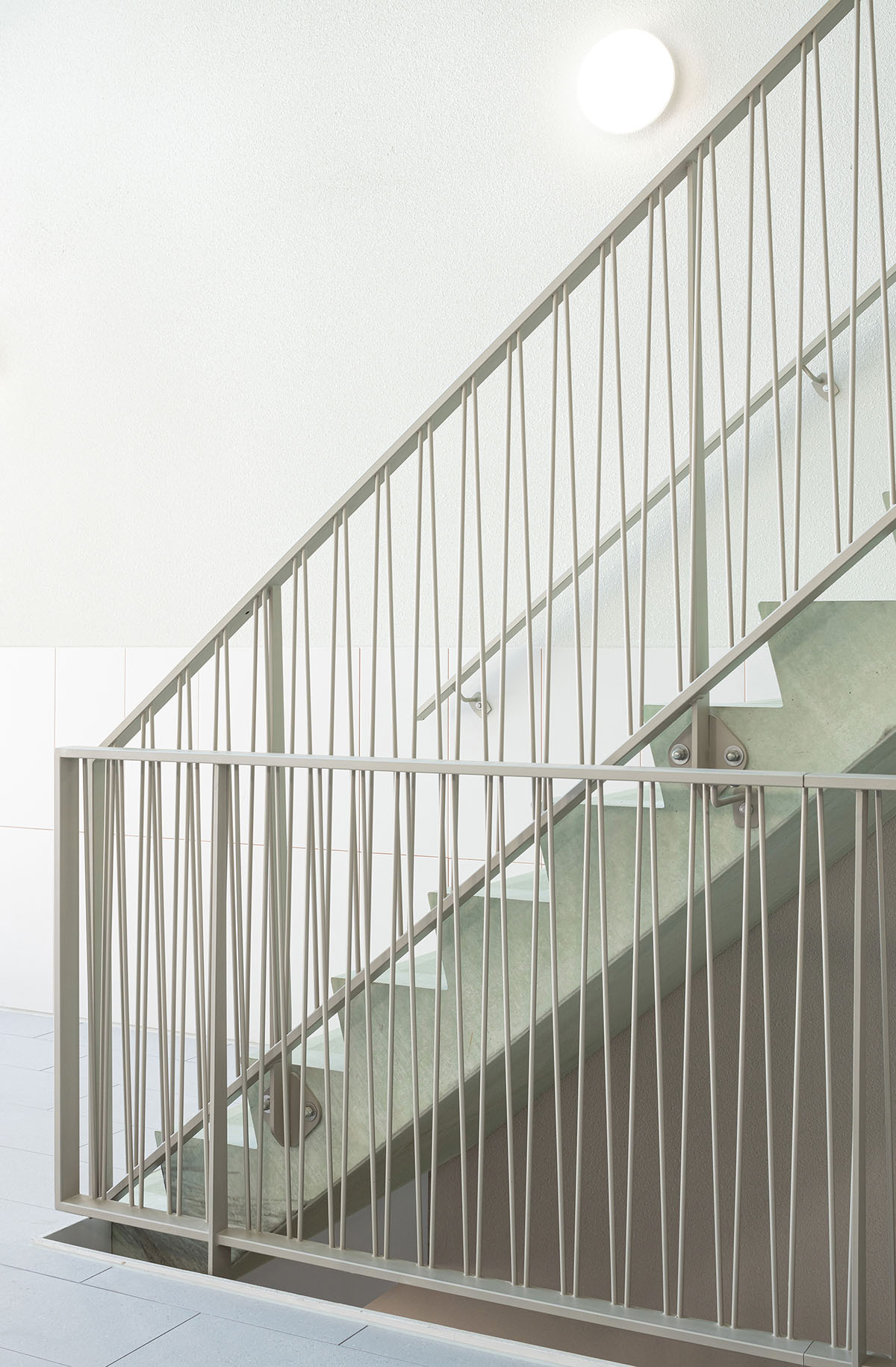 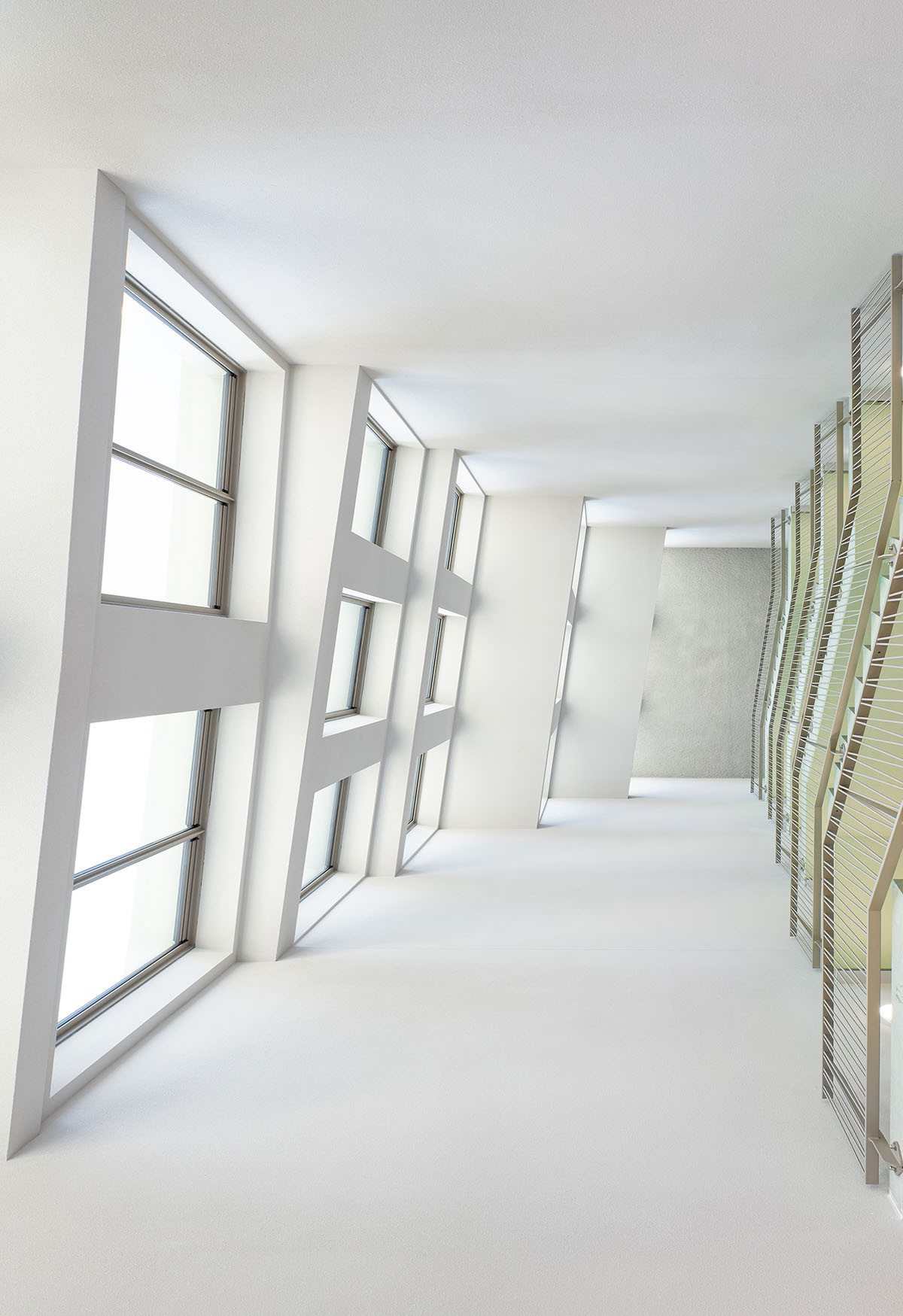 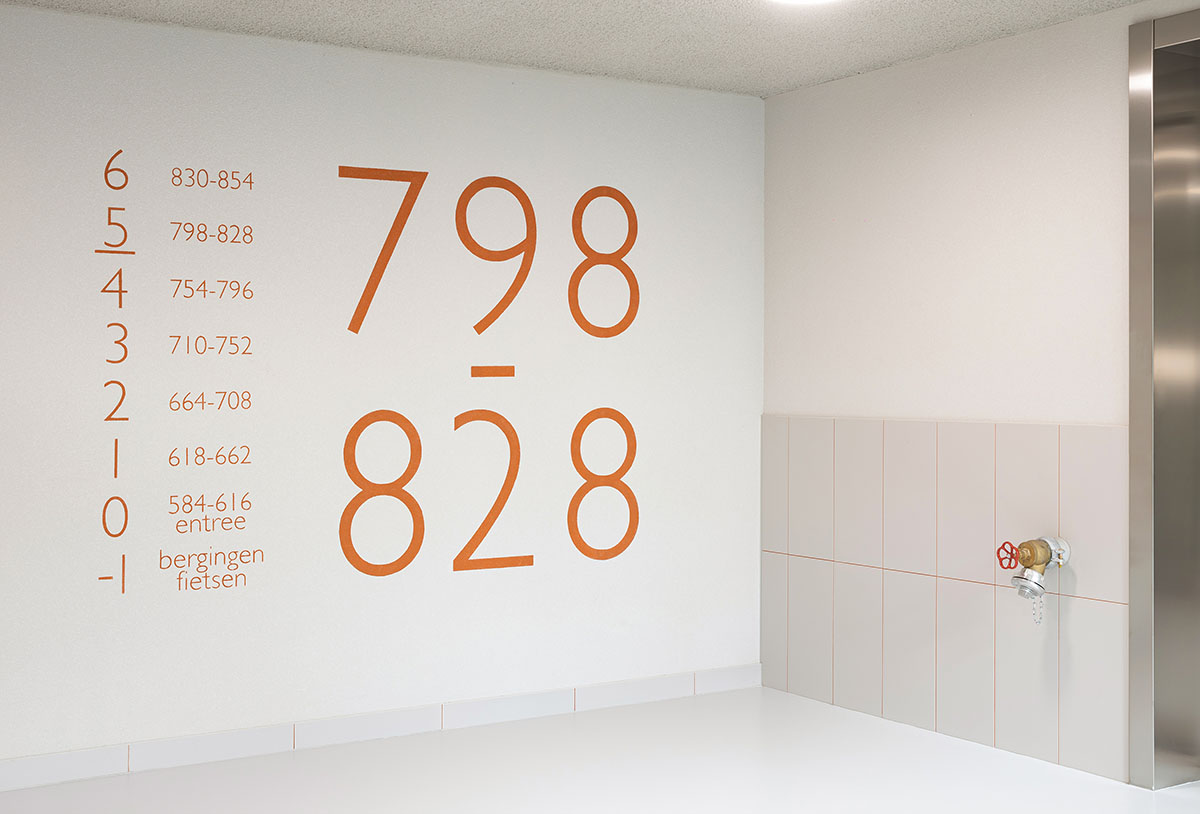 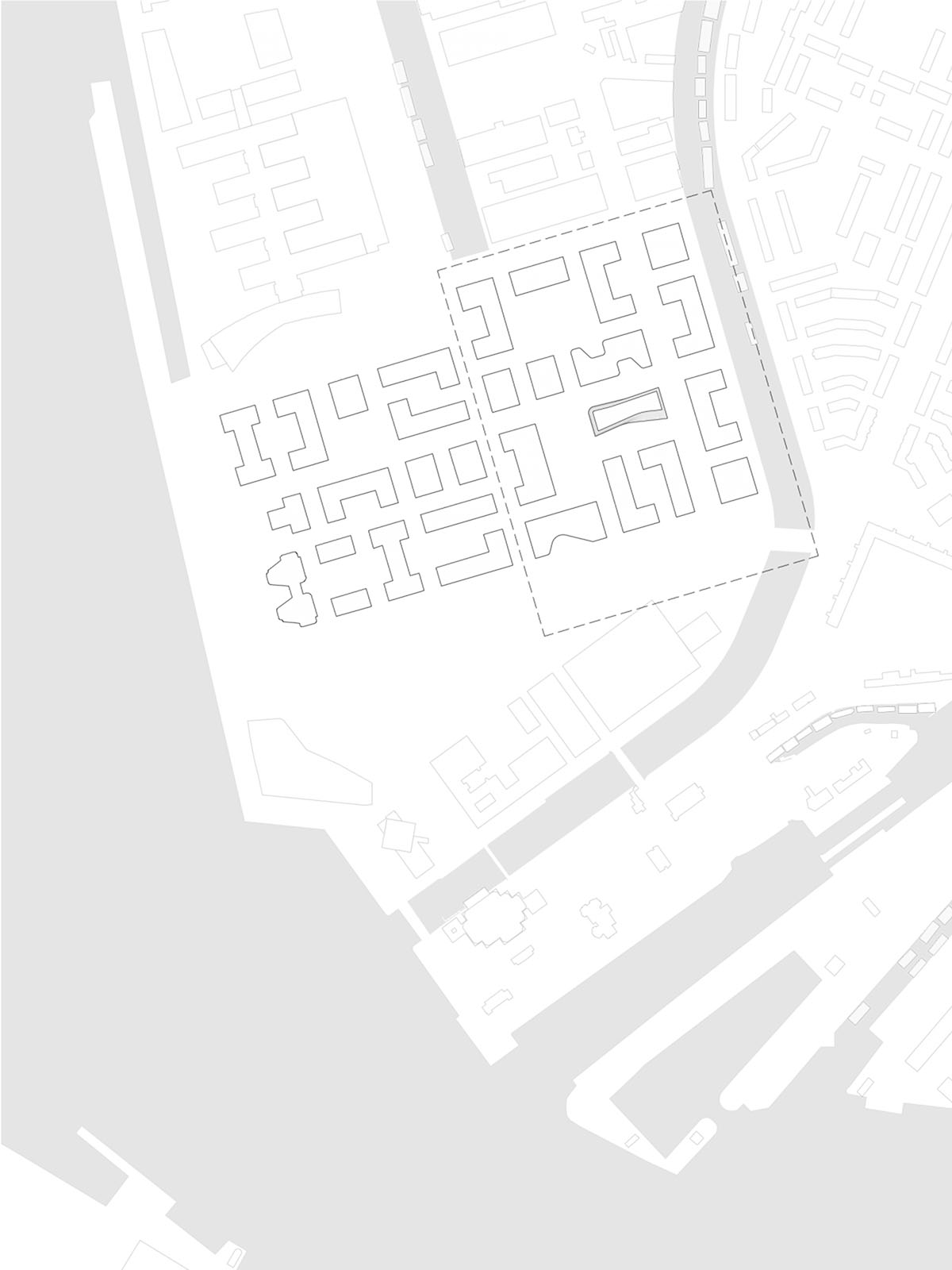 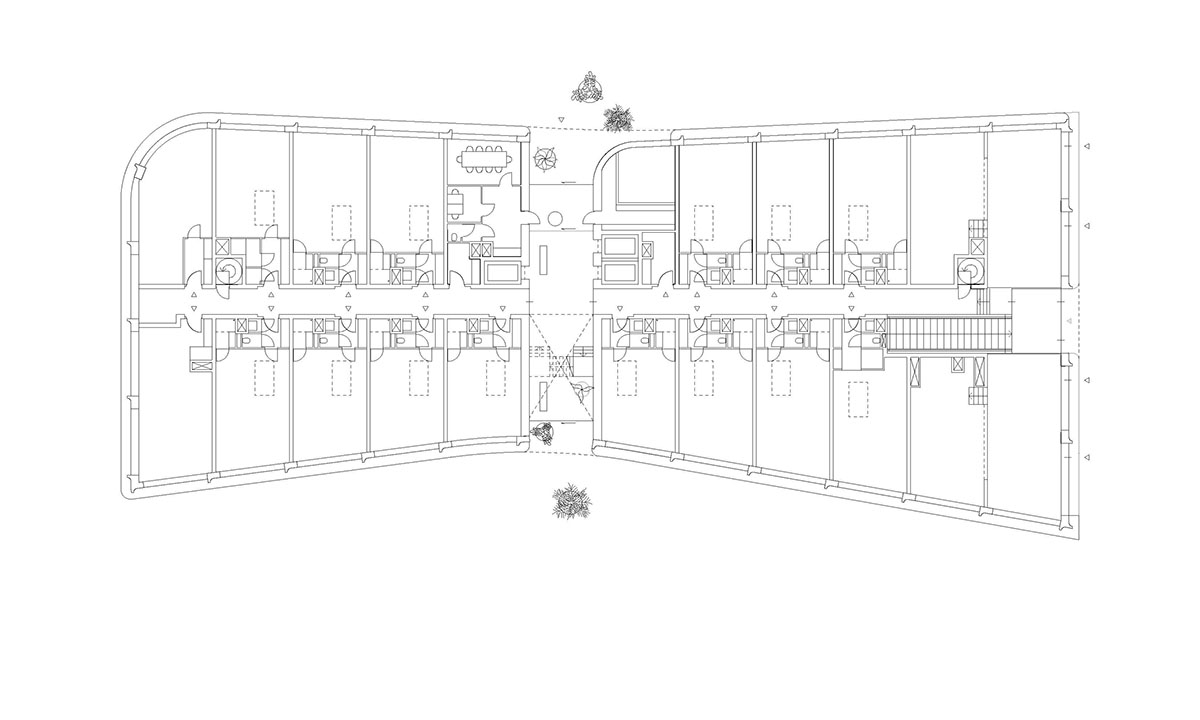 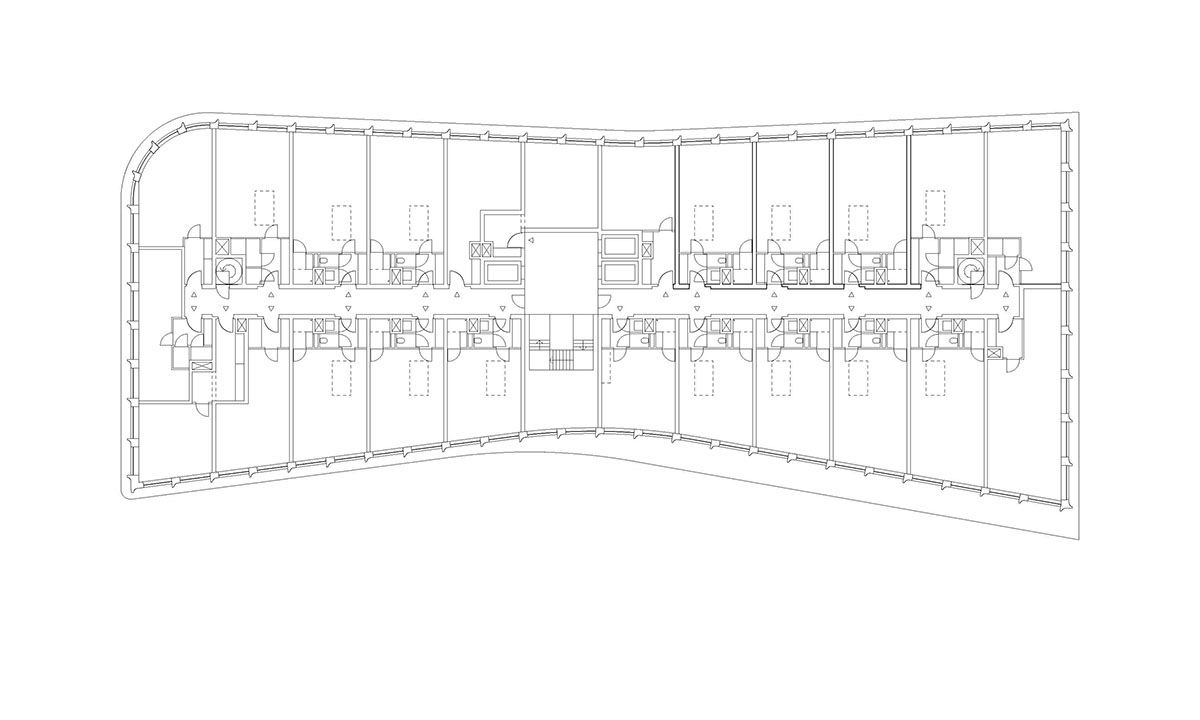 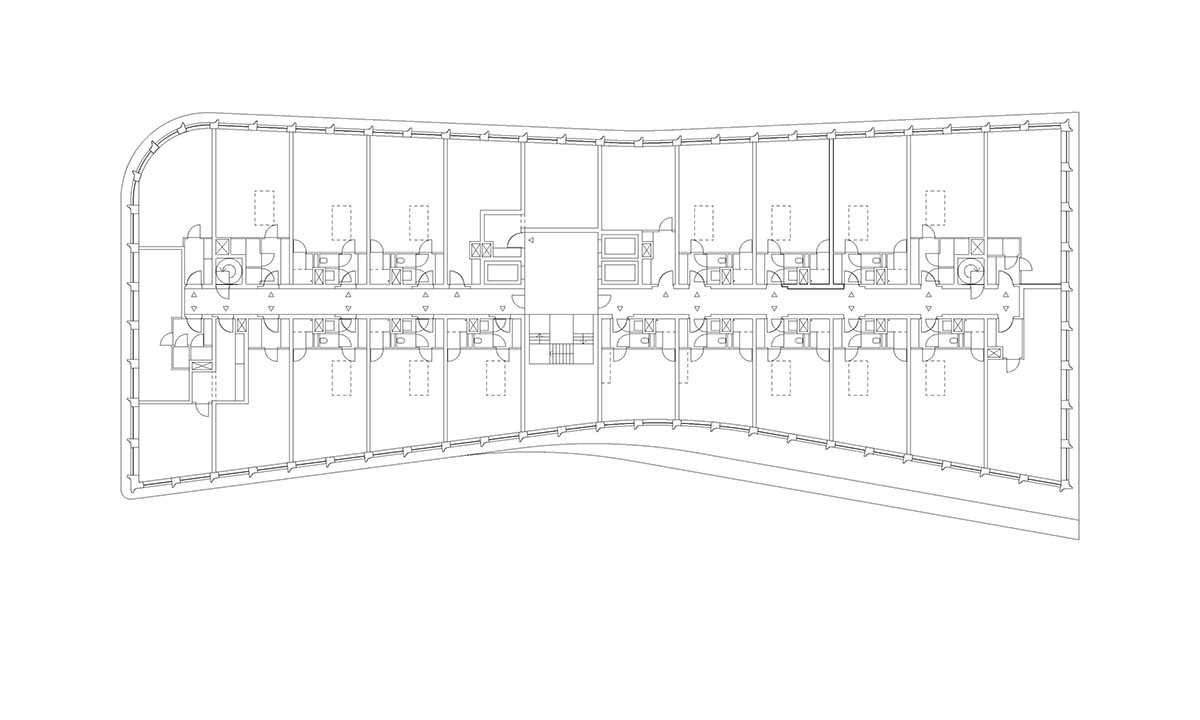 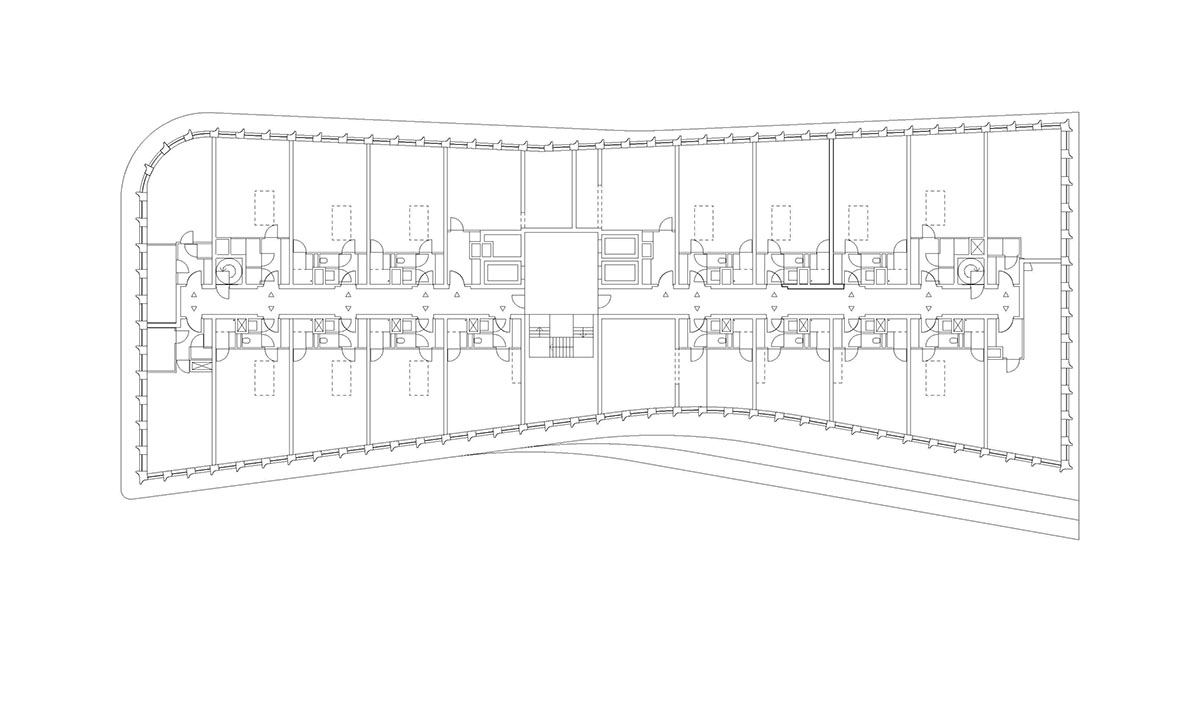 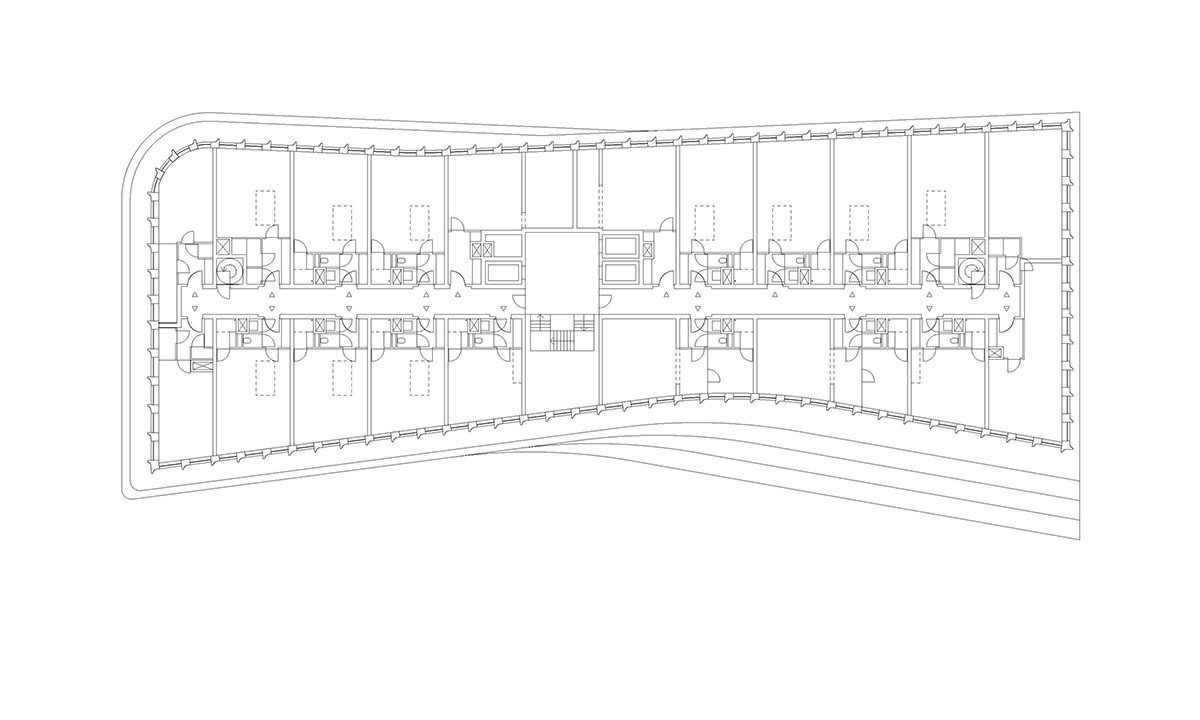 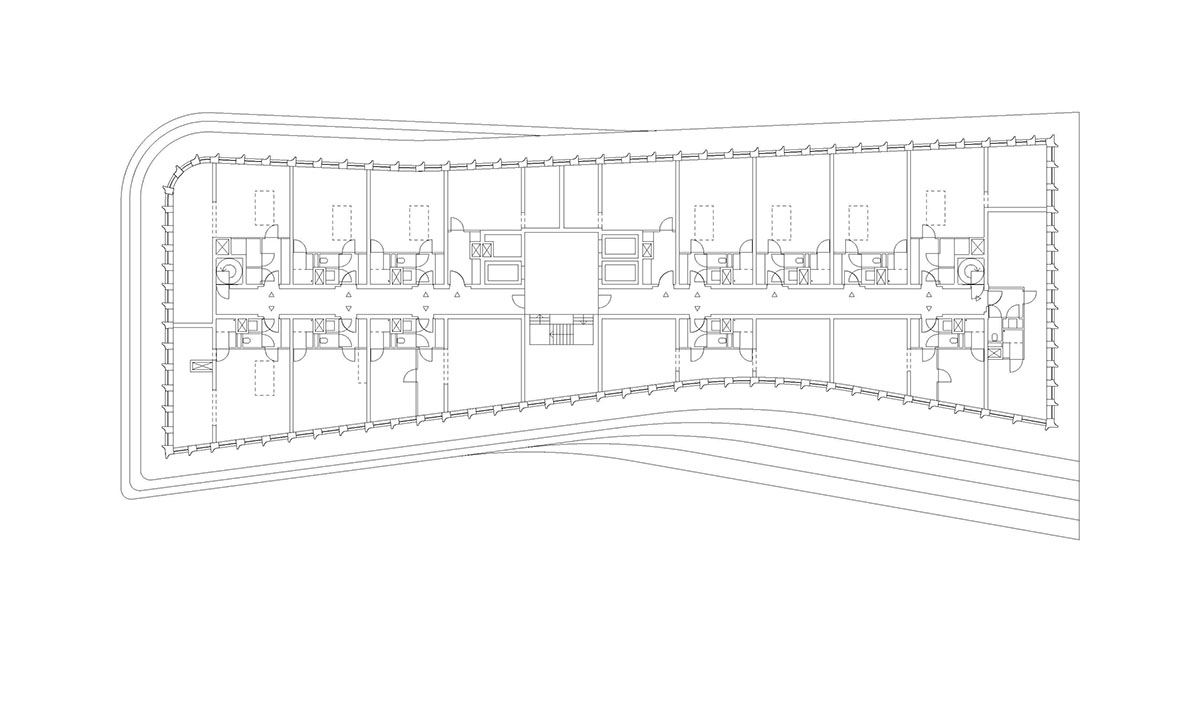 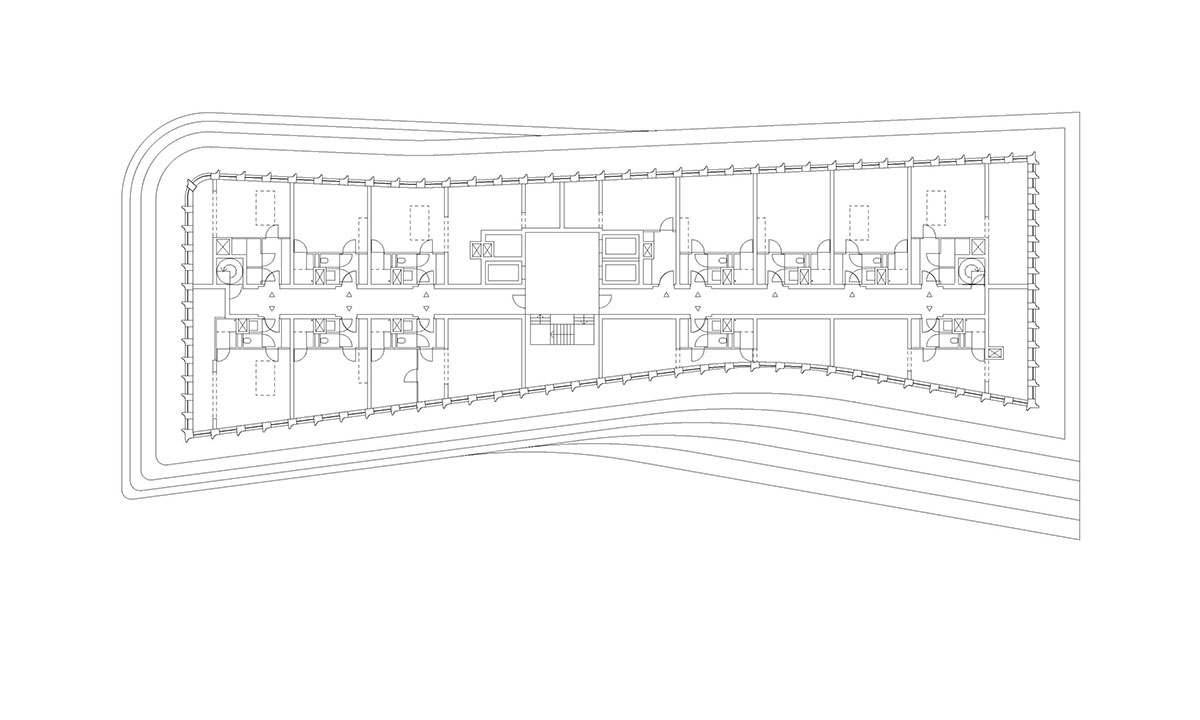 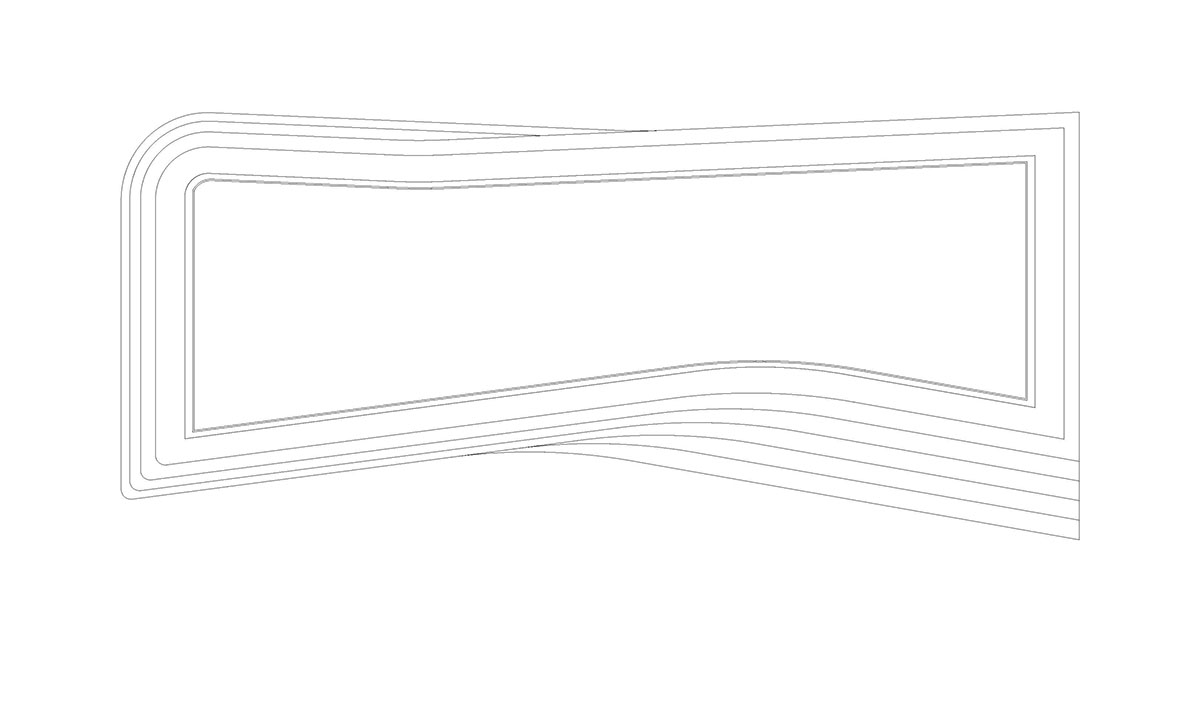 The studio designed a green-colored, pavilion-like workspace added to the center of an office space in Lelylaan-Delflandlaan, Amsterdam, the Netherlands.

Studioninedots was established in 2011 by Albert Herder, Vincent van der Klei, Arie van der Neut and Metin van Zijl. The studio is an architecture and urban design practice whose work extends from housing to urban concepts.