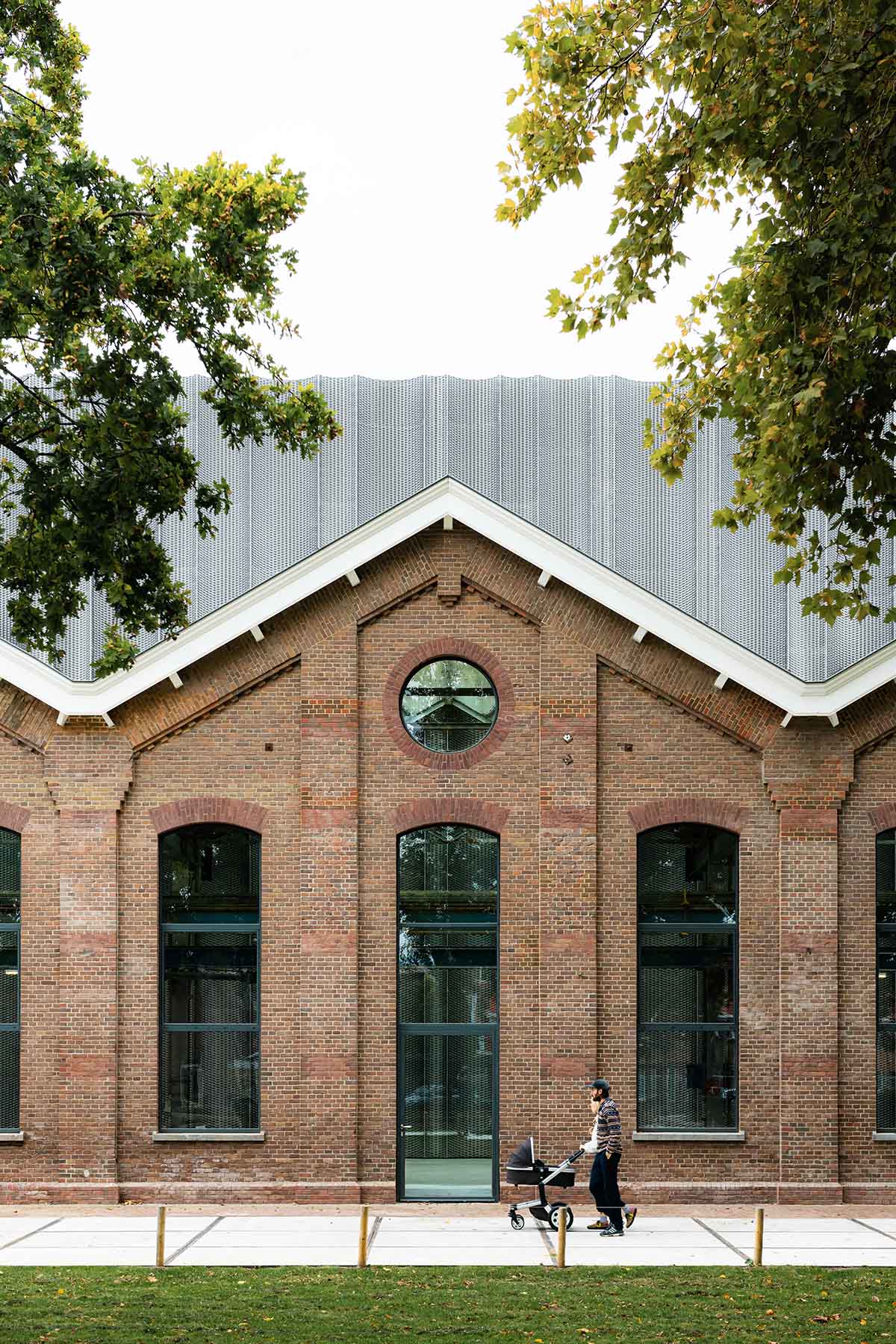 Amsterdam-based architecture and urban design practice Studioninedots has completed the large-scale transformation of a former Dutch Railways workshop building in Utrecht, the Netherlands.

Named Bovenbouwwerkplaats, the impressive workshop building strongly references to the historic presence of the existing structure, made of heavy brick appearance for the Dutch railways which was built in 1905. 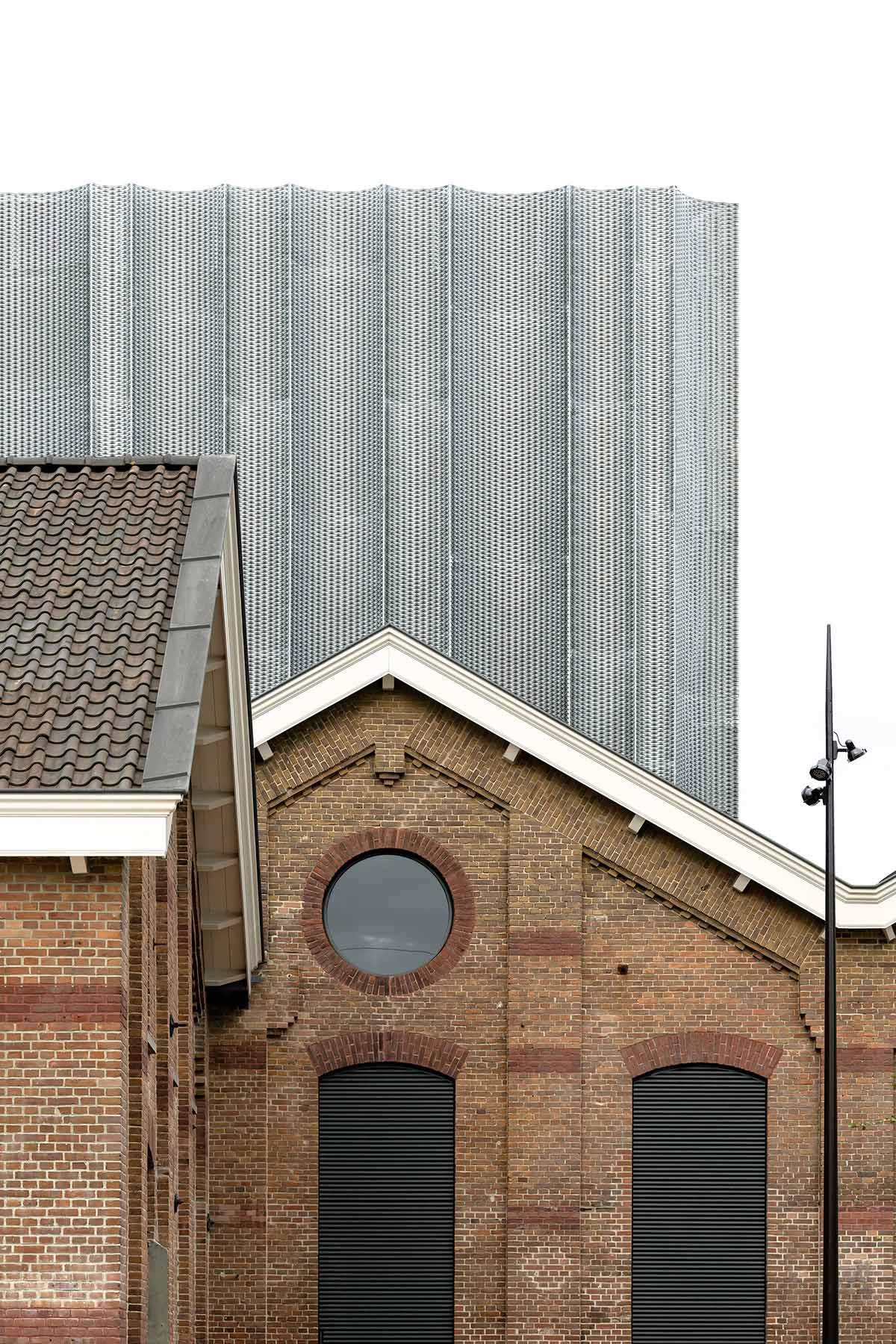 After the building gradually lost its original architectural qualities and functions, the maintenance of the building was getting worse. Also, new constructions around the surrounding building had begun to block the workshop building and its view, and the building needed  a refurbishment.

Studioninedots reinterpreted the original qualities of the building while adding a number of contemporary elements. The studio revived the building into a space full of wonder.

"With one powerful yet elegant gesture – the 'Curtain' – we simultaneously create the back wall of raw, unfinished workspaces in Bovenbouwwerkplaats and a new silhouette towards the city," said Wouter Hermanns, associate at Studioninedots. 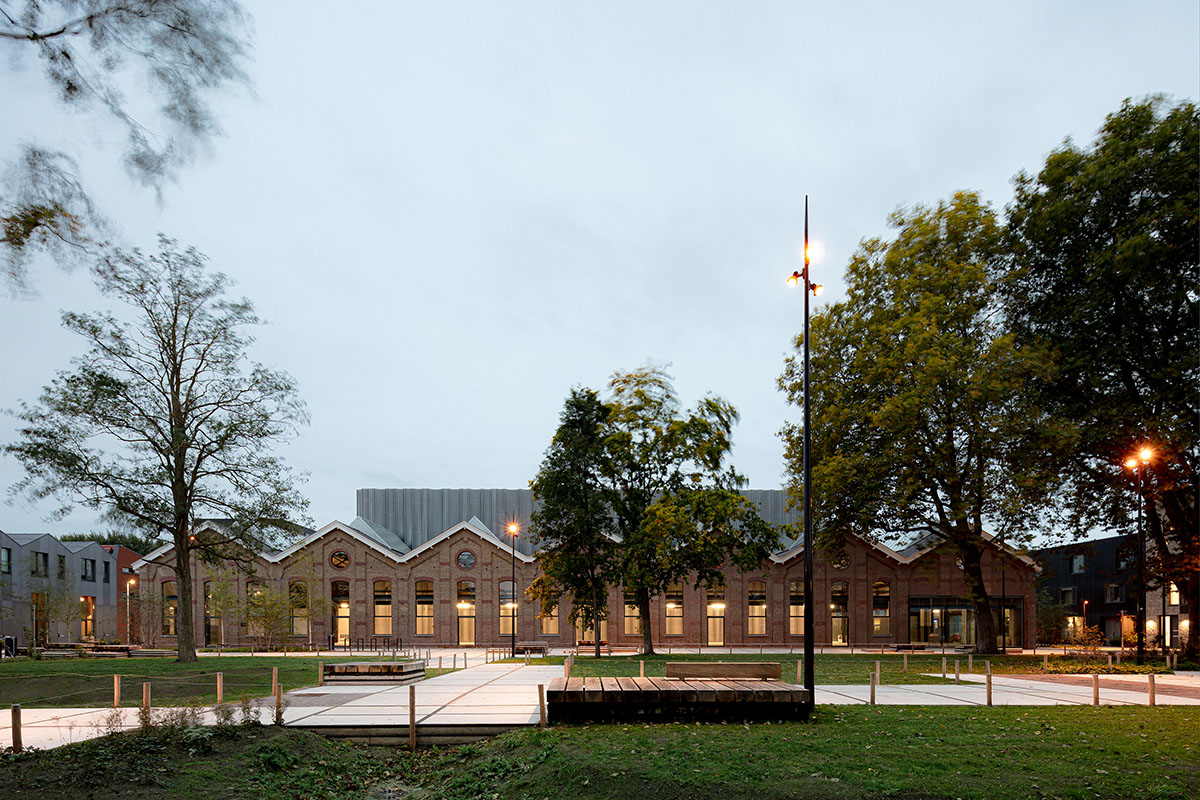 "With Wisselspoor, we committed to our own Cityplot concept, which involves developing unexpected locations into lively urban neighbourhoods in an organic interaction with residents," said Studioninedots. 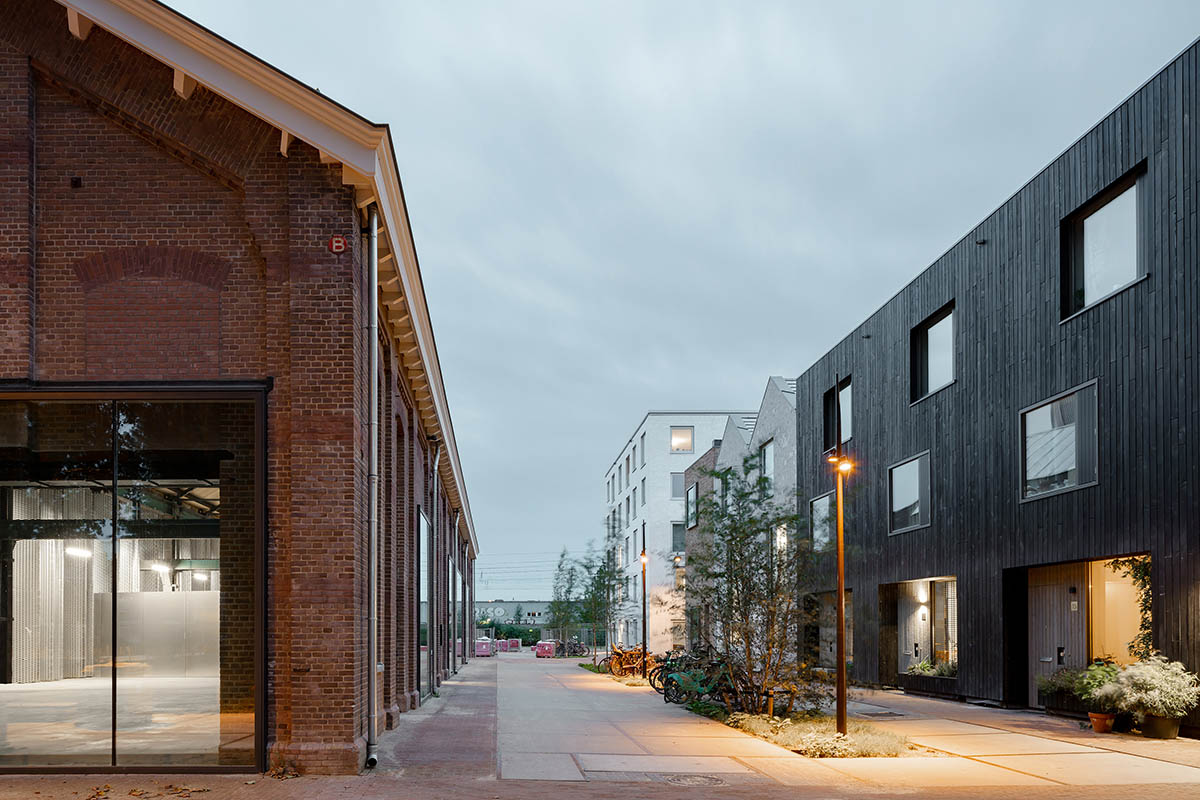 The core feature of a Cityplot neighbourhood is the 100-by-100-metre plot. Small and medium-sized buildings are organised at the edges of the plot, creating opportunities for truly high-quality and green public space in the heart and between the buildings.

Cityplot neighbourhoods are low in traffic, further protecting the quality of the outdoor areas.

By merging a wide range of ambitions and functions that are normally spread across an area into the Bovenbouwwerkplaats, a small-scale urban core where anything can happen is formed. 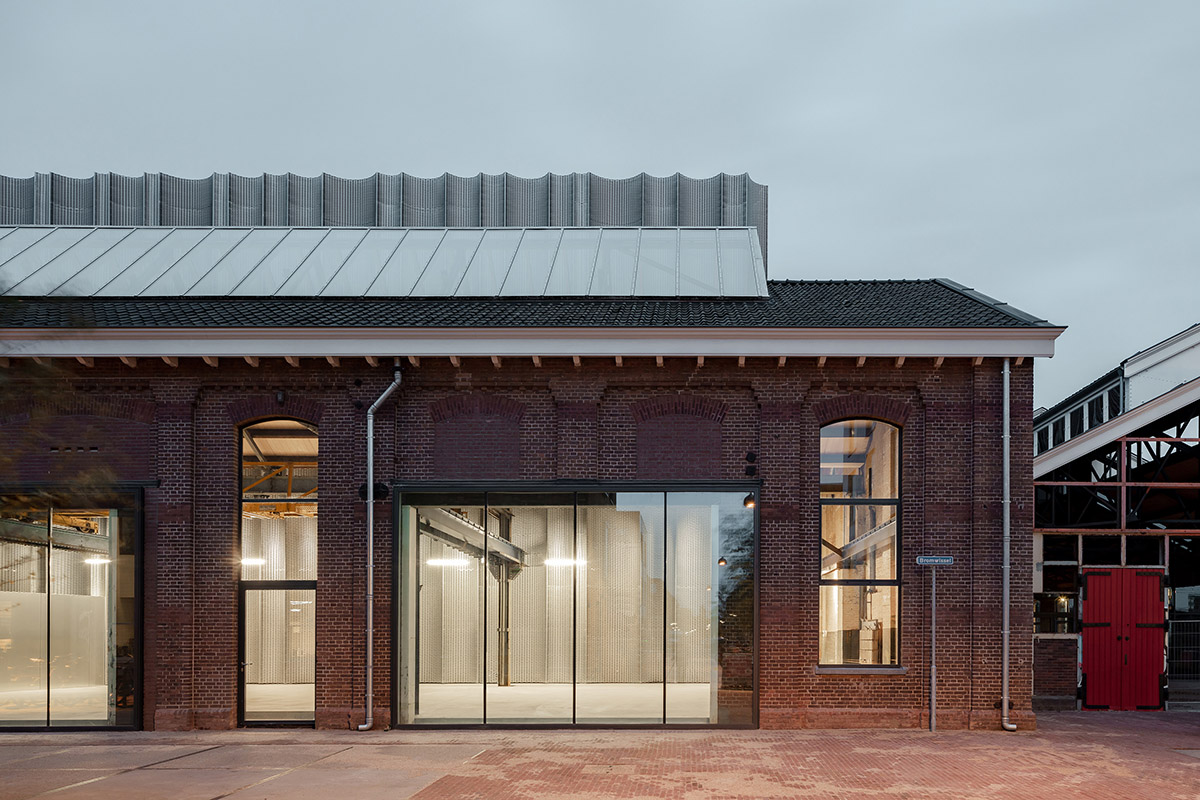 Underneath the existing roof, the team created one open, a large space that can be used for new neighbourhood facilities and creative entrepreneurs. "The space stimulates the senses yet invites your own interpretation of its use," the studio added.

A cut-out from the existing structure in the core has made room for a completely new orthogonal volume, perceptible both indoors and externally. This object houses a five-storey mobility hub for 175 (shared) cars and bicycles.

"By cleverly clustering all mobility within the object, the neighbourhood remains pedestrianised and many additional opportunities to generate quality public space throughout the area are realised," said Ruben Visser, architect. To set a firm architectural gesture, the team introduced the Curtain, an abstract and shiny skin that fully encloses the new object. The Curtain is added to give the volume a sense of scalelessness, making it appear lower and less massive from the outside than it truly is.

The team preserved all relics in the building, such as existing installations, pipes and even damages. 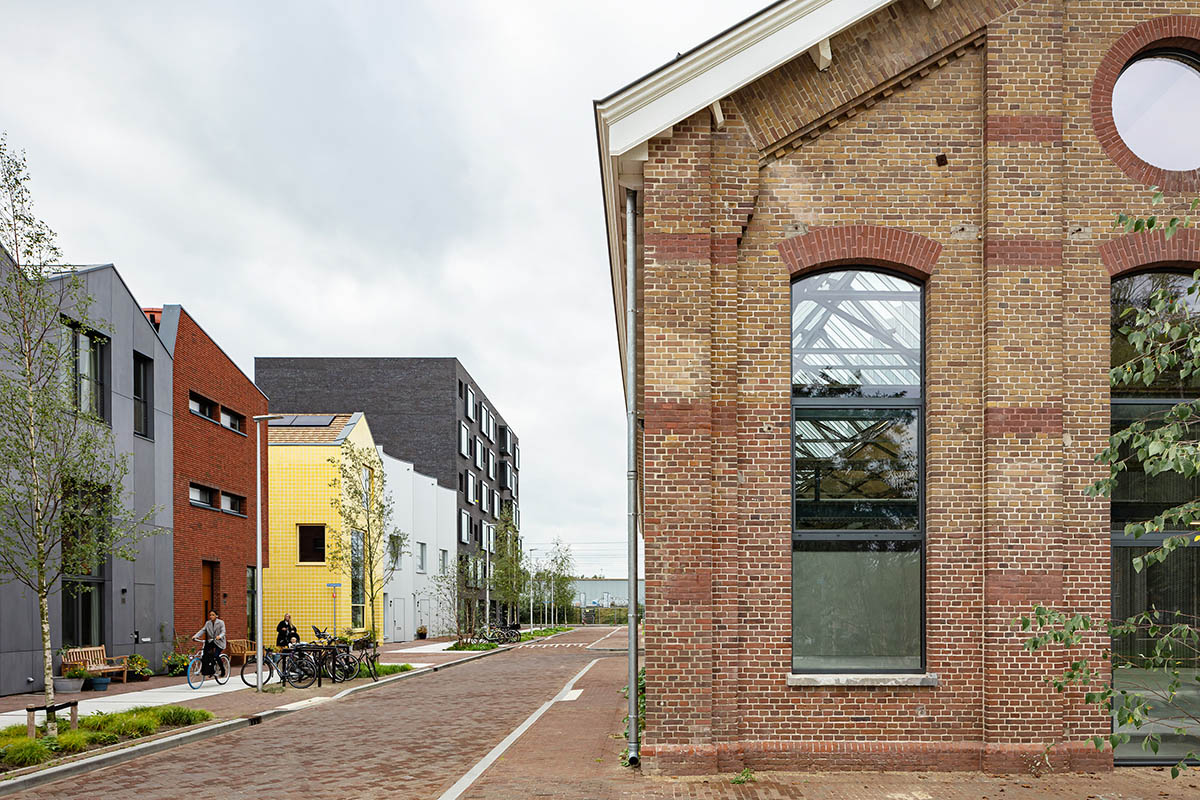 The studio filled in the original vertical window openings with transparent glass, which, together with the large, curved glass walls all around, maximise the connection with the neighbourhood.

Thanks to the transparent roof, the entire floor area is washed by a natural light during the day. Due to the ample light in the building, the continuation of the abstract object within the building can also be clearly seen from outside. 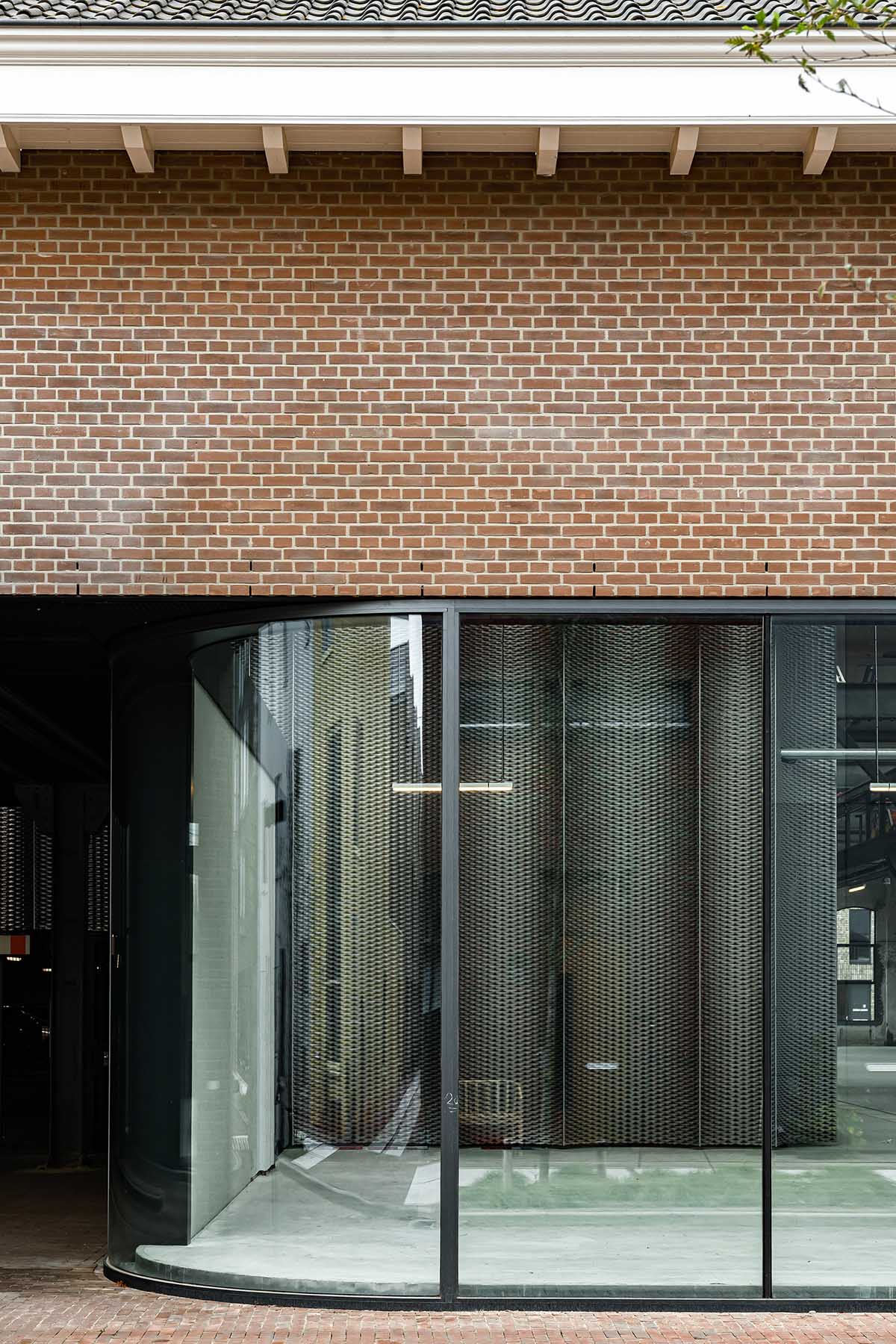 "Our transformation restores all the industrial qualities of the old warehouse – its skeleton, roofs, external facade and detailing," said the studio.

"The Curtain consists of curved expanded metal elements arranged in a rhythm of widths, constantly renewing the appearance of the building throughout the day and the seasons. From its wide surroundings, Bovenbouwwerkplaats is recognisable as the new icon of Wisselspoor." 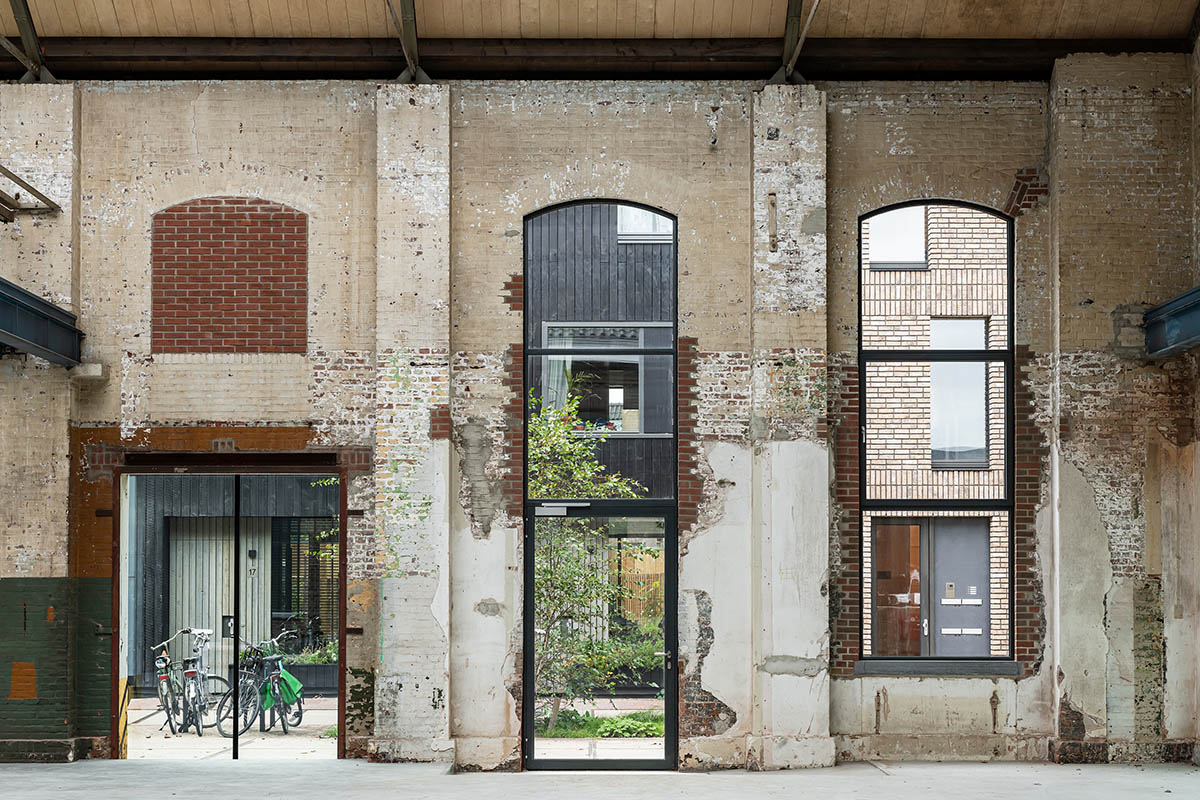 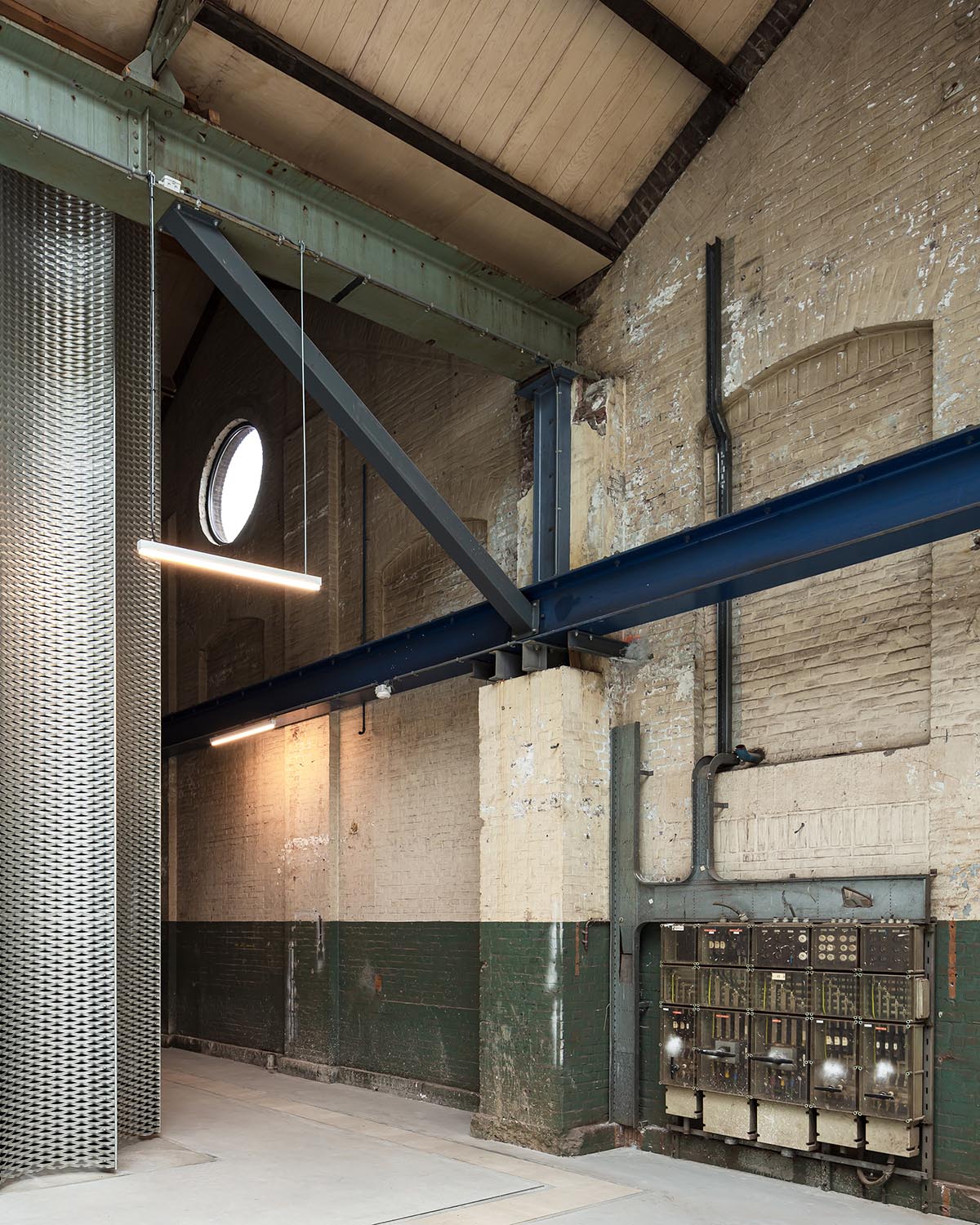 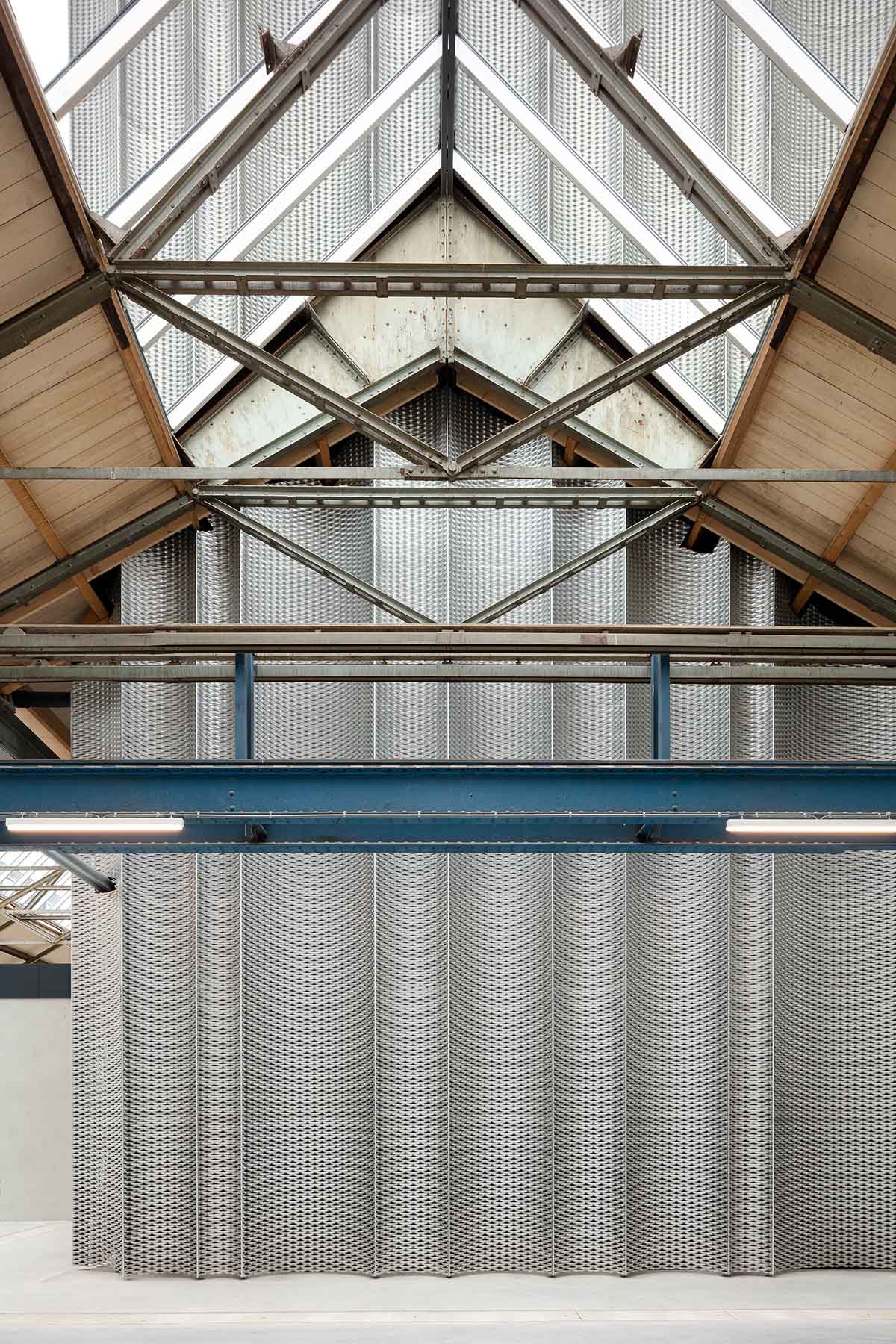 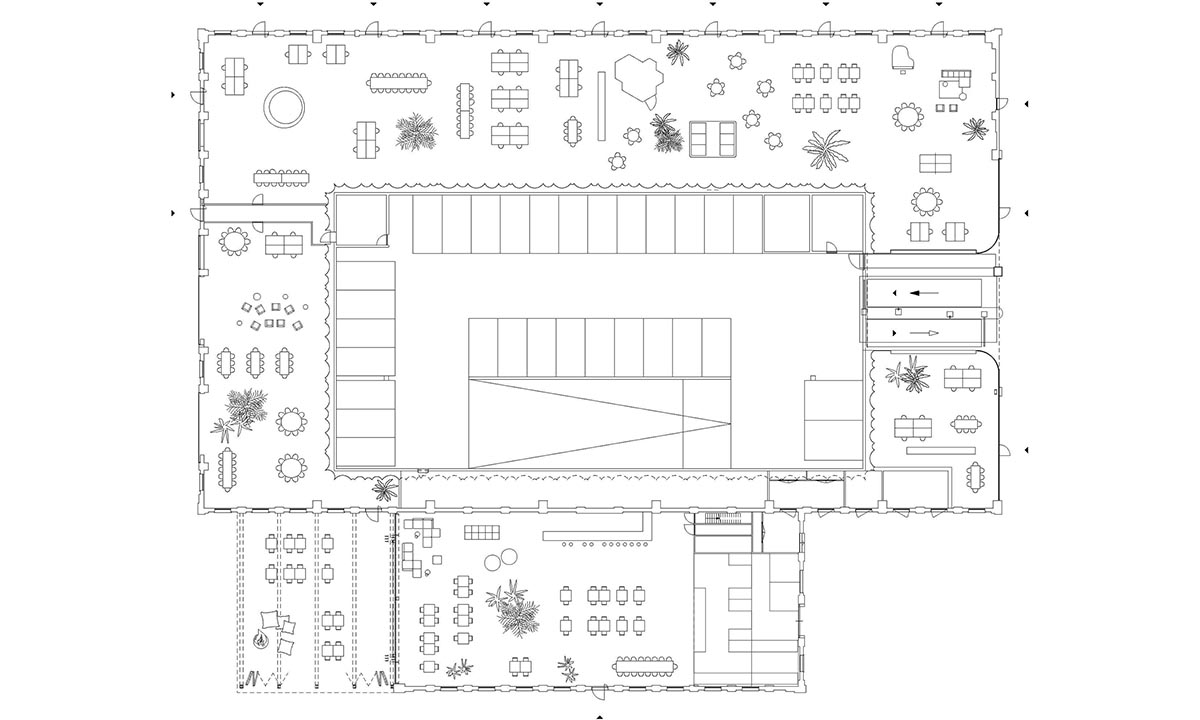 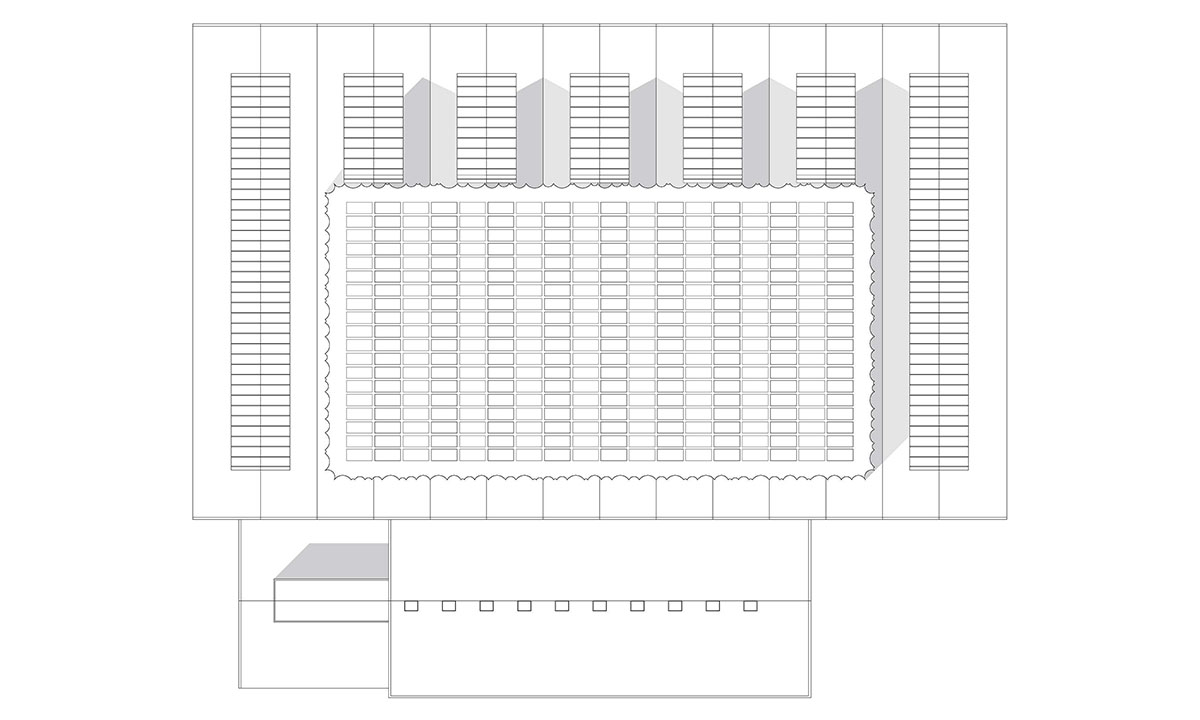 Studioninedots designed a green-colored, pavilion-like workspace added to the center of an office space in Lelylaan-Delflandlaan, Amsterdam, the Netherlands.