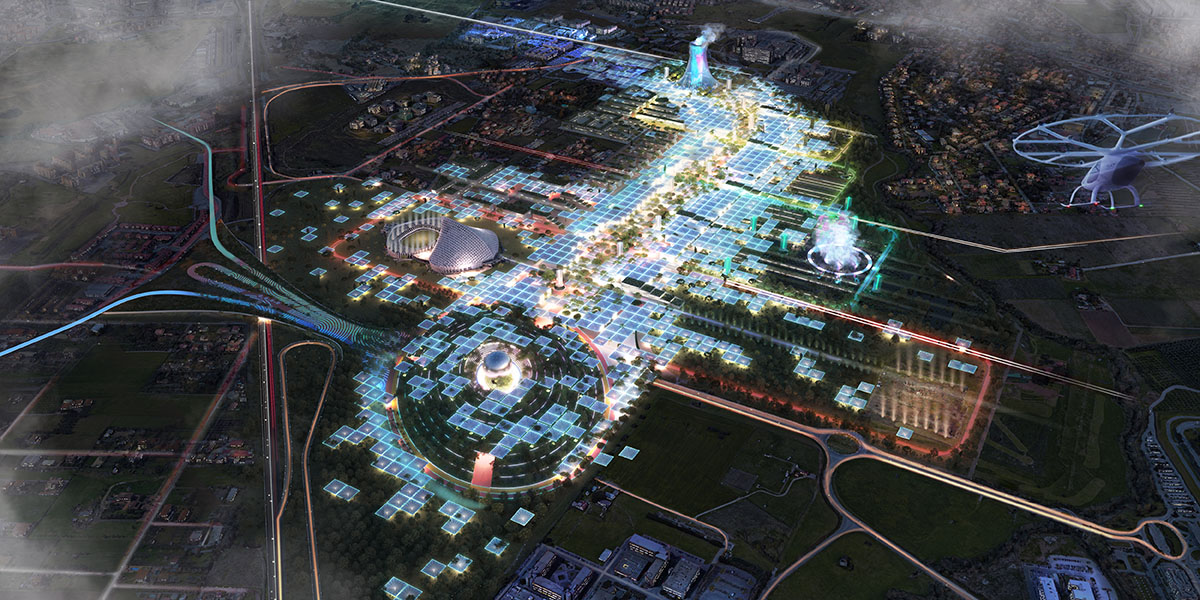 The city of Rome can embrace "the world’s largest urban solar farm" as a result of a bid to host the World Expo in 2030.

The large masterplan, designed by Italian innovative architecture practice Carlo Ratti Associati, together with architect Italo Rota and urbanist Richard Burdett, has been submitted by the city of Rome to the Bureau International des Expositions (BIE) on September 7th, 2022.

If Ratti, Rota and Burdett's masterplan wins, the masterplan will be built on the "energy-sharing" principle.

The scheme will be a keystone of renewable energy as it is one of the most urgent issues of 21st century. The project helps that every country can contribute to a solar farm that would power the exhibition site and decarbonize the surrounding neighborhoods. 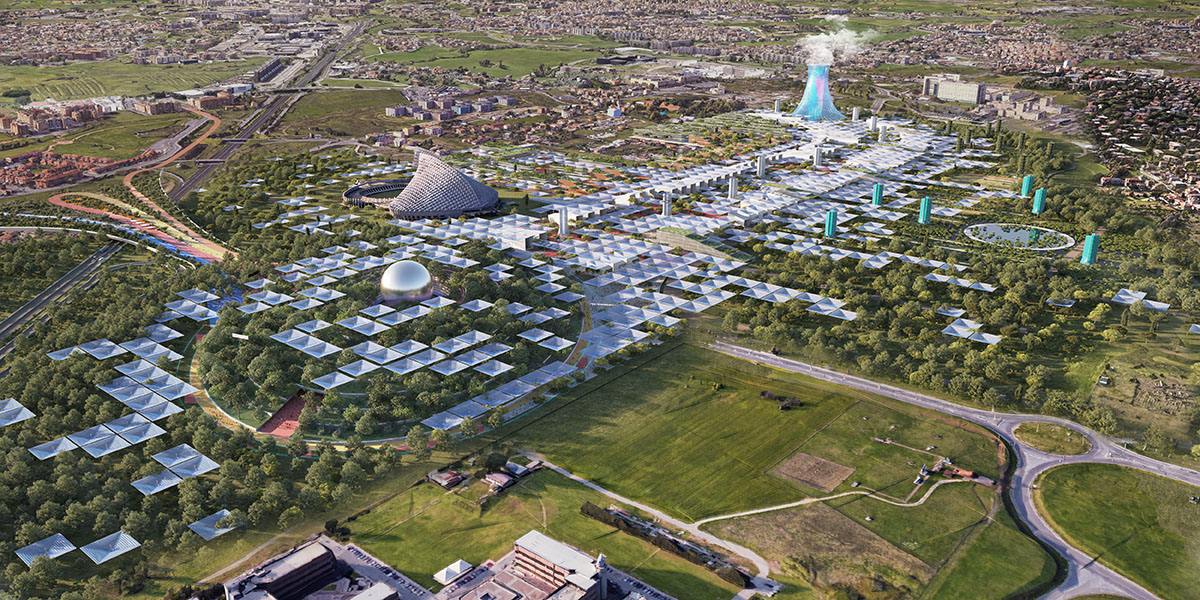 All pavilions in the masterplan, including the revamped “Vele” complex by Santiago Calatrava, are designed to be fully reusable, which will turn the area into an innovation district after the event.

Expo 2030 Roma will take place in Tor Vergata, a vast area in the municipality of Rome that is home to the eponymous university – one of the leading academic hubs in Italy – as well as a densely inhabited residential district.

However, in recent years the neighborhood has begun to be neglected. Based on a lack of interest to the area, the masterplan aims to reverse that process with a sustainable and long-term development. 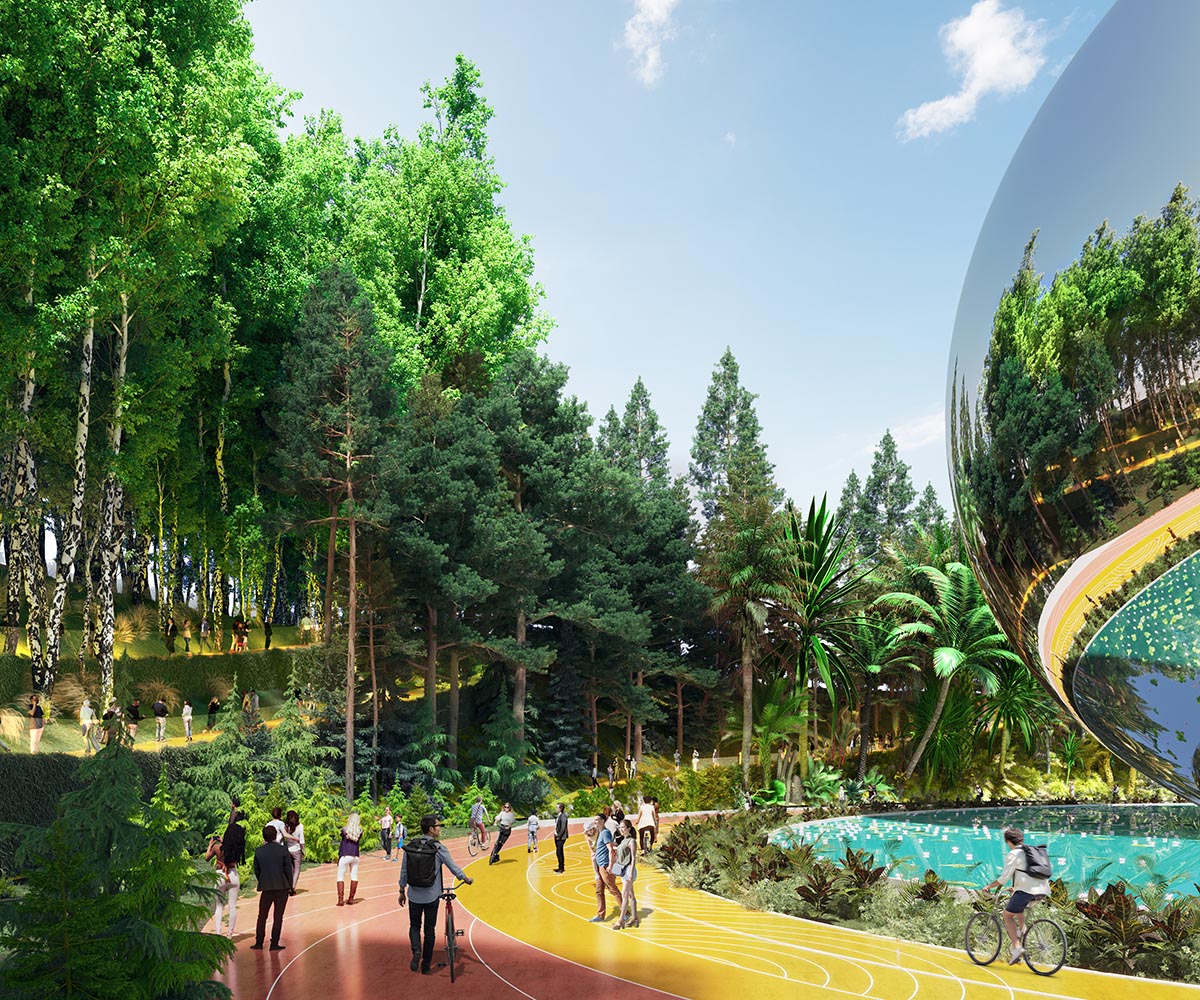 After the 2030 World Expo is over, all the event pavilions are aimed to be used for different functions, giving shape to a new innovation district in the Italian capital.

Carlo Ratti Associati, Italo Rota and Richard Burdett are working with several partners on the masterplan, including Arup for sustainability, infrastructure, and costing, LAND for landscape design, and Italian firm Systematica for mobility strategy. 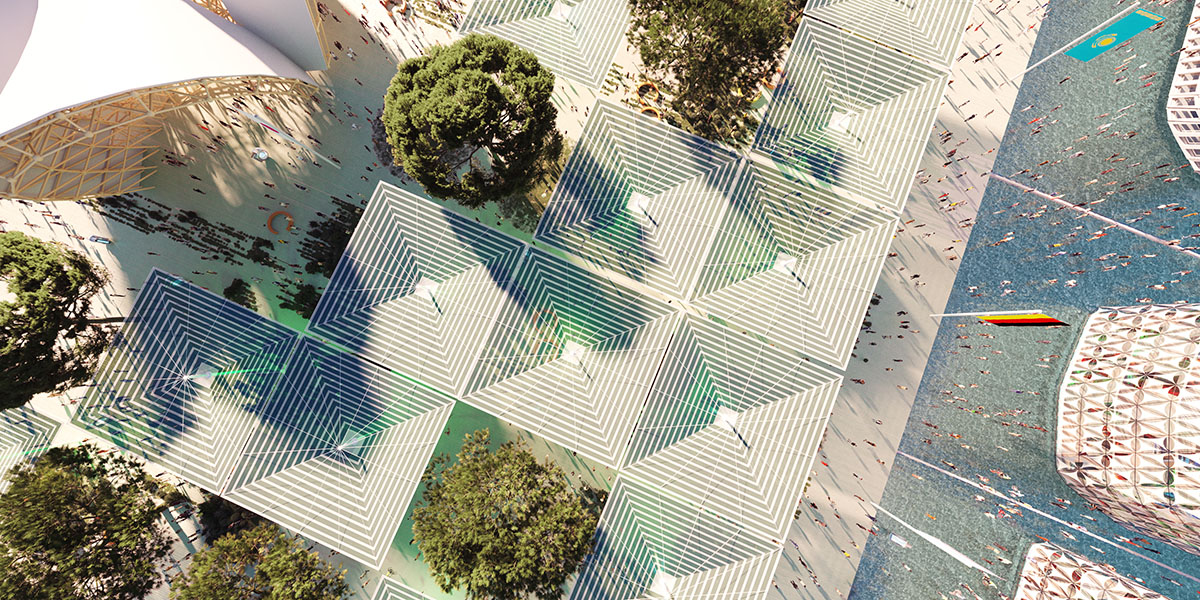 The masterplan will help decarbonize the neighborhood

According to the team, the new vision of the Expo Solar Park ensures that the event will not only reinvigorate the neighborhood, but help decarbonize it.

Encompassing a total of 150,000-square-metre area, the solar farm in Rome will boast a production capacity of 36 megawatt-peak, which will make it "the largest urban, publicly accessible solar farm in the world."

The solar farm is composed of hundreds of unique "energy trees" that open and close their panels throughout the day, harvesting energy while also offering visitors ample shade.

When anyone looks from above, the infrastructure creates "a signature mosaic look" for the entire Expo site.

Eco-system 0.0 Pavilion, the tallest building of the Expo, is added to this complex energy grid, providing cooling through evaporation.

"Our master plan experiments with collective city-making processes, new energy-sharing strategies, and inclusive urban transformations that go well beyond the temporal and spatial confines of the event," Ratti added. 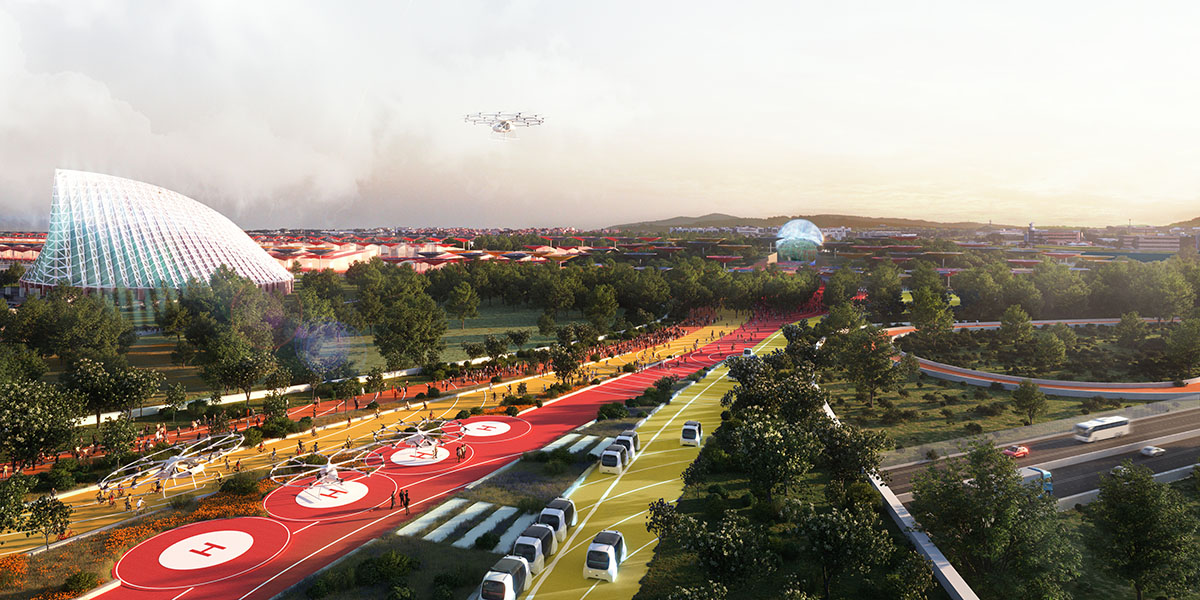 "We conceived this project like a feasible utopia – one that aims to be a catalyst for new projects and ideas. The main driver behind this goal is to let natural ecosystems and technological inventions work in sync, just like human and natural energy would make each other more intense,” architect Italo Rota says.

"This new approach to temporary events could become the foundation of a new model for urban development," Rota added.

The masterplan is divided into the three main areas: the City, the Boulevard, and the Park.

The general layout is arranged from west-to-east side, while creating a harmony between the artificial world and the natural world.

According to the team, "the harmony should be created if we are to be successful at combating climate change."

The layout is characterized by a gradual transition from urban to natural as one moves from west to the east. The City is placed in the West functions as the Expo Village, and The City will become an extension of the University of Tor Vergata’s campus after the event.

The second element is The Boulevard, which is the central pedestrian axis and a pathway through all of the national pavilions. 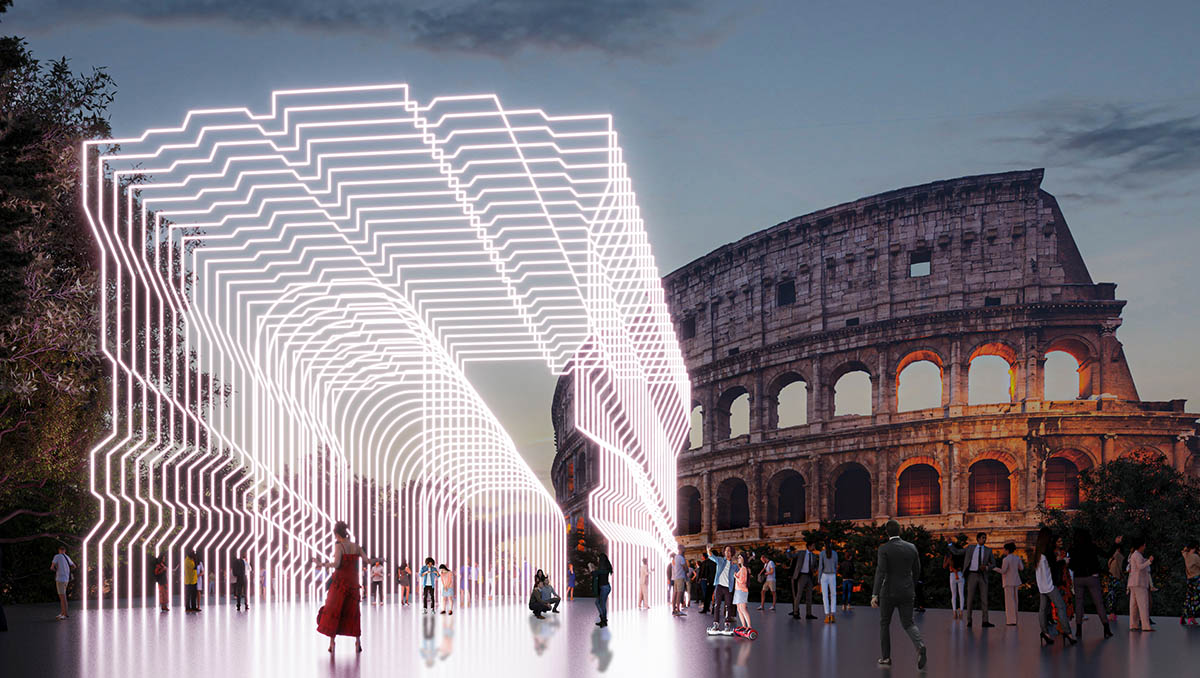 The latest component is The Park, situated in the east side and is covered with lush vegetation and accentuated by thematic buildings. Amongst thematic buildings, there is a “Pale Blue Dot" pavilion dedicated to disseminating knowledge about the natural world.

In the masterplan, the revitalization plans also include the repurposing of a massive sports complex designed by Spanish architect Santiago Calatrava.

Abandoned for 15 years, the structure, locally known as “Le Vele”, is to become one of the flagship pavilions of Expo 2030 Roma, hosting public events and showcasing the transformation of Tor Vergata.

Next to it, the main entrance of the exhibition site serves as the primary access point with a set of new transportation and mobility connections. Among them, a long green corridor links Expo 2030 Roma to the adjacent archeological sites on the Appian Way and Rome’s other historical buildings and monuments. Headed by Committee President Giampiero Massolo, Expo 2030 Roma was conceived under the theme “People and Territories, Together: Urban Regeneration, Inclusion and Innovation.” The proposal is being evaluated by the Bureau International des Expositions (BIE).

The host city will be decided based on a vote participated by the 170 BIE member states, which is expected to take place in November 2023.

CRA has extensive experience designing and building at World Expos. The firm designed the Future Food District for Expo 2015 Milano.

Afterwards, it released the master plan for MIND-Milan Innovation District on the former Expo site, currently being implemented by the developer Lendlease.

The office then worked with Italo Rota, Matteo Gatto, and F&M Ingegneria to build the Italian Pavilion at Expo 2020 Dubai, which utilized recycled and reusable materials, from plastic to orange peels and coffee grounds, to create fully circular buildings.