The morphology of the the viewing platform is derived from the irregularities and accidents of the marine rocks.

Recently opened to the public, External Reference has created a new project, which was led by architect Carmelo Zappulla.

According to the studio, for the first time thanks to this platform, it generates a connection between the Passeig del Mare Nostrum and the Plaça de la Rosa dels Vents, on the beachfront of La Barceloneta. 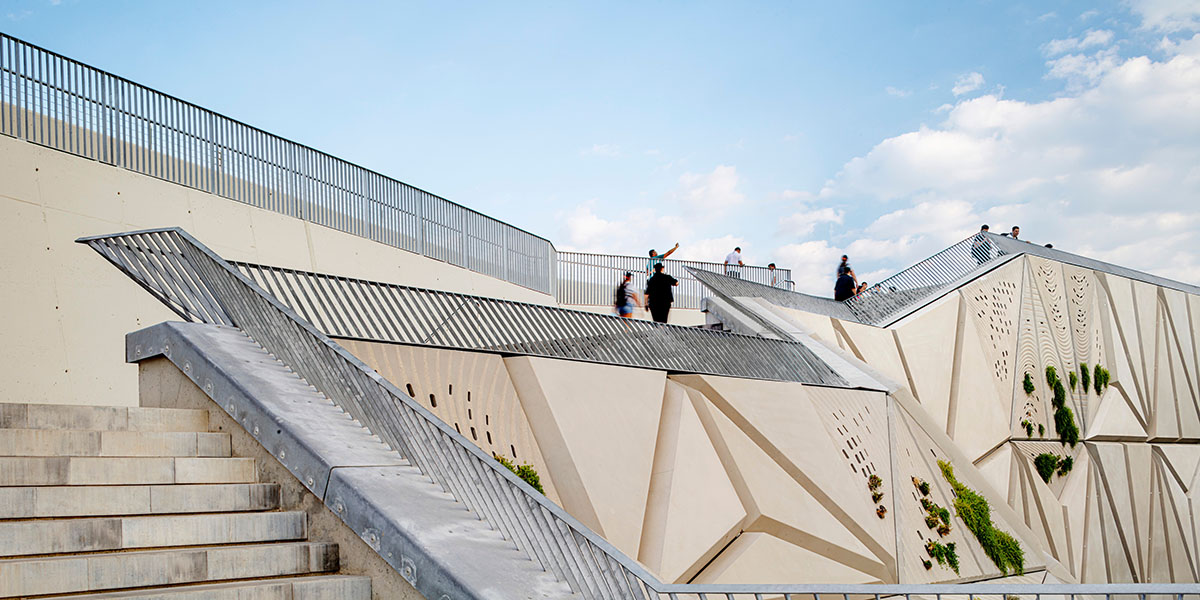 The project includes a walkable architectural façade consisting of a staircase and an elevated walkway rising +9.30 meters.

Through this urban planning intervention, the studio aimed to improve the public access of the area around the W Hotel.

The project was completed as part of the framework of the PlanEspecial for the Nova Bocana of the Port of Barcelona, who were the commissioners of the project.

The project interprets a special port context: the connection develops a new relationship with the W Hotel, where the strong tides of the sea coexist with a unique concentration of people and users who carry out a variety of outdoor and leisure activities on a daily basis. 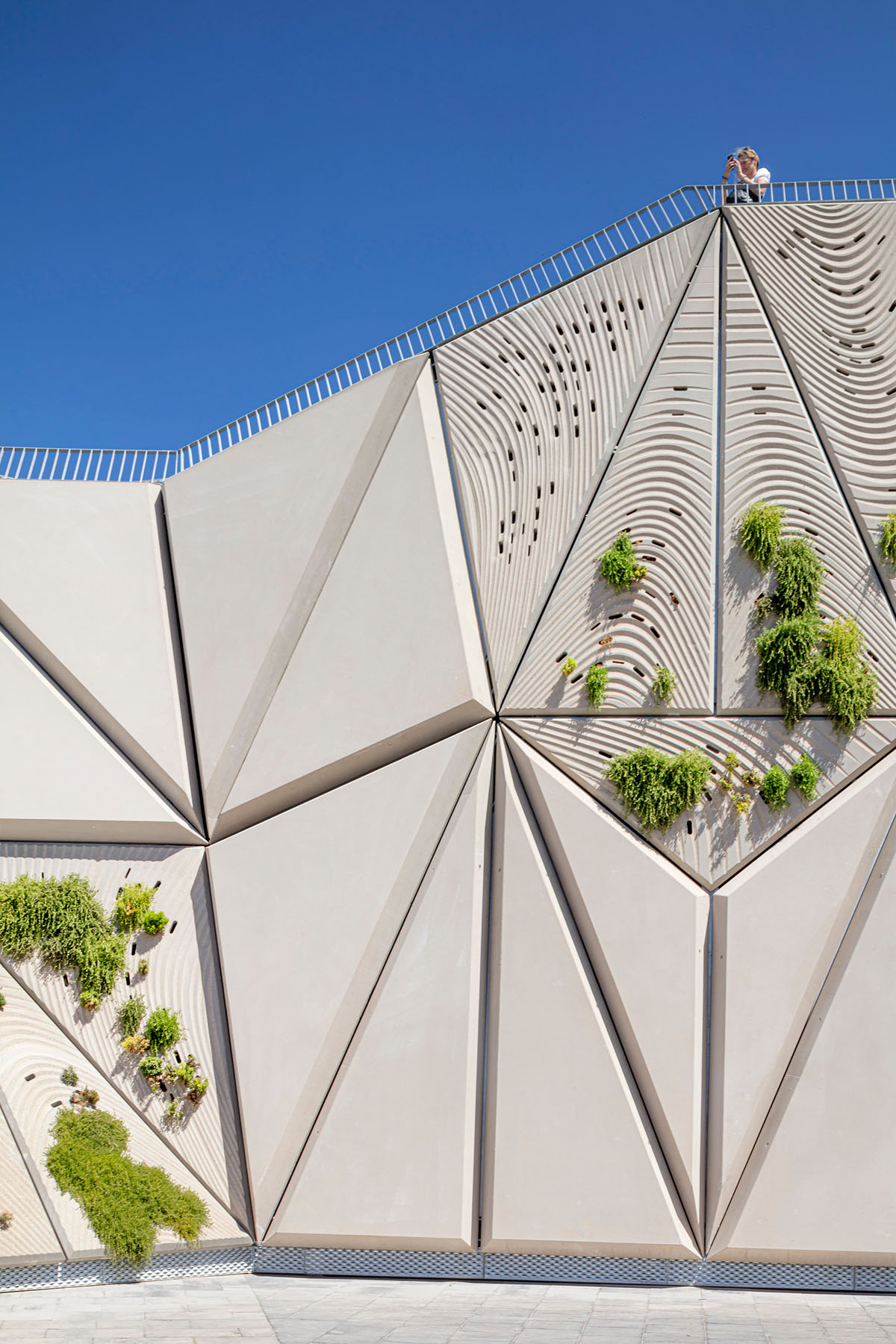 According to the requirements of Nova Bocana, it was necessary to design a solution that eliminates the existing cul de sac and connects the two different levels using the existing seawall as support. This provided an opportunity to generate a new façade for the Passeig del Mare Nostrum.

"This project, on the one hand is inevitable, and on the other, very representative," said Carmelo Zappulla, founder of External Reference.

"The culmination of Passeig del Mare Nostrum with a walkable façade is proposed as a fundamental element that reconfigures the city's relationship with the sea," Zappulla added. 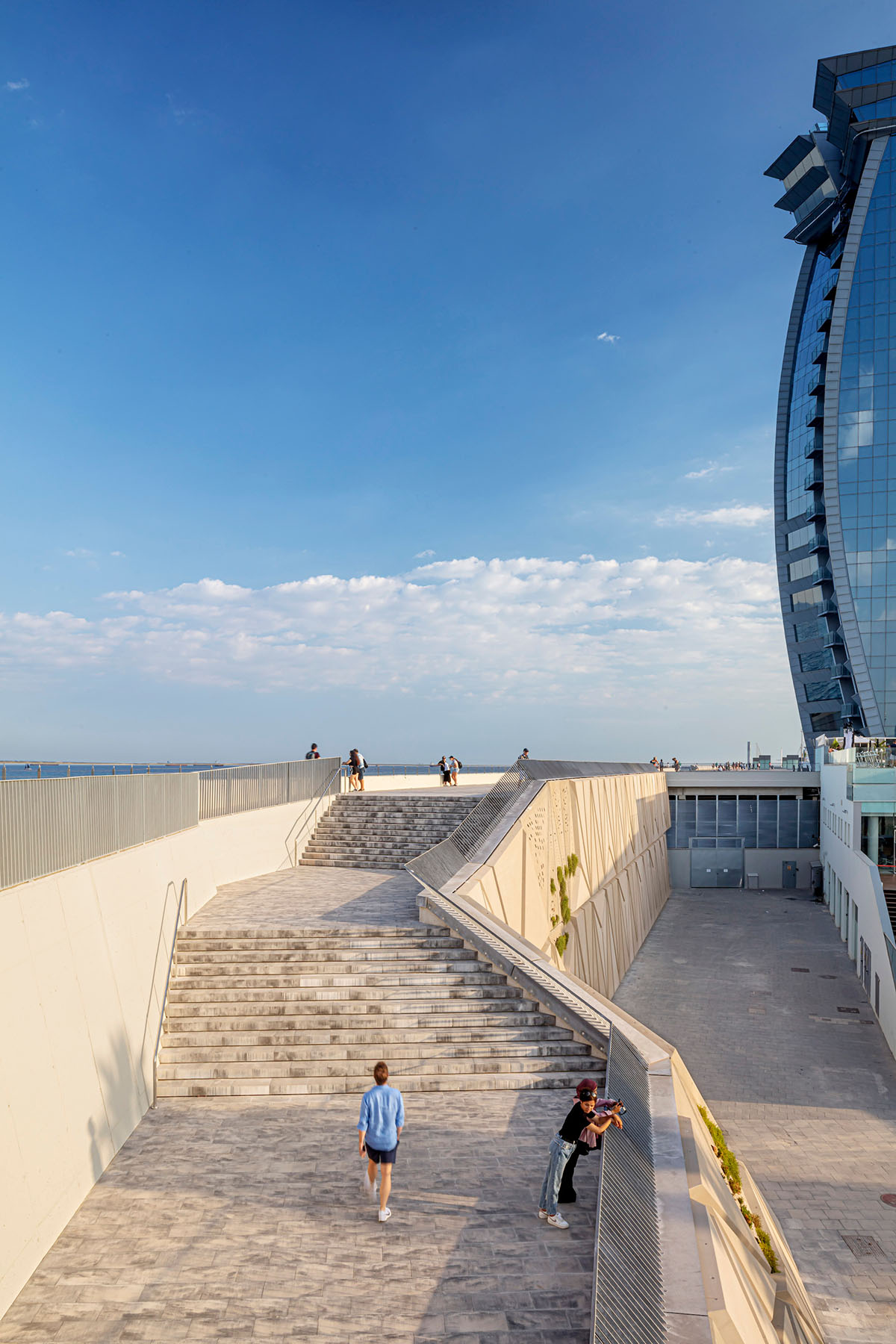 The studio conceived the design as a tectonic element based on a morphology derived from the formations of salt crystals that grow in the small Mediterranean water reservoirs, captured by the irregularities and accidents of the marine rocks.

Based on this phenomenon, the staircase "crystallizes" in the existing nook at the intersection of the promenade of the Barcelona coastline and the monumental seawall that protects it from the rush of the Mediterranean tides.

From a compositional point of view, the project is developed as a sculpture between the existing seawall and the new façade that opens up to the promenade.

Thanks to its sculptural presence, it invites the public to experience a new urban space that projects towards the sea and generates a balcony overlooking the Mediterranean and the city.

The new promenade is made of a prefabricated concrete structure, while creating a new façade. Its seafront promenade is clad with triangular concrete bio-receptive panels that incorporate the use of low-maintenance vegetation and a lighting system.

According to the studio, the panels were optimized by using parametric strategies, and were designed in a way that encourages the surface growth of native plants such as Lobularia Maritima, Lampranthus Spectabilis, and Drosanthemum Floribundum. 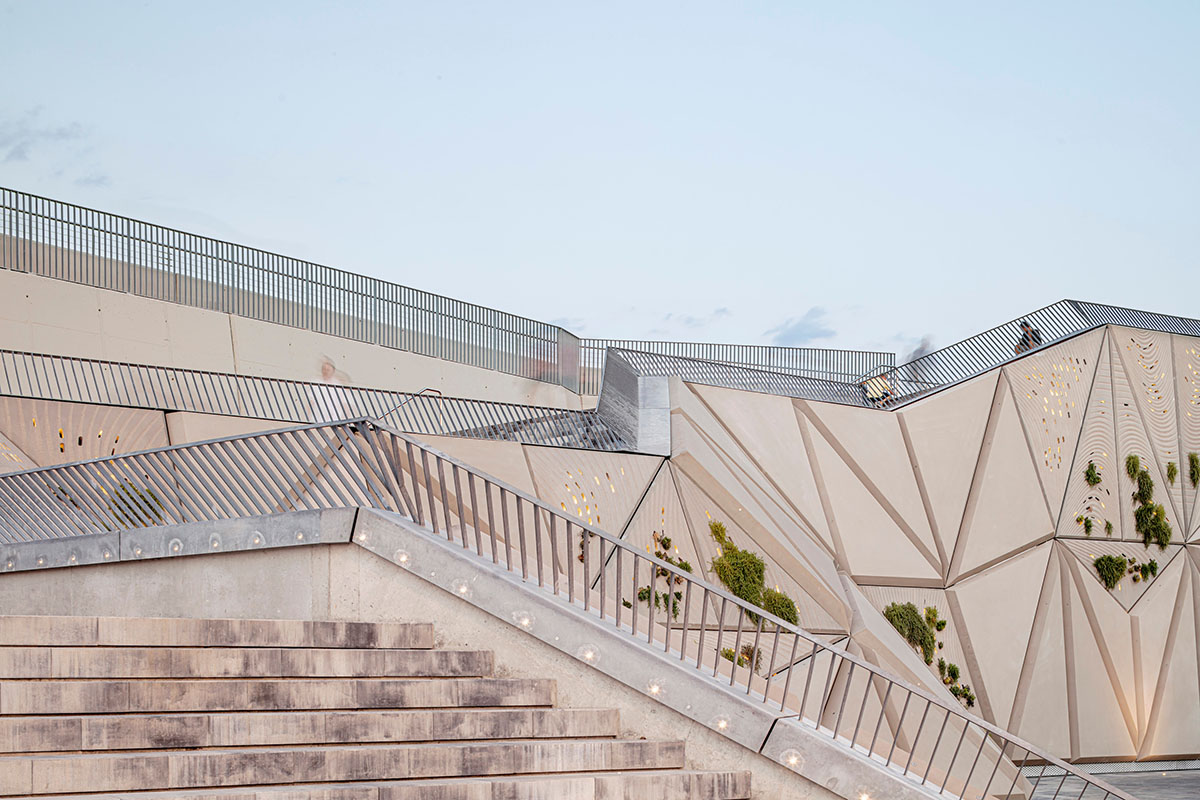 "We have designed a unique place for the city, and a space where you can not only appreciate looking towards the horizon of the sea, but where you can also discover new viewpoints of Barcelona, the great protagonist of the project," Zappulla explained.

"We believe that the path will act as a catalyst that transforms the dynamics between the square and the promenade which, although adjacent spaces, until now had separate activities."

"They are now dialogic parts of a chain of discoveries and experiences that pass through Escaleras y Mirador Vela," Zappulla added. 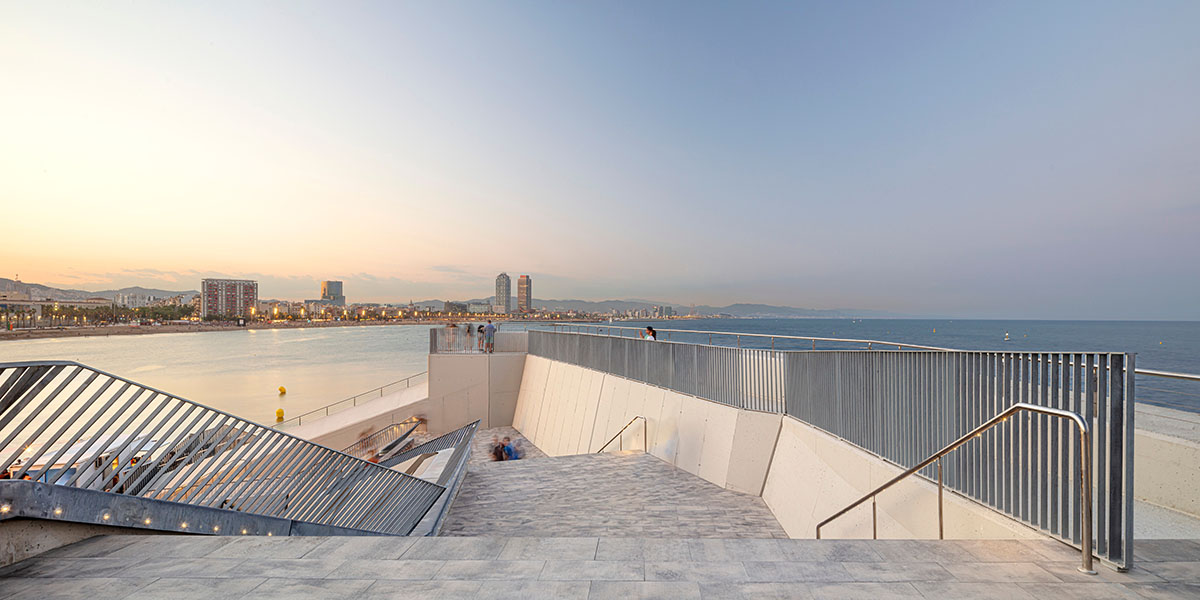 A reinforced concrete stairway consists of 48 steps that bridge an 8.50-metre difference in height along a linear route of 48.45 meters. 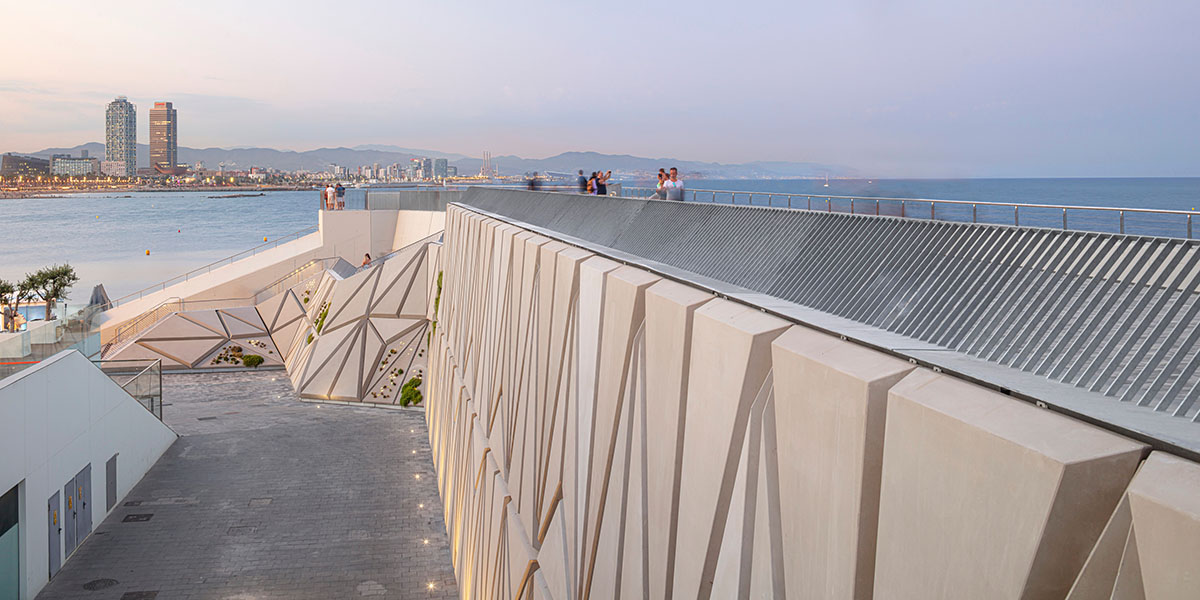 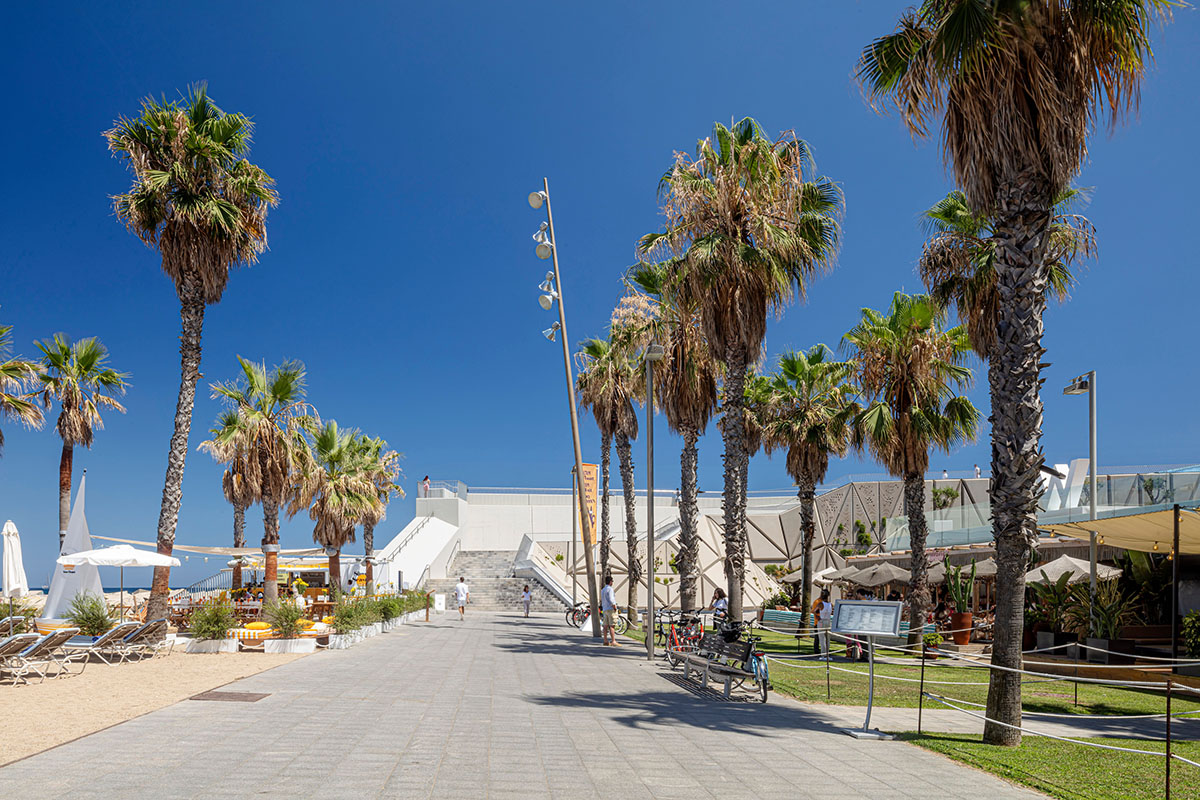 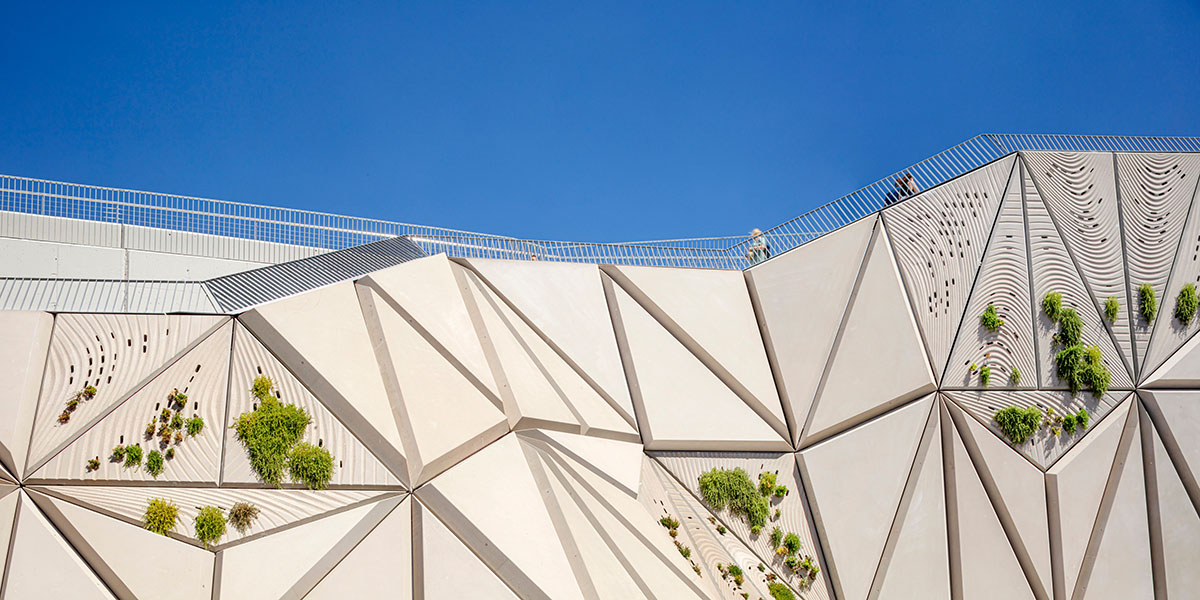 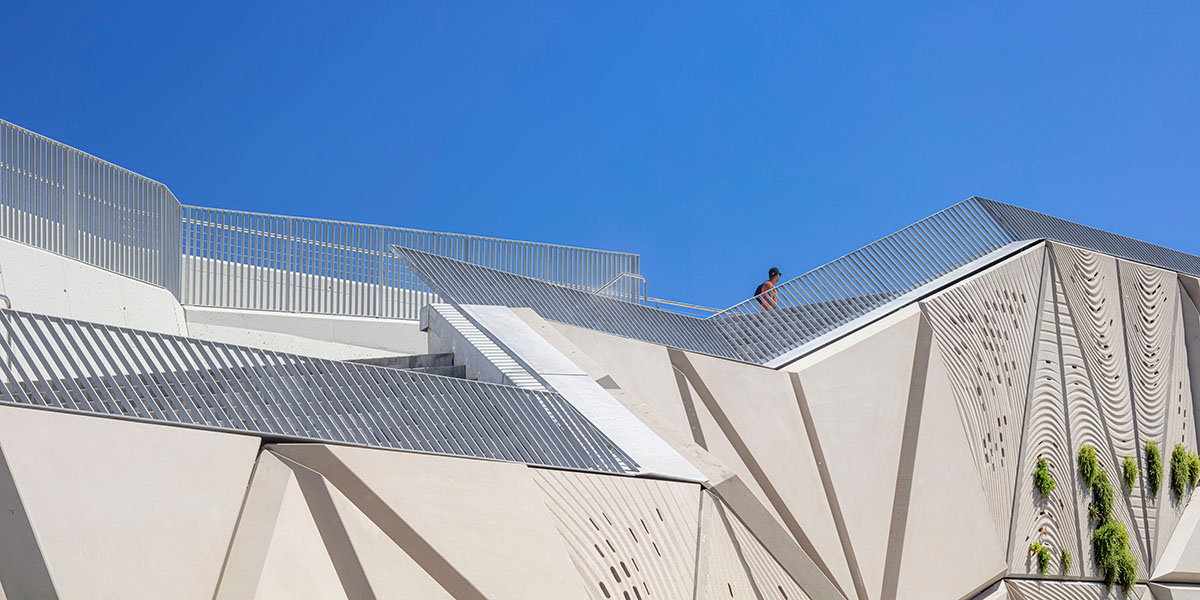 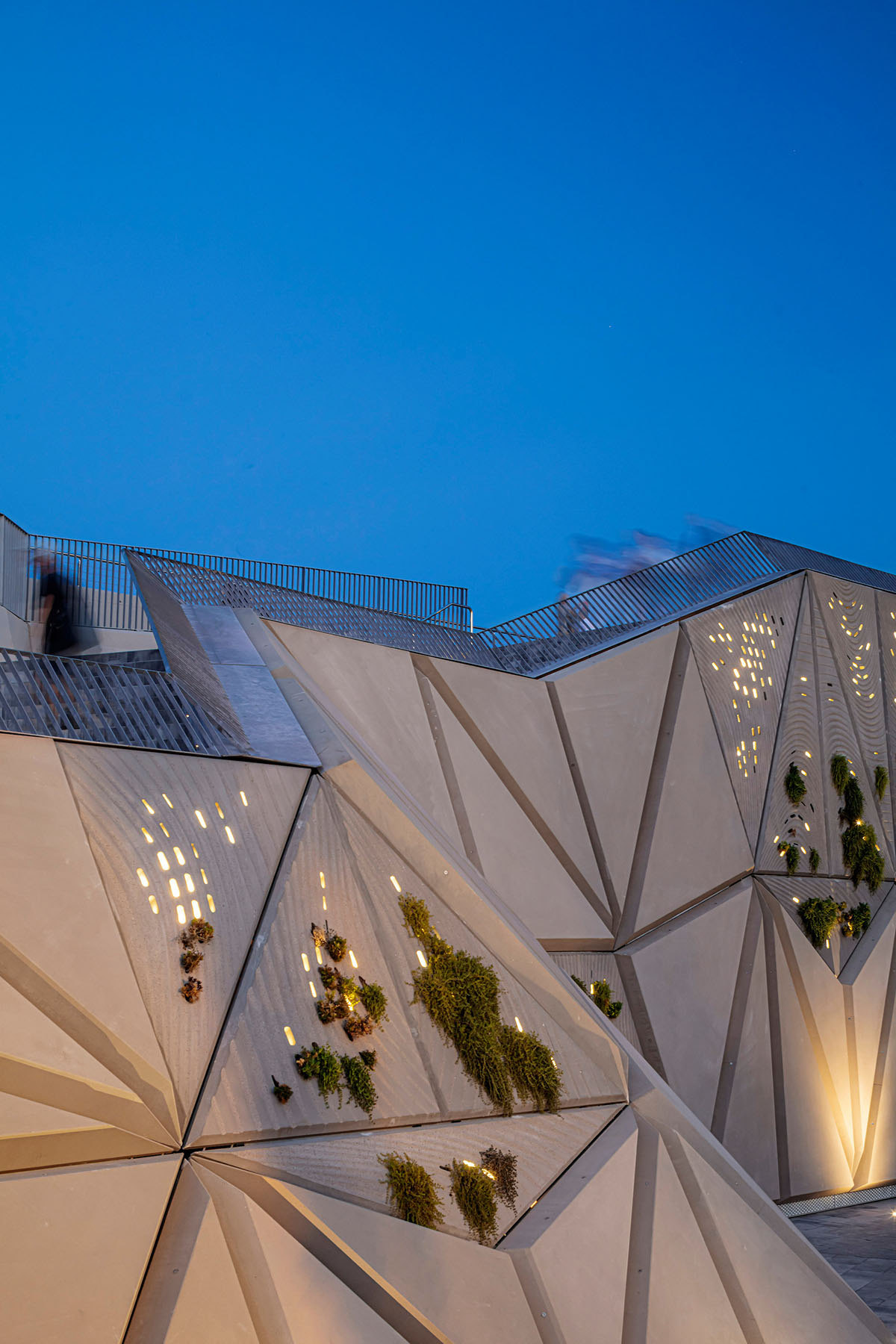 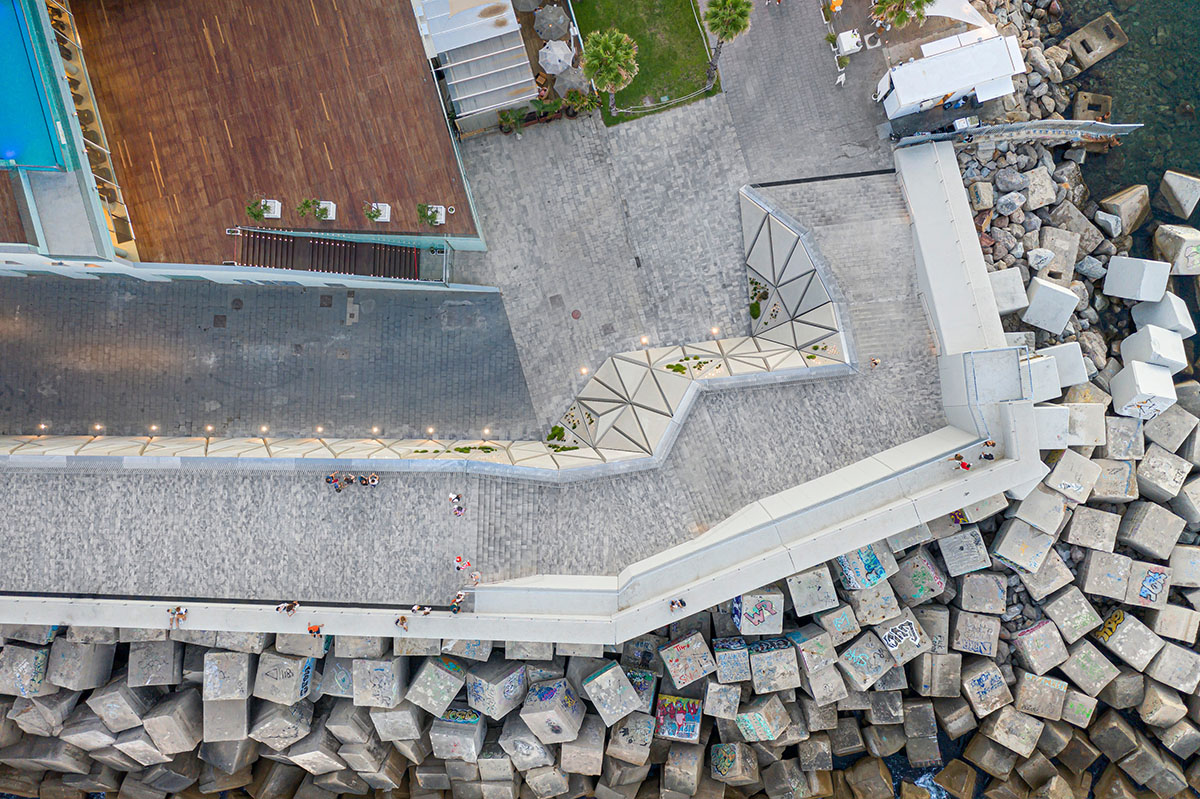 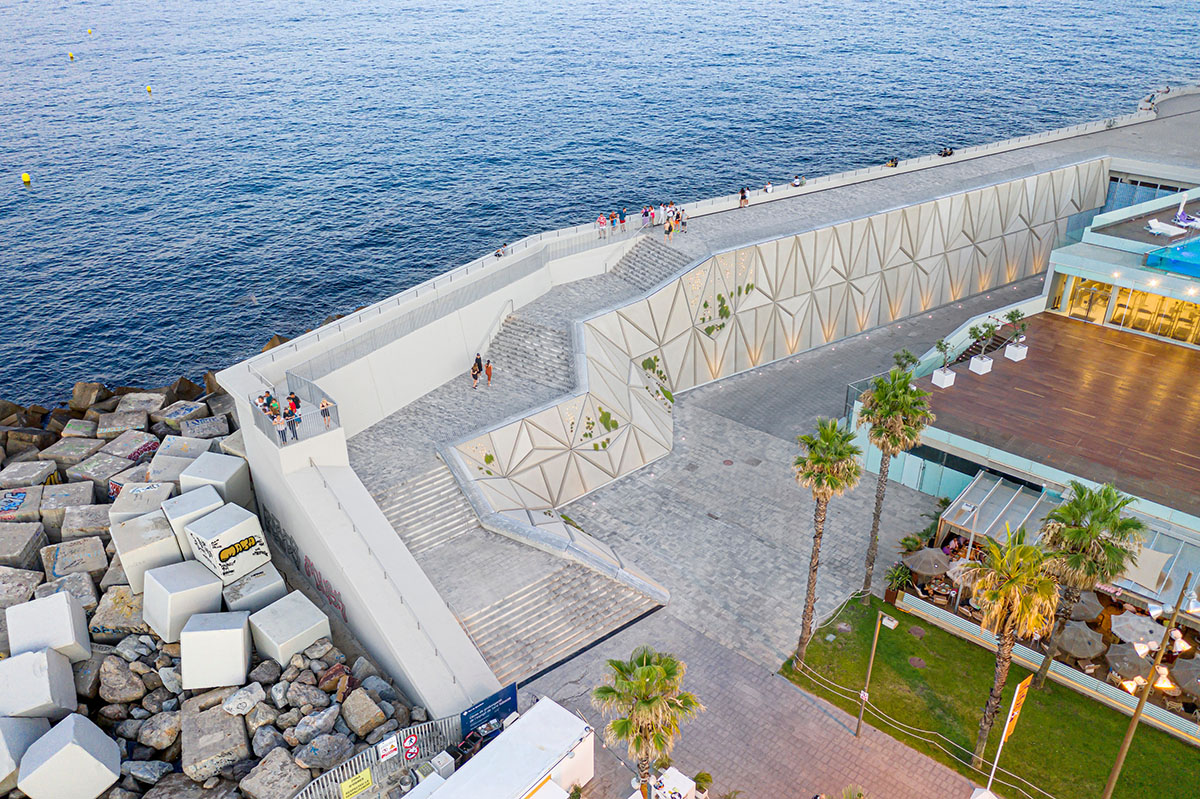 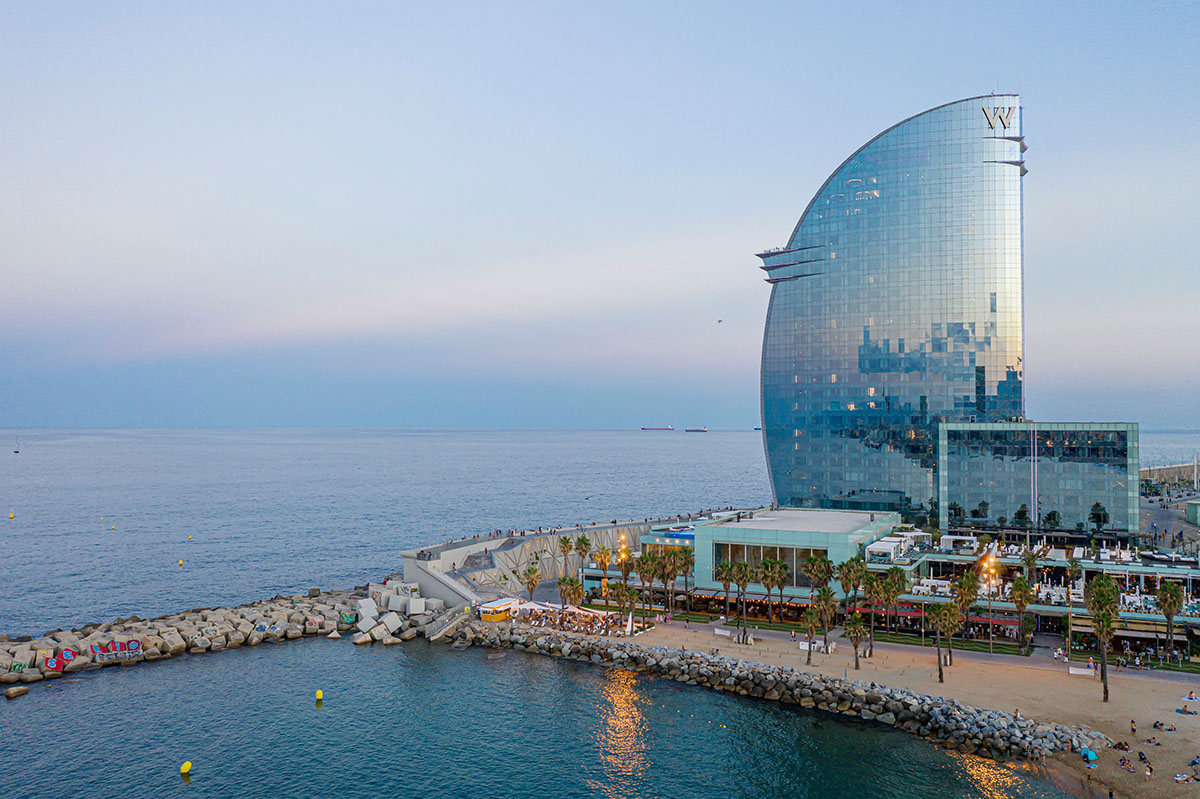 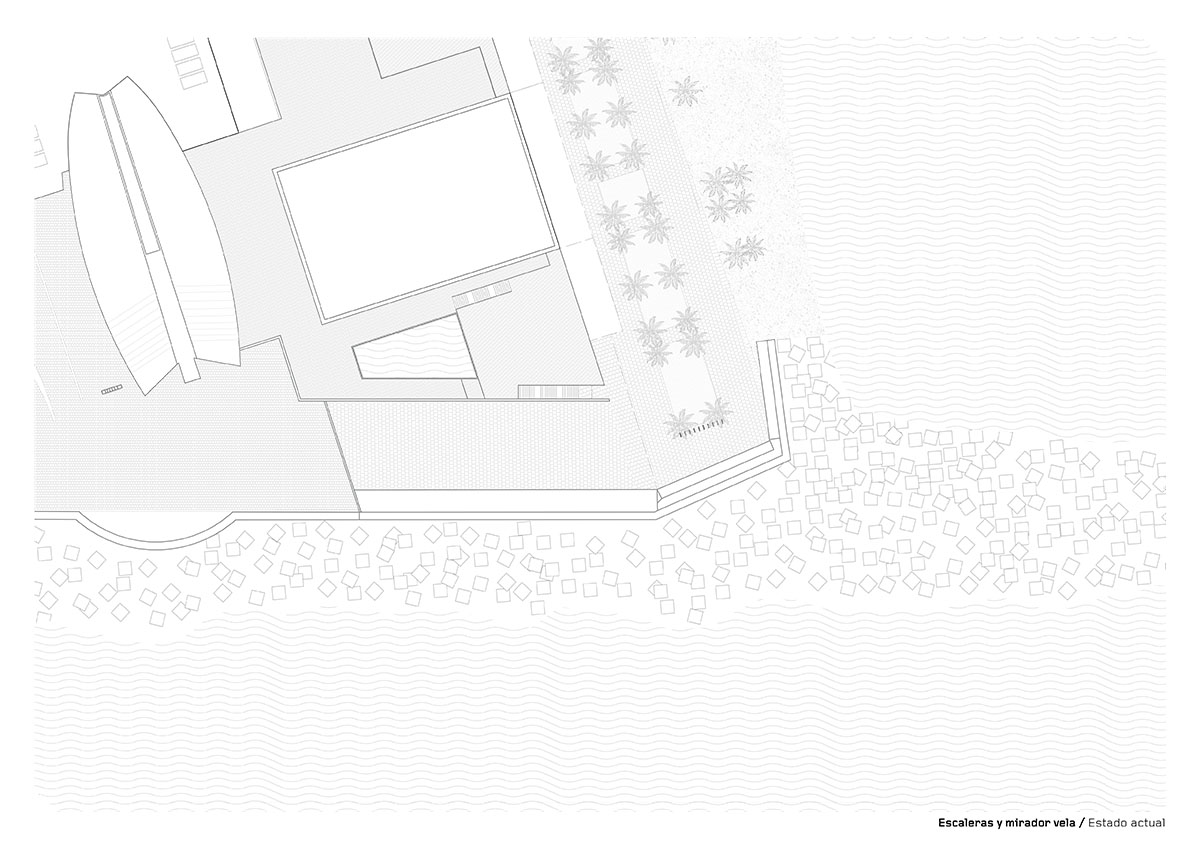 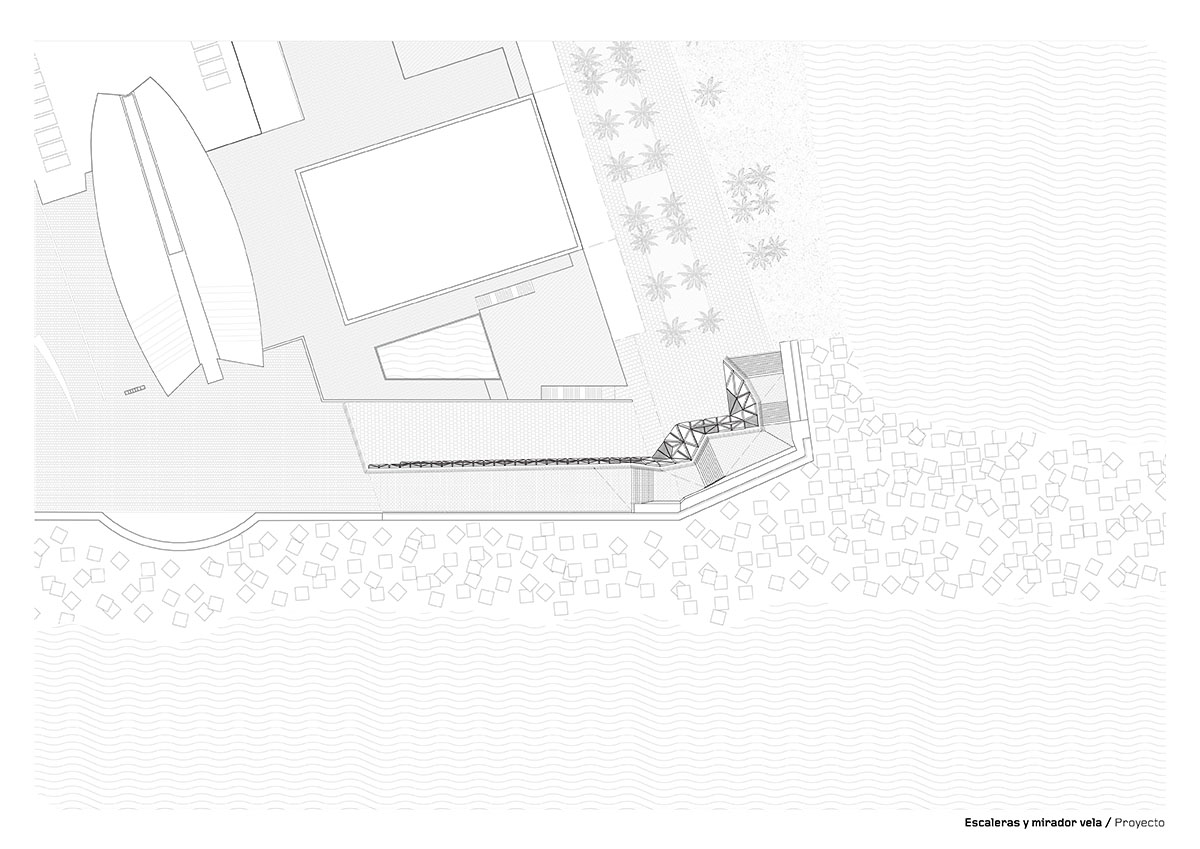 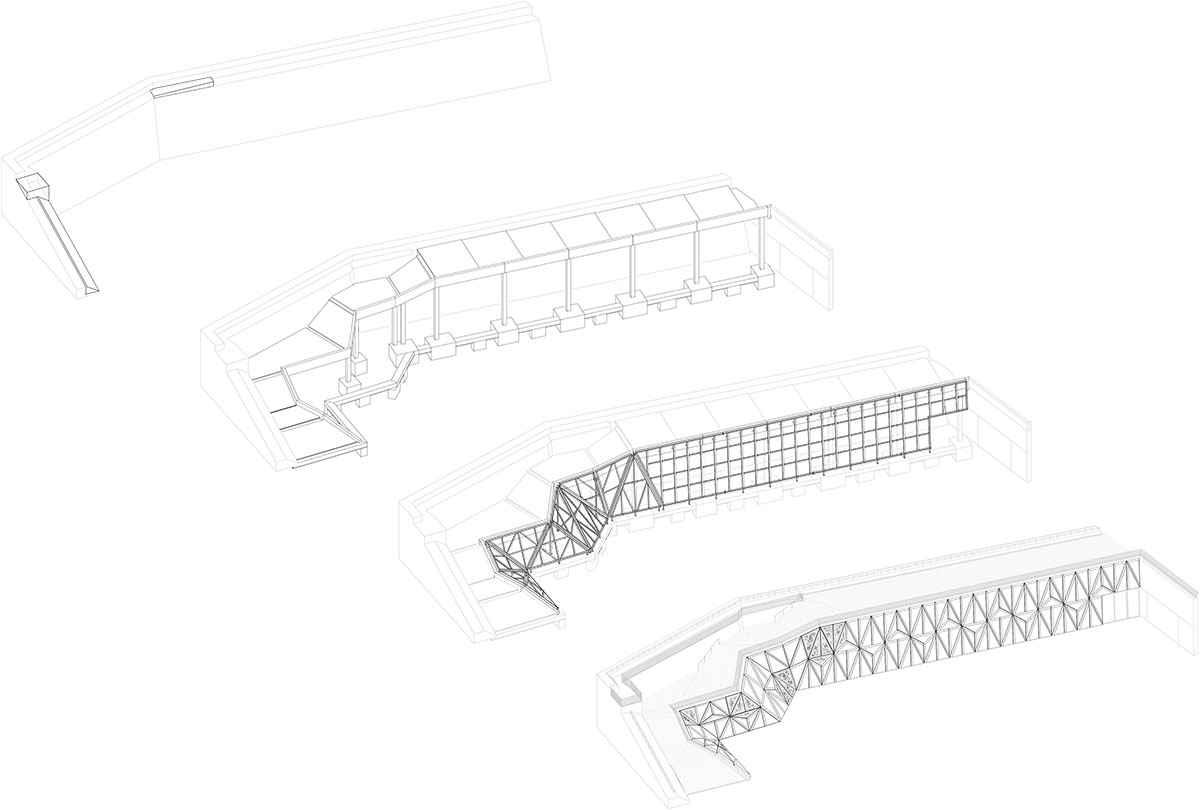 External Reference is an award-winning Barcelona-based architecture firm founded in 2007 and led by Carmelo Zappulla.

The studio has an extensive experience in commercial, interior, and exhibition design. The firm creates experimental spaces that break the boundaries between architecture, art, and digital tools.