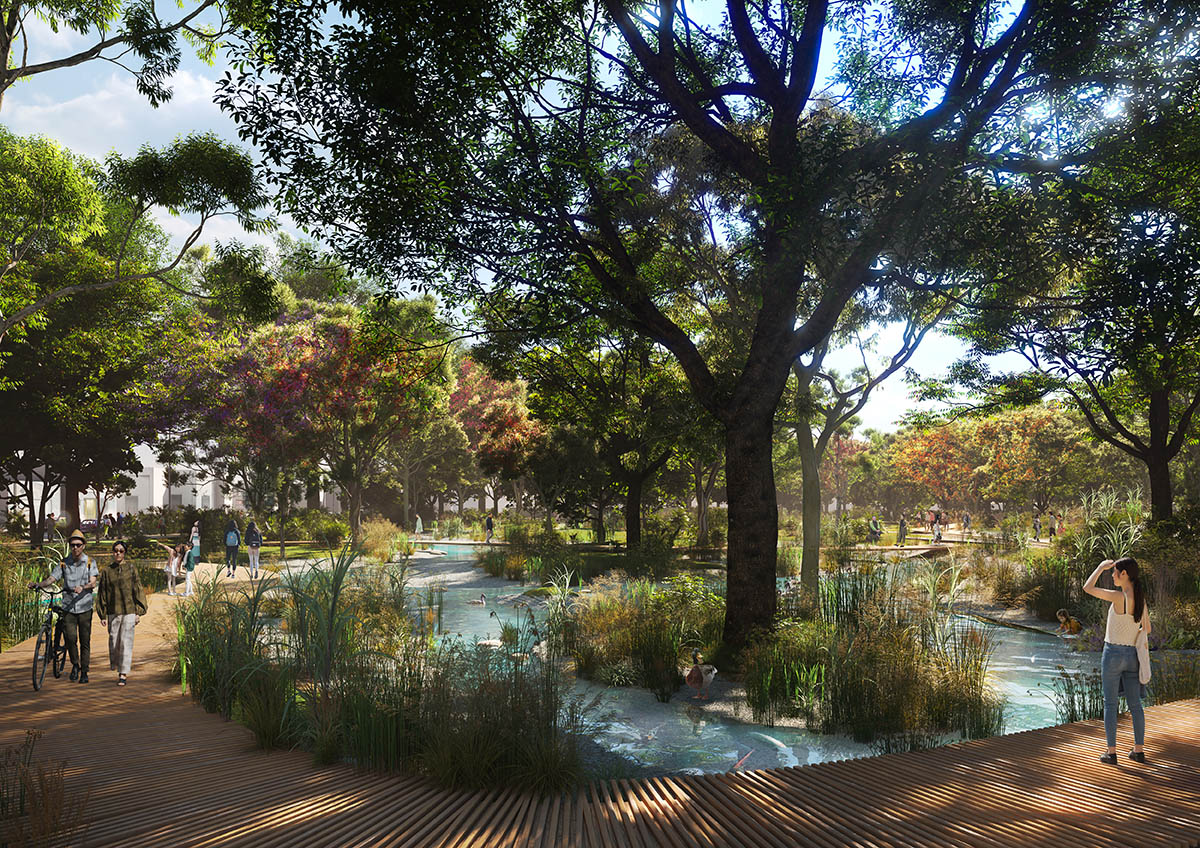 MVRDV's proposal, titled Hoowave Water Factory, has been selected as the winning design by the Taiwan Ministery of Economic Affairs to devise a large-scale masterplan of Huwei’s Beigang and Anqingzhen waterways in Huwei.

The porposal combines both a strategic masterplan and a landscape design, aiming to modernise the town’s waterway network and removing the purely mono-functional approach that controls and directs water.

Instead, the town will soon embrace a new system that captures and stores water for use and gives space to the river, to nature, and to urban life. 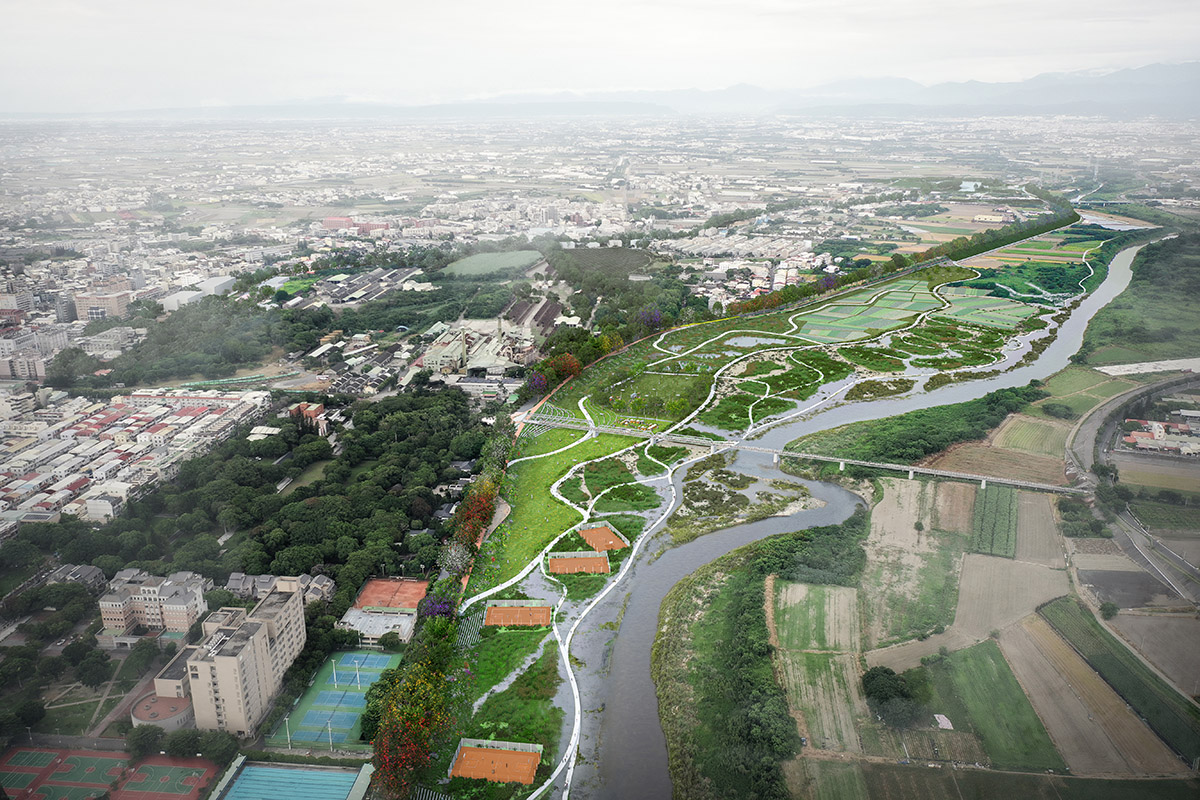 The masterplan will provide the town a comprehensive strategy for flood resilience while improving the quantity and quality of the town’s available water. The masterplan will also integrate mobility networks such as cycle paths, cultural amenities, and ecological systems to create new connections between Huwei, its citizens, nature, and the river.

Huwei is an inland town of around 70,000 people located on the Beigang River, the town developed in the early 19th century around its sugar factory.

Although the sugar factory still operates, a connected alcohol factory was closed in the 1970s, becoming overgrown with tropical vegetation, said MVRDV. 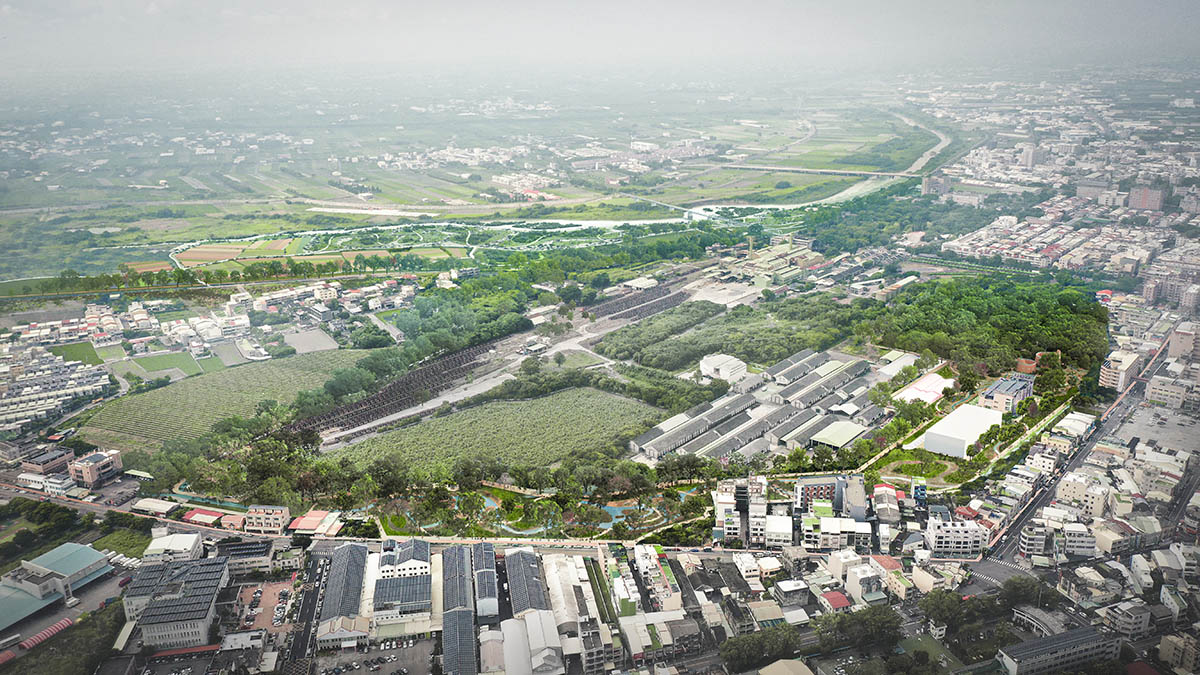 Today the factory grounds, along with a dike built to protect the town from the river’s floods, creates a significant barrier between Huwei and the Beigang River, according to the firm.

The town also suffers from water pollution caused by its urban and agricultural growth, and is unprepared for the more extreme floods and droughts that will come as a result of climate change.

MVRDV's design focuses on five goals: the new Huwei water system is conceived as resilient, ecological, connected, cultural, and feasible, given the fact that its completion is expected in early 2026.

In addition, a series of localised, naturally cleaned water buffering throughout the city are added to the masterplan, with the majority placed on larger, publicly owned properties such as schools to streamline their implementation. 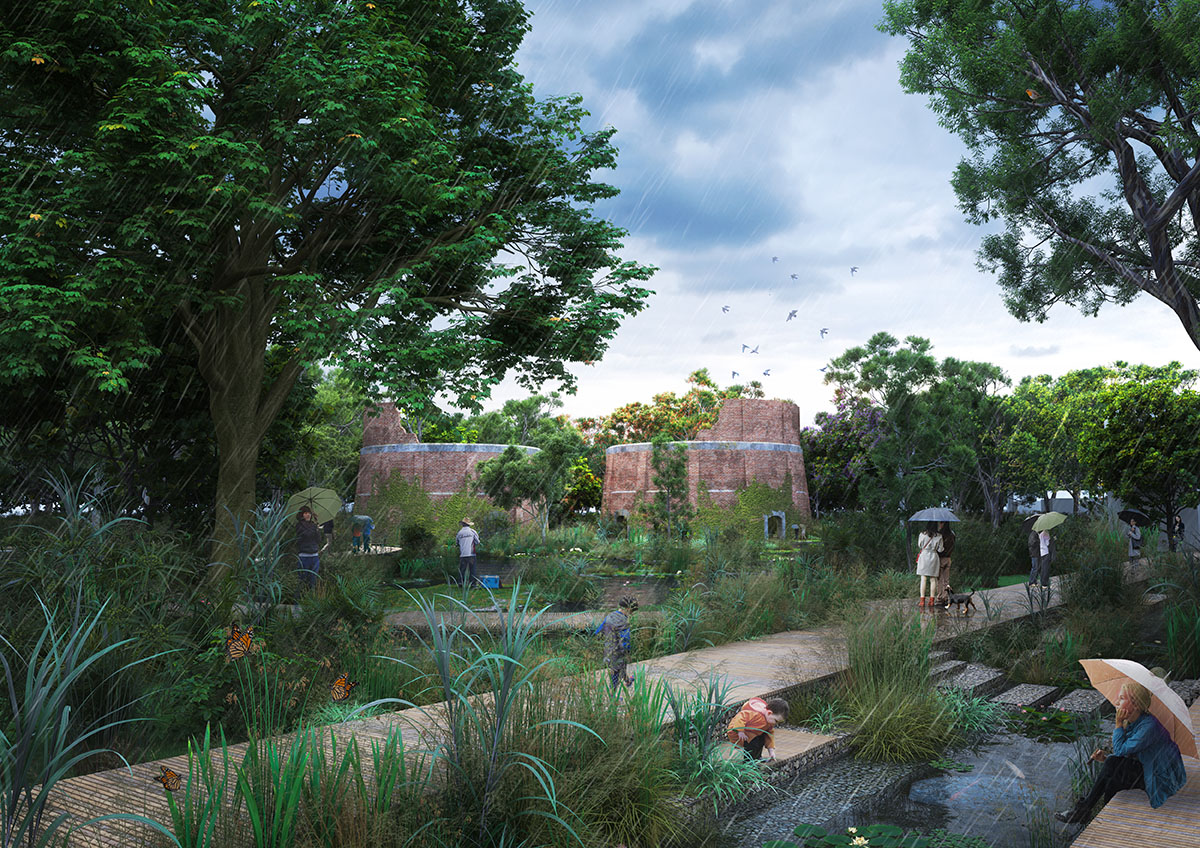 The plans also aim to purify and naturalise the Anqingzhen Channel, an irrigation canal running through (and in places, beneath) the town that has come to serve as a polluted and smelly wastewater drain.

MVRDV said that "the cleaned and naturalised canal provides the opportunity to open the disused portions of the factory, creating a park space in the heart of the town. By doing so, the Anqingzhen Channel can return to its former status as an important focus for leisure activities."

The project is led by MVRDV cofounder Winy Maas and he said: "By combining aquatic interventions with mobility and cultural attractions, we open the embankments of the river and canal to the town."

"Water buffers reduce runoff and help to increase biodiversity and to keep up with climate changes." 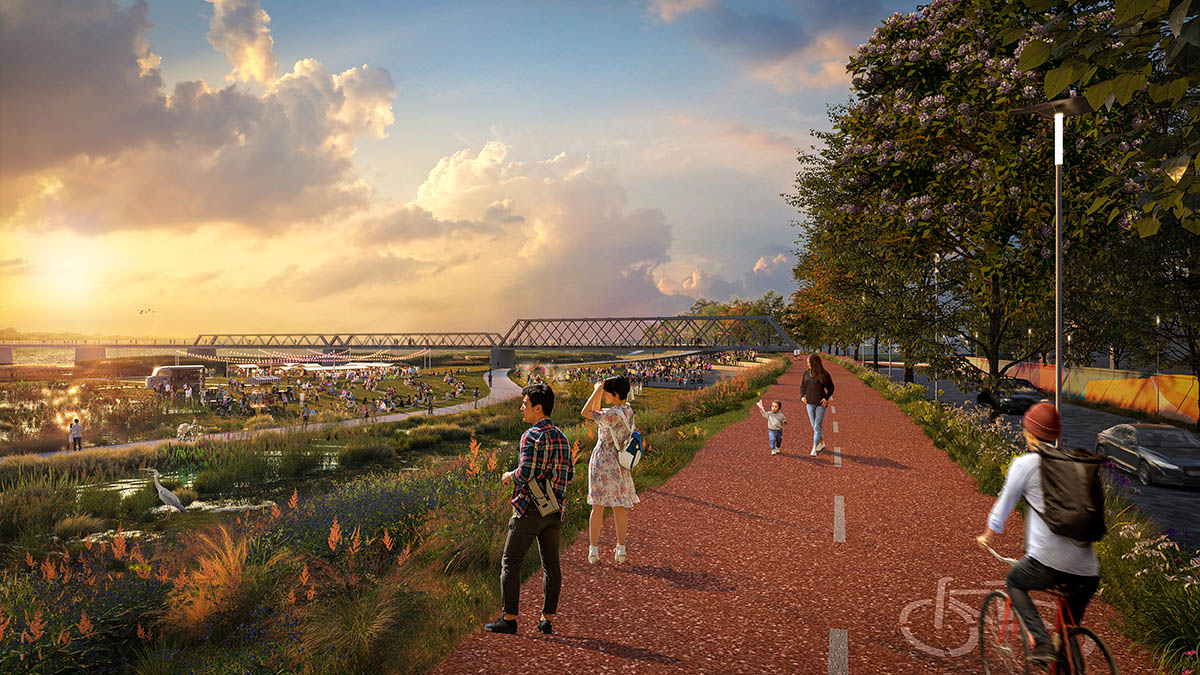 The team will transform the dike to the south of the town’s core into an accessible urban space so that the design can create connections to the waterside and open up the area between the river and the dike for further uses such as viewing platforms and sports fields.

The new uses in this area, now called Beigang River Park, are carefully considered along multiple criteria: split into multiple sections, they synergise with the town districts on the other side of the dike, while also taking into account the expected frequency of floods at various distances from the river.

The team will add three new cycle routes that use the now-accessible dike as their spine: one 2.7-kilometre loop around the boundary of the sugar factory; one 6.4-kilometre loop along the dike and back along the riverbank; and one 8.4-kilometre loop that connects the heart of the town to the Pinghe Flood Detention Pond in the east. 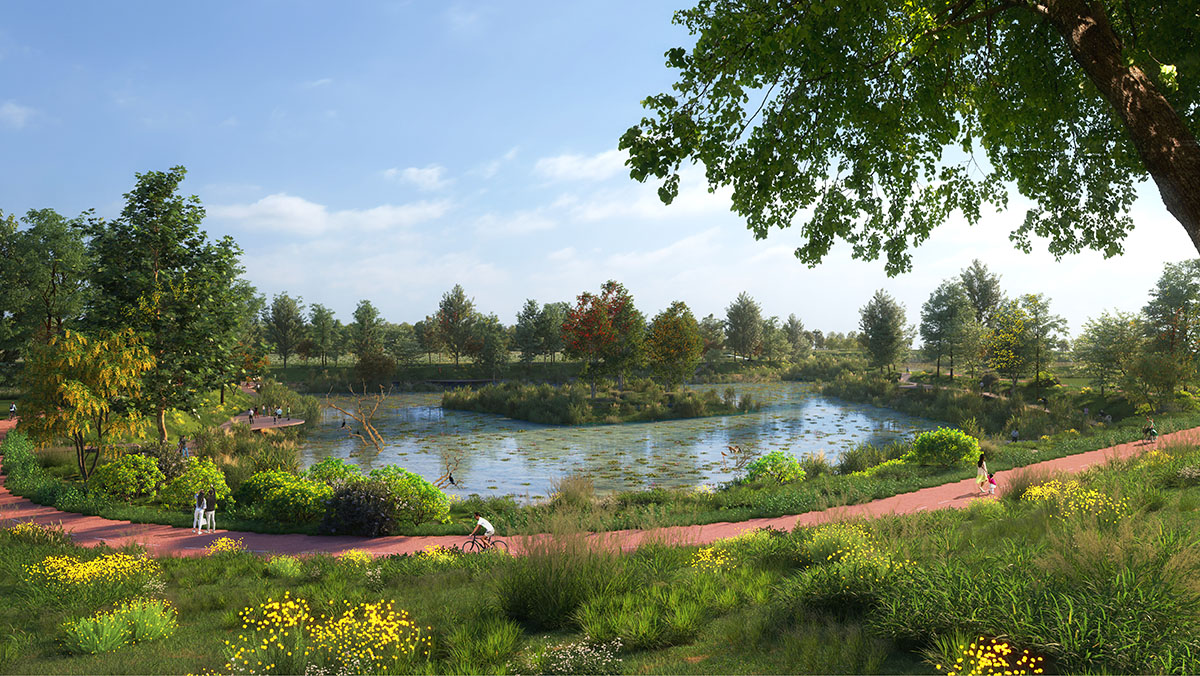 In addition to the Beigang River Park, the firm focuses on two more zones in the masterplan. The proposal for the Anqingzhen Waterland shows how a naturalised Anqingzhen Channel can become part of a forested park in the disused zones of the Sugar Factory premises.

Part of the city-wide flood control system designed to retain, purify, and reuse rainwater for leisure and biodiversity, the water levels of the Anqingzhen Channel here will vary according to the seasons, creating small islands for a number of leisure activities.

The other zone is the Pinghe Lake's design, which proposes that what is currently a flood detention pond can become an ecology hotspot, and a destination on the edge of the city for walkers and cyclists. 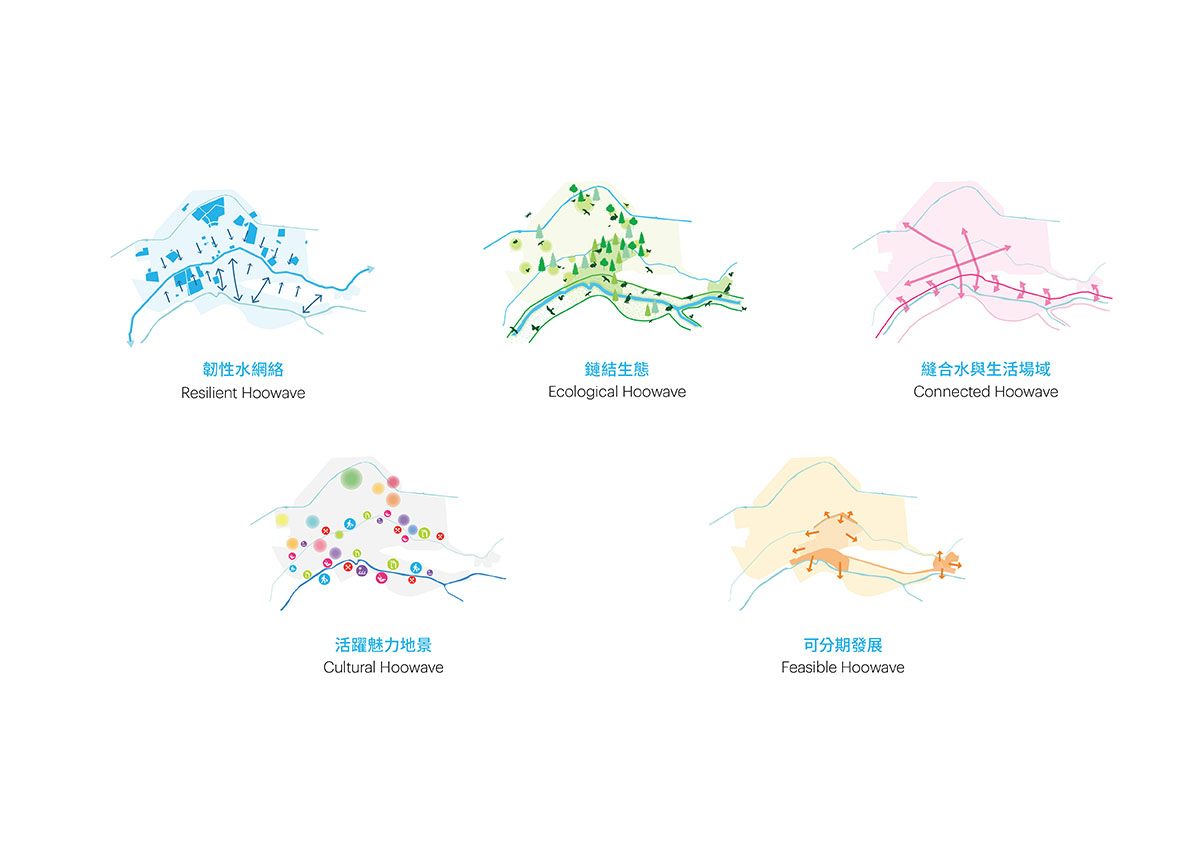 According to the studio, the masterplan of Hoowave Water Factory will provide water quality and health, which have the same priority as culture and economy.

Moreover, improved infrastructure and healthy ecological systems with integrated cultural amenities will make the river landscape more attractive, linking the city and the natural environment in a way that benefits all. 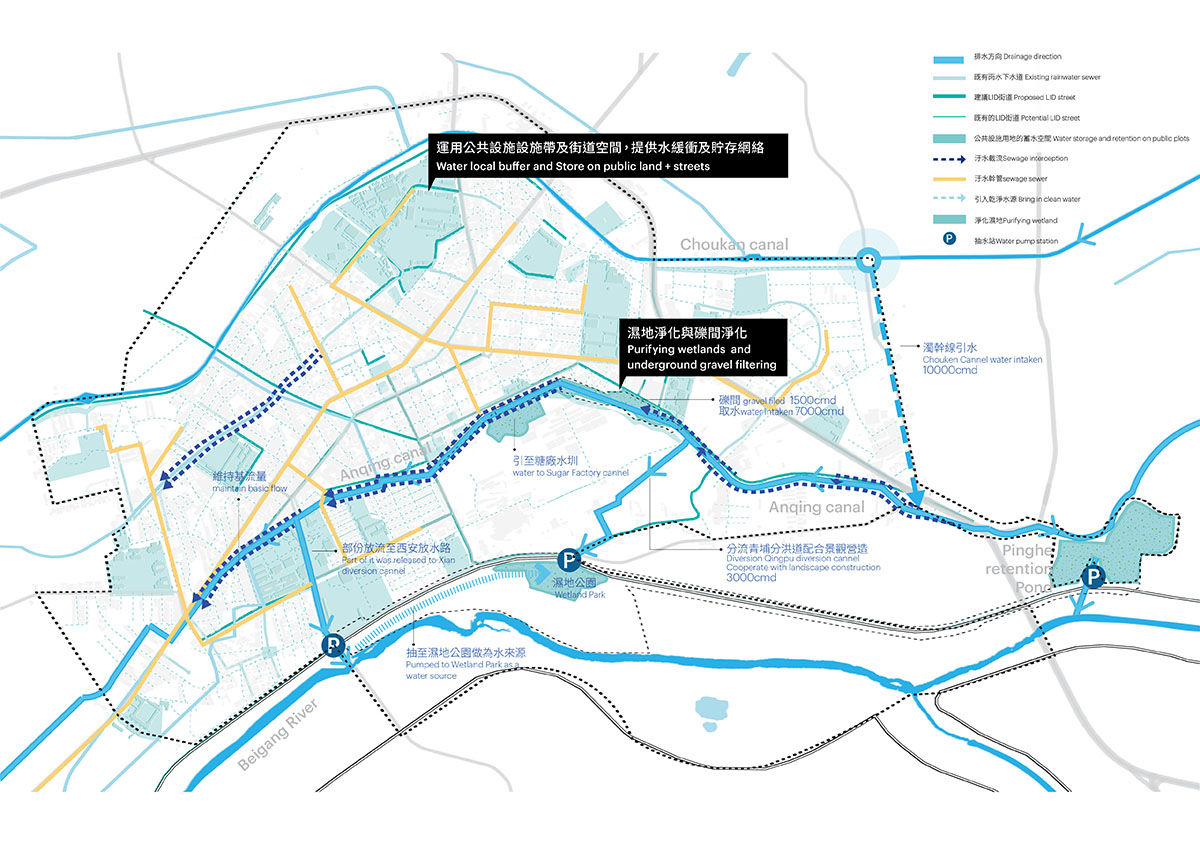 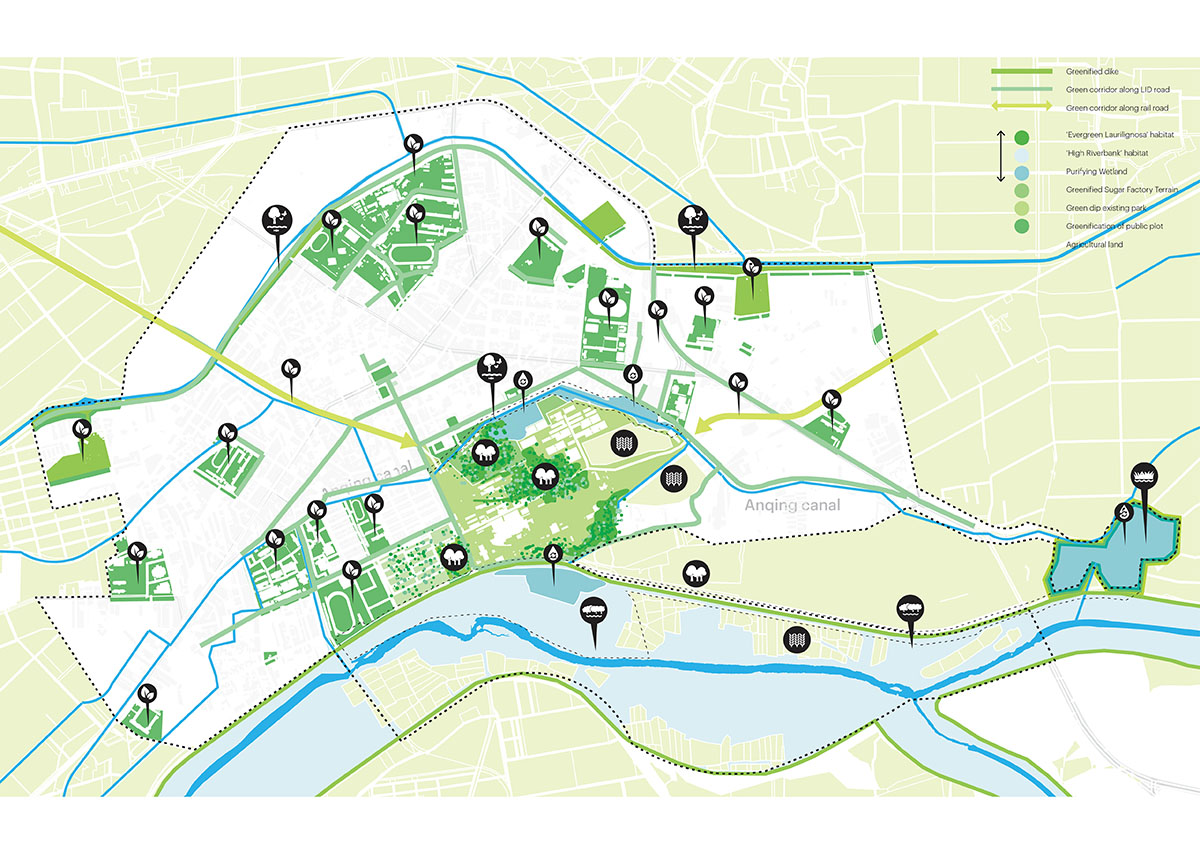 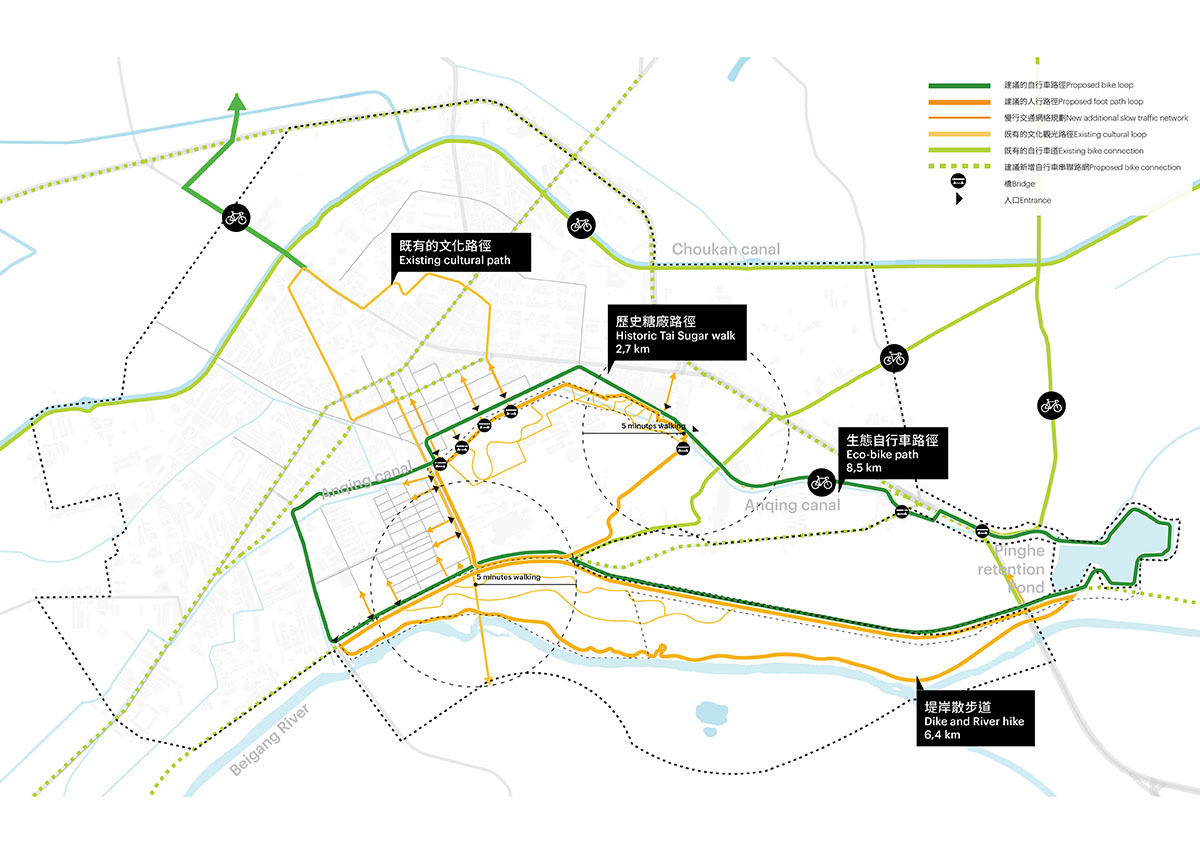 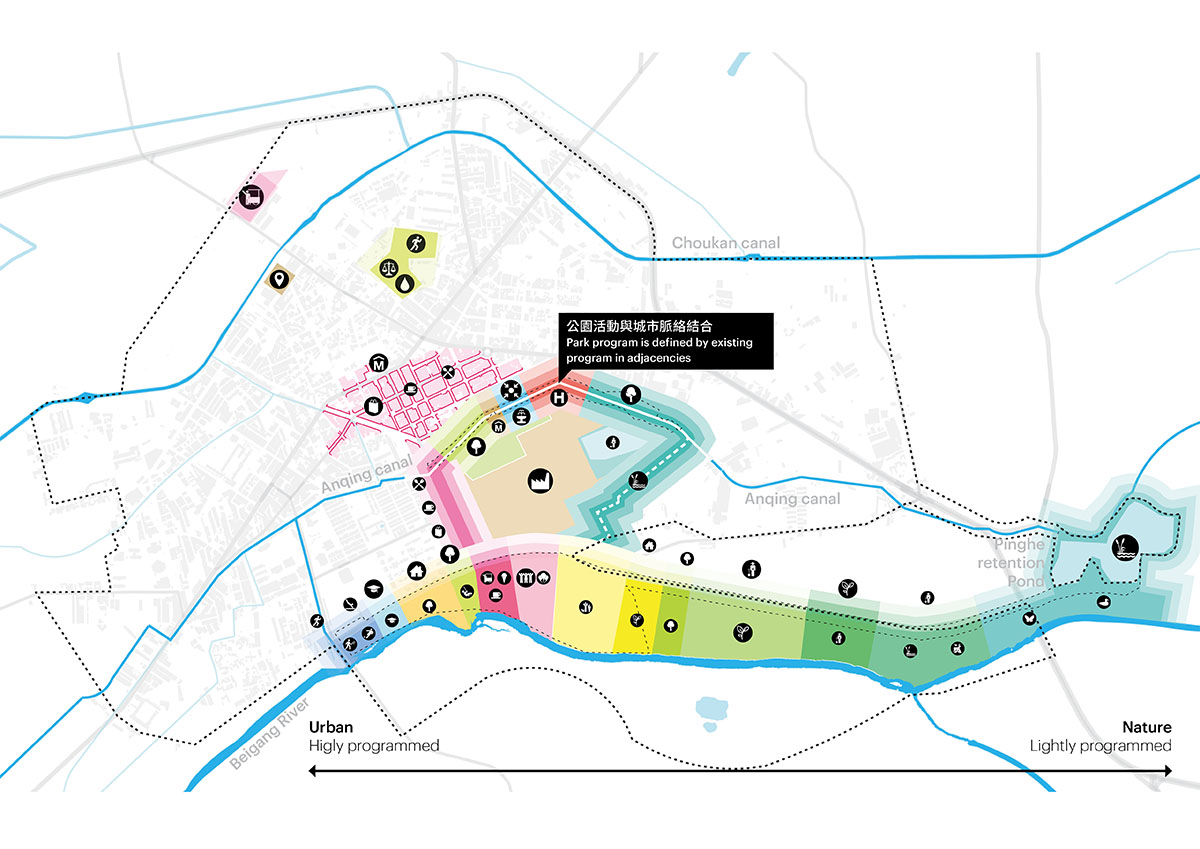 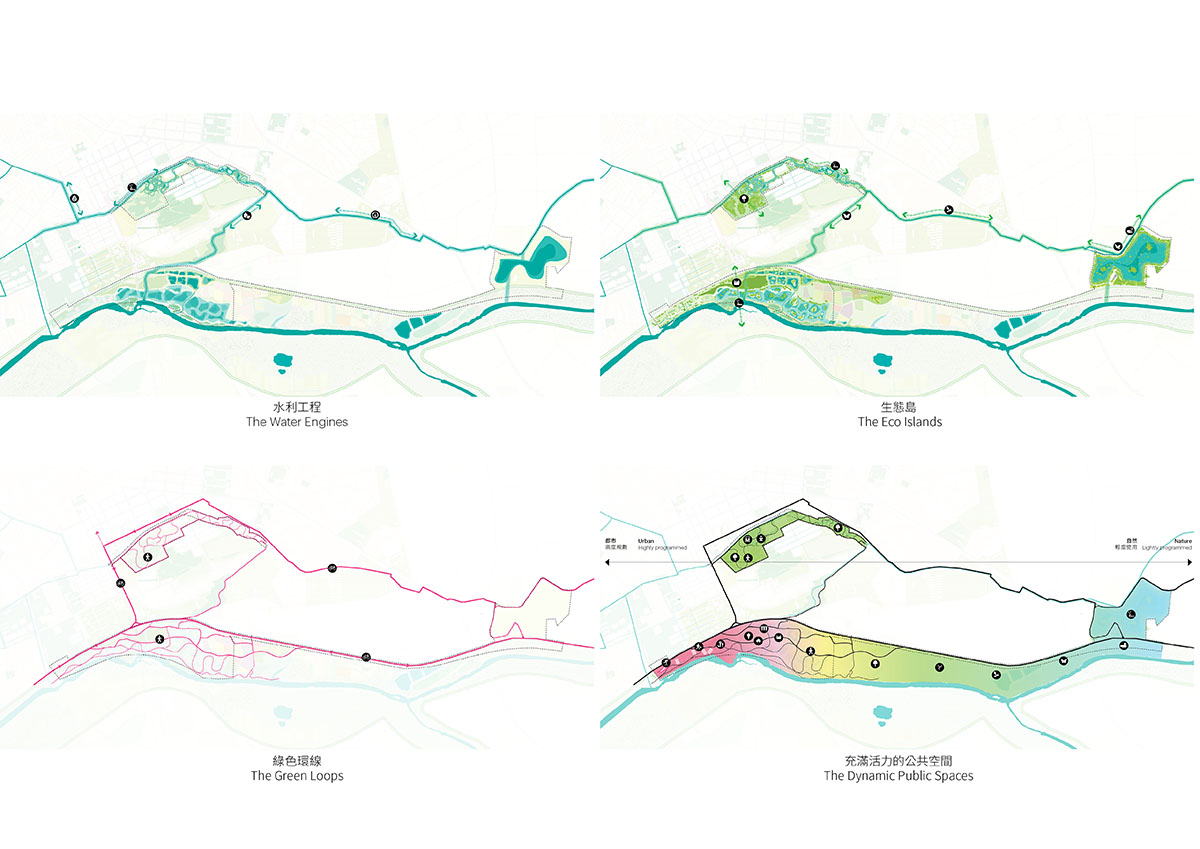 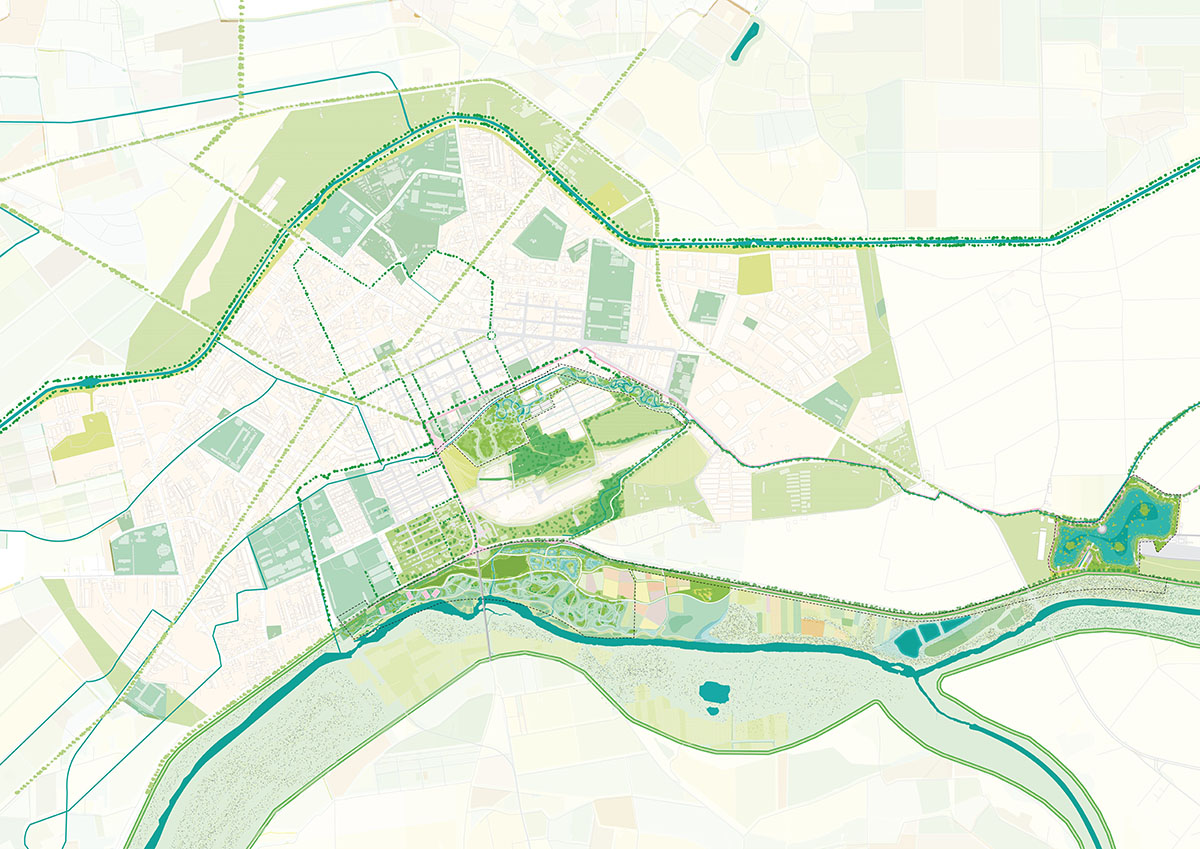 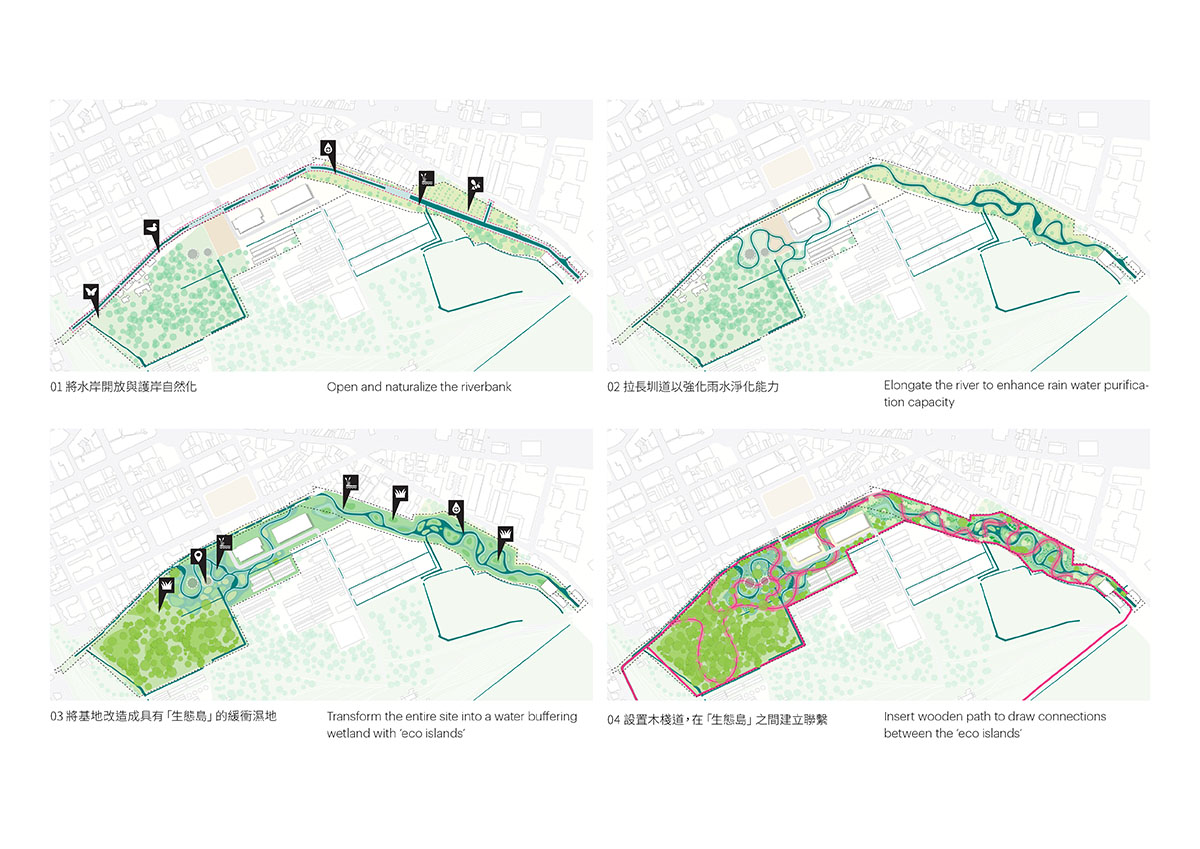 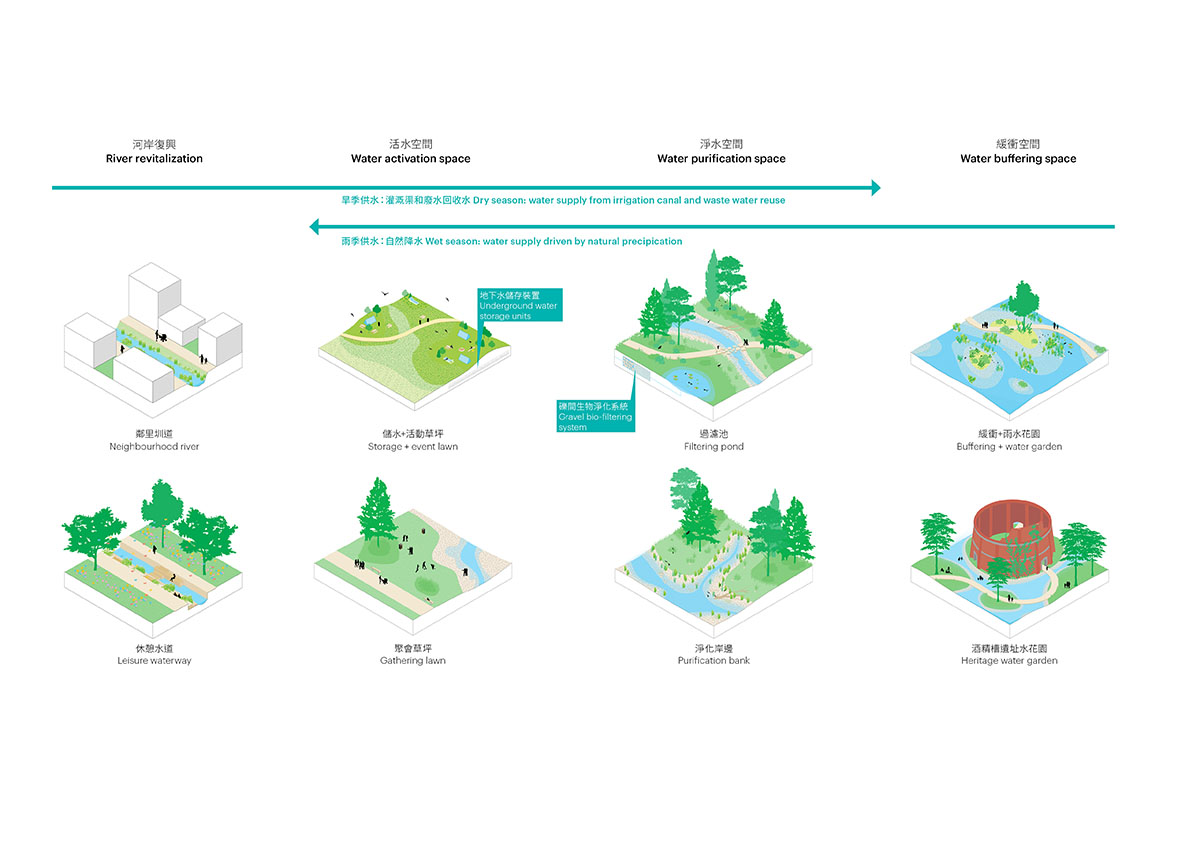 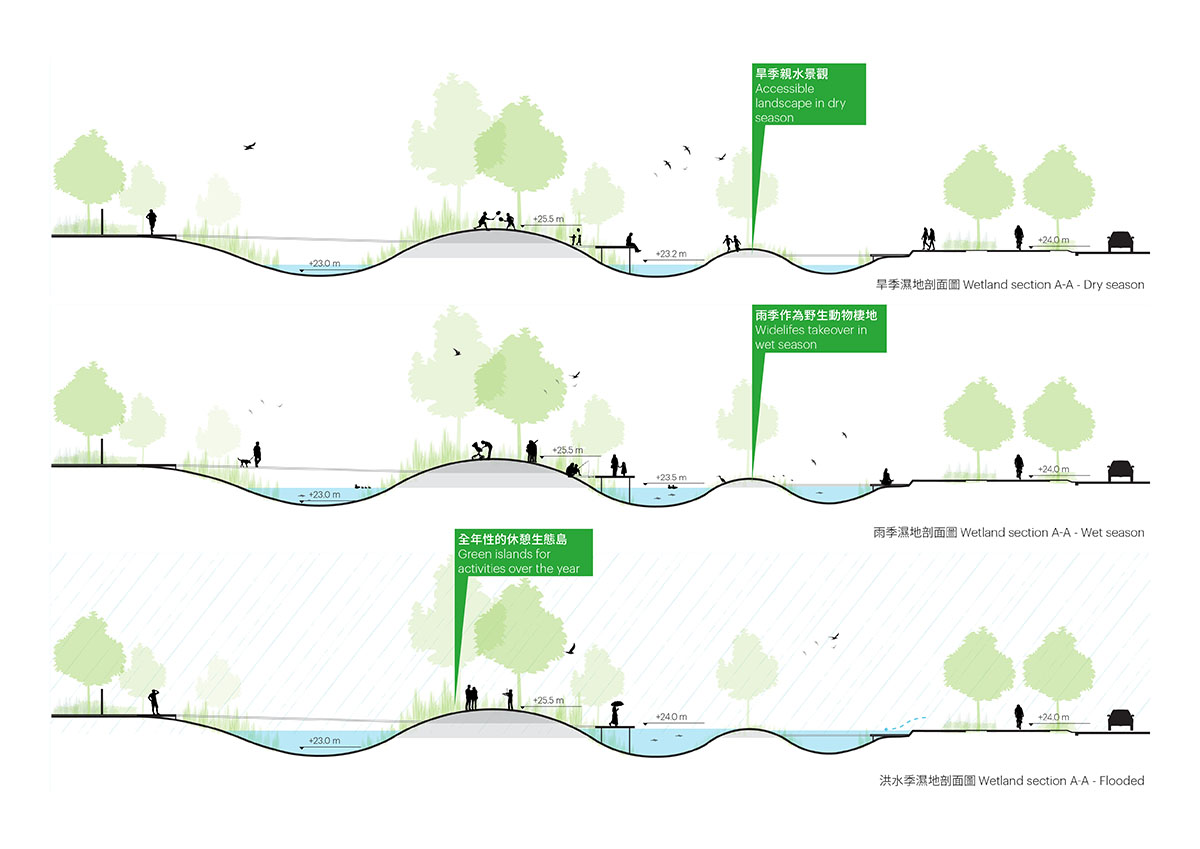 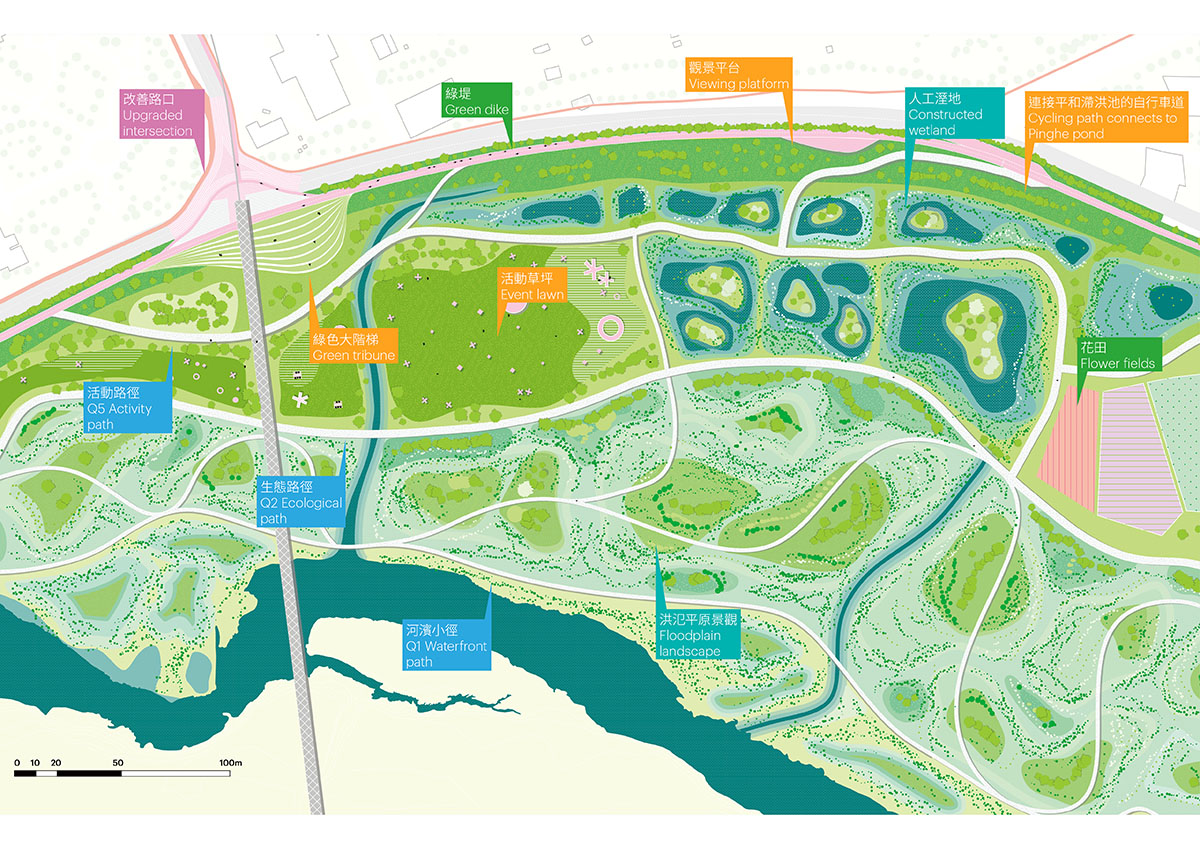 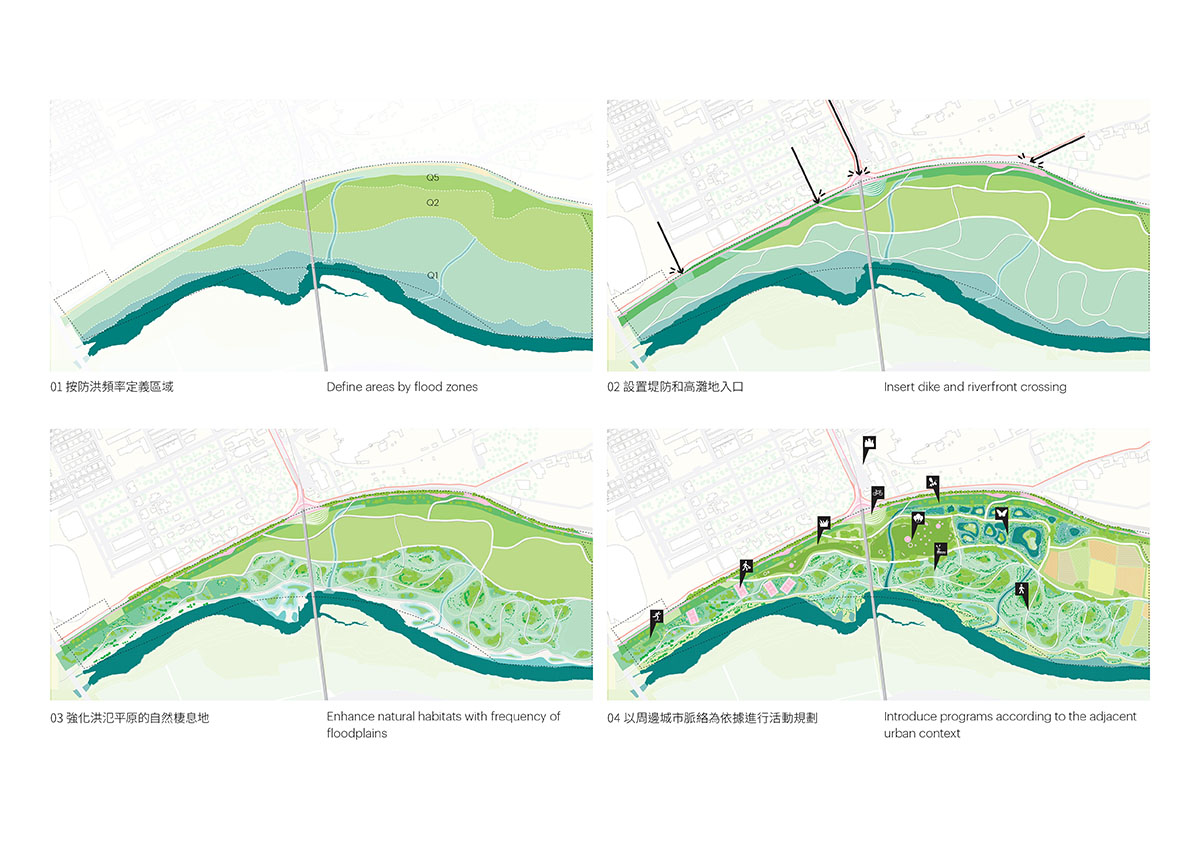 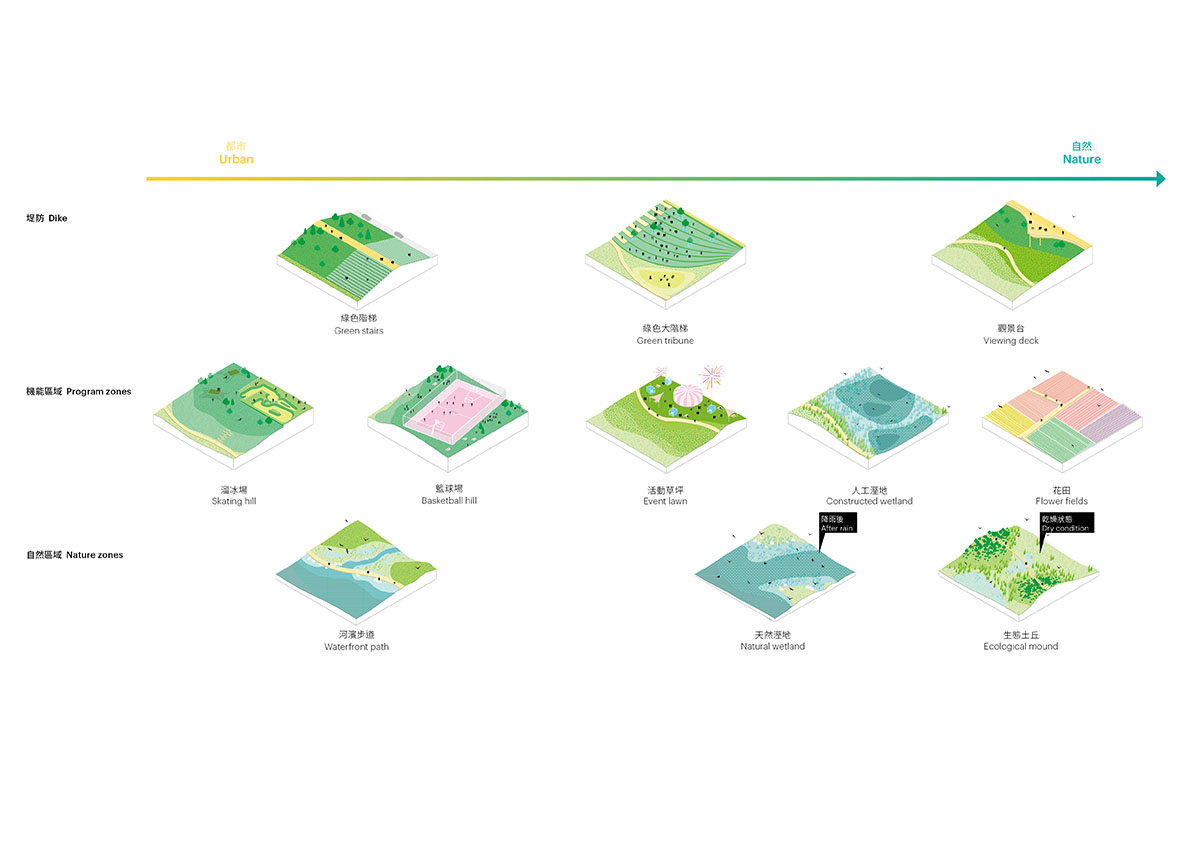 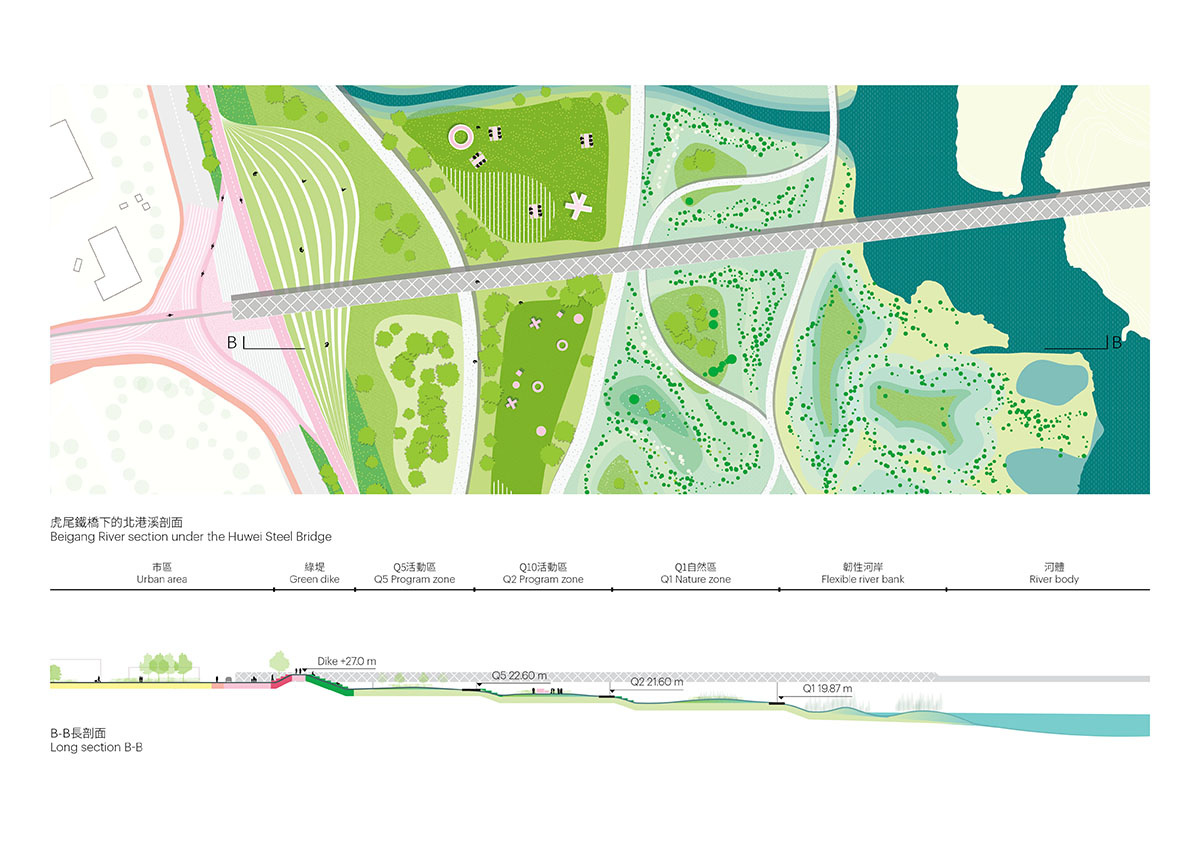 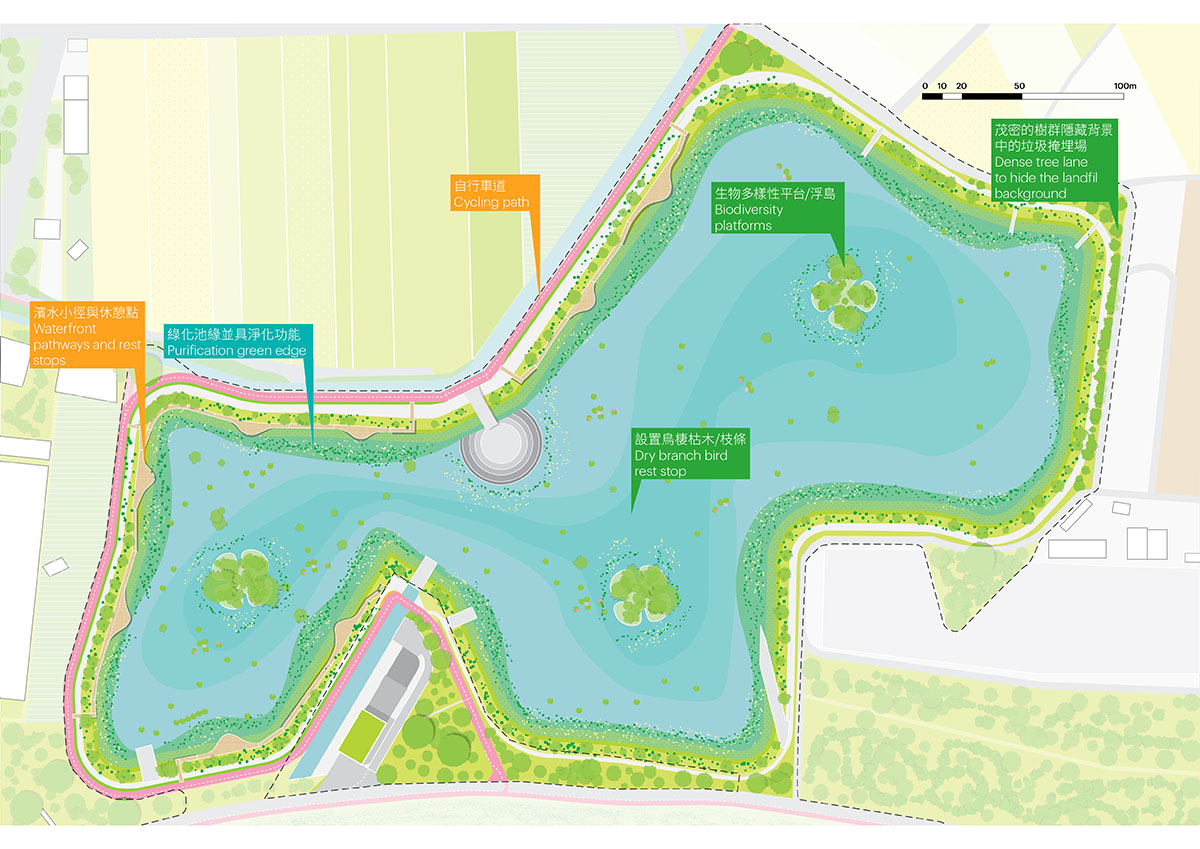 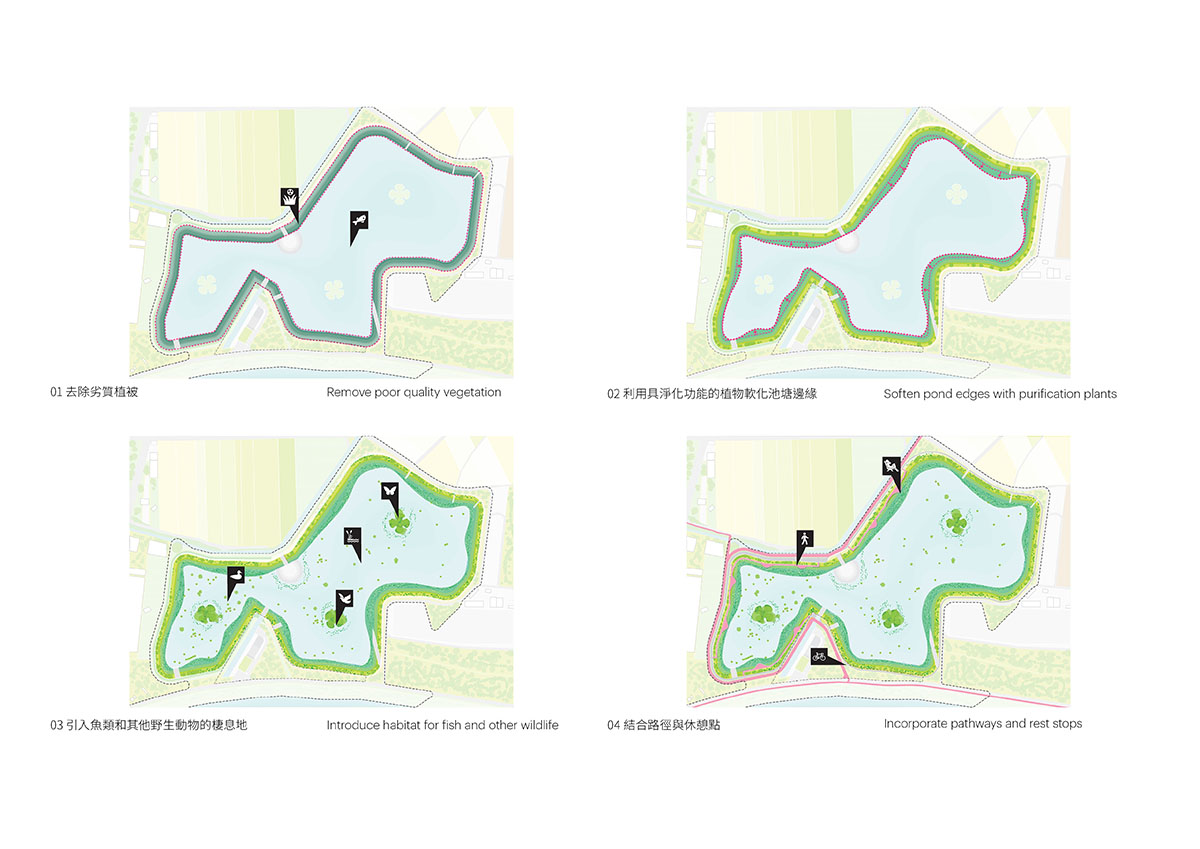 MVRDV was established in 1993 in Rotterdam, The Netherlands by Winy Maas, Jacob van Rijs and Nathalie de Vries. MVRDV engages globally in providing solutions to contemporary architectural and urban issues.

The firm, as part of a team named North Creek Collective, created a "Sea Level Rise Catalogue", introducing a series of proposals for the City of Vancouver.