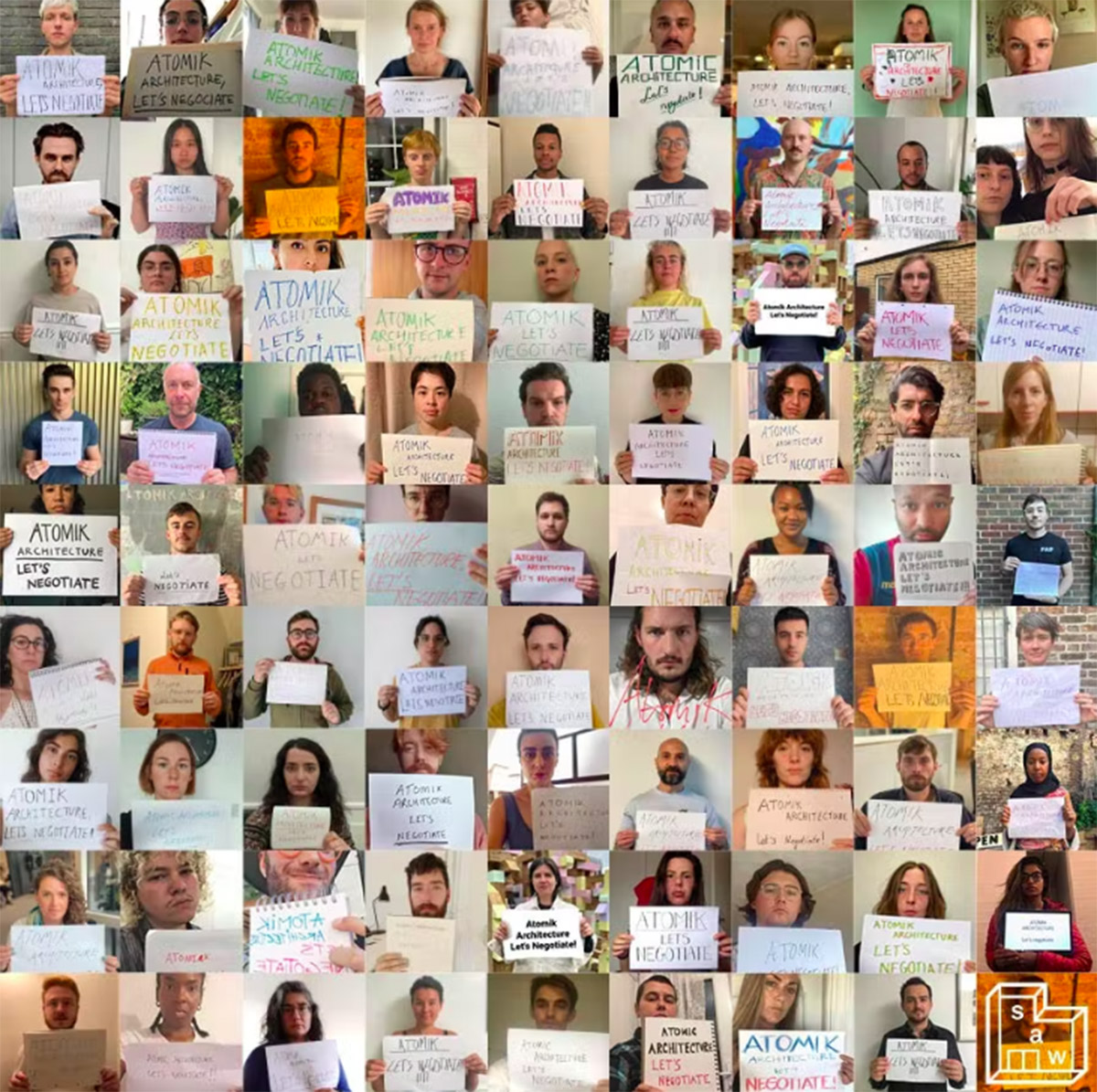 Workers at London-based architecture practice Atomik Architecture are preparing to initiate a ballot for strike action, following a dispute over pay and working conditions at the firm.

The staff at the firm have notified their employer last week, 13 September, that they are intending to ballot for strike action, making the group's intention the first ever strike in the private-sector in the United Kingdom, according to United Voices of the World – Section of Architectural Workers (UVW-SAW), a UK trade union fighting against the negative impacts of architectural work on workers, communities, and the environment.

After months of negotiations with management, employees claim they were dragged into a dispute that could lead to threats of layoffs after their demands.

According to UVW-SAW, this movement has began after two years of uncertainty and low wage growth with the pandemic, which has caused to accept the high costs of living.

Employees claim that while their employers are making profit, they cannot bear the burden of rising costs in the country.

The workers are demanding a 10 per cent pay increase in-line with inflation, or a 7 per cent increase with a profit-sharing model at the firm. Reduced working hours - from eight to seven hours, flexible working arrangements, paid training, and trade union recognition are among their demands.

"Following months of being ignored by management after raising issues regarding their pay and conditions, workers at Atomik, a London based architectural company, are initiating a strike ballot," stated in a press release by UVW-SAW.

"In June 2022, some workers individually raised the matter of pay in their annual reviews. When they were ignored, they wrote a collective letter outlining their demands."

"UVW-SAW has been informed that after receiving the letter, management did agree to meet workers but refused to negotiate. During the meeting itself, the directors appeared to fail to understand the serious impact rising living costs were having on workers, and flat out refused to share financial information for the company, both of which left the workers frustrated and distrustful."

"The workers were left with no choice but to notify their employer that they are in dispute over pay and conditions. They hoped that this would show Atomik that they are serious about these concerns, and meaningful negotiation could commence," reads the statement of UVW-SAW.

"But Atomik’s response was to trigger a redundancy consultation, which will most likely lead to dismissals. This came as a shock to the workers, who until recently were under the impression the company was looking to expand the number of employees," the statement continues.

"Most workers are not getting the pay rises they need"

"What we are hearing from our membership is that most workers are not getting the pay rises they need. In a sector which has had stagnant wages for at least 20 years the cost of living crisis is exacerbated – particularly for those at the lower end of the pay scale," said Jake Arnfield, UVW-SAW representative.

"[This] could trigger a wave of strikes in architecture"

"Numerous groups of architectural workers are looking very seriously at industrial action as one way to resolve this. If even a single strike happens, it could trigger a wave of strikes in architecture this autumn and winter."

"If you work in architecture, we encourage you to get behind Atomik workers. Their success is part of the movement to raise wages and eliminate rampant exploitation in the sector," Arnfield added.

"We are disappointed that Atomik has continuously dismissed and ignored our individual and collective concerns," said Atomik workers in a joint statement.

"We were expecting to collaborate to improve conditions at the practice but instead, we have had months of empty promises and zero progress."

"We have all worked at Atomik for a number of years, but that loyalty has not been reciprocated in meaningful improved pay or working conditions. We have been forced into this position, striking is our last resort," Atomik workers added.

"We believe our members at Atomik are the first ever group of private sector architects to ballot to strike, so if this strike goes ahead it will be an industry first, and one that all architects and members of the movement should get behind," said Petros Elia, general secretary of UVW.

"UVW has shown yet again that there is no group of workers who are unorganisable, and whether you are an architect or a cleaner, you have the power and every reason to unite, fight and strike."

"I call on Atomik’s bosses to negotiate with us and avoid what could become incredibly operationally and reputationally damaging strike action which will receive the full support of our union. The choice is yours," said Elia.

These are not the first concerns and demands regarding low wages and working conditions in the architecture field. In December 2021, a group of architects at New York firm SHoP ignited unionization efforts to form a union. On February 3, they announced that they had withdrawn their election petition, stating that they had been exposed to a “powerful anti-union campaign” according to their statement.

Recently, New York firm Bernheimer Architecture became the first and only architecture studio to unionize in the private sector in the United States after the employees' two-year AWU (Architectural Workers United) campaign.