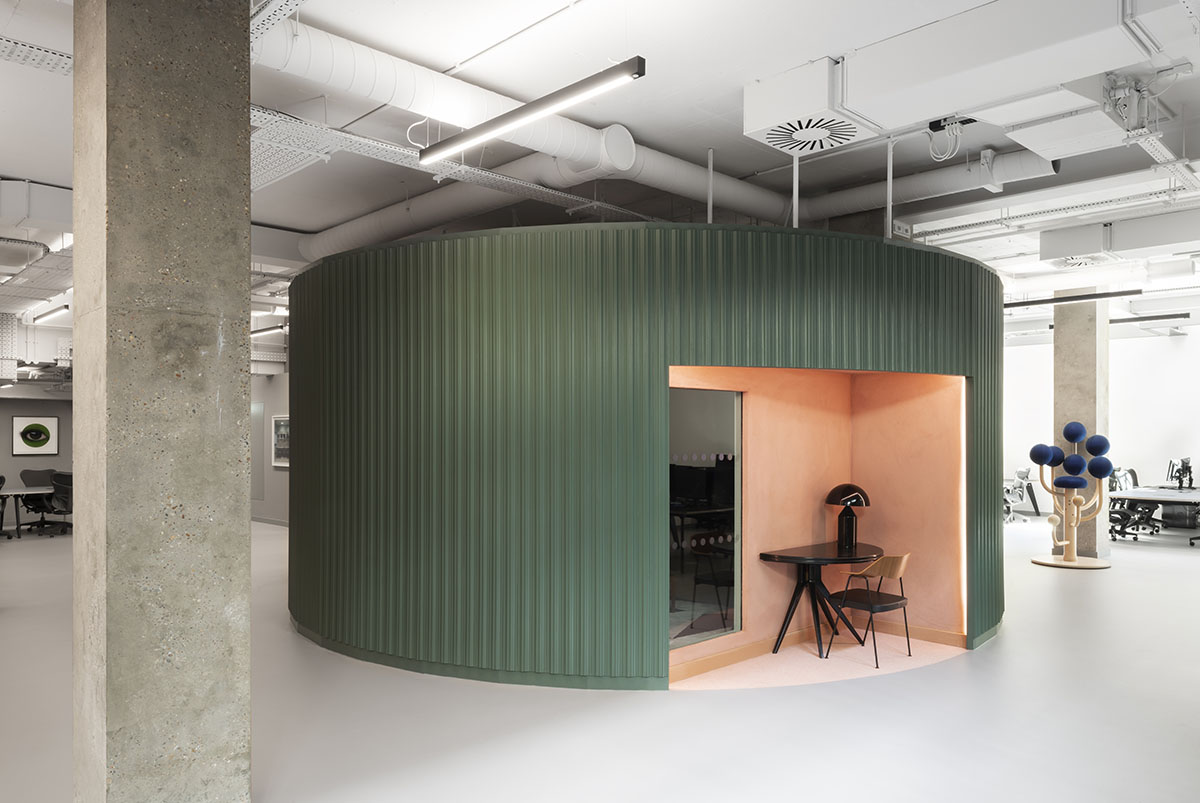 The project, named Black Kite, is the conversion of an old Engineers and Iron Foundry into a creative studio for Black Kite, an independent visual effects and design studio in East London. 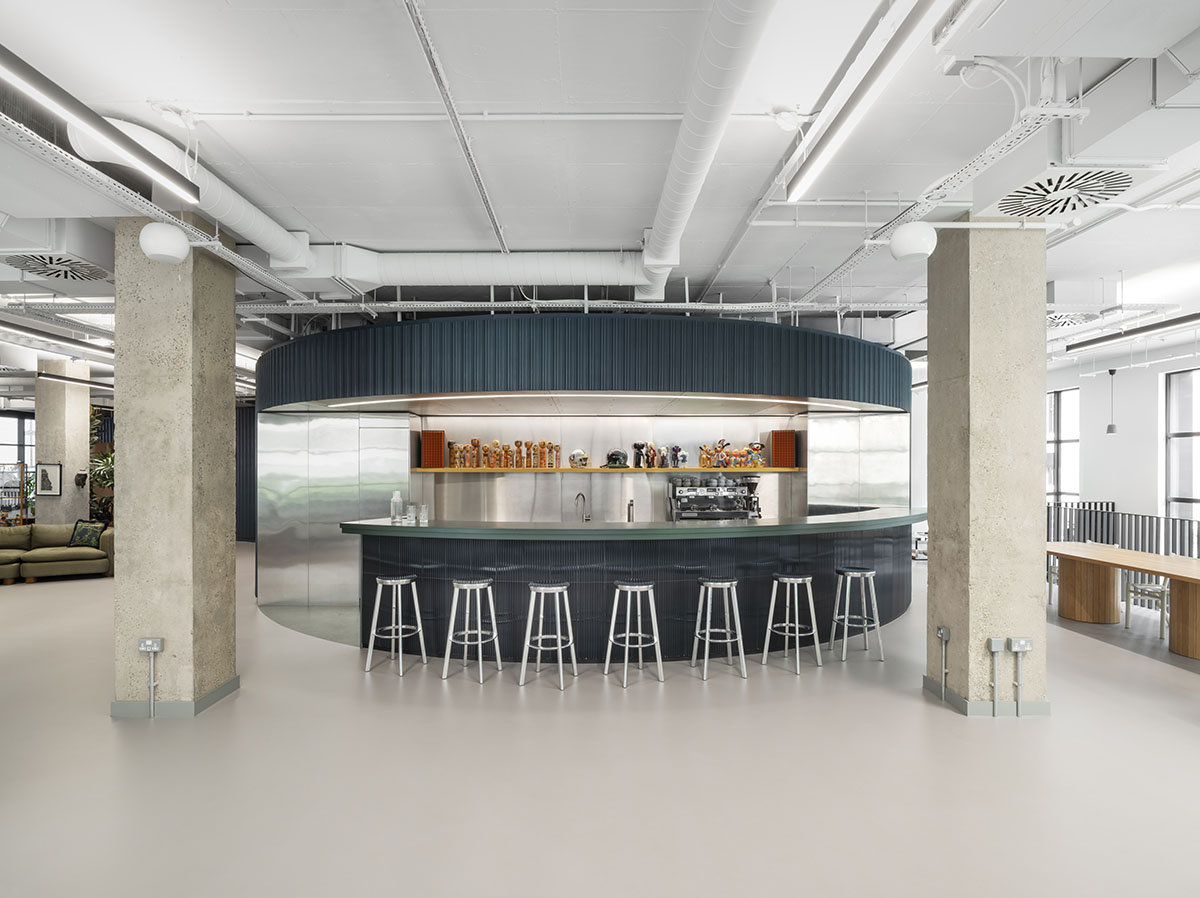 Taking cues from the historical past of the building, the studio reconfigures the interiors with a sequence of spaces with varying degrees of privacy informed by the heritage of the site’s industrial past.

Inside a series colorful carved-out cylinders are reinterpreted from the "geometrical forms of traditional iron kilns" used in the building and the locations of cylinders are mapped across the grid system defined by the existing columns. 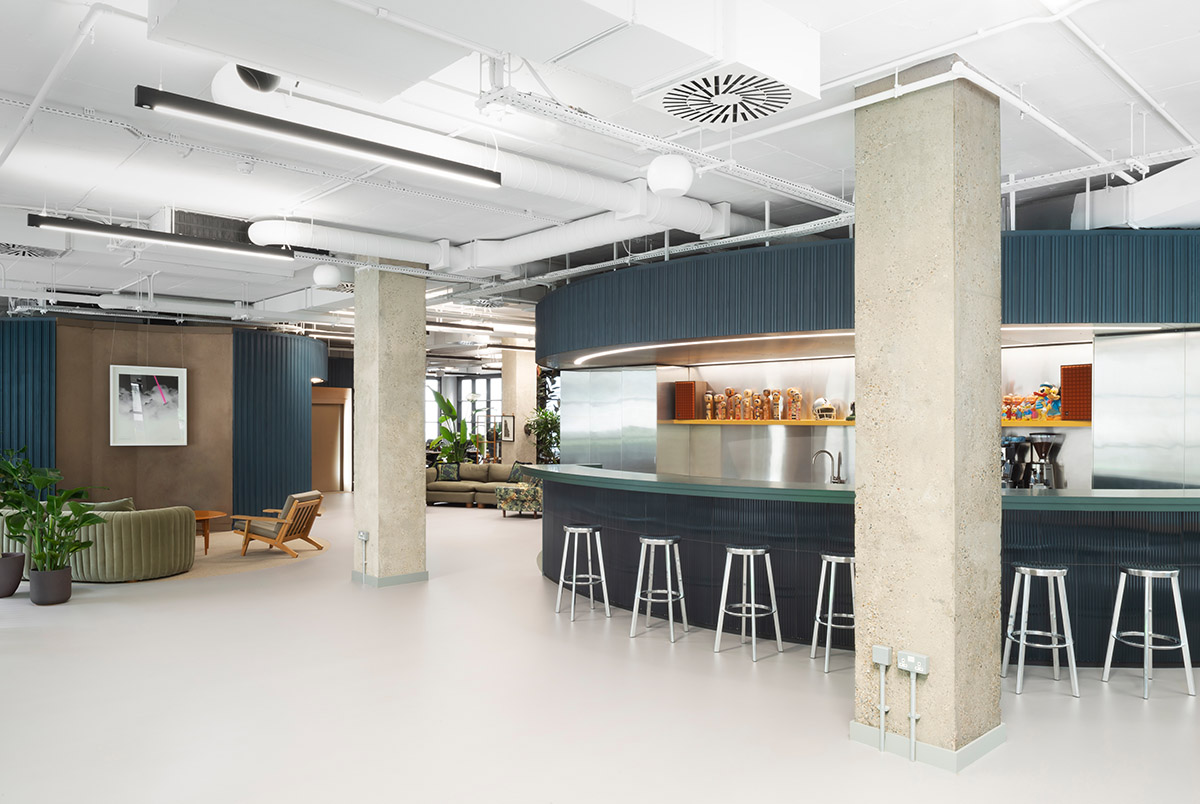 "The client’s brief called for a specific working environment; production and visual effects suites that are isolated from external sources of light and sound," said Bureau de Change Architects, led by Katerina Dionysopoulou and Billy Mavropoulos.

Based on the project brief, the studio devised a spatial configuration by taking into account these conditions and developed a strategy derived from the site’s industrial past. 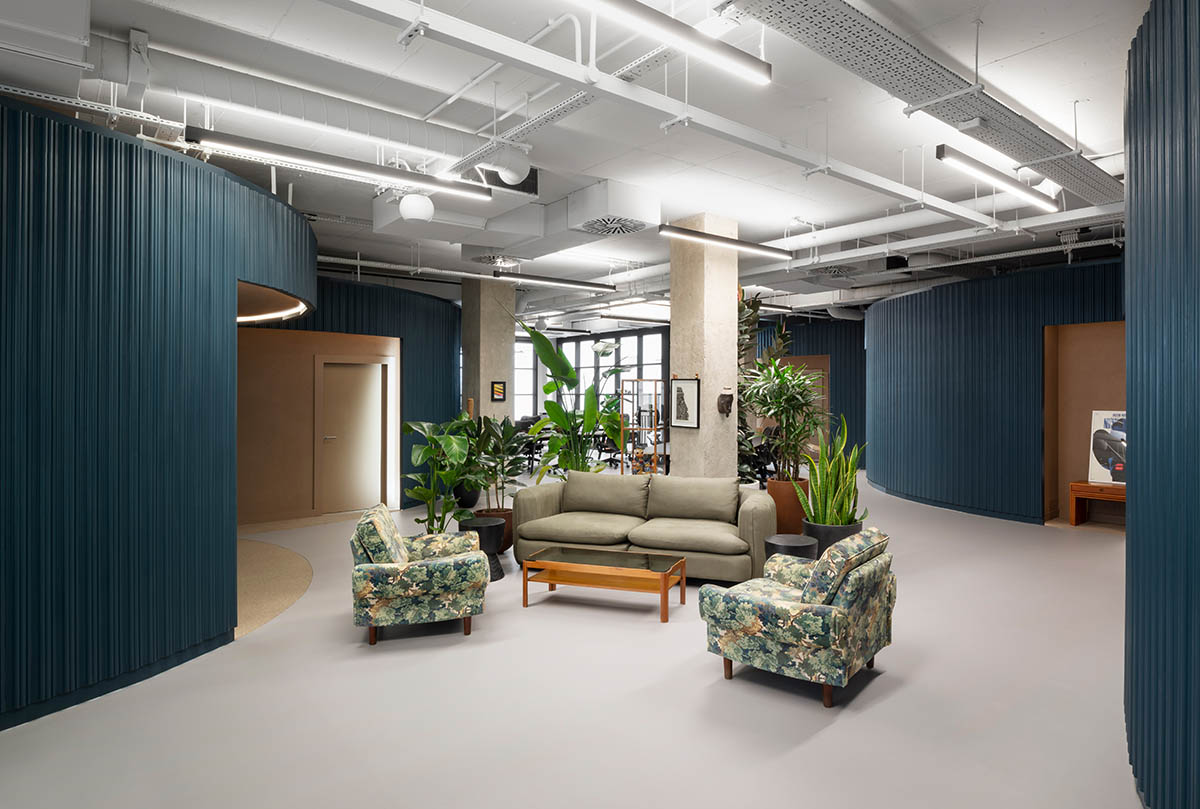 Each volume contains a rectangular void, enclosing the production, editing, and colour suites in a controlled private environment, while smaller cylinders intersect the private working space to create transitioning thresholds.

The empty spaces between the cylinders are defined as waiting & relaxing and meeting areas and are animated with colorful furniture. 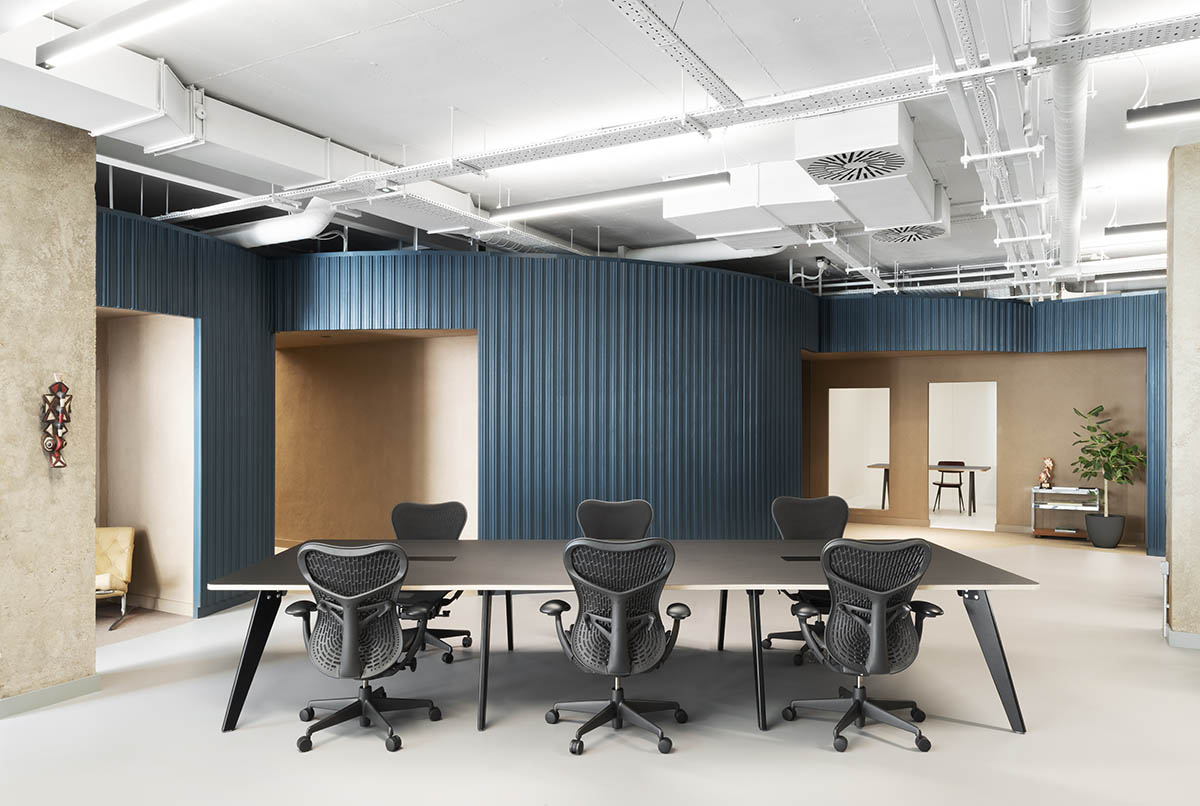 "We are proposing a scheme that extracts and interpolates volumes and motifs of traditional Victorian foundries and kilns to create a gradient of introvert to extrovert spaces, seamlessly integrated together through a bespoke layout and design language," said Katerina Dionysopoulou, co-founder and director of Bureau de Change.

The undulating external surface forged from the intersections was excavated at intervals, creating carved-out spaces within the volumes. 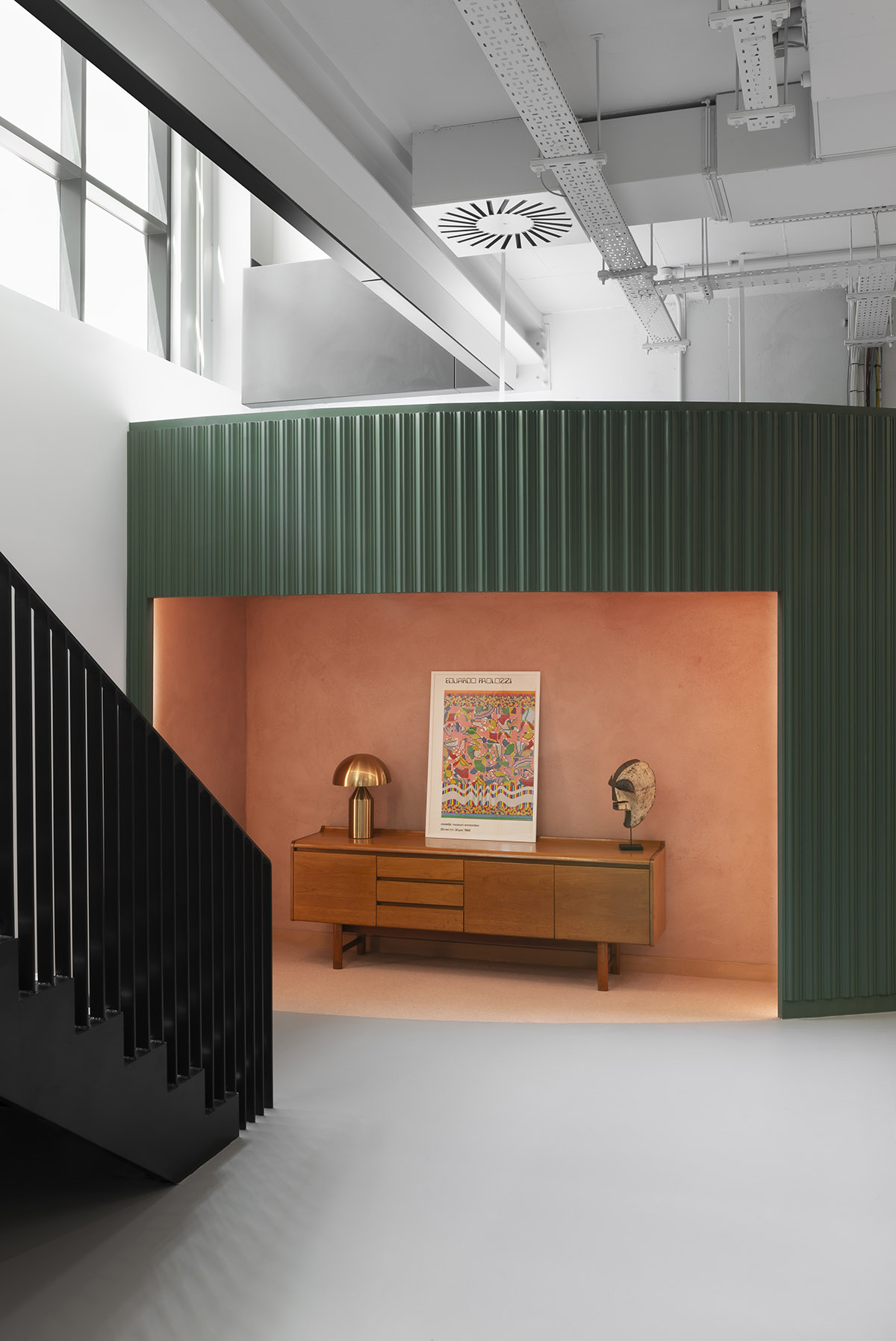 These cavities are defined as semi-private break out spaces, each correlating to their respective enclosed working suite. The reason of this configuration is to "create duality of space within a singular volume, separated by a lone wall," according to the studio.

As the studio explains, "this placement of each excavation allows for a natural transition between the enclosed working areas, semi-private breakout cavities, and the central open plan working space." 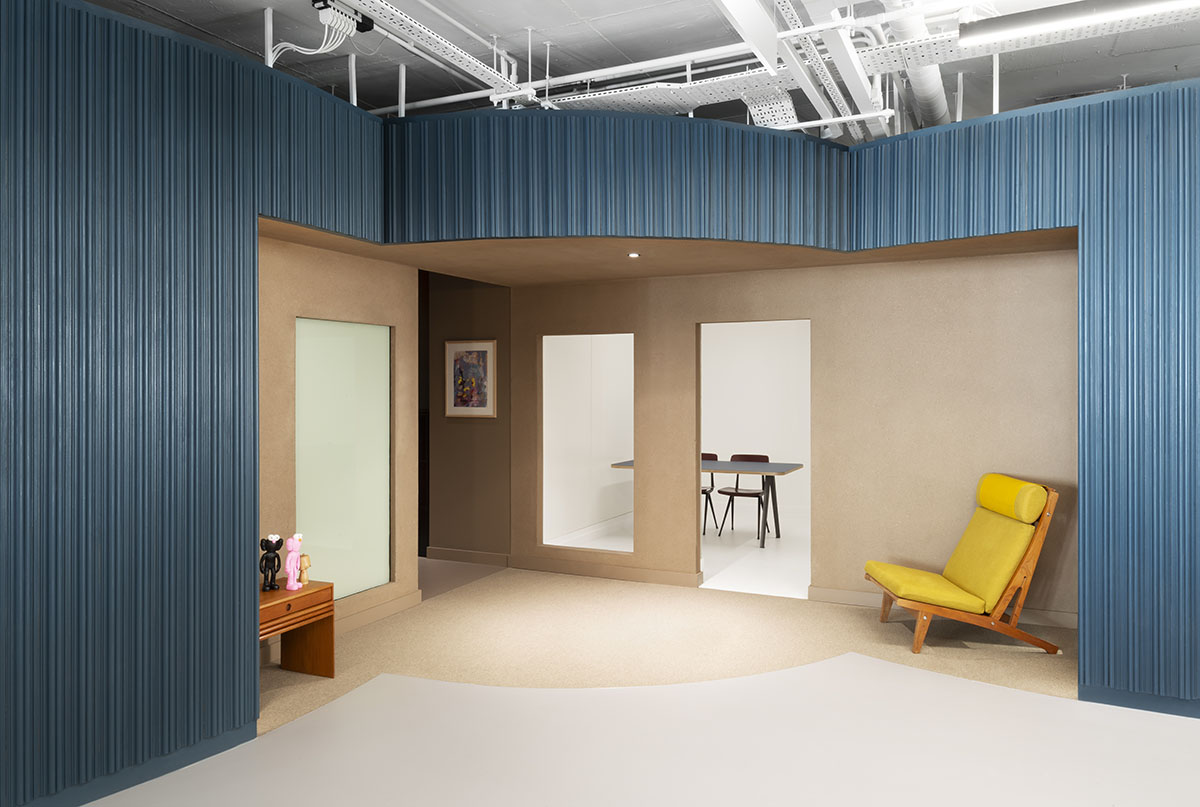 "Each of the volumes are clad in painted routed timber surfaces, informed by the vertical seams of traditional iron kilns," said Billy Mavropoulos, co-founder and director of Bureau de Change.

"The cut-outs are finished in a rough clay plaster, juxtaposing the sharper articulation of the cylinders with warm cave like textures further adding to the journey of materials, textures and colours in the space," Mavropoulos added. 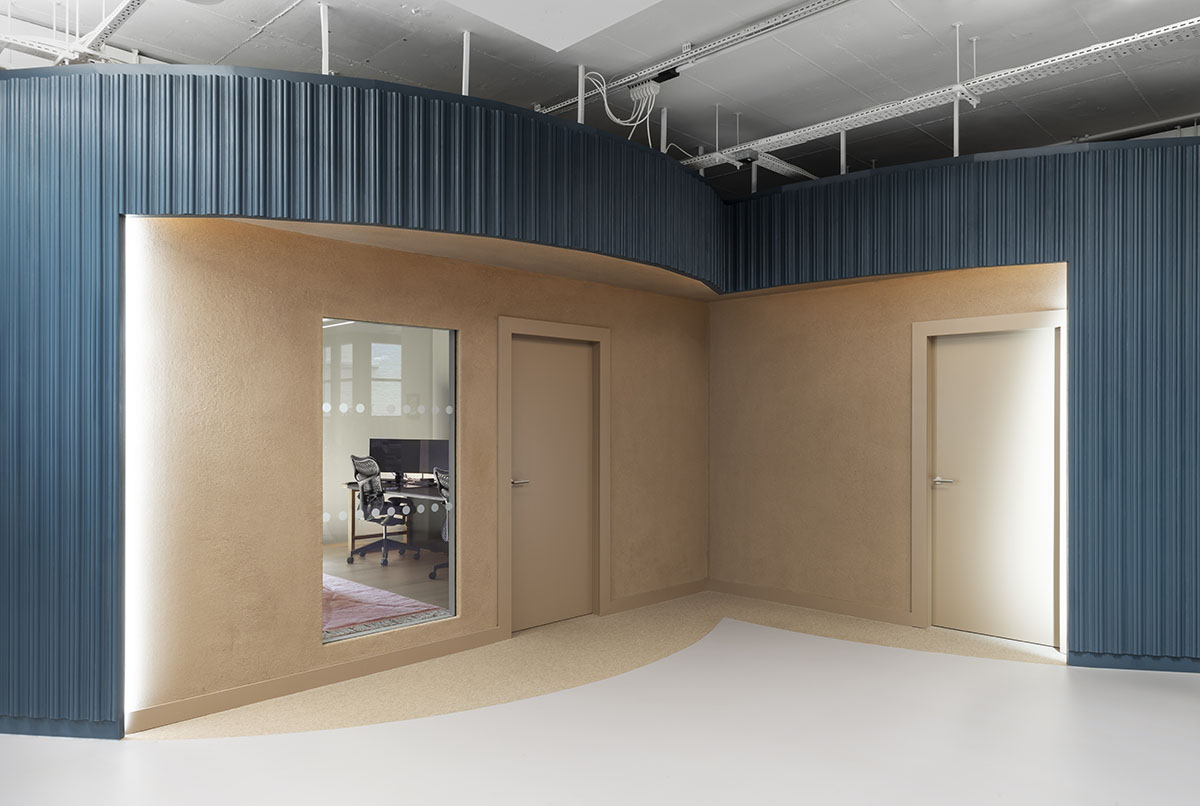 At the ground floor, there is an open plan lounge that connects the reception in the front with the open plan production desks in the back.

The kitchen, clad in stainless steel, is placed in one of the cavities, this material is preferred for reflecting light and acting as a distinct centrepiece of the room by the entrance becoming the social core of the office. 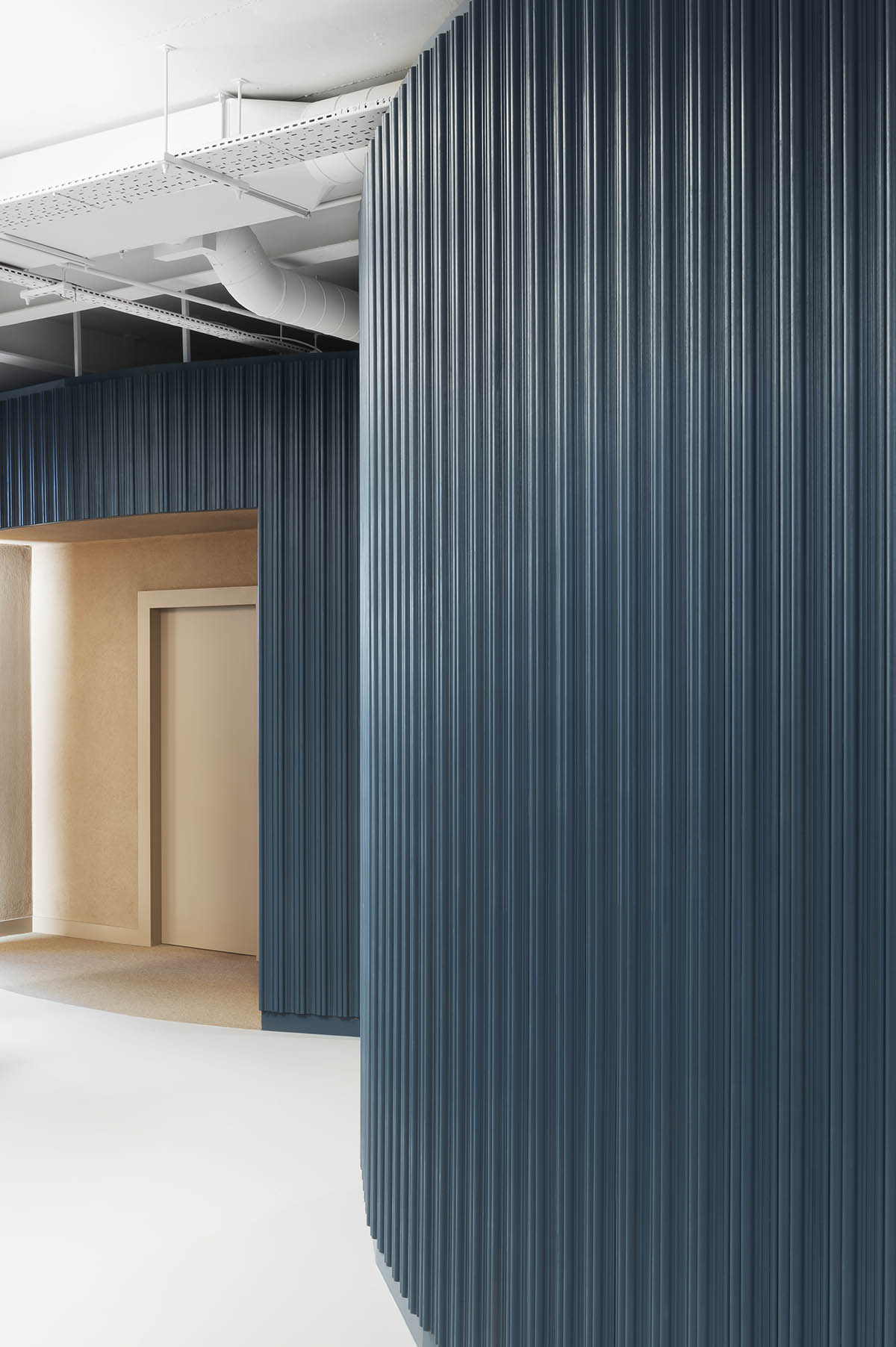 The colorful furniture pieces pop out between concrete columns in the interior. The studio carefully curated furniture pieces to activate the space and give "a homely and comfortable atmosphere".

Users feel the tension between home and workplace. The furniture pieces are placed among the cavities and the negative spaces formed between the volumes. 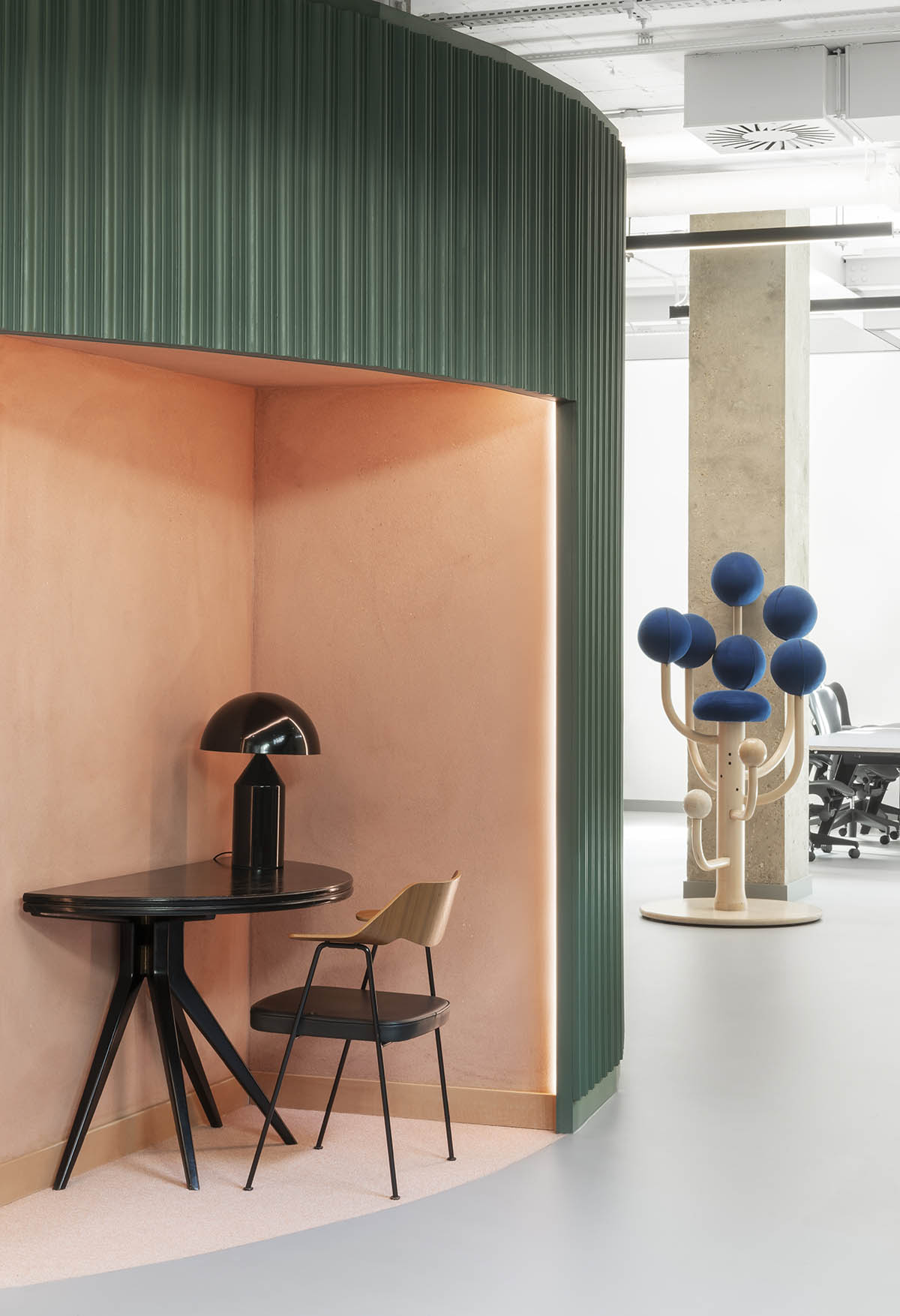 "The proposed layout offers access to a gradating degree of porosity and permeability in work-space environments, incorporating and catering to preferential cultures, values, and behaviours of people," the studio added.

According to the architects, the spaces are not divided into different sectors but are connected seamlessly into one plan, offering a sense of discovery through different layers. 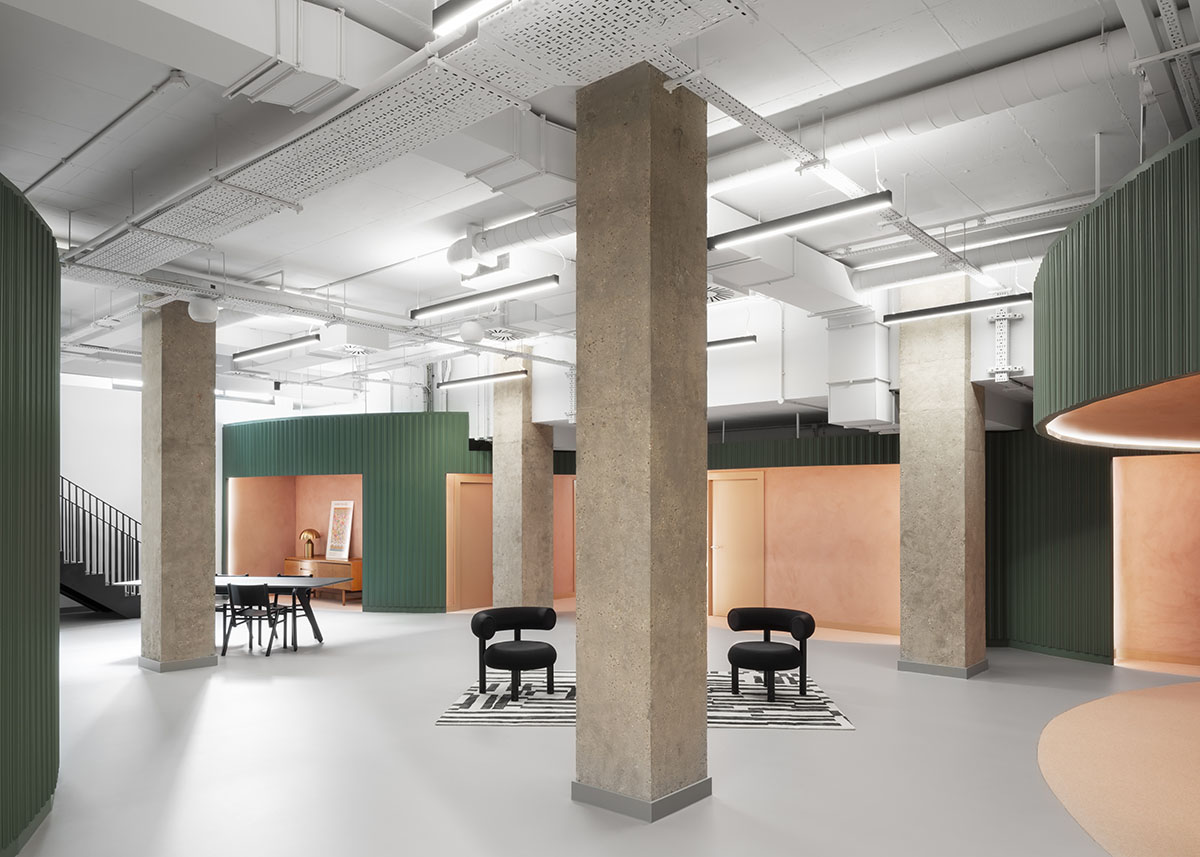 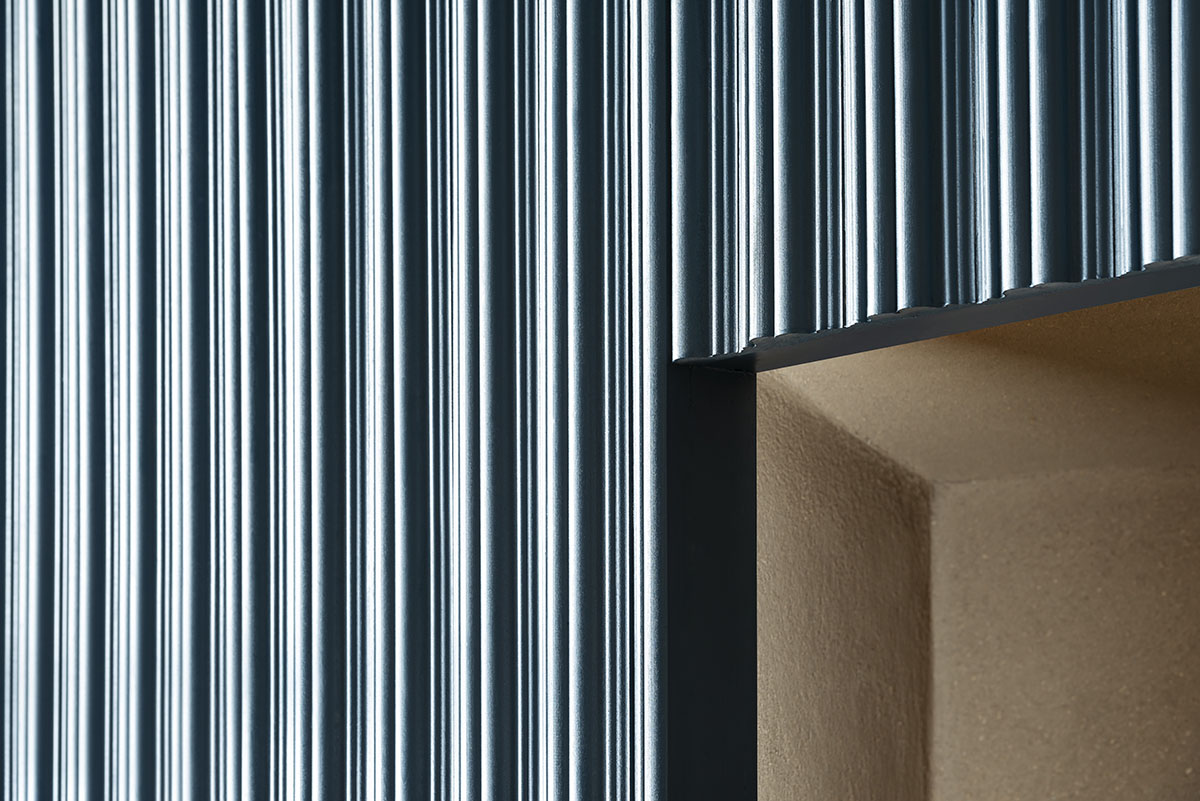 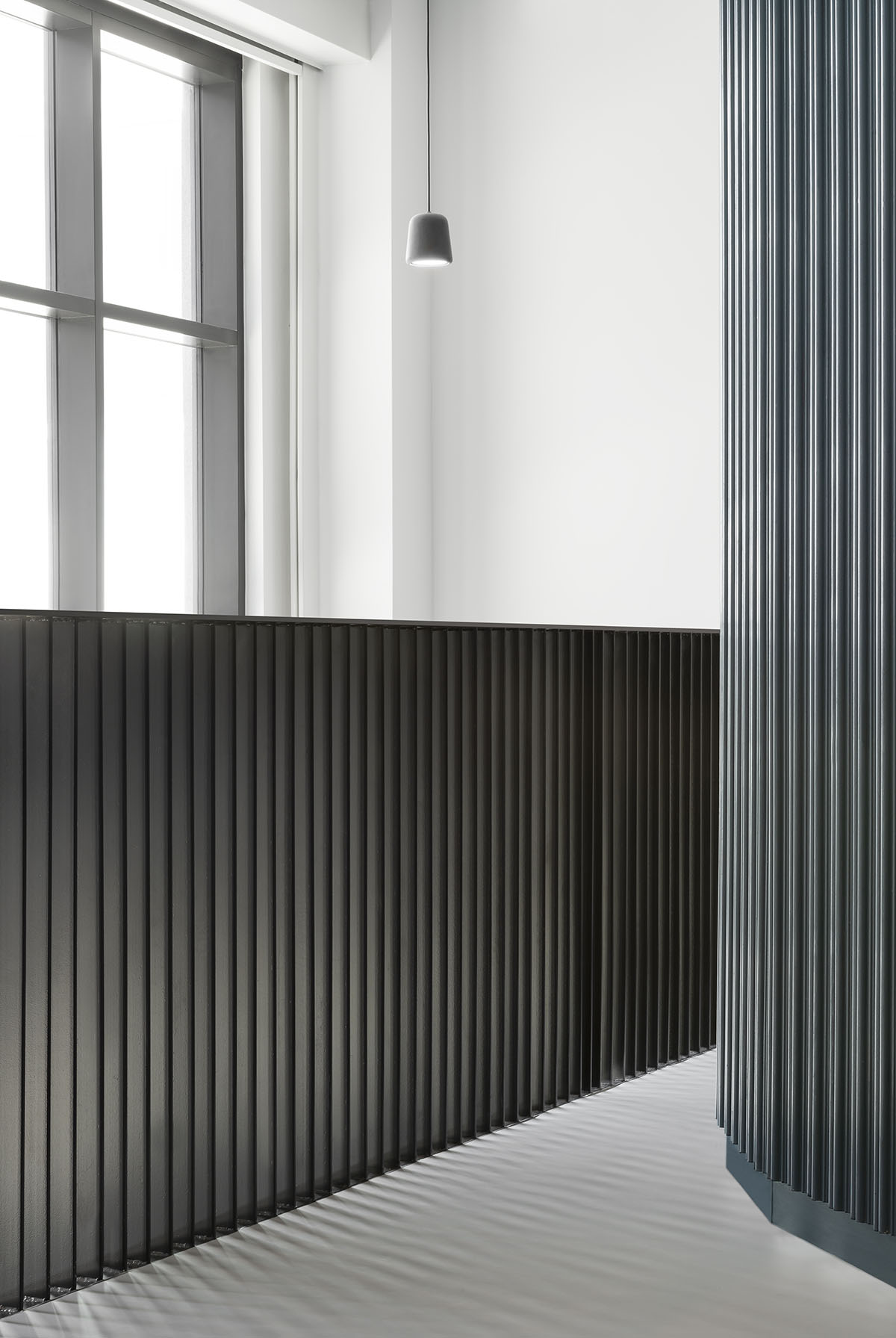 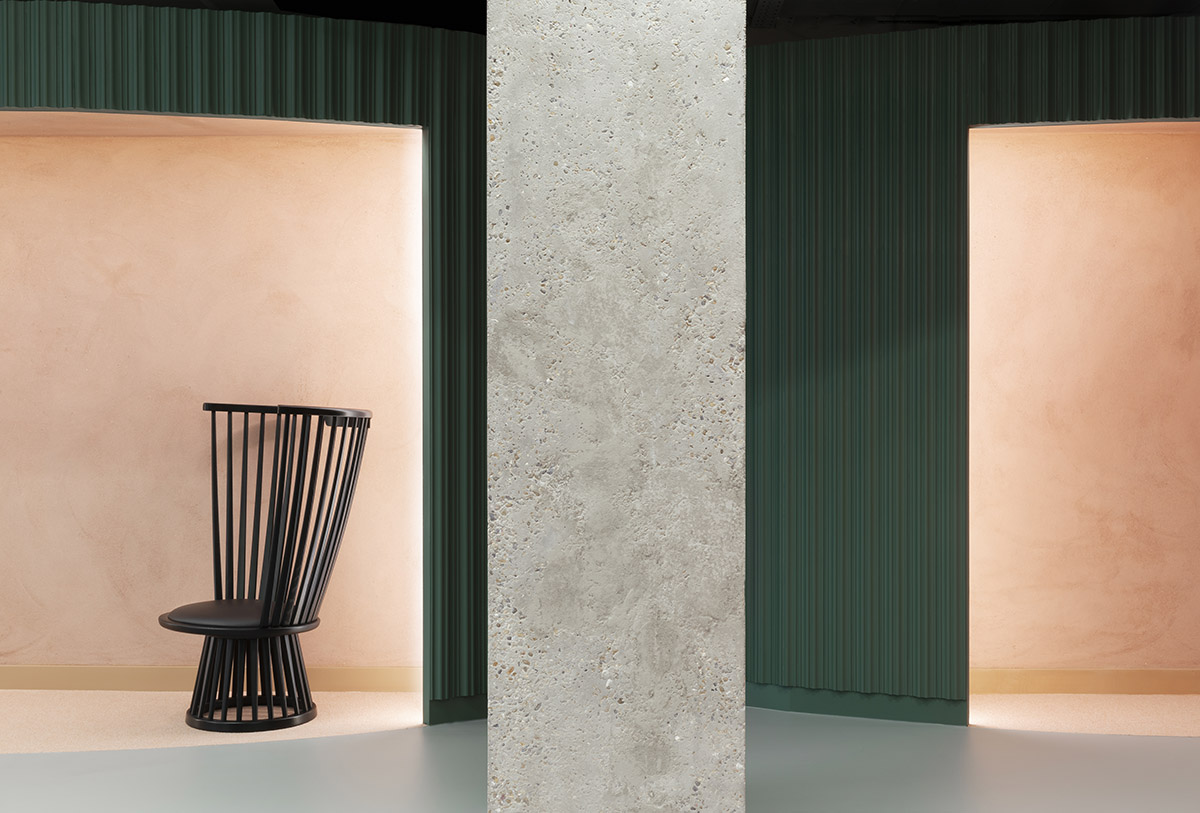 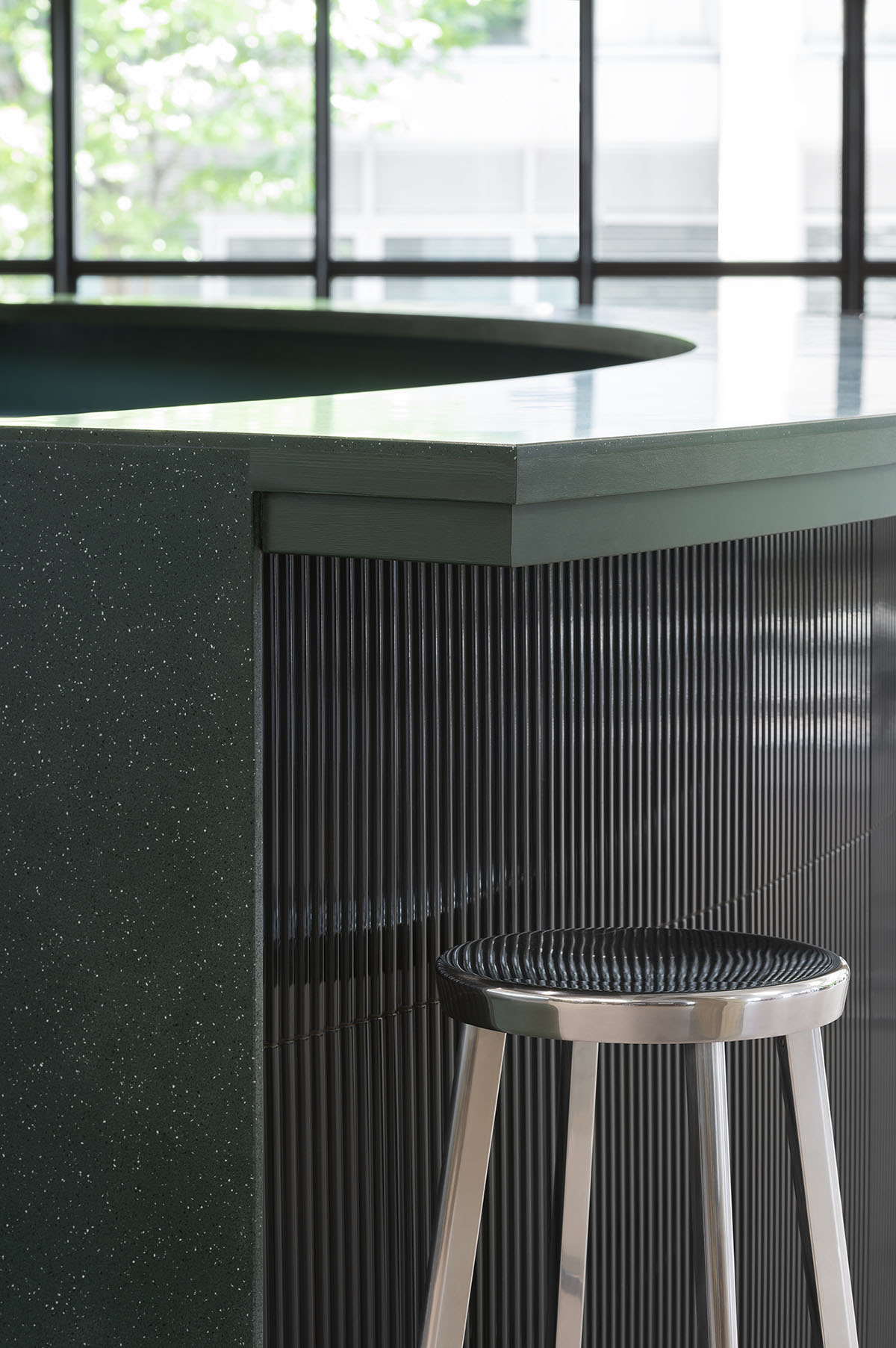 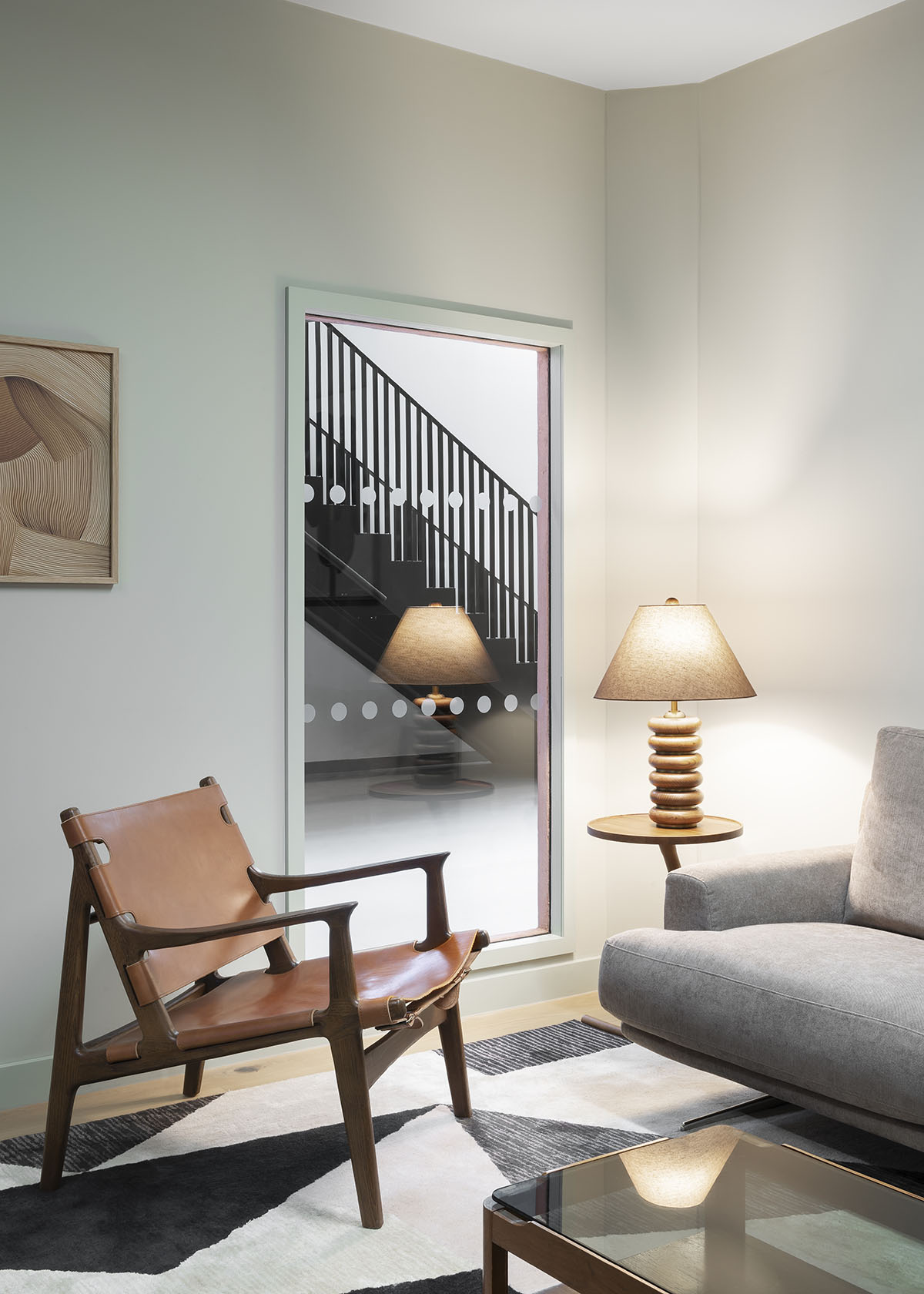 The studio produces projects in various sizes and scales aiming to "bring a sense of theatre, playfulness and innovation to the design of spaces, products and environments."