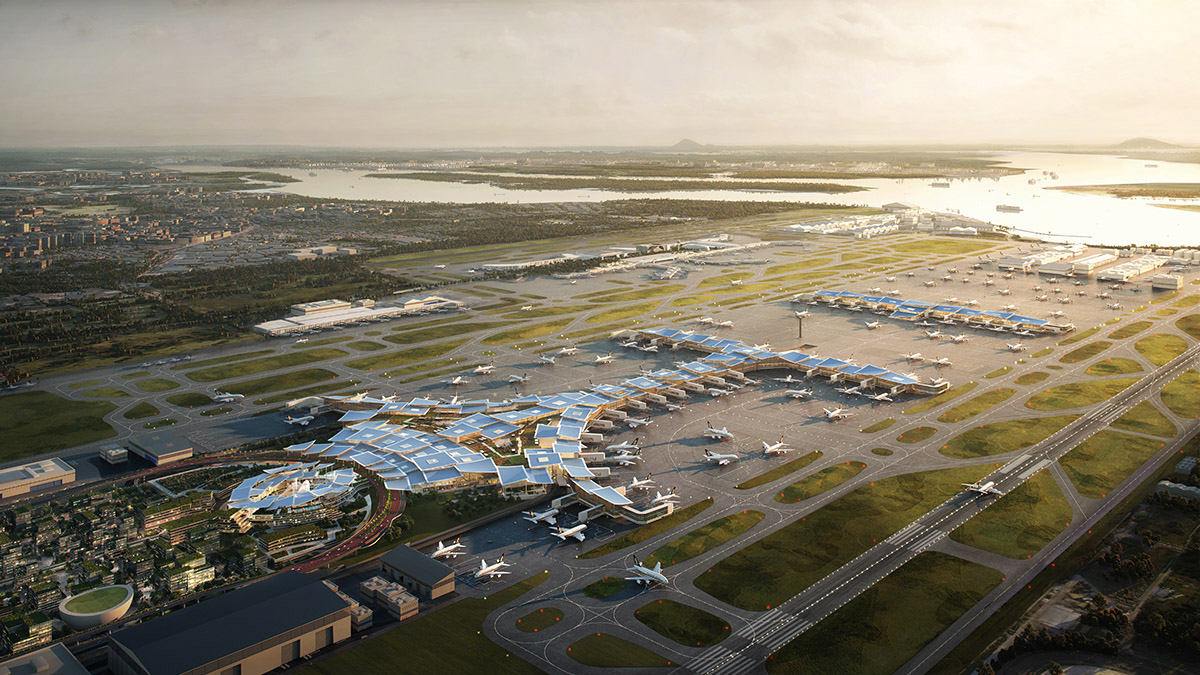 Kohn Pedersen Fox (KPF) and Heatherwick Studio have unveiled design for Changi Airport's Terminal 5 in Singapore, aiming to increase the airport's capacity up to 50 million passengers per year.

Envisioned as "a social extension of the city itself," the design of the new terminal is based on an "airport as a city" concept and will include a series of "human-scale social spaces".

Terminal 5 building is set to be located within the 1,080-hectare Changi East development that is almost as big as the land area of today’s Changi Airport.

"Our intention is to redefine what an airport terminal can be"

With the new design, the new airport expect to reach 50 million passengers per year. Offering a high-level of flexibility, Terminal 5 is set to be built in two phases, in line with traffic growth.

"Our intention is to redefine what an airport terminal can be. Most airports aren’t great places to spend time but Changi has always been different," said Thomas Heatherwick, founder of Heatherwick Studio.

"Rather than making a single vast monolith on the outskirts of a city for the exclusive use of travellers, our plan is to create a social space that people living in the city are excited to visit," Heatherwick continued.

"We want to break away from the typical airport experience that you find remorselessly copied around the world and instead offer a human and homely collection of spaces filled with activity and daylight for travellers and Singaporeans alike," the designer added.

Terminal 5 is also conceived as a resilient and sustainable airport, and to reduce the carbon footprint, the design team adds solar panels, smart building management systems, as well as district cooling combined with thermal energy storage.

"T5 will be a Green Mark Platinum Super Low Energy Building as certified by the Building and Construction Authority," said Changi Airport's website.

The new terminal is envisioned as "a series of neighbourhoods and an intuitive extension of Singapore itself."

Instead of creating a single monotonous roof, the terminal will be enriched with a series of human-scale social spaces.

"They range from the small and intimate to large and expansive clearings. Each area is a destination with its own distinct character offering different qualities of light, atmosphere and experience, making even the most functional parts of the airport extraordinary," explained Heatherwick Studio.

Changi East Site Plan. T5 is located within the 1,080-hectare Changi East development site and will be built in phases to handle about 50 million passenger movements per year when completed

"A memorable and positive experience for travelers and the greater public"

"Our design for Terminal 5 is inspired by Singapore’s unique blend of nature and city,” said Trent Tesch, KPF Design Principal.

"We are conscious of the international significance of this project, and are focused on creating not only an iconic building that is identifiably Changi Airport, but also a memorable and positive experience for travelers and the greater public," Tesch added.

"When completed in the mid-2030s, T5 will show the world the kind of place Singapore is…[and] will be a place that all Singaporeans can take pride in and enjoy," said Prime Minister Lee Hsien Loong.

"Our decisions to press on with Changi T5…sends a strong and clear signal to the world that Singapore is emerging stronger from the pandemic, and charging full steam ahead," Lee Hsien Loong added.

Construction is expected to begin in two years, and Terminal 5 is planned to start its operations around the mid-2030s.

KPF and Heatherwick Studio were selected to design the new terminal in 2018.

Once complete, Changi T5 will be Heatherwick Studio’s third project in Singapore. Previously, the studio completed the Nanyang University Learning Hub and EDEN project, an apartment building in the historic Newton District of Singapore.

Working as design partners, KPF and Heatherwick Studio are part of a Master Builder Consultants (MBC) led by KPF and Singapore-based Architects 61. SAA and RSP Architects Planners & Engineers serve as sub-consultants in the project.

Arup Singapore Private Limited, Mott McDonald, and Surbana Jurong will be providing engineering services as part of the MBC.

Top image: Aerial view of T5. T5 will be a resilient and sustainable terminal that leverages technology to enhance passenger experience and increase productivity.