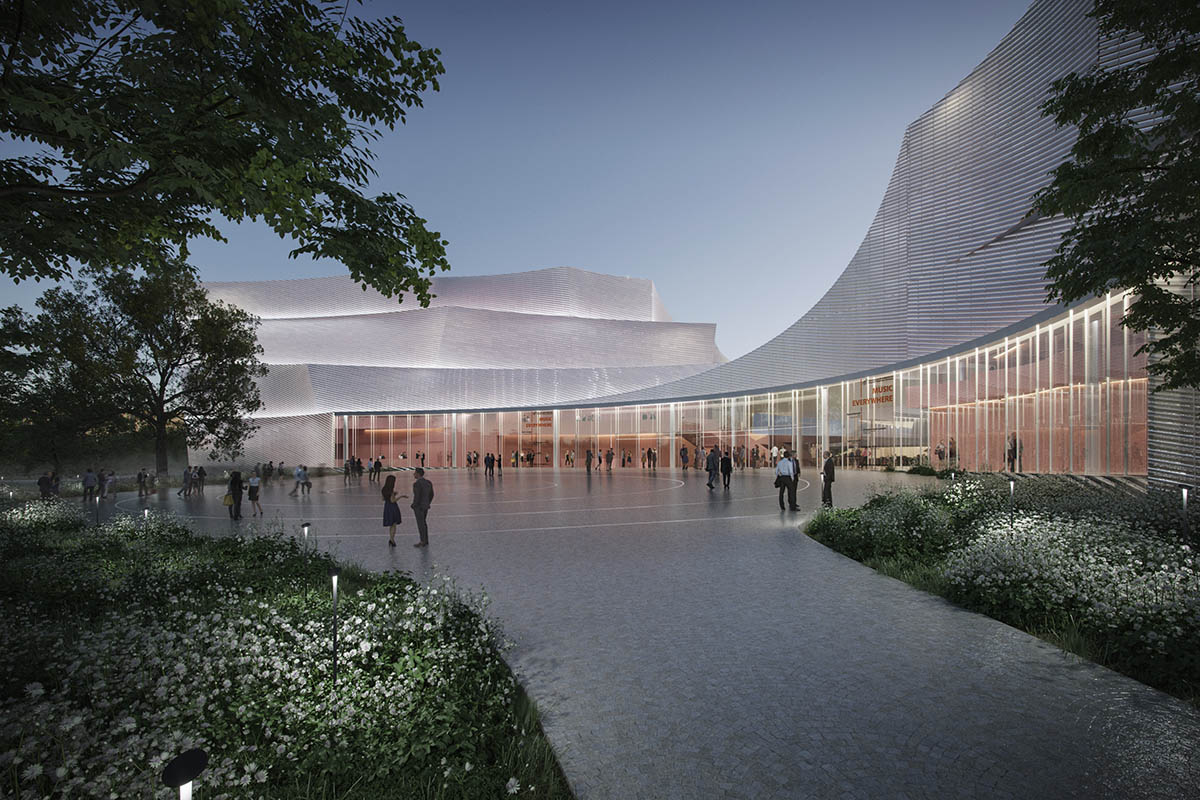 The new building, which will be built on a site on the Ušće Park of Belgrade, is designed as a structure that flows into each other and contains four main programs with different characters: a 1,600-seat performance hall, recital hall, creative hub and podium stage.

The Ušće Park is located on the banks of the River Danube and the new concert hall, next to the historic Palace of Serbia in New Belgrade, is intended to send a powerful message about transforming and rewilding our cities to make them greener, more beautiful spaces.

The new concert hall is the biggest cultural investment in the region for decades and the project is an extraordinary commitment to building a brighter, more sustainable future for the city. 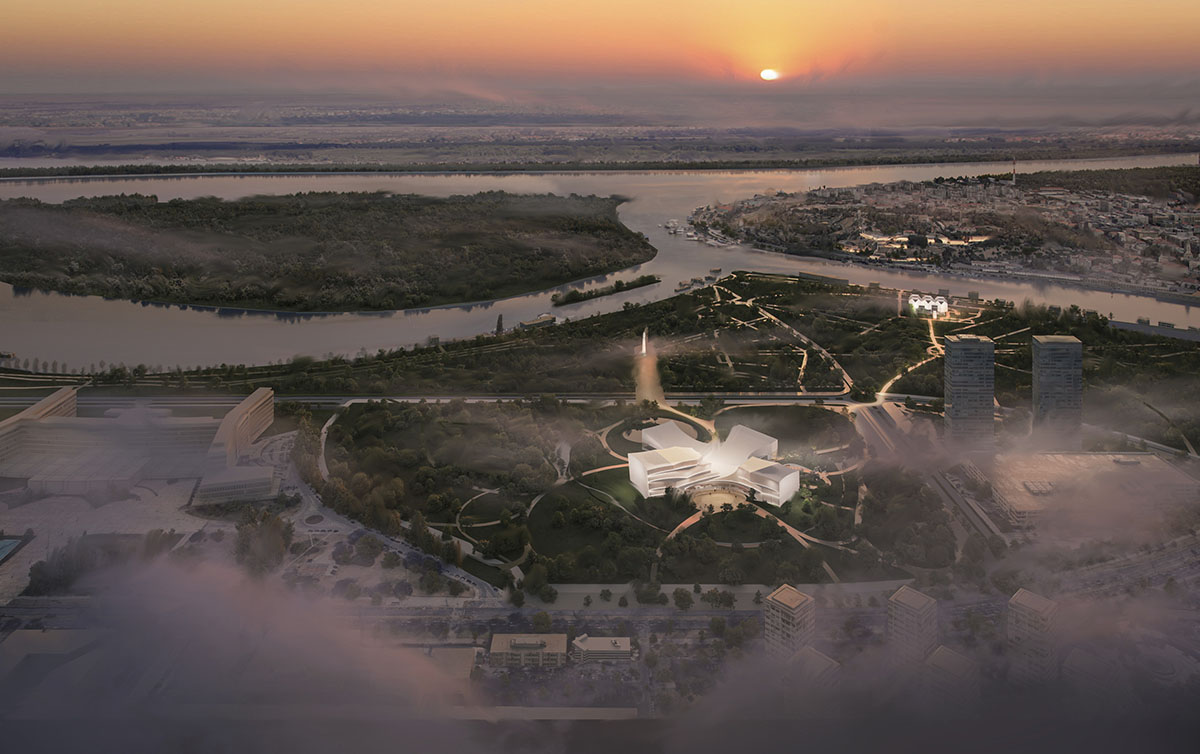 With its magnificent capacity for its Concert Hall, the design will be the first of its kind in the Balkans - it is aimed to be an internationally recognised platform for world class musical performance contributing to the social, economic and environmental development of Serbia.

In 2021 the United Nations Development Program (UNDP) launched an international design competition on behalf of the Government of Serbia in partnership with the Office of the Prime Minister, Ministry of Culture and Information, City of Belgrade and the Belgrade Philharmonic Orchestra, targeting the world’s most renowned architecture firms.

The competition received 37 applications from 15 countries, with eight candidates invited to proceed to the next stage. 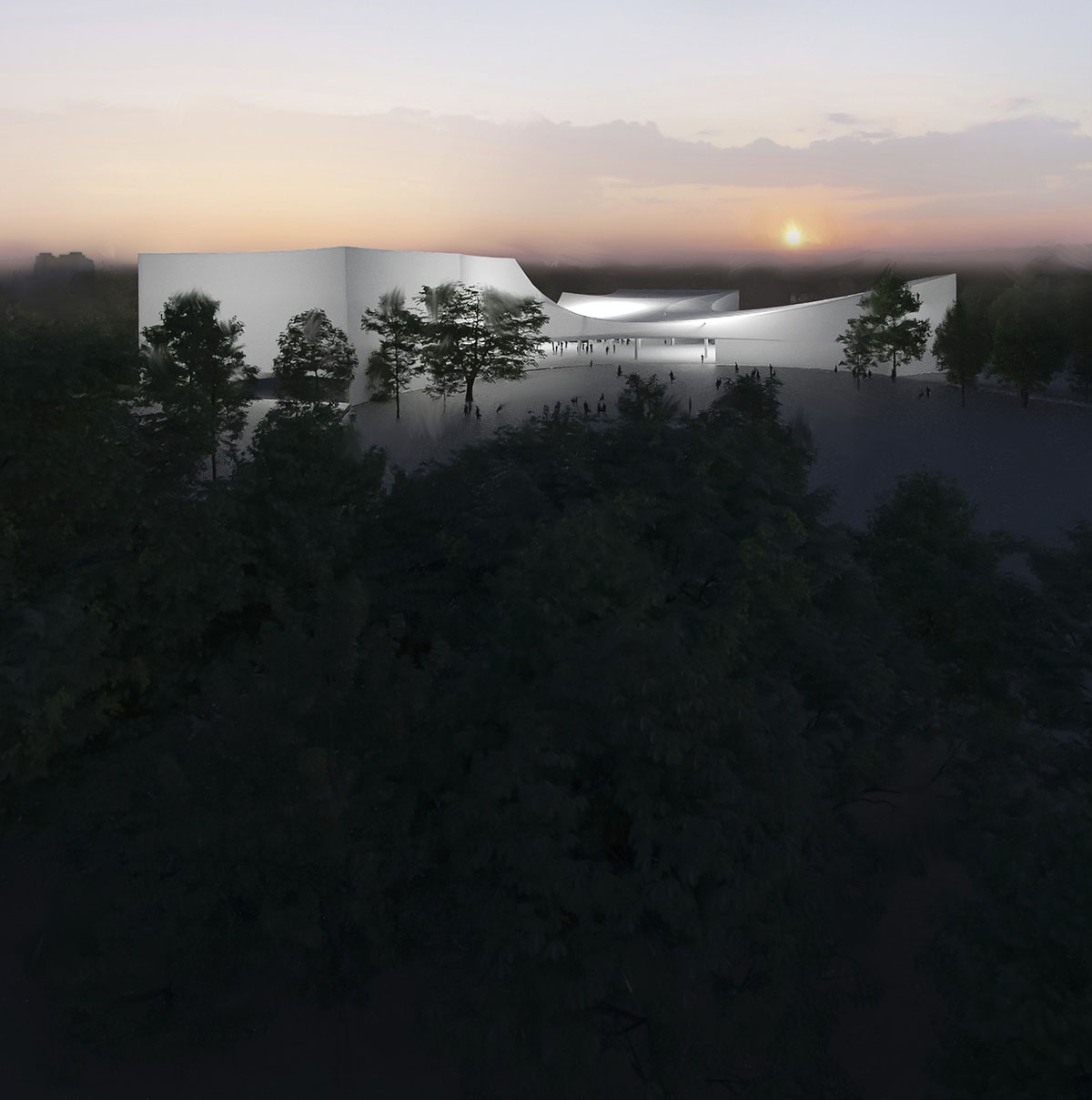 An international jury comprising architects, concert hall and competition experts, as well as representatives of the organising bodies, assessed designs developed to a detailed brief and technical concepts drawn up by strategic arts and culture planning consultants Arup, and the Plan of Detailed Regulation of the City of Belgrade.

The jury evaluated the final six applicants and selected AL_A as the winner. An overview of the shortlisted proposals is available on the UNDP website.

"You couldn’t dream of a better site than this to message Serbia’s vision for the future. The magnificent setting of Ušće Park, on the banks of the River Danube, sends a powerful message about transforming and rewilding our cities to make them greener, more beautiful spaces," said Amanda Levete, principal of AL_A.

"The Concert Hall will be an expression of harmony between nature, architecture and music, at a pivot point in Europe where East meets West."

"It will be a place where people from all places and cultures, of all ages and abilities, come together to delight in music from every genre," Levete added.

AL_A draws inspiration from the landscape of the River Danube and the parkland setting. The studio aimed to reflect "an expression of harmony" that merges the landscape with the geometry of the whole structure. 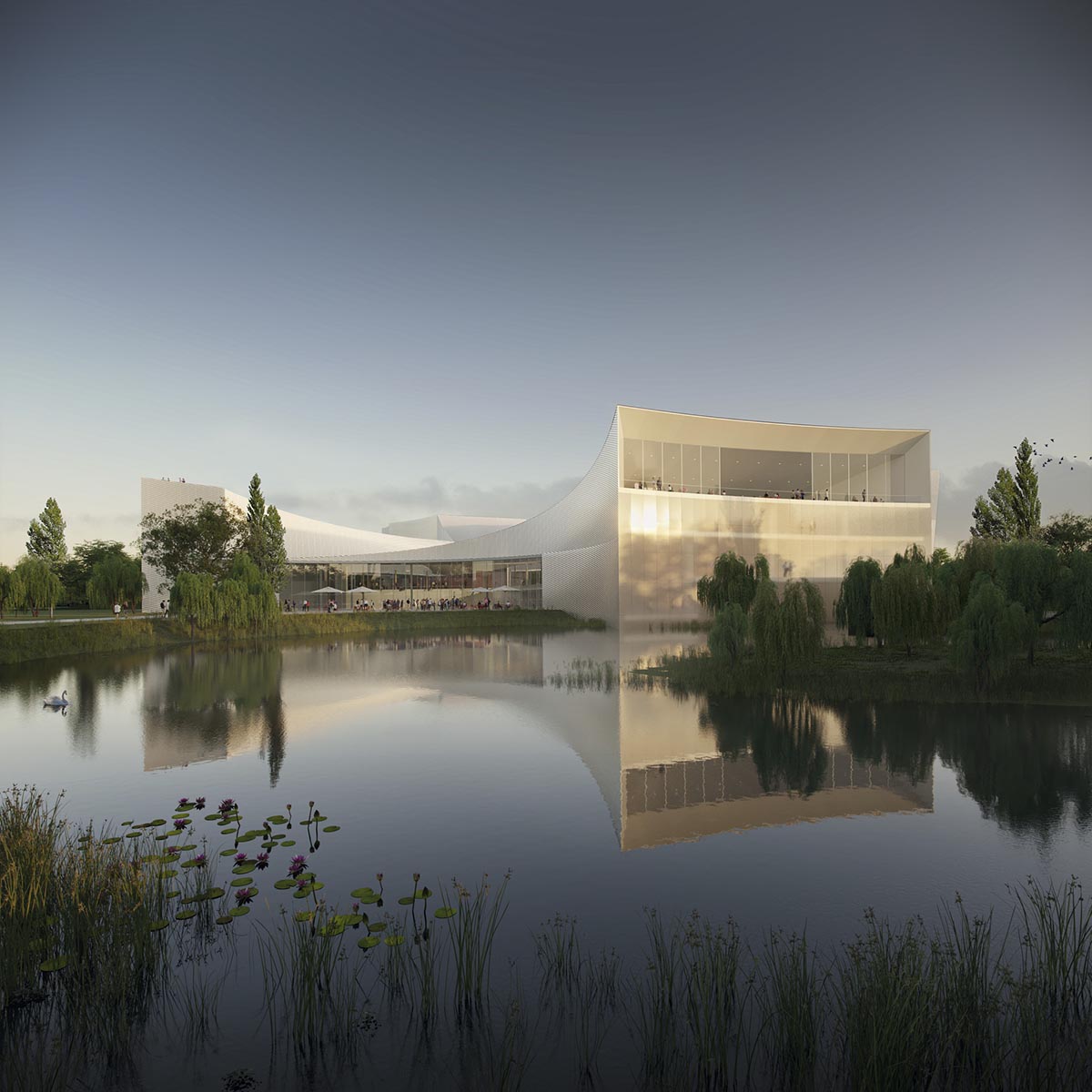 "Using water to reflect the building and surrounding nature evokes the marshland that originally allowed the Serbian people to flourish here," stated AL_A in a project description.

"Re-wilding the park as a setting for the new Concert Hall sends a progressive message about the need to transform our cities and make them greener, cleaner and more beautiful."

"Now more than ever, the tensions between nature and cities must be reconciled. We do this here by imagining the Belgrade Concert Hall as an expression of harmony. Harmony between building and landscape, between east and west, between old and new, between generations and between cultures," the studio added. 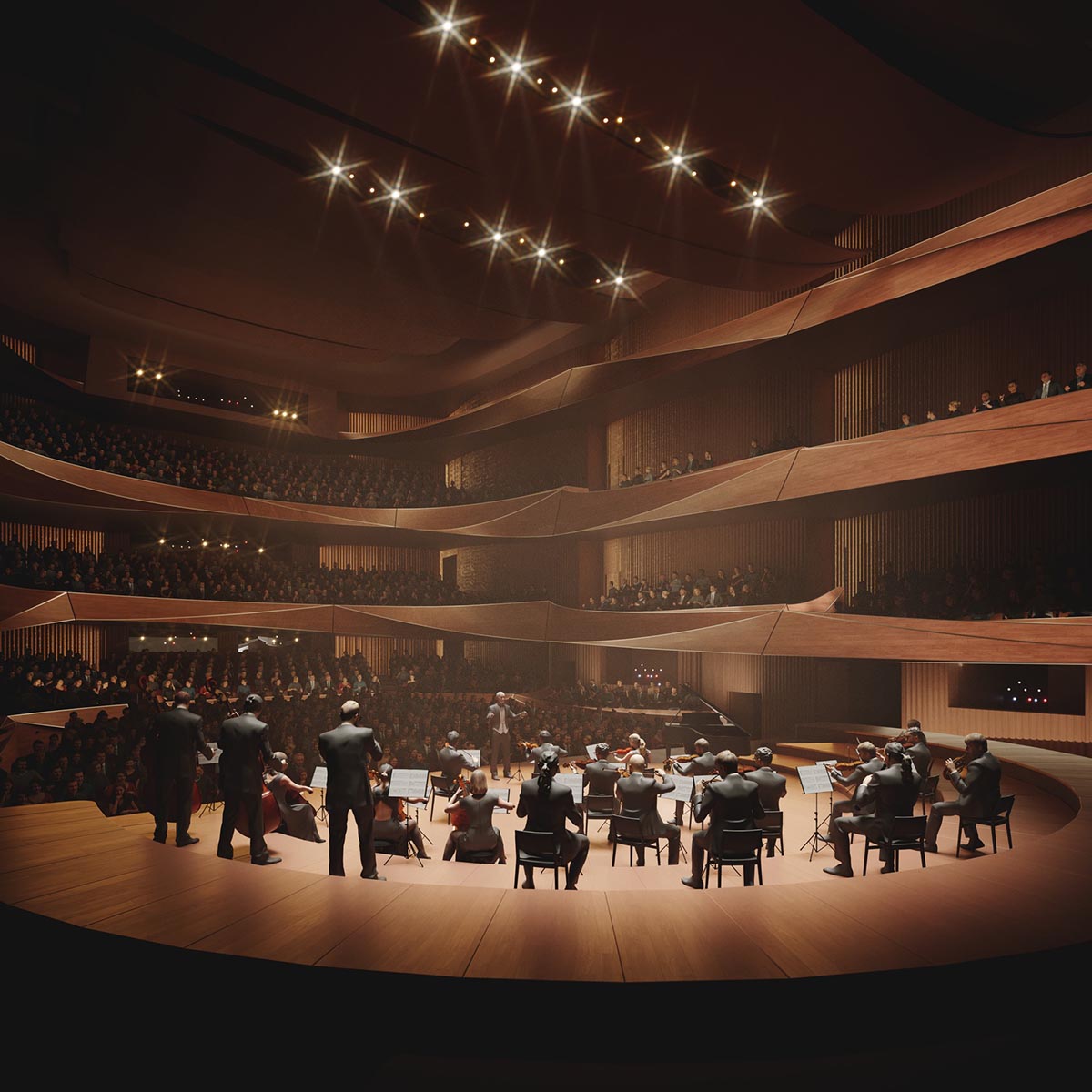 Merging four venues together in a flowing layout, the venues encircle a social space that forms the heart of the Belgrade Concert Hall, with shared back of house facilities positioned below the newly created town square.

Through this arrangement, AL_A designs a building that has no front or back façade, creating "an architectural panorama".

The building and the new shared social space at its heart gather under a draping canopy that spans each venue, resting softly in between. Through this expressive form, the building speaks of the movement of music.

"The materiality of this envelope will create a rippling effect that mirrors the dappled waters of the River Danube, reflecting the changing landscape through the seasons, and signalling a new monument of culture," said AL_A. 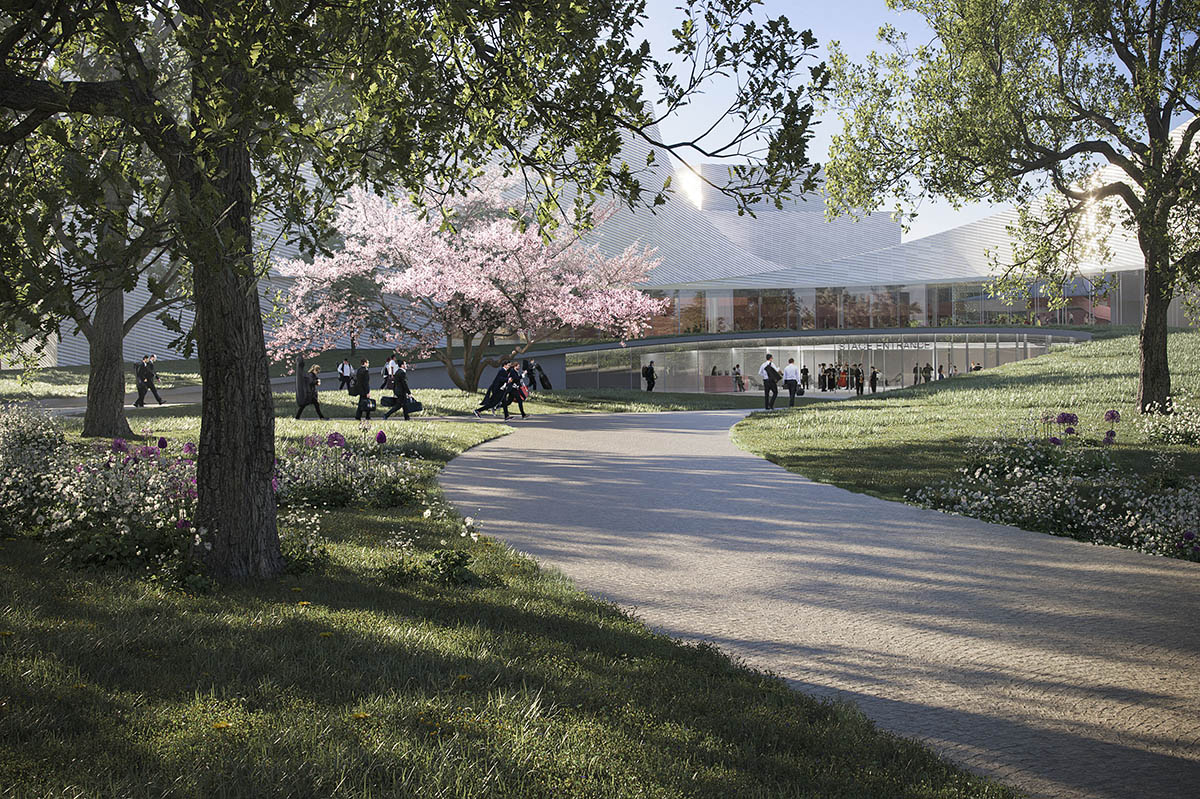 "The Belgrade Philharmonic Concert Hall is the largest cultural infrastructure project in Serbia, and the region, and will be one of the largest in Europe itself. I am proud that this decades-long dream, of our professional musicians, young talents, music lovers and the people of Serbia, is finally coming true in such a beautiful shape," said Ana Brnabić, Prime Minister of Serbia.

"I believe that this Hall will be one of the greatest cultural legacies of this Government. Investing in culture and in education is crucial for setting the pillars of a succesful and strong modern country." This is something we have began with numerous similar cultural projects." 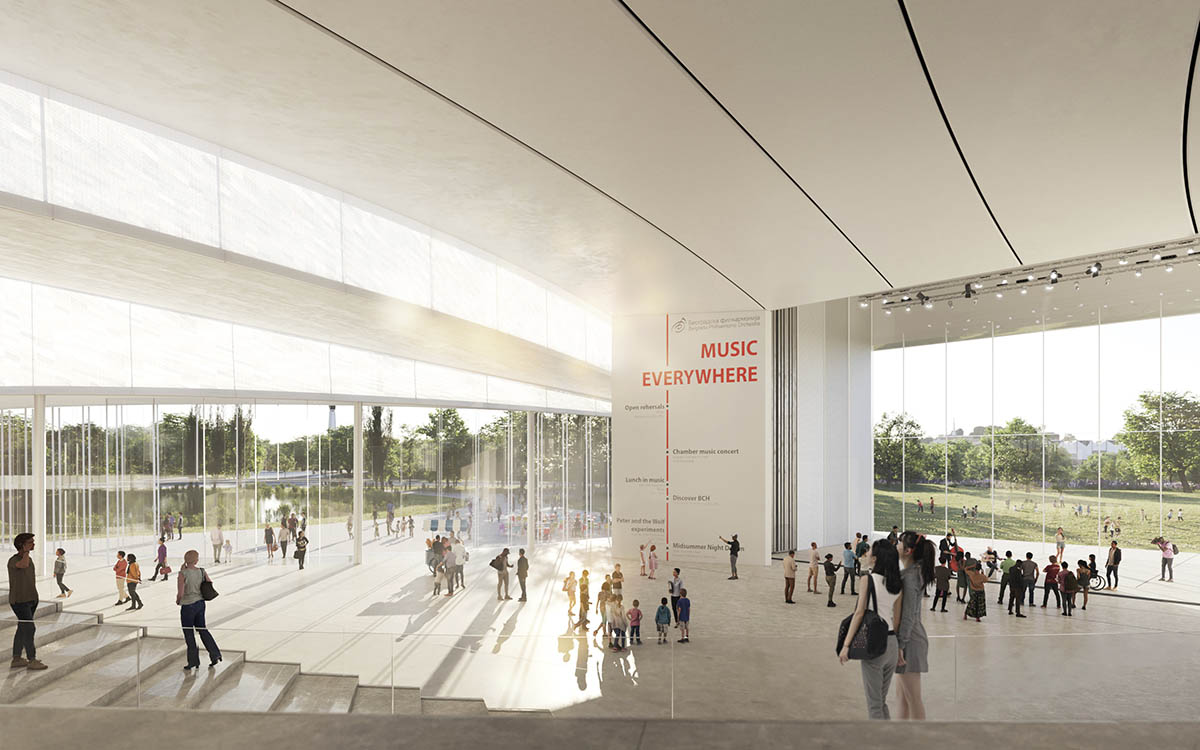 "This Concert Hall is most definitely going to become a new landmark of Belgrade and attract visitors and tourists to our country. Furthermore, with its quality programs it will enrich our citizens’ cultural life. I strongly believe that it will become another regional hub for making contacts and knowledge exchange, with the flow of creativity, ideas and experience of both domestic and foreign artists," Brnabić added. 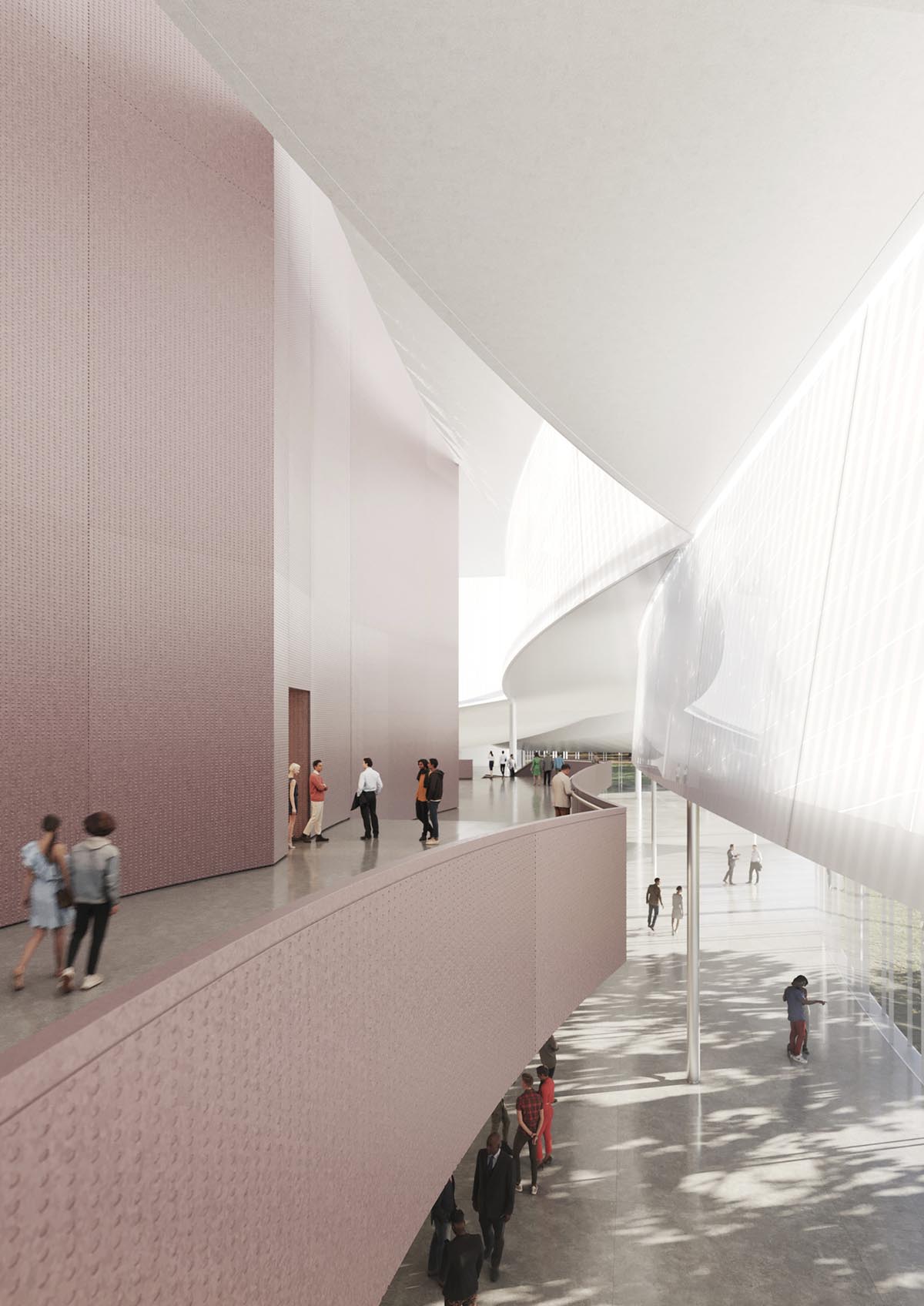 The firm's completed projects include the Victoria & Albert Museum Exhibition Road Quarter in London and the Museum of Art, Architecture & Technology in Lisbon. AL_A is currently working on the wold's first magnetised target fusion facility in Culham, UK.

Rustic Canyon designed by Walker Workshop features light-filled and creamy interiors in Los Angeles
May 13, 2022 • 1254
Kengo Kuma and Associates designs commercial building covered by plants in downtown San Jose
May 09, 2022 • 1048
World Architecture Festival and World Festival Of Interiors open for entries for Its 2022 edition
May 09, 2022 • 1038
Morphosis' University of Texas, a new arts campus breaks ground at Dallas
May 12, 2022 • 1019
Field Conforming Studio installs steel sculpture with nine hollow columns in Tangshan
May 11, 2022 • 791
JKMM Architects transforms former buildings into a new building for University of the Arts Helsinki
May 11, 2022 • 769