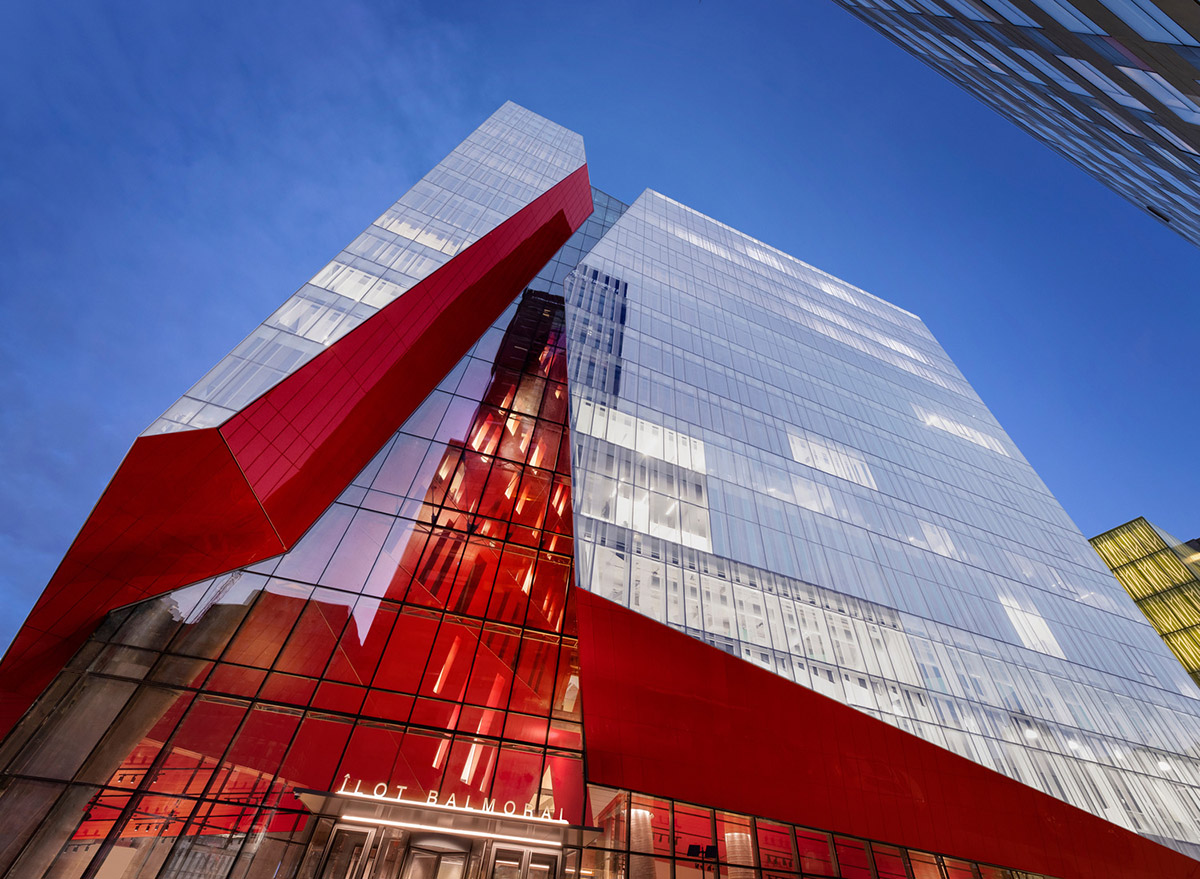 Canadian architecture firm Provencher_Roy has designed a mixed-use office tower in Montréal with a red-colored diagonal slit, dividing the volume into two and creating a large internal atrium.

The 27,850-square-metre project was completed as one of the final major developmental pieces of the Quartier des Spectacles - the city’s major cultural district - in downtown Montréal, Canada. The new landmark structure sits adjacent to Place des Festivals.

The 13-storey mixed-use office building, named Îlot Balmoral, was commissioned by the Société d’Habitation de Montréal (SHDM) and rises as a testimony to Montréal’s creative economy.

While its glass-enclosed façade makes its presence evident, the red slit drawn in the middle of the building in a diagonal way makes the building interesting and recognizable. 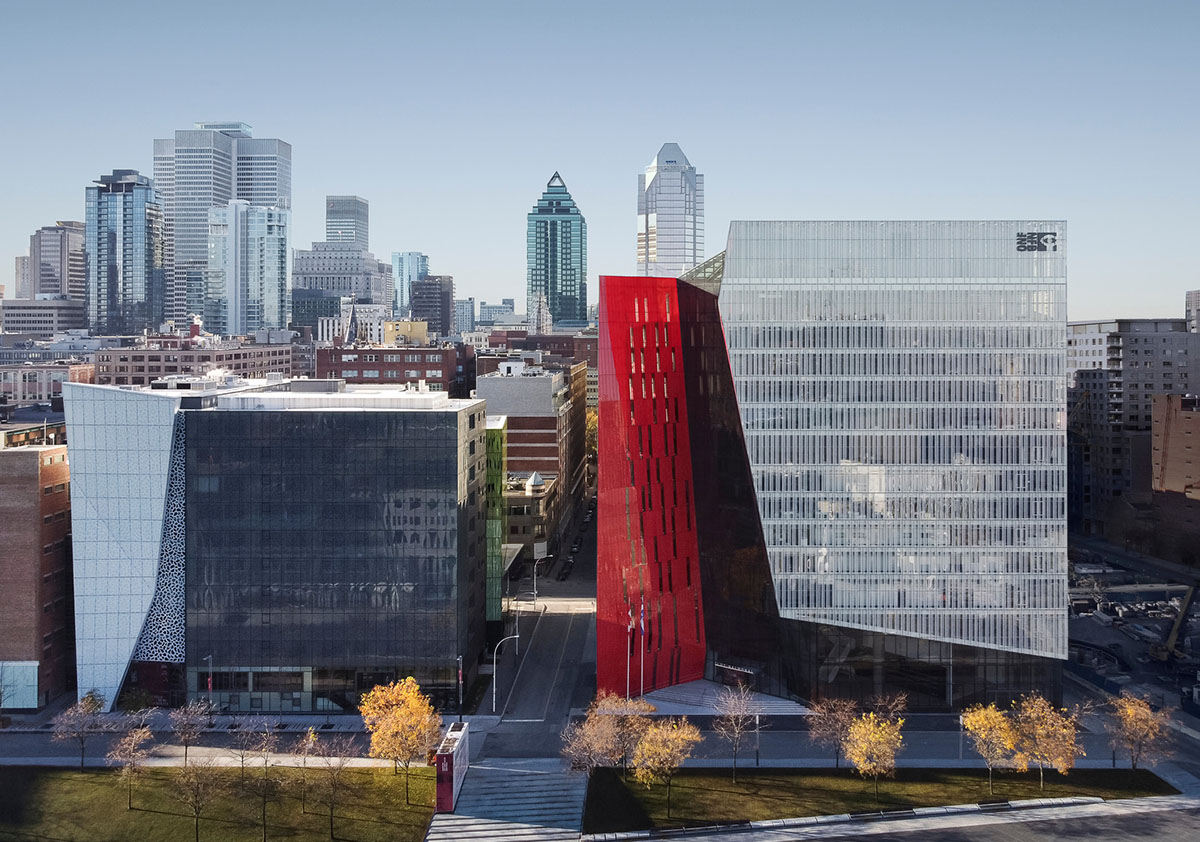 "We proposed four visions of what an office building specifically designed for a cultural economy could look like, and Îlot Balmoral was selected to echo the very vibrant, dynamic nature of the district,” said architect Claude Provencher, founding partner at Provencher_Roy.

"The Quartier des Spectacles is a cultural centre of activity that is now almost complete in its revitalization and transformation of the urban fabric surrounding Place des Arts." 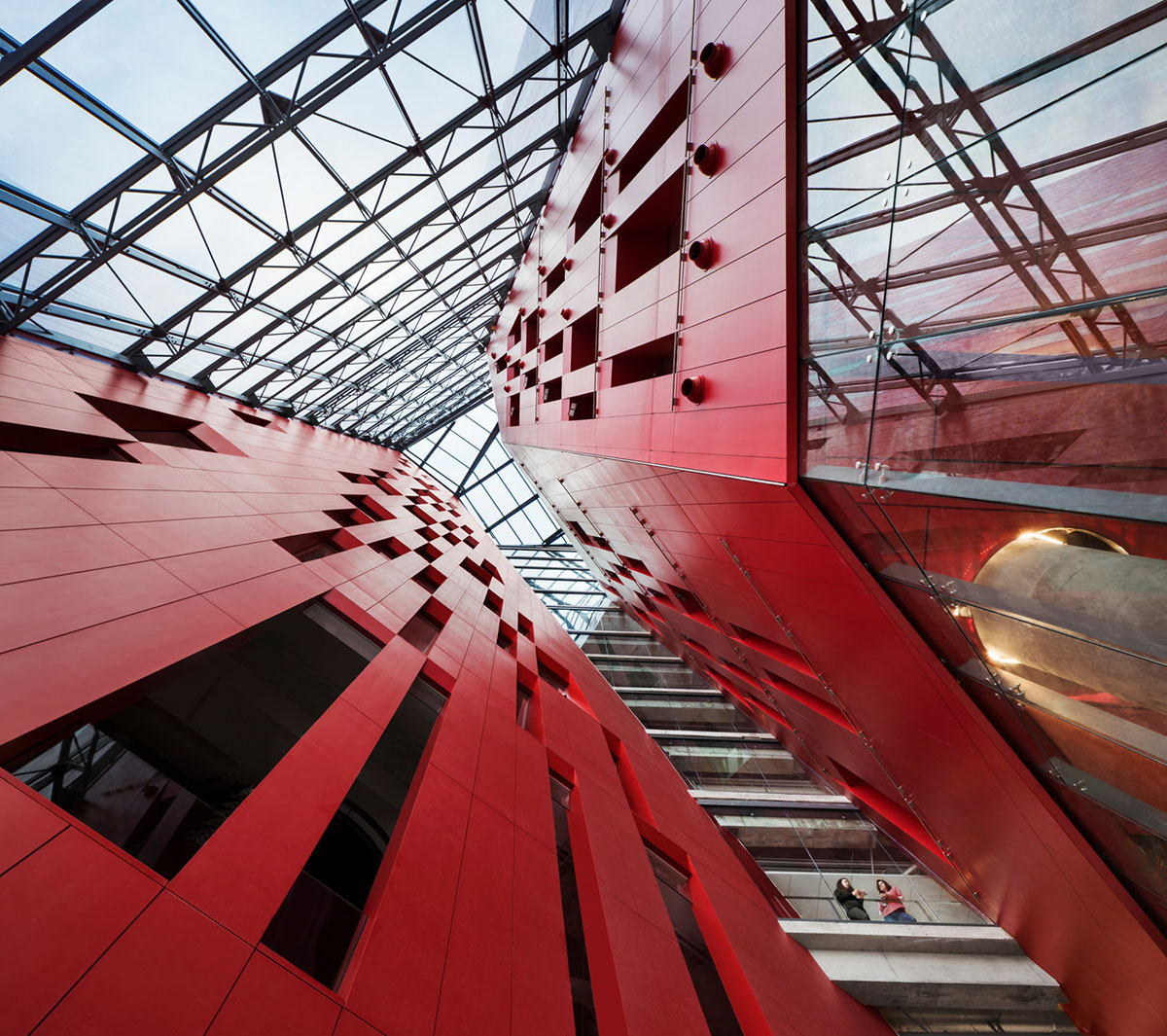 An architectural symbol of creativity

On the surface, Îlot Balmoral is conceived as a highly dynamic structure rising up from the urban fabric. The tower is designed with almost perfect cube which is very clean and slick. The exterior of the tower is wrapped in glass, comprising white frit pattern and translucent panels.

"The smooth and seamless exterior positions the façade as a potential giant screen against which projections of Quartier des Spectacles initiatives can be presented," said Provencher_Roy.

"Subtle and dynamic tonality provides a sense of mass and substance to the structure, and the glass façade provides an enormous infusion of light into the building." 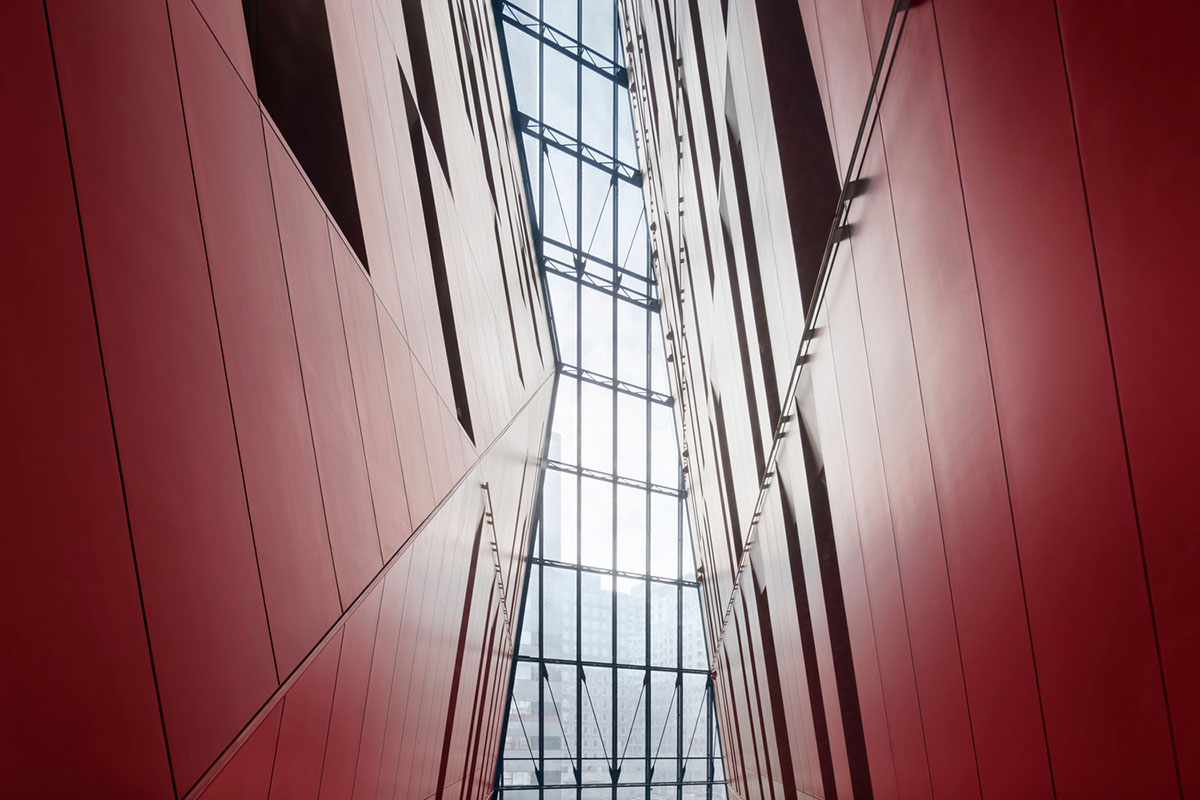 On the exterior, the frit pattern also serves to control thermal heat gain inside of the building, which meets the firm’s LEED Gold sustainability objectives.

Thanks to the exterior façade’s infusion of light, it dynamically highlights a large internal atrium as the atrium is carved diagonally through the centre of the building to create two volumes. This giant cut-out also allow the light to penetrate inside. 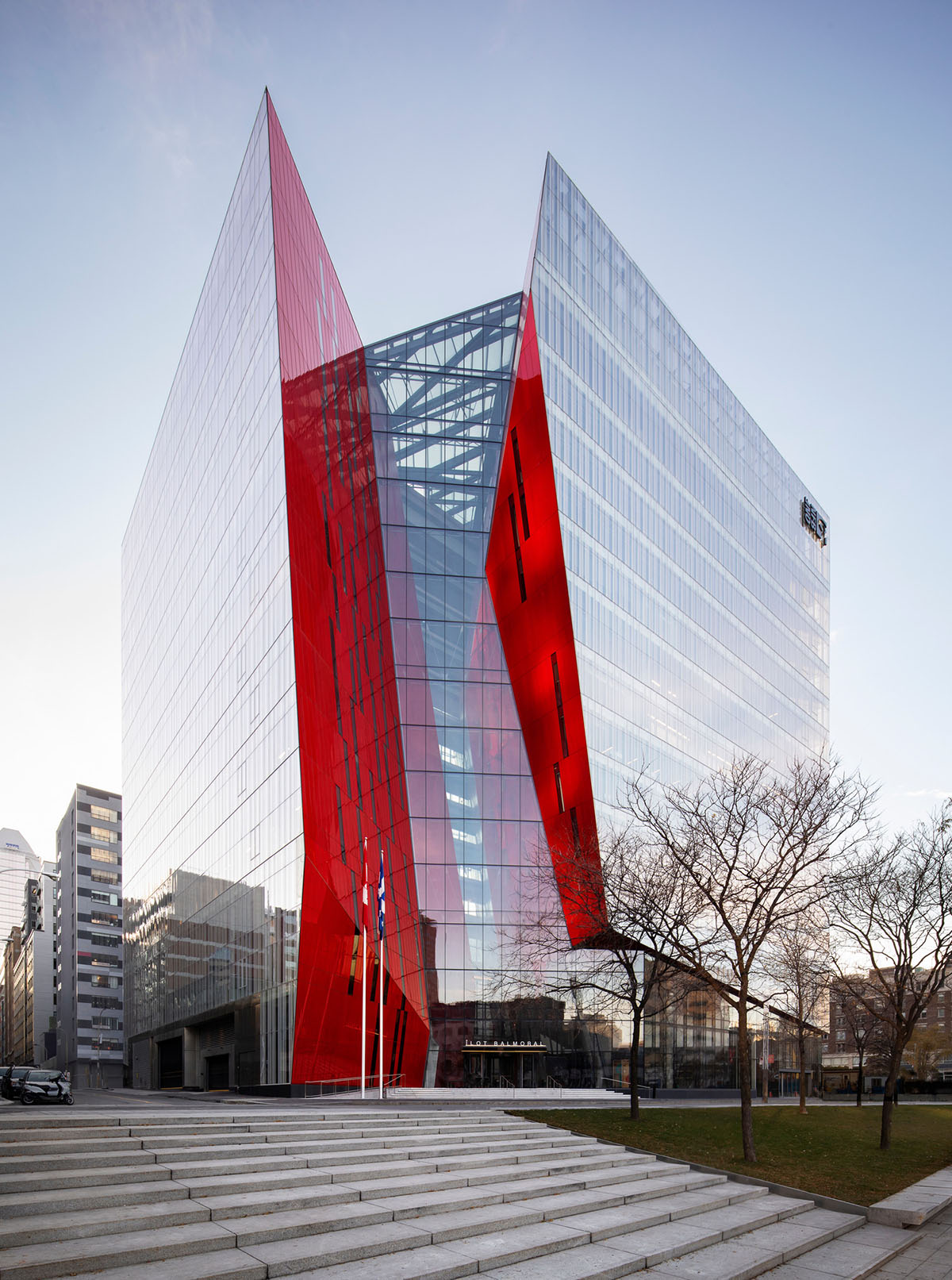 The firm created the giant red-colored cut according to the site’s previously existing pedestrian flow, which represents a moving diagonally between the Place des Arts Metro station and Place des Festivals.

"To delineate the cut, and to make the building’s mark on the skyline, a bright red external fold contrasts against the clean glass exterior," the office added. 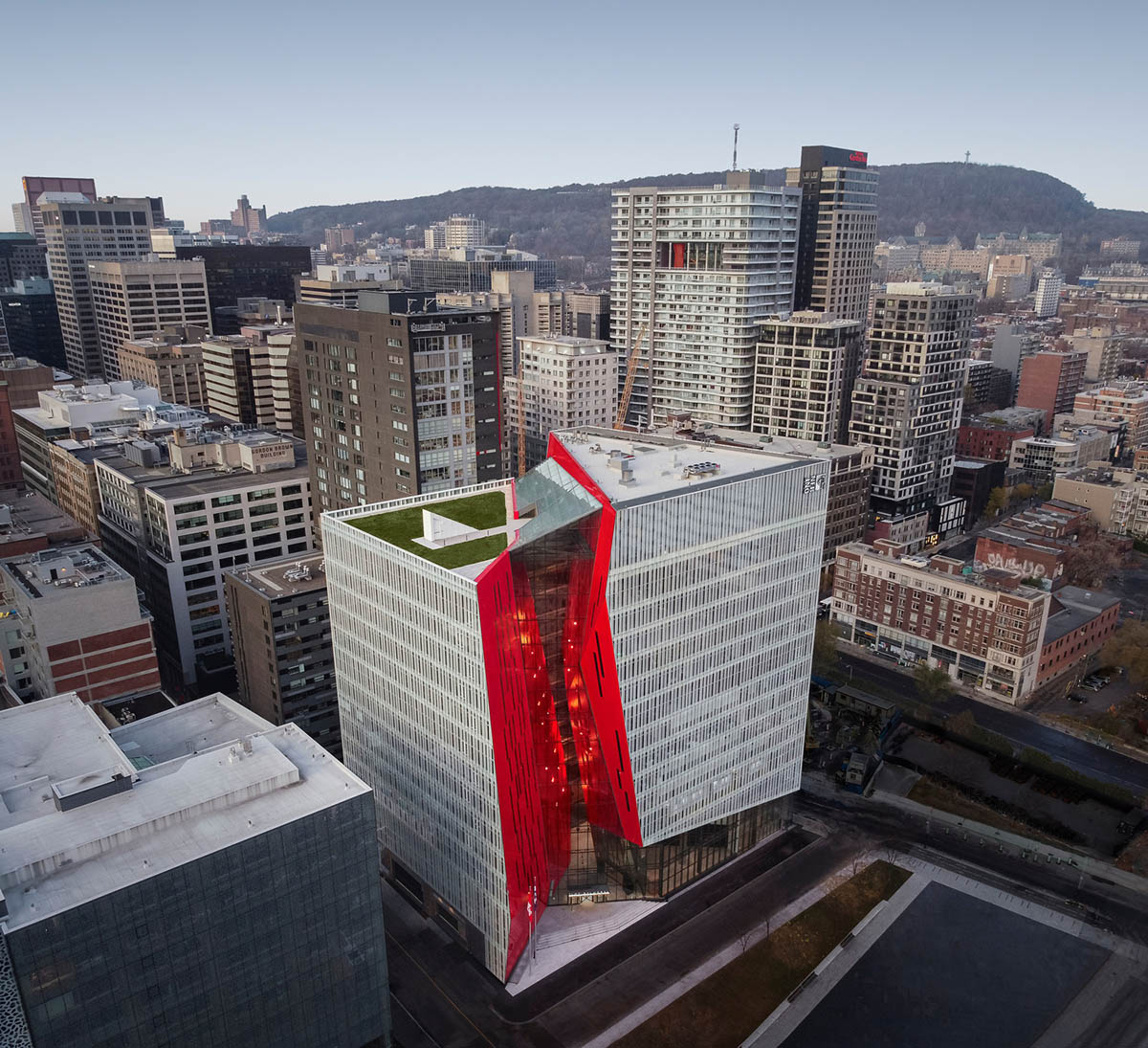 The team preferred to use the red color, evoking the cultural branding materials of the Quartier des Spectacles, and according to the studio, "this large diagonal cut serves to distinguish Îlot Balmoral from the functions of more traditional office towers in the district."

As a nod to Îlot Balmoral’s importance to Montreal’s creative scene, the National Film Board of Canada signed on as the building’s core tenant. 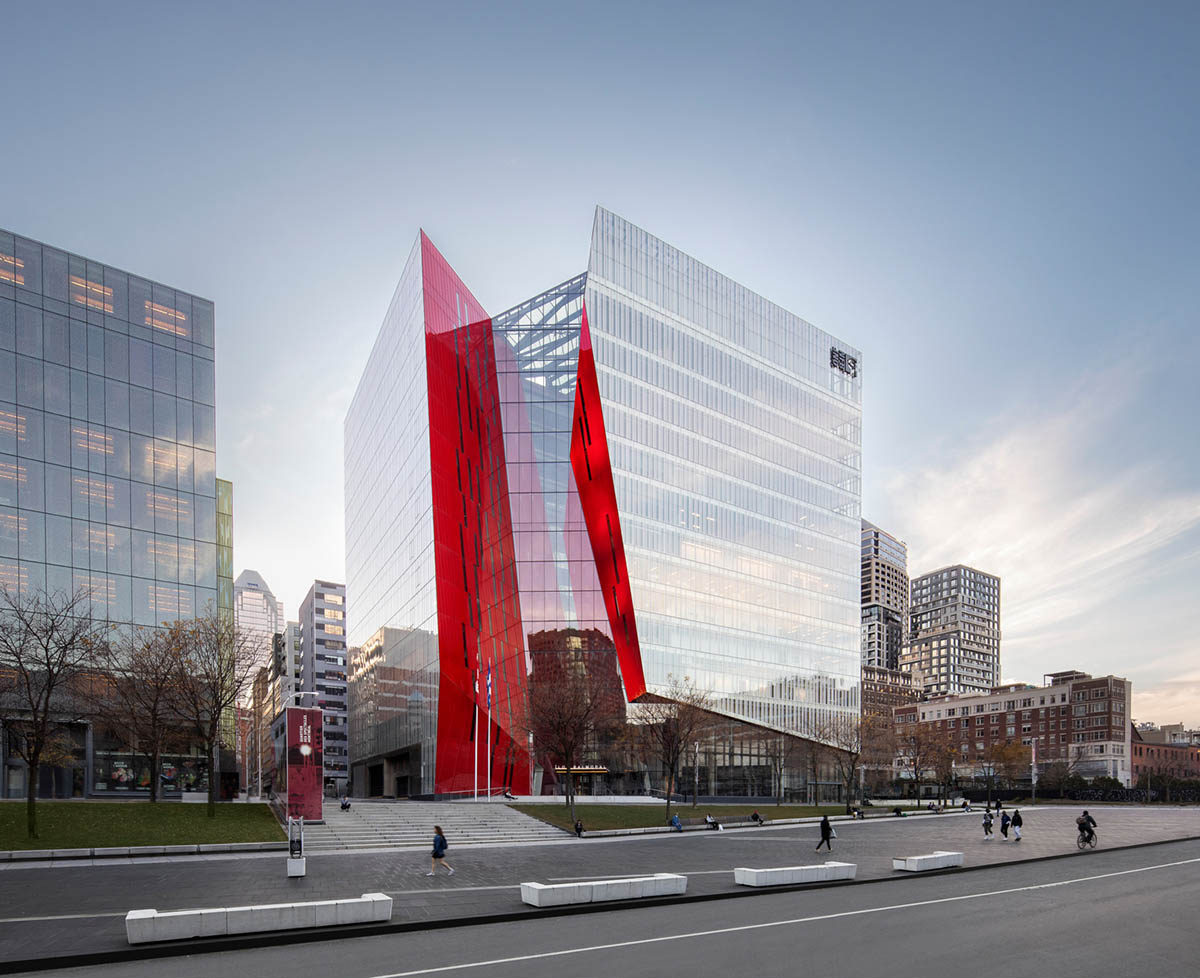 As Provencher_Roy explained, "Celebrating 50 years of film excellence, the Canadian institution was looking to modernize and transform their facilities, and the move included the reinstallation of the iconic NFB logo in the new lobby, which is a symbol of Canadian design history."

"The National Film Board of Canada (NFB) signing was proof of concept for us that architecture can redeploy and reprogram how neighbourhoods are defined, not only on a visual or physical level, but also in its role as a centre of cohabitation," said Provencher.

"Several other cultural organizations have since signed leases, and Îlot Balmoral is becoming the creative hub that we envisioned." 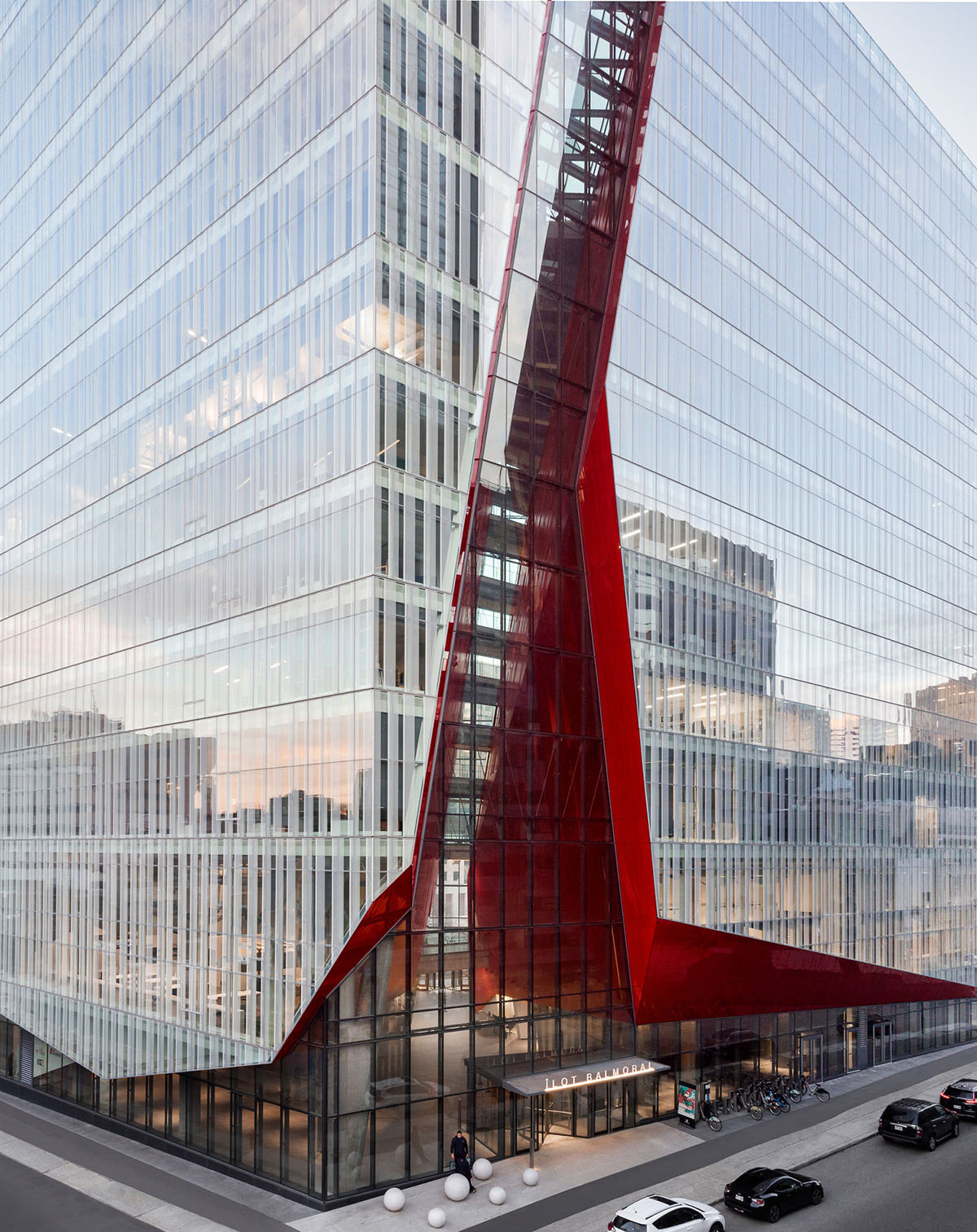 Without requiring any significant changes to the architecture, Provencher_Roy redesigned four floors of Îlot Balmoral for the NFB in order to accommodate their technical requirements, including editing rooms and the hosting of state-of-the-art equipment.

They also built a brightly lit white staircase leading up to the NFB offices, located directly under the red canopy of the building’s main entrance. 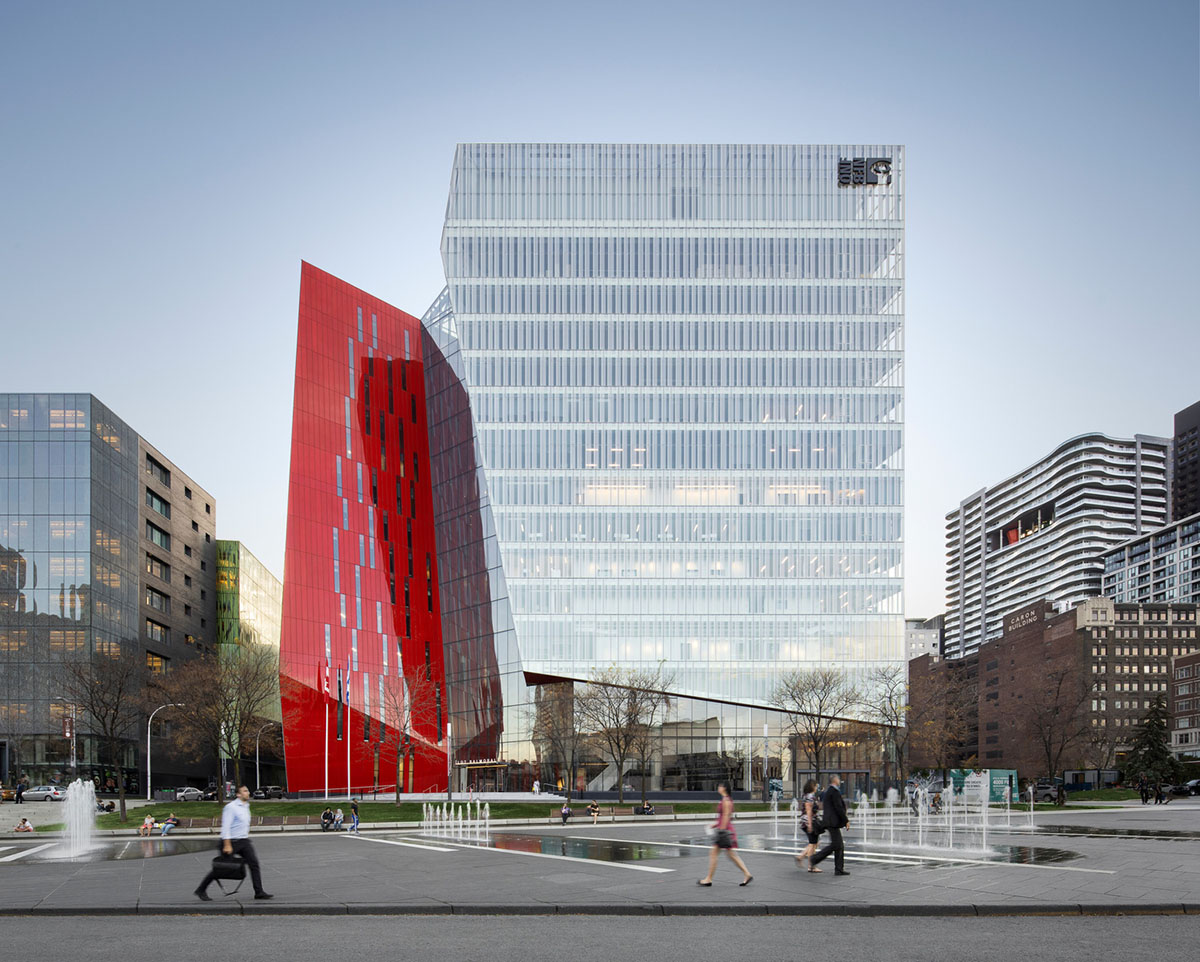 A beacon of vibrancy

Provencher_Roy’s inclusive design strategy embraces the vibrancy of the district by drawing in pedestrian flow across the diagonal cut of the building’s sunlit lobby.

The atrium establishes the lobby’s unique identity, ascending skyward to the building’s glass ceiling amidst a bright material palette of white and light gray walls, and exposed concrete floors. 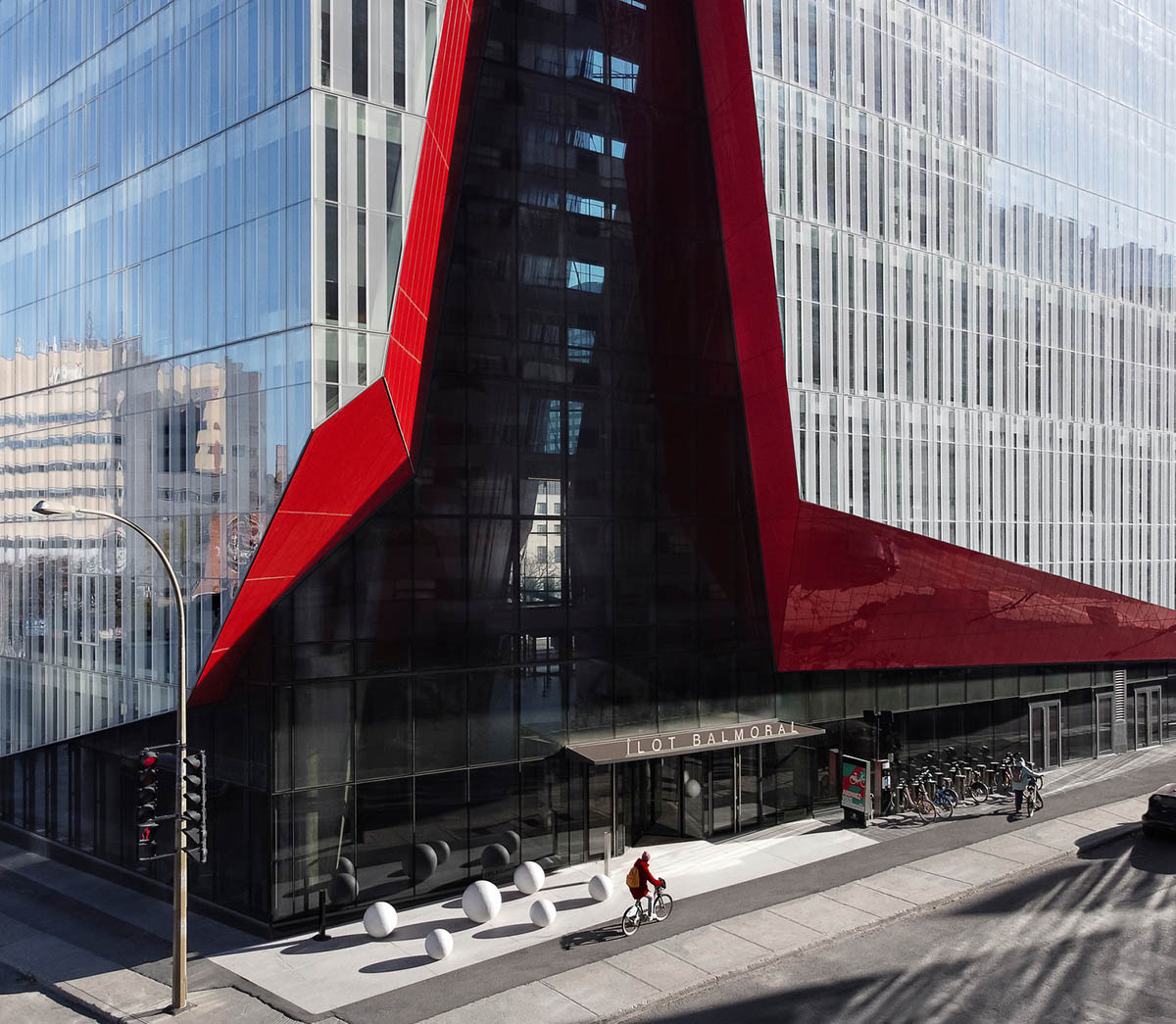 The palette was chosen to reflect and enhance the energy and dynamism of the lobby, anointed with additional features including exposed columns and a signature brass deck. 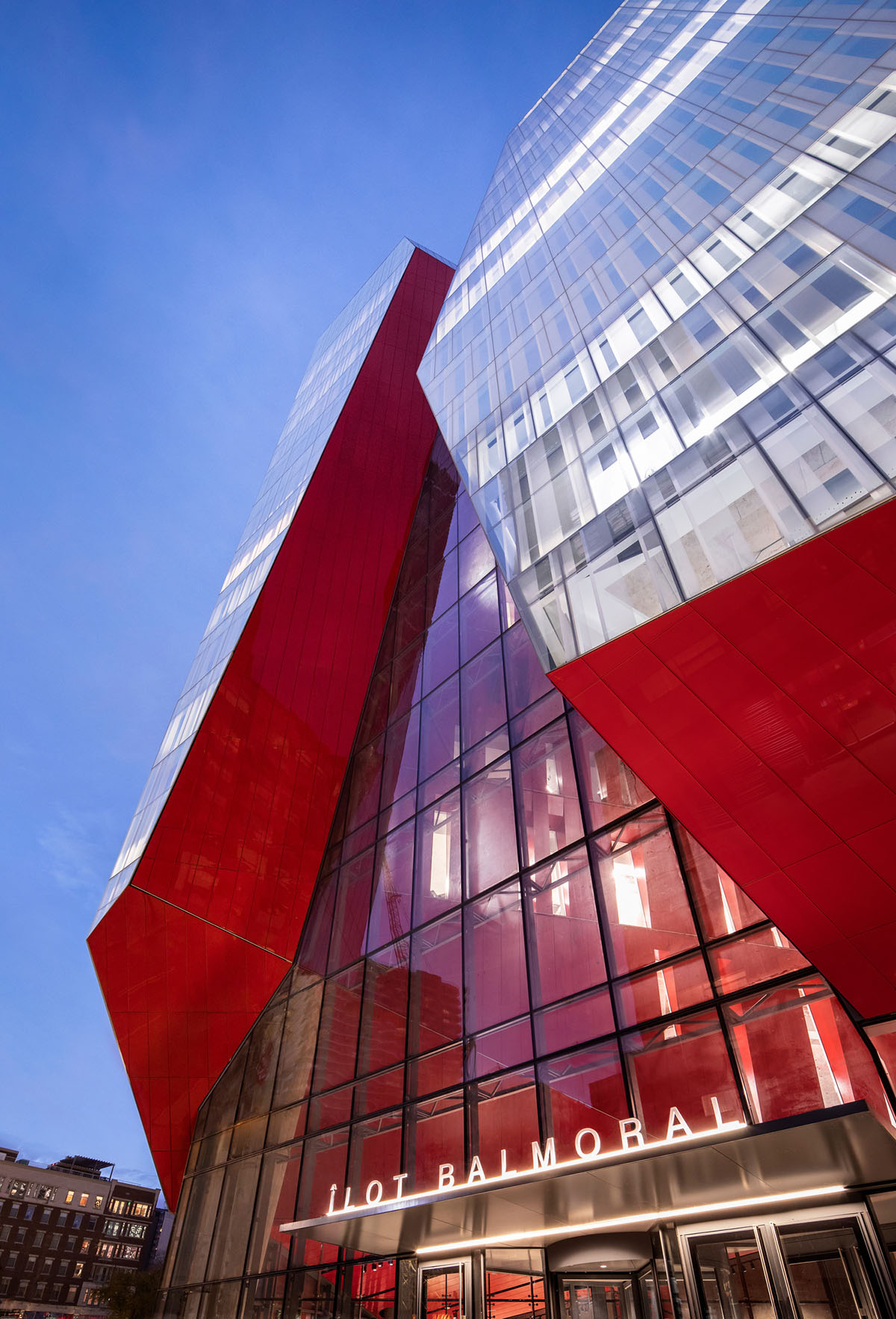 Above the lobby level, the open atrium is framed by brightly lit offices. Pedestrian bridges on every level connect the building’s two volumes, crossing the atrium and providing spectacular views of the surrounding cityscape, with a backdrop of Montreal’s landmark Mont Royal.

The northeastern volume floats one storey higher than the southwestern volume, and the latter hosts a rooftop greenspace with breathtaking city views that is designed for outdoor events. 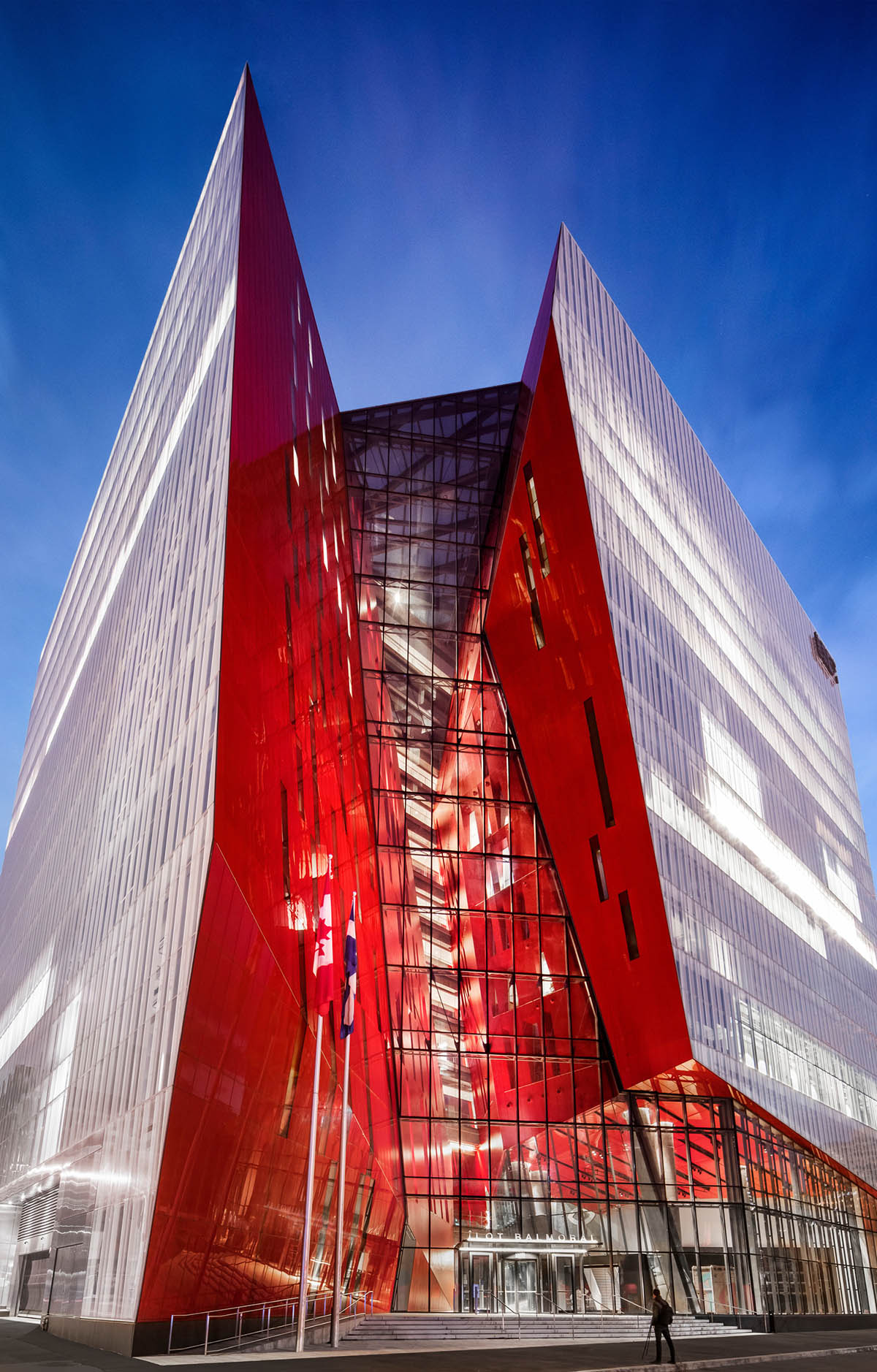 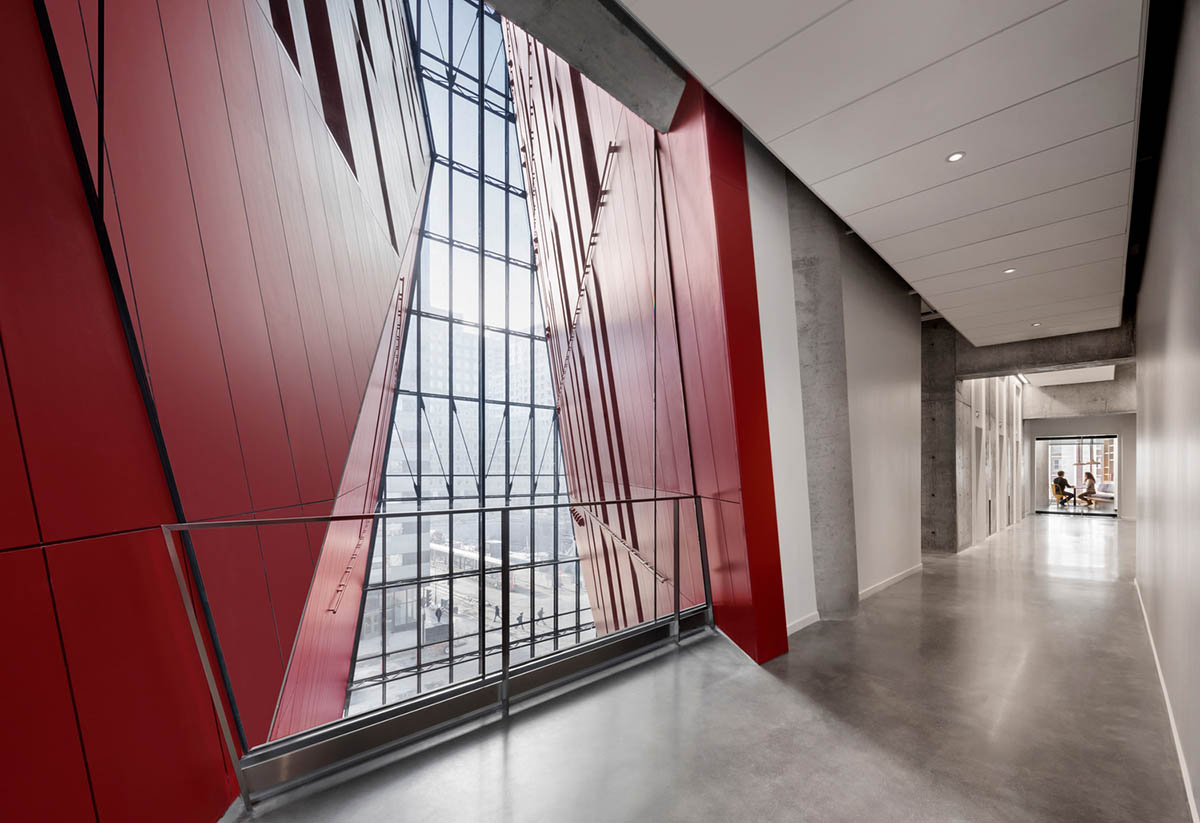 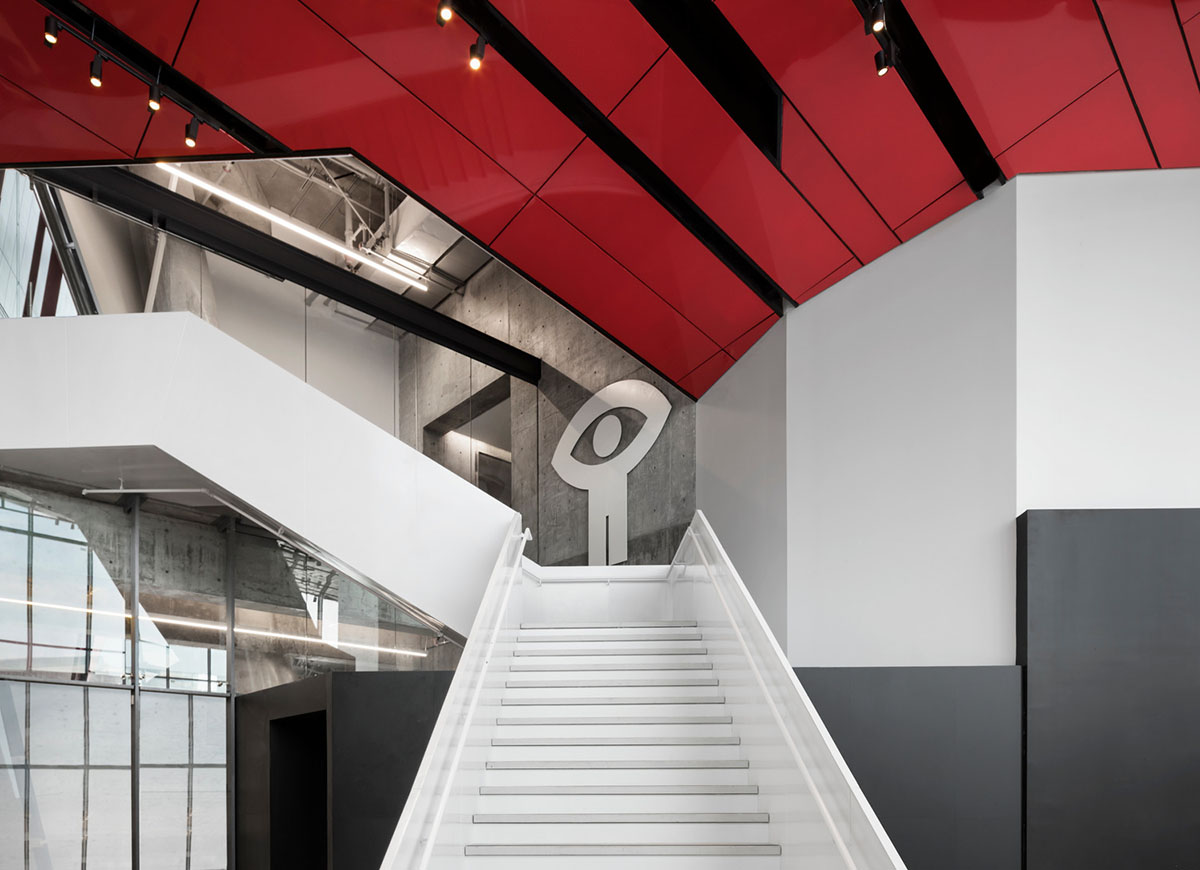 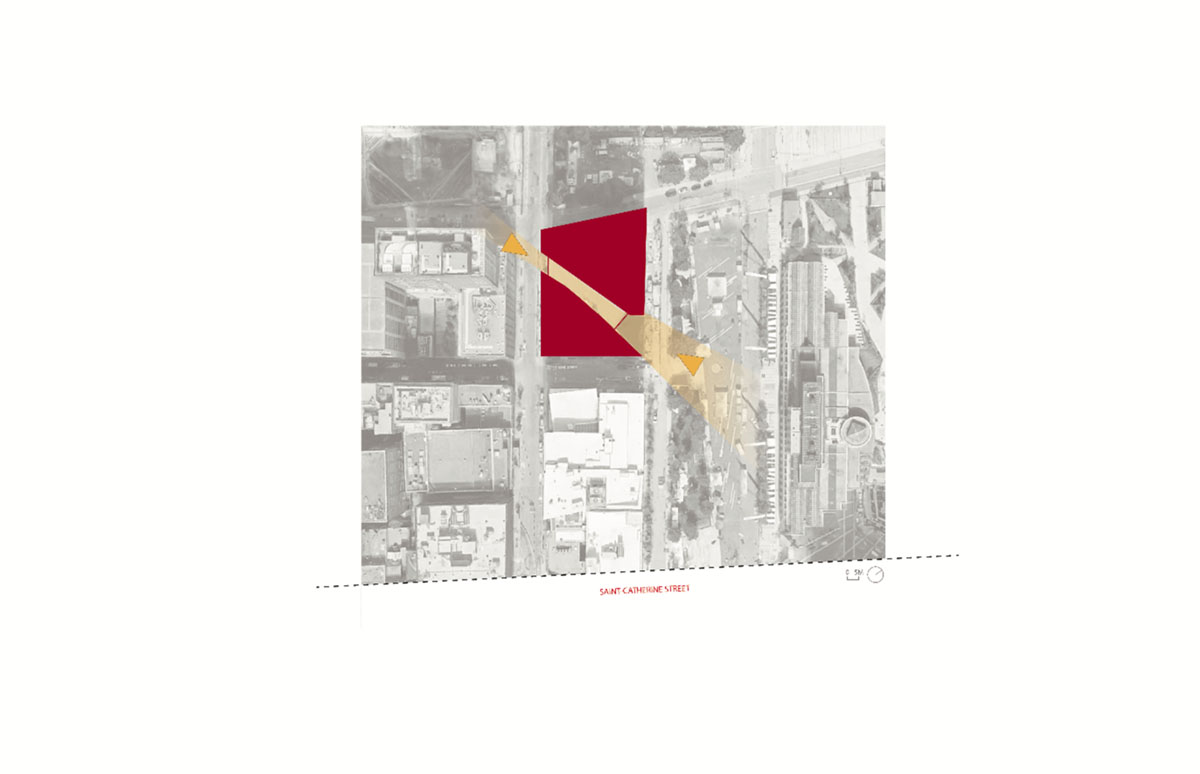 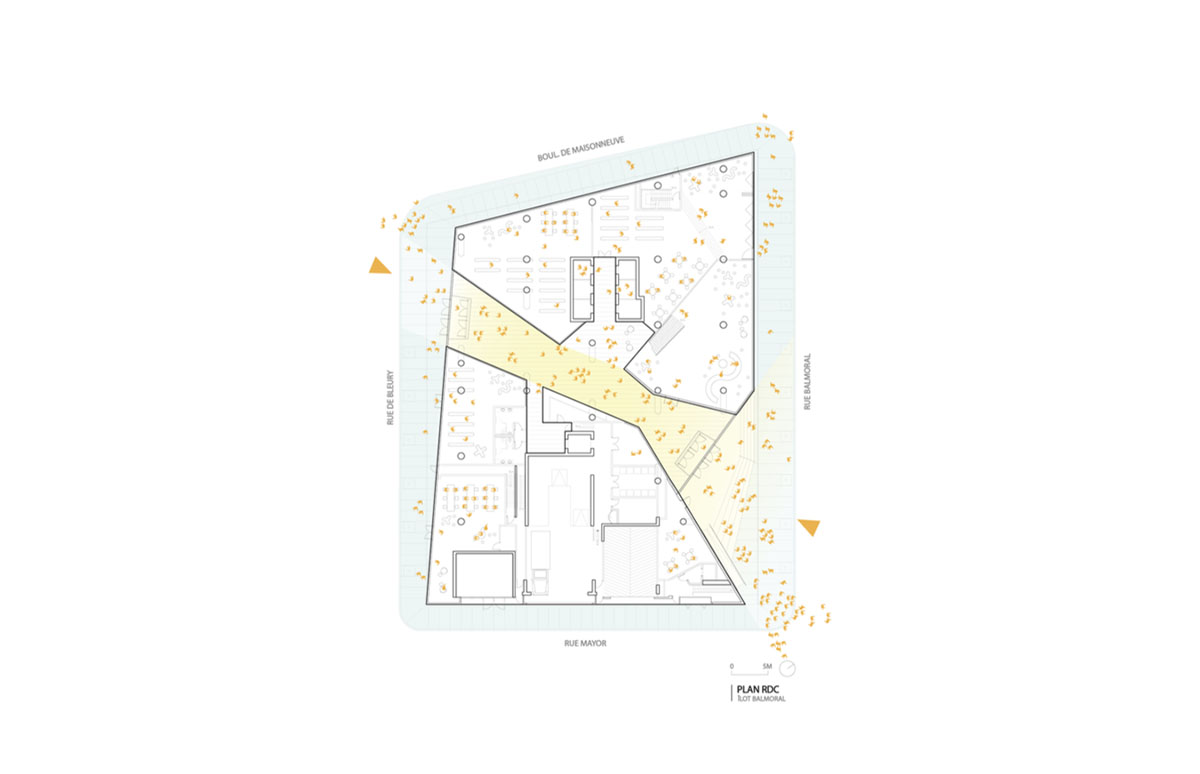 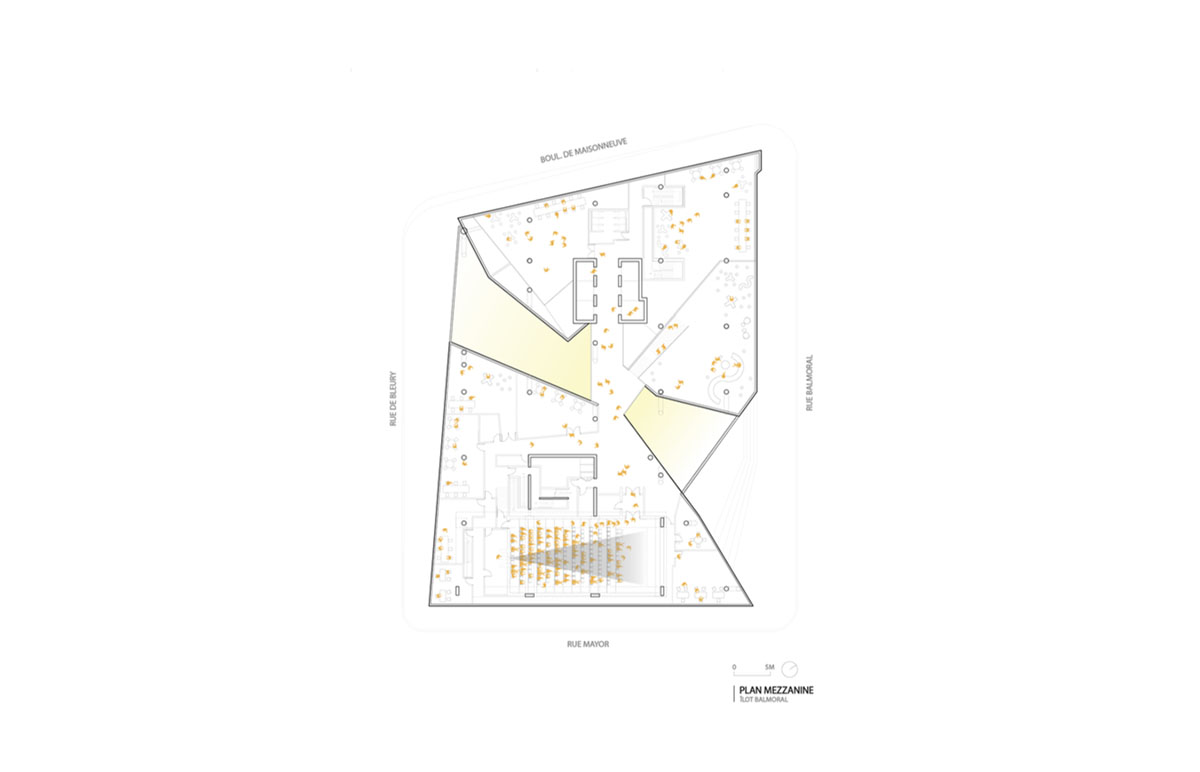 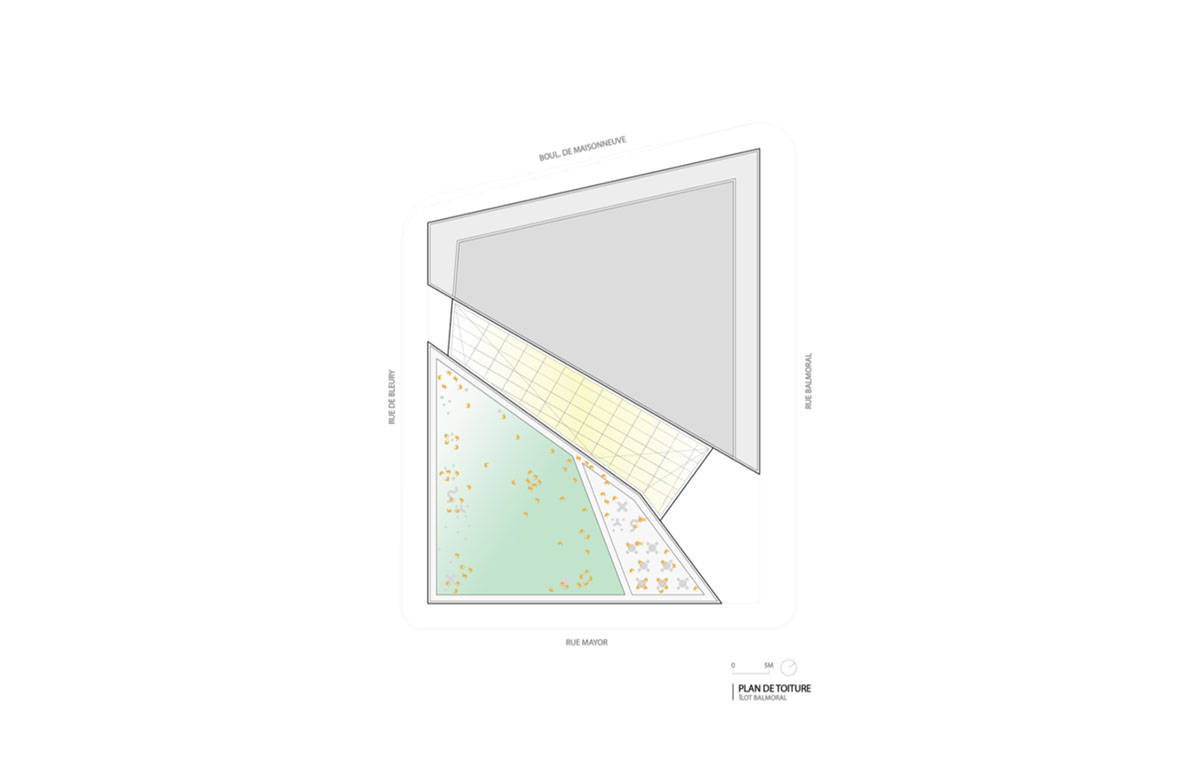 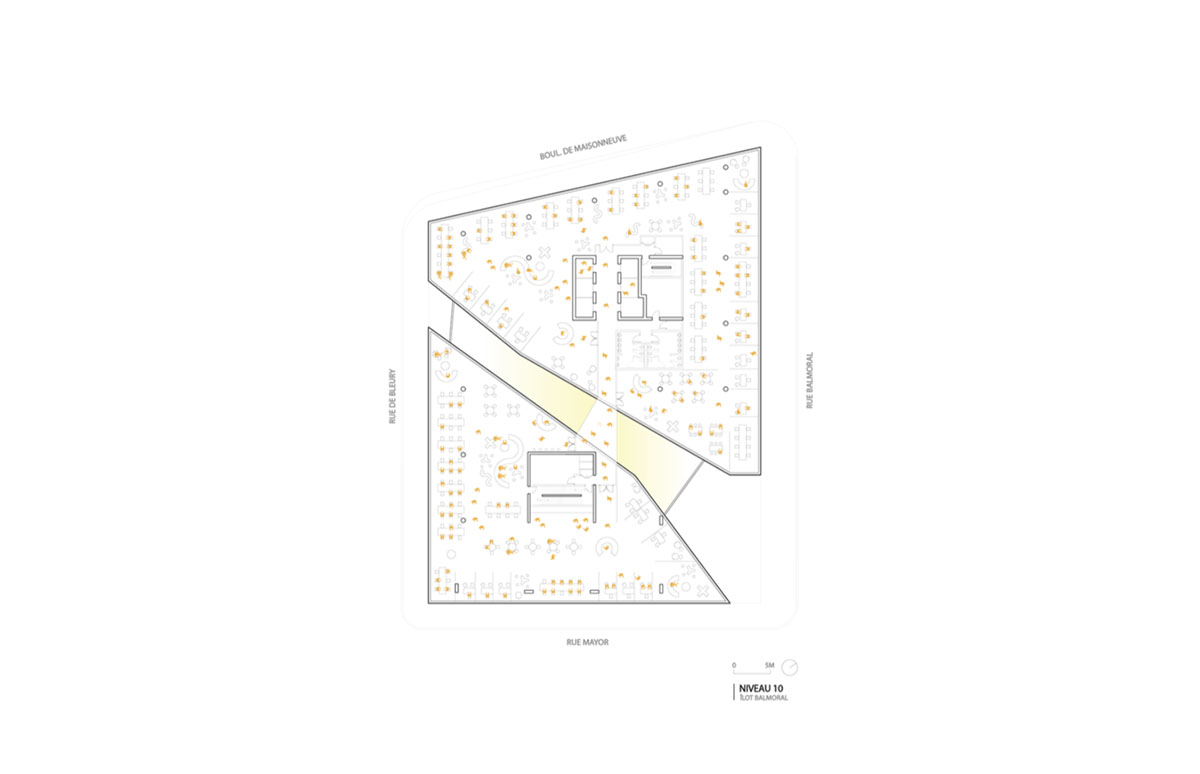 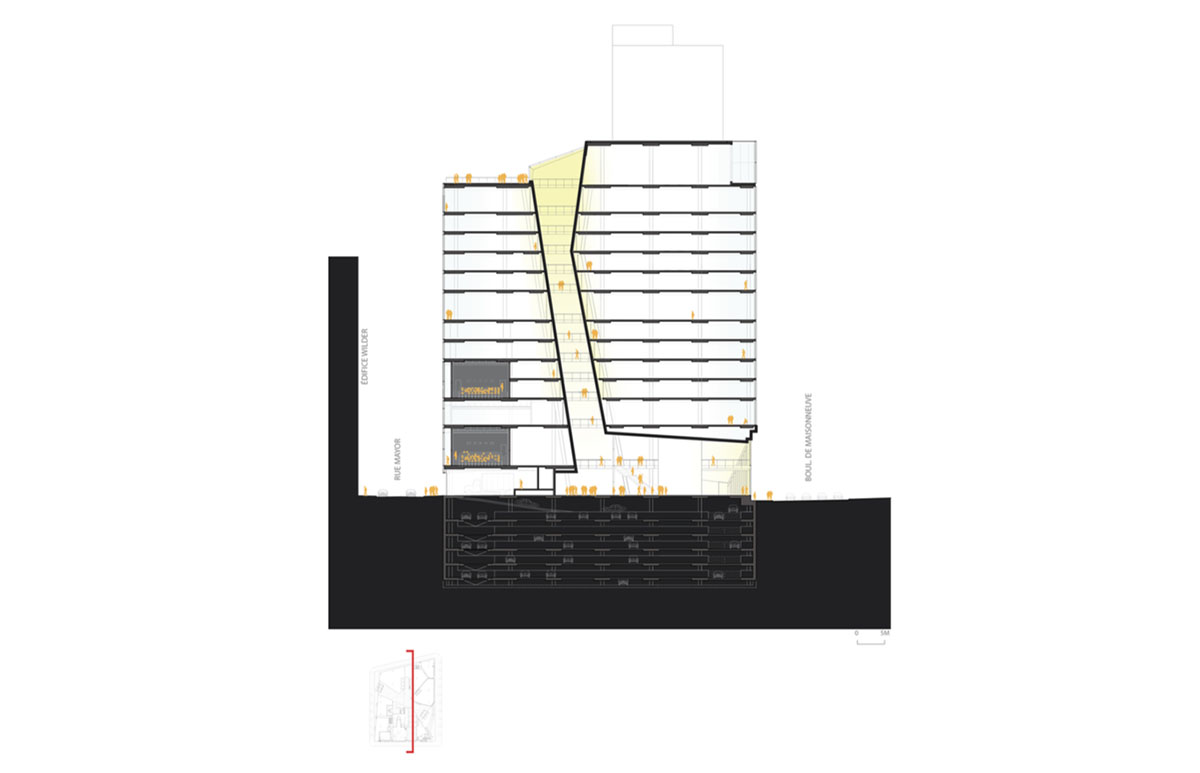 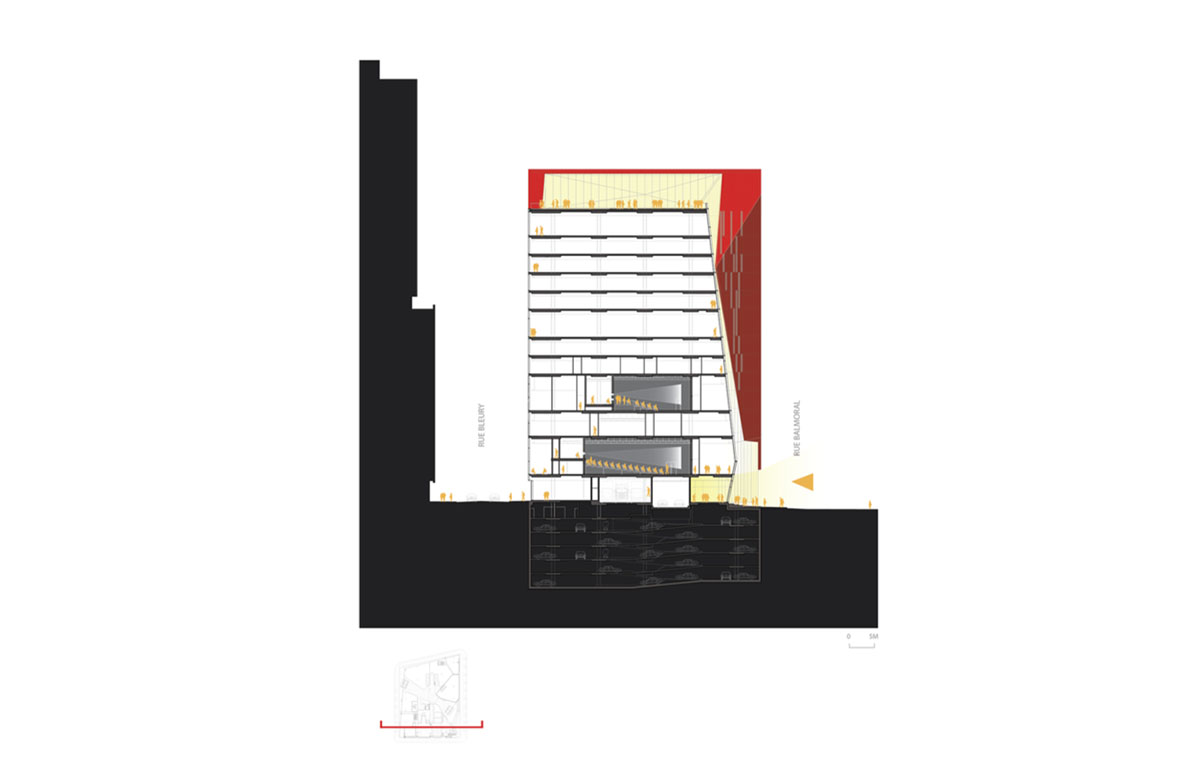 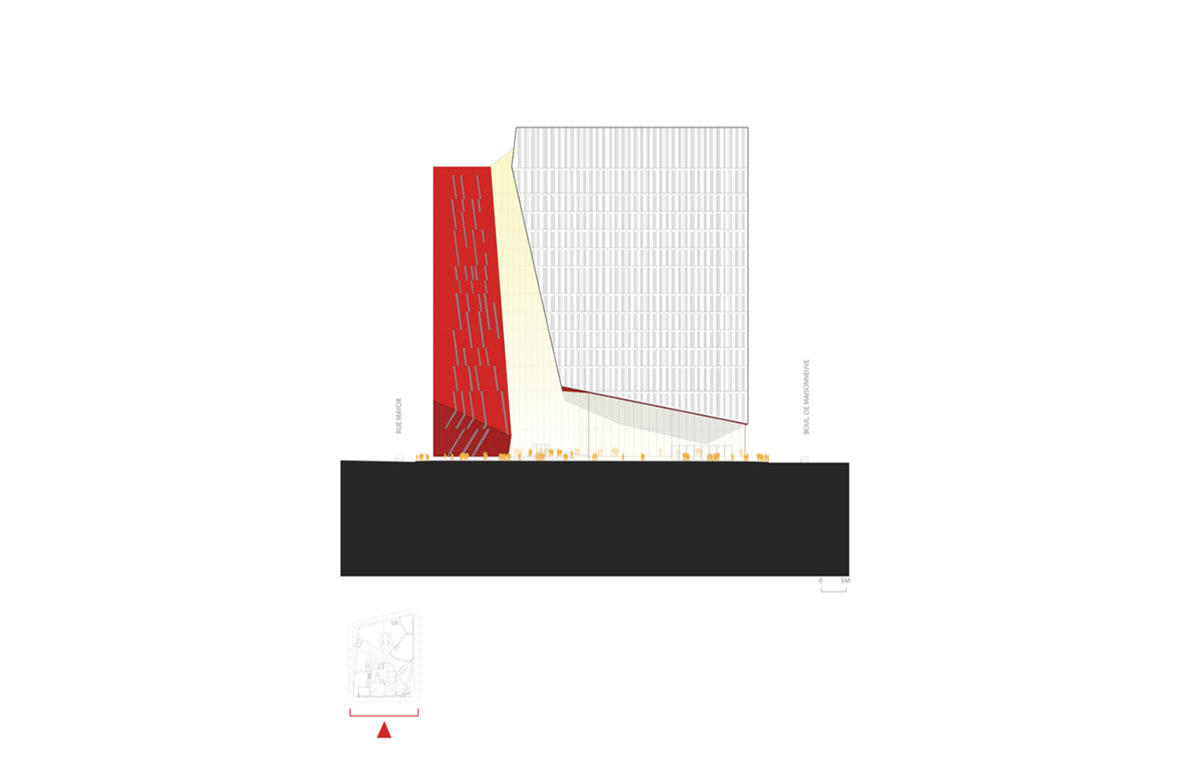 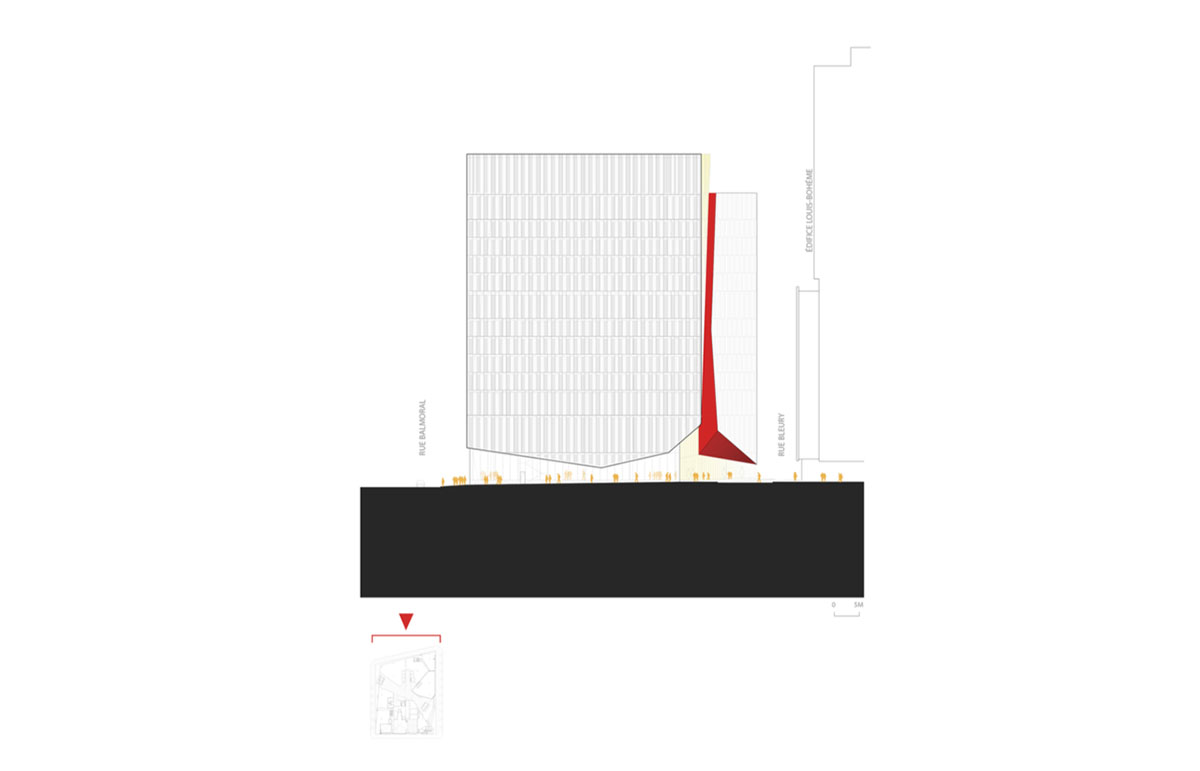 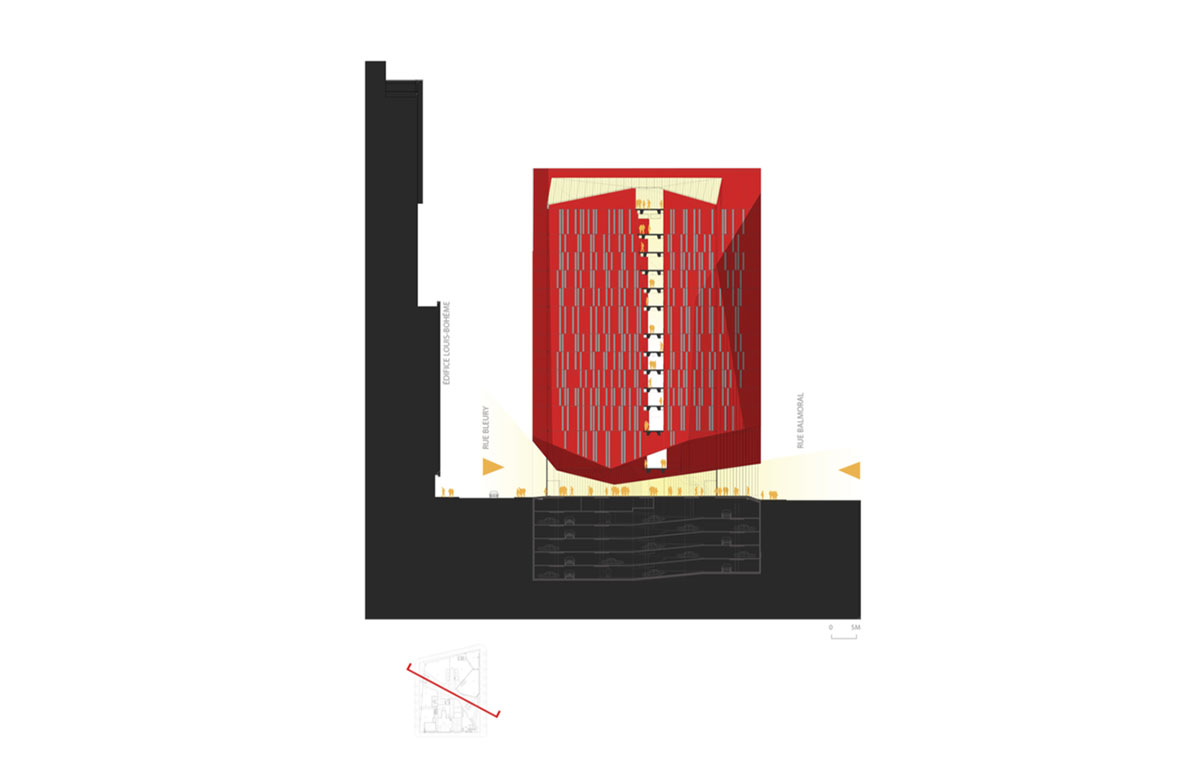 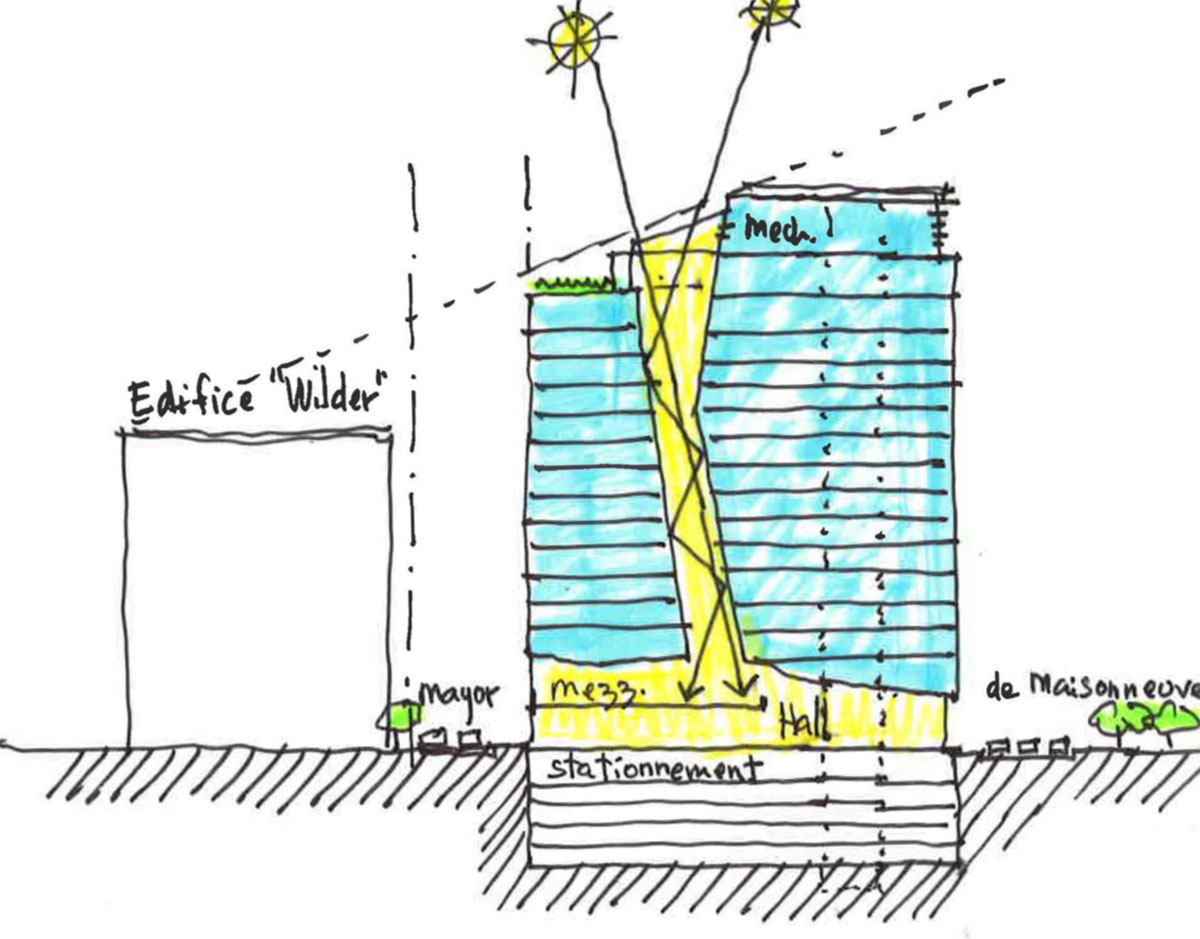 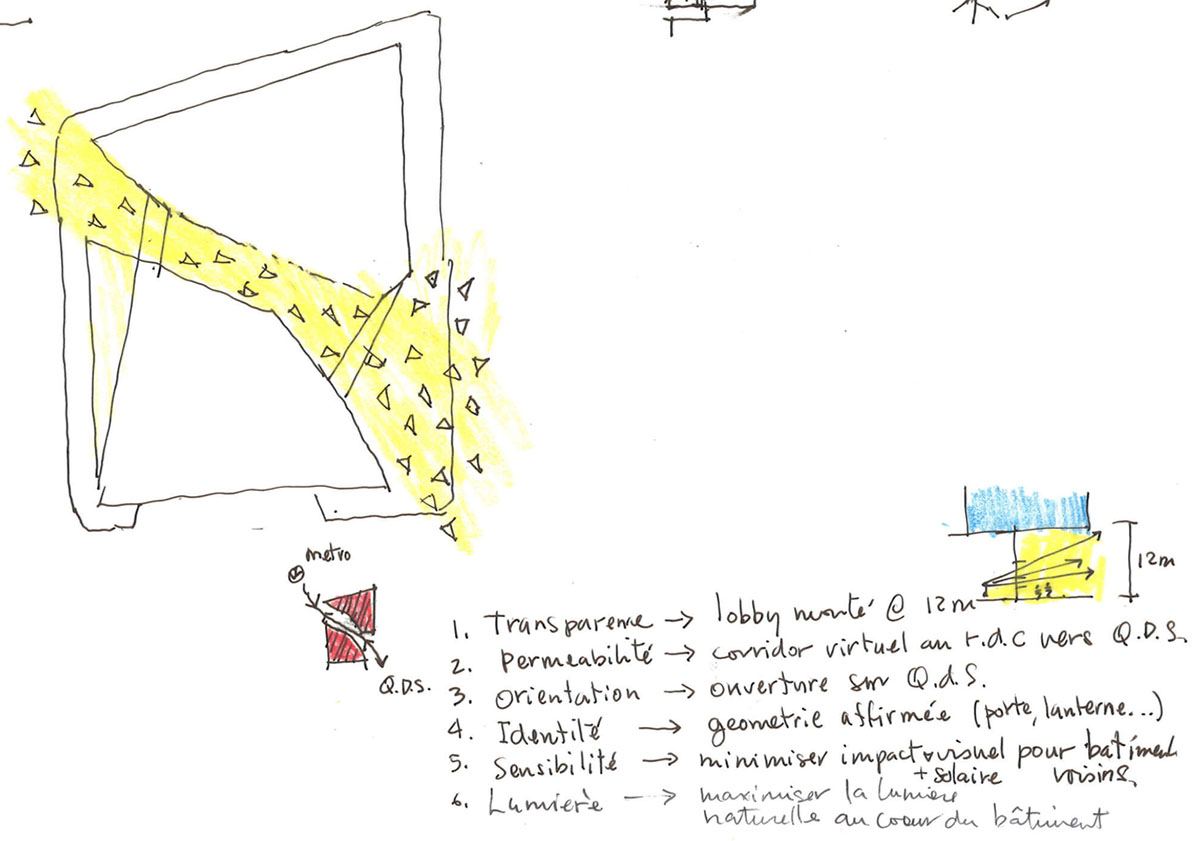