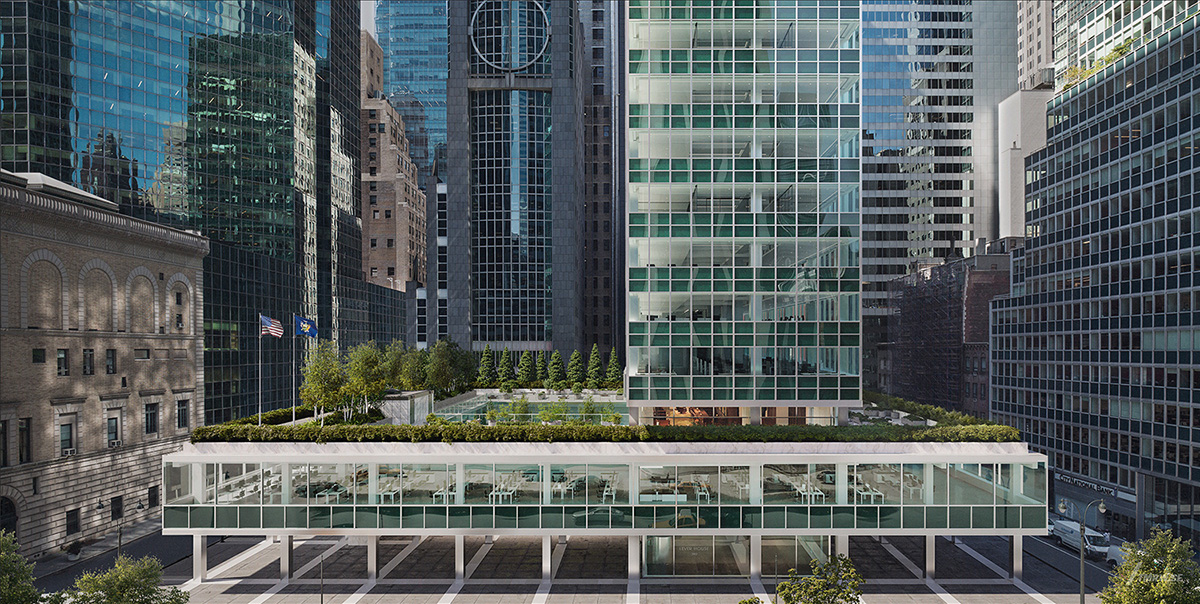 Lever House was designed by Natalie de Blois and Gordon Bunshaft of SOM in 1952, and the 22-storey tower was recognized one of the first modernist landmarks built with glass curtain wall - becoming a rare example of the International Style architectural movement in the United States.

Lever House was given a landmark status by city's Landmarks Preservation Commission in 1982.

Now, 70 years after, SOM is returning to its iconic tower to revitalize its original elements "that are showing their age and need restoration", while adding high-performance materials to its façade.

In 2001, SOM revisited the building to completely restore the tower's facade. SOM noticed that "the curtainwall had been so far ahead of its time when constructed that its mullions had corroded, causing adjacent glass panes to crack and necessitating a new, high-performance facade with materials that were identical in appearance to the original, midcentury metal and glass."

In addition, the team added that many materials and elements at the ground floor and third level terrace were damaged or deteriorating, while inside the tower. Mechanical systems that are original to the building were needed to be redesigned, according to SOM.

"Such stewardship of a single building, by one firm over a seven-decade period, is a rarity in the architectural profession," said SOM.

With this restoration project, SOM is revitalizing the primary public and private spaces to their original glory, and improving key infrastructural components that will "significantly improve the building’s energy performance."

In the plaza, SOM will upgrade the existing nonoriginal paving, currently in poor condition, and will be fully replaced by a durable, cast-in- place concrete matching the design of Lever House’s original paving. The paving includes a series of dark gray surfaces separated by a grid of light gray stripes, which follow the rhythm of the building’s stainless steel columns.

Since the tower consists of the water- damaged plaster ceiling, which carries from the outdoor plaza into the lobby, it will be replaced in kind with new, higher performing plaster.

The building's original stainless steel-clad columns scattered throughout the site,  – which have been damaged over time – will be restored and refinished.

SOM will also re-polish and clean the long black limestone wall – which acts as a backdrop to both the plaza and lobby. In the meantime, the white marble, which encloses stair towers within both the plaza and the lobby, will be reset, honed, and repaired.

Inside, the lobby’s original terrazzo floor will be repaired and refinished. "Together with the new exterior paving, this will create a renewed sense of continuity from the outdoor space as tenants and visitors transition to the interior," SOM added.

All around the lobby, SOM is implementing a plethora of updates. Within the lobby’s enclosure, stainless steel mullions will be refurbished and cracked glass will be replaced. 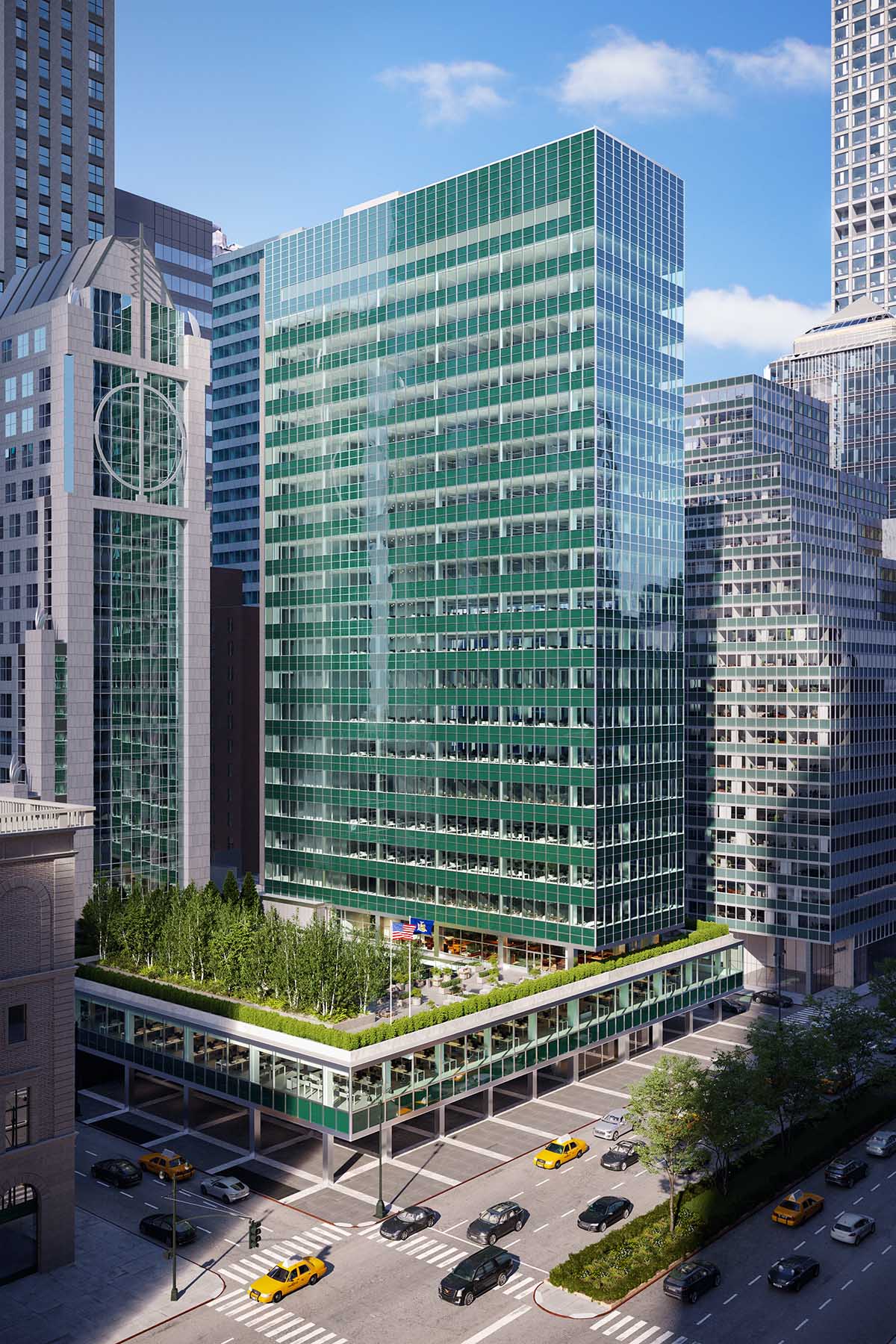 A glass mosaic tile wall in the elevator vestibule will be cleaned and repaired, while the luminous ceiling above will feature an upgraded, diffused lighting system to improve brightness and energy efficiency.

"The cumulative effect of all these efforts, while subtle, will transform the arrival experience at the building and create a place that is both renewed and reminiscent of the landmark’s appearance in 1952," SOM explained.

SOM will also add two alterations in the black limestone wall. Currently, staff from the restaurant on site must walk through the office lobby to reach outdoor seating located in the plaza. To improve functionality, the team is proposing two new openings in the limestone wall that will create direct connections – significantly enhancing circulation throughout Lever House’s ground level.

The restoration will continue on the higher floors, as well as a adding a new landscaping. "From the plaza and lobby-level planter to the third-floor terrace, Lever House’s landscaping – most of which has changed over the years," according to SOM, and it will be visually united with new birch trees throughout.

"The white barks of these new trees will create a beautiful composition against the black limestone wall, and harmonize with new paving on the 13,000-square- foot, third-floor terrace," it said.

The current, non-original red paving will be replaced with a more durable surface. A new, gray precast concrete paver, with dimensions that recall the size and shape of the original paving, will be more complimentary in color to the building’s blue-green glass. At the perimeter of the terrace, landscaping will be replaced with new shrubs, flowers, and perennials to frame views of Park Avenue.

Moving to the office floors inside, by incorporating a series of sweeping changes to the mechanical systems, they will contribute to new LEED Gold and WELL Platinum certification targets.

"Right now, Lever House is still using its original induction units, a 70-year-old system," the studio added. SOM is taking out all these units, which will add floor space along the walls and allow ceiling heights to rise from nine to 10 feet without affecting the appearance of the curtain wall from outside.

This new mechanical equipment, along with a 500-kilowatt generator, improved security systems, and modernized elevators, will maintain the landmark’s place as a Class A office space for decades to come.

The restoration of the project is expected to be completed in 2023. Once complete, Lever House’s renovation and restoration is set to "become a primary example of the potential of improving our existing buildings."

"As our midcentury built environment continue to age, projects like this will become far more important – making SOM’s work on Lever House a precedent for extending the life, vitality, and sustainability of a landmark in light of a changing climate," the firm added.