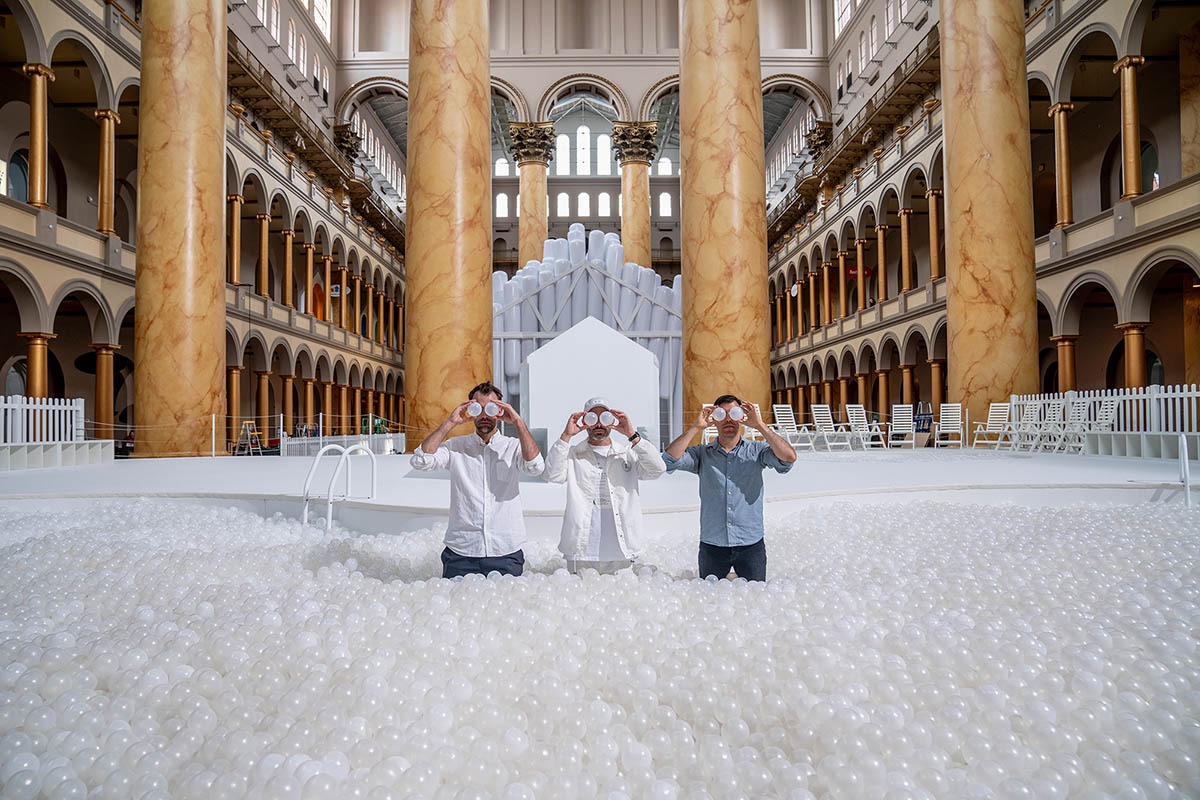 New York-based collaborative design practice Snarkitecture has opened its new exhibition at the historic Great Hall of the National Building Museum in Washington, the interactive exhibition, titled as Fun House, has opened to the public on July 4 and will be on view till September 3, 2018 to provide a playful environment for the visitors.

Titled Fun House, it is the latest in the Museum’s imaginative Summer Block Partyseries of temporary structures inside its historic Great Hall, the exhibition will be complemented by a full schedule of programs and special events, starting from July 6, 2018 to August 29, 2018. 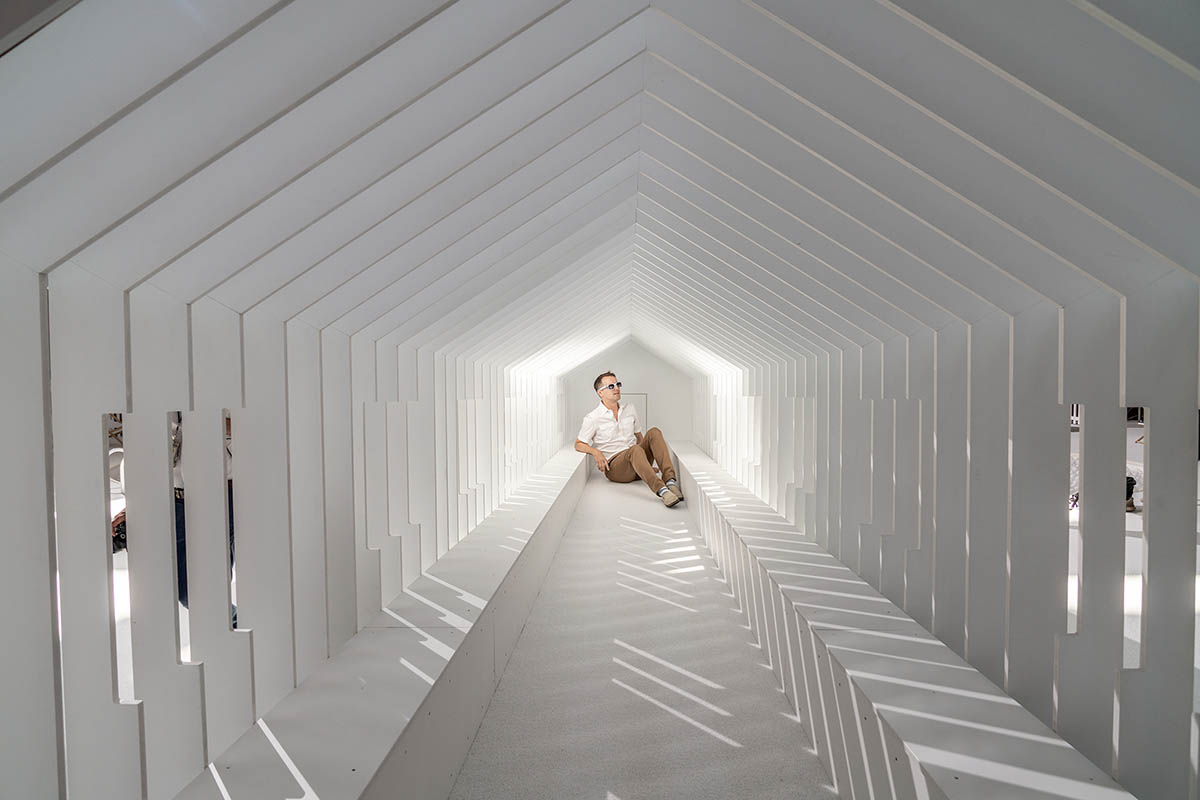 Fun House is Snarkitecture’s first comprehensive museum exhibition, examining the prolific activities of the studio throughout the entirety of the Great Hall.

The playful exhibition, curated by Italy-based Maria Cristina Didero, is presented within a Snarkitecture-designed house—a freestanding structure that recalls and re-imagines the idea of the traditional home. 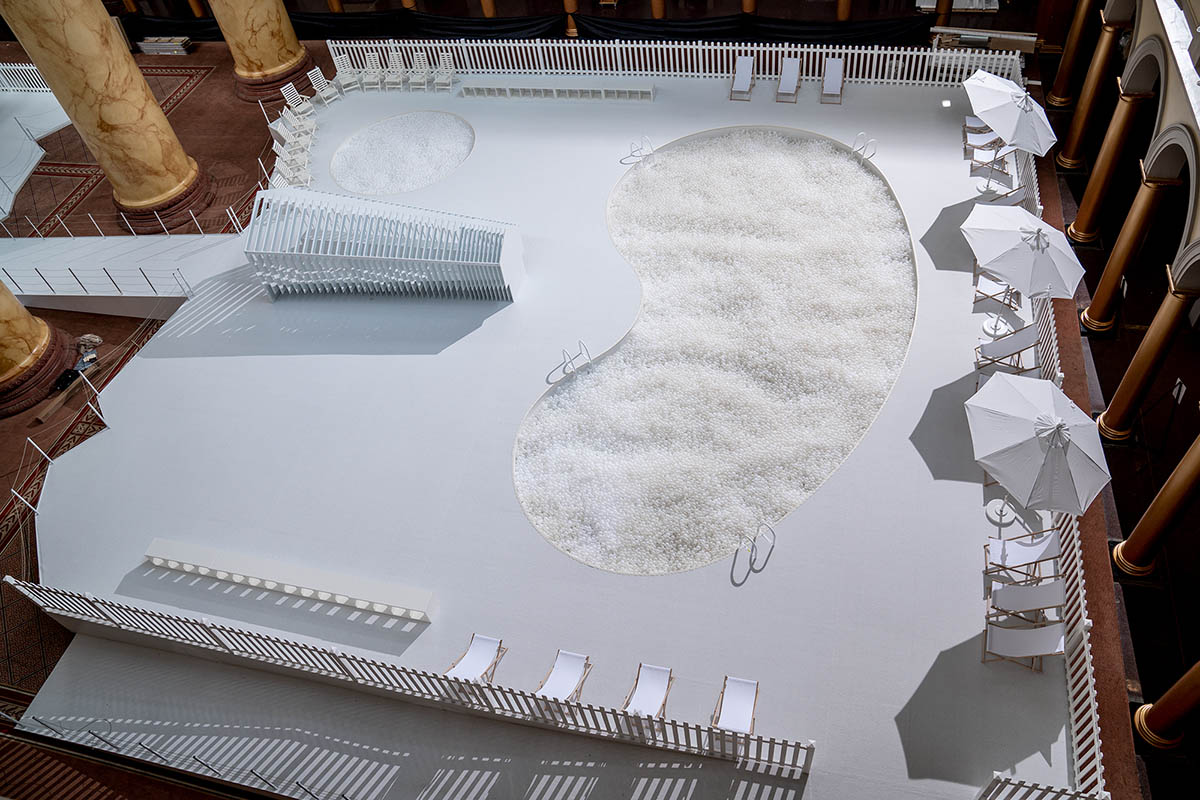 Fun House is comprised of a sequence of interactive rooms featuring well-known Snarkitecture environments and objects, like Dig (2011) and Drift (2012), as well as new concepts developed for the Museum. As visitors walk through the house, the rooms convey the ten year story of Snarkitecture whileunderlining the studio’s peculiar, yet accessible way of reinterpreting the built environment. 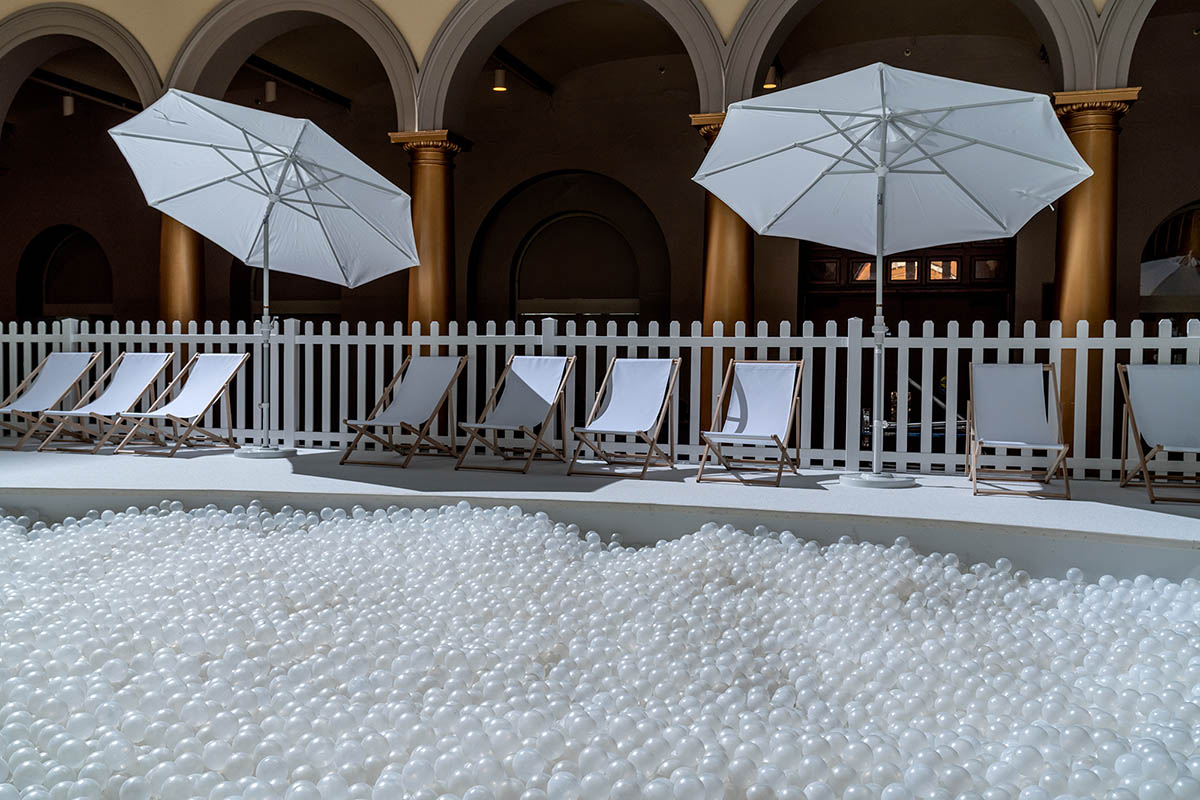 In the Museum’s west court, or “front yard,” a custom recreation of A Memorial Bowing (2012), welcomes visitorsinto the space. Visitors exit the house towards the east court, or “backyard,” greeted by Playhouse (2017) and a kidney-shaped pool filled with hundreds of thousands of recyclable plastic balls, reminiscent of The Beach (2015-17).

"Besides its symbolic value, the house stands for the basic icon in the field of architecture," said Didero, curator of the exhibition. 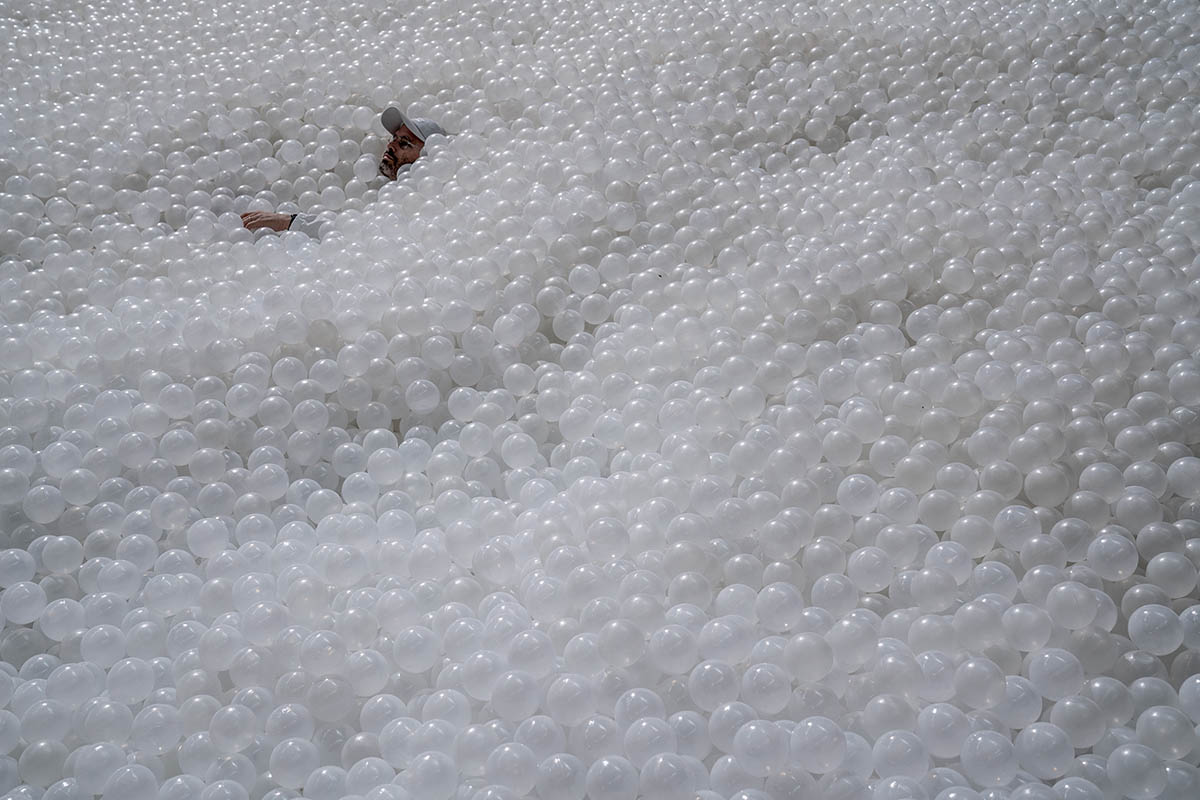 "A simple and evocative concept, a house is the first thing most children learn to draw spontaneously, adding a triangle to a rectangular shape. In the occasion of Fun House, starting from the aforementioned simple outline, the conventional household is regarded and totally re-imagined to contextualize the unconventional theoretical journey of Snarkitecture’ s first decade of activities," added Didero. 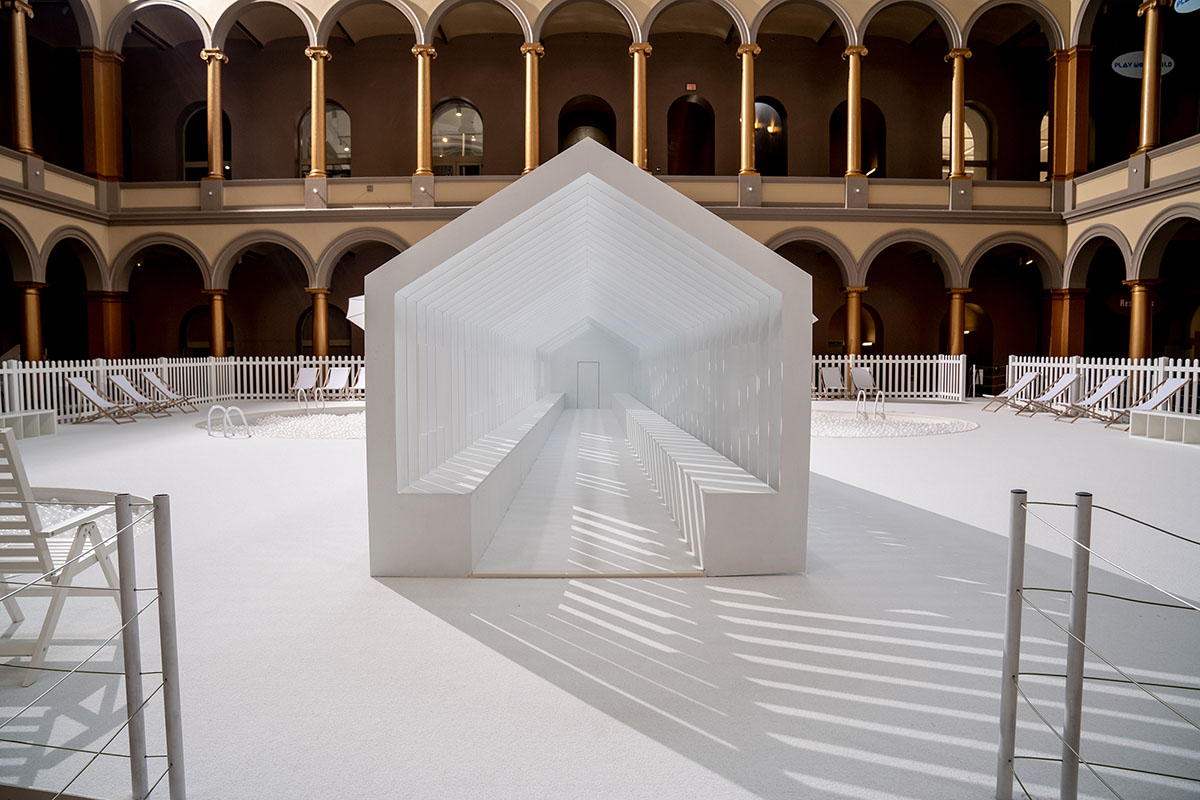 "Fun House represents a unique opportunity for us to bring together a number of different Snarkitecture-designed interiors, installations, and objects into a single, immersive experience," said Alex Mustonen, co-founder of Snarkitecture.

"Our practice aims to create moments that make architecture accessible and engaging to a wide, diverse audience. With that in mind, we are excited to invite all visitors to the National Building Museum to an exhibition and installation that we hope is both unexpected and memorable." 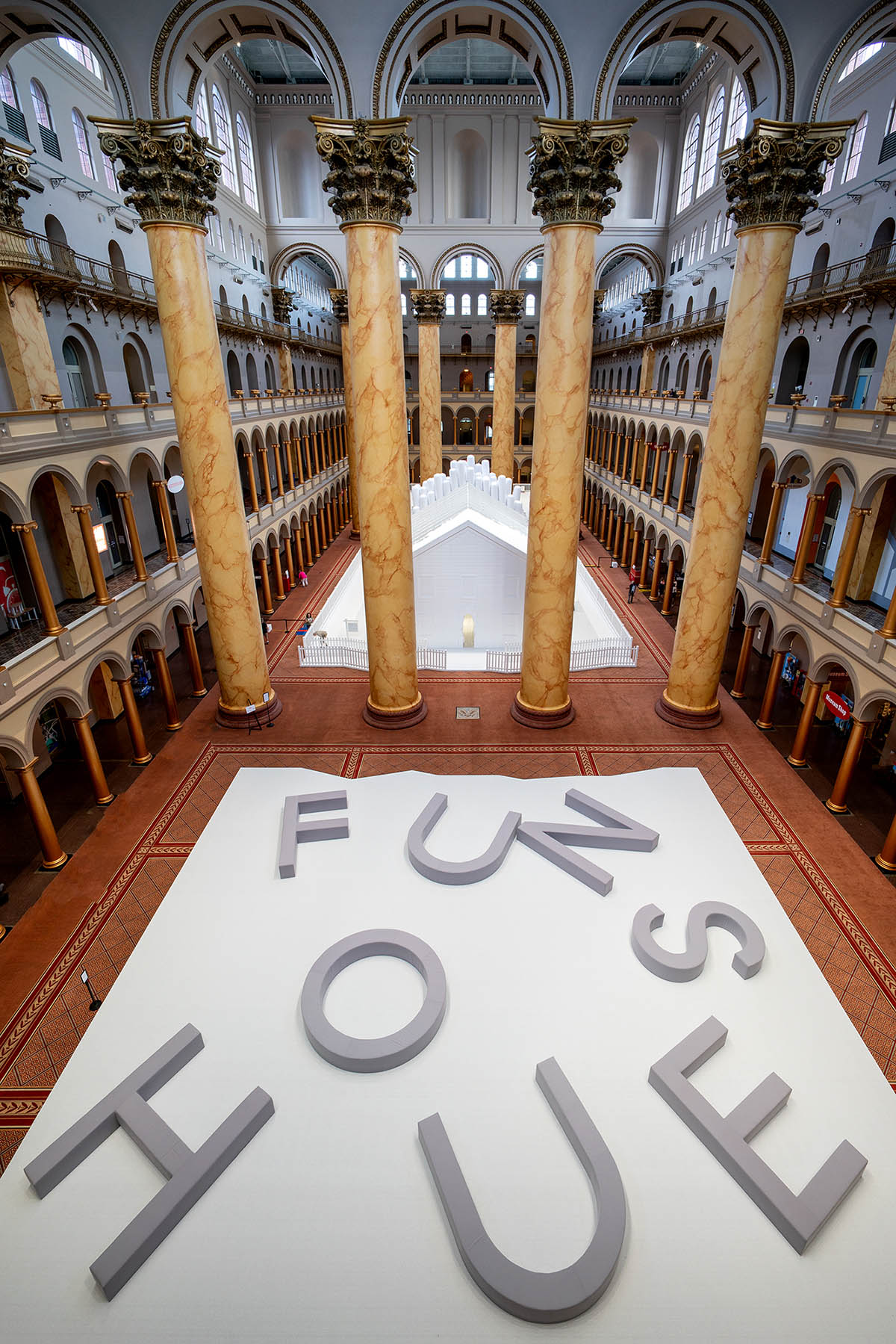 Sanrkitecture was founded in 2008 by Alex Mustonen and Daniel Arsham, and joined by partner Benjamin Porto in 2014, Snarkitecture is a New York- based collaborative practice operating between art and architecture. 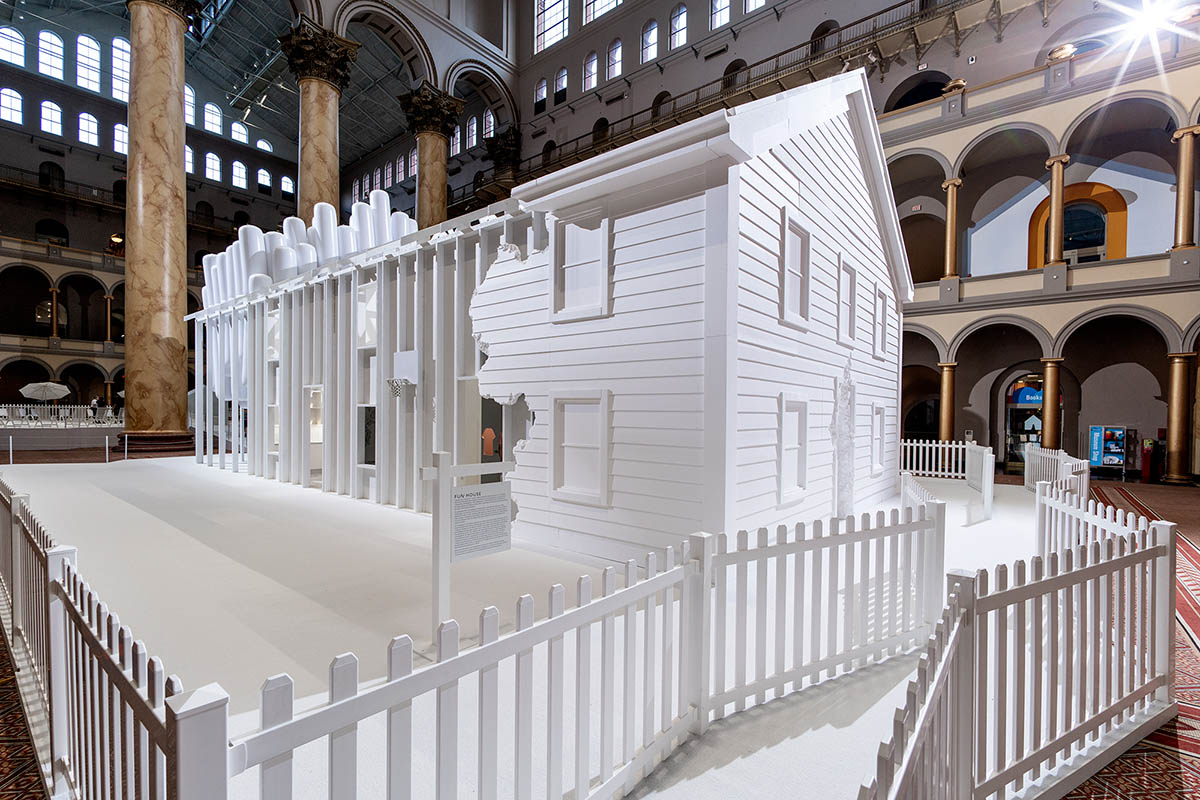 The studio is best known for their playful approach to material and the reinterpretation of everyday objects and environments—from the raw, yet refined interiors of various Kith and COS stores to immersive installations at Salone del Mobile, the New Museum, Design Miami, and more—the studio’s tenth anniversary represents an opportune time to explore past work in a brand new format. 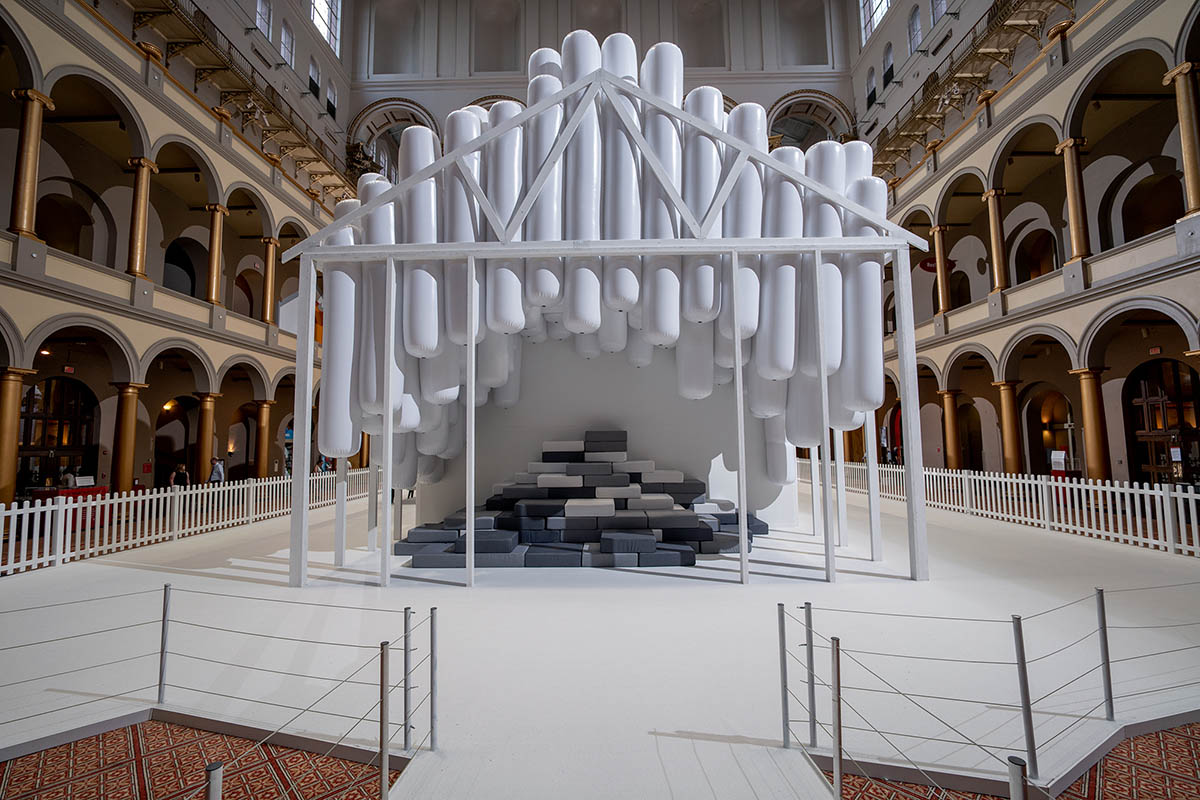 Fun House is the latest collaboration between the National Building Museum and Snarkitecture. In 2015, Snarkitecture created The Beach, which covered 10,000 square feet of the Great Hall with nearly one million recyclable translucent plastic balls.

The Beach welcomed over 180,000 visitors over the span of eight weeks and remains one of the most popular National Building Museum exhibitions to date. 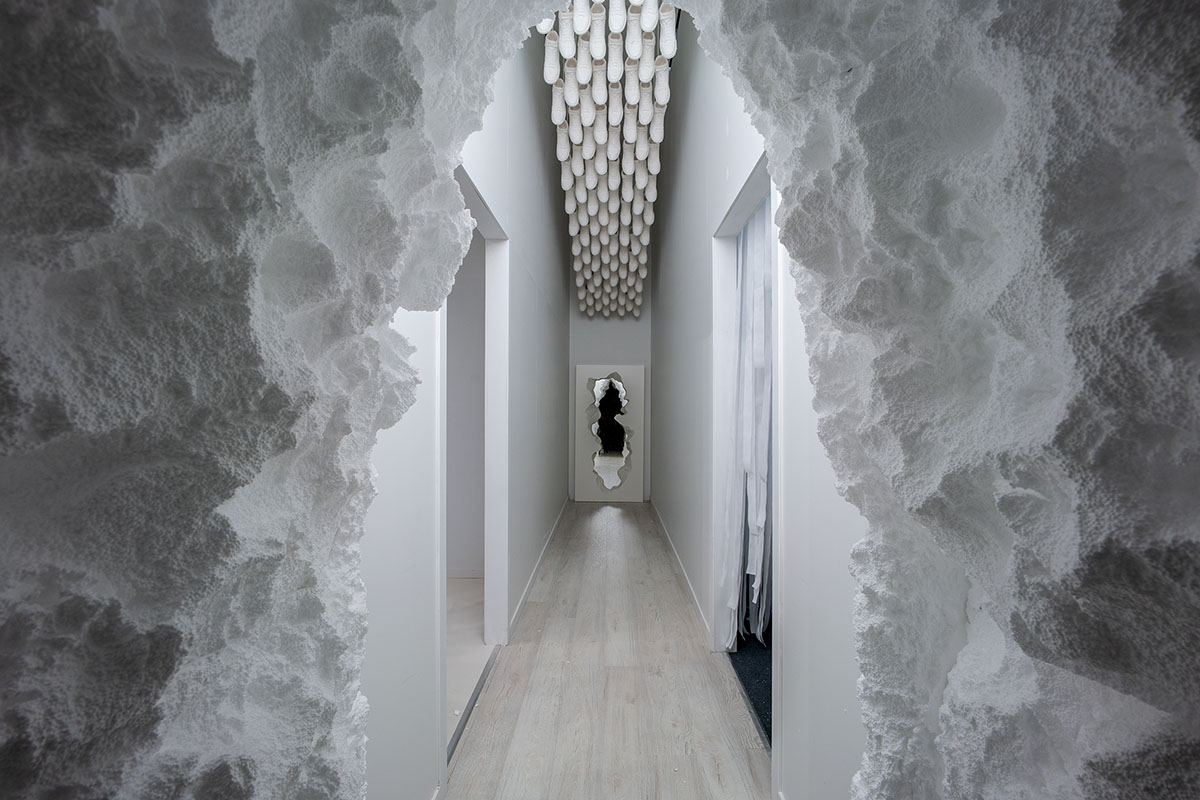 "We are thrilled to welcome Snarkitecture back to the Museum," said Chase Rynd, executive director of the National Building Museum. "We knew they would be up to the challenge of designing something that will inspire curiosity about the world we design and build—and, for the first time, take up the entirety of the Great Hall." 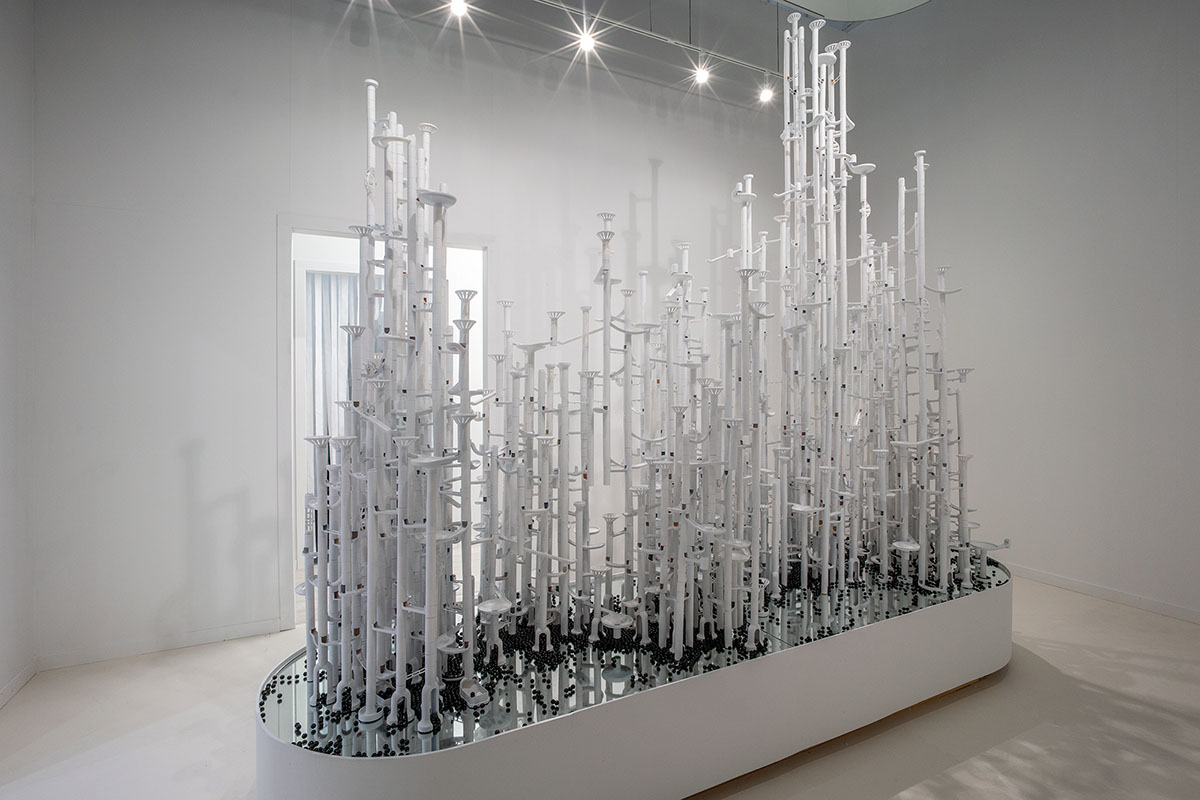 Fun House is part of the Museum’s Summer Block Party, an annual series of installations and events for visitors of all ages. In previous Summer Block Party exhibitions, Hive by Studio Gang (2017), Icebergs by James Corner Field Operations (2016), The Beach by Snarkitecture (2015), and the BIG Maze by the Bjarke Ingels Group (2014) are among the architects who presented their works at the historic Great Hall. 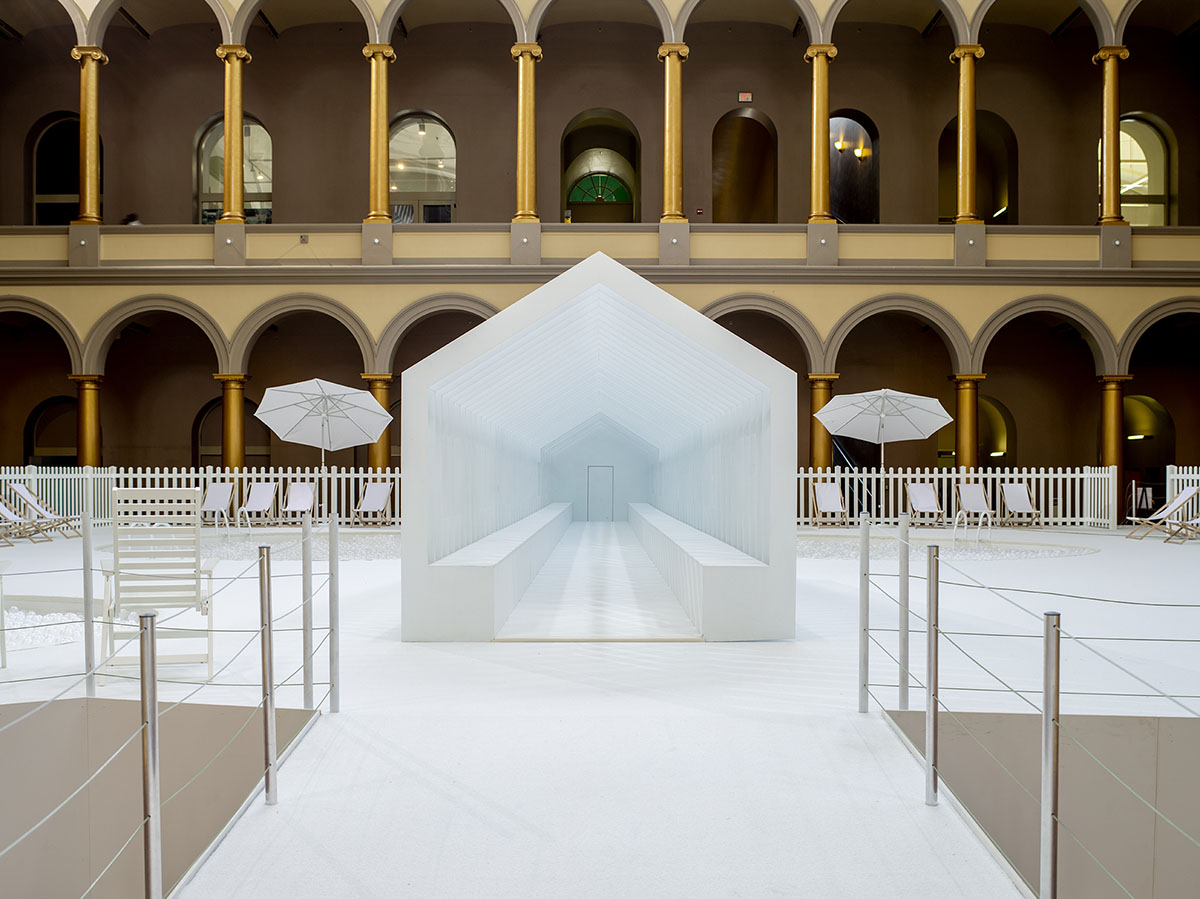