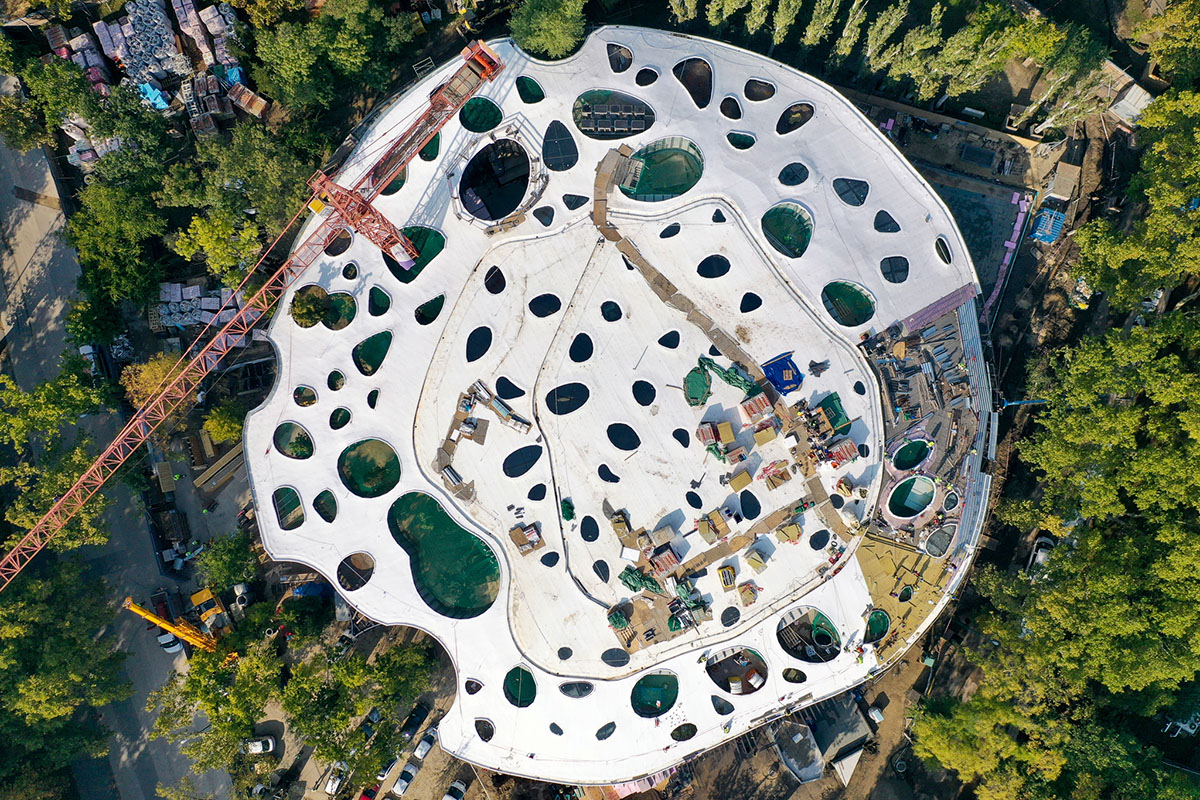 New photographs have been revealed for the House of Hungarian Music in Budapest, Hungary designed by Japanese architect Sou Fujimoto, the project is developed as part of the Liget Budapest Project, Europe’s largest urban cultural development programme.

The House of Hungarian Music has been listed in WAC's 10 Hotly-Anticipated Buildings Set To Be Completed In 2021 list and the new detailed photographs show that the exoskeleton of the building is complete and it is anticipated to open its doors to the public at the end of 2021.

The building is situated in a pastoral setting in Budapest's largest park beside Városliget Lake, near Heroes' Square, one of Budapest’s most important attractions, on the site of a formerly demolished office block.

The 3,000-square-metre organic building with its transparent glass walls, undulating roof structure, canopy with holes will be in harmony with the nature. 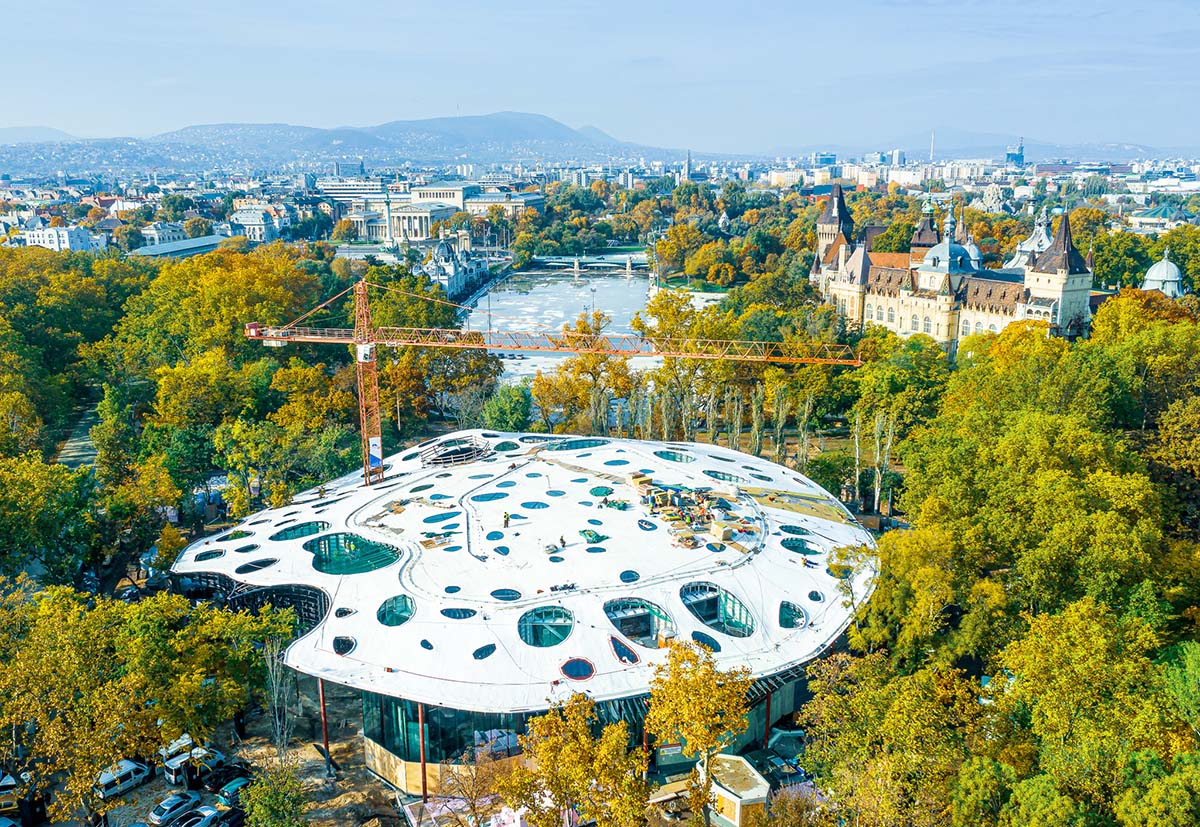 Once complete, the new music venue will operate as the world’s first facility of complex musical initiation bringing countless musical experiences to visitors through its wide range of events: interactive exhibitions on musical history, concerts and exciting music education workshops.

The key feature of the design is its floating roof, the roof was inspired by "the visual representation of the vibration of sound: the wave."

In the spirit of openness and transparency, Fujimoto designed the side walls of the building to be made of glass and the perforated structure of the roof articulated by lightwells to let light into the interior of the building much like the foliage of trees.

Fujimoto also took inspiration from the famed Secessionist building of the Liszt Academy in Budapest and, not least, by the internationally renowned tradition of Hungarian music and music education. Sou Fujimoto's design for the House of Hungarian Music was selected in an anonymous competition from among 168 projects in 2014 as part of the Liget Budapest Project, Europe’s most significant cultural development - which combines Hungary’s largest-scale park and landscape architecture project with the development of institutions not seen on a scale since the days of the millennium.

"It is incredibly inspiring to work in one of the world’s first public parks, and the task of designing the building was especially exciting since we not only created an edifice but also brought the park experience into the building," said Sou Fujimoto about his vision.

"The Liget Budapest Project, and within it the House of Hungarian Music, are a truly emblematic development project, which might serve as an example for future urban developers since it managed to create exceptional harmony between the green and the built-up environments," he added. 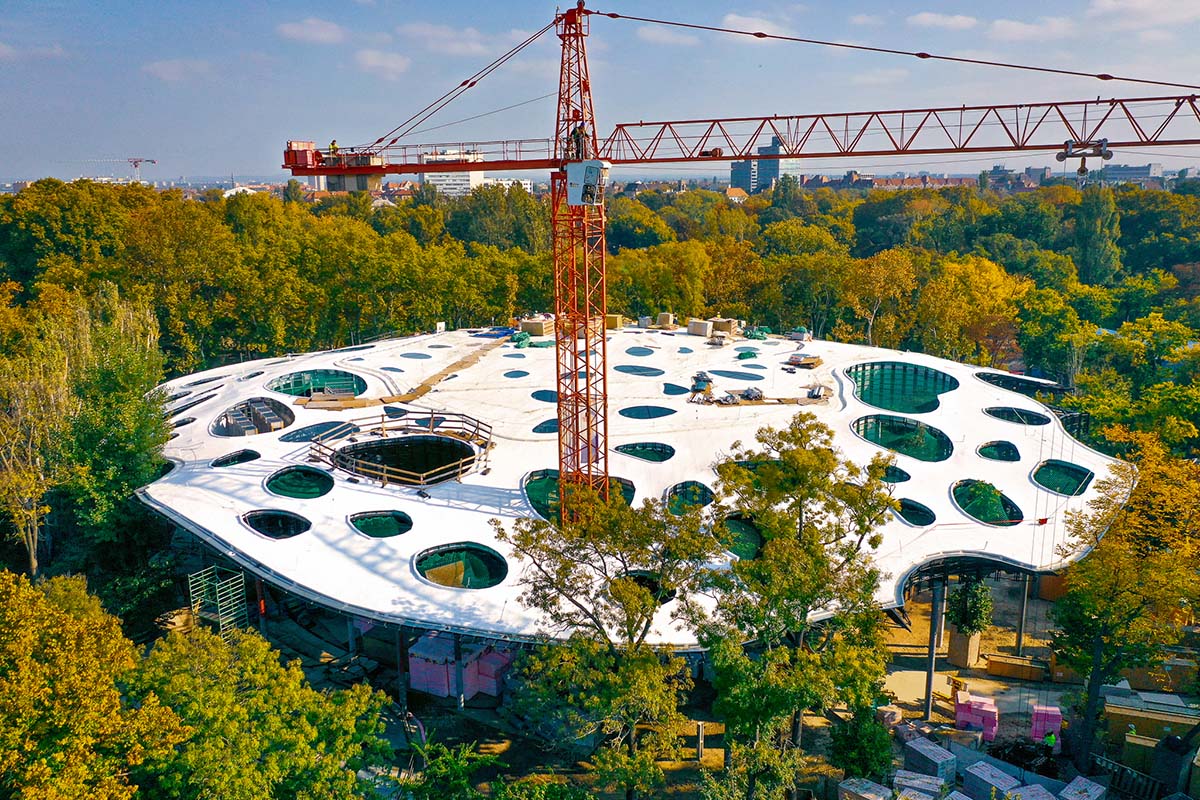 The House of Hungarian Music has unique architectural solutions

"One of the features facilitating the implementation of Fujimoto’s vision is the building’s glass wall, which lends it gracefulness, transparency and individuality," said in a press statement.

"The unique appearance of the House of Hungarian Music is coupled with special engineering solutions: the glass wall of the facade consists of 94 custom-manufactured heat-insulated panels, which are close to 12 metres high in some parts of the building."

The organic roof of the structure marks the building from far away: the design of this floating roof was inspired by the form of soundwaves.

The playfully undulating canopy of varying thickness stays below the level of the foliage, ensuring that the building harmoniously blends in with the environment. 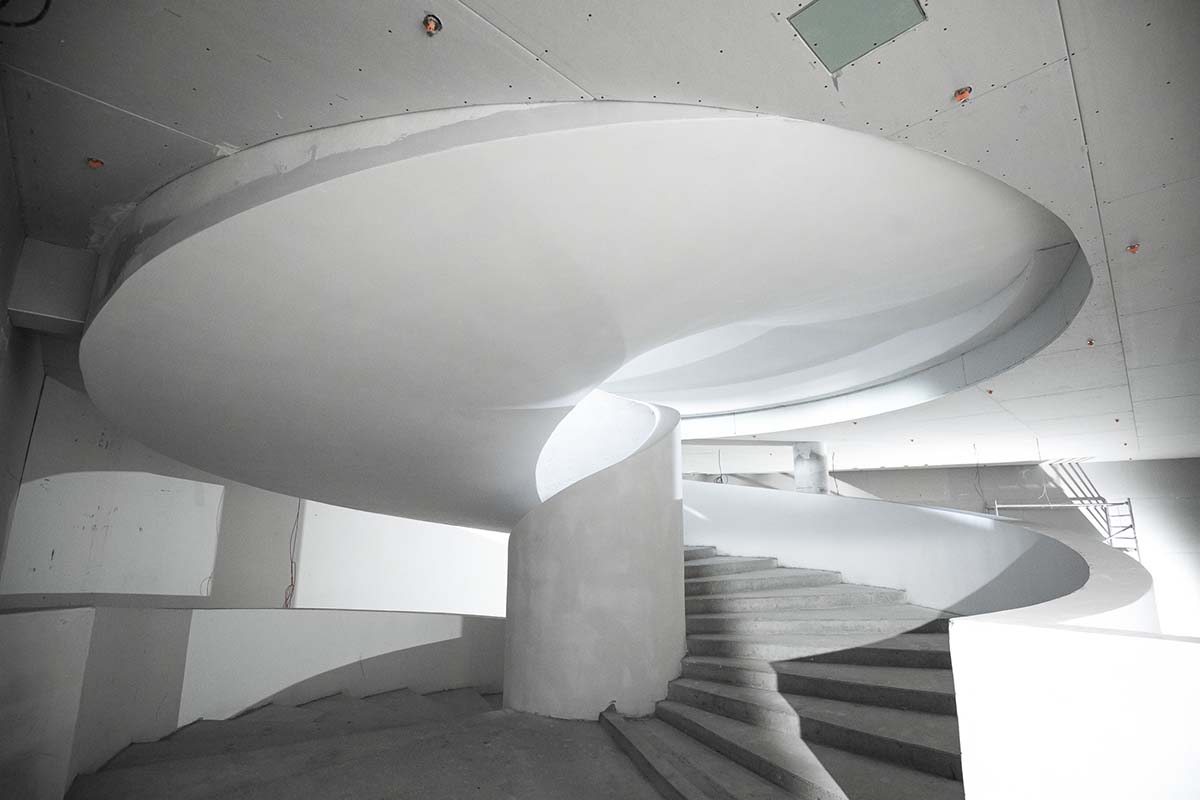 "Underpinning the spectacular and unmistakable sight of the House of Hungarian Music is a host of design and engineering solutions unprecedented in Hungary. There are no right angles in the roof structure, almost no two elements that are the same," continued Sou Fujimoto.

"It is all unique and the surface is punctured by close to 100 individually designed holes for the trees of the park to emerge through; moreover, one of the innovative solutions was also installed in these openings: the lightwells begin here, which channel the light right down to the lowest levels, thus helping to illuminate the interiors and create a unique ambiance." 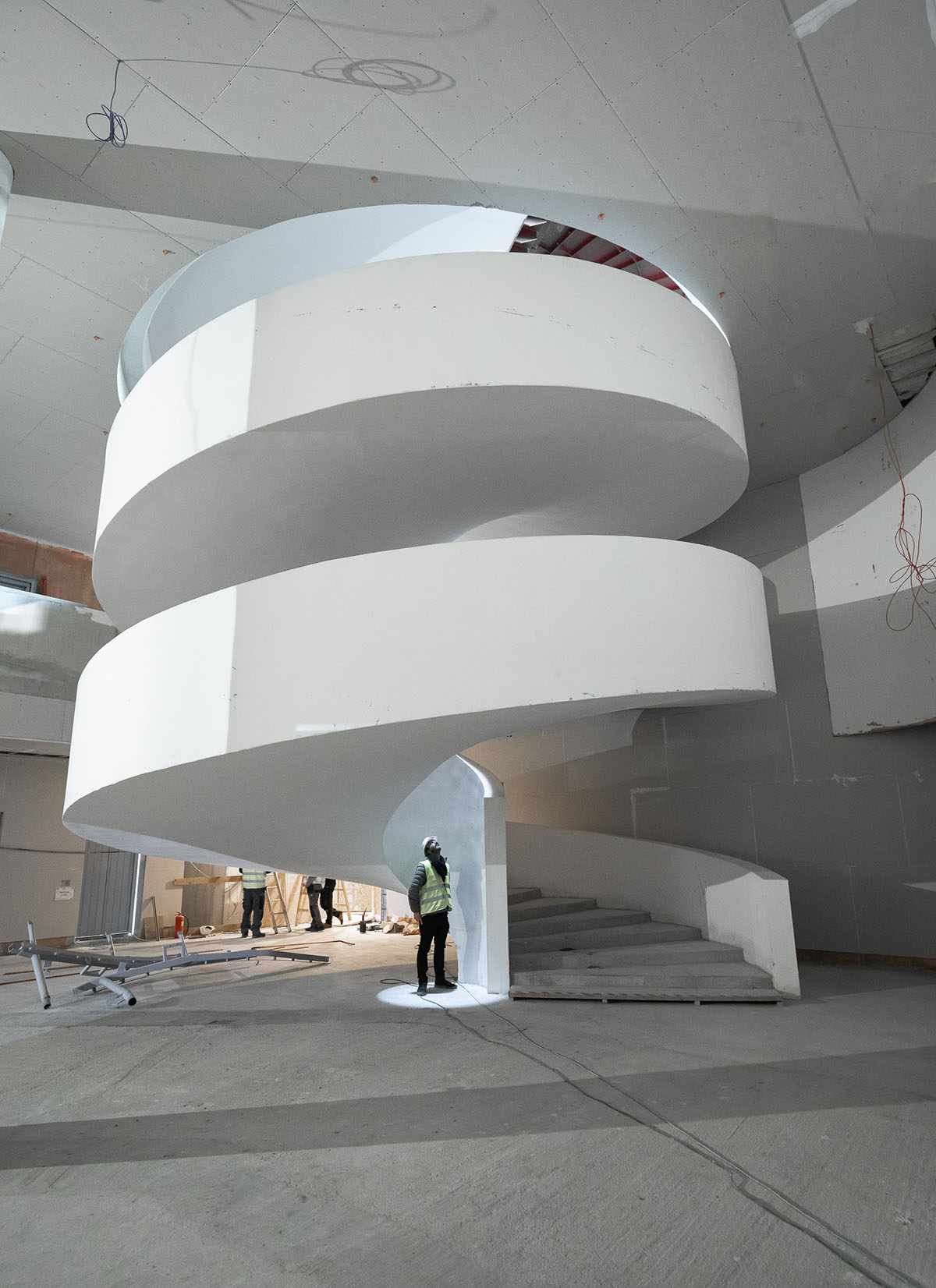 According to a press statement, environmental awareness has been one of the key aspects throughout the construction of the House of Hungarian Music.

"Special emphasis was accorded to renewable energy and the use of special heating and cooling systems already in the planning phase of the project," it said.

"One hundred and twenty heat pumps were installed 100 metres underground in a small area of the City Park, called Nagyrét, next to the building to provide renewable geothermic energy. Another economical and extraordinarily innovative solution is the telecooling system."

The building of the House of Hungarian Music as well as its construction were rated as exemplary from an environmental perspective by BREEAM, the world’s leading international sustainability assessment method. 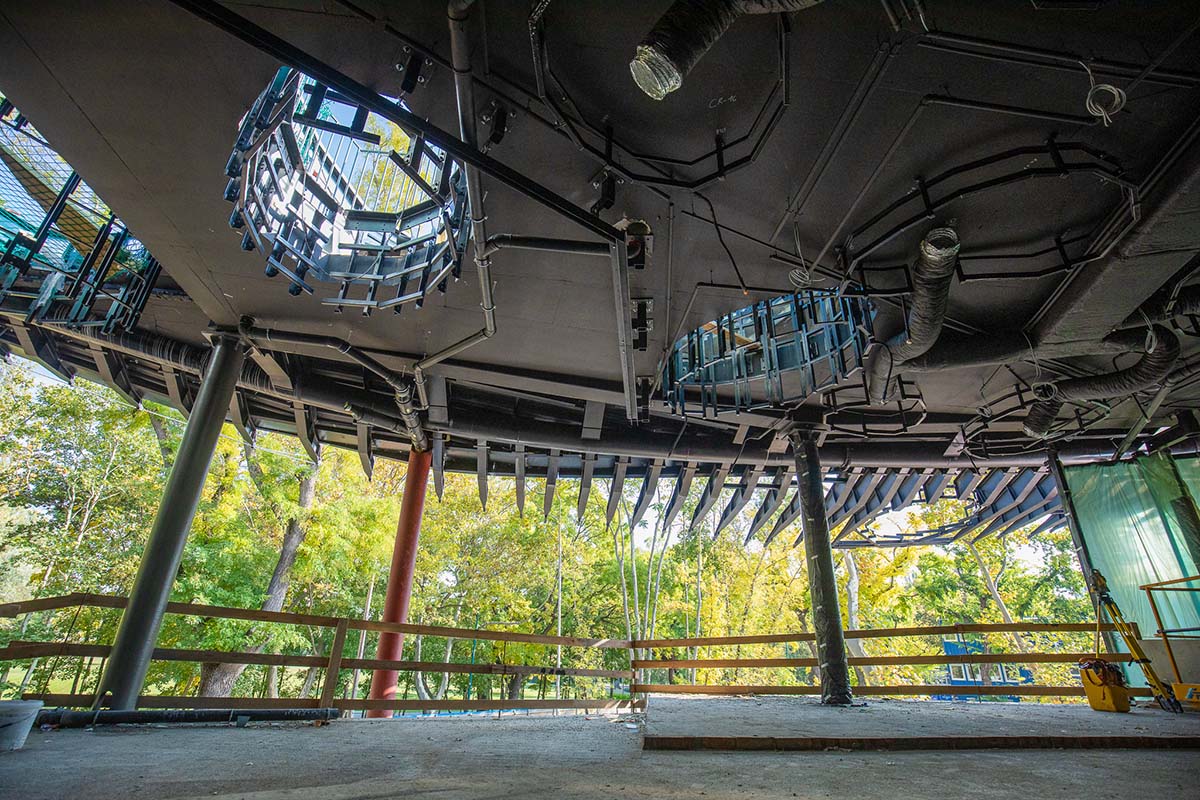 The institution’s complex musical profile and programmes are placed in the three-level layout: the level below ground will be home to exhibitions – permanent and temporary – and a remarkable sound dome.

The park level will house a series of performing arts: live events will be held in the concert halls and the open-air stage alike, while the terrace near the City Park Lake will be a place for recreation.

The above level will house an archive of Hungarian pop music, serving as a source of quiet immersion in music and education, and the workshops to be held in the music education rooms will initiate young visitors into the complex musical experience awaiting them at the exhibitions and performances. 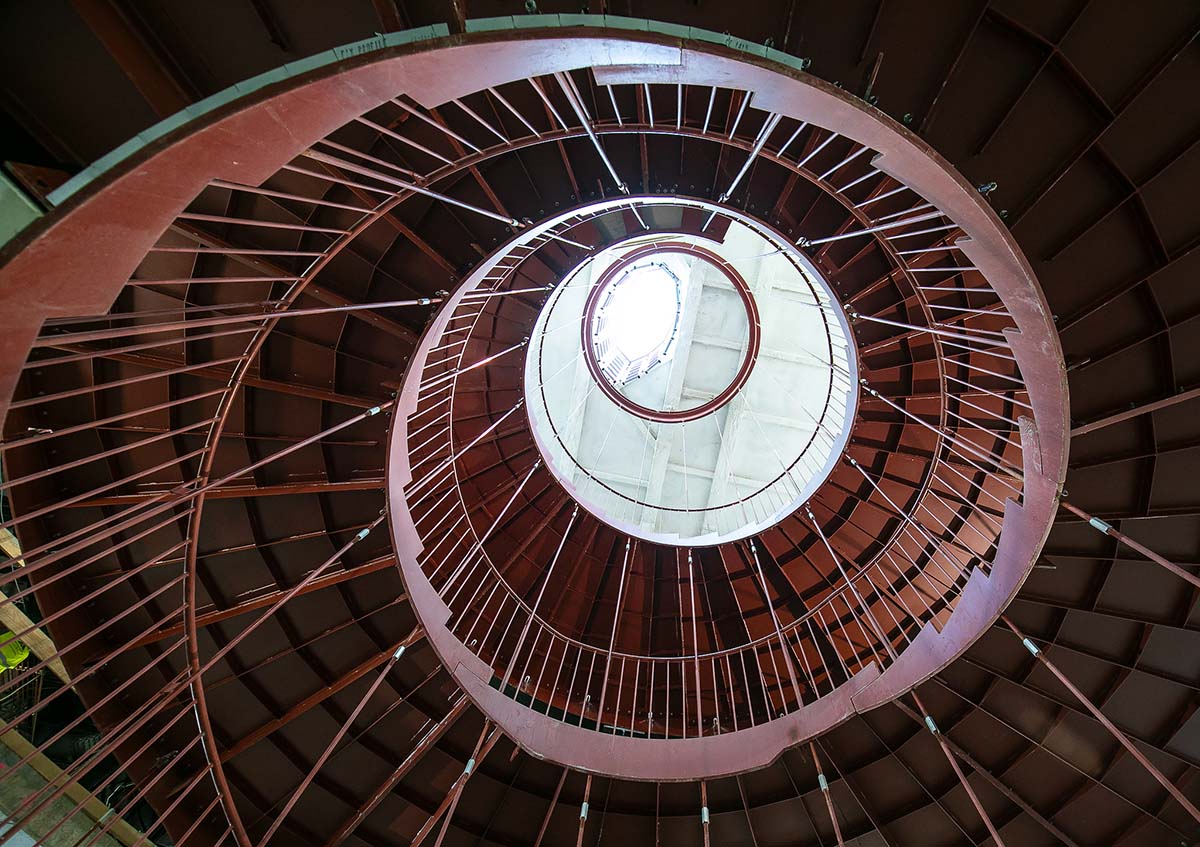 "It will guide visitors through the world of music thanks to a diverse range of events: the underground level of the building will be devoted to exhibitions, including a permanent show on the history of music, which will take visitors along a journey through the development of music using interactive and spectacular technical solutions." 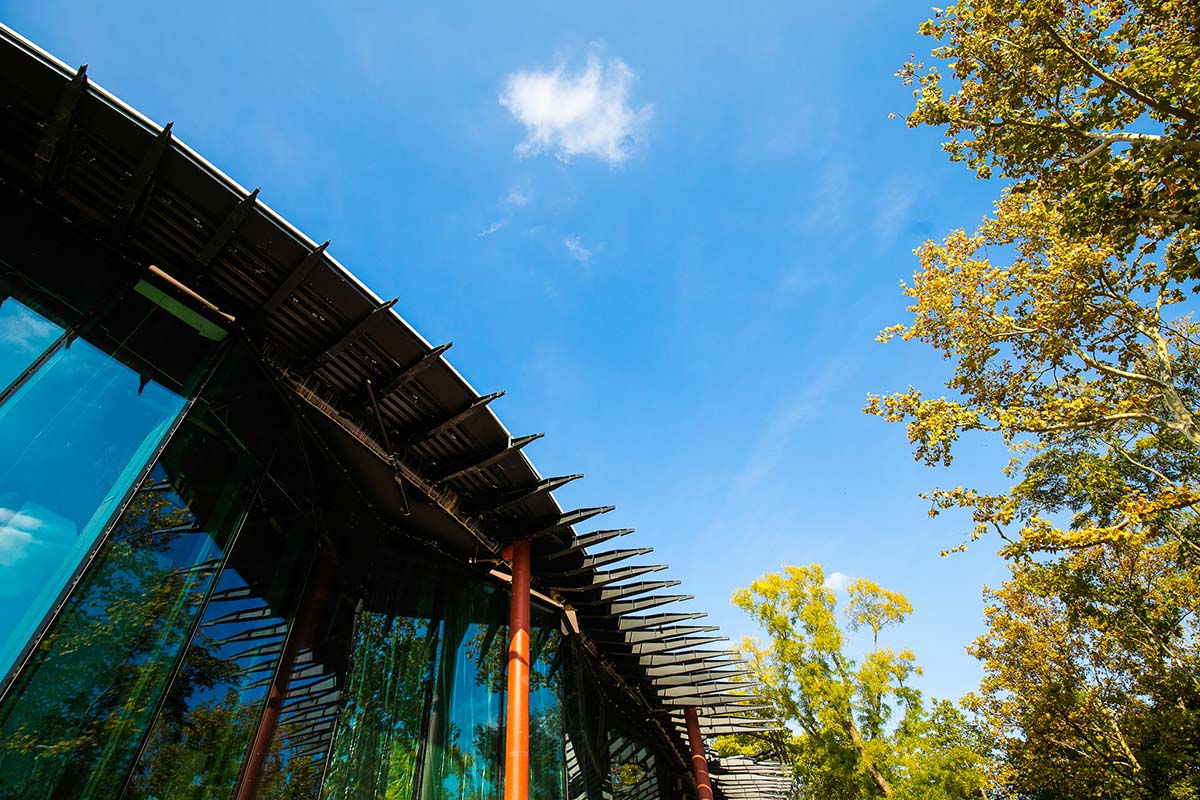 On the level below ground, a memorable experience will be provided not only by the temporary exhibitions but also by the sound dome, a special hemispherical cupola in which diverse ‘sound spaces’ will be created with unique audio and projection technologies.

The ground floor will house concert halls and an open-air stage, where fledgling musical formations will be given an opportunity to show their talent besides established performers.

The first floor will be the venue for music education and a digital library. It will be home to an experience-based information centre with its comprehensive range of events for school groups and groups of children making it indispensable in the education of both classical and popular music.

All images the Liget Budapest

All videos courtesy of Liget Budapest