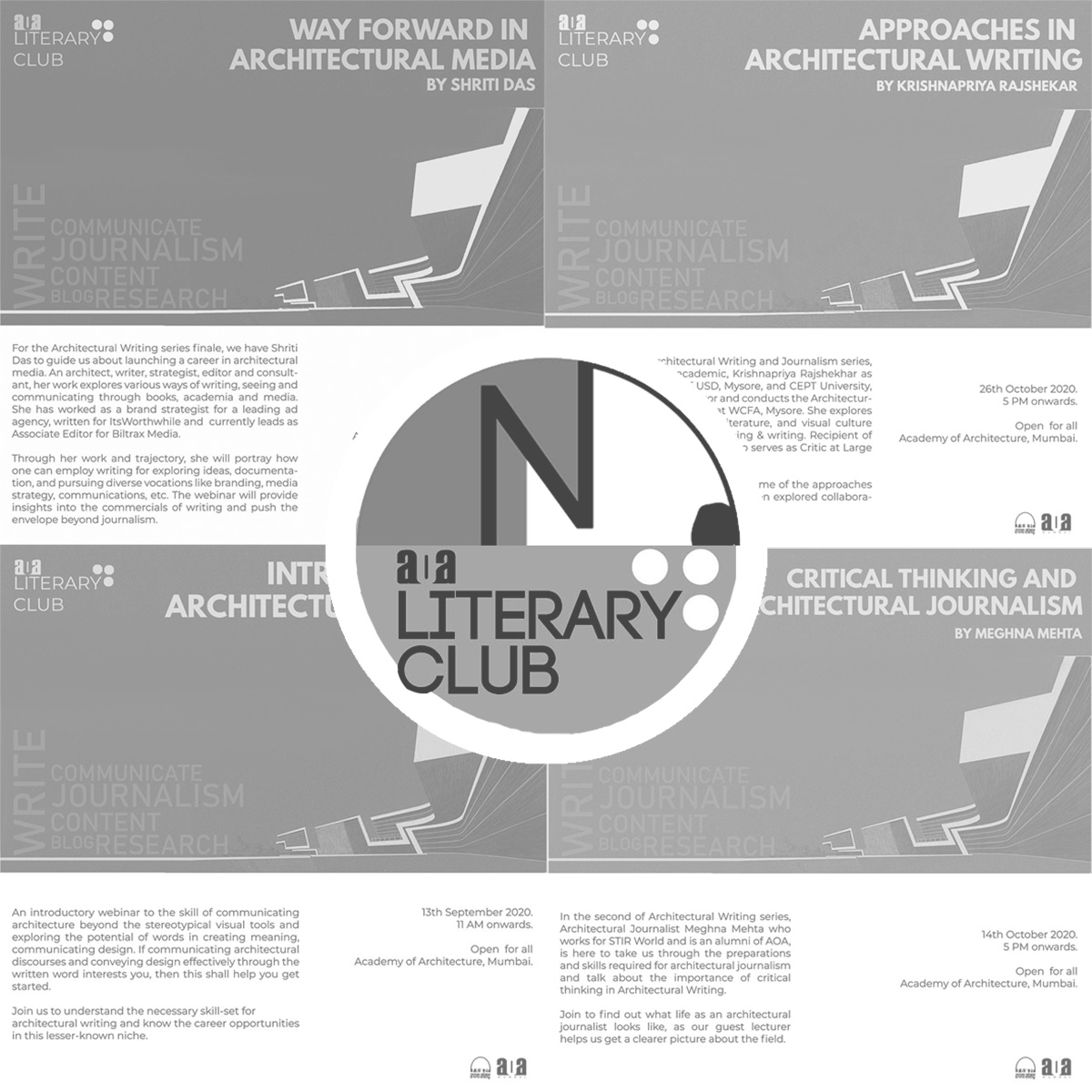 In September and October 2020, the Literary Club (LC) of the Academy of Architecture (AOA), Mumbai, organized a webinar series on “Architectural Journalism and Writing”, with four sessions including presentations by Students and Architects. The sessions were initiated as a discourse to inspire the niche of writing and journalism within architecture.

Devika Biyani, co-ordinator of the LC and final year student at AOA, who has initiated this discourse alongside her LC fellow Chaitanyaa Agrawal of the third year, have now published the entire series online, with four episodes of lectures and discussions. Devika and Chaitanyaa, as a part of the current LC team, are carrying forward the club’s vision of promoting the skill of writing amongst AOA students and creative enthusiasts. As we have seen earlier, the LC builds awareness of intellectual possibilities and joy seen with literary skills, through pop-up activities, competitions and other similar programs.

Episodes and Goals Of The Webinar Series

On the objectives of this webinar series, the LC team said, “To promote a comprehensive understanding and decode the details of the unpopular niche of architectural writing, Literary Club undertook the responsibility of launching discussions around the same within the student community.” On that note, the team has invited writer-architects Meghna Mehta, Krishnapriya Rajshekar and Shriti Das to conduct a session each with insights from their experience in the field of writing and journalism within architecture. 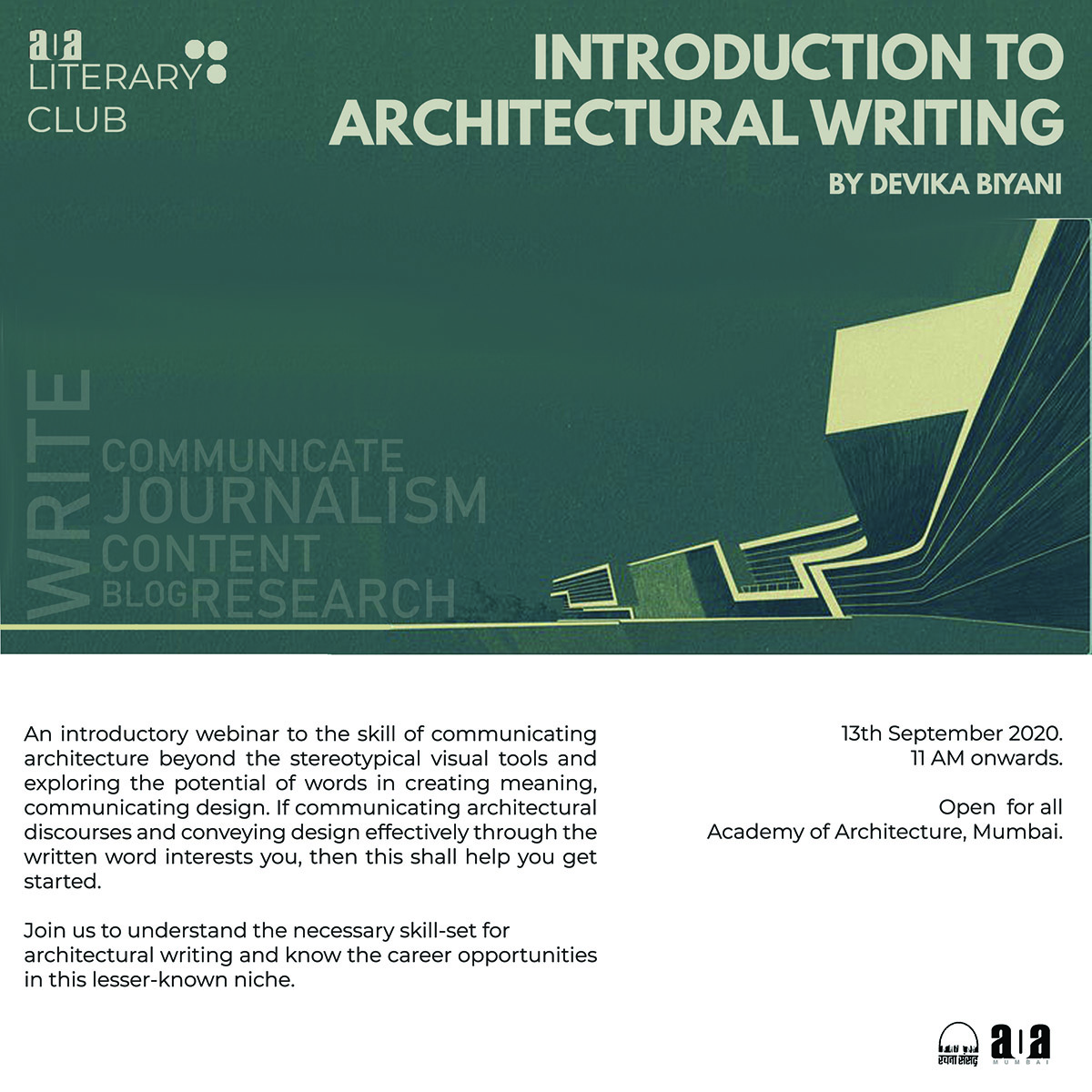 The first webinar on 13th September 2020 is titled “Introduction to Architectural Writing” with Devika as the speaker. She highlighted her academic journey of discovering the skills of writing and reading at undergrad architecture school, in addition to her presentation of learnings and reflections. “Having pursued her inclination towards writing through internships and undertakings in creative, content, and architectural writing, her goal through the session was to deliver an overview of the field and talk about the relevance and importance of writing in architecture”, says the LC team.

"Since the conversation was led by a familiar voice", says the LC team, “the session was cosy and helped students get gradually comfortable with the subject. A question-and-answer session towards the end struck a discussion about the importance of starting early on, internships, and paying more attention to the text students generate in and for their design studios.” 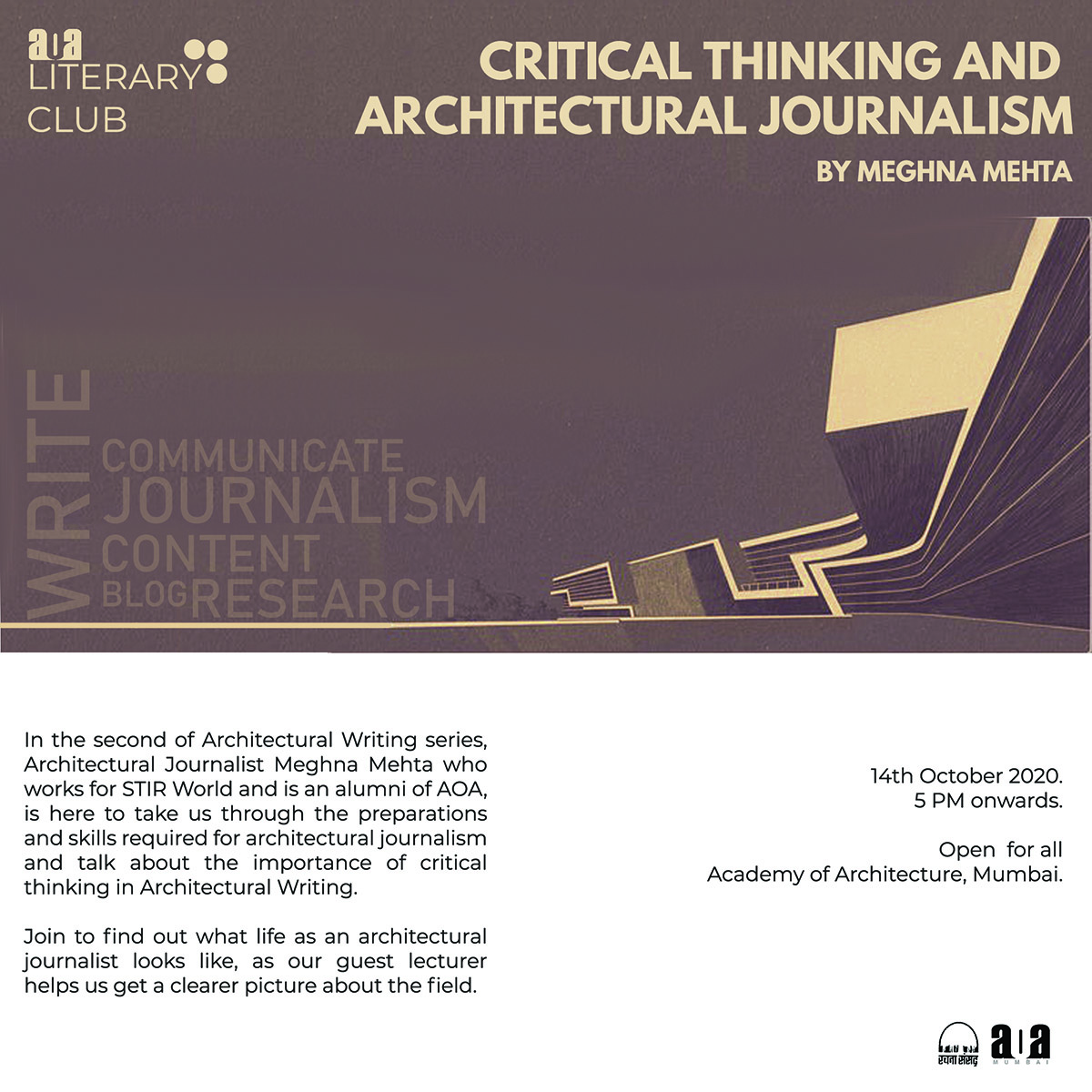 “Through this series of webinars on 'Architectural Writing and Journalism', the intent is to introduce student minds to the sphere of Architectural Writing, familiarize them with the flourishing opportunities, and spur their interest towards considering, experimenting, or pursuing the same for their future goals”, says LC team. “Through elaborate dialogues on several aspects regarding Architectural Writing, we wish to bring clarity and dismantle doubts and strengthen the belief in their choice for those who want to consider writing for professional and personal endeavours”, says the LC team.

With the first webinar, the series eased into the conceptual and technical lectures by the invited speakers. The second webinar by Architect Meghna Mehta, titled “Critical Thinking and Architectural Journalism”, illuminates to the audience the intellectual inquiry involved at comprehending how we perceive the design decisions made in the built environment by various architects. Meghna had inferred these lessons from her research paper on the Acropolis in Athens, which was published by the erstwhile Mondo Arc print magazine (now digitally, Stir World). As a follow-up, Meghna’s presentation asserted how critical thinking and journalism involves observation and collection of architectural work using travel, collaboration, videography and curation of events too. Meghna’s presentation projected a mix of information showing students the different doors that could be opened within a seeming niche area of architectural journalism and writing. 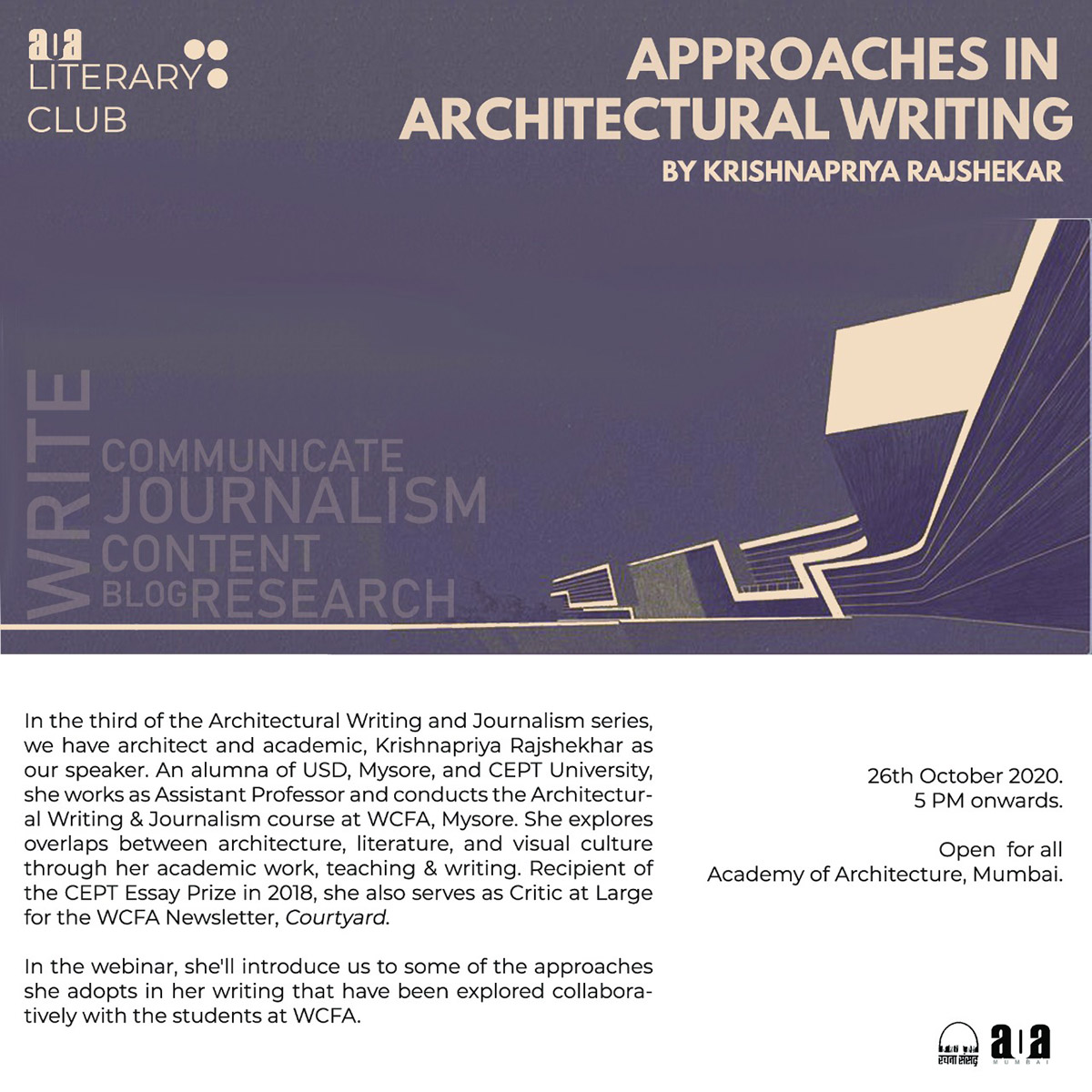 The third webinar presentation is by Architect Krishnapriya Rajshekar. Krishnapriya also works as an Assitant Professor at the Wadiyar Centre For Architecture (WCFA), Mysuru, and leads the Architectural Writing Elective. While Meghna showed the paths in the profession, Krishnapriya shared academic insights about writing and journalism. Krishnapriya presented her knowledge on how writing and reading exist as inseparable literary skills to be equipped by every aspirant. She also shared the methods of discourse followed at WCFA to teach writing to students.

Krishnapriya’s guidance is also the impetus to the collegiate magazine at WCFA called “Courtyard”, alongside more journalistic initiatives like podcasts. Krishnapriya’s presentation will paint the picture of mentally working-out the core skills in architecture journalism-writing and reading. 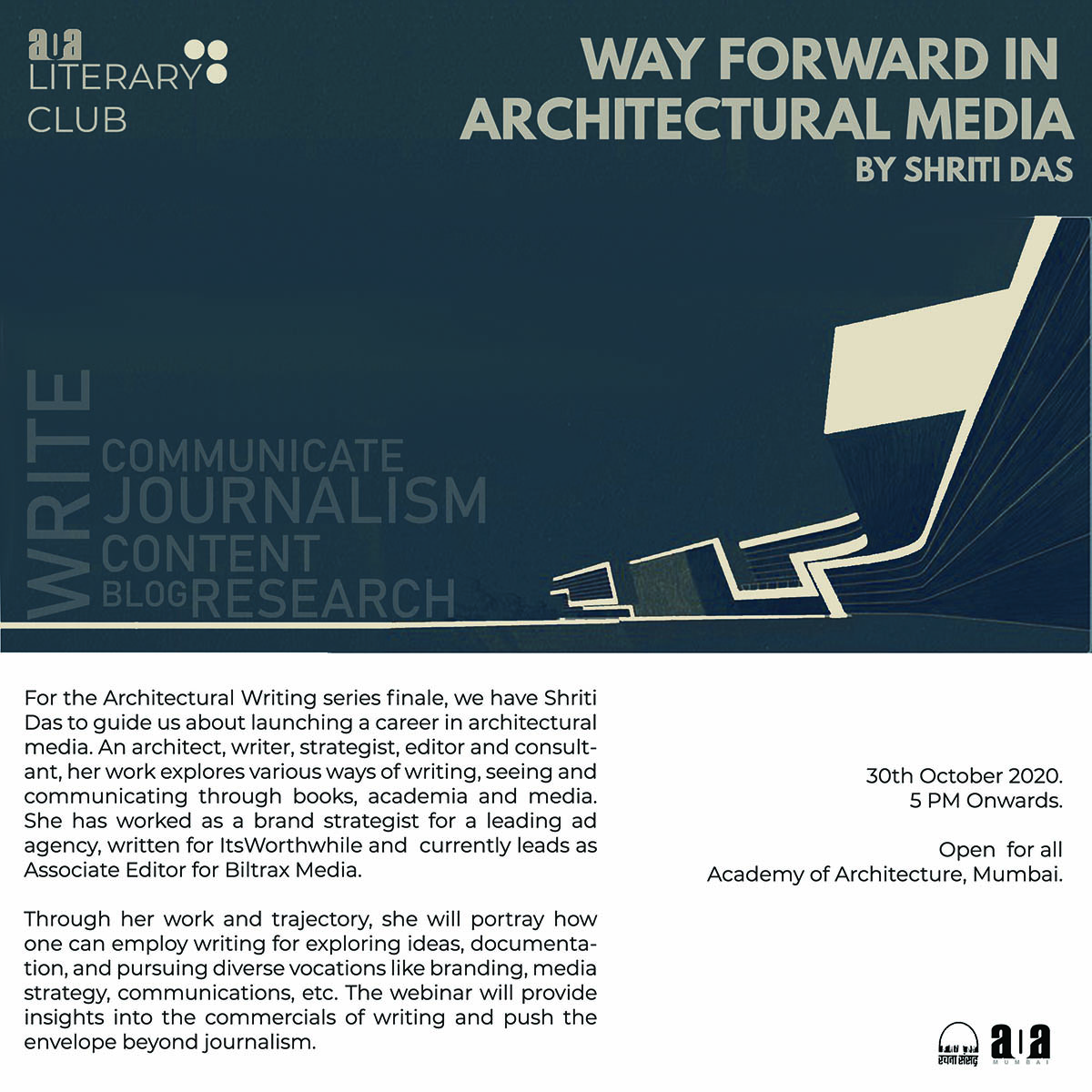 The conclusive and fourth episode in this series was by speaker Architect Shriti Das. Having now spoken of the skills-equipment academically and for the mainstream of the profession, Shriti’s presentation spoke of how architect-writers function independently. She described the multiple of arms of work and literary collaborations under execution in her career, apart from the mainstream media and public relations. More details of the architect and the Shriti’s episode can be found in this publication.

This webinar effort by the LC is backed by the incumbent journalism community within AOA-the “Niche” magazine. “Niche” is a collegiate publication run by a student-team of editors and graphic designers within AOA. “For students at Academy, the niches serve as spots to sit, relax, and unwind in their frantic day. These are the most loved spaces in the college. Hence the name - Niche!”, says the Niche team. Niche is run as seasonal issues having magazines and quarterly newsletters recording the academic and extra-curricular progress of AOA. The magazine encourages students to participate in various events such as cultural weeks, debates, dialogues and the “Confluence’’ exhibition week. The platform is interactive and engages students in conversations and promotes the same.

The Architectural Writing and Journalism webinar series by the LC at AOA was promoted by the Niche Magazine, with event announcements on its Instagram page. Follow the page for more insights about the magazine and AOA’s student activities. Visit AOA’s YouTube channel here to access all the four webinar episodes and more.

All images and videos © of Literary Club, Academy of Architecture.