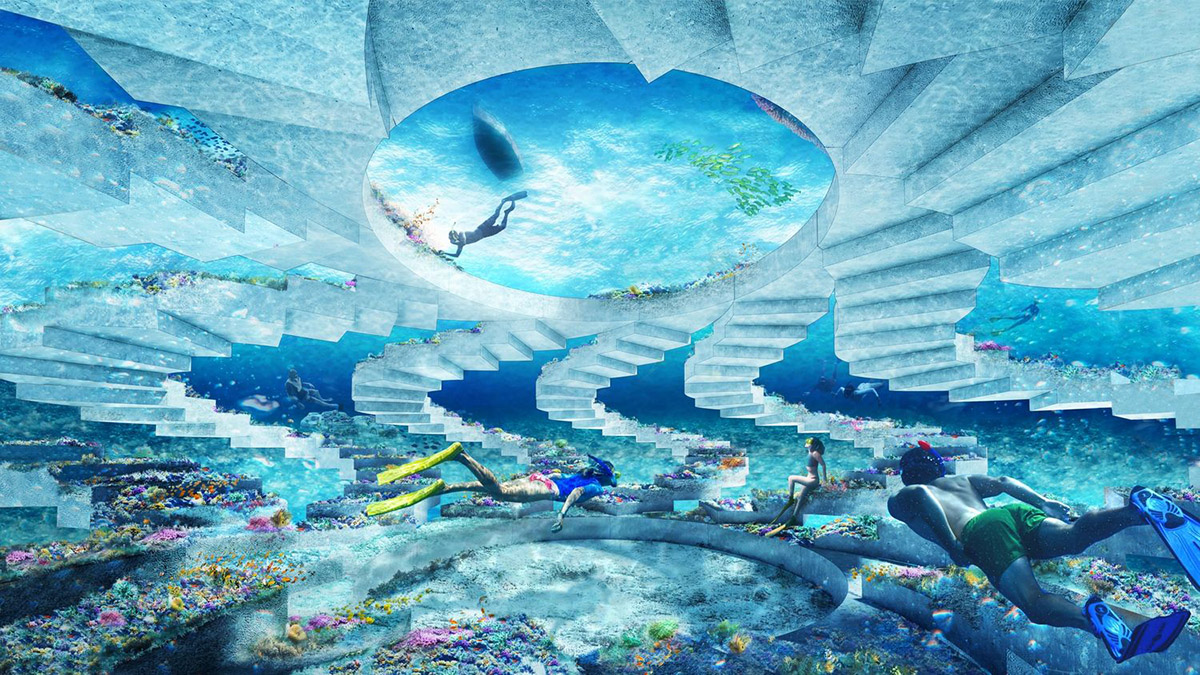 OMA has revealed design for a 7-mile underwater public sculpture park which will be Miami's first underwater sculpture park and artificial reef, aiming to protect and preserve Miami’s marine life and costal resilience.

Taking into consideration climate change, the new park, called The ReefLine, will function as "a large-scale environmental public art project" that raises awareness, and even, respond to the climate change which causes the rise of sea levels and damage of coral reefs in Miami's coast.

The project, led by OMA Partner Shohei Shigematsu, is developed in collaboration with Coral Morphologic and University of Miami Researchers, the project is also supported by the City of Miami Beach.

On the ReefLine’s masterplan as well as a distinct sculpture within it, Shigematsu will work with a team of expert marine biologists, researchers, architects and costal engineers.

The large-scale environmental public art project is initiated by cultural placemaker Ximena Caminos, who will also serve as the project’s Artistic director. 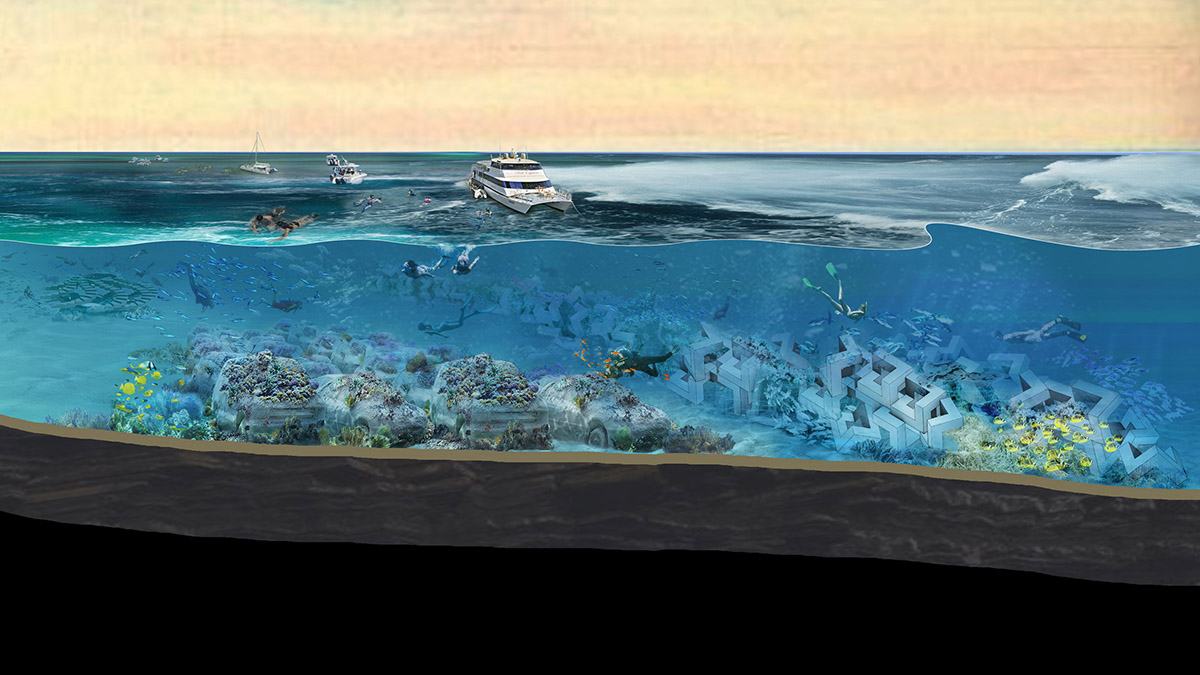 The design will be a critical habitat for endangered reef organisms, promoting biodiversity and enhancing coastal resilience. OMA's masterplan includes a geometric, concrete modular unit that can be deployed and stacked from South Beach to the north, following the topography of the sea bed.

The living breakwater is the connective tissue for the overall masterplan and will be punctuated by a series of site-specific installations.

"We are excited to collaborate again with Ximena on a project that brings together culture and community," said Shohei Shigematsu, OMA Partner.

"The ReefLine is unique because it brings attention to and mitigates the dangers of climate change in Miami, while simultaneously enriching the city’s vivid art scene."

"We look forward to working with the diverse group of experts and professionals on our first underwater cultural masterplan and sculpture," added Shigematsu. 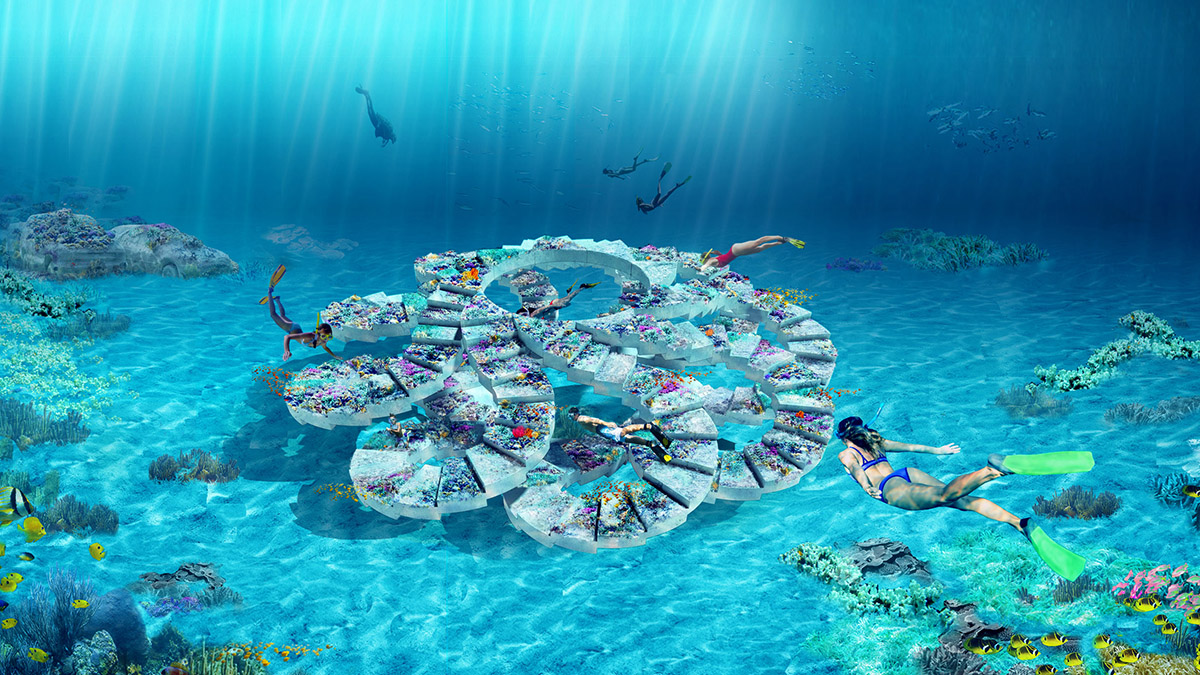 As OMA explains, the project will be completed in seven stages, with the first mile slated to open December 2021—the first phase will open with permanent installations by Argentine conceptual artist Leandro Erlich. Shohei Shigematsu of OMA will also be one of the artists contributing to the project.

Artists Ernesto Neto and Agustina Woodgate have been tapped for subsequent commissions.

OMA stated that the Argentinean artist Leandro Erlich will create an underwater incarnation of his popular sand-sculpted “traffic jam”, which was commissioned by the City of Miami Beach during Art Week Miami Beach 2019.

Titled Concrete Coral, the site-specific installation will reframe cars and trucks—a symbol of the emissions that endanger our planet—as new vehicles for environmental change.

Leandro Erlich will create an underwater incarnation of his popular sand-sculpted “traffic jam”, which was commissioned by the City of Miami Beach during Art Week Miami Beach 2019. Image © Leandro Erlich

"This series of artist-designed and scientist-informed artificial reefs will demonstrate to the world how tourism, artistic expression, and the creation critical habitat can be aligned," said Ximena Caminos.

"The ReefLine is a singular investment in civic infrastructure, public art and environmental protection that will pay dividends over the coming decades and attract ecologically-minded tourists and art lovers to Miami."

Shigematsu’s sculpture park explores "the nature of weightlessness underwater." By designing a sculptural stair, which a rudimentary architecture element suggestive of directionality and movement, the stair is taken out of its usual context and transformed into an underwater folly.

"Like the circular formation of the atoll, a series of sinuous spiral stairs create a three-dimensional structure reminiscent of marine life," said OMA. 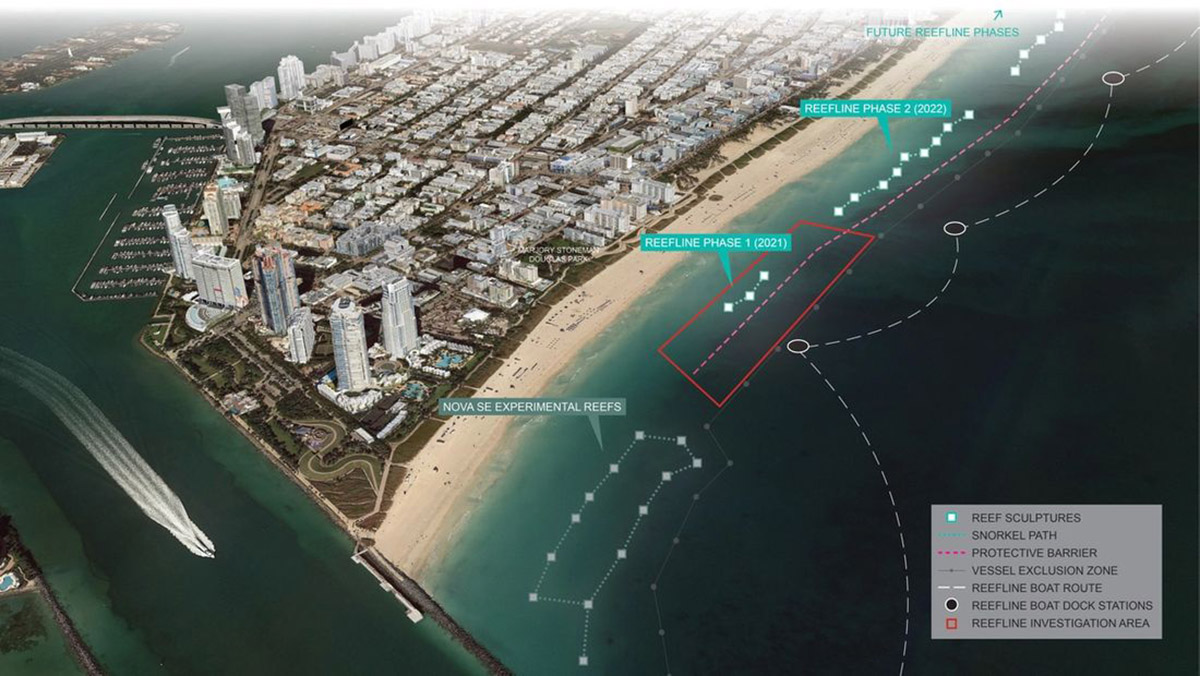 The sculpture park presents an organic form providing layered zones for coral reef growth and interstitial spaces for exploration. The stairs rotate around a central forum for underwater gathering and activities.

The ReefLine was conceived by BlueLab Preservation Society and Coral Morphologic and will be developed in collaboration with the City of Miami Beach and researchers from University of Miami.

The project received concept funding and support from the Knight Foundation’s Art Challenge Award 2019 and a Blavatnik Family Foundation grant, as well as endorsement from the XPRIZE Foundation. The project was designed by Partner Shohei Shigematsu with Associate Christy Cheng and OMA New York.

All images courtesy of OMA unless otherwise stated.