KPF completes origami-like Scalpel skyscraper in the heart of London Kohn Pedersen Fox (KPF) has completed an origami-like skyscraper in the heart of the city of London, which acts like "a folded and mirrored" tower that reflect its surrounding set alongside Richard Rogers' the Lloyd's building.

Named 52 Lime Street, also known as The Scalpel, the 190-metre office tower completes the city cluster which creates like "a type of urban drama", according to William Pedersen, Design Principal and Founding Partner of Kohn Pedersen Fox Associates. 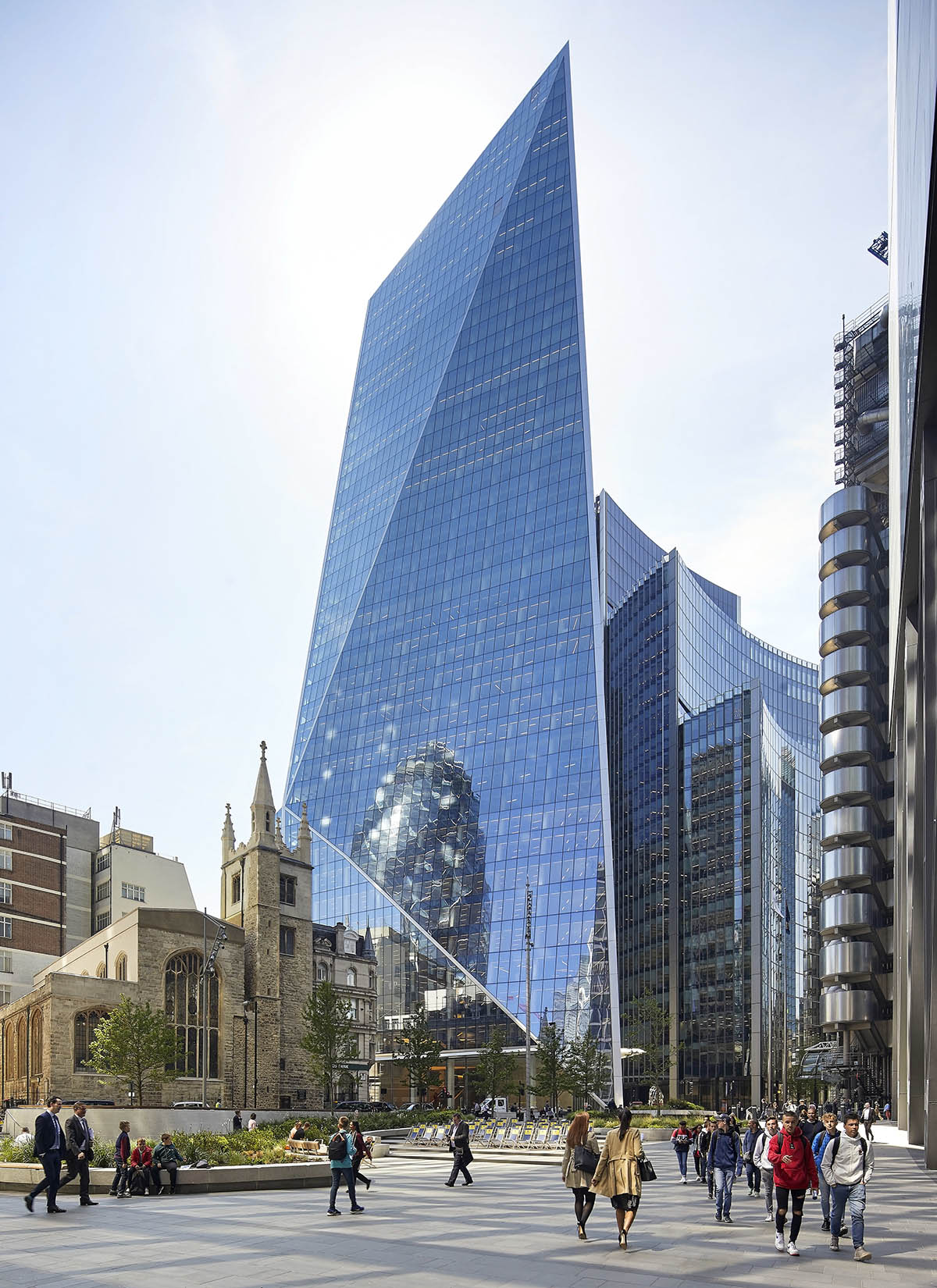 "In London, the City Cluster has created, in effect, a type of urban drama. Each participant is unique, but collectively they make an architectural conversation," said William Pedersen.

"52 Lime Street leans back to respect the view corridor for St Paul’s Cathedral, creating a paired, but mirrored, gesture with the Leadenhall Building which makes for a theatrical urban conversation," he added. 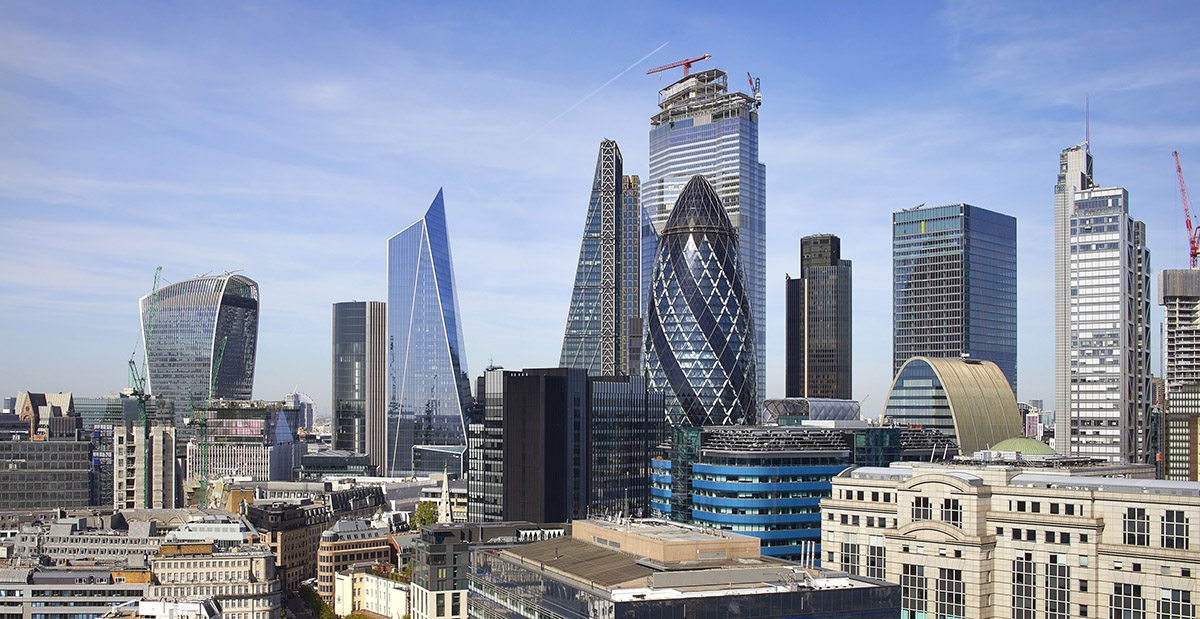 A considered addition to the skyline, the building works in conversation with its neighbours to complement the overall composition of the ‘City Cluster’. Image © Hufton + Crow

The skyscraper was designed for W.R. Berkley as the location of its UK headquarters and to let to tenants. A considered addition to the skyline, the building works in conversation with its neighbours to complement the overall composition of the "City Cluster" whilst improving the public realm at the base with the introduction of a new public plaza.

The simple geometric form of the 35-storey tower is reinforced by partially reflective glass and bright metallic fold lines. 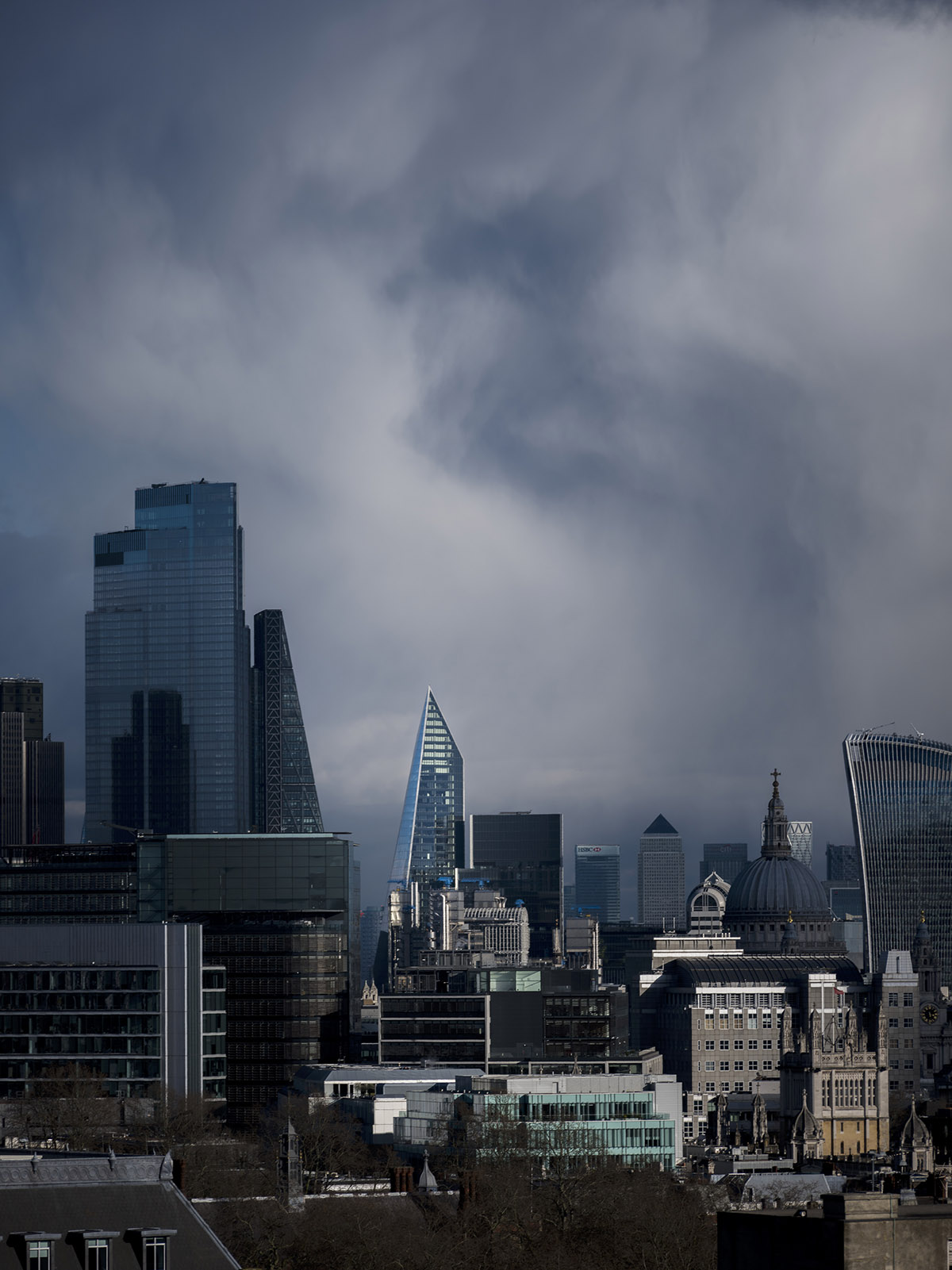 The Scalpel, dramatic image of 52 Lime Street in the City of London. Image © Timothy Soar

"Giving our building a folded, origami-like quality, was the impetus for its form. As it rises, it folds back to mount to a point on the sky. As always, we intend for our tall buildings to be social participants in their contexts," Pedersen continued.

"Never have we had the opportunity to add one of our tall buildings to a context of such richness and drama."

Pedersen added that "At the outset of the project, the City Cluster was in its infancy." Working with the planning authorities, KPF demonstrated the potential for a tall building on the site that would maintain the street edge, preserve protected views of St Paul’s Cathedral and enhance the public realm. 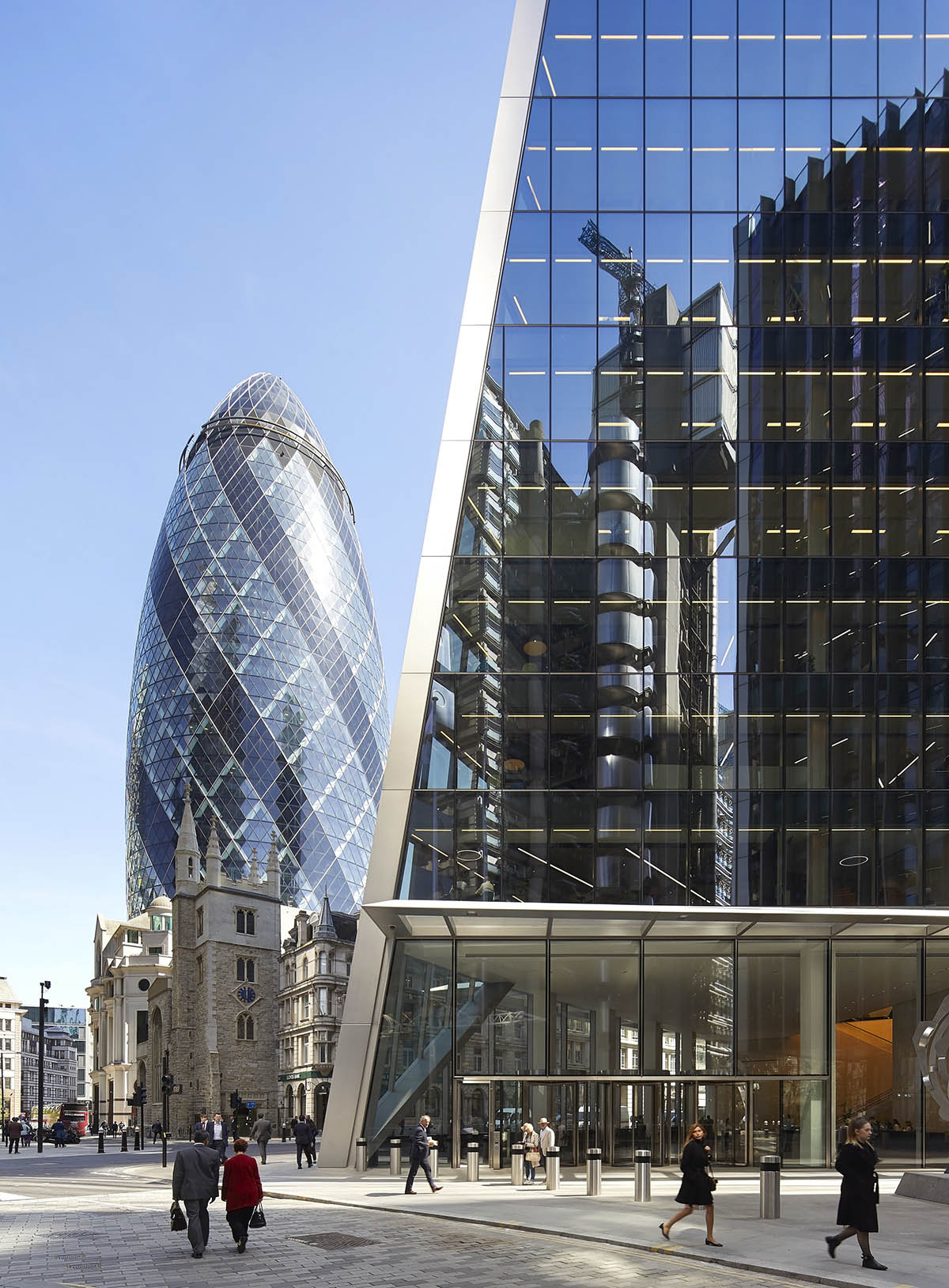 To protect the view of St Paul’s Cathedral, the building needed either to be stepped or inclined behind the cathedral’s dome from key vantage points.

The inclined façade offered a calm silhouette while providing a wider variety of floor plate types and greater efficiencies. The taut, sculptural form reinforces the more formal urban planning interventions at the ground floor, which shape the external space adjacent to the neighbouring buildings while holding the building line along Leadenhall Street. 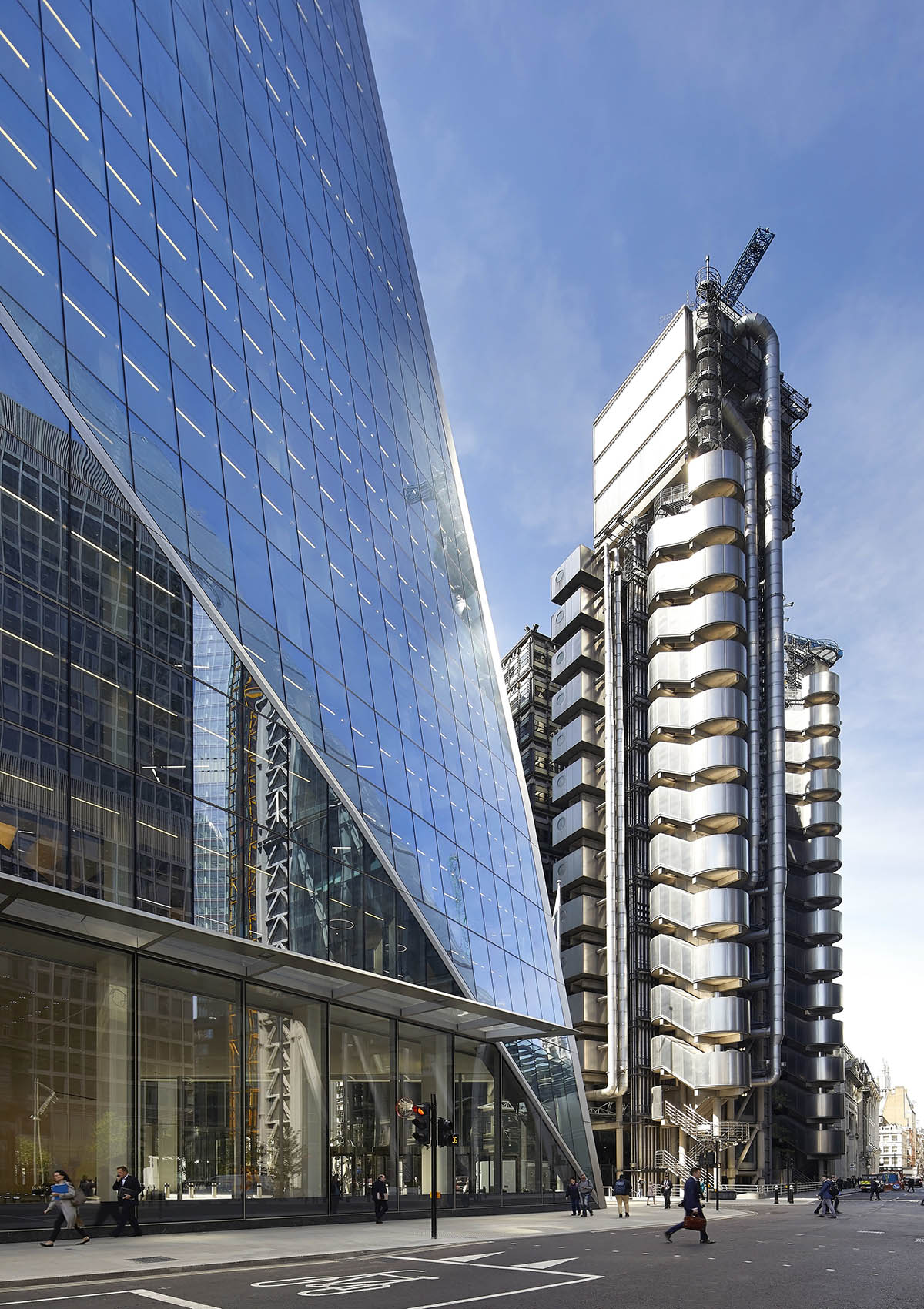 The massing also provides a counterpoint to the surrounding historic buildings including the Grade I listed church, St Andrew’s Undershaft.

An offset core provides large uninterrupted and virtually column-free floor plates that are efficient to plan for a variety of tenants, with floor-to-ceiling glass optimising daylighting of the office floors and supplying spectacular views across London. This core is located on the south of the building, against the façade, which provides shading to the interior and allowed the project team to insulate the façade most directly affected by solar gain - reducing the demand for air conditioning and significantly reducing energy use. The building achieved an "Excellent" rating under BREEAM 2014.

In the interior spaces, KPF uses a palette of high-quality natural materials in the the double-height entrance lobby, lift lobbies, lift interiors and washrooms, featuring timeless modern design and detailing. 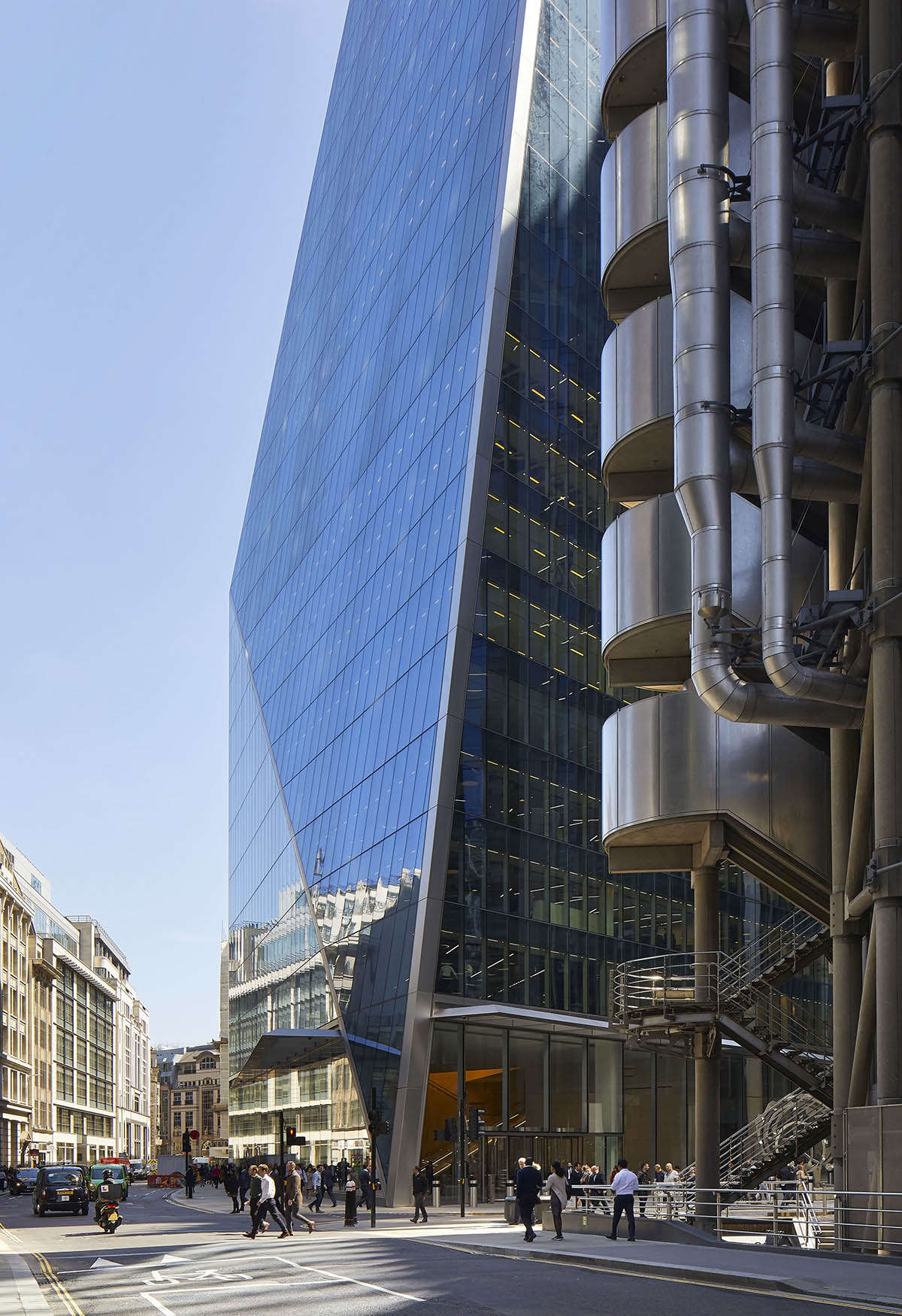 An illuminated ceiling to the triple-height atrium above the escalators, emulates natural daylight. Provision has been made for an independent coffee shop at ground floor level, overlooking the new public space, to activate and enliven the immediate area.

Four allegorical stone relief panels – the Woodford Stones – representing the classical elements of earth, air, fire and water, have been incorporated in the façade of 52 Lime Street. 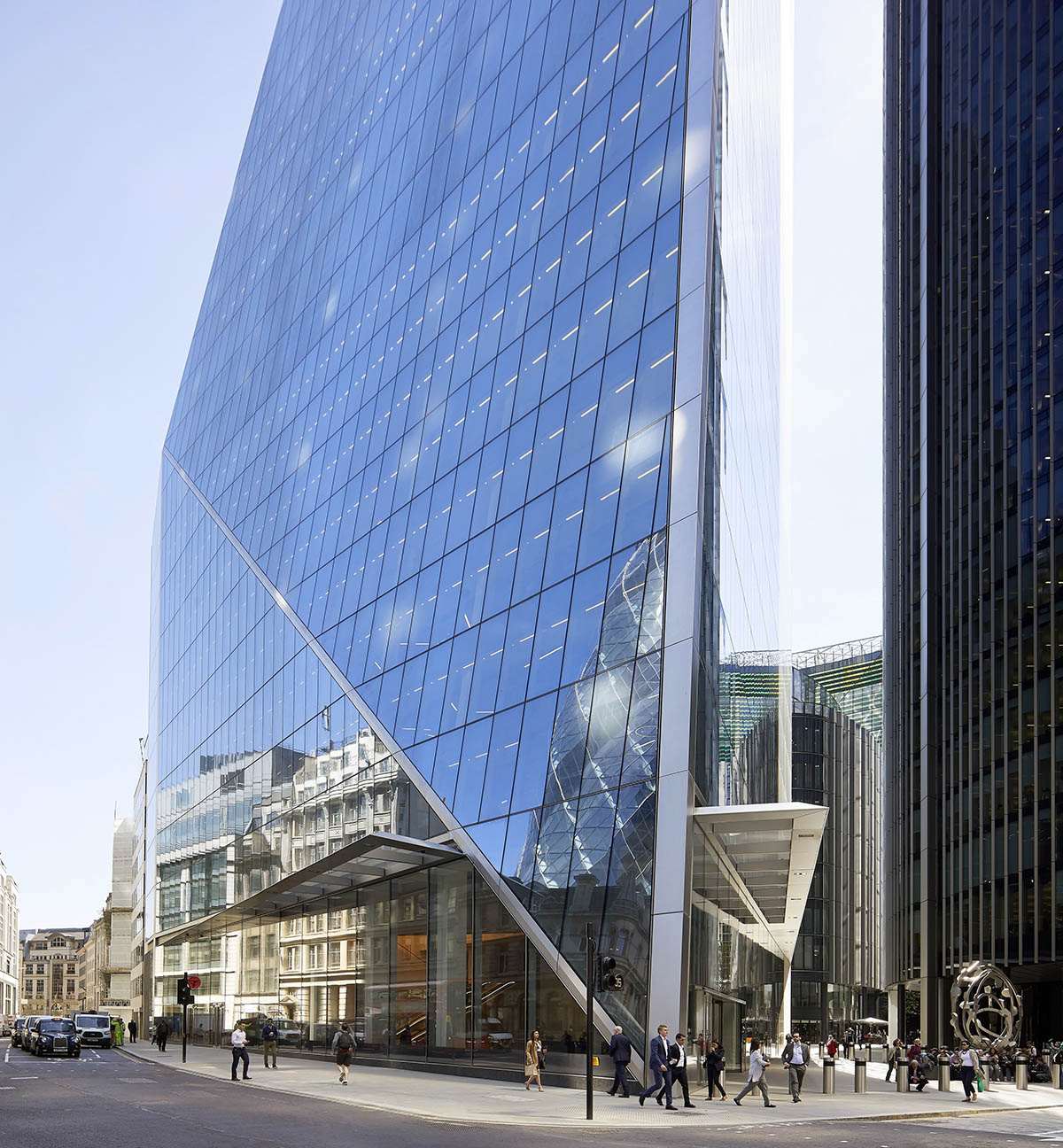 Detail: a new plaza has been created, featuring a sculpture by Joel Perlman. Image © Hufton + Crow

Commissioned from the renowned sculptor James Woodford for the previous Lloyd’s building, which opened in 1957, the stones had been moved to the party wall of the former 52-54 Lime Street. They were relocated to 52 Lime Street as part of the new development. 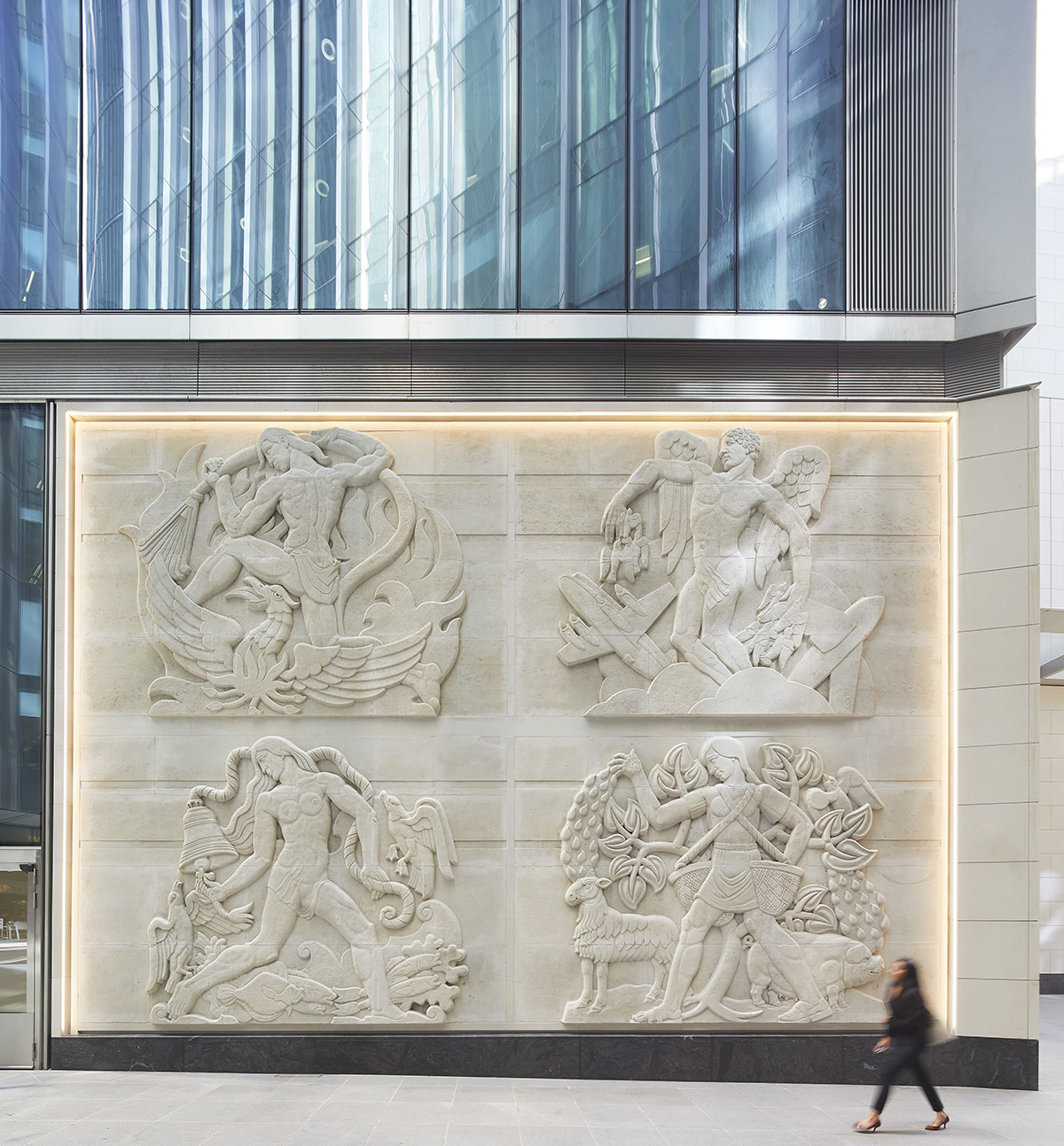 Four allegorical stone relief panels – the Woodford Stones – representing the classical elements of earth, air, fire and water have been incorporated in the façade of 52 Lime Street. Image © Hufton + Crow 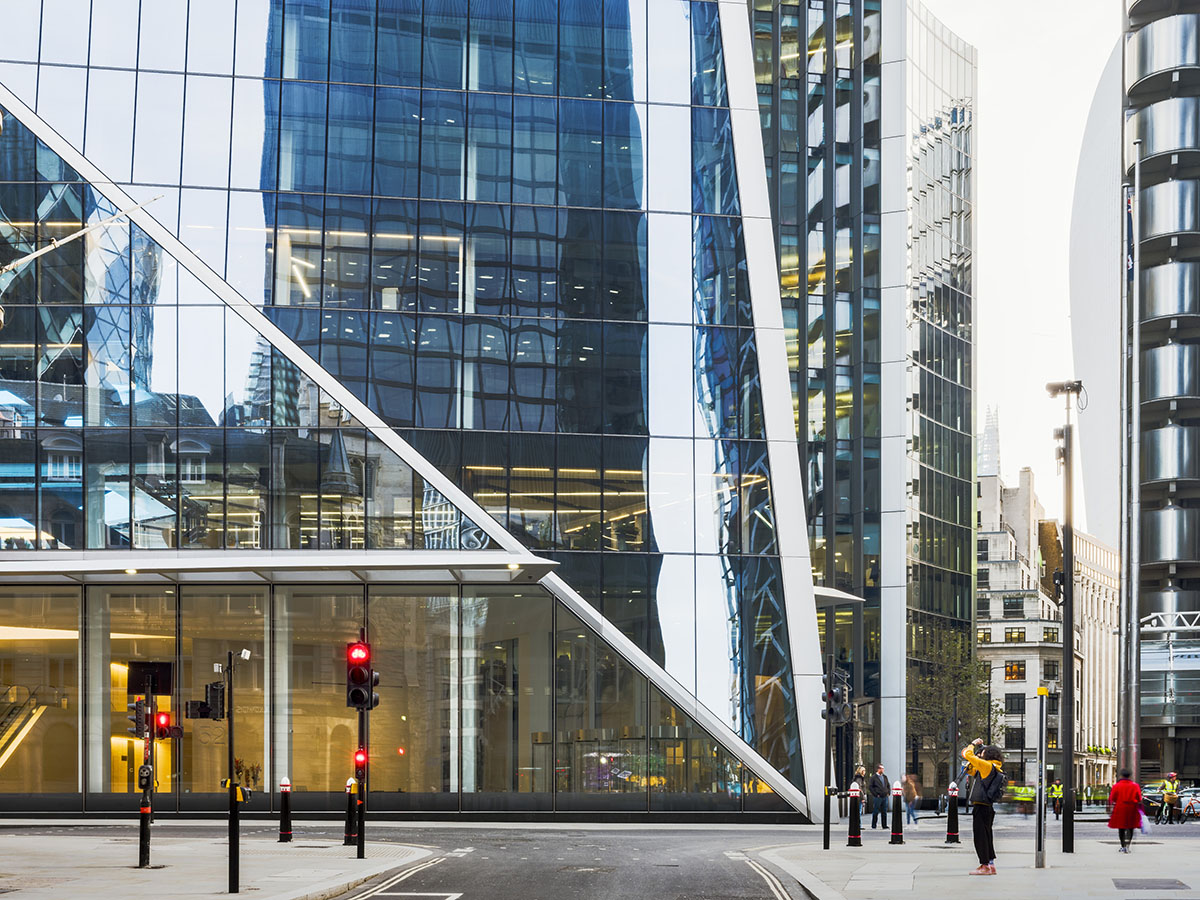 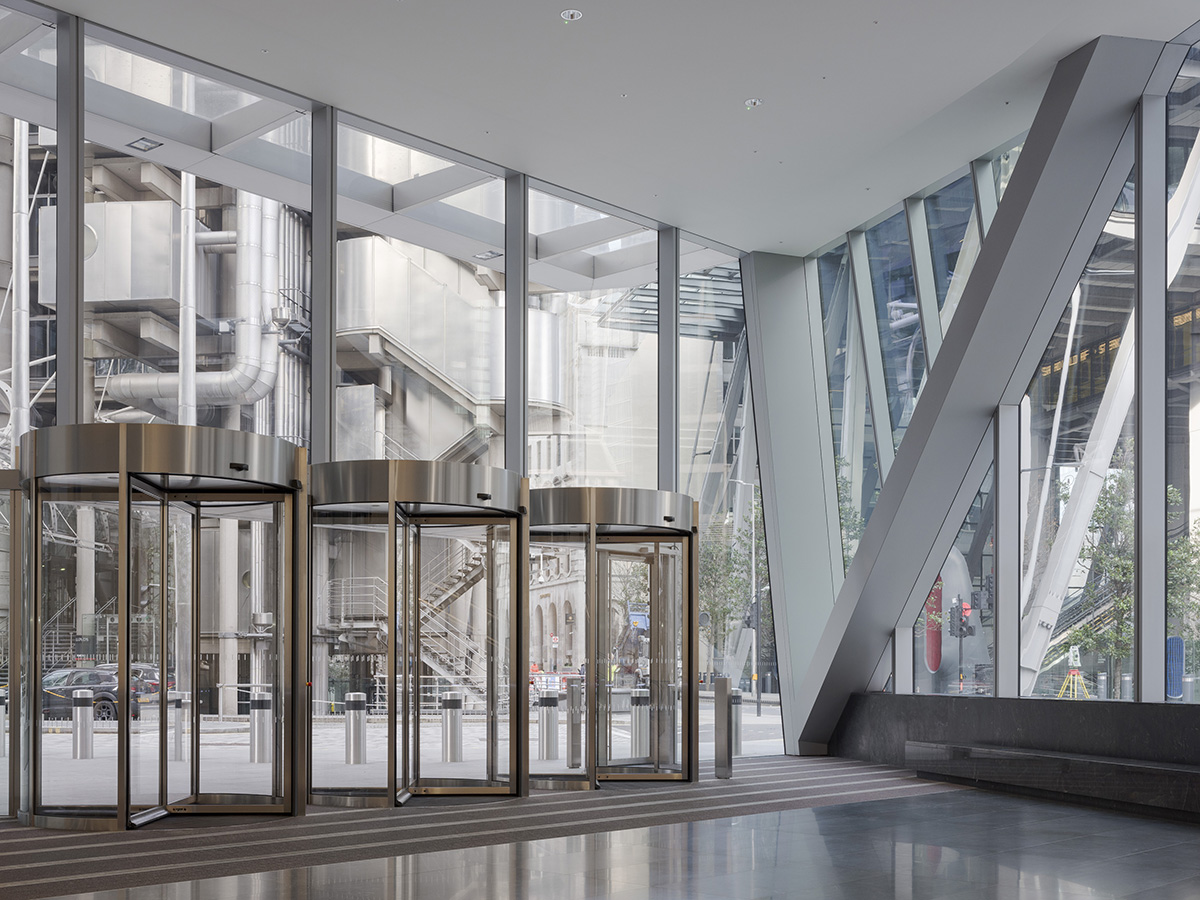 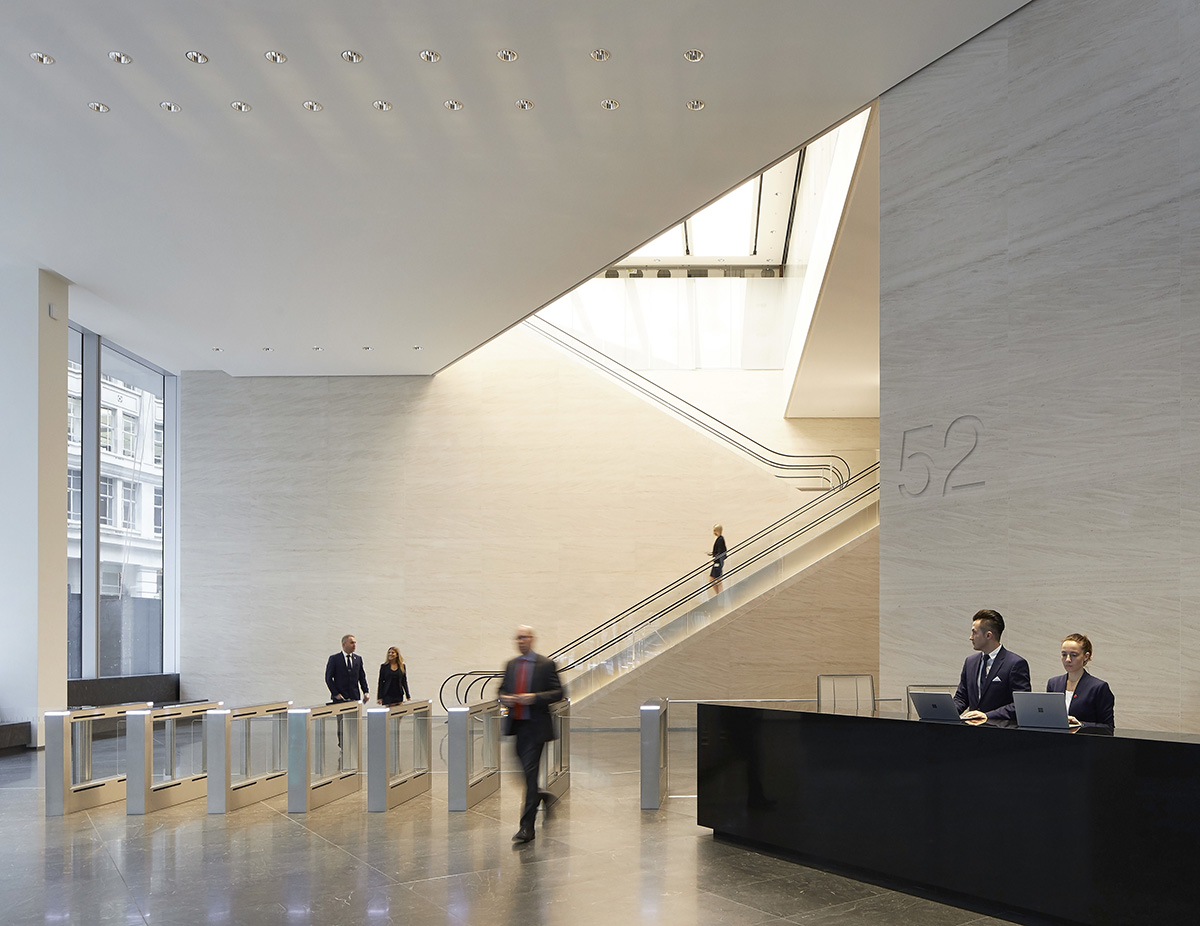 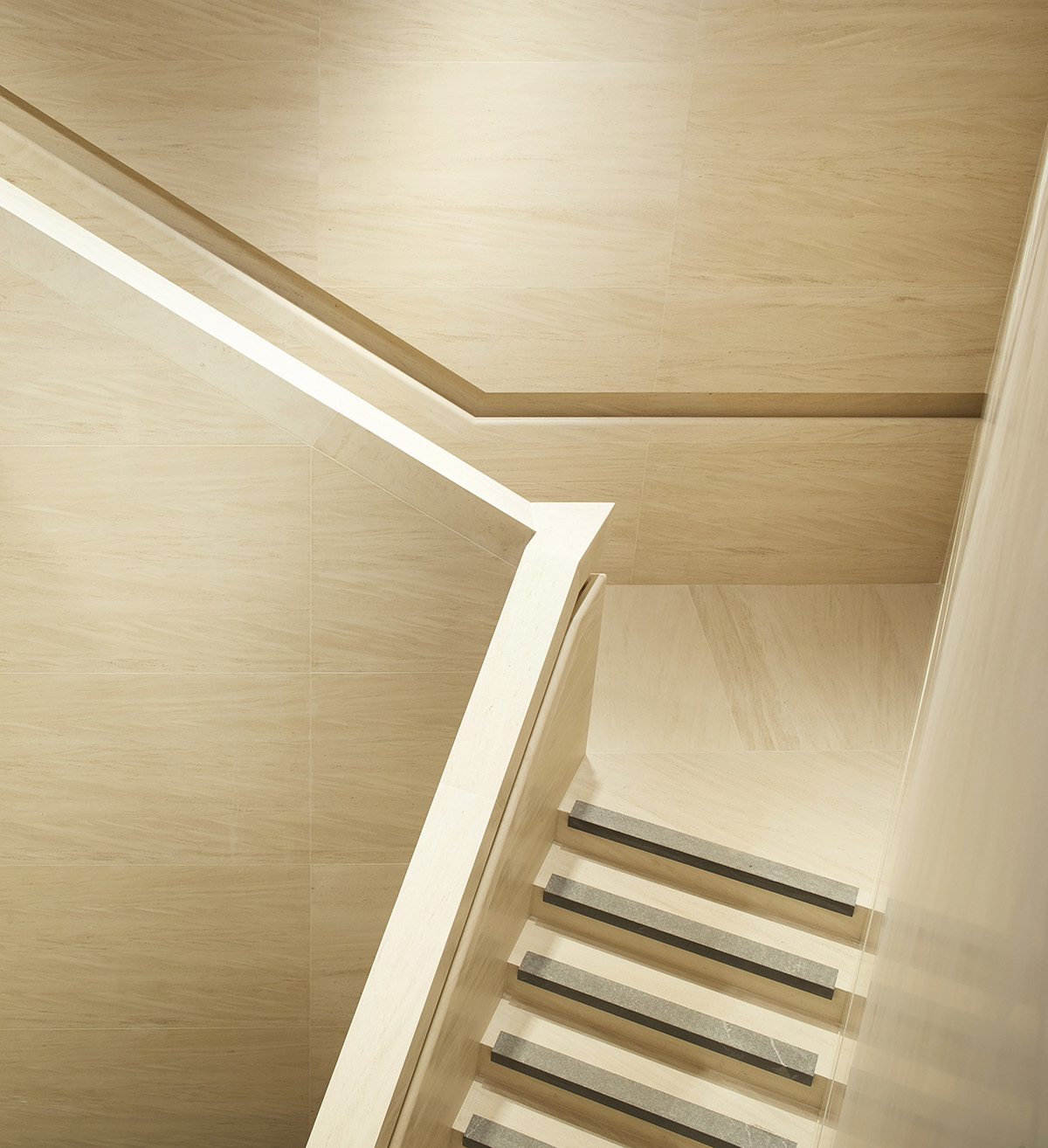 A sculptural limestone staircase from the entrance lobby was developed in close collaboration with stone masons. Image © Hufton + Crow 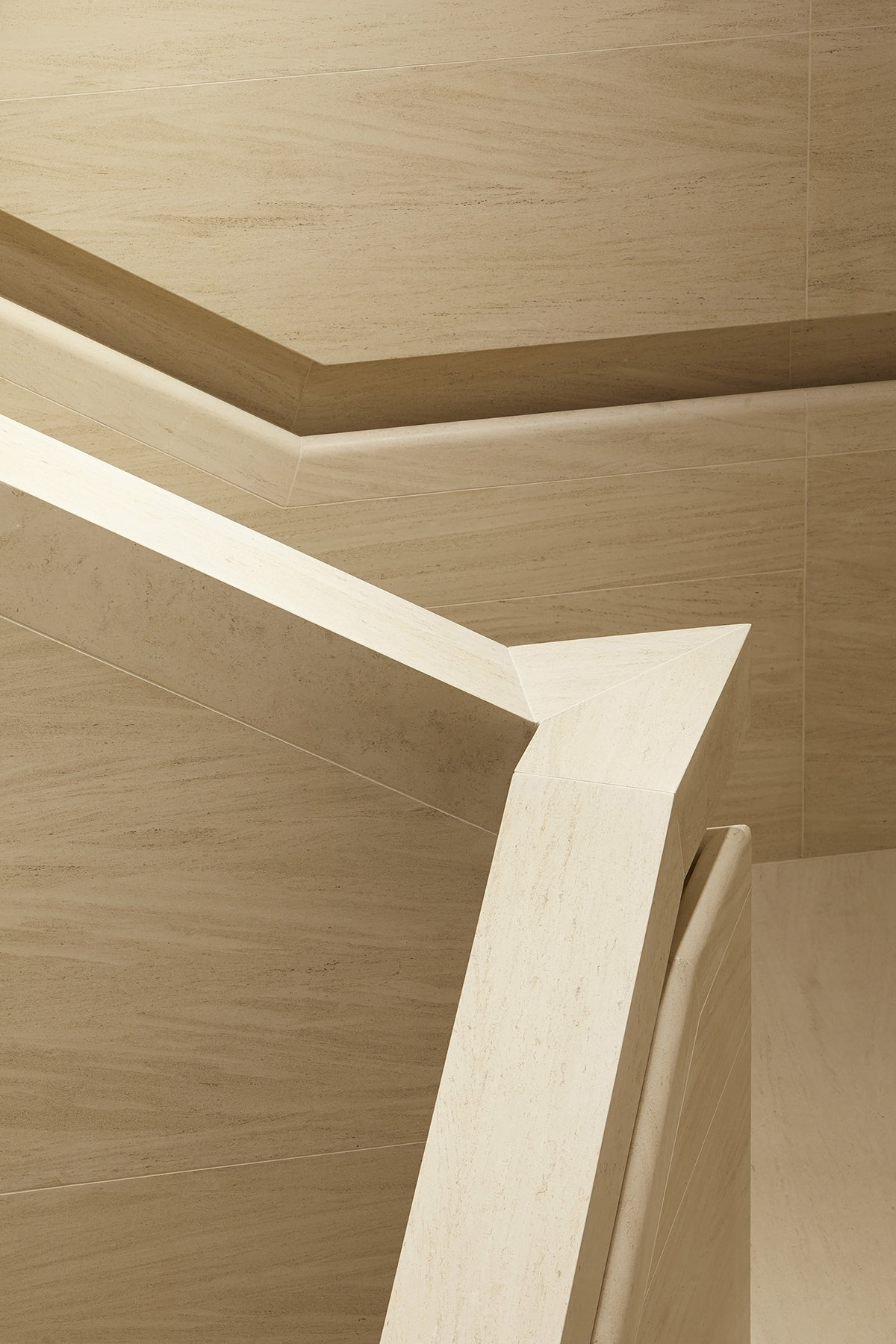 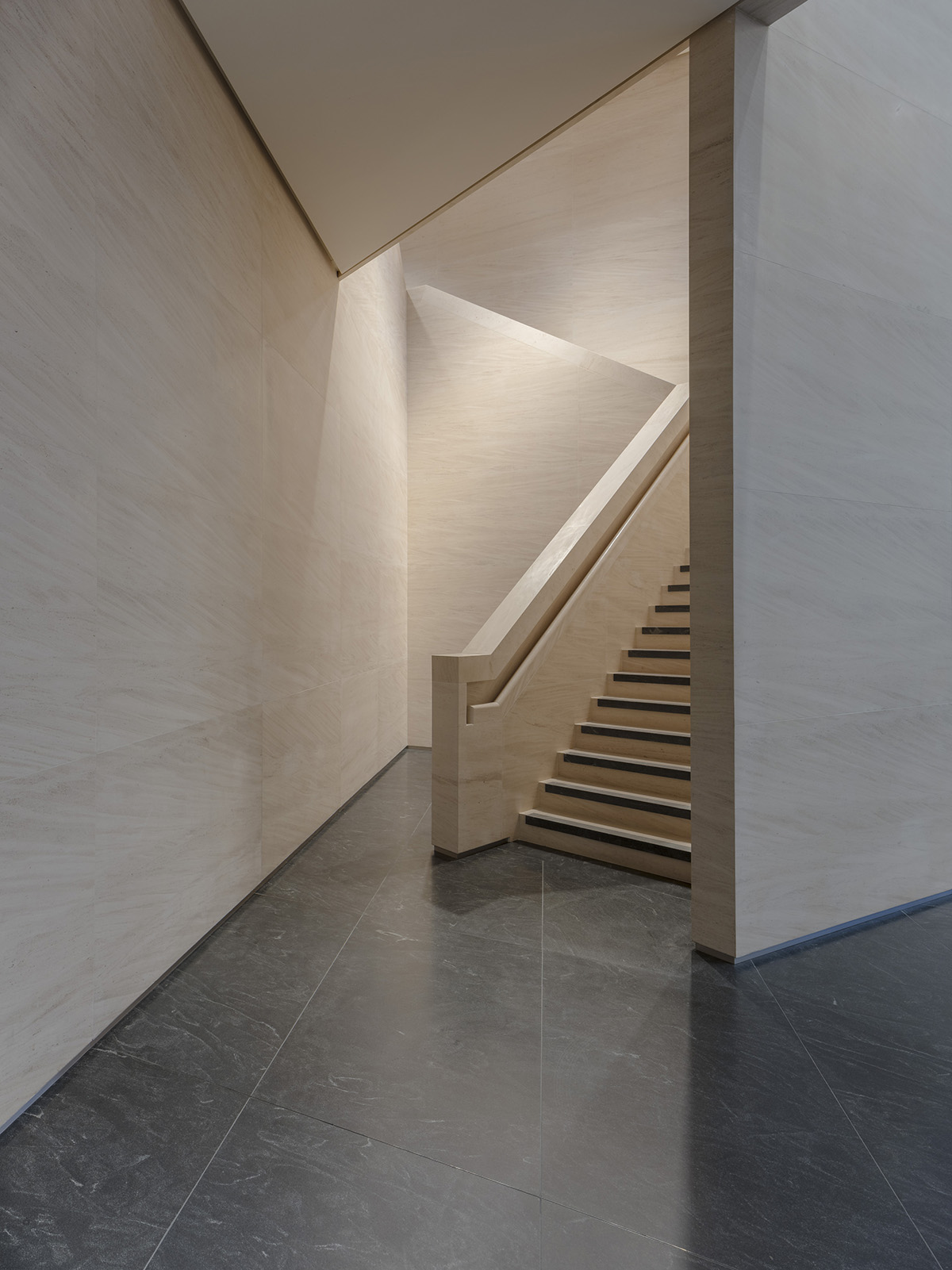 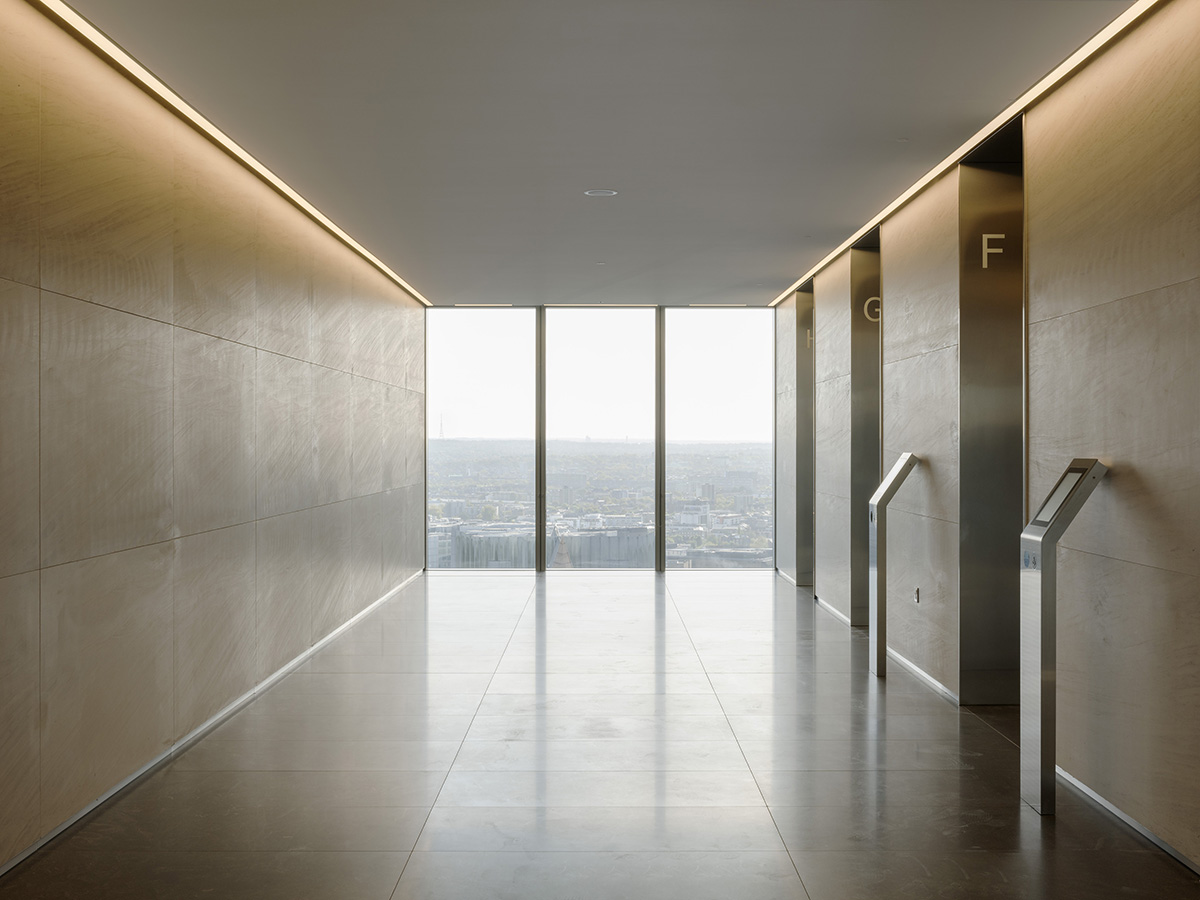 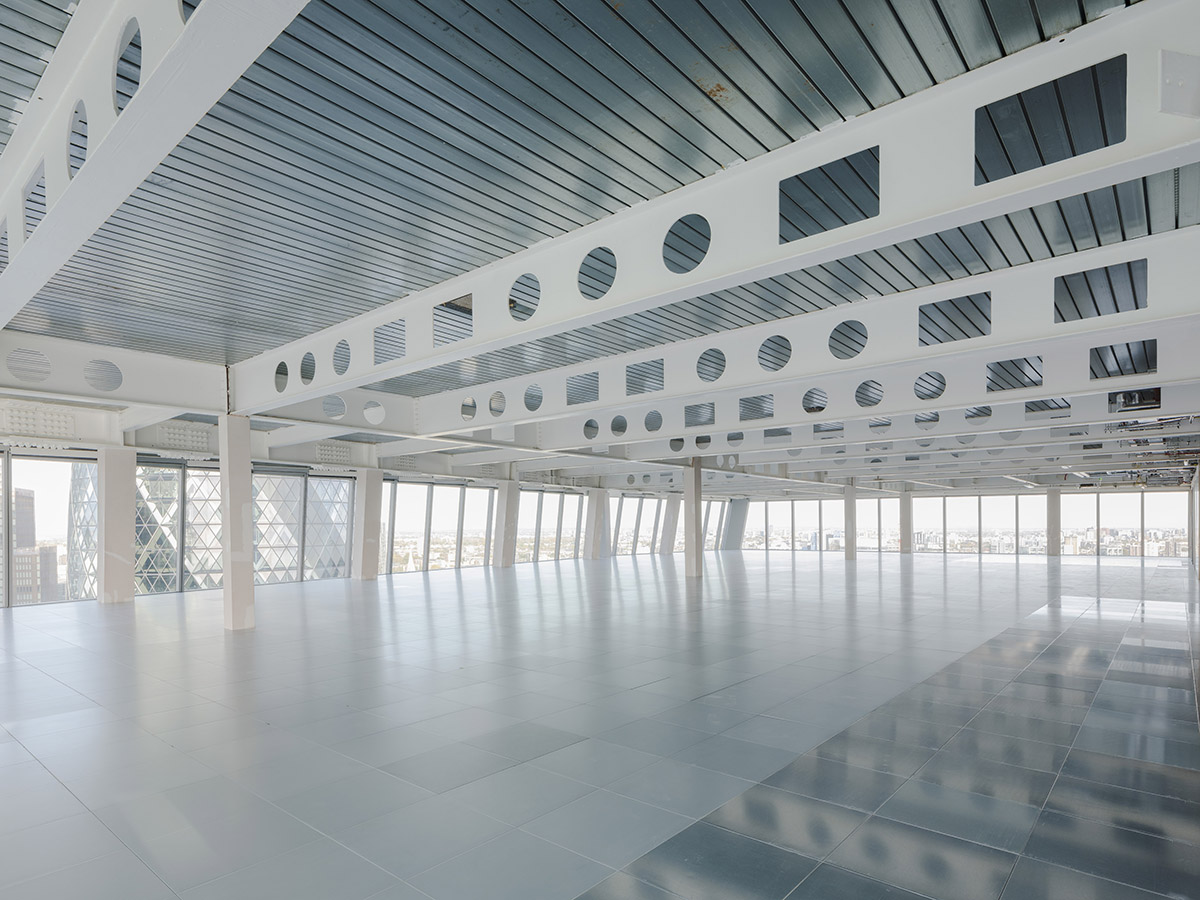 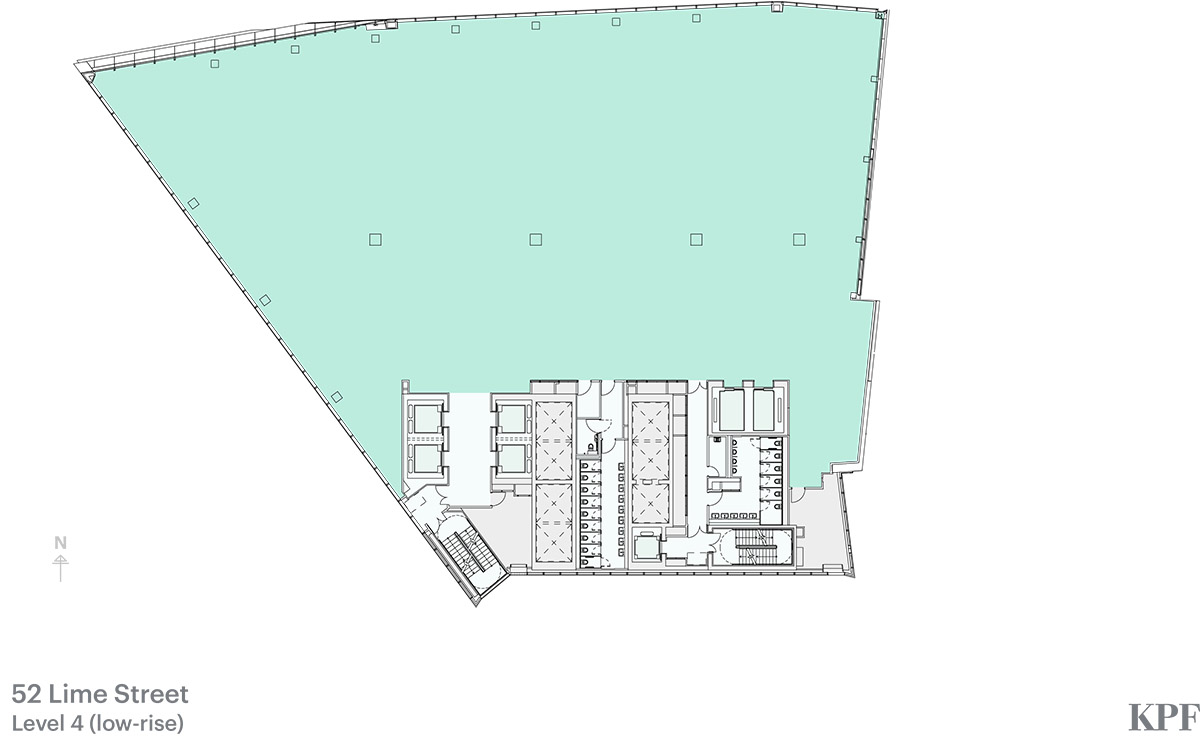 KPF was founded in 1976 by A. Eugene Kohn, William Pedersen, and Sheldon Fox. Having over 650 staff and 30 principals, the studio designs a great number of skyscrapers in the world.

Top image: 52 Lime Street leans back to respect the view corridor for St Paul’s Cathedral, creating a paired, but mirrored, gesture with the Leadenhall Building which makes for a theatrical urban conversation. Image © Hufton + Crow