One would be forgiven for thinking that a structure fully built of concrete could be cold,  heavy and overwhelming - especially someone's house; yet "Casa Meco" designed by atelier RUA, a one-story concrete house designed for a retired Dutch couple in this small village is anything but. Meco Beach -or rather, Praia do Meco, protected by an argil cliff is a spectacular spot located within the Serra da Arrábida National Park, around 40km south of Lisbon.

The clients' original idea was spend there about 3 months a year, another 3 months in a house they own in Tuscany and the rest of the time travelling. In contrast to the Tuscany house, they wanted a place that would be very open to the outside with a large central space. 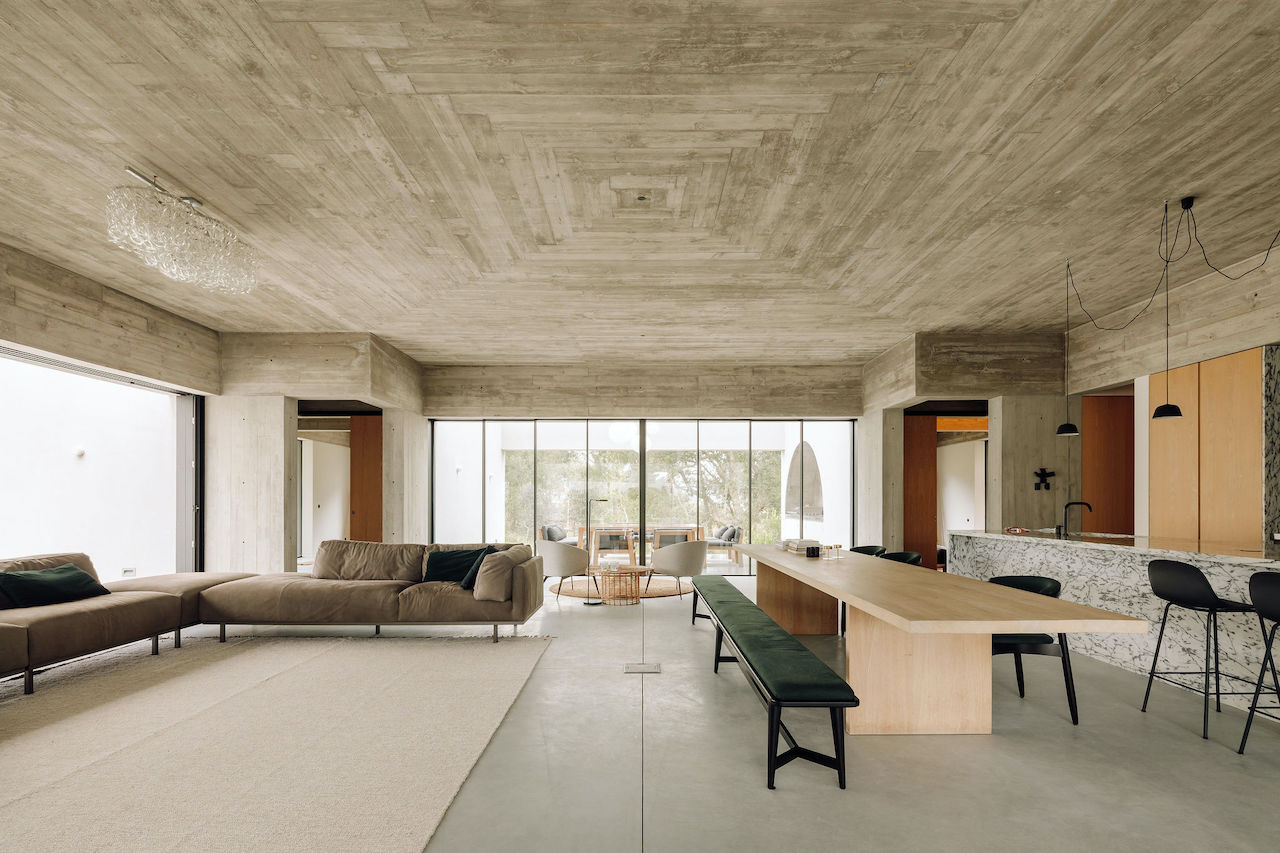 Thus, the architects designed this pared-back holiday home around an enormous common open area with three different vistas of its verdant surroundings of the area. Considering that this is after all a holiday house that is just minutes from the Atlantic Ocean, concrete makes for a cool shelter in the Summer months.

The one-story concrete house with shaded exterior terraces cut-out its quadrangular footprint. It is a volume composed of a large roof supported in its four corners by the volumes formed by the private spaces of the program. 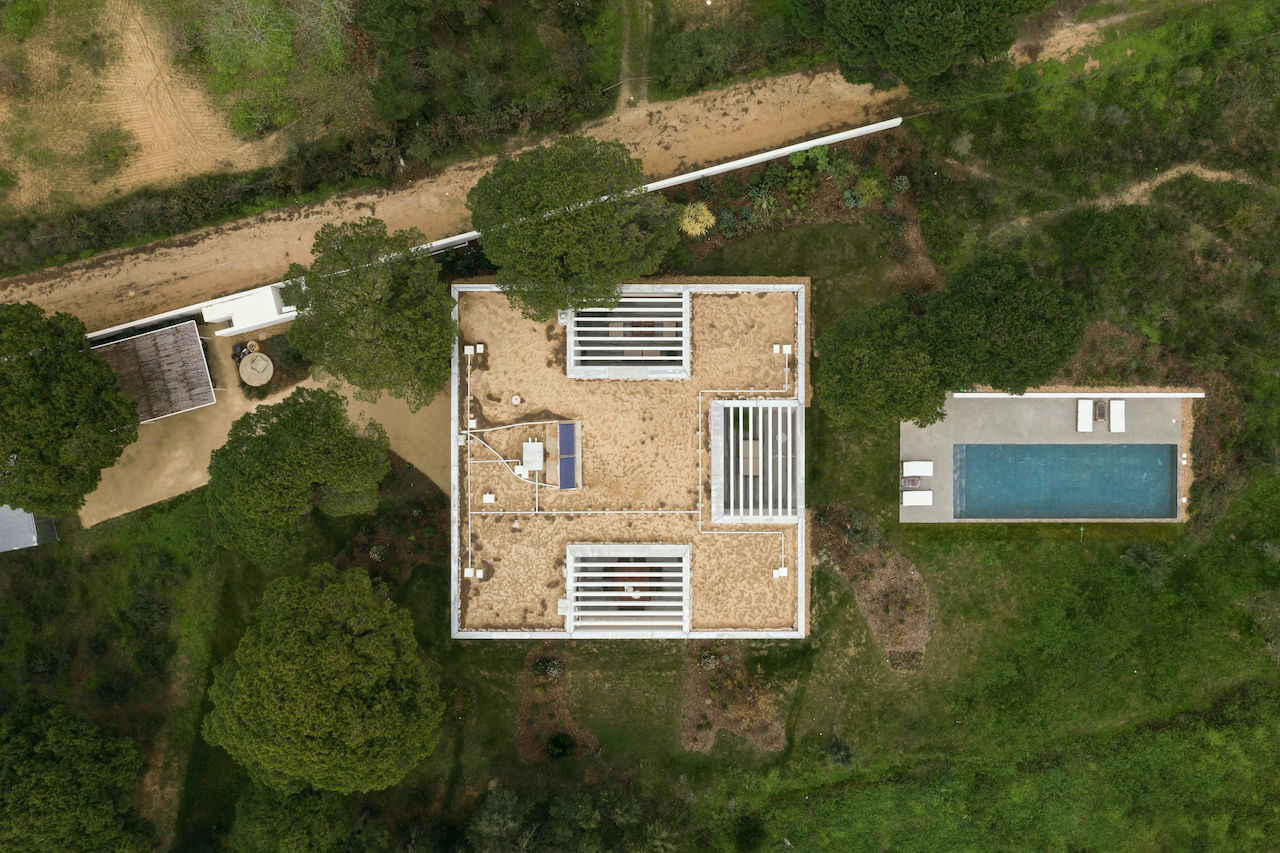 The clients requested as few doors as possible and instead to provide an open, centralised plan from which all other spaces evolve.

At the heart of the plan lies a huge communal living area with an exposed-concrete ceiling and floor; here, with an inherent playfulness in their space plan the architects team used geometry as the engine to design the whole house as a "perfect square" –the bedroom suite clusters are located at the four corners of the 21m square footprint of the house, each complete with their own bathrooms, dressing areas and private patio, opening-up the indoors to the outdoors. 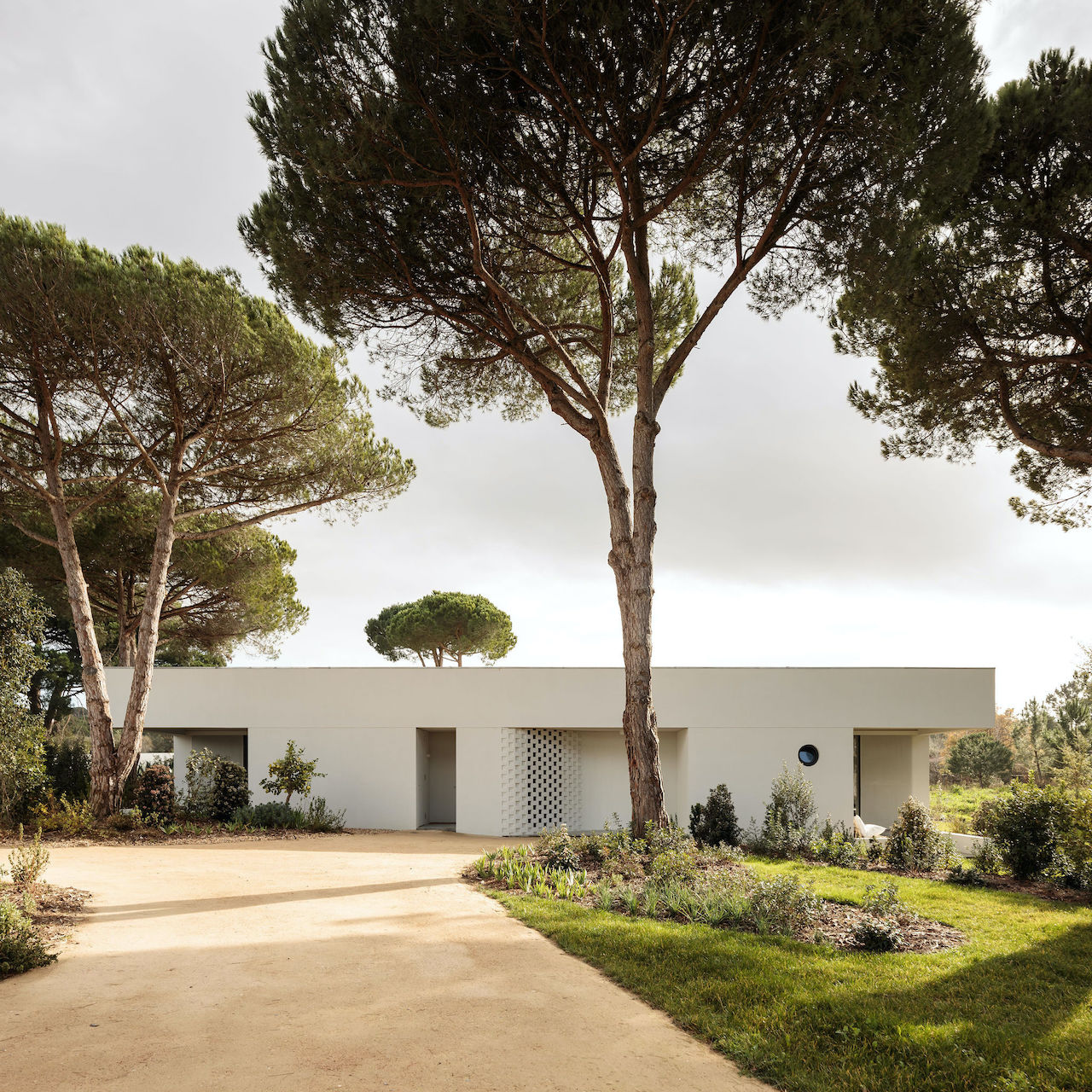 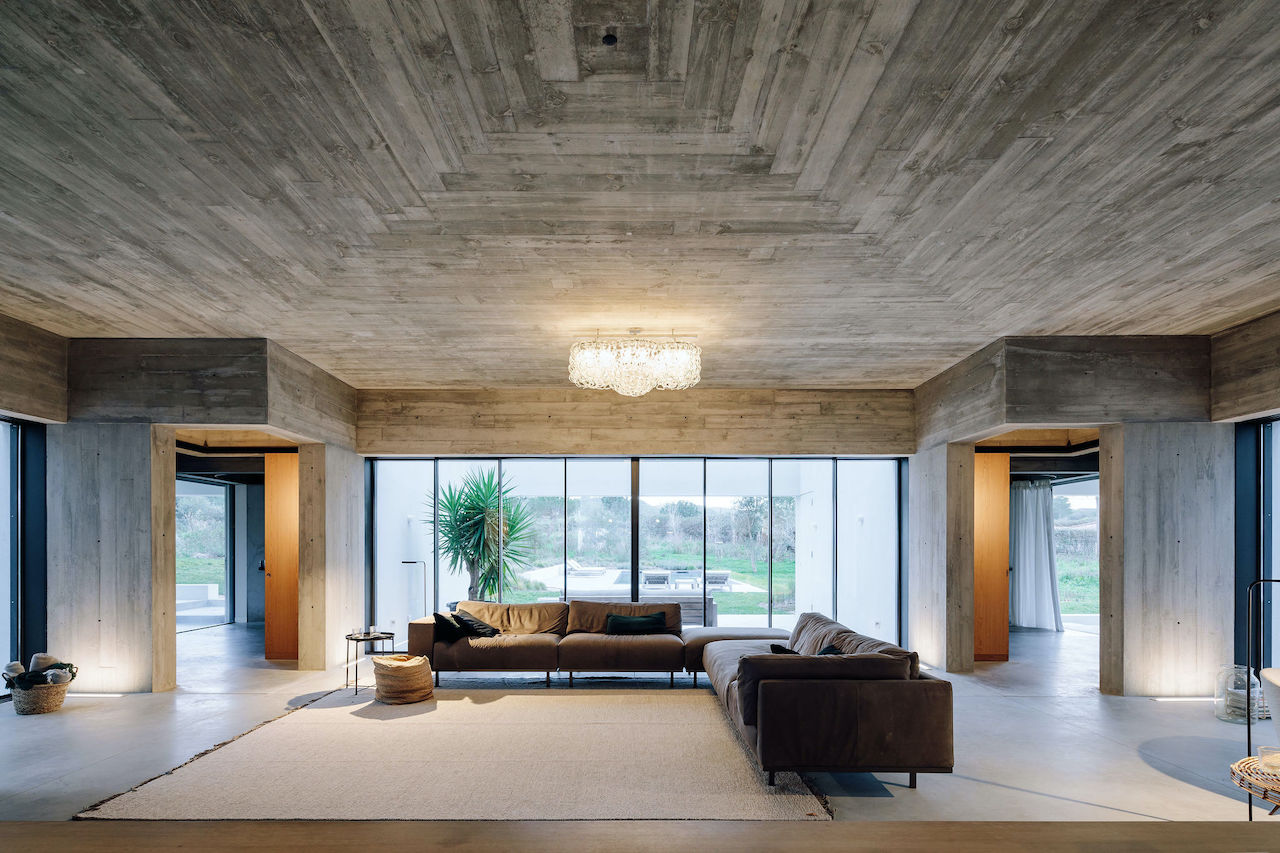 The diagonal progression through the house allows the discovery of different levels of intimacy. From the outside, one can wander through the semi-private terrace into the bedrooms. From here, space contracts in the bedroom vestibule that mediates the transition to the large living room space, that opens to the landscape.

There, the sequence inverts until one reaches the opposite corner of the house. Between them, towards East, South and West, three terraces emerge as a transition between the garden and the large central living space and kitchen area. 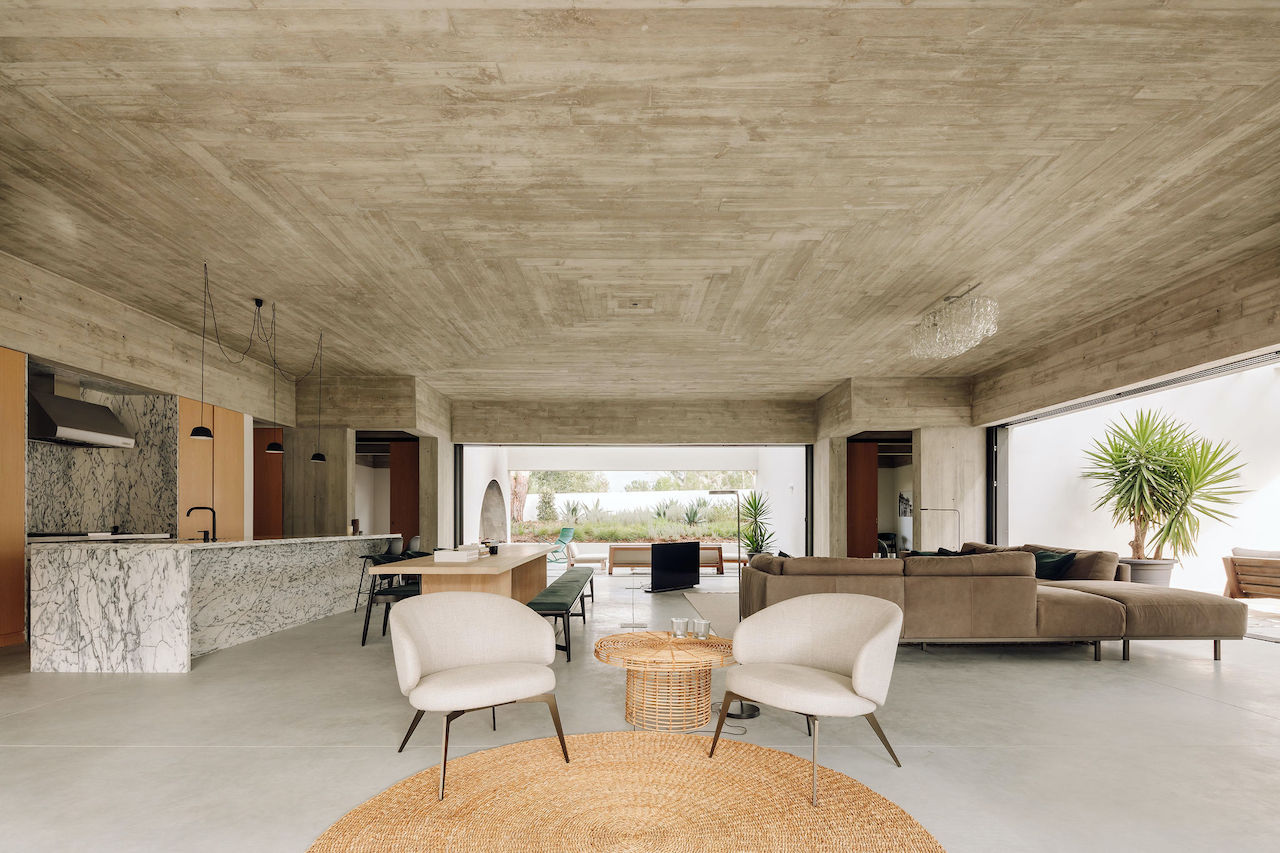 The triangular shaped plot has a total area of 13,850 square meters is oriented South-North. The path to the plot runs alongside a white wall, showing the way to the entrance. Entering the plot, the building reveals itself.

A perfect square with four similar facades. Facing south, a clearance in the garden holds the 15m long swimming pool. 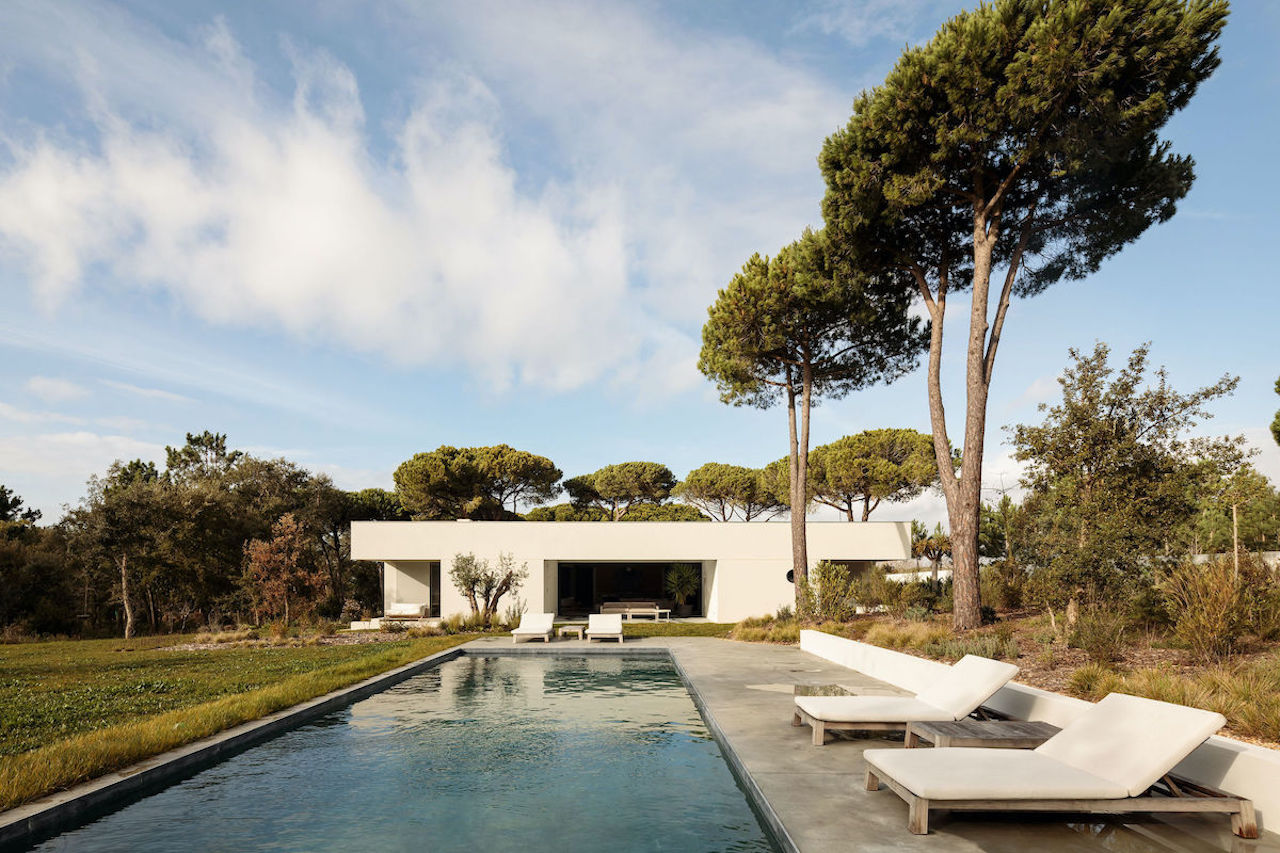 The choice of materials was the architects’ own in tune with their client, opting for exposed concrete, wood and marble; a choice of materials that represents a "gradation": concrete in the main structure and compartmentalisation, wood in "functional" elements such as doors or cabinets, and stone in the more refined accent details.

From the point of view of sustainability, the challenge was to use as little technology as possible. In fact, the house works quite well only with the cross ventilation it provides. There is no AC in the house and it is not really necessary, with some areas functioning as a transitional "filter". 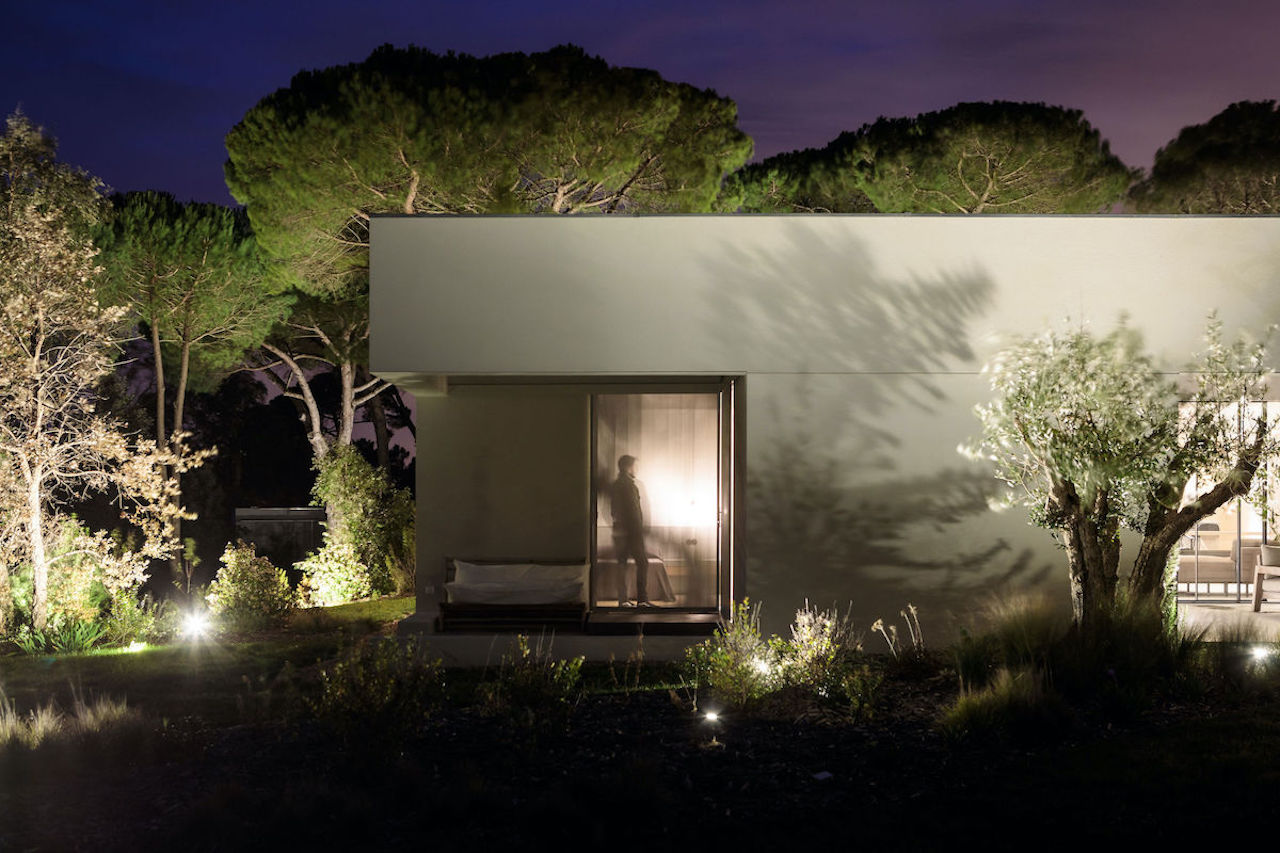 Aesthetically, the house is the result of a program and a reflection on how these people would like to live on this site, and the architects clearly provided a satisfactory solution while having some fun in the process. In the end, the clients are spending more time here than traveling or in Italy.