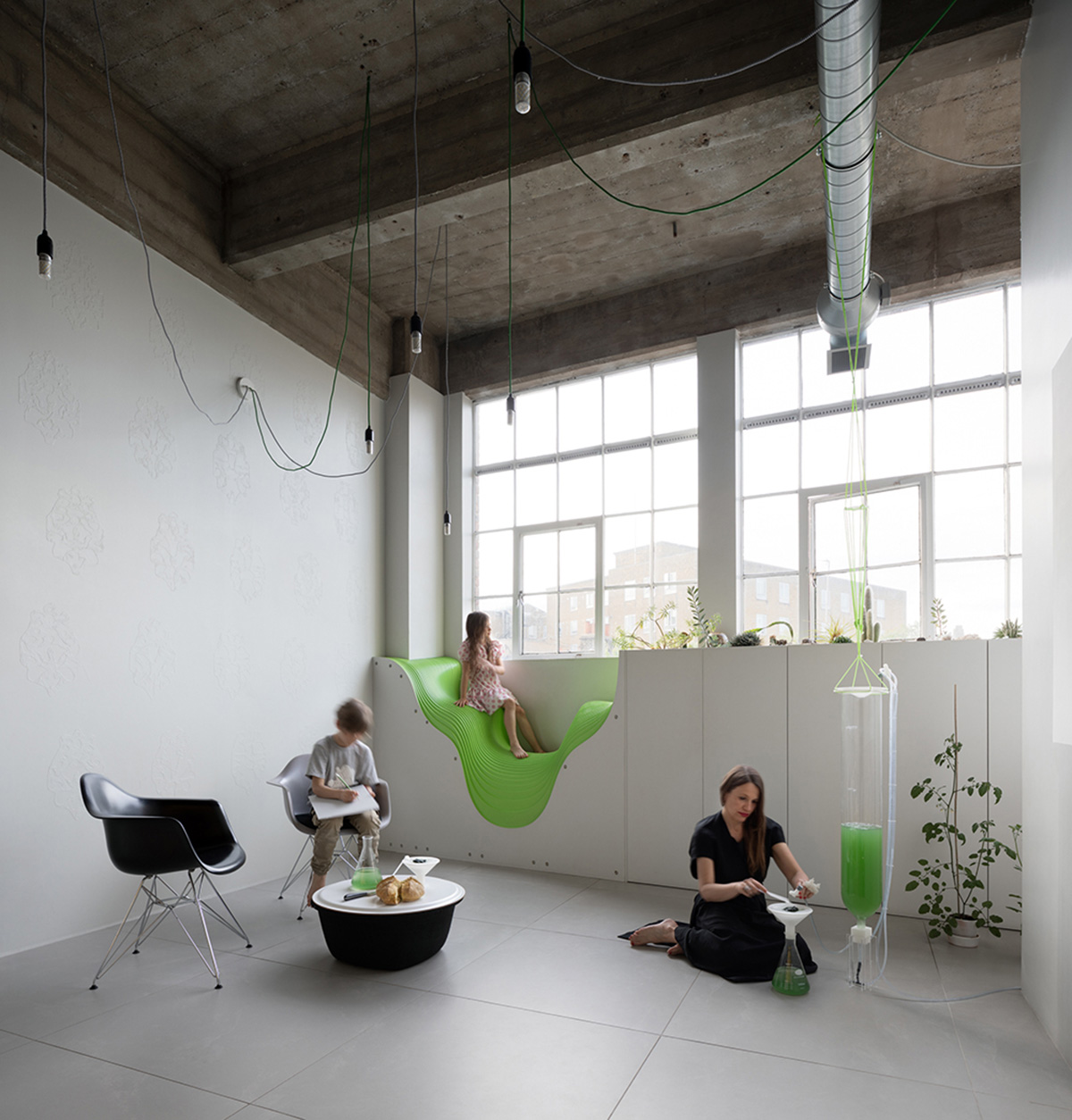 London-based architecture and research firm ecoLogicStudio has devised a new domestic algae garden, transforming air pollutants into highly nutritious aliments - which will easily be usable in our daily lives.

The project, named BioBombola, has emerged as a contribution and a new logic to discover new indoor cultivation methods feeding the current health crisis affected by the coronavirus pandemic.

ecoLogicStudio, led by Claudia Pasquero and Marco Poletto, devised BioBombola as a pioneering project that invites individuals, families and communities to cultivate a domestic algae garden – a sustainable source of vegetable proteins. 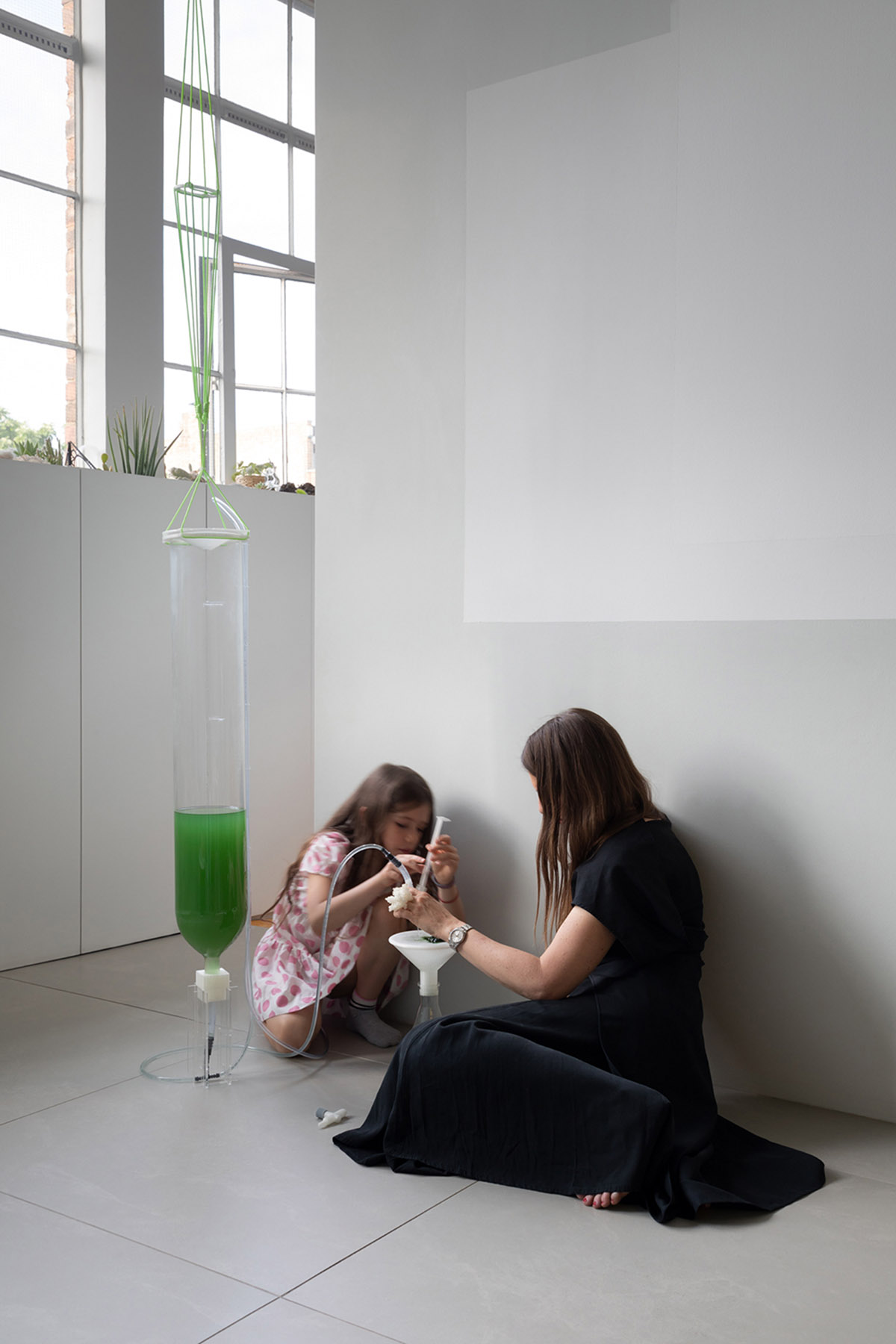 BioBombola is developed as part of Photo.Synth.Etica, an ongoing research programme, started in 2018 and developed by ecoLogicStudio in partnership with the Urban Morphogenesis Lab BPRO of The Bartlett UCL and the Synthetic Landscape Lab of the University of Innsbruck.

During the recent weeks of lockdown, the designers cycled everyday with their two children, Giacomo and Lulu, between their home in Broadway Market and their bio-lab in Hackney Wick (in London’s East End) while the kids were engaged in the home-schooling programme.

Spontaneously, they involved the whole family in the algae cultivation and in the collection of data on air pollution. 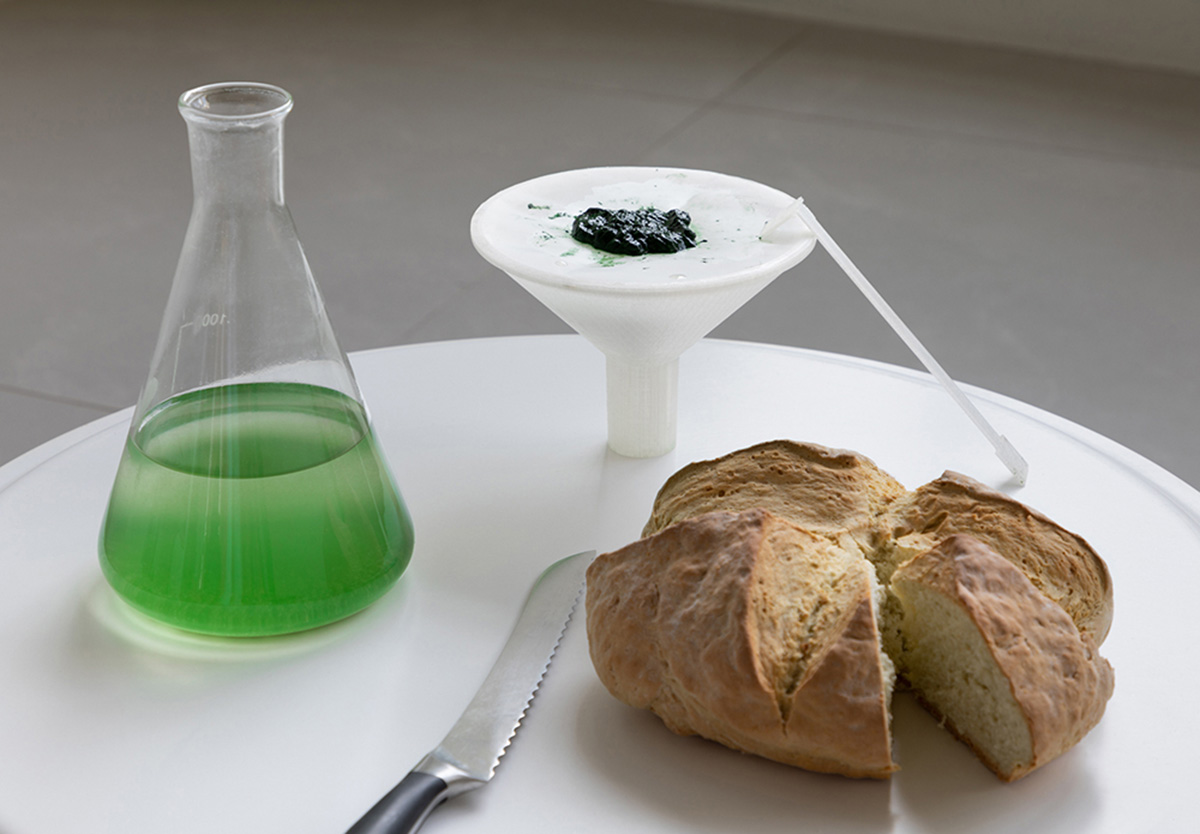 "The kids love harvesting Spirulina. We make vegetable protein bread every week with it now,” said Pasquero, "Spirulina has quite a sharp taste, somewhere between grass and nuts."

Following this experiment, ecoLogicStudio decided to develop the concept further and to create a minimal kit for indoor cultivation that includes the BioBombola – a harvesting kit for simple collection of fresh Spirulina ready to be consumed, a nutrients bag and a starter batch of Spirulina cells. 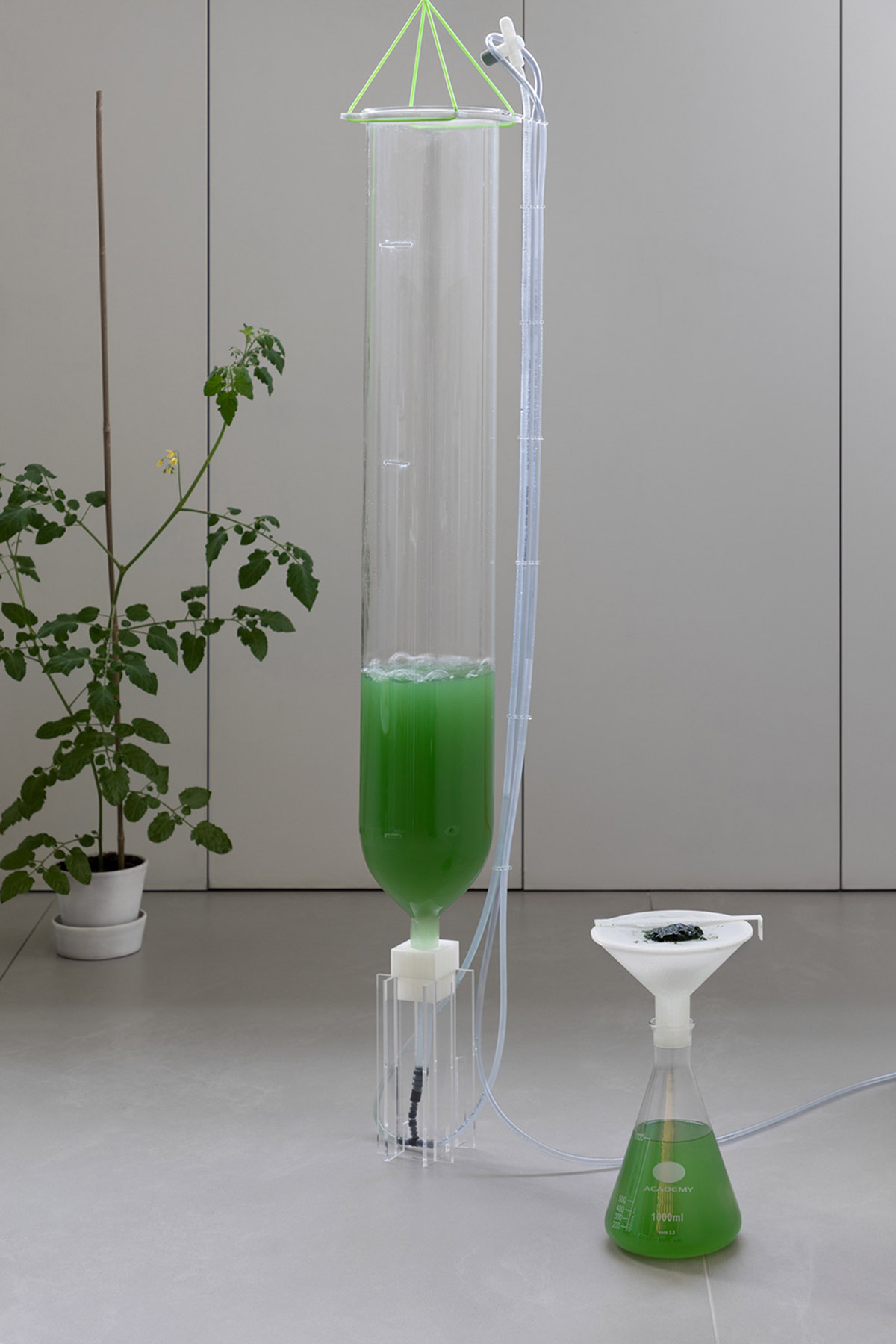 Each BioBombola is composed of a single customized photobioreactor, a one metre tall lab grade glass container, filled with 15 litres of living photosynthetic Spirulina strain (a type of cyanobacteria, which is a family of single-celled microbes that are often referred to as blue-green algae) and culture medium with nutrients. 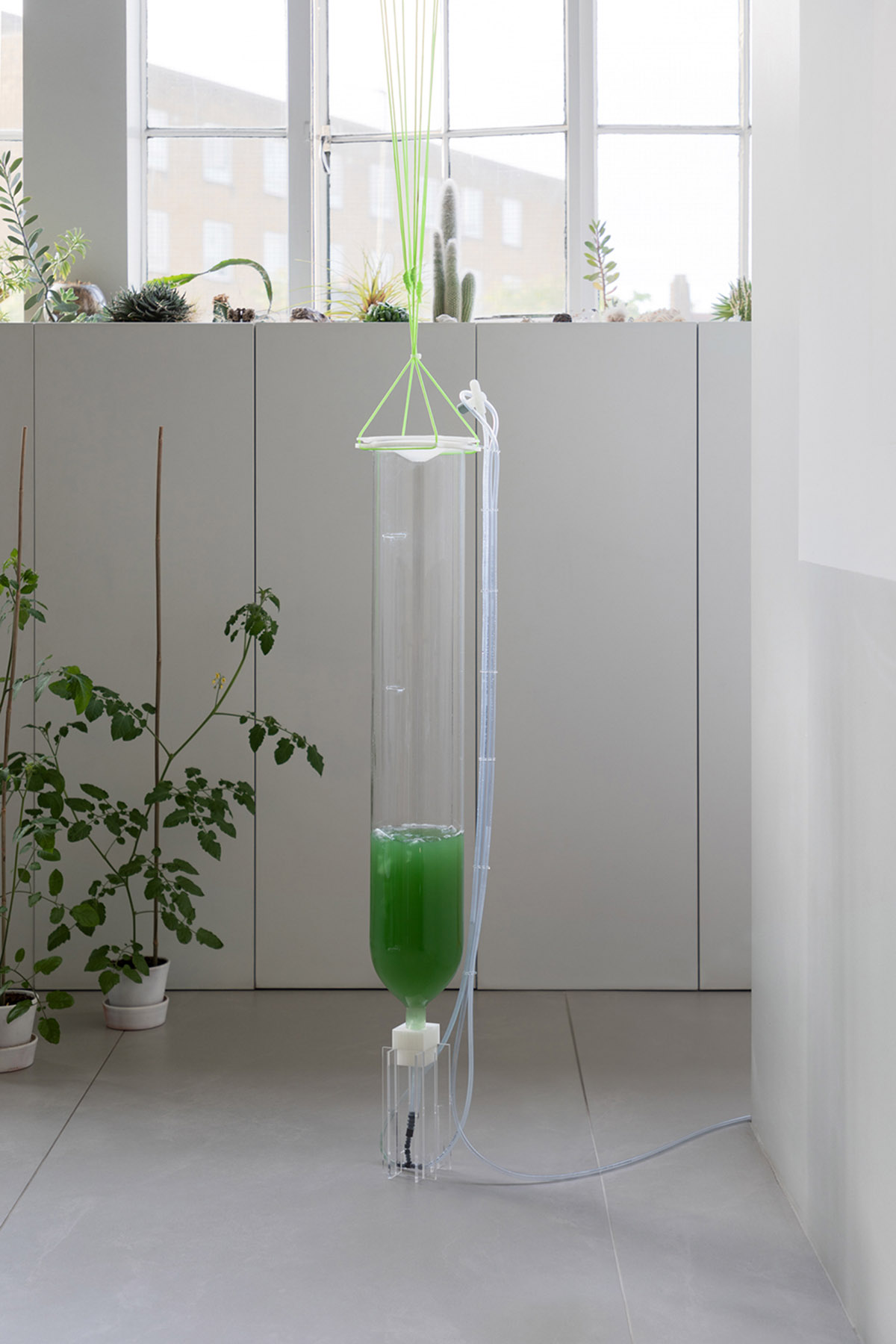 It also includes an air piping system and a small air-pump that constantly stirs the medium.

The gentle bubbling keeps the algae afloat, aids oxygenation and produces a calming sound that emanates with the fresh oxygen in the surrounding environment. 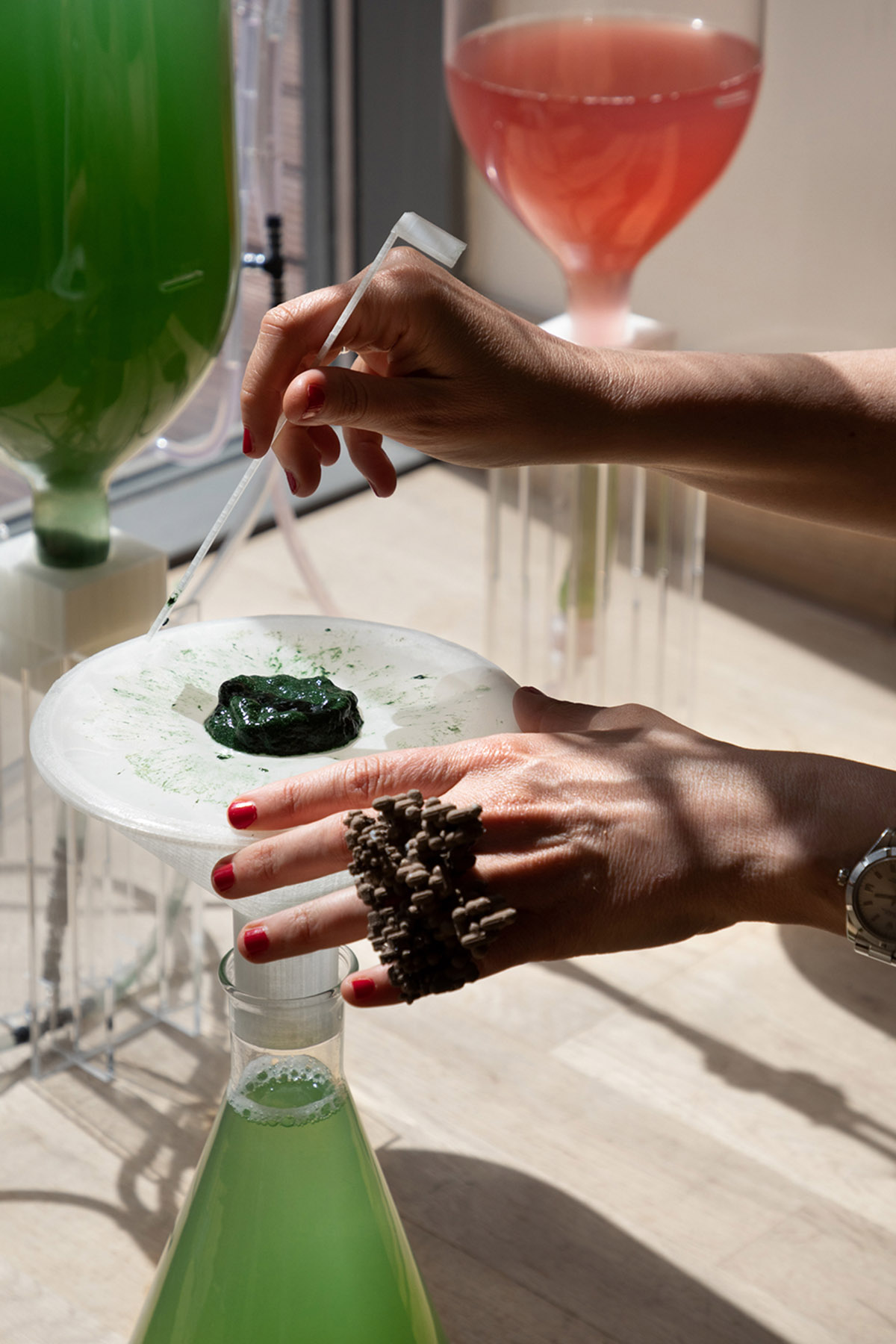 The photobioreactor absorbs the equivalent of two young trees in CO2 while producing the same amount of oxygen as seven indoor plants.

The harvest is a simple and entertaining process that can be performed several times per week, collecting up to seven grams of Spirulina per day (one tablespoon), which is the daily recommended intake for a family of four. 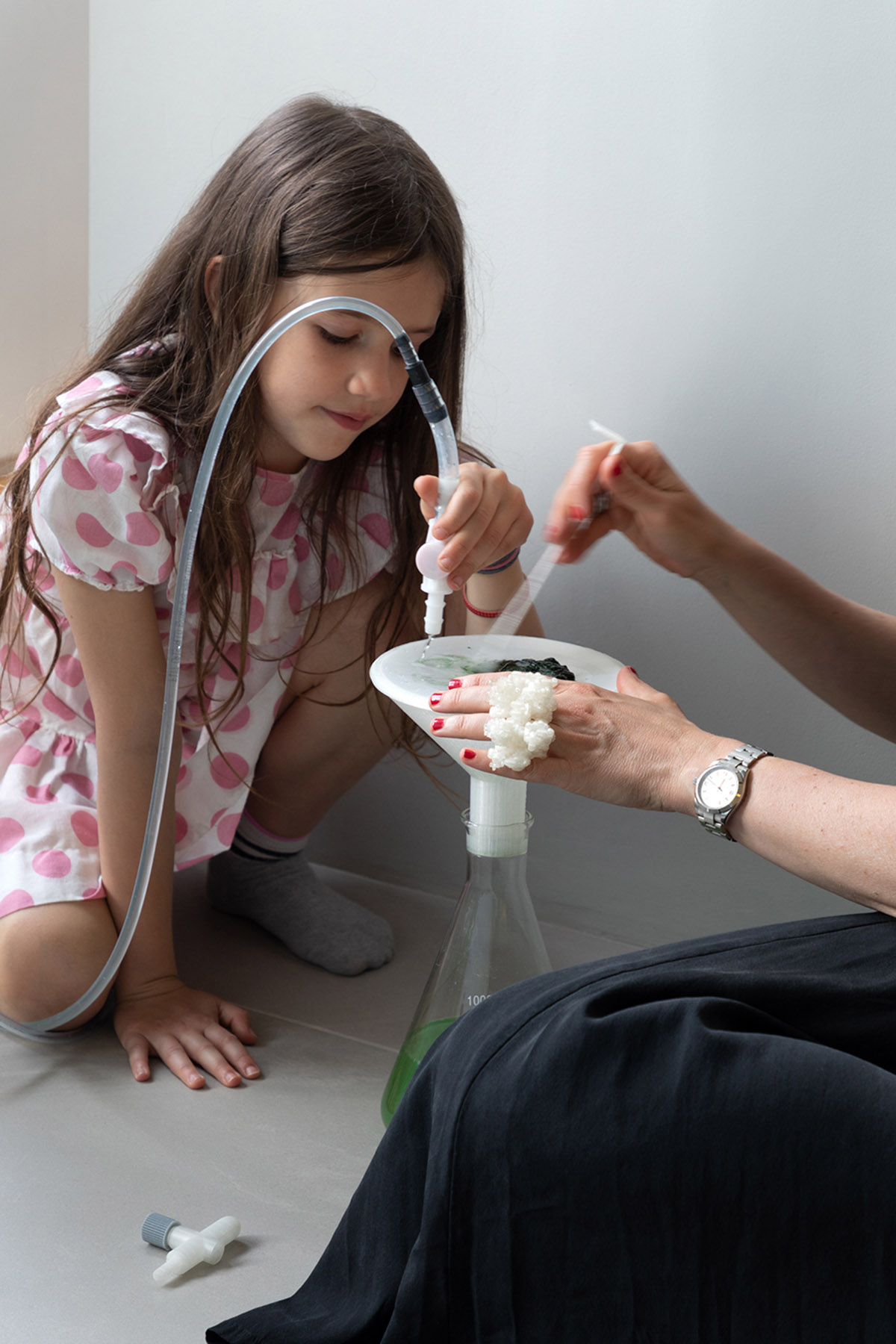 BioBombola can be easily assembled and dismantled, with zero waste, during the production, assembly and dismantling phases.

The photobioreactor adapts to any environment and any ceiling height, and it should be installed in a spot with direct sunlight or next to a grow lamp. 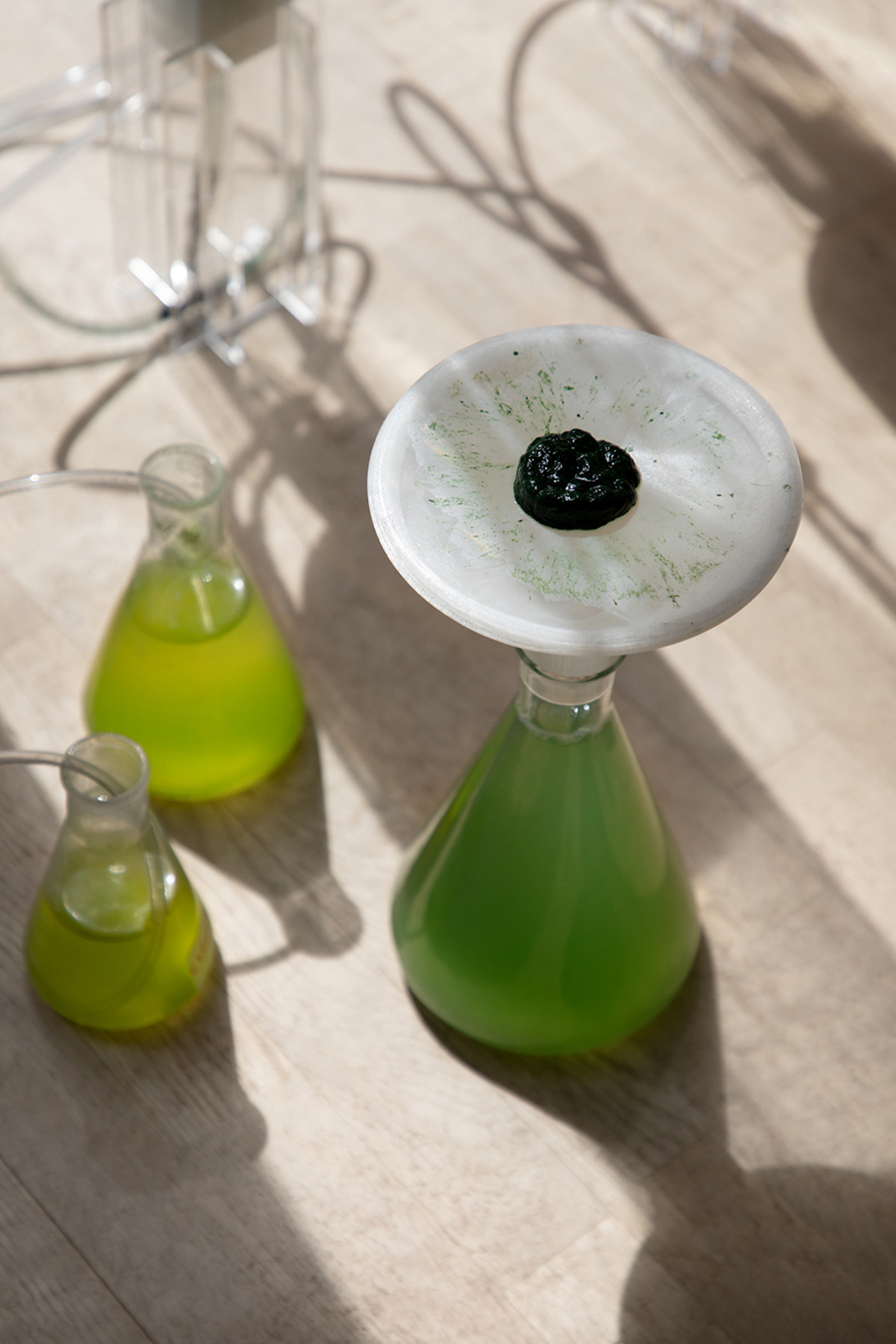 The project explores a visual and tactile way to introduce high-tech cultivation into the urban context by encouraging direct interaction with city-dwellers’ everyday lives. 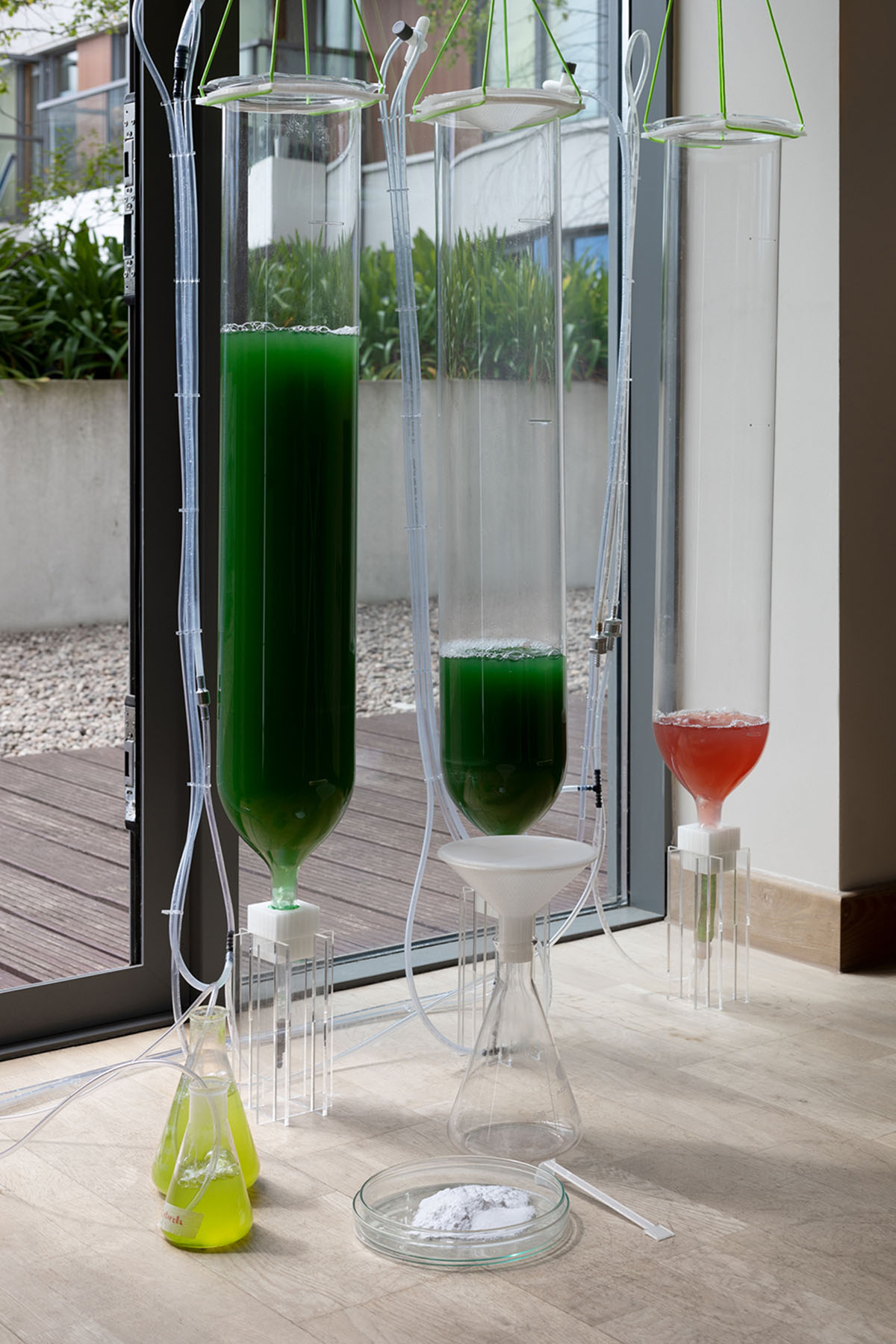 "We believe that this product will contribute to re-design some of the logic that led us to the current health crisis," said Claudia Pasquero and Marco Poletto.

"If we, collectively, transform air pollutants into highly nutritious aliments there will be fewer opportunities for viruses to exploit unsustainable food supply chains and for polluted atmospheres to reach and attach to us," added Pasquero and Poletto. 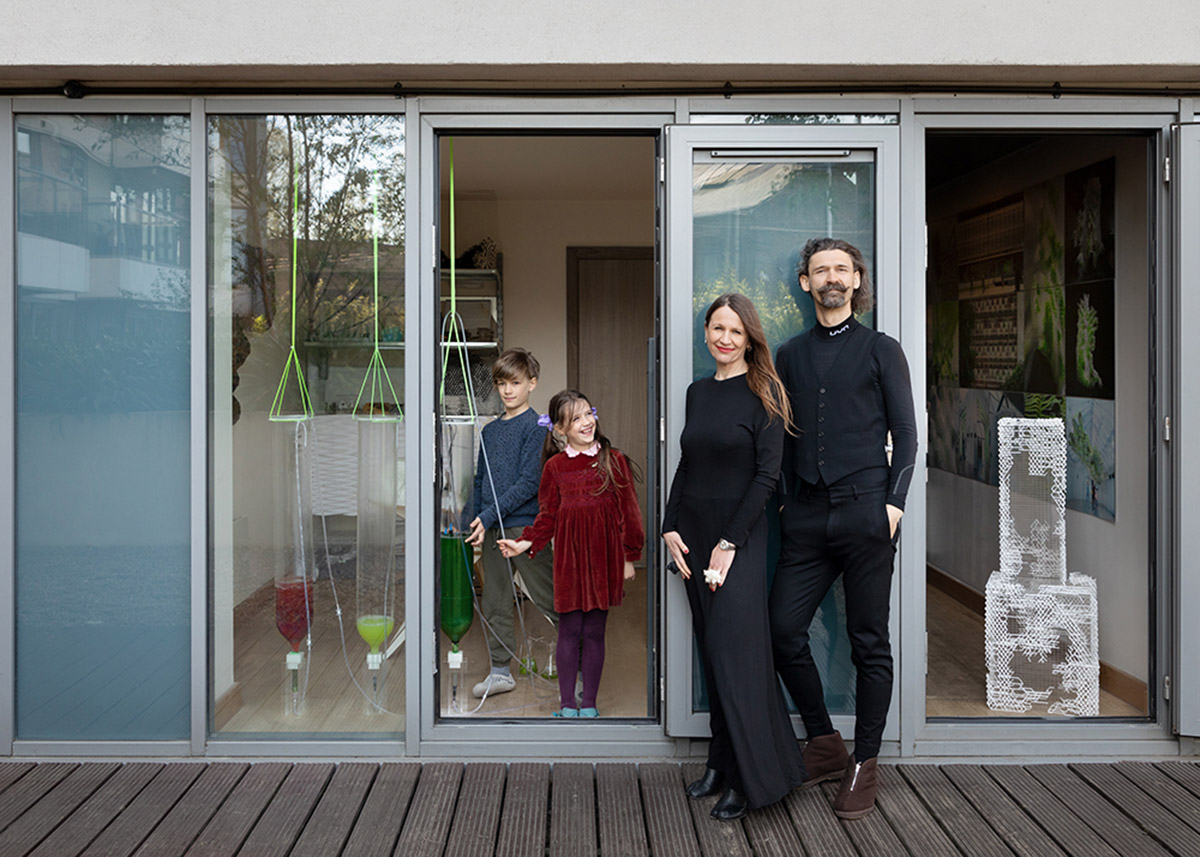 ecoLogicStudio is an architectural and urban design practice dedicated to bio-digital design for the definition of a new "ecology" of space and behavior.

Founded in London in 2005 by Claudia Pasquero and Marco Poletto, the office has earned an international reputation for its innovative work on "systemic” design – a method defined by the combination and integration of systemic thinking, computational design, biotechnology and prototyping.

The studio previously designed a bio-digital urban curtain that fights global climate change and two bio-digital sculptures that explore the future forms of spatial intelligence in an exhibition at the Centre Pompidou in Paris. 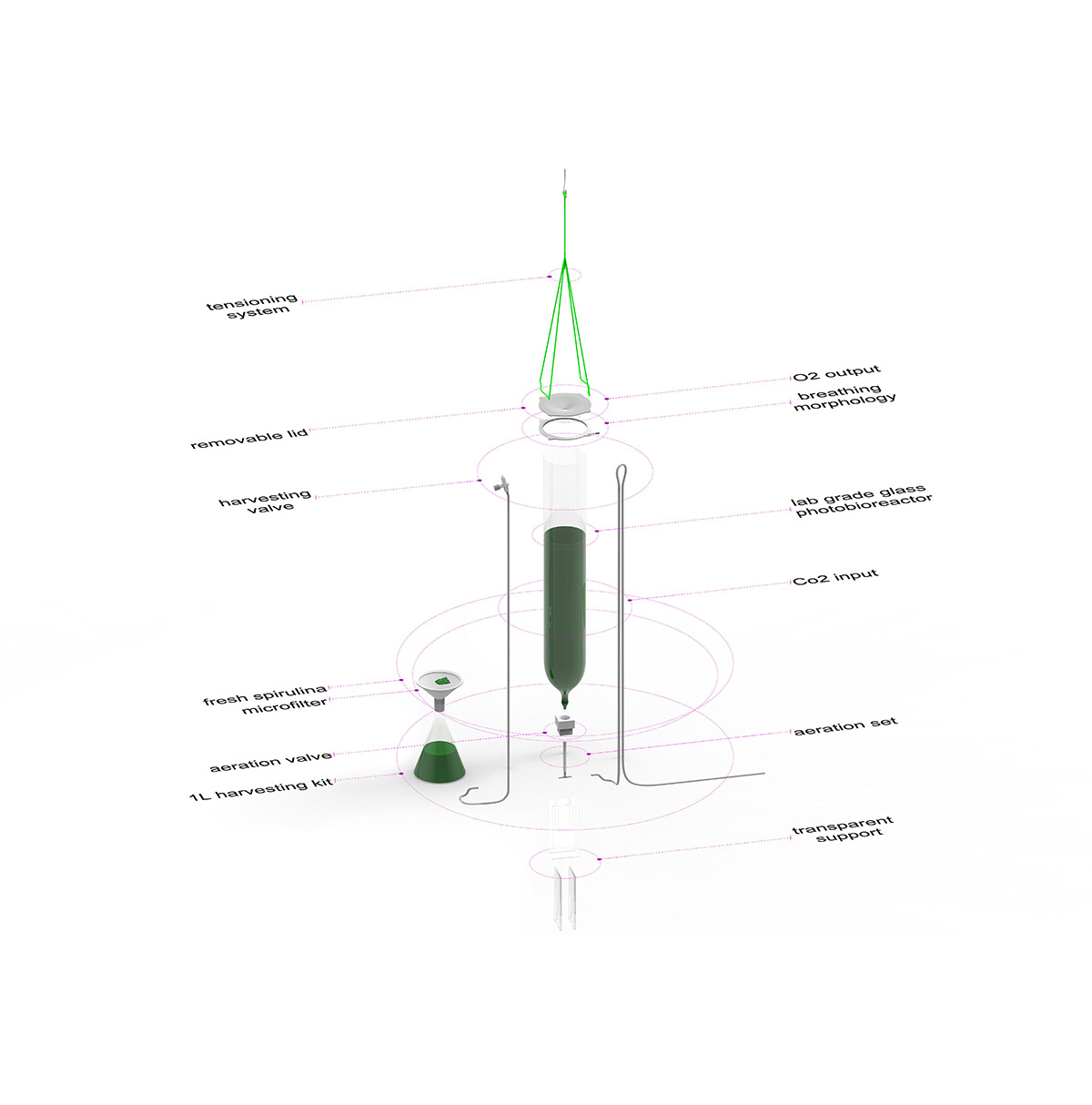 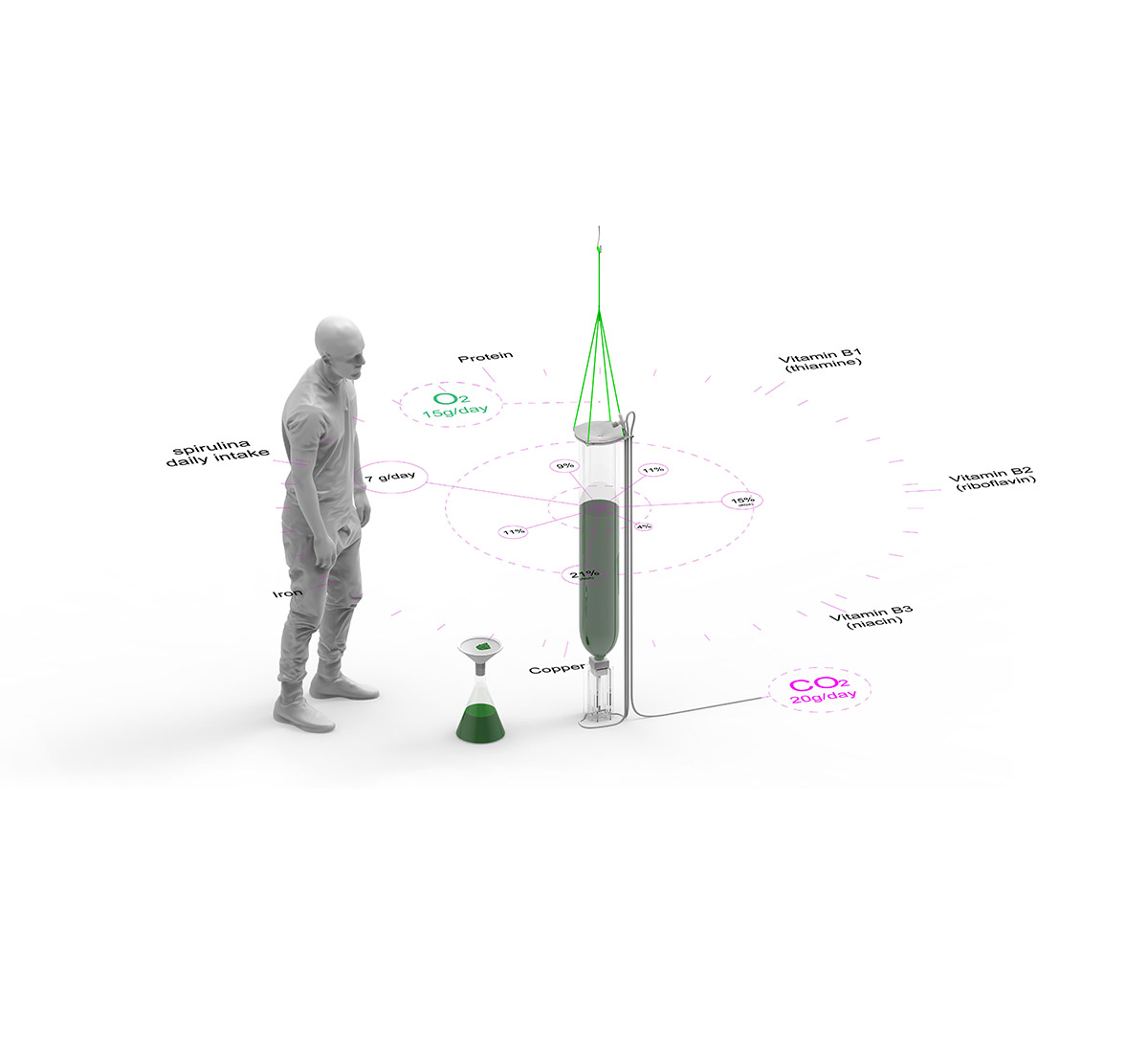 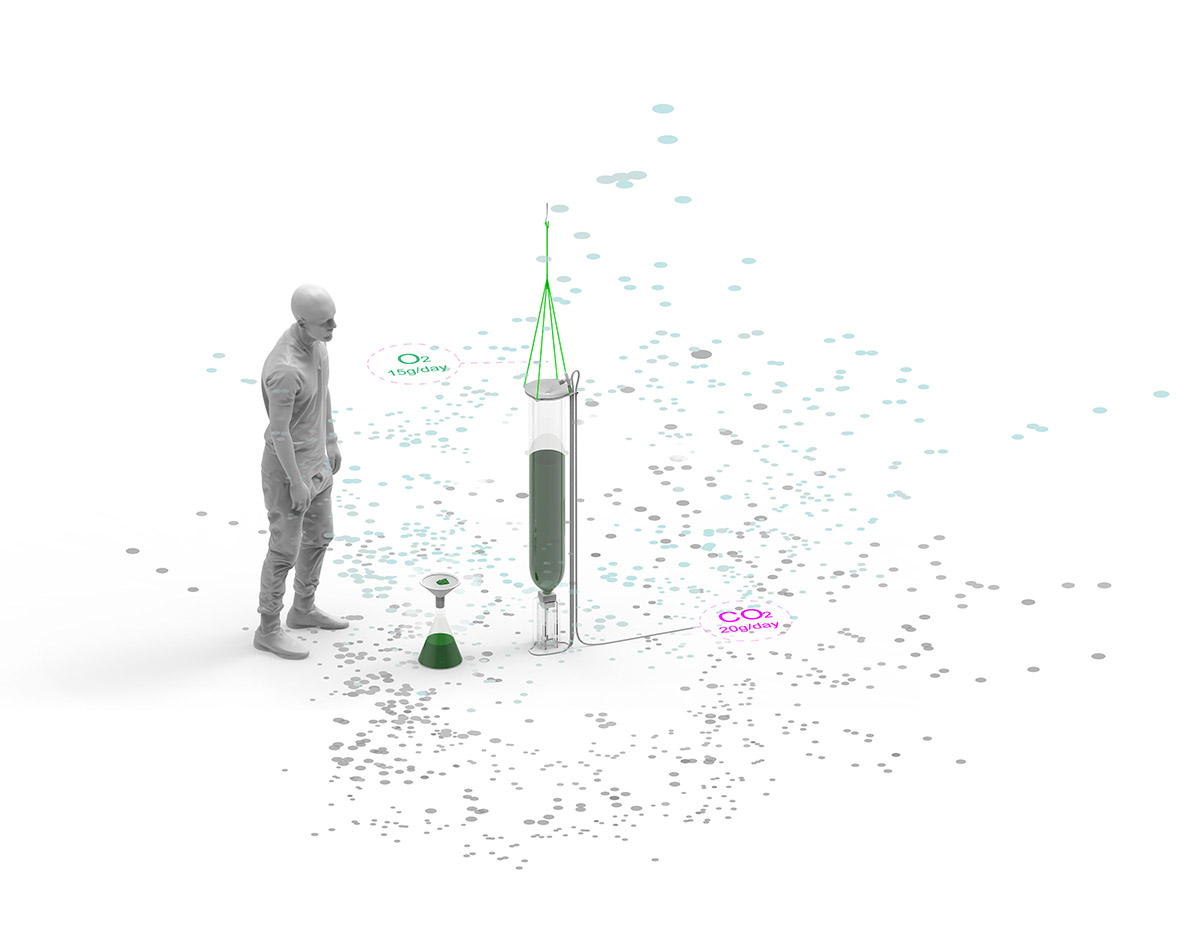 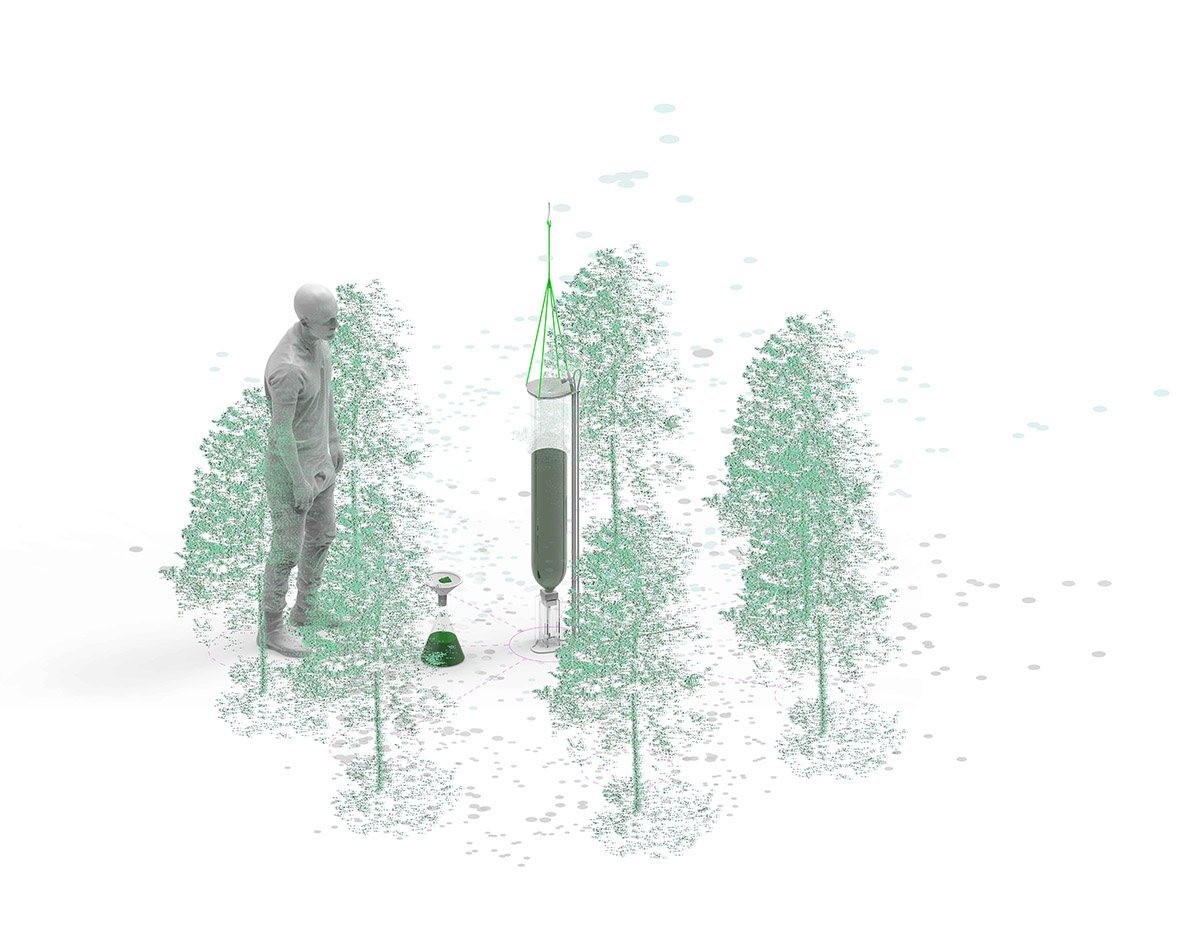 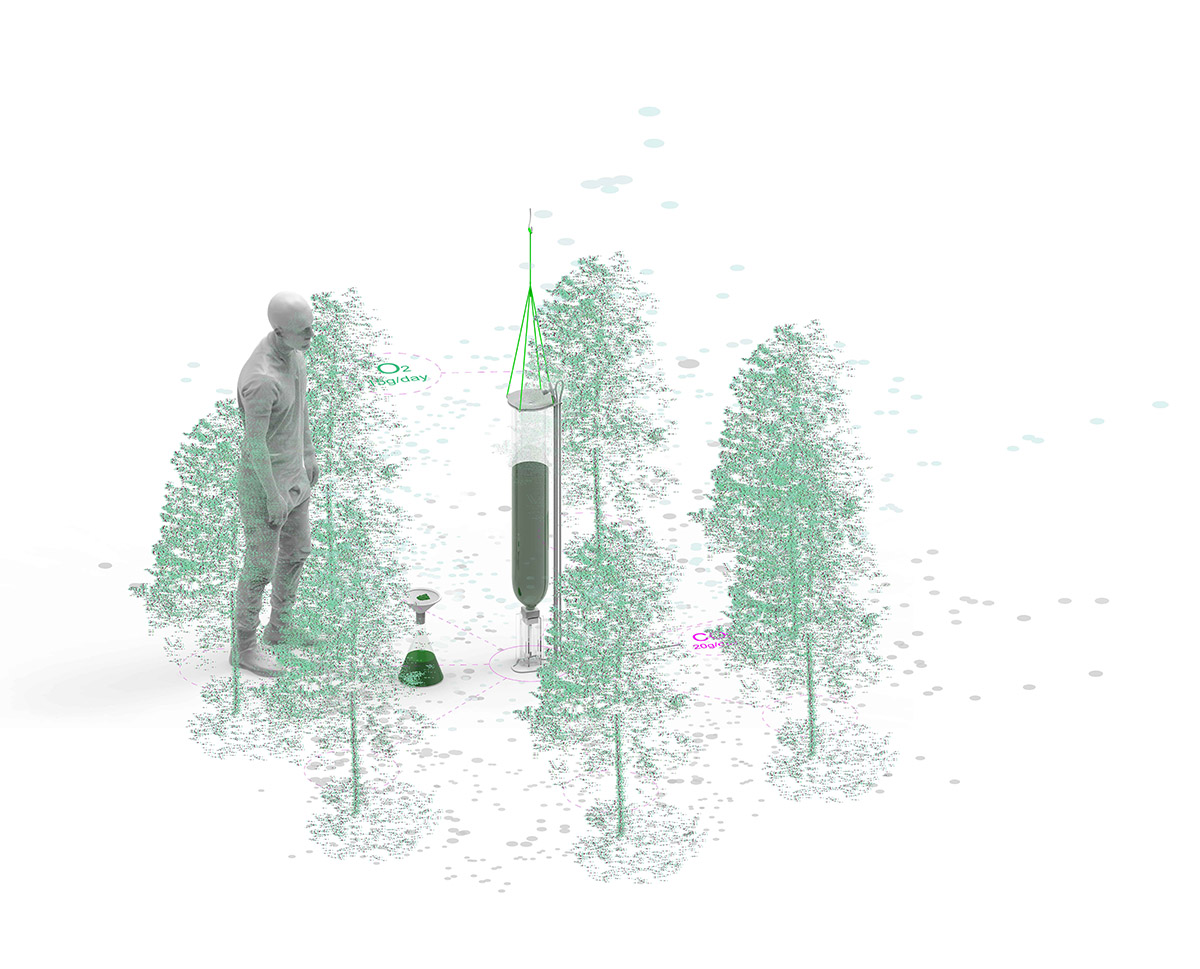 In a recent collaboration with UNDP, ecoLogicStudio has been testing the potential of Artificial Intelligence to develop Deep Green, a new green planning interface.

The team is also currently working on a Photo.Synth.Etica curtain for post-pandemic adaptation of retail and commercial environment.

Moreover, ecoLogicStudio has been selected by COS for a project for their flagship public art programme at the Milan Design Week and is continuing a partnership with the pharmaceutical industry for the development of urban health projects to improve polluted public realms.