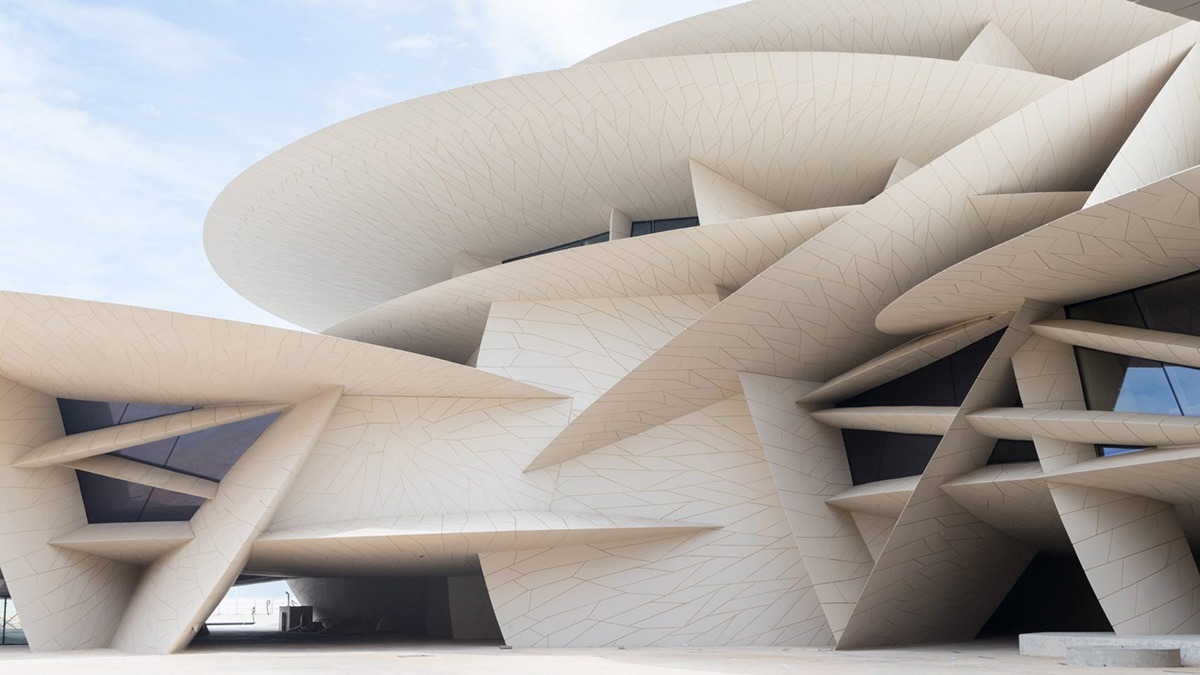 Pritzker Prize-winning architect Jean Nouvel's hotly-anticipated National Museum of Qatar has finally opened its doors to the public today in Doha desert. Taking inspiration from the desert rose growing out of the ground, the architect designed a museum comprised of a series of interlocking discs - having various dimensions and sizes - to create different internal spaces and perspectives.

Jean Nouvel's firm Ateliers Jean Nouvel started construction on the project in 2010, now after more than a decade, the 52,000-square-metre building has been completed and opened to the public.

The museum was originally scheduled to open in 2015 but due to a minor fire exploded near the site of the new museum, some detailed facilities on the construction site and the installation of art pieces delayed the opening of the museum till now.

The immersive and experiential NMoQ is designed to tell the story of Qatar and its people from more than 700 million years ago through to today, giving voice to Qatar’s rich heritage and culture and expressing a vibrant community’s aspirations for the future. 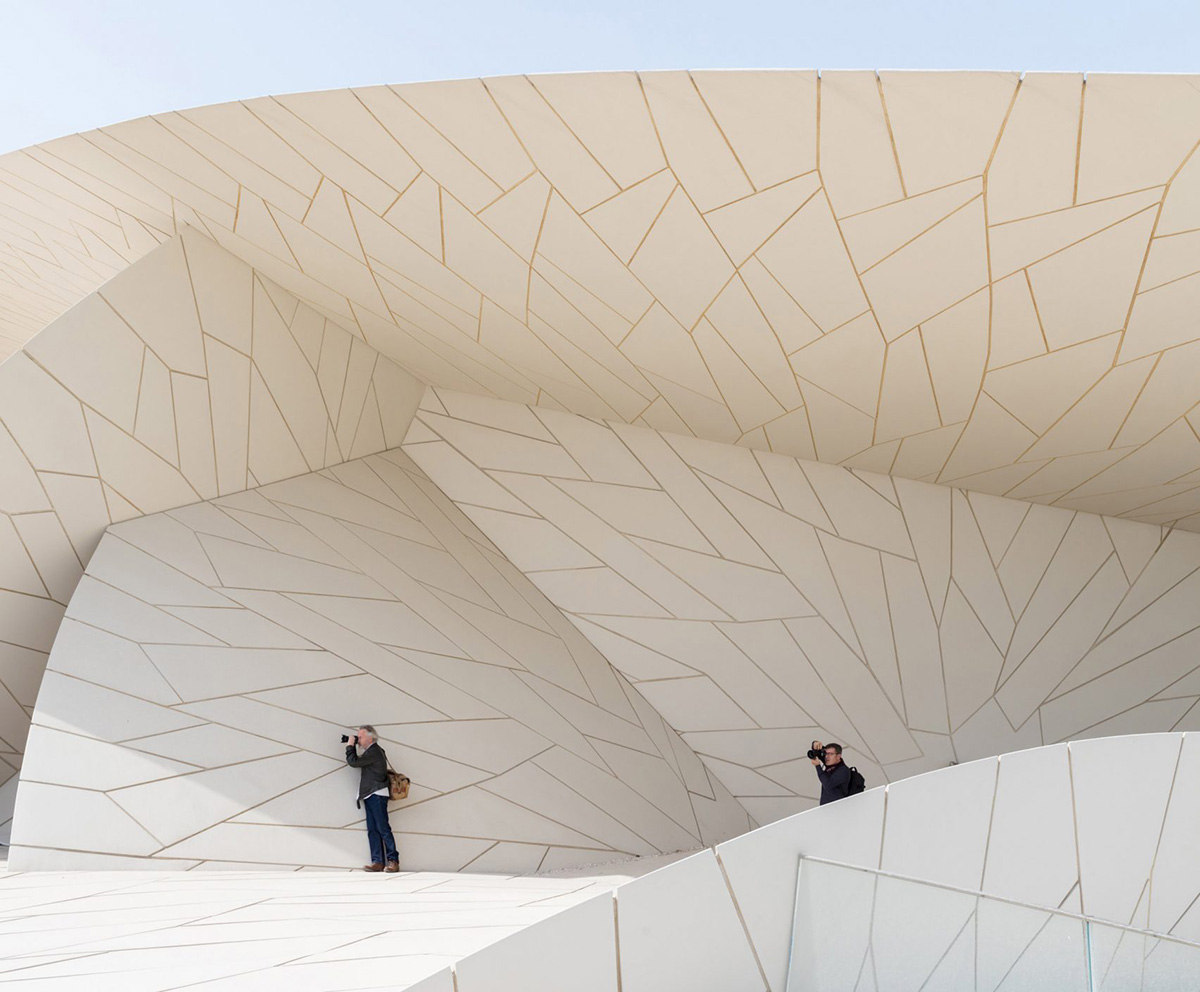 The new museum embraces, as its centerpiece, the restored historic Palace of Sheikh Abdullah bin Jassim Al Thani (1880-1957), son of the founder of modern Qatar: a building that in former times was both the home of the Royal Family and the seat of government, and was subsequently the site of the original National Museum.

The structure presents an organic and fluid geometry as if it is rising from the ground, and these discs are scattered irregularly to create a new spatial organisation on a rectangular plot. 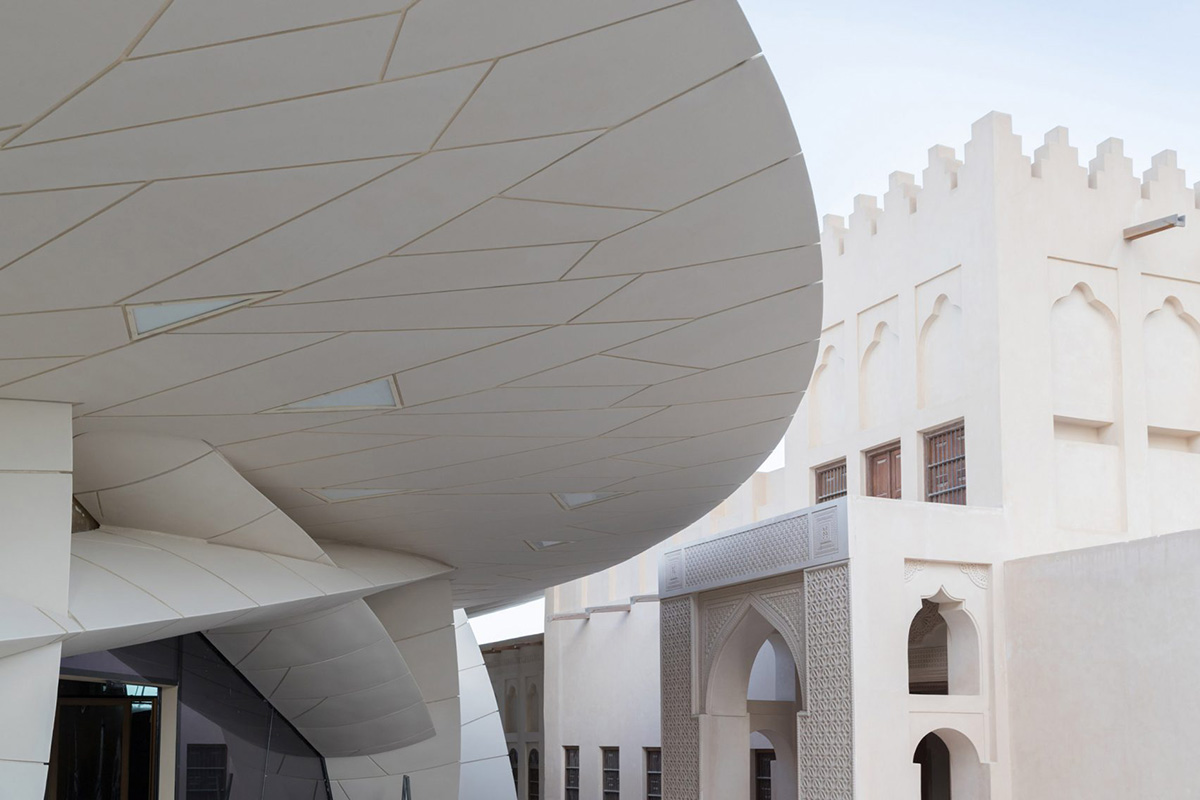 Nouvel's building incorporates the Palace while seamlessly integrating innovative artworks commissioned from Qatari and international artists, rare and precious objects, documentary materials, and interactive learning opportunities. The architect's fragmented architectural design echoes the geography of Qatar while evoking the history and culture of the nation. 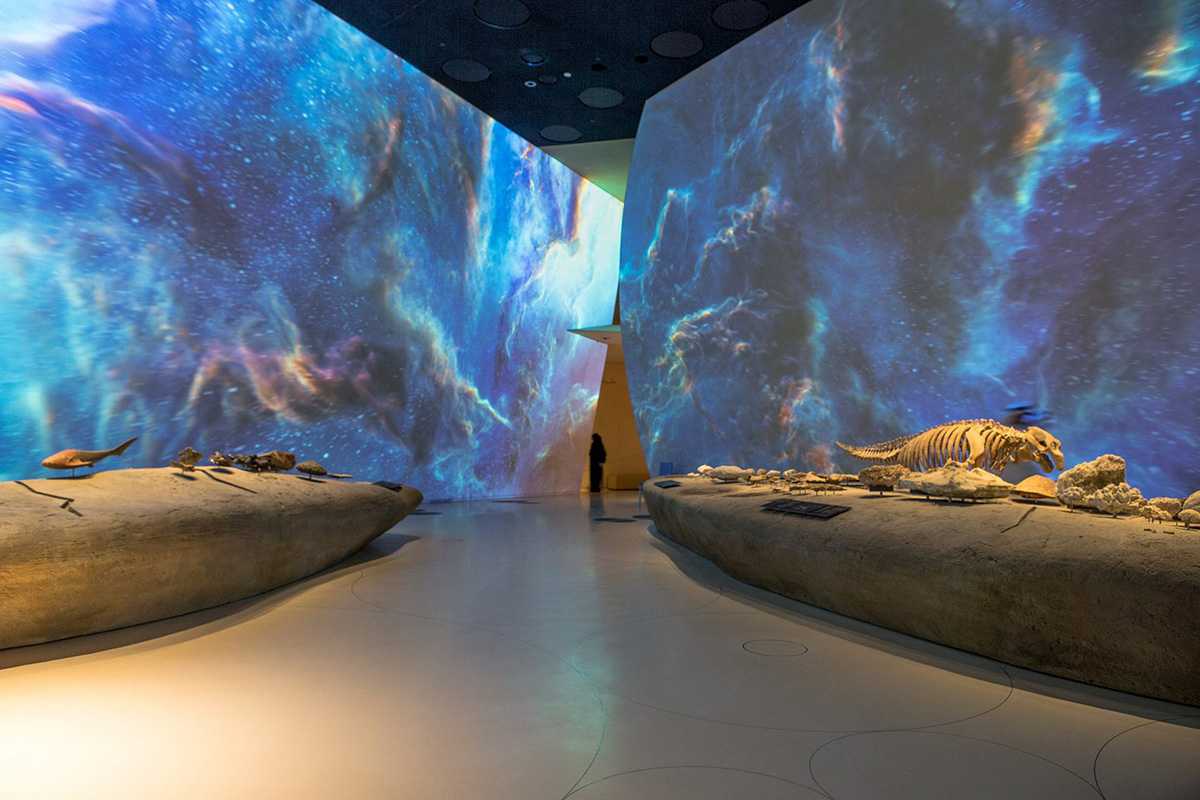 "Qatar has a deep rapport with the desert, with its flora and fauna, its nomadic people, its long traditions. To fuse these contrasting stories, I needed a symbolic element. Eventually, I remembered the phenomenon of the desert rose: crystalline forms, like miniature architectural events, that emerge from the ground through the work of wind, salt water, and sand," said Jean Nouvel.

"The museum that developed from this idea, with its great curved discs, intersections, and cantilevered angles, is a totality, at once architectural, spatial, and sensory," added Nouvel. 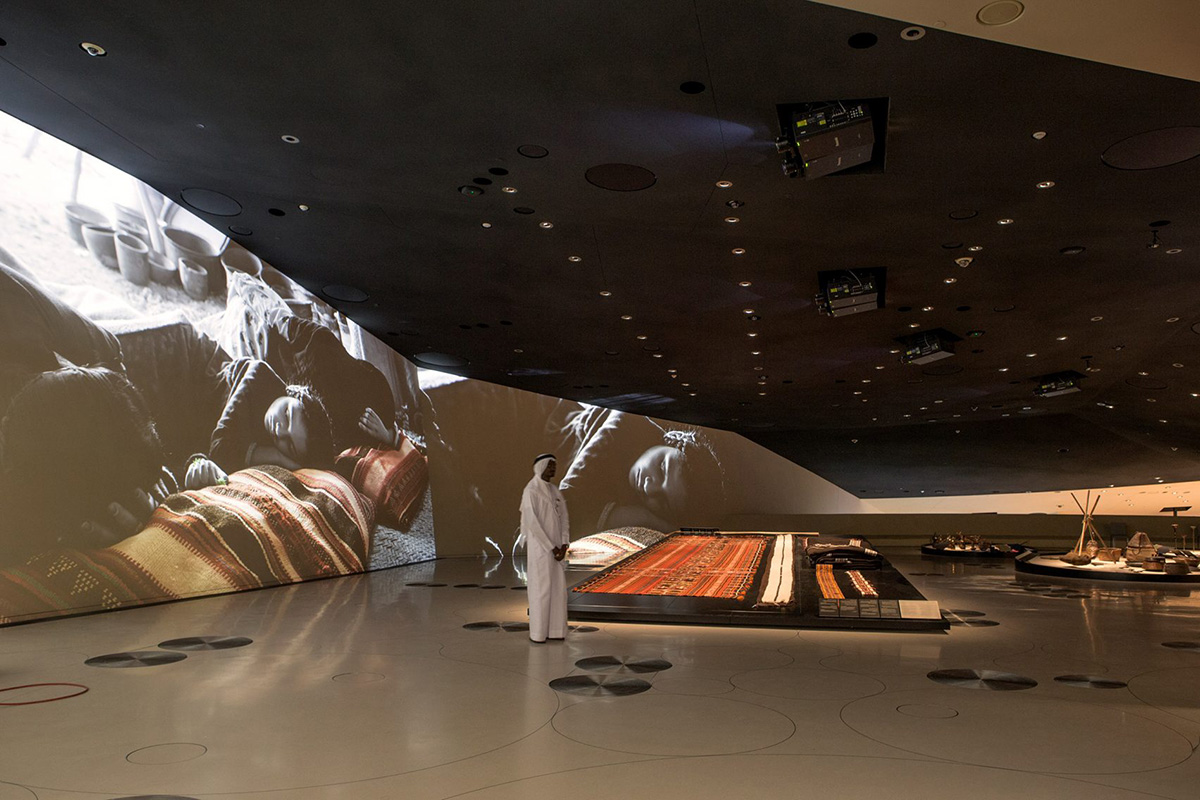 The National Museum of Qatar is organized in three "chapters"—Beginnings, Life in Qatar, and Building the Nation—presented in eleven galleries. The visitor’s chronological journey, which extends through more than 1.5 km of experiences, starts in the geological period long before the peninsula was inhabited by humans and continues to the present day.

The route passes through a succession of impressive, remarkably shaped volumes until it reaches its culmination in the very heart of Qatari national identity, the thoroughly restored Palace of Sheikh Abdullah. 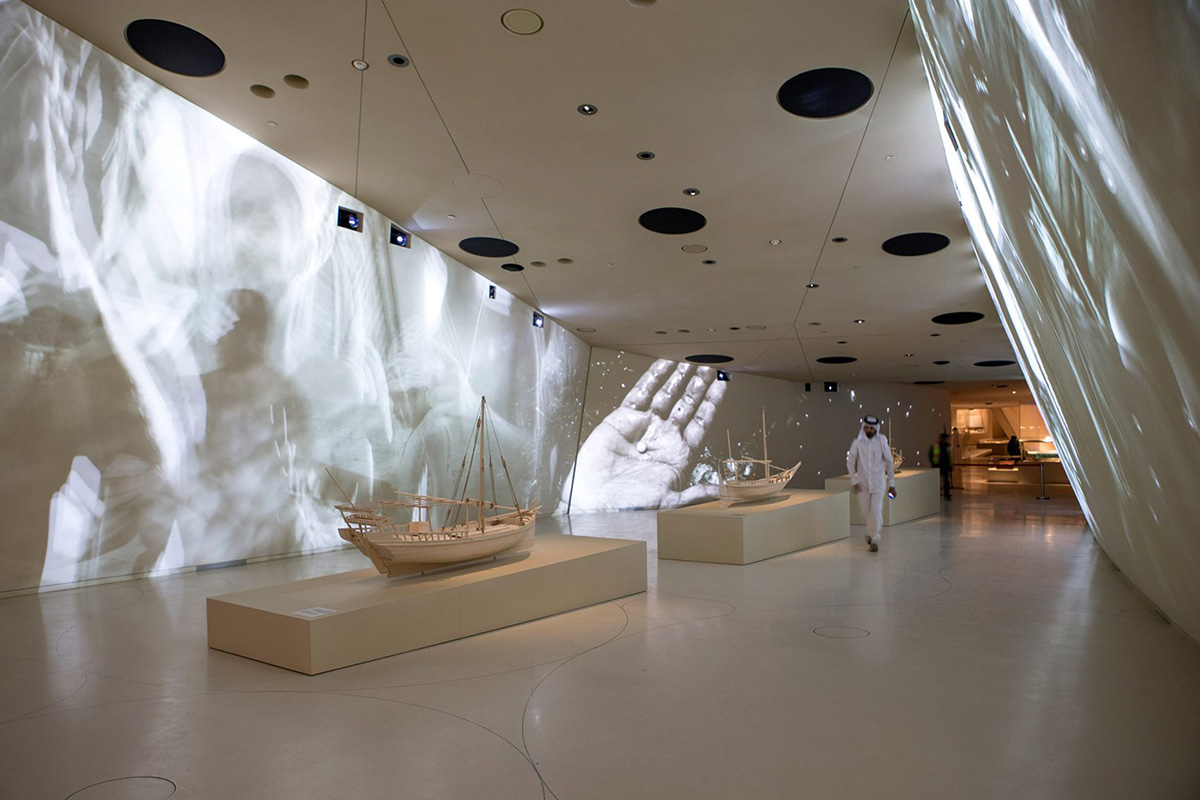 Each gallery is an all-encompassing environment, which tells its part of the grand story through a creative combination of elements such as music, storytelling, archival images, oral histories and evocative aromas.

Designed as distinctive experiences, these environmental galleries also contextualize an impressive array of archaeological and heritage objects, which include the renowned Pearl Carpet of Baroda—embroidered with more than 1.5 million of the highest quality Gulf pearls and adorned with emeralds, diamonds, and sapphires—as well as manuscripts, documents, photographs, jewelry, and costumes. 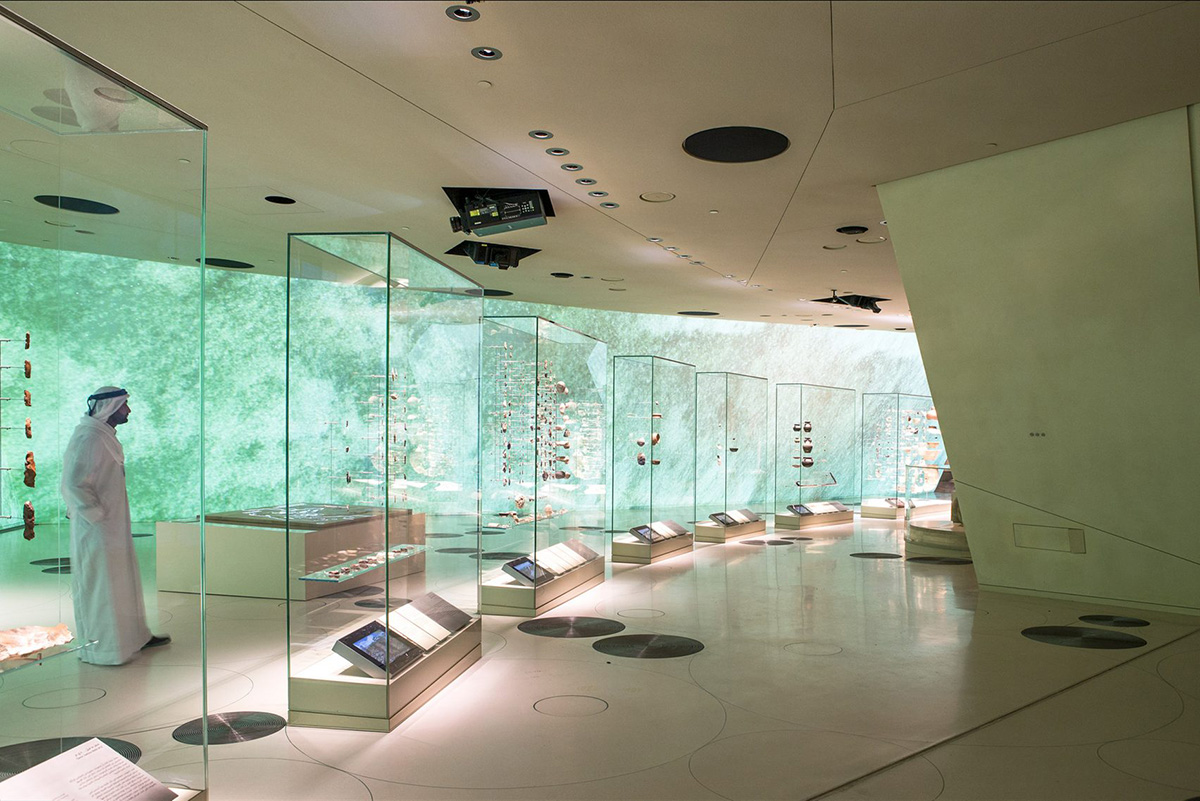 Both local and international artists have also been invited to create site-specific commissions, in response to the Museum’s collection and as an enhancement of the exhibition experience.

The 112,000-square-metre public park that surrounds the Museum, featuring family-friendly interactive learning environments, walkways, a lagoon, and more, is landscaped exclusively with drought- resistant native vegetation. This creates outdoor areas where children can learn through play and exploration, discovering crucial aspects of life in Qatar, in an echo of what they learn in the Museum itself. 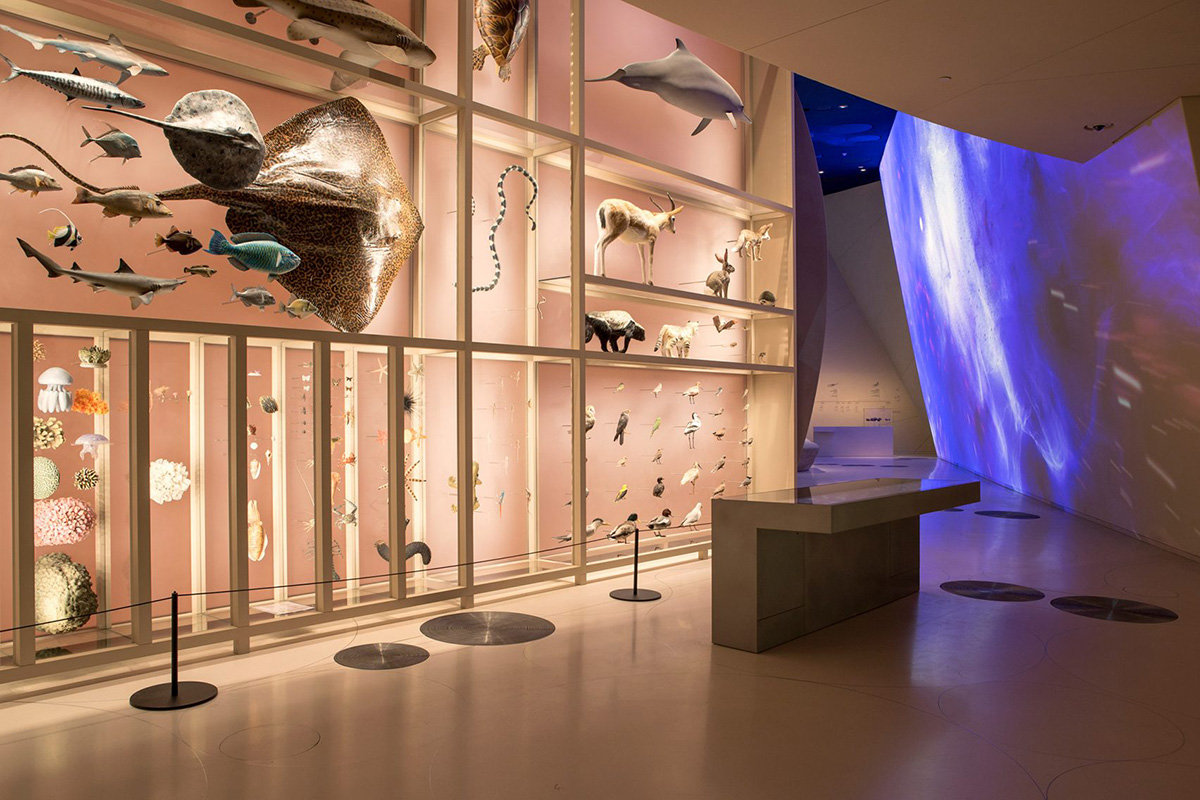 The form of the desert rose has inspired a building composed of large interlocking disks of different diameters and curvatures-some "vertical" and constituting supports, others "horizontal" and resting on other disks-which together surround the historic Palace like a necklace.

A central court, the Howsh, sits within the ring of gallery spaces and serves as a gathering space for outdoor cultural events. With its sand-colored concrete cladding, in harmony with the local desert environment, the building appears to grow out of the ground and be one with it. Shadows cast by the cantilevered disks help shelter visitors as they stroll around the outside, and also protect the interior from light and heat.

Like the exterior, the interior is a landscape of interlocking disks, in finishes that are neutral and monochromatic. The floors are sand-colored polished concrete with tiny mineral aggregates. The "vertical" walls are coated in stuc-pierre, or stone stucco, a traditional gypsum and lime- blended plaster. 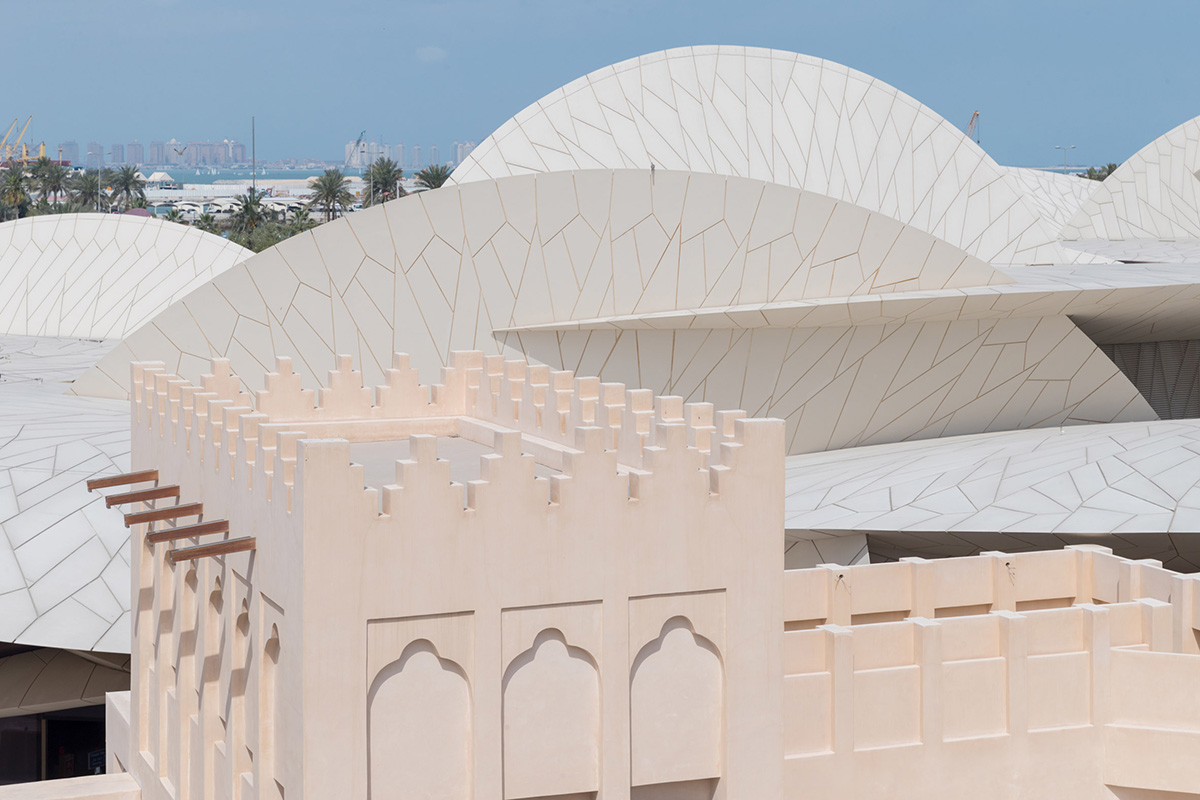 The remarkably varied interior volumes make each gallery different from the one before it, instilling a sense of adventure and surprise to the journey through the Museum. 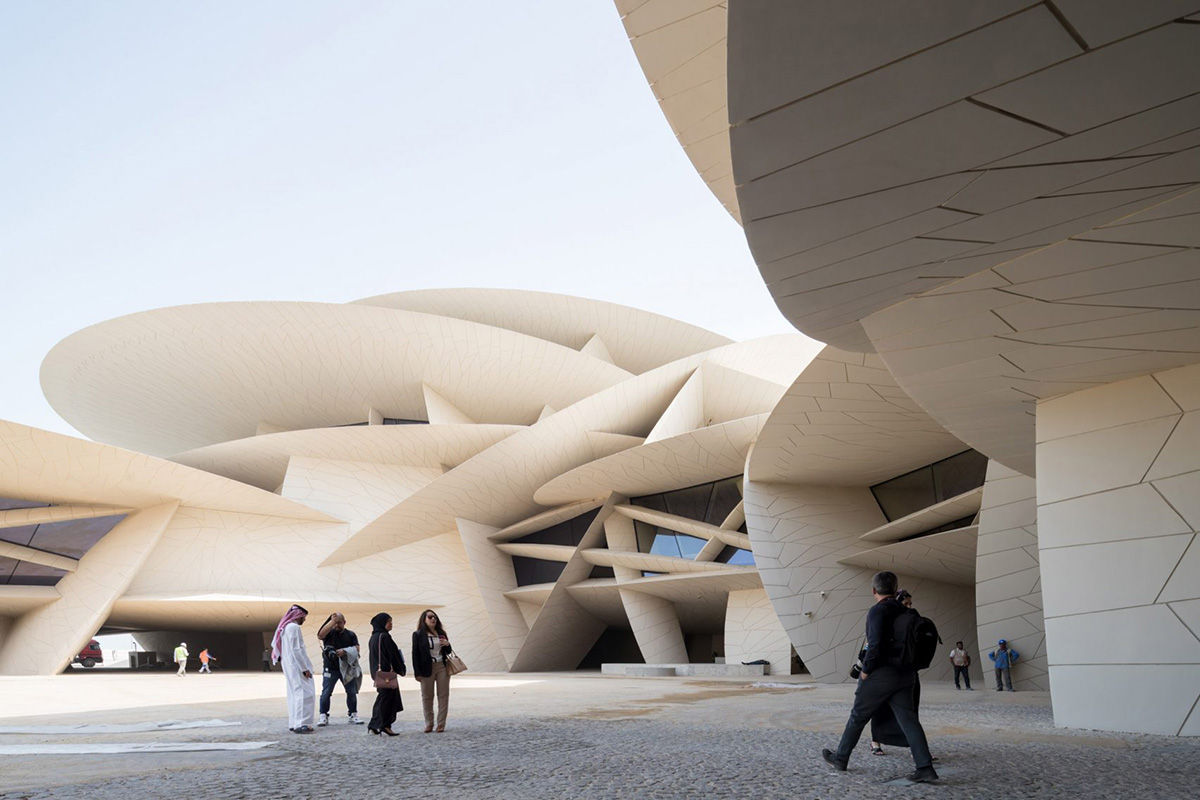 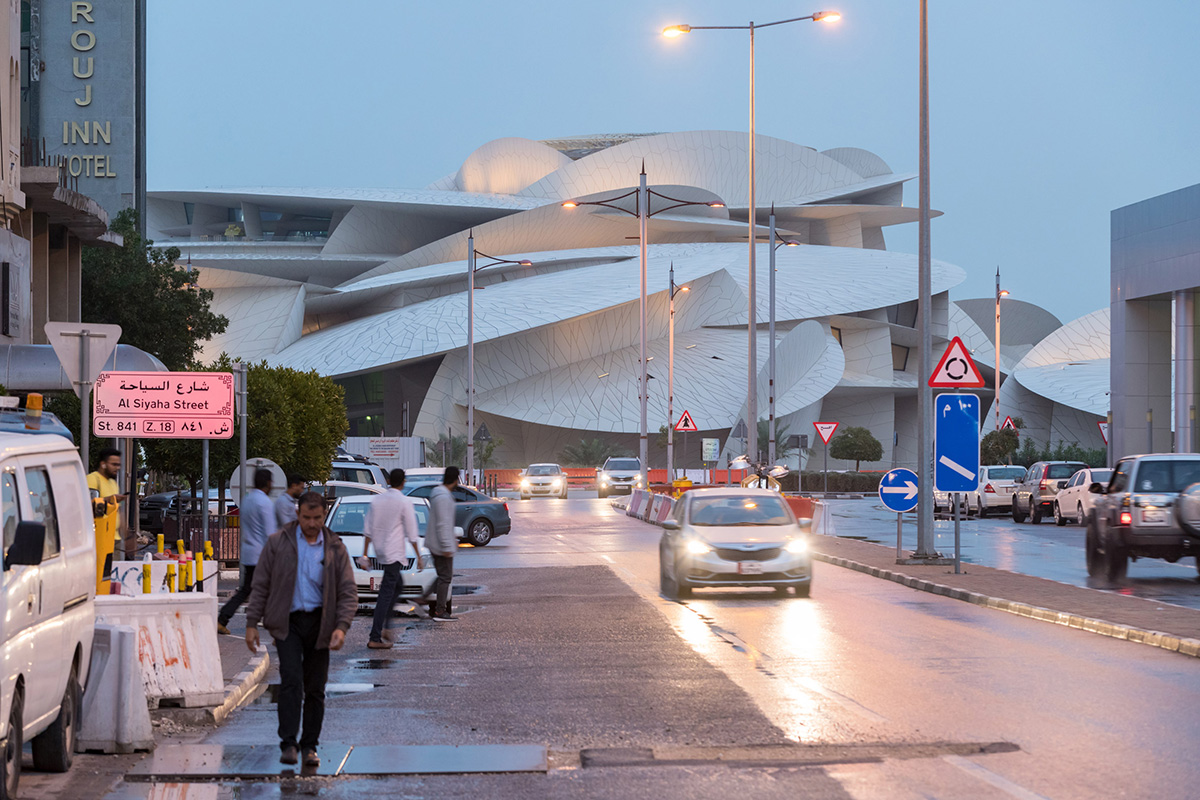 The sustainability of this design has qualified the National Museum of Qatar for a USGBC LEED Gold rating and GSAS 4 Stars. Among the sustainable features are buffer zones in the spaces between the disks to create thermal mass, reducing cooling loads. The heating and cooling systems are state-of-the-art. Steel and concrete, the main materials used, are locally sourced and/or made.