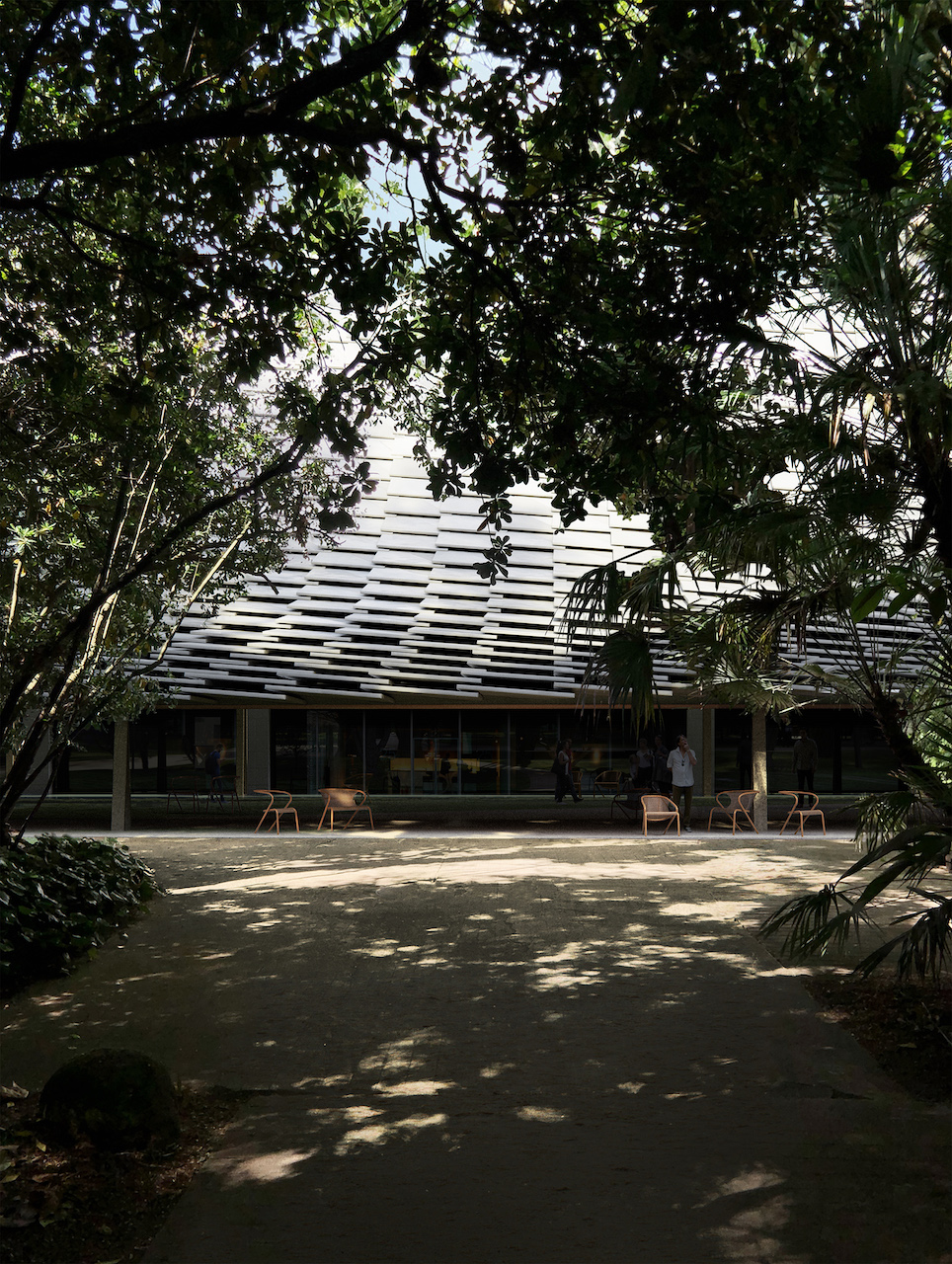 As a follow up to the Lisbon, the Portugal Gulbenkian Foundation expansion in WAC's previous article, WAC met with the Gulbenkian Foundation’s Head of Communications, Elisabete Caramelo and their Consulting Architect, Teresa Nunes da Ponte to chat in depth about the competition, the winning design and to take a look at a model of the proposed intervention.

On the occasion of the 150th anniversary of the birth of Calouste Sarkis Gulbenkian, the Foundation decided to launch an international competition for the expansion of the Gulbenkian Garden while creating ‘an opening’ into the city. The Garden project will make it possible to connect Rua Marquês da Fronteira (to the south) and Praça de Espanha[1] (to the north), thus creating a new green thoroughfare.

The Foundation launched an international by-invitation competition on 1 March 2019, and 12 well-known architecture studios were asked to, with their proposals address four key issues:

1. Provide a new entrance to the garden through the “Southern Vertex”, as an important alternative for public access to the main Museum Collection, the former Center for Modern Art (CAM), now the Modern Collection of the Gulbenkian Museum. and to the Park, the garden itself.

2. A new garden area that encourages a coherent integration with the existing garden, paying special attention to transition zones.

3. Provide an new access to the Modern Collection building, and through it to the Founder's Collection and other important spots in the garden, respectful of its character, without detriment of a clear contemporary language.

4. To trigger an expansion of the Modern Collection area and related junctions. 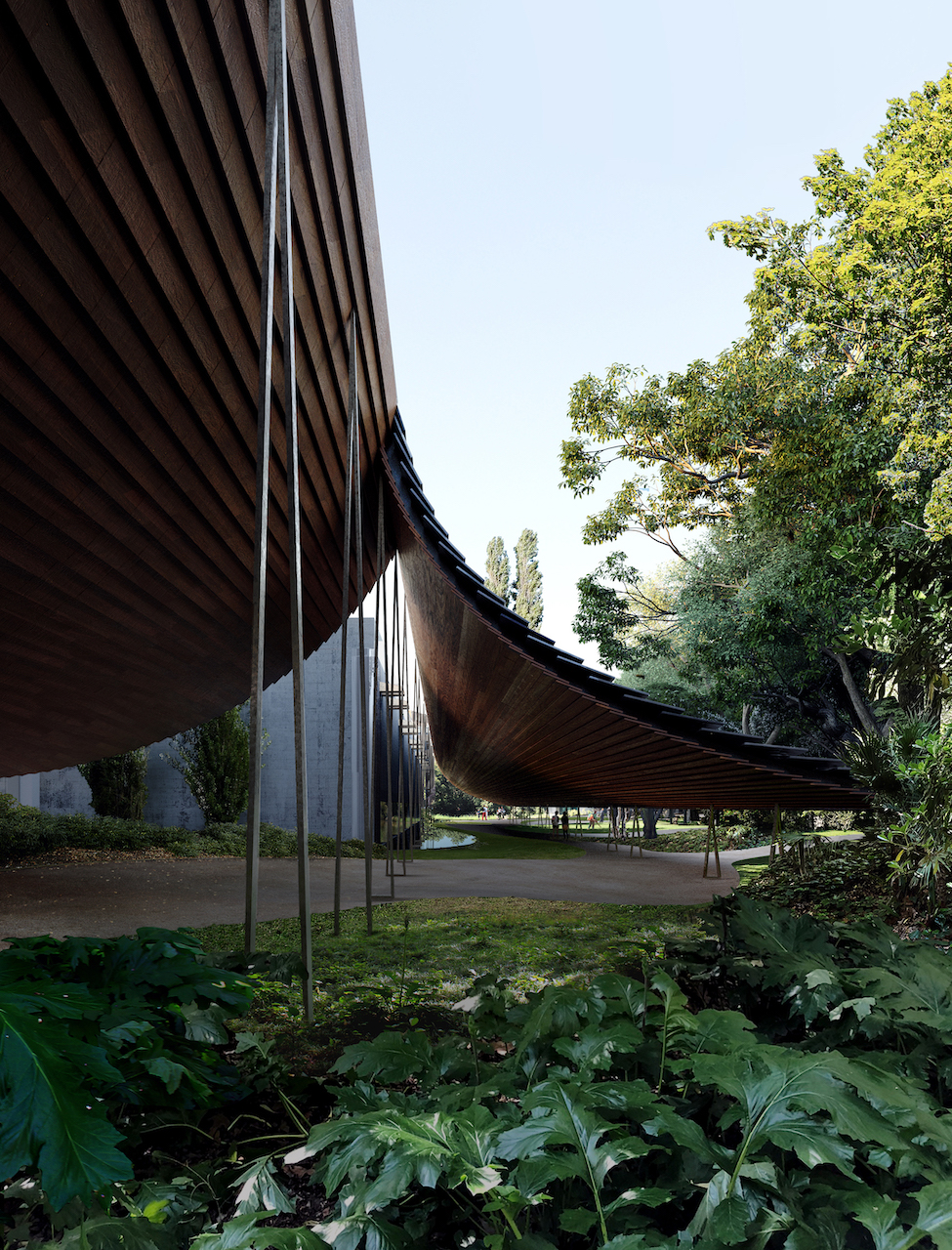 Mr. Kuma's proposal adds much value to the building and gardens by proposing a notably contemporary intervention, which focuses on the Gulbenkian garden enlargement towards the south Kengo Kuma and Associates, returning the remnant of the former Santa Gertrudes Park to the city (2).

Fully respecting the architectural value of the original Foundation structures, a very restrained intervention is proposed, integrated into the Modern Collection of the Gulbenkian Museum building without actually touching it thus, respecting its integrity. Subtle minor changes are proposed to solve specific problems such as pedestrian traffic and to bring natural light to the lower galleries maintaining the vocabulary of the Modern Collection building.

The proposed design adds two large wooden screens curving out next to the southern façade of the Modern Collection building, seemingly extending outward. The proposal creates a new social outdoor space that would appeal to a broad visitor audience for quiet contemplation and as a transitional element, one with a visual permeability that reinforces the original concept; the permanent relationship between the buildings and the garden, treated as a whole.

[1] Praça de Espanha is also the subject of an ambitious municipal urban intervention project which WAC aims to feature shortly.

[2] The Santa Gertrudes Park area is part of the Foundation expansion, except a house and its patio which belongs to the Eugenio de Almeida Foundation. and thus are not part of the Gulbenkian intervention.

All images © Luxigon, courtesy of Kengo Kuma and Associates.