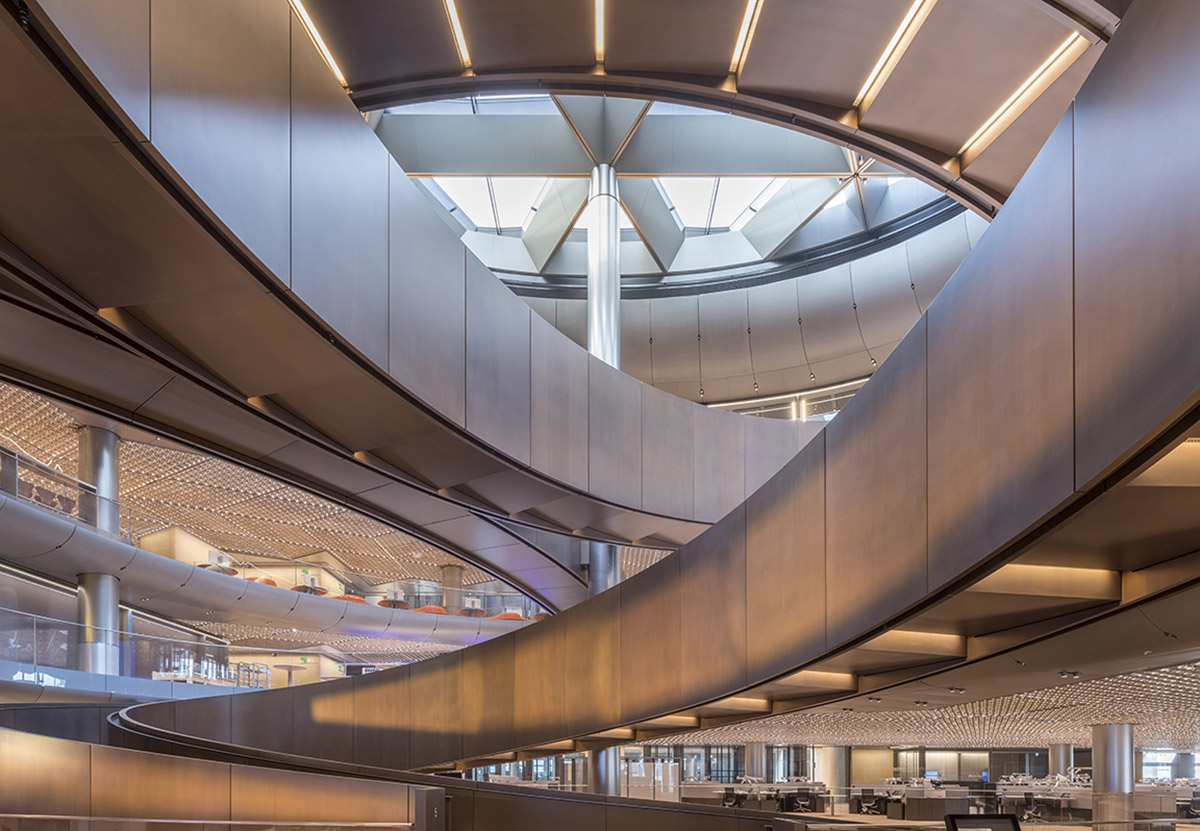 Foster + Partners has completed Bloomberg's new headquarters in London, which is conceived as a true exemplar of sustainable office of the world as it received BREEAM's outstanding rating – the highest design-stage score ever achieved by any major office development. The building, covering the 3,3 acre site, is located between the Bank of England and St Paul’s Cathedral, responding to its historic context, yet is uniquely of its place and time. Occupying a full city block, the site comprises two buildings united by bridges that span over a pedestrian arcade that reinstates Watling Street, an ancient Roman road that ran through the site.

Bloomberg Arcade is now a key route for people moving around the City, with restaurants and cafes at ground level, set back behind an undulating façade under a covered colonnade. Three public plazas, located at each end of the arcade and in front of the building’s entrance, provide new civic spaces in the heart of the Square Mile. 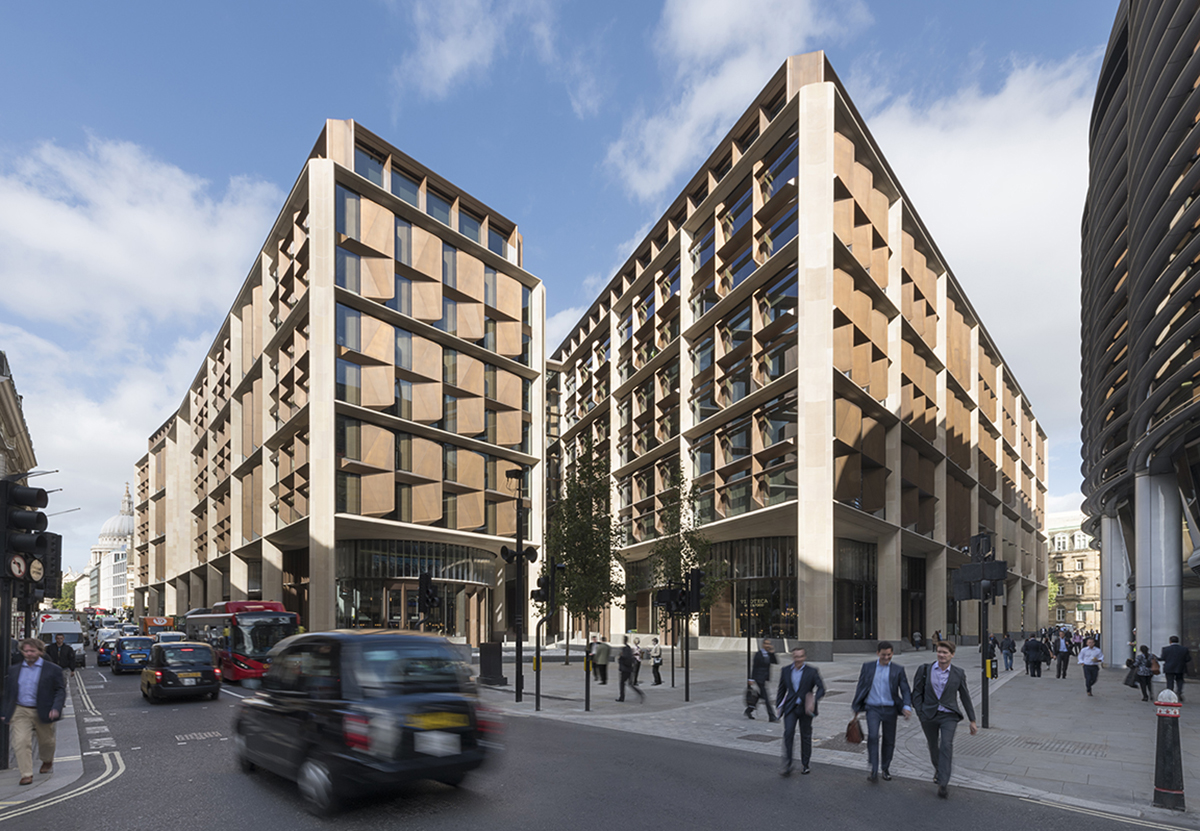 The building height protects key views of St Paul’s Cathedral whilst respecting neighbouring historic buildings. The building's striking façade is defined by a structural sandstone frame in response to the adjacent Magistrate’s Court, with a series of large-scale bronze fins that shade the floor-to-ceiling glazing. 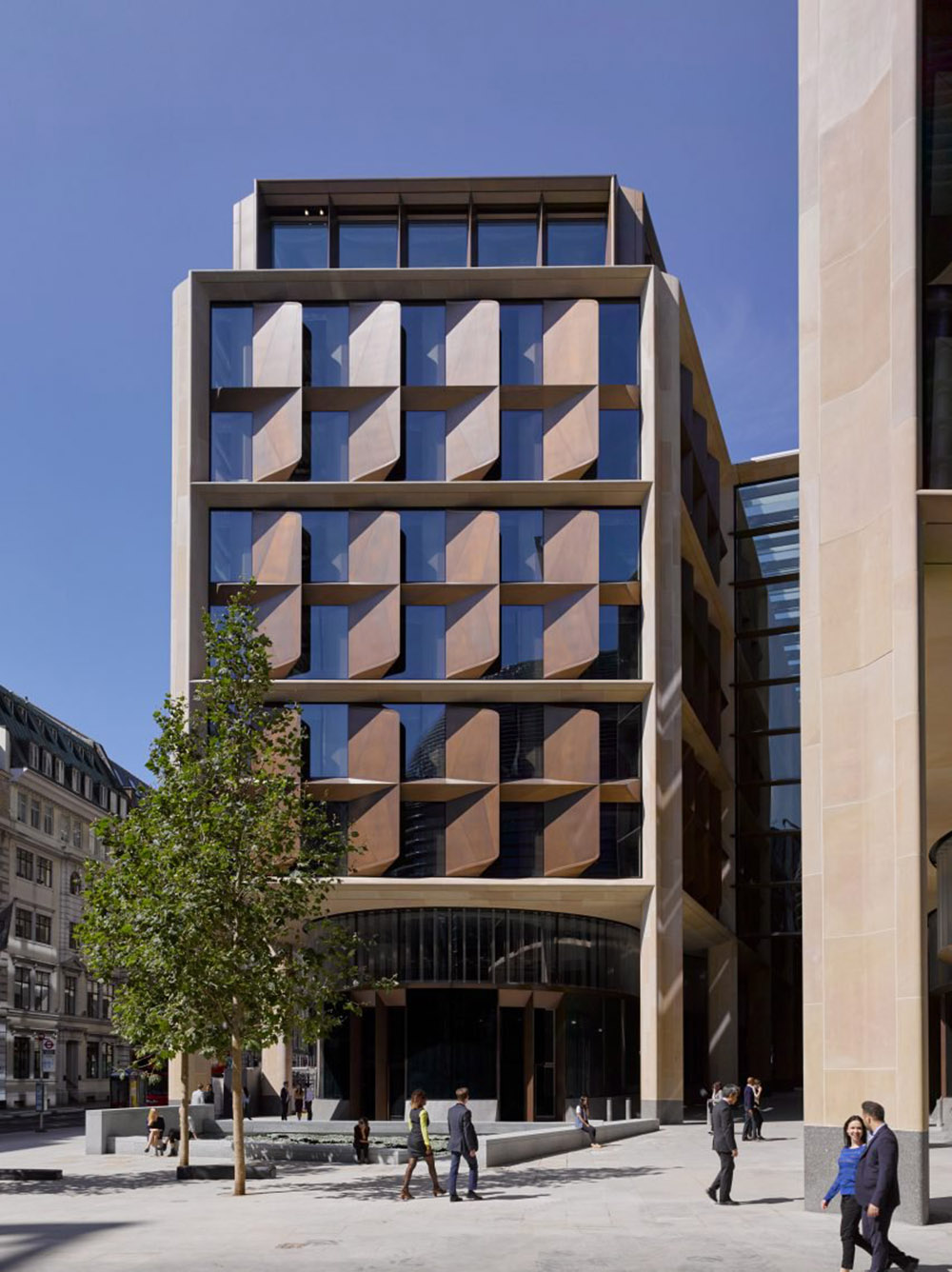 "The fins give the building a visual hierarchy and rhythm as they vary in scale, pitch and density across each façade according to orientation and solar exposure, whilst also being an integral part of the building’s natural ventilation system," said Foster + Partners.

"From day one, we talked with Mike Bloomberg about creating an elegant stone building that responds to its historic setting yet is clearly of its own time and which would be a good neighbour in the City of London in every sense of the word. We wanted the building to have an integrity and continuity of expression both inside and out, creating an inspiring, innovative, dynamic and collaborative workplace for Bloomberg that embodies the core values of the company," said Lord Foster, Founder and Executive Chairman, Foster + Partners.

"Above all, we had a shared belief with Bloomberg that we should provide the highest standards of sustainability and wellbeing for its occupants, as well as create major new public spaces at ground level, making a significant contribution to the daily life of the City of London and its inhabitants," he added. 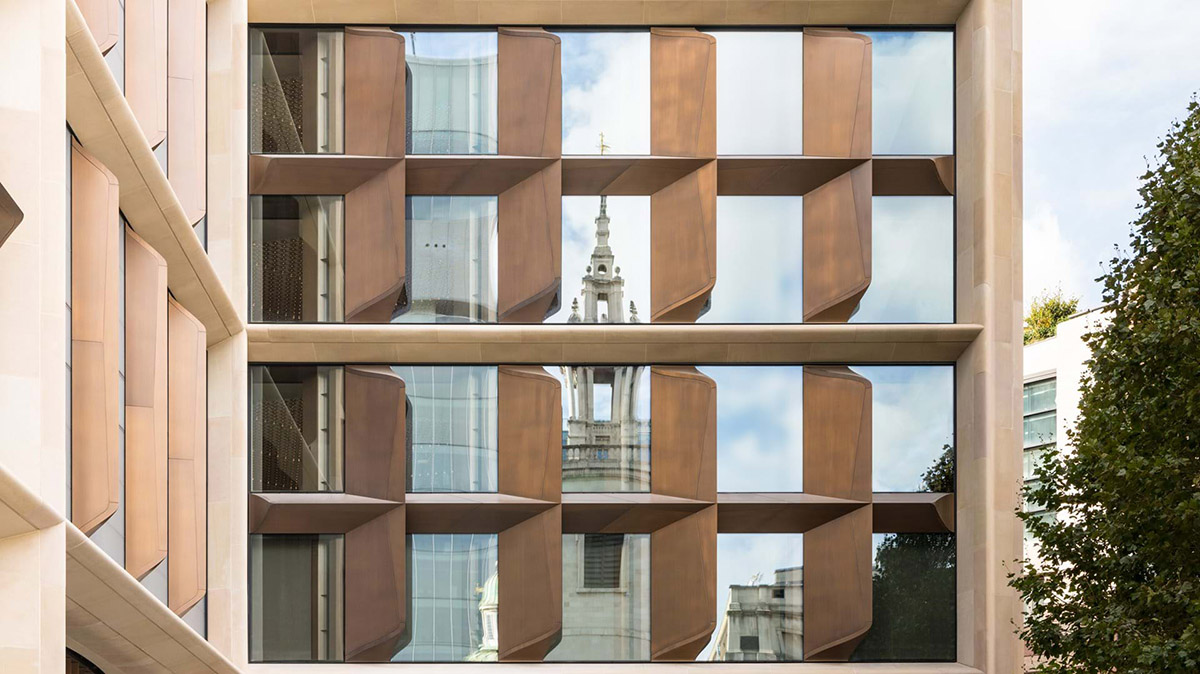 Foster + Partners combines the structure with art pieces playing a central role in the project, with major site-specific commissions in and around the building.

Cristina Iglesias’ water sculpture in three parts, "Forgotten Streams" – a homage to the ancient Walbrook River that once flowed through the site – defines the public spaces at each end of Bloomberg Arcade. Other works in the building include pieces by Michael Craig-Martin, Olafur Eliasson, Arturo Herrera, Langlands and Bell, David Tremlett and Pae White. 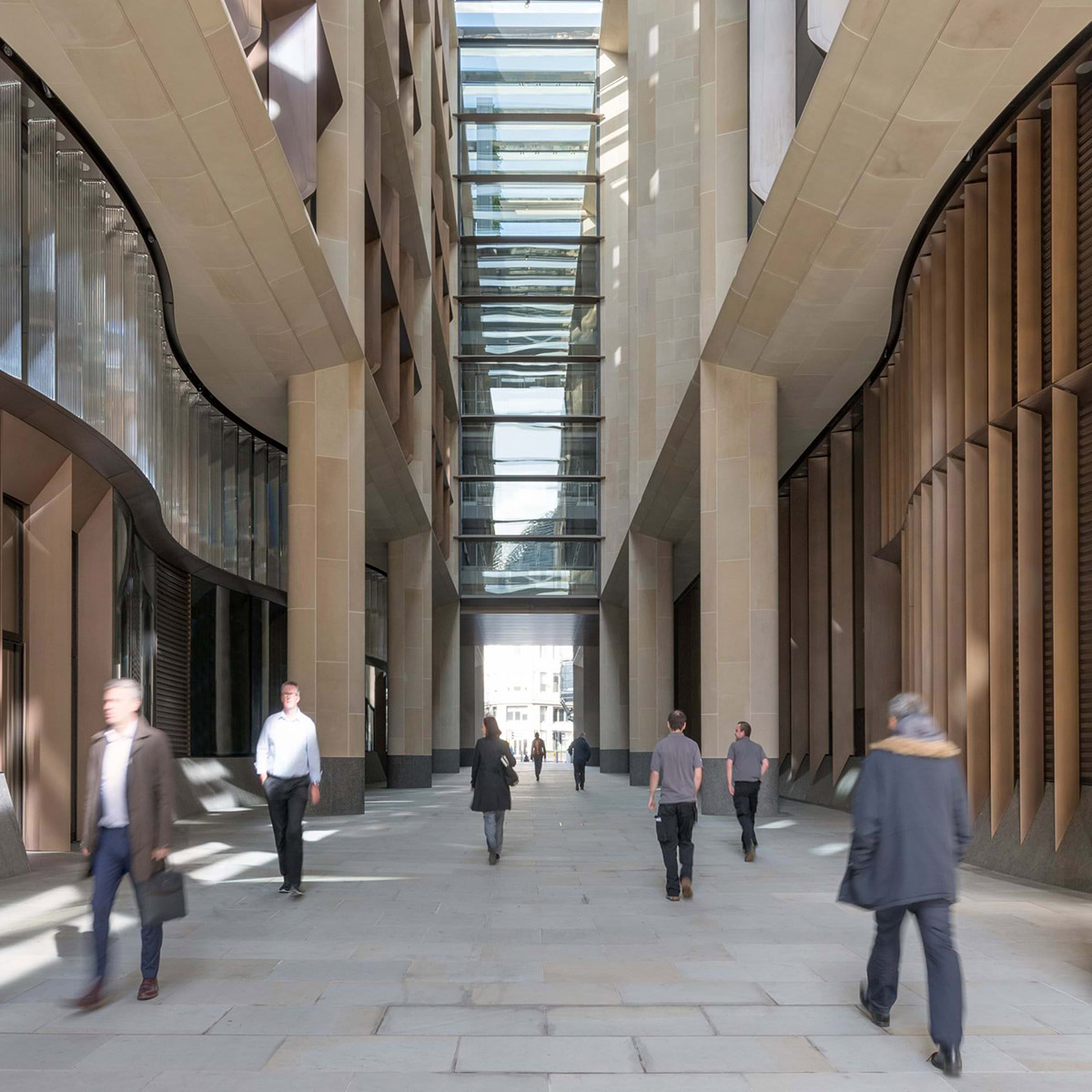 The new Bloomberg building also returns the archaeological remains of the Roman Temple of Mithras to the site of their original discovery, with a new interpretation centre and cultural hub designed to give visitors an immersive experience of the temple and bring the history of the site to life.

The main entrance to Bloomberg is defined by a substantial porte-cochère, where the building forms two sides of a new formal city square. Beneath this square is a new entrance to Bank Underground station, constructed as part of the project, that connects to the Waterloo and City line. 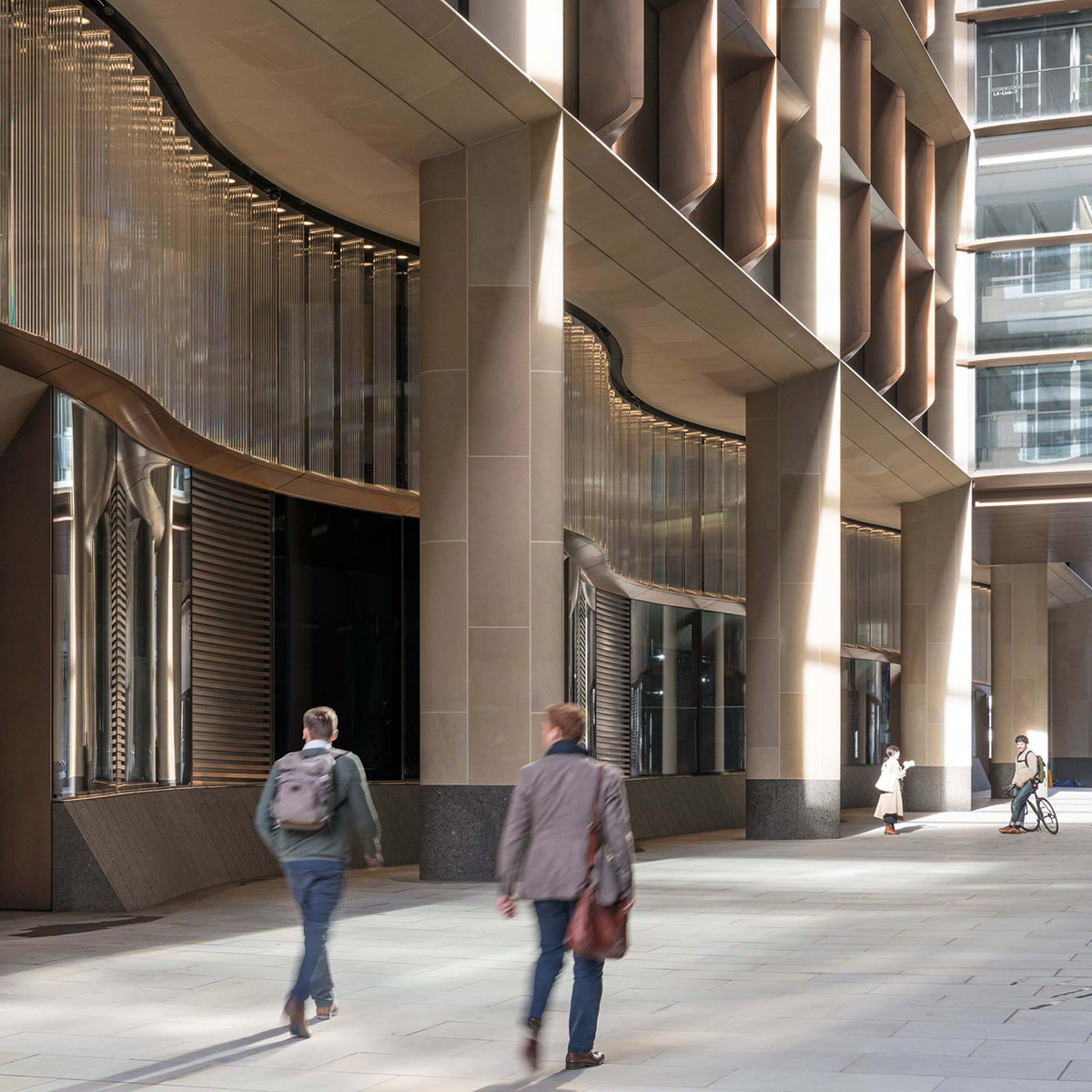 Arriving at the main entrance, everyone passes through the reception lobby before being drawn into the Vortex – a dramatic double-height space created by three inclined, curving timber shells, whose unique form echoes the dynamism and energy of Bloomberg.

These shells twist to form an oculus at their apex, which contains an artwork titled 'No Future Is Possible Without A Past' by Olafur Eliasson. From here, high-speed fully-glazed lifts with a unique concealed mechanism – another innovation developed specifically for the building – carry everyone directly to the sixth floor. 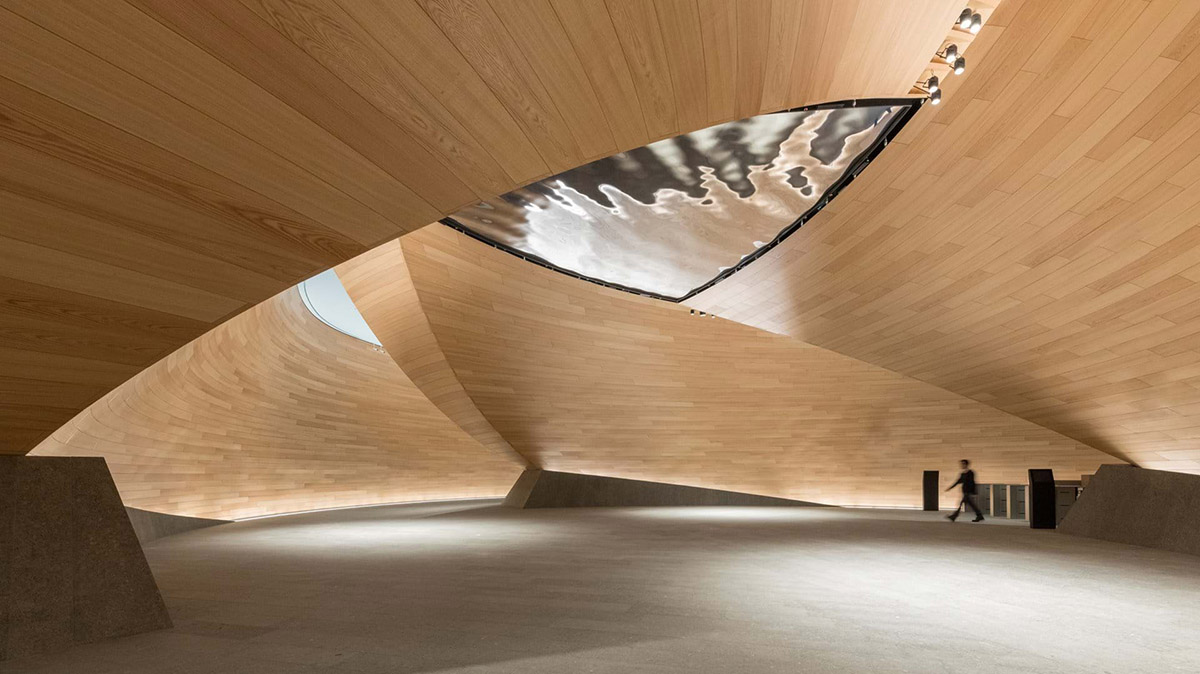 Central to Bloomberg’s ethos, the double-height 'pantry' on the sixth floor is the heart of the building, reflecting the importance of sharing and collaboration at the company. Everyone passes through this animated space, increasing the likelihood of chance meetings and informal discussions.

The upper level of the pantry is formed by a sweeping crescent of individual meeting booths that overlook the central space, known as the Ha-Ha, referring to the classic landscape device that inspired their design.

A distinctive hypotrochoid stepped ramp, characterised by its smooth continuous three-dimensional loop, flows through the full height of the building, adding to the drama of the space. Clad in bronze, the ramp is designed and proportioned as a place of meeting and connection, allowing people to hold brief impromptu conversations with colleagues, whilst not impeding the flow of people. 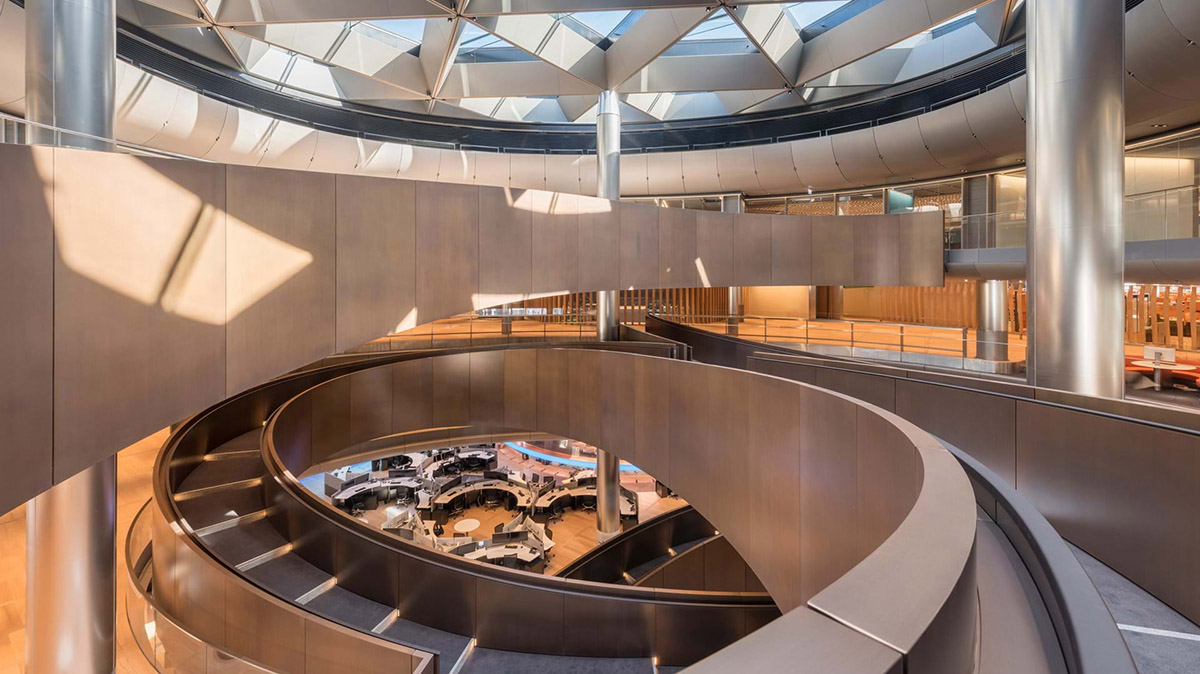 "The design of the building supports the values of Bloomberg as an organisation and the way it operates. The cores have been pushed to the edges of the building to visually open the floors and reveal a spiralling ramp, the heart of the building, bringing together the people who work in it. In a sense, it is all about community and collaboration – both within the building and the way it embraces its surroundings," said Michael Jones, Senior Partner at Foster + Partners and Project Architect of Bloomberg’s new European headquarters.

The notion of teamwork and collaboration flows into the desking systems and layout of each floor. Bespoke height-adjustable, radial desks are laid out in clusters and pods for up to six people, allowing for privacy, personalisation, wellbeing and collaborative working.

The ceiling is another unique and innovative element developed for the building, inspired by the pressed metal ceilings of New York. Its distinctive polished aluminium panels of 'petals' perform multiple roles – ceiling finish, light reflectors, cooling elements and acoustic attenuation – combining various elements of a typical office ceiling into an energy-saving integrated system.