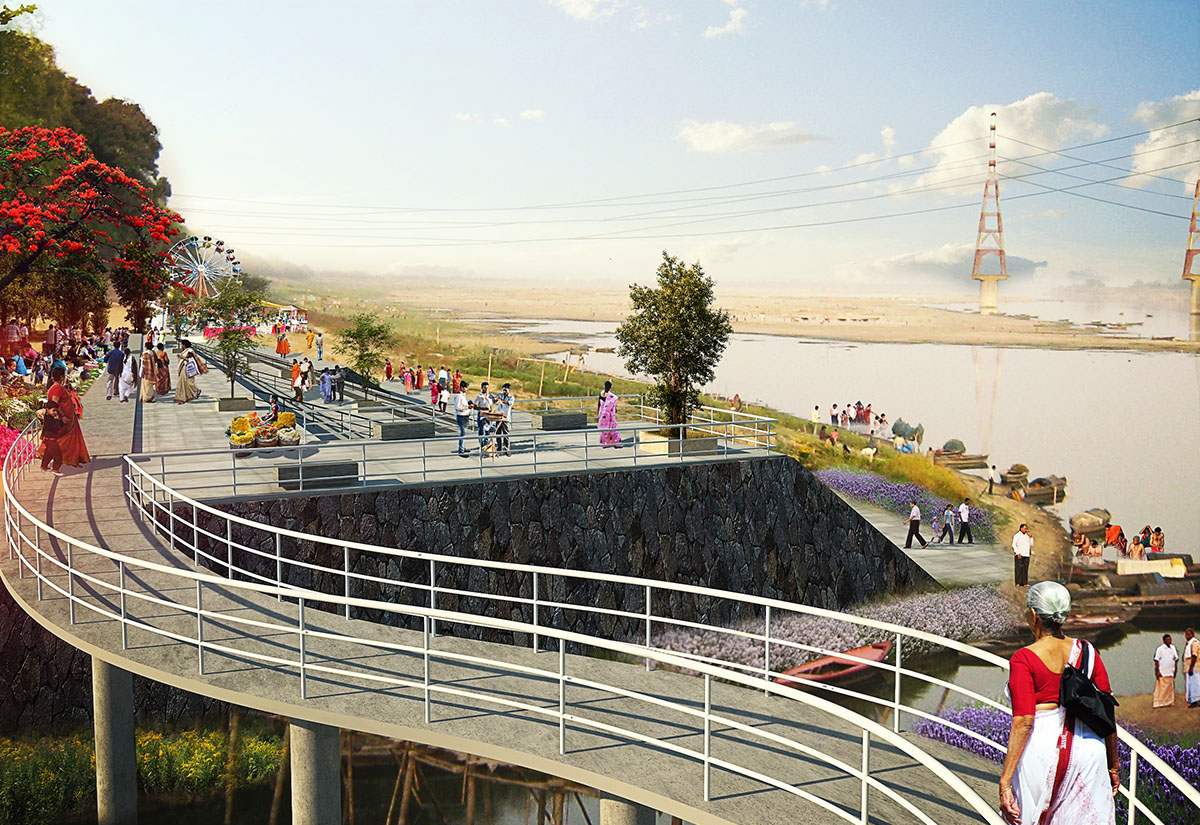 Indian architecture firm Morphogenesis presents an urban intervention for sustainable restoration of a historic interface between the space of human habitation and the space of water. What makes the Ganges an important river to do this for, is its historic relevance - it is almost one with human life, and directly and indirectly supports almost 10% of the world’s population. 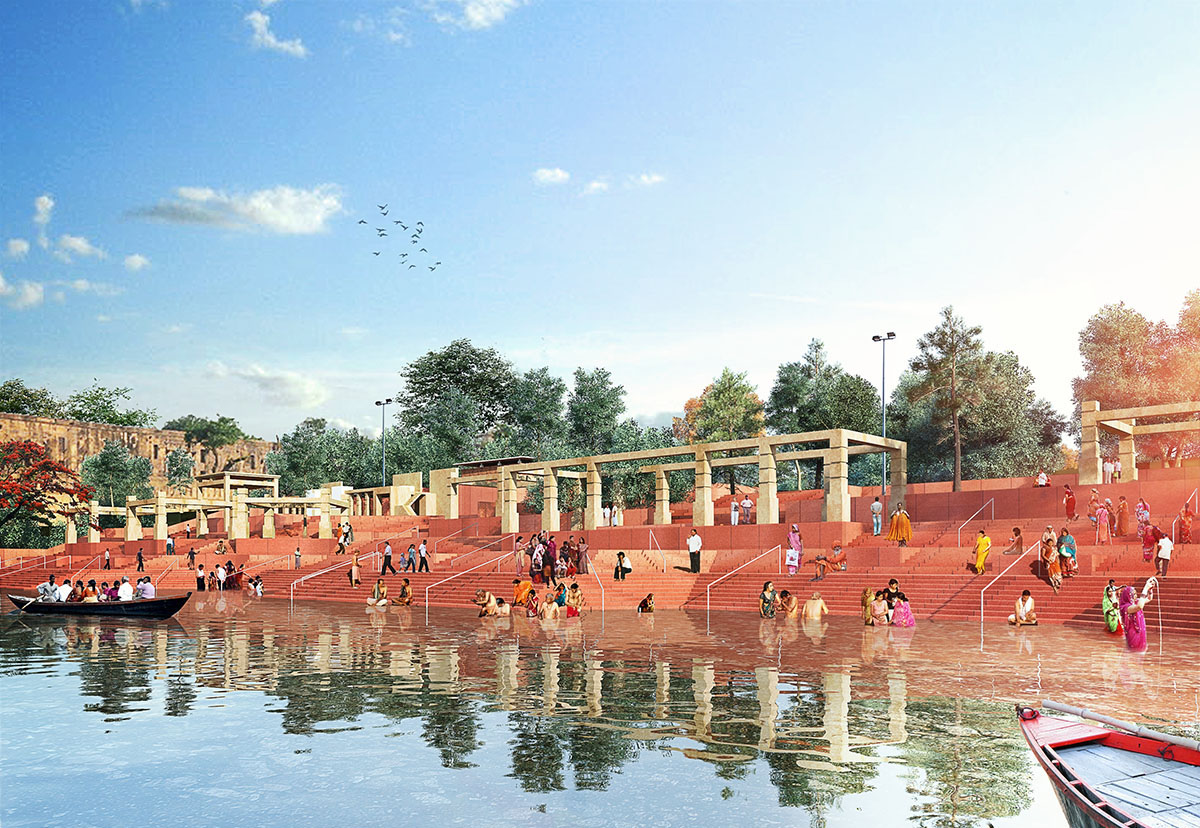 That puts into perspective the enormity of the task at hand. Yet, the Ganga is dying. The issues that the river face today are environmental, social, hydrological and infrastructural. Whilst all are important, the most critical one to tackle is the Ganges’ environmental degradation. The Ganges probably carries more sewage than any other water body in the world today. 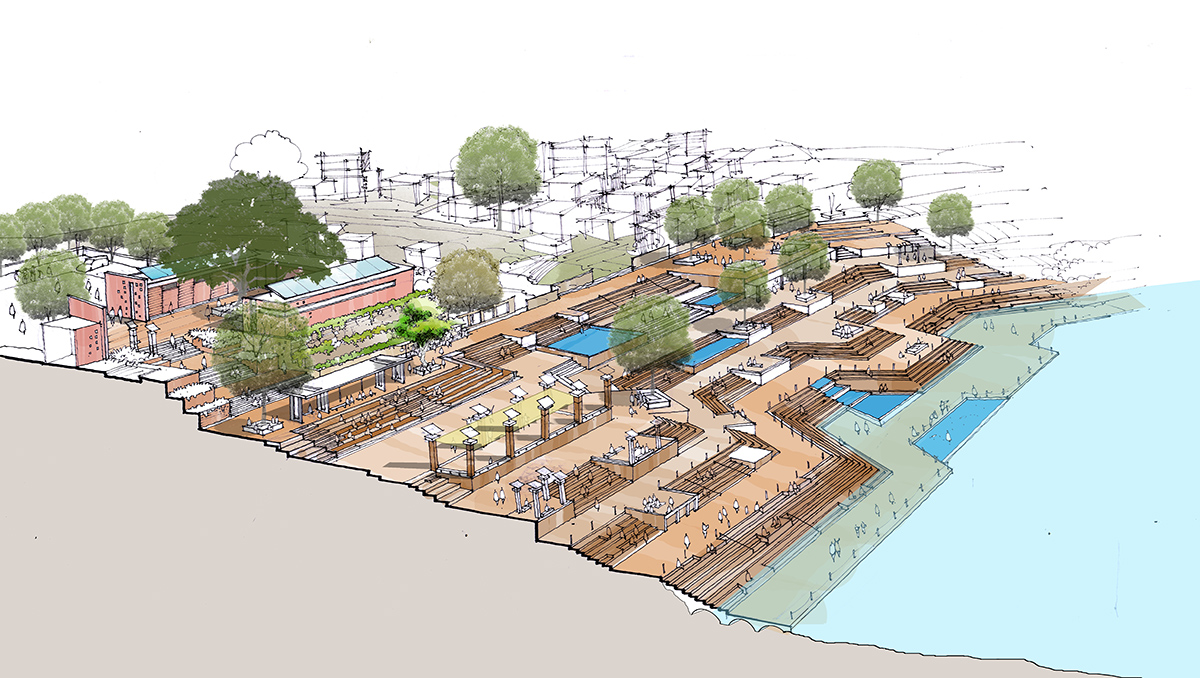 260 million litres of industrial waste pours into it every day, more than the output of several nations. It carries pesticides and is highly contaminated by ritual waste and human remains. While the Ganges provides life to a significant population, the number of waterborne deaths it causes due to pollution, at a conservative estimate, is 600,000 per year.

As architects and advocates for this 'River in Need', to design in an environmentally contextual and culturally sustainable way, one has to recognize that the ultimate goal to close the circle of life around the Ganges is to become one with the river.

Morphogenesis aims to design the crematoria and actual pyre, to reduce the amount of wood required to 30%, thereby also reducing the cost of the cremation, which is often higher than the annual income of the household. 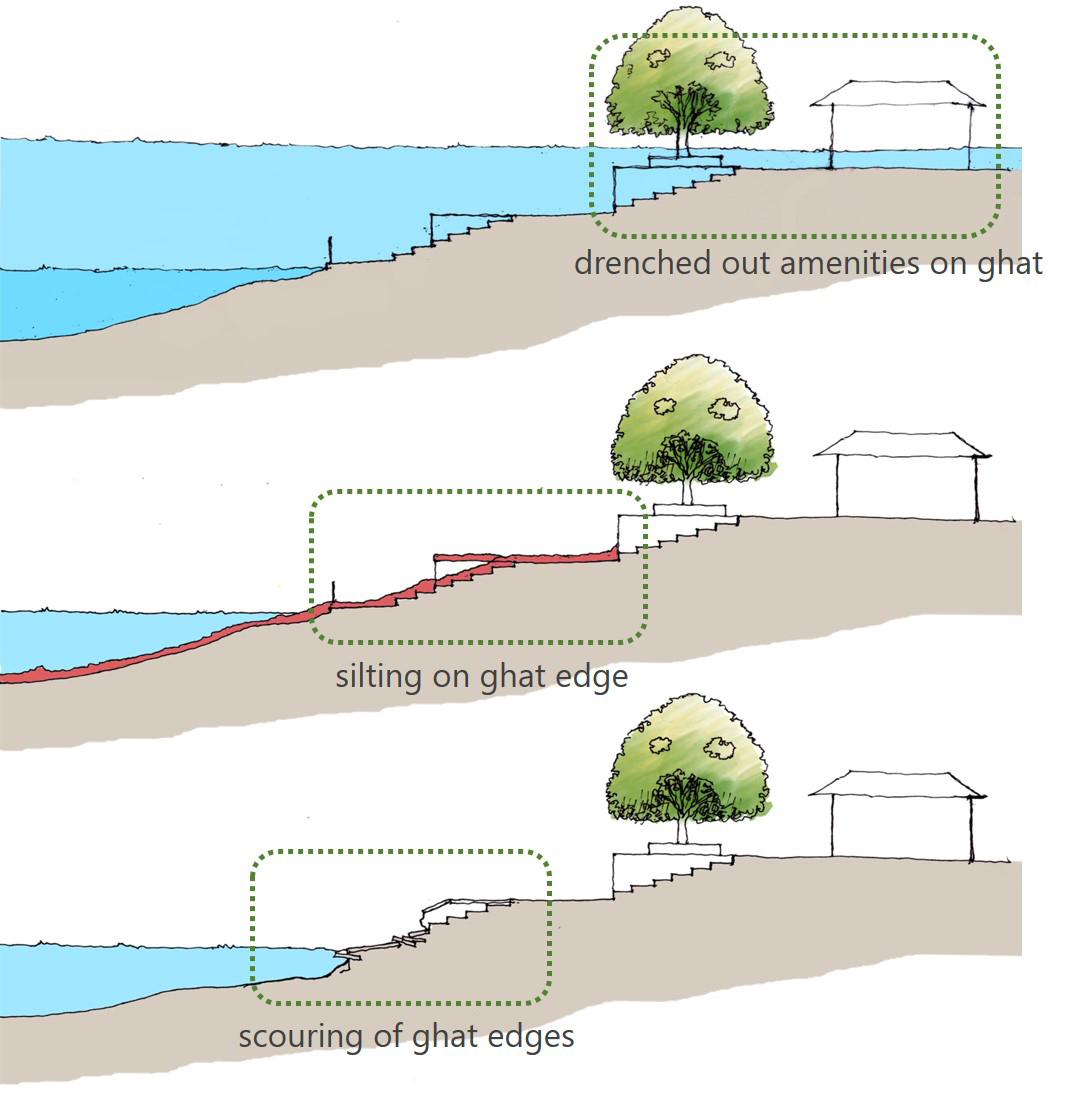 There has to be a sensitive handling of all the various rituals that the Ganges is part of. A large-scale vision and small-scale execution is key to a successful implementation.

Whilst looking at rejuvenating the usage of the river, a prime design concern has been dealing with the erosion of the river bank, which is addressed by researching and redesigning traditional vernacular learning of the way the water edge was treated, such as ghats (a flight of steps leading down to the river), which lent themselves to stabilizing the river edge along with providing the interface for human and water engagement. 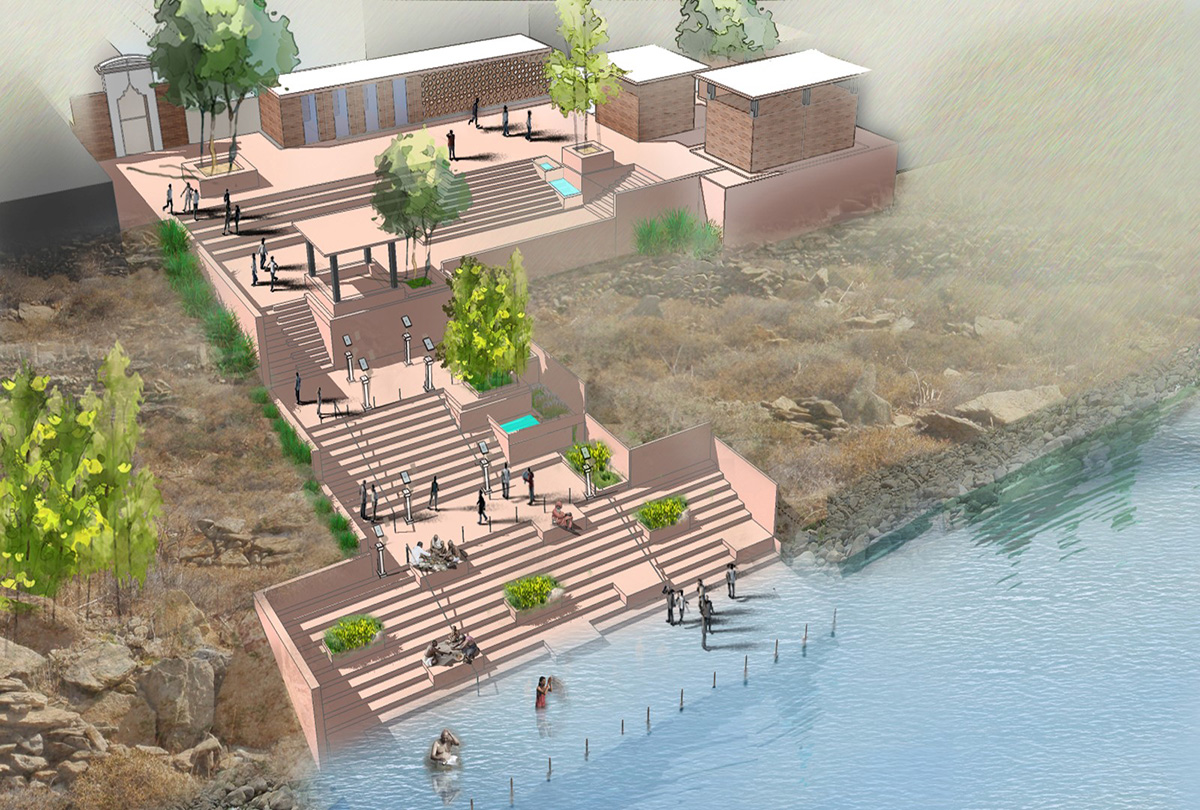 The provision of ritual tanks and various other urban design elements – platforms for discourse, platforms for cremation – are such that all the acts can be performed using the water in a controlled way, hence introducing the potential for cleaning of the polluting elements. Morphogenesis has looked at reforestation with plants that are resilient, and work with varying flood levels on the ghats. 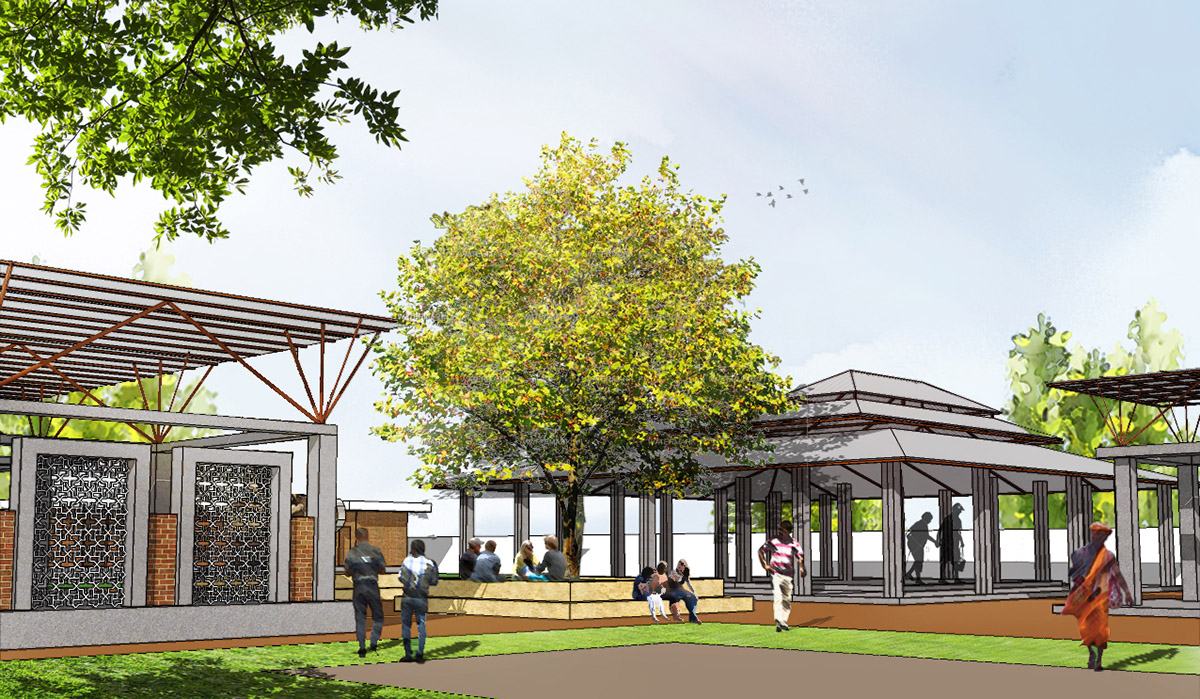 With increasing densification of Indian towns and cities, there is greater need for space required for urban interaction, community building and for public engagement. Morphogenesis aims to turn the city inside out by sustainable development of this riverside urban frontage.

These ghats when redeveloped will not only serve their traditional ritualistic purposes but also function as urban spaces for discourse and dissemination of knowledge. In that vein these spaces are designed to be Wi-Fi enabled, and in keeping with sustainability metrics, they will almost entirely run off solar power. Simple technological yet historic innovations like hume pipes are introduced to stabilize the edges. 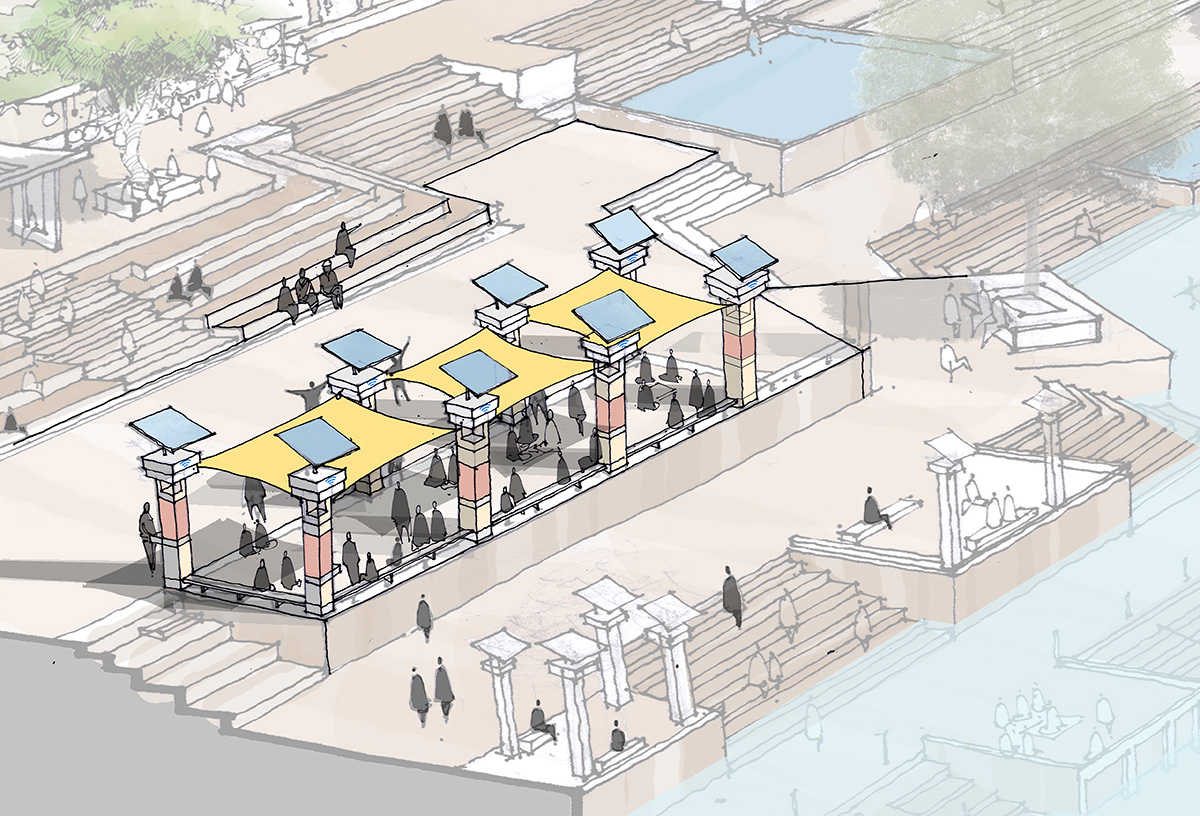 In terms of design strategies, locally available porous materials, which allow water to percolate through, are used. Almost all structures are proposed to be made of brick because of the good quality soil available in the region, and that it is low maintenance and self-cleaning with the weather. Chaupals (seating under the shade of trees), which have been the age old gurukul method of teaching, are reintroduced as shade canopies for social activity. 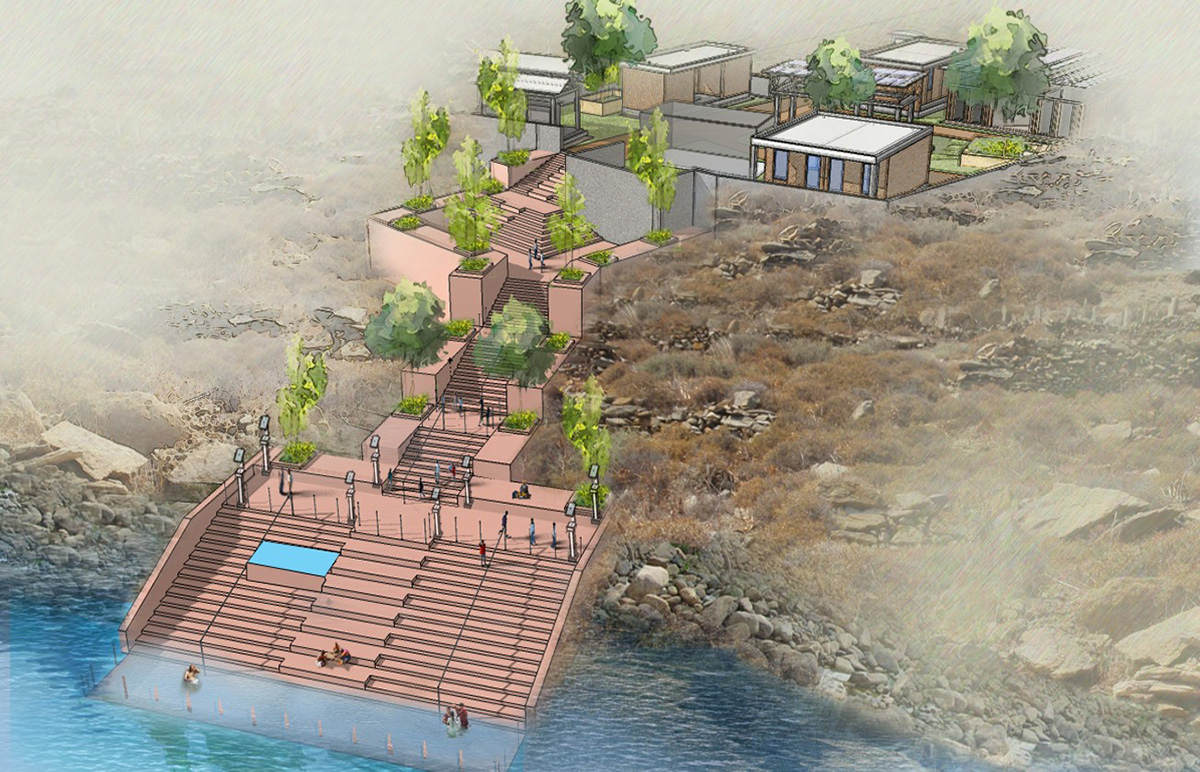 Piers capable of sustaining water transport up and down the river have been designed. Morphogenesis’ social agenda is to respond to a river in need, a river that feeds one of the highest densities of population in the world, and in its resurrection, not only bring back the glory of the past but also create potential for the future that sustains the Ganges’ intrinsic importance in the lives of future generations.

Morphogenesis, founded by Manit Rastogi and Sonali Rastogi in 1996, is currently working with more than 100 architects in Delhi, Bangalore and Dubai offices. The studio recently published its first monograph titled "Morphogenesis: The Indian Perspective | The Global Context", celebrating 20 years of presence of the firm at the forefront of Indian Architecture.