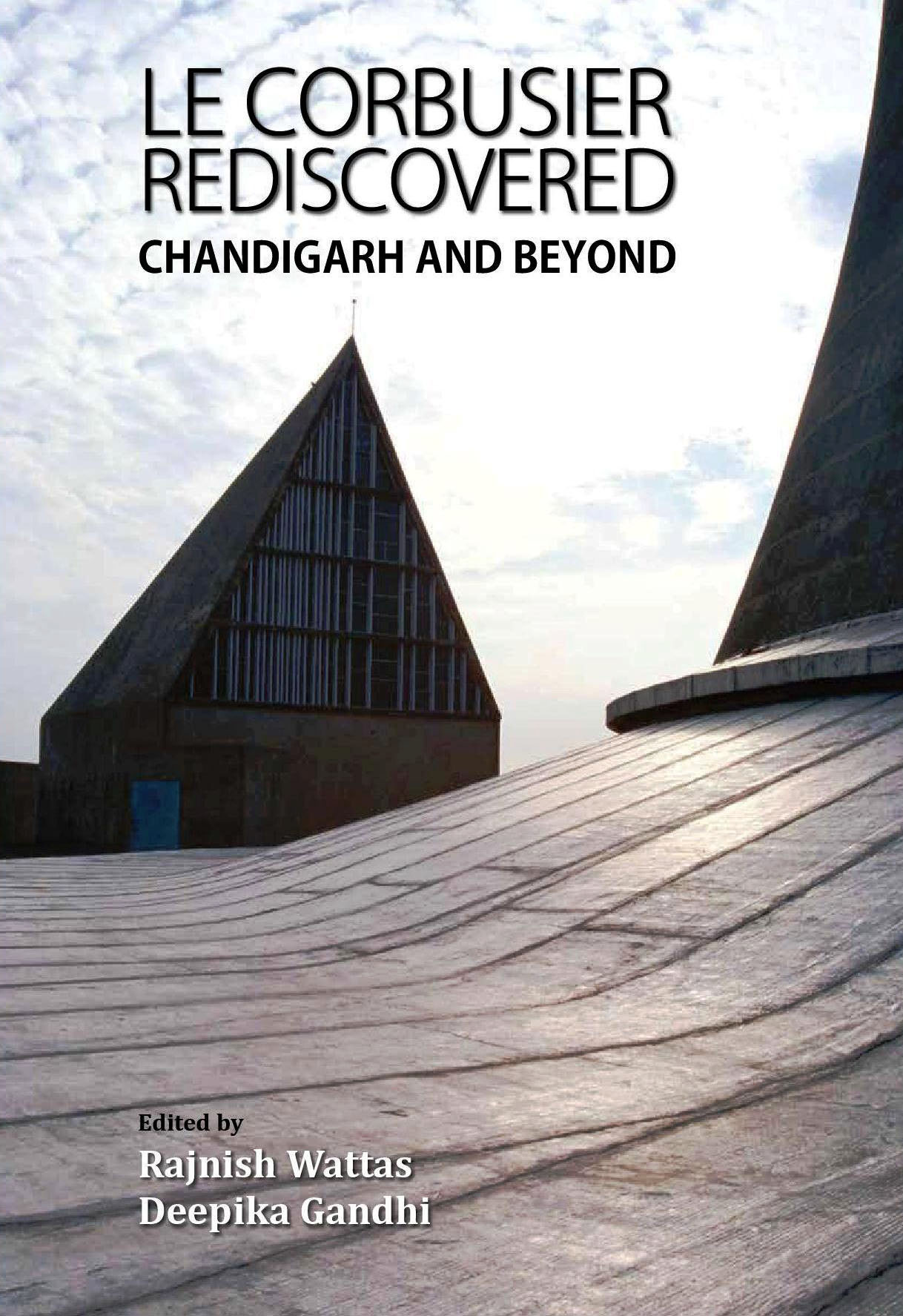 This new book titled "Le Corbusier Rediscovered: Chandigarh and Beyond" edited by Prof. Rajnish Wattas and Ar. Deepika Gandhi celebrates, explores and revisits many of Corbusier’s ideas – and most importantly this is not done in isolation but in the context of time, space and with the perspective of the users of his buildings as well as the citizens of the city. With the dimension of time, the green-fields of the Chandigarh site that Corbusier worked upon is totally a different place now. It is above all else a living heritage. Both Chandigarh and other Indian cities are undergoing a humongous, vibrant growth. A buoyant economy, aspirational new generation and the government’s focus on revitalising urban areas pose myriad challenges for the Indian architects and planners.

Chandigarh’s Capitol Complex is still an incomplete composition with the Governor’s Palace un-built, as are some other smaller connecting elements and landscape features. It was felt that the decision on undertaking such a task belatedly has to be well considered bearing in mind the challenge of maintaining the authenticity of the original design. The mixed response to the completion of Corbusier’s Saint-Pierre church at Firminy, France, completed in 2006, forty-one years after his death is also a case in the point. 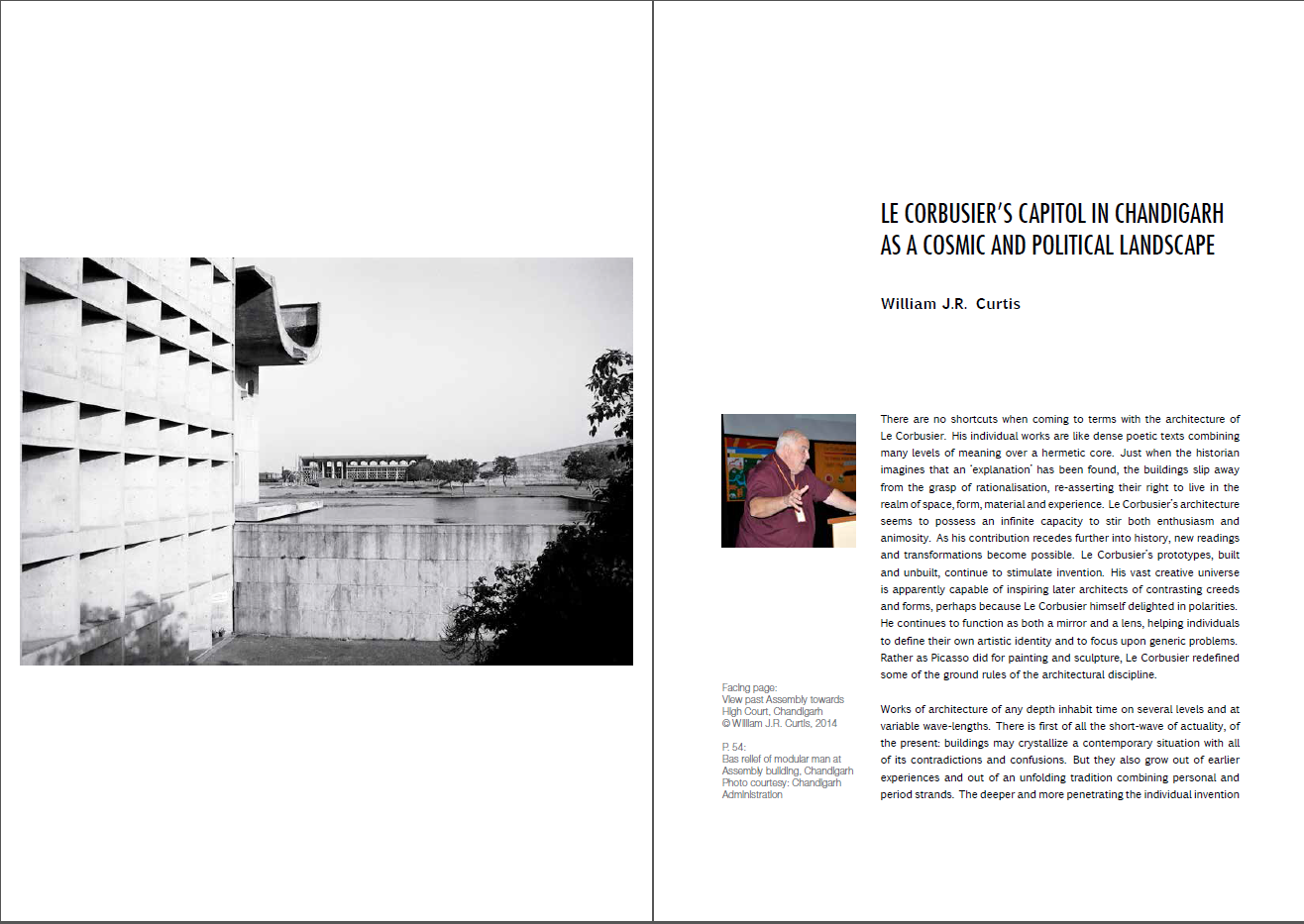 Numerous other issues are discussed in this book, such as how relevant it is to try and conserve all Corbusean structures in Chandigarh, and how to decide the relative value of their architectural heritage? How to find the right balance between the officially declared heritage component of the city and the rest of it where burgeoning populations are stressing services and infrastructure resulting in the clamour for more need-based changes? The growth of cities in the developing world demands different strategies than those adopted in developed countries.  Chandigarh still inspires a renewed utopian search for the 21st century’s ideal city, not only for India but for the entire developing world. 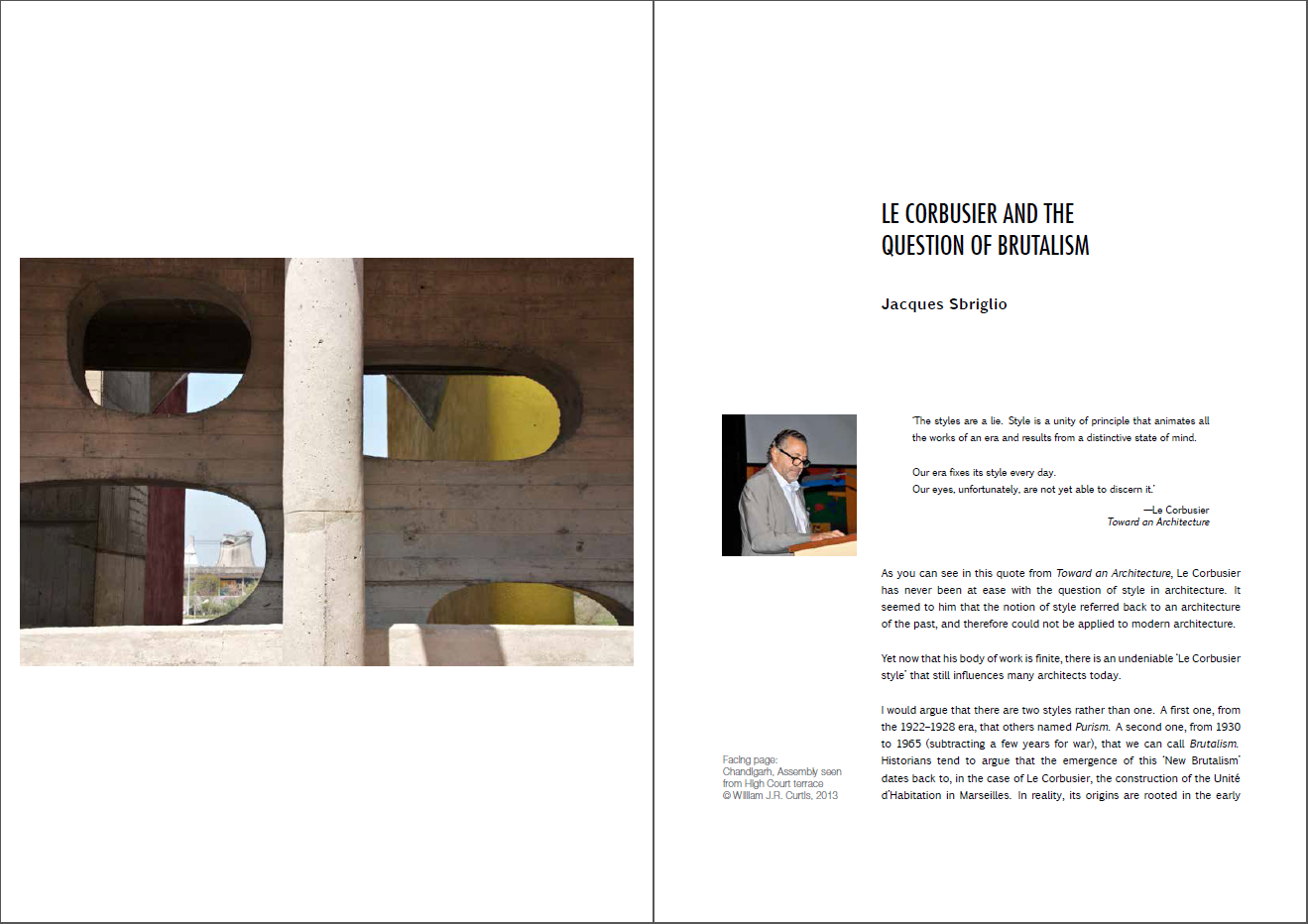 Therefore the book with it’s diverse, yet, thematically linked sections and the seamlessly blended together essays covered by diverse authors, and hopes to become a significant entity in its own righteous attempt. These various sections build up the overall theme of the book in a sequential and interconnected narrative. The seemingly independent and ‘disparate’ essays are complete in them and are all actually linking to a collective whole and the separate dots get connected finally making the book as one single entity. 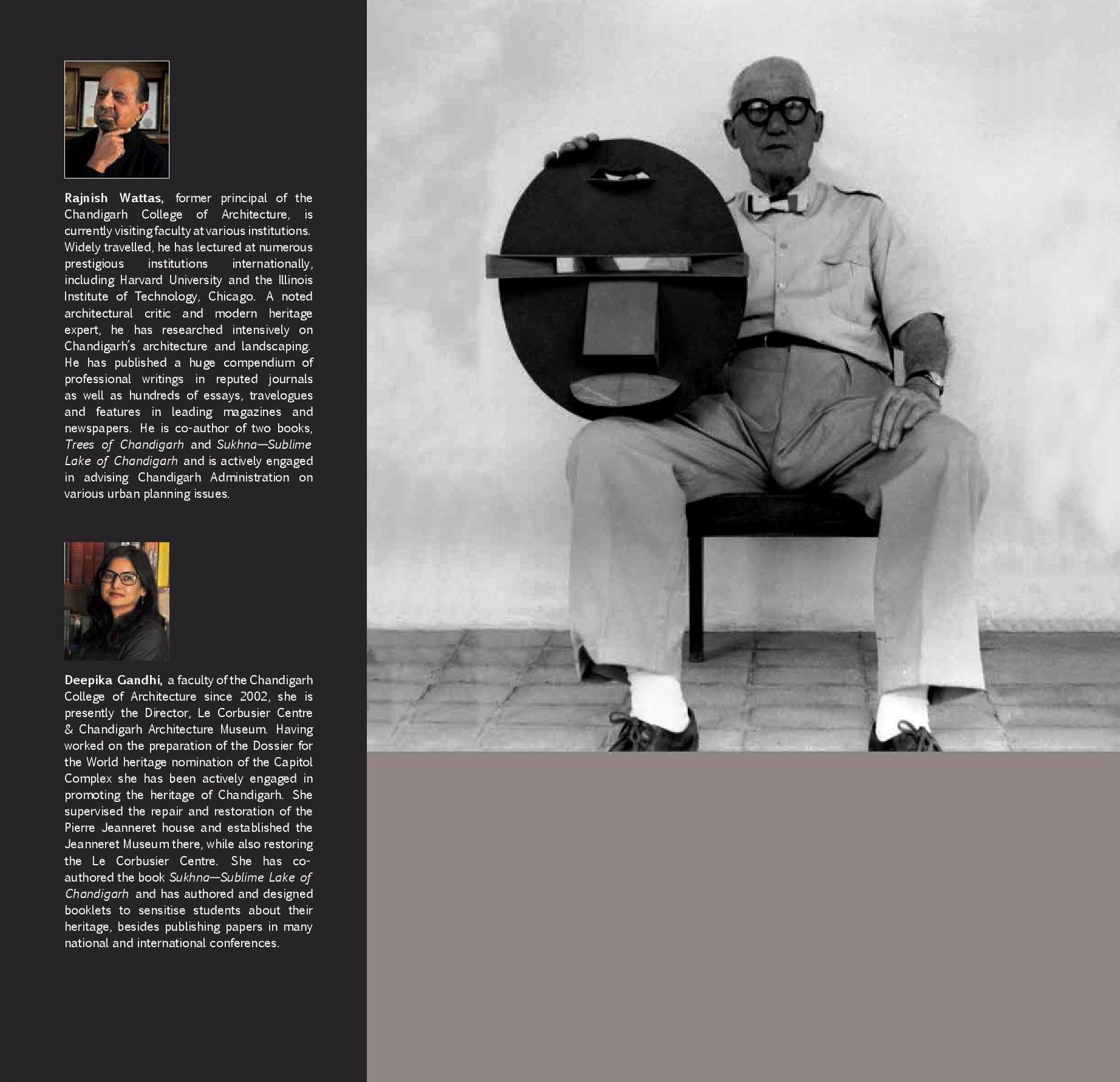 Section One of the book is based on the theme ‘Le Corbusier: The timeless in Modern’ comprises of the essay ‘Le Corbusier’s Capitol in Chandigarh as a Cosmic and Political landscape’ by William J R Curtis. It decodes the myriad enigmas of Corbusier’s architecture; “His individual works are like dense poetic texts combining at many levels of meaning over a hermetic core.  Just when the historian imagines that an ‘explanation’ has been found, the buildings slips away from the grasp of rationalization, re-asserting their right to live in the realm of space, form, material, and experience.” 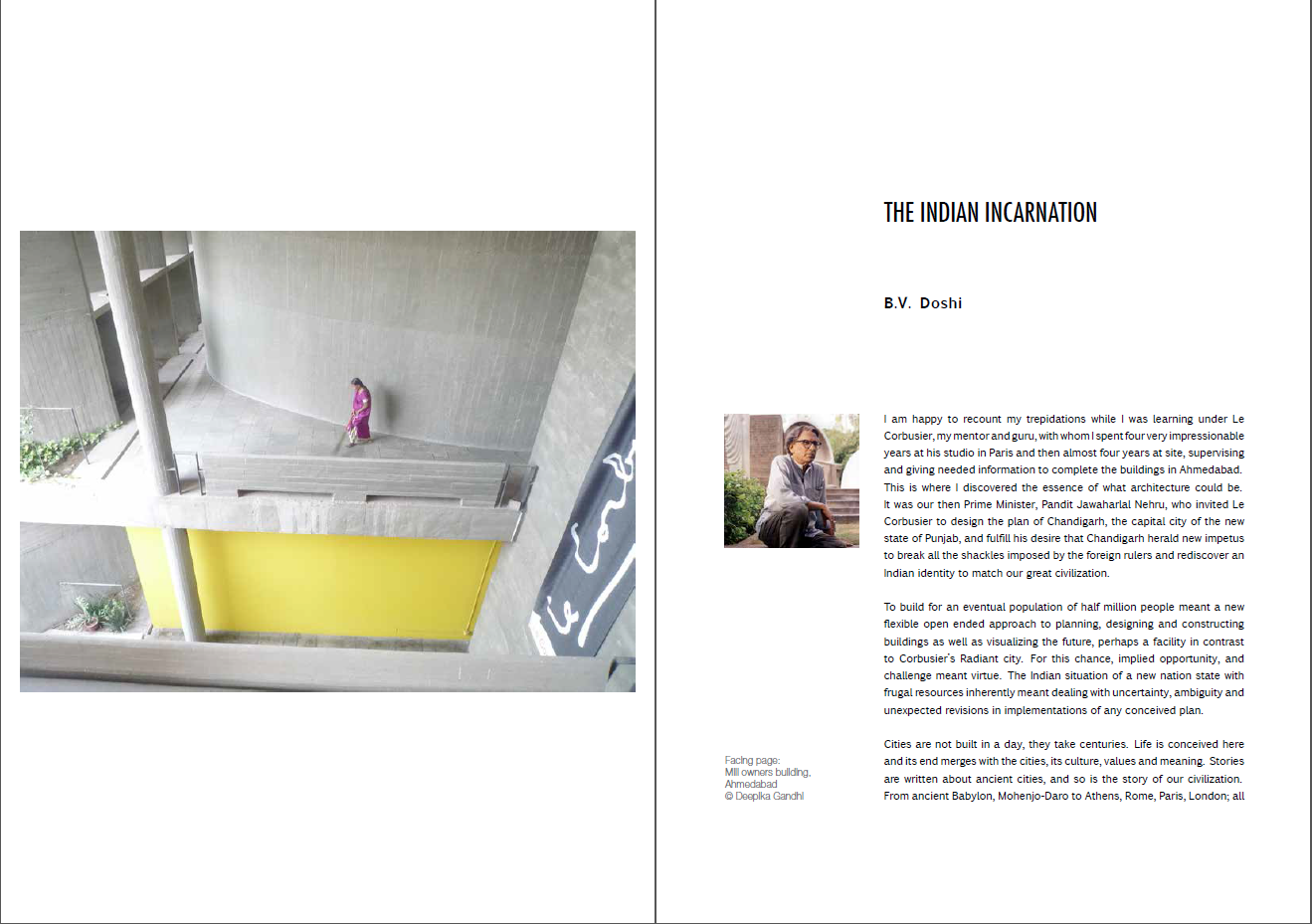 Complimenting this exploration of Corbusier’s genius B V Doshi—the only Indian architect who worked with the master on Chandigarh’s Capitol Complex project in his Paris office and later on his works in Ahmedabad close hand, provides rare first-hand insights into the way Corbusier ‘played the game’ of inventing, reinventing his ‘toolkit’ of architecture. In the essay ‘The Indian Incarnation’ he shares, "Why and how he designed the buildings the way he did …. What he was before in Paris and what he was still in Paris, he was not the same in India, particularly in case of architecture in Chandigarh and Ahmedabad". He adds that “architecture was a serious game for him but it’s a game of learning, acquiring, enjoying and experiencing”.

> via Le Corbusier Rediscovered: Chandigarh and Beyond