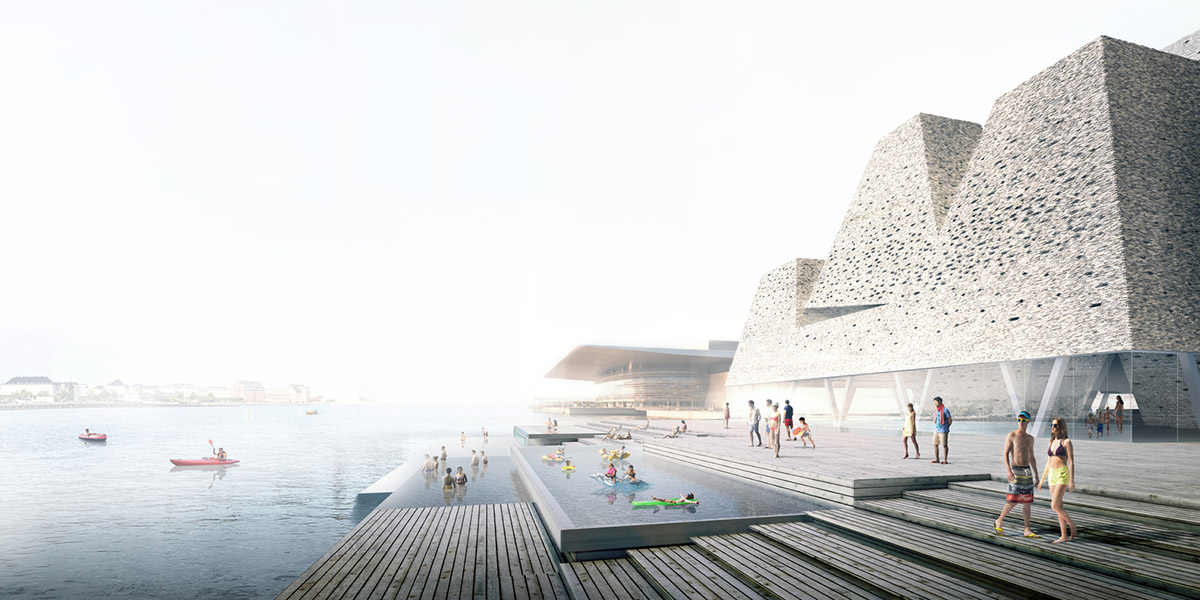 Taking cues from the significance of water, culture and vibrant urban life of Copenhagen in the history, the studio created a series of pyramid-formed buildings as a landscape element to be a piece of art rather than a standalone object. Strongly defined and unified by the water, Kengo Kuma's design aims to offer the diverse experiences of water in various states and conditions such as reflection of light and shadow, steam and flow that appeal to human senses. 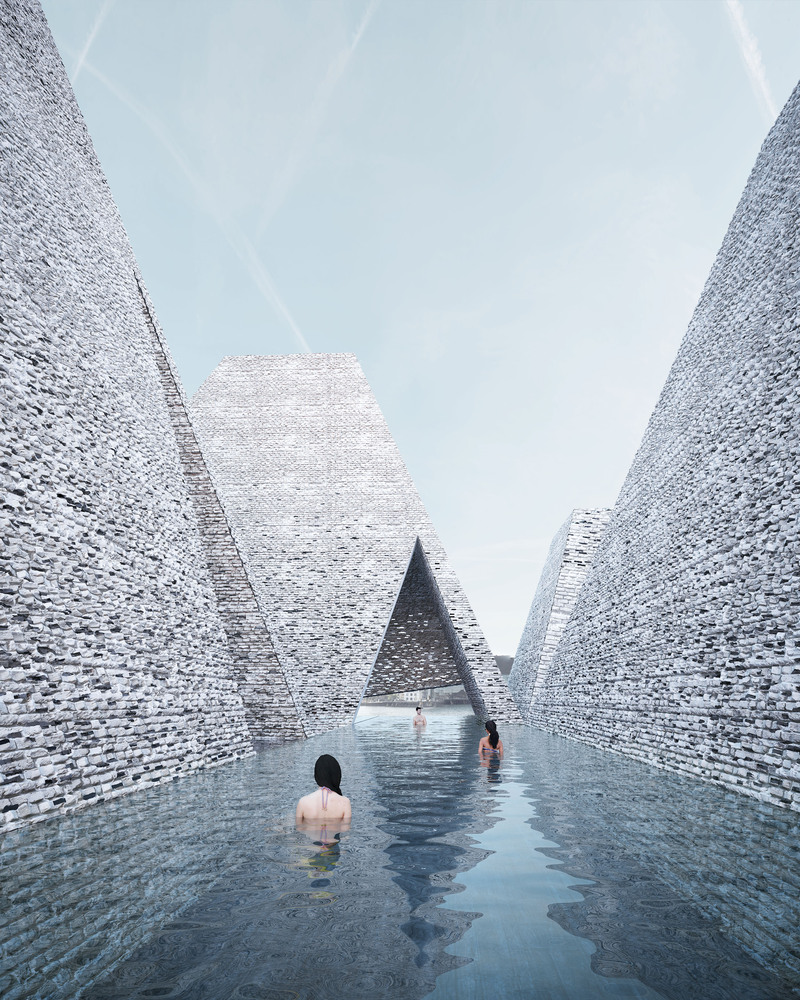 "The harbor is the gate contributed greatly to the city’s development. Waterfront has become the foreground and the background for major cultural facilities and the quality open public area that defines the urban life in the city," said Kengo Kuma & Associates in its project brief.

Setting a transitional relationship between cityscape and waterscape, the design takes its architectural form as a series of pyramid shape in which directly gives a response to the masterplan guideline to work with roof profile of Christiansholm but at the same time it expresses its unique identity. 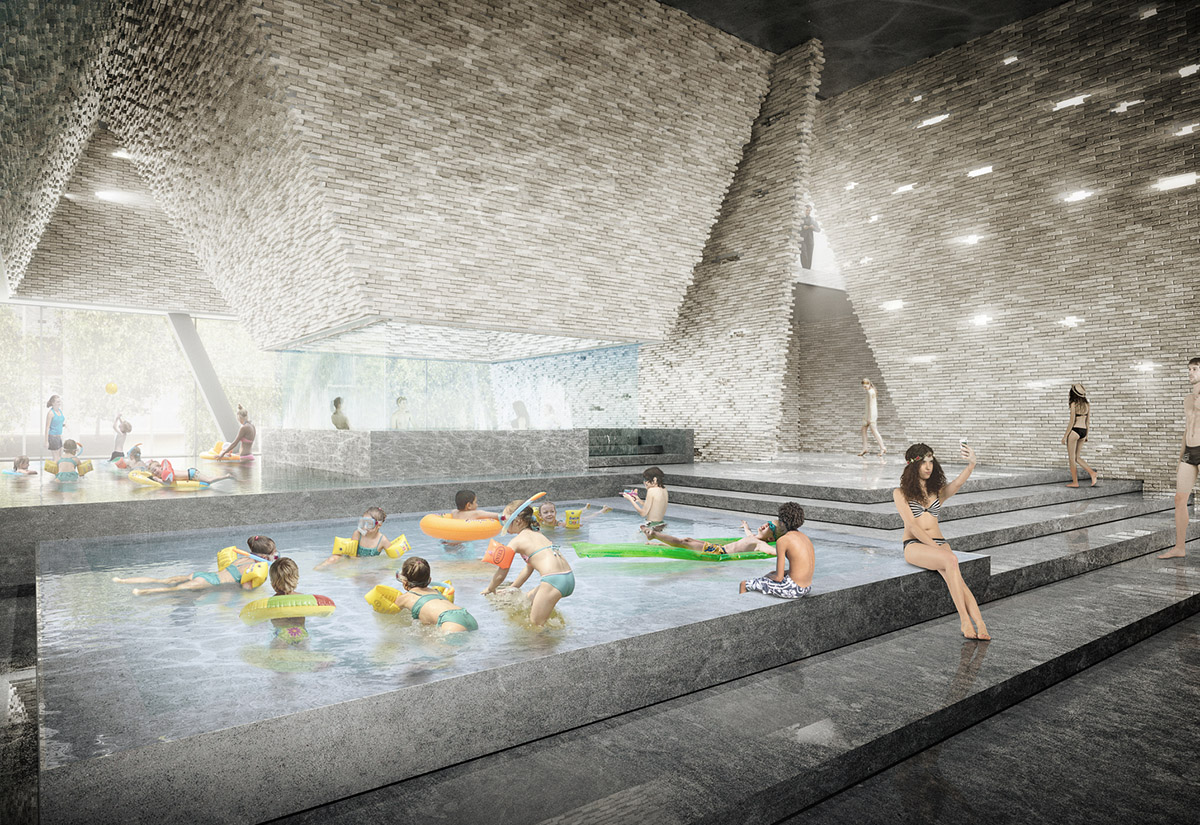 The complex doesn't offer a single front so the buildings can easily be perceived and accessible from various directions. The Waterfront Culture Center will offer spontaneous, open and tangible place that carries the memory of vibrant and dynamic nature of the present Paper Island. 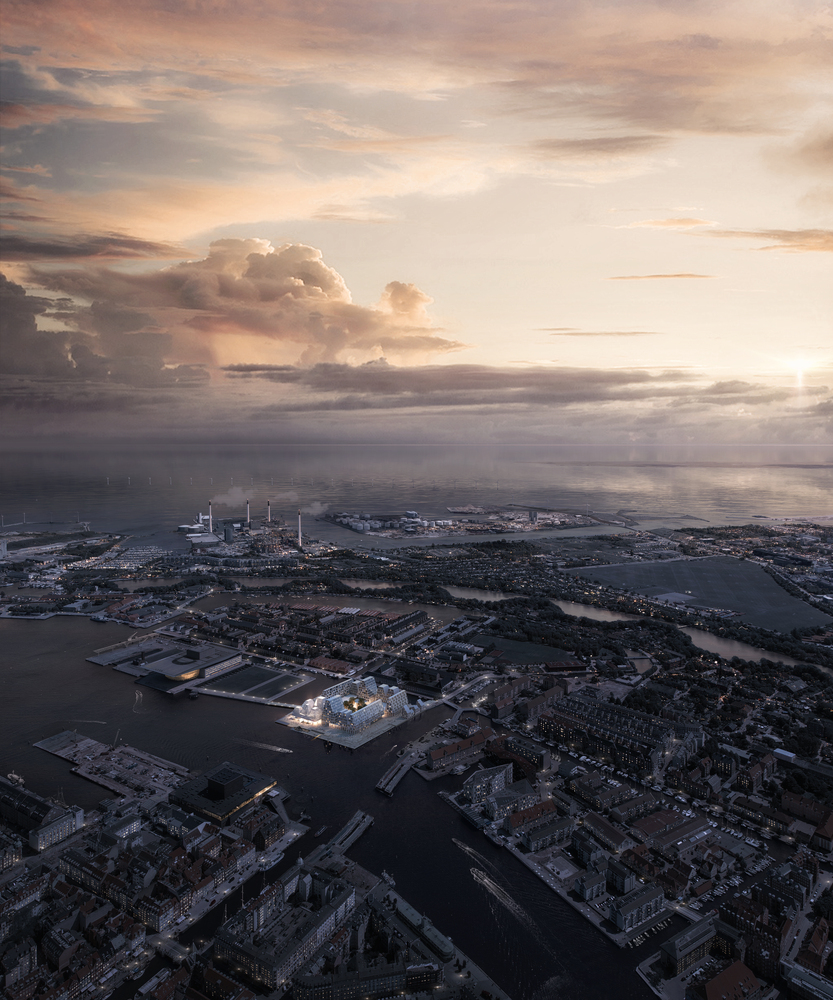 "Taking advantage of the prominent corner site of the project defined in the masterplan, the ground floor plane of the indoor to outdoor and to the sea is designed in a single gesture," added the firm.

"Landscaping the ground plane in terracing and cascading manner creates expansive, continuous perception of water surface from indoor all the way to the harbor. Our design attempts to soften and dissolve the edge and blur the sense of boundary of the land."

"Our strategy of generating the architectural space structure and the form is to manipulate the composition of positive and negative volumes," added the architects. 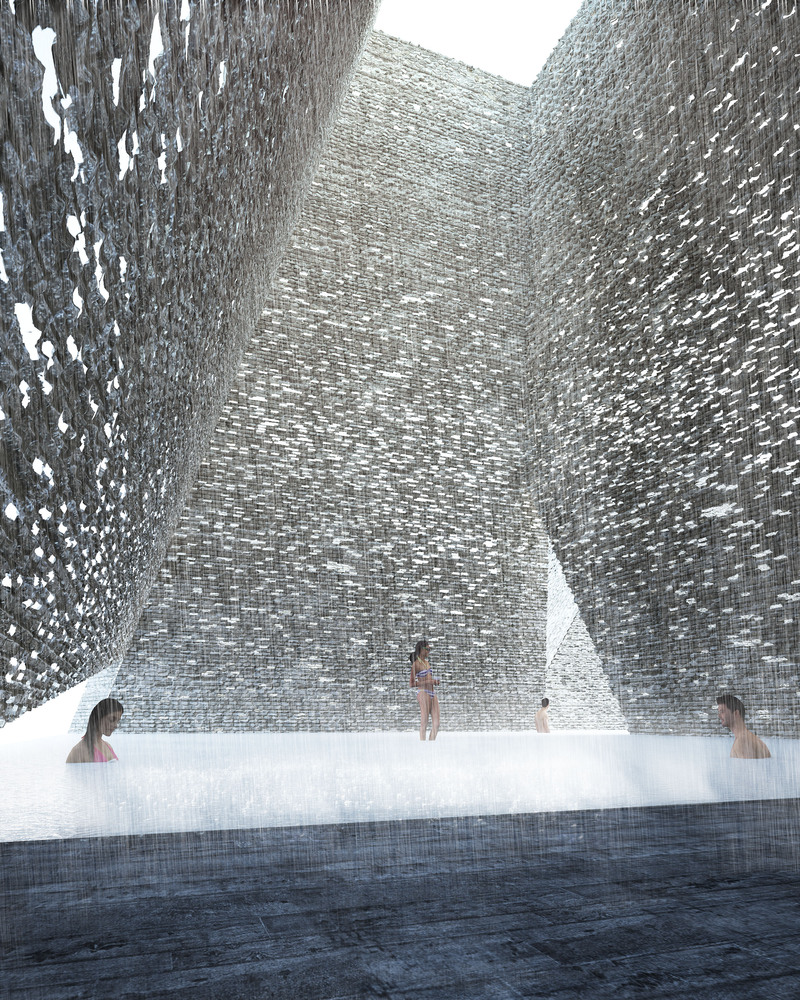 The studio creates a series of cone-shaped volumes in various proportions and they are generated by being pushed and pulled vertically and horizontally to create particular experiences for each program.

The cone shape roofs extruded above correspond to the division of pools at the ground floor. Each pool has a distinctive space in the almost exaggerated scale with concentrated light and shadow through large skylights above. 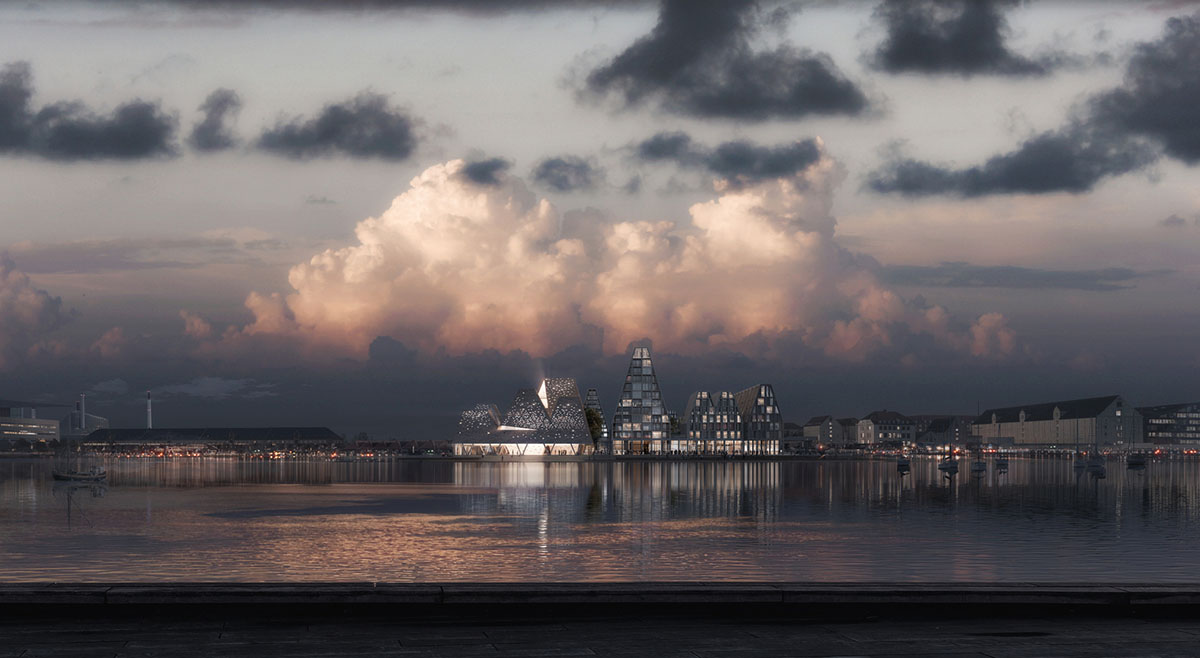 "The level above the ground floor is defined as the “negatives” of these extruded roof volumes. It is an open air pool and hot bath that one would experience swimming and dipped in the “valley” among the architectural hills," explained the architects.

"The inverted cone in the central position works as structural core. It is the deepest void, “valley” among these roofs where outdoor stairwell is placed."

The studio chooses grey-coloured brick to relate to the context of the area and to highlight the quality and aesthetic of the traditional Danish craft. Yuki Ikeguchi, Partner in charge, said that "Its haptic texture and warm natural earthy color tones of masonry would achieve the tangible skin defining interior and exterior. In our proposal we are exploring the potential of brick in its small scale texture being expressed in the large scale of the architecture." 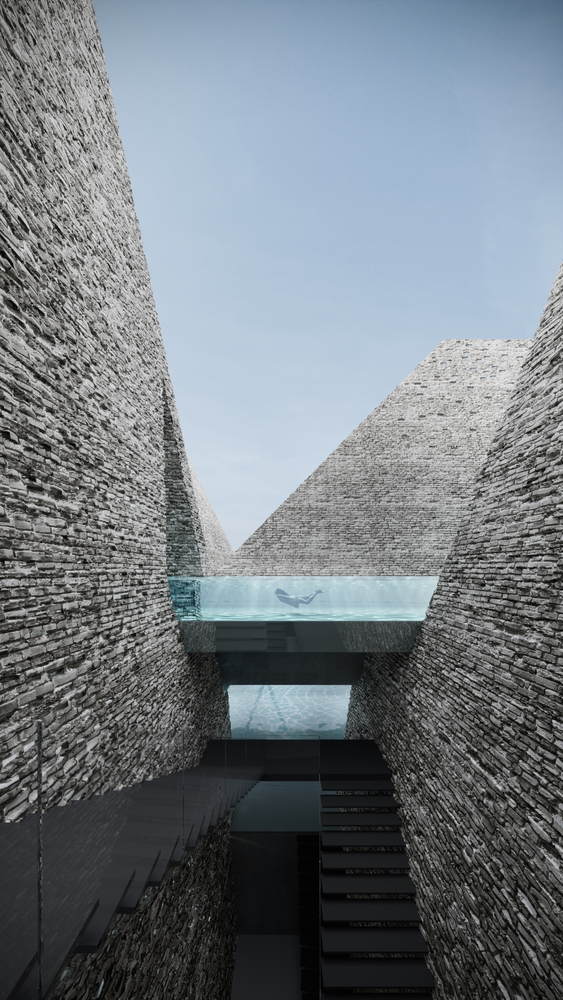 The buildings' small units allow architects to play with various openings and tectonics, screening natural lights and shadow that reflects on the water surface. The brick façade in various level opacity and transparency will glow with warm light at night and in cold season when dark hours last long.

"The perforated and screened brick skin would let soft light out in distinct manner. The dust of lights and their reflection on the water would glow at night and signals the presence of the new masterplan development and expresses itself as new unique icon," added Yuki Ikeguchi, Partner in charge. 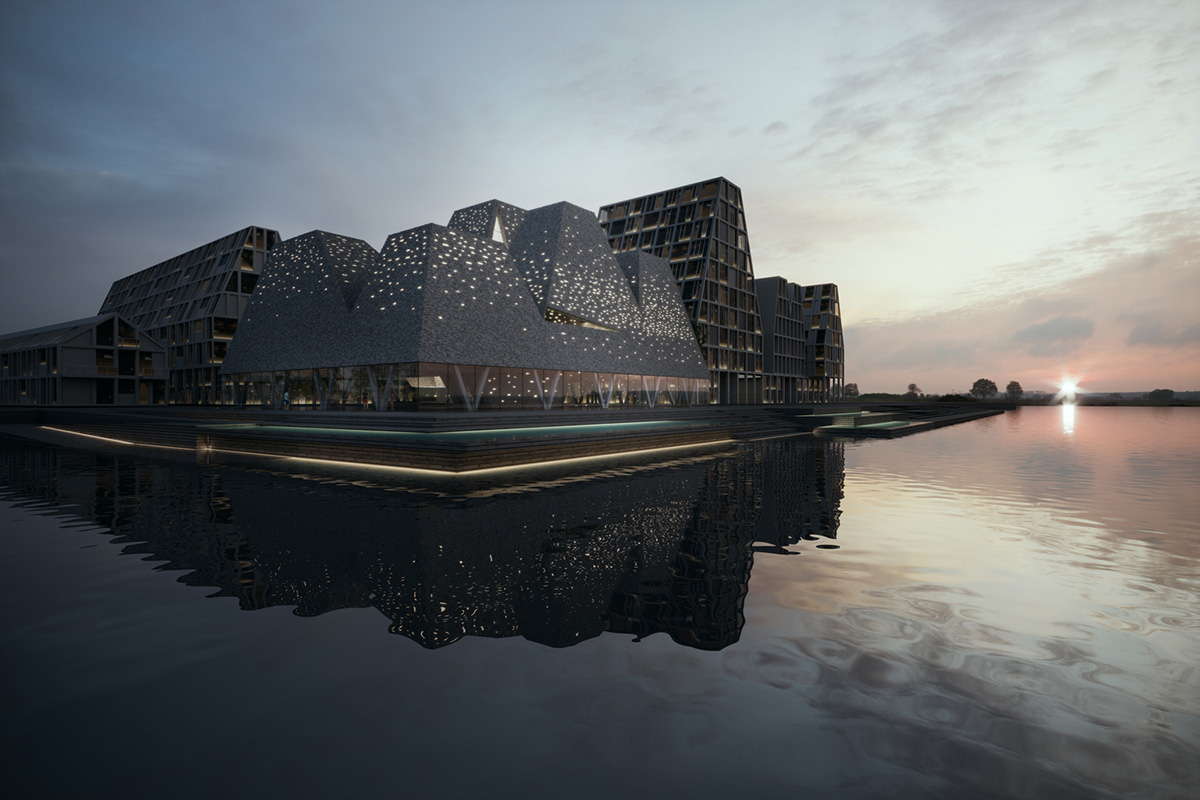 The Waterfront Culture Center reflects Kengo Kuma's architectural philosophy in a deep sense. Kuma recently talked to PLANE-SITE and explained how he integrates traditional architecture and its material qualities into his architecture with up-to-the-minute technologies. The firm recently completed a tree-like structure titled "Coeda House" without using extra columns in Shizuoka. 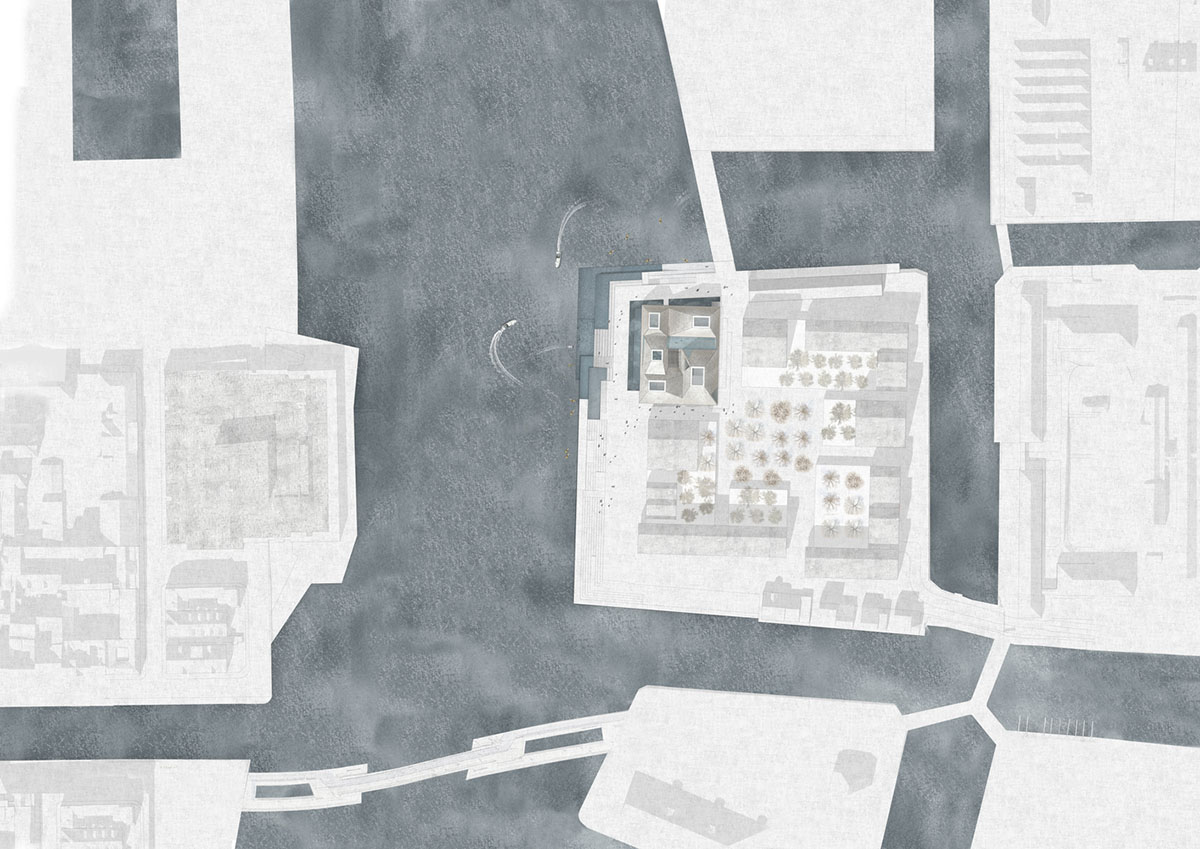