“The concept of immortality is askew. To live beyond time is more than a dream. As the design phase for the Black Taj began, the focus was on creating more than a static monument to the Mughal legacy. The structure had to be an organism of functions at the heart of Agra. It needed to become a beacon of a new age of the last great Empire of India; to bring the Mughals out of history and imbibe them into the lives of its citizens. As the Taj stands as the most romantic monument to death, across the river shall stand ‘Afterglow’. As a functional monument of life.”

With these lines Cadence Architects, a collaborative practice based out of Bangalore, India, framed their response to the competition Black Taj by UNFUZE. The brief was centred around the idea of a Black Taj Mahal on Mehtab Bagh, situated opposite to Taj Mahal, on banks of river Yamuna. The brief demanded design proposals to educate people, address deterioration of context, develop the existing resources and celebrate Mughal legacy. The designs had to act as the missing link between the idea of Black Taj Mahal as a monument that was supposed to be made in the past and the idea of the monument being realised in present time. The solutions had to provide a sense of place to frame their summit, The Taj Mahal, with one unified outcome; and this is where Afterglow with its informative narrative was one of the most noticeable entries in the Top 10.

At a glance, the ‘Afterglow’ is the result of three tangential design approaches – function, form and narrative. It begins with the study of city of Agra and what the design can do at the scale of context of the entire city. Here, the approach taken by Cadence Architects has been to streamline the function. Then, studying and understanding the principles of Mughal Architecture, the symbolism and geometry, the ideals of its design language and beliefs; the form comes together as an ode to their legacy. As a final measure, the form looks forward towards completing the tale, where movement through the monument is compared to ‘singing as a minstrel’. Although the site is not a museum, it does narrate the story of Mughal era. Hence, the design arrives at a junction of starkly opposing connotations given to its function and form, thereby assuming its role as a ‘non-museum’. 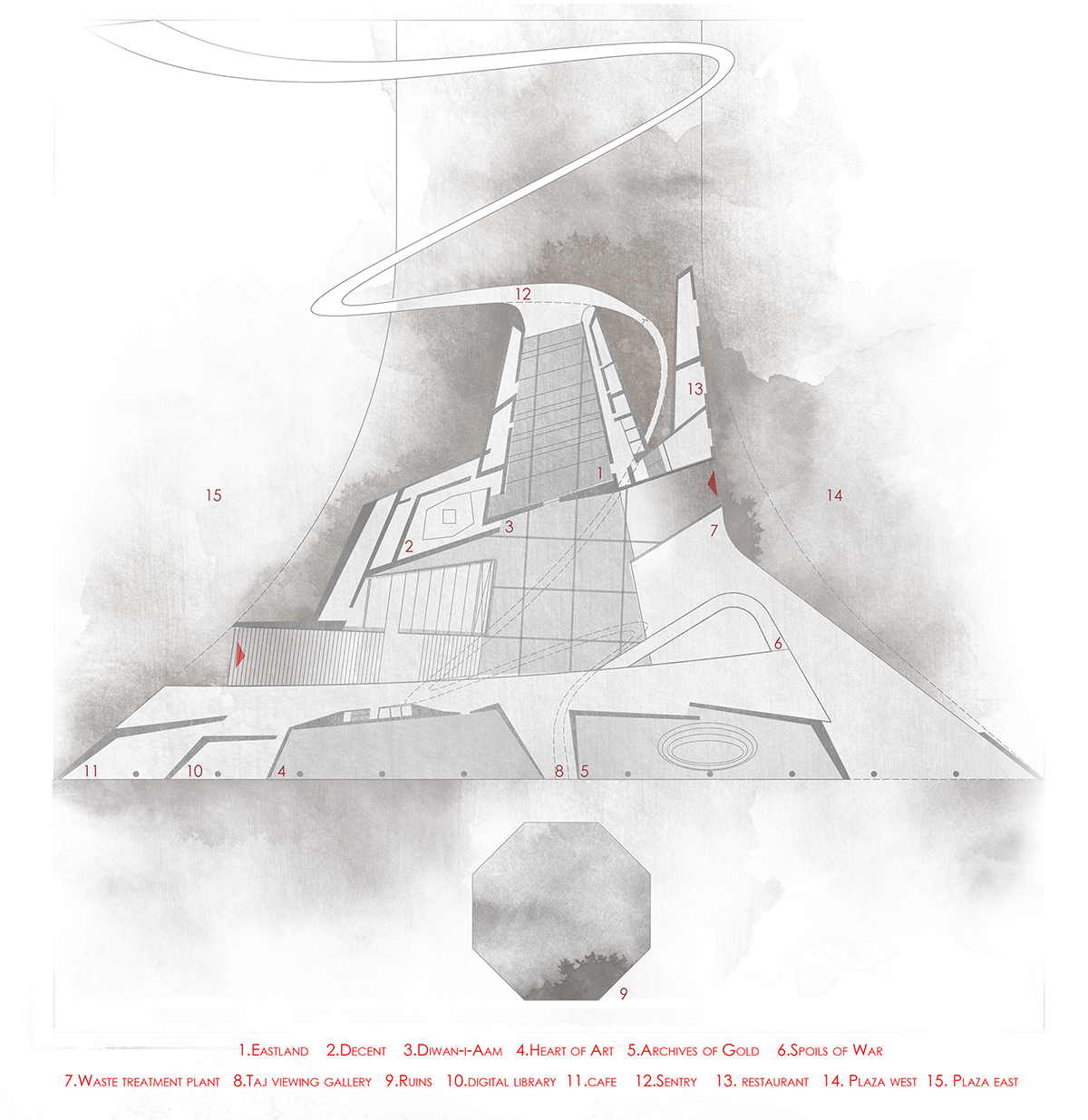 The essential and initial issue for ‘Afterglow’ was to be a monument for the city where it wasn't trying to enact the previous notion of Black Taj by blatantly glorifying rulers of Mughal empire but creating spaces that would subtly find their way into public life and be representative of needs of present time. The first criteria was to solve issues and meet requirements for Agra, ignored in 2021 smart city plan. The issues found to be of prime importance were the waste disposal systems, power shortages and air pollution.

Agra is a city plagued by unplanned dumping of garbage and filth, also causing air pollution in certain localities. By proposing a waste treatment plant, the conceived ‘Black Taj’ would be able to help clear the city of its issues being caused by open burning of waste. If incorporated with urban planning systems and nodes placed across Agra, this plant would, hypothetically, clear the city of its garbage within three months and produce enough electricity to power the city. Continually using this plant would reduce the aforementioned issues and, in time, eliminate them entirely.

Post addressing the city, the goal was to create a space in contrast to the Taj functionally; a space for the people in the city, that addressed the lack of an official platform conserving the culture and art of this city so rich in heritage. It is expected to address the lack of public spaces and city centres, and create a platform for Agra to grow as a tourist city.

Adding public spaces, plazas and markets, visitor centres and tertiary programs such as libraries, convention centres and art centres; the spaces cater to all sections of society by acting as a tourist hub, creating employment, creating platforms for artists, artisans and cottage industry; and to the general populace as a city centre.

In unison with this the Waste to Energy Plant working throughout the day to provide for a cleaner city driven by cleaner energy, the program and functions of the building at an overview encompass numerous activities that serve the populace and tourists as a hub for recreation, learning and growth in a healthy environment. Whilst the non museum approach is used to preserve and educate in terms of history, the planning of this space allows for daily bazaars, art exhibitions and cultural arenas where the artists, artisans and cottage industries of Agra can reach a maximized audience and consumer platforms, catering to the needs of professionals and vacationers alike. 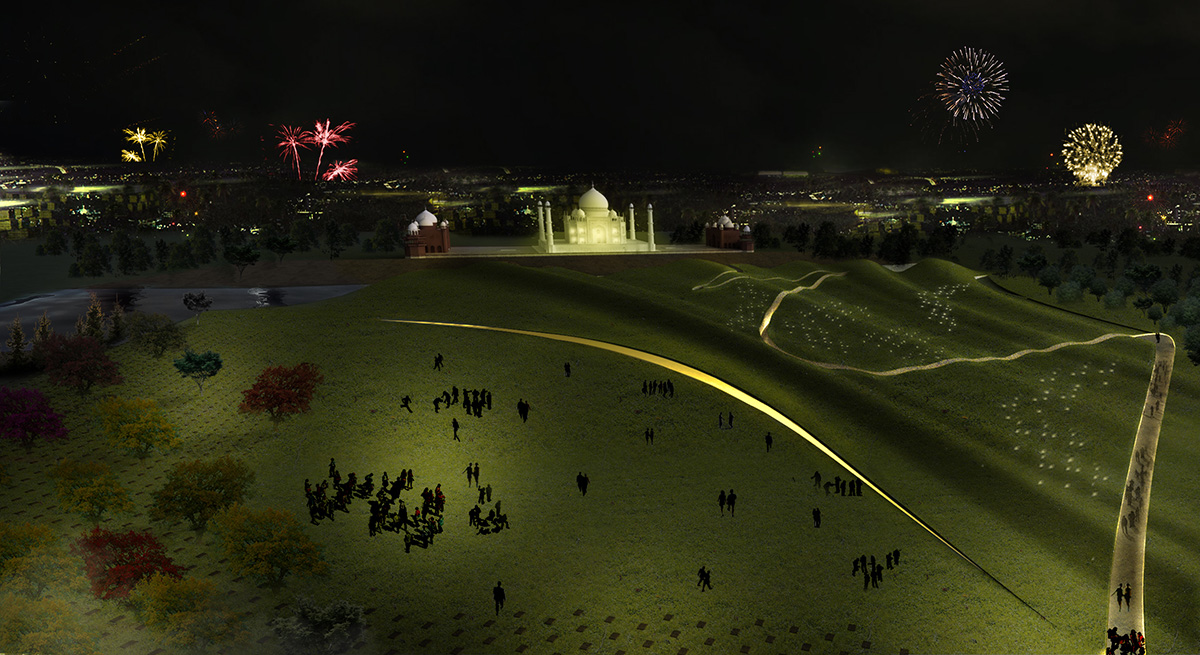 Breaking down the architecture of Mughal era, leaves the design with geometry at its core. The symbols and shapes derived from the teachings of Quran and ideals of Islam have been applied abstractly to the built form to achieve necessary results from the landscape.

Since it is supposed to be the last Mughal monument, ‘Afterglow’ reiterates the same elements at its epicentre. Here the geometry in question is derived directly from Taj Mahal, enabling to recreate the Black Taj as an abstract mirror of existing monument, placed across the river for reflection.

The symbols post abstraction are used to shape the ground itself to rise and accommodate all the functions required of it. Referencing the everlasting impact the empire had on India and showcasing how their contribution helped shape the country; the entire monument is buried underneath rising slowly as it meets the edge of the river.

Formally the building is present in its absence. Thus, at the surface level the design is a large open urban space which can be used in multiple ways by the people of Agra. This subdued identity pays the perfect ode to the Taj Mahal by becoming its largest viewing stage. 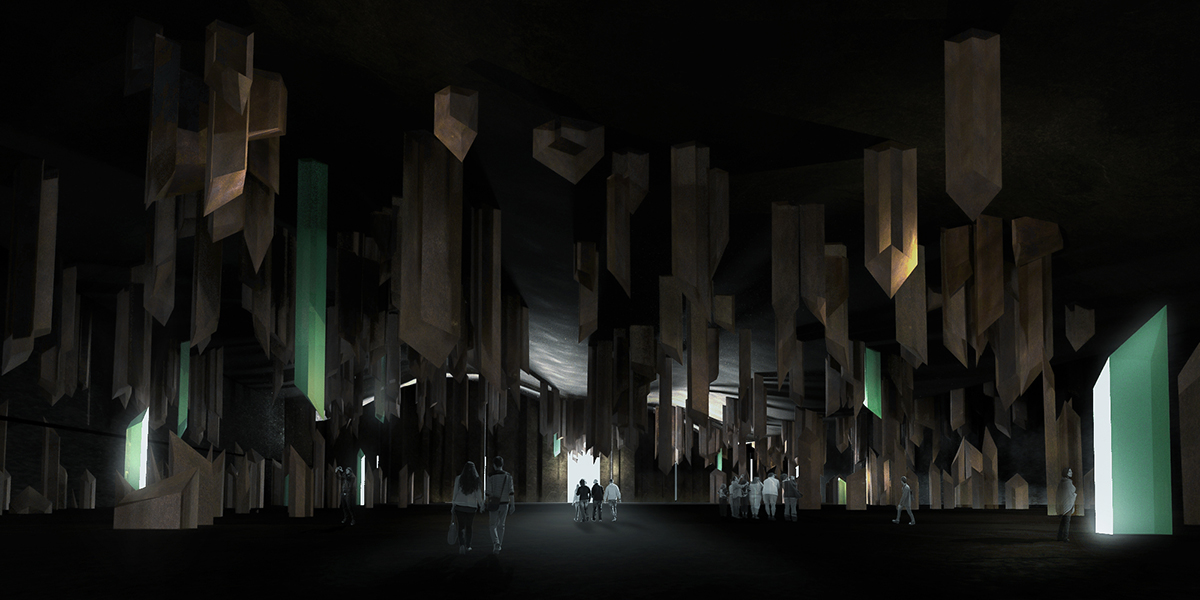 A chronological design solution has been chosen to produce a resultant structure that would cater to the above requirements. Infusing this with the heritage to be preserved is where the challenge came in. This is why, a museum was never an option.

Starting with Babur, known for his seemingly impossible conquests in India and marked for his victory at the third battle of Panipat, the starting spaces remunerate the scenes. As the visitors enter the site, they arrive as Babur did in the mainland – from the East – met by a sculptural representation of the hundred thousand strong army that Babur faced with his five thousand men. The design of the space is such that it consciously conveys to the visiotr the near impossible victory achieved by the Mughal army. As one moves through the space towards the light at the far end, they glimpse the Akbar Plaza and the Taj Mahal in the distance.

Treated as a transition zone, the following space takes the visitor from the great victory of Babur to the ill-fated life of Humayun – the failed son, the betrayed brother and the reconqueror. Descending through the four platforms that represent the broken and divided kingdom, one circles down ramps around this narrow and dark space, at the bottom of which lies a sculptural dedication to Sher Shah’s Tomb on Sarsam Lake. Rays of Light cut through the heavy space reminiscing the few rays of hope that existed for the Mughal empire.

A plaza opens up in a sudden and unpredicatble manner from the transition space. It marks the sudden demise of Humayun, and unpredictable advent of Akbar’s rule. Achievements beyond count, Akbar was undoubtedly one of the greatest monarchs in history. He united the religious sectors under a single kingdom, redefined administrative rule, and designed the famous Fatehpur Sikri. Therefore, as one exits into this space, the greatest period of Mughal rule stretches out in front of them. Markets, auditoriums, convention centres and gardens are all housed under a massive perforated roof. This plaza is the heart of ‘Afterglow’ and is designed as a large indoor public space. Supported by nince columns, inspired by the ‘Navaratna’ in Akbar’s court, the roof is inscribed with hundreds of light perforations symbolic of Akbar’s ideologies and achievements.

His successor, Jahangir, was an artist on the throne, who established the Mughal School of Art. His rule was marked by peace, hence, the space is designed to represent the heart of Jahangir and treated as an Art Centre. A massive wall mural programmed to be repainted on occasion by artists of Agra, tells known and lesser known history of Mughal School of Art. The columns in this space are treated as exhibition pedestals, which lead to a learning centre with libraries and workshops representative of the functional rule of Shah Jahan. A learned warrior, the space portrays his love for knowledge. The dip in the floor slab draws from his Southward conquests and the view of the Taj through the narrow passageway sings of his last year.

The trail then directs the visitor to the kingdom’s last ruler, Aurangzeb – the most capable and the most failed. As the visitors come to the end of the story, the pathway dedicated to Aurangzeb carves out and away from the risen Mughal empire. The ramp used is lined by sculptures reminiscing achievements of Aurangzeb’s conquests. The flooring of the ramp is broken and jagged, representing temperament of his rule. As the ramp curves over Akbar’s plaza it makes no contact with it or its meaning. It is a metaphor for possible reasons for the downfall of the empire, ending at the ruins... 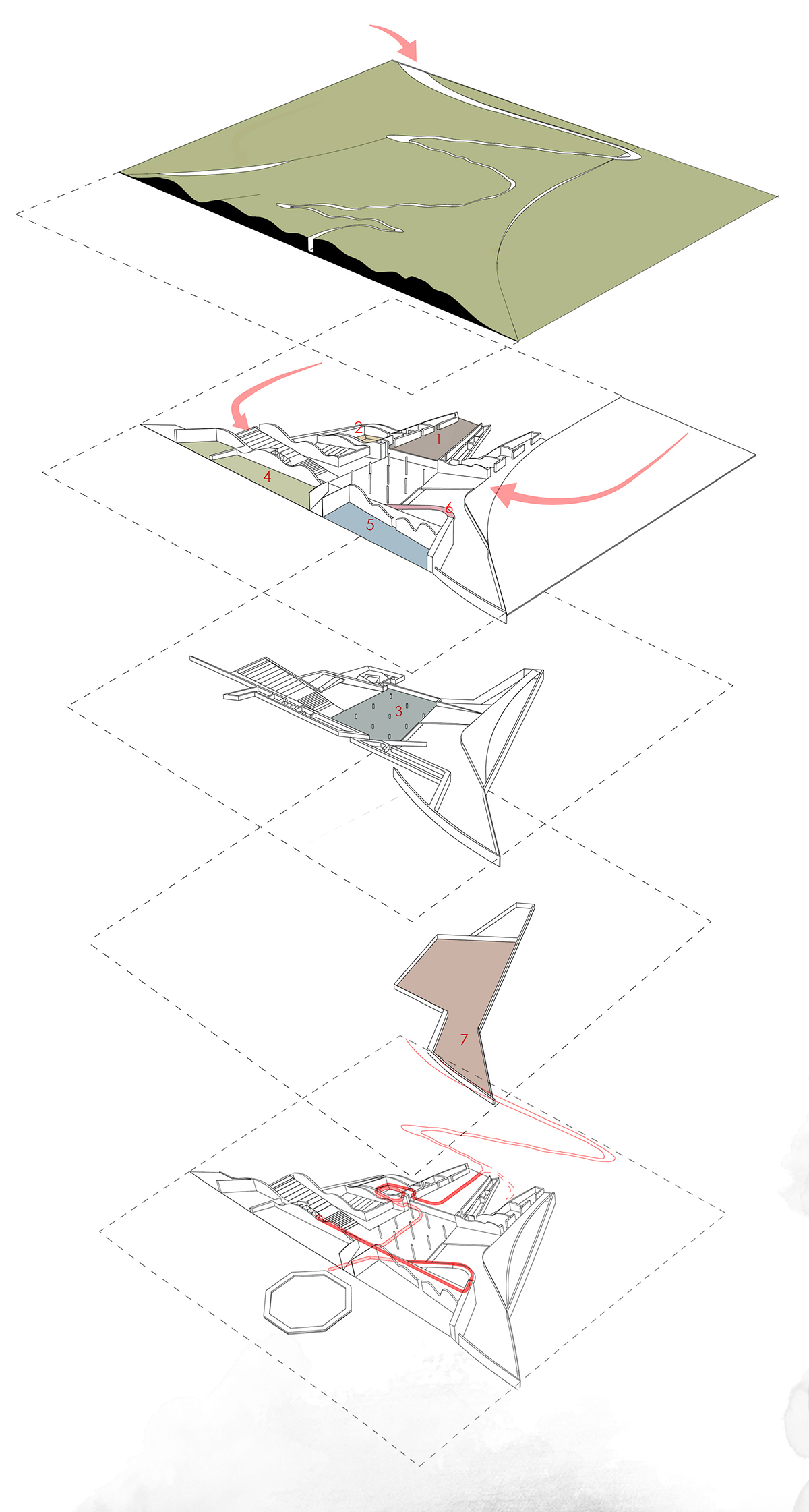 At the end of the narrative is where the rest of the story begins. Moving away from the ruins, visitor enter the visitor centre and Waste to Energy plant to learn about its processes and view Taj Mahal simultaneously. A tourist may go through the internal pathway where the proposal sings the entire story of the Mughal Empire while a visitor who wishes to go through the library has direct access to it via an external pathway situated on the roof structure of the project. A separate system is set up for the Waste treatment plant, so it may not interfere with the activities of the rest of the project.

The Black Taj is a modern monument that contributes to the city of Agra - a ‘monument-al’ urban incubator, a solution and a story. Socially, it creates a non hierarchical and democratic space. The proposal caters to all sects of society by having programs that are malleable enough to fit requirements of all - from a Bazaar for cottage industries to libraries for students, from Auditoriums for performers to employment for the unemployed.

Ecologically, it enhances the green cover and saves all the trees on site along with inserting a waste management plant that causes no air pollution while cleaning up the city.

At the urban level it enables people to celebrate a great legacy. It creates a public space at the scale of a city and becomes the perfect foreground to the Taj Mahal.

It portrays a thorough understanding of the Mughal history socially, politically and culturally across time evident in the formulation of its program. It critically analyzes Mughal architecture, study types, tropes, patterns, spaces, forms etc. to create a projective diagram for the new proposal. It showcases concept of a building needed to be a public space to the city of Agra in the most understated way.

What makes the building work are the multiple experiences and methods of experiencing them that the three layered interventions of form, function and narrative provide through a phenomenological representation of history with framed views of the Taj Mahal.

All images courtesy of Cadence Architects