A sinuous-formed UK's new football stadium -entirely made of wood-will be designed by Zaha Hadid Architects in Stroud, UK. Forest Green Rovers has announced Zaha Hadid Architects as the winner of competition for its new football stadium. Rovers announced the competition in March this year, and quickly received over 50 entries from around the world, including Sweden, Germany, France, Britain and the United States.

In May, the club shortlisted nine entries, and gave them all two months to work up their concepts, which were reviewed over two days in August, leading to the selection of two finalists. The final two were given another two months to take their concepts further, including a scale model. The competition is now over, and the winning design comes from Zaha Hadid Architects. 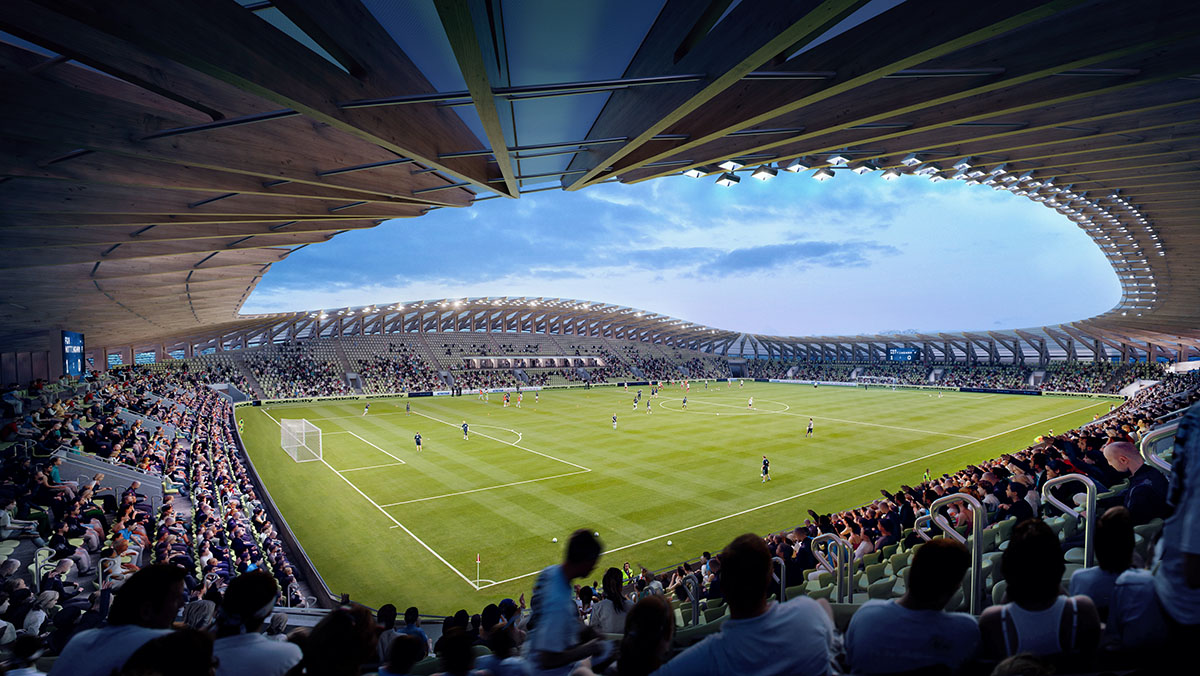 ''The really standout thing about this stadium is that it’s going to be almost entirely made of wood – the first time that will have been done anywhere in the world. The importance of wood is not only that it’s naturally occurring, it has very low embodied carbon – about as low as it gets for a building material.''

''And when you bear in mind that around three quarters of the lifetime carbon impact of any stadium comes from its building materials, you can see why that’s so important – and it’s why our new stadium will have the lowest embodied carbon of any stadium in the world.''

''We’re thrilled with the concept and the amount of thought Zaha Hadid Architects put into their design – their experience of stadia design and their ability to put environmental issues at the heart of what they do really stood out. They took a really challenging brief, ran with it, and have given us an innovative and original new stadium.'' 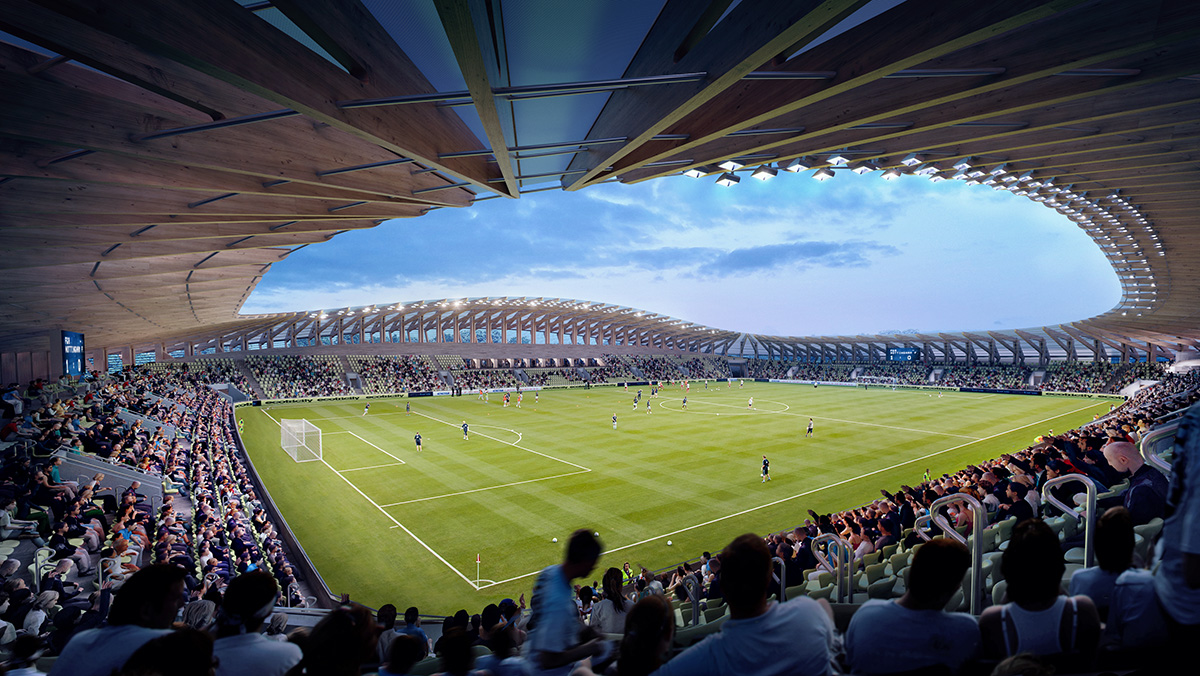 ''We’ve done as much as we can to make our current stadium properly sustainable, but we are limited with what we can do – it simply wasn’t built with the environment in mind. At Eco Park, we’ve started with a blank sheet of paper, and we’ll be going further than anyone has done before – this really will be the greenest football stadium in the world.''

''We are very proud be selected to design the new home for Forest Green Rovers that will not only be a new stadium but also an important addition for the community. The club’s heritage, ambition and vision reflect our own, combining the latest material research and construction techniques with new design approaches to build a more ecologically sustainable and inclusive architecture,'' said Jim Heverin, Director at ZHA.

“Forest Green Rovers have established a holistic vision for the site to retain its pastoral qualities whilst adding new facilities for the town. While the stadium will be the centrepiece, the project creates a new public realm with both recreational and occupational uses, enabling the entire site to contribute to the town - not only on match days, but every day of the year." 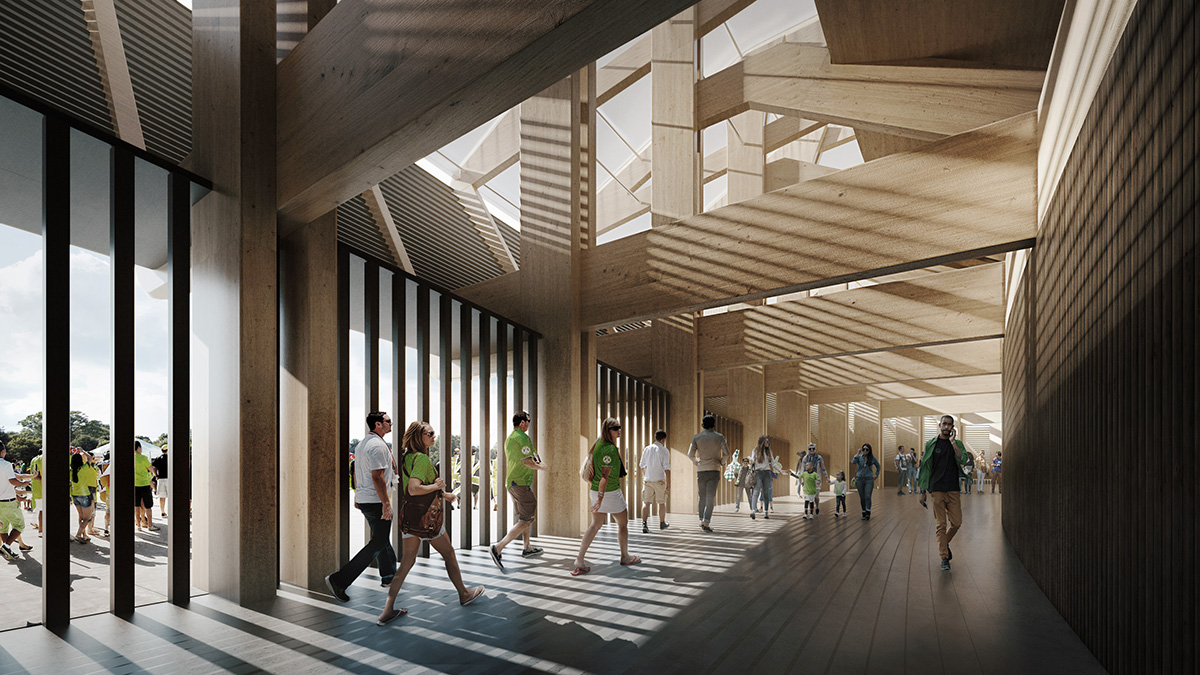 “The design retains and enhances the existing meadow landscape of the site whilst adding the stadium and other functions for the town. Embodying low carbon construction methods and operational processes, it will be the first all timber football stadium with almost every element made of sustainably sourced timber including its structure, roof cantilevers and louvered cladding."

"As a building material, timber is highly durable, recyclable and beautiful. The proximity of the stadium’s structural elements to each other has also been determined to enable the seating terraces and floor slab to be made from timber. In most other stadiums, these elements are concrete or steel."

“The stadium’s roof is covered with a transparent membrane, which contributes to turf growth, minimizes stark shadows for players and fans and reduces the volumetric impact of the stadium from distant views in the surrounding landscape.

“With the team’s community and supporters at its core, fans will be as close as five meters from the pitch and the position of every seat has been calculated to provide excellent, unrestricted views of the entire field of play. The stadium’s continuous spectator bowl surrounding the pitch will maximise matchday atmosphere."

“The stadium’s design incorporates the club’s future growth. Initially for 5,000 spectators, increasing to 10,000 with the club’s success, expansion from phase 1 to phase 2 can be achieved without the costs of major construction works." 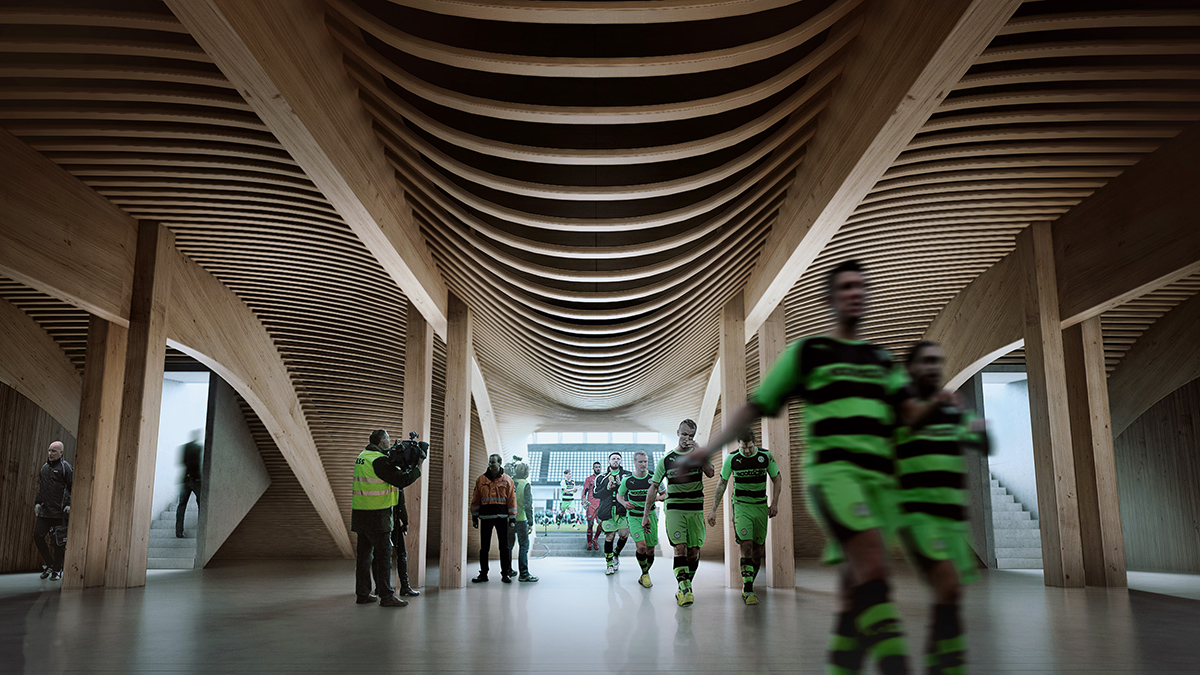 “Forest Green Rovers’ new stadium and Eco Park aims to be carbon neutral or carbon negative, including measures such as the provision of on-site renewable energy generation. The buildings on the site, and their embodied energy, play a substantial role in achieving this ambitious target and demonstrate sustainable architecture can be dynamic and beautiful.”

The runner-up competition entry came from Glen Howells Architects, the firm who designed the award-winning Gloucester Services on the M5. ''Glen Howells also produced an exceptional design – and they impressed us as much as their design did actually. As a result, we’re going to work with them on some future projects,'' Dale said.

The Zaha Hadid Architects’ designed stadium will be the centrepiece of the £100million Eco Park development – Ecotricity’s 100 acre sports and green technology business park proposal, beside junction 13 of the M5 in Gloucestershire. Half of Eco Park will consist of state-of-the-art sporting facilities, including the new stadium, grass and all-weather training pitches, publicly accessible multi-disciplinary facilities, and a sports science hub. 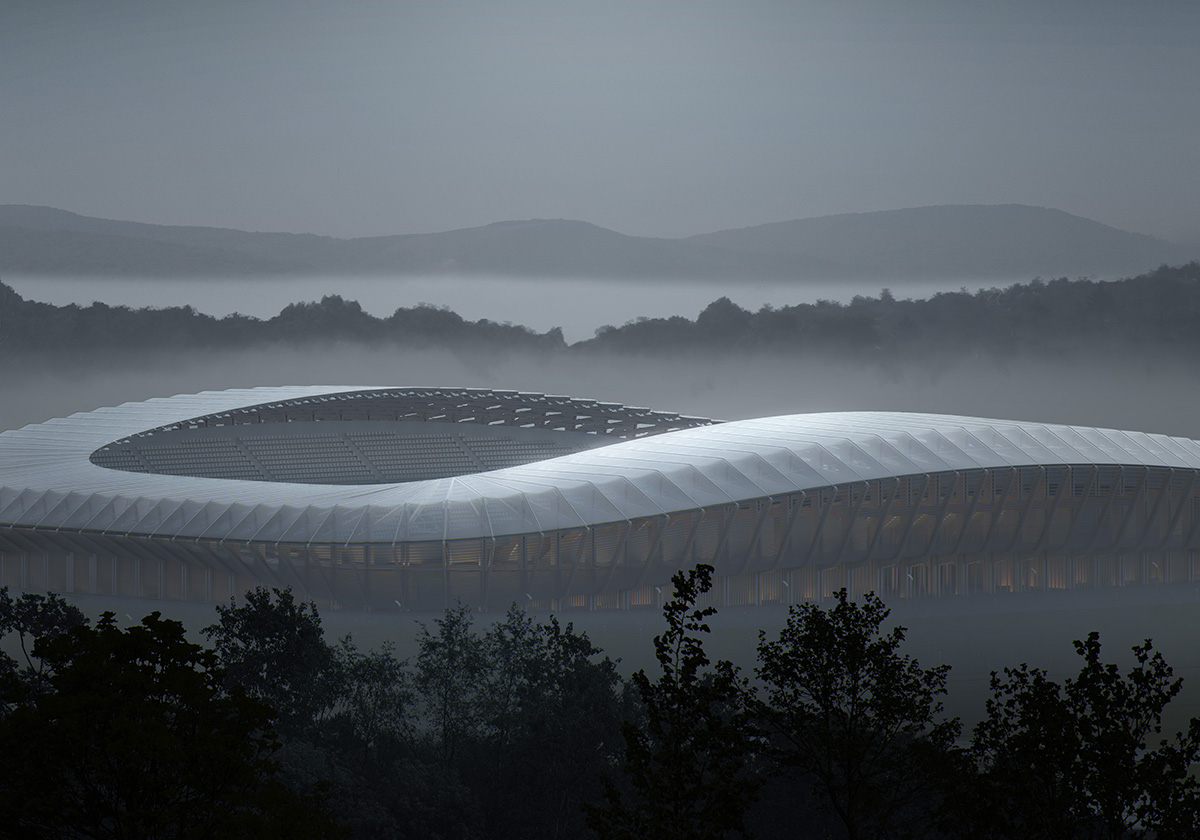 The other half will comprise a green technology business park with sustainably built commercial offices and light industrial units, giving Eco Park the potential to create up to 4,000 jobs, including room for the continued expansion of green energy company Ecotricity, who have submitted the overall proposal and who are already the biggest employer in Stroud with 700 people located across four sites.

The proposal will also see the development of a nature reserve on the site, a potential public transport hub, including a Stroud Park and Ride, as well as help with the restoration of the Stroudwater canal.