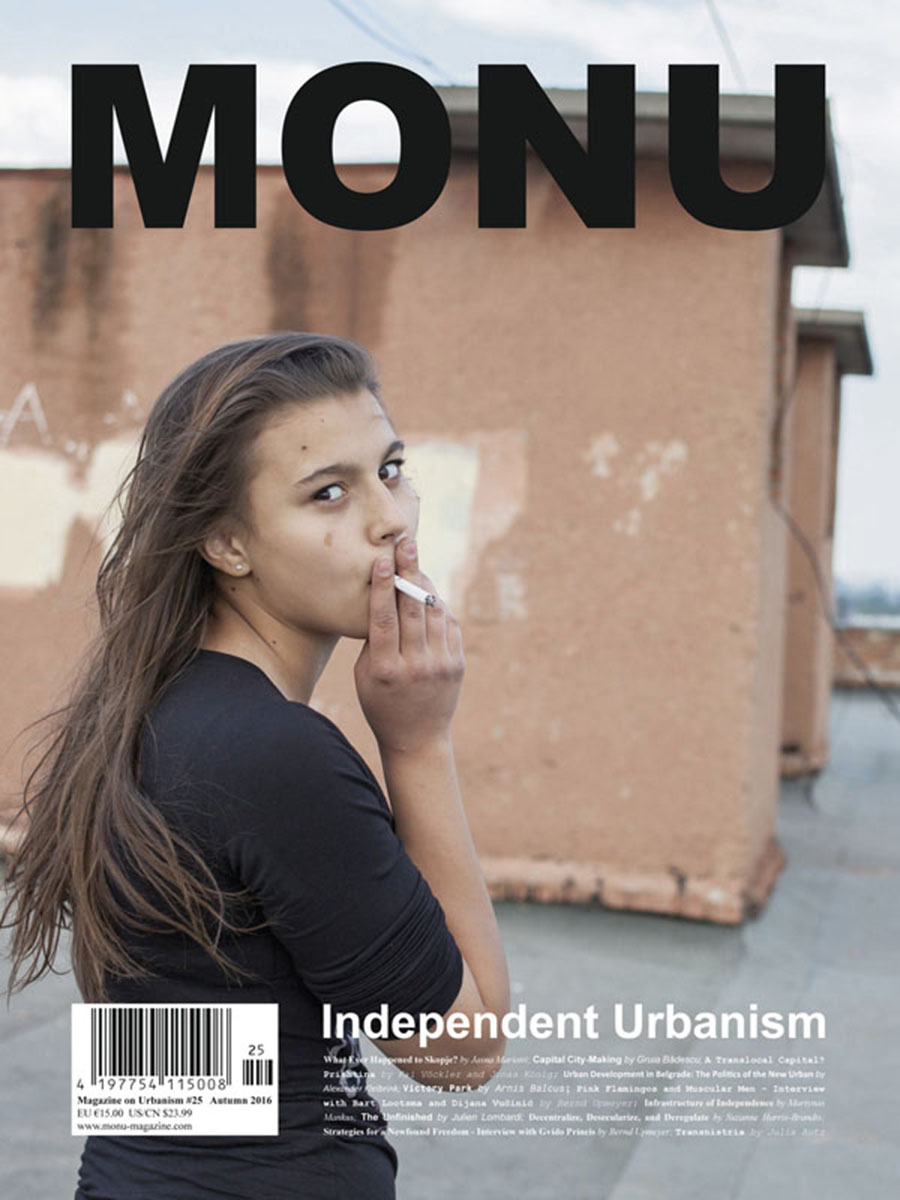 MONU is an English-language, biannual magazine on urbanism that focuses on the city in a broader sense. MONU 25 has the title Independent Urbanism. A city in a country that recently gained independence is likely to undergo processes of radical transformation and massive restructuring and re-imagining that are not only societal, political, and economic in nature, but can also impact the planning system of a city and influence its built-up environment.

Re-imagining that are not only societal, political, and economic in nature, but can also impact the planning system of a city and influence its built-up environment. Jasna Mariotti makes this quite clear in her contribution to MONU 25, entitled “What Ever Happened to Skopje?”.

This new issue of our magazine deals with various phenomena impacting cities of countries that became newly independent which we call “Independent Urbanism”. She shows how the centre of Skopje in Macedonia has been remodeled according to an image of the city that never existed as such. Obviously, many “independent” cities are facing major struggles and difficulties in finding their new identity that usually have a lot to do with the fact that the “birth of a country” is a contested process often involving political turmoil, institutional instability, and economic turbulence as Kai Vöckler and Jonas König put it in their article “A Translocal Capital? Prishtina”.

The way monuments and public spaces that are loaded with a “dependent” past can add controversial issues, collective and personal contradictions, and traumas to this process is illustrated by Arnis Balcus in his photo essay “Victory Park”. According to Dijana Vucinic, preserving identity within the cities and cultures that are heading towards the EU is one of the biggest challenges for a country such as Montenegro and for other countries that went through very significant transformations after the era of socialism, as she stated in an interview with her and Bart Lootsma entitled “Pink Flamingos and Muscular Men – Independence is a Relative Phenomenon”.

To what extent urban and public infrastructure can help here as an important element of nation building and even be instrumentalized to instigate, stimulate, and secure the growth of cities, is explained by Martynas Mankus in his text on “Infrastructure of Independence”. Whether so-called “Free Industrial Zones” can be successful strategies for “independent” cities to thrive is discussed by Suzanne Harris-Brandts in her contribution “Decentralize, Desecularize, and Deregulate” in which she highlights the situation and transformation of the city of Kutaisi in Georgia.

There seems to be no doubt that an opening up to independent views, different approaches to urbanism, and a building up of international networks are crucial steps for the successful development of “independent” cities. At least this is what Gvido Princis, the director of the Riga City Architect’s Office, argues in MONU 25 when he reflects on his experience in the city of Riga in Latvia, in our second interview entitled “Strategies for a Newfound Freedom”. Only then “independent” citiesmight get a chance to develop in a way that enables them to fulfil the dreams of a more colourful and more hopeful world especially for the younger generation, as Julia Autz emphasizes with her photo series “Transnistria”.

Cover: Image is courtesy of Julia Autz. The image is part of her contribution “Transnistria” on page 121. ©Julia Autz.