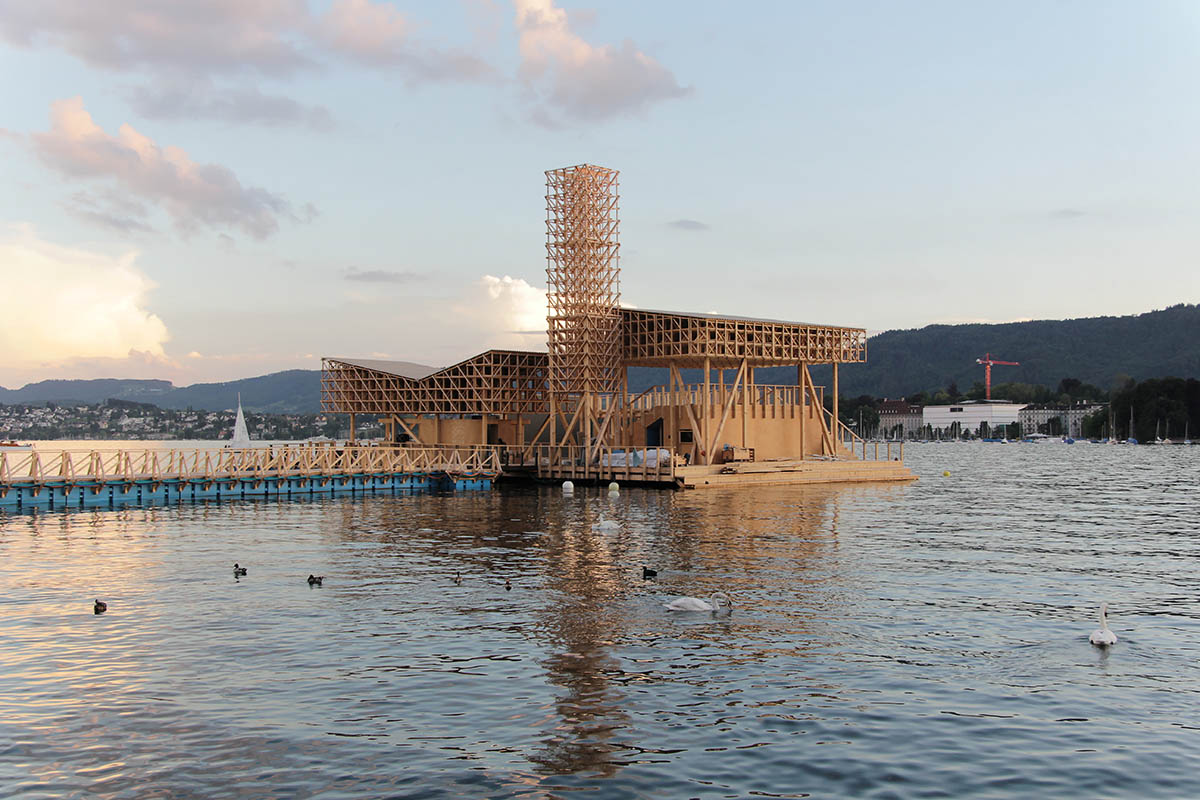 Thirty architecture students from ETH Zurich’s Studio Tom Emerson have made their first venture into a large-scale project. After ten months of intensive work, the Pavilion of Reflections opened at the heart of Manifesta 11 European Biennial of Contemporary Art in Zurich. Manifesta 11, the European Biennial of Contemporary Art will be on view from June 11 through September 18, 2016 in Zurich.

The Pavilion of Reflections was moored at Bellevue, Zurich. For 100 days, the pavilion will act as a nucleus and focal point for the thousands of visitors to the Manifesta 11 European Biennial of Contemporary Art in Zurich. The pavilion’s 150 tonnes of wood and steel had to be hauled by barge across the lake from the Mythenquai to Bellevue. The unique project, which involved some 30 students from ETH Zurich’s Department of Architecture, has now been successfully completed. 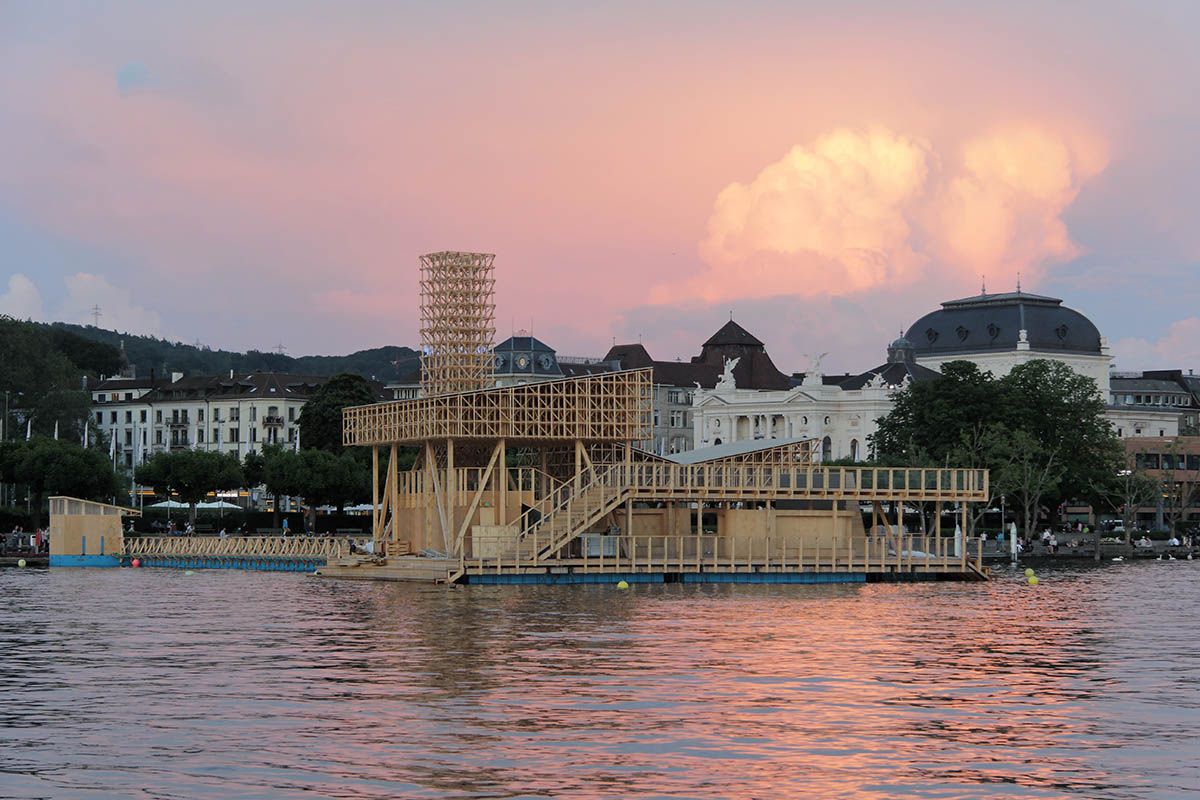 The students also had to coordinate with the many experts participating outside of the build itself. Image © Wolfgang Traeger, courtesy of Manifesta

Professor Tom Emerson took on the project in summer 2015, along with his assistants Boris Gusic and Adrian Heusser. “We've never carried out a project of this scale with students before,” says Gusic. The studio does frequently build pavilions with students, but these are much smaller structures that can be put together in a shorter timeframe – all but one of them were designed and built in less than two weeks. 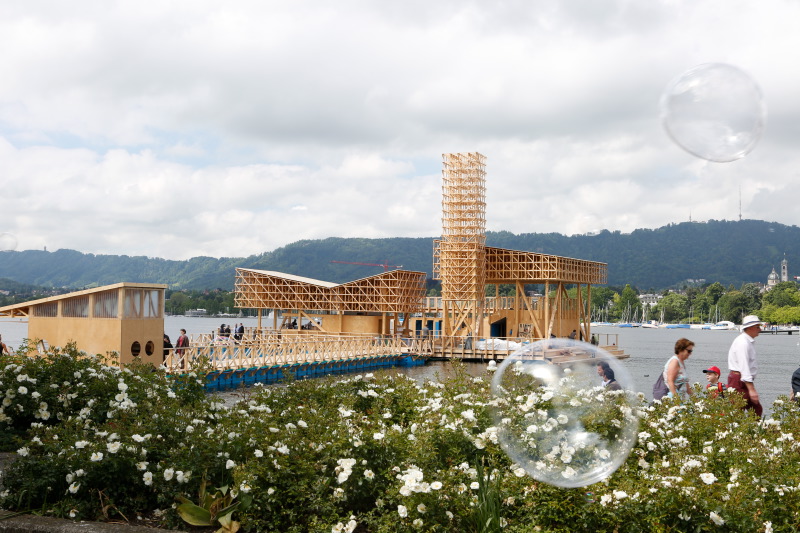 The steel structure was the result of a collaboration with Willy Stäubli AG at the port of Bäch (SZ), while the students got help from the apprentices at the Gewerbliche Berufsschule Wetzikon during the first week of the pavilion's construction. Image © Wolfgang Traeger, courtesy of Manifesta

''It has always been a privilege to work with the students at ETH but to be able to realise an important cultural project in lake Zurich is a once in a lifetime opportunity for everyone concerned,'' says Professor Tom Emerson. ''The students’ imagination for the Pavilion of Reflection is matched only by their tenacity to realise it in all its complexities with exceptional skill. It is an unforgettable experience for us, the students and hopefully for all of Zurich too.'' 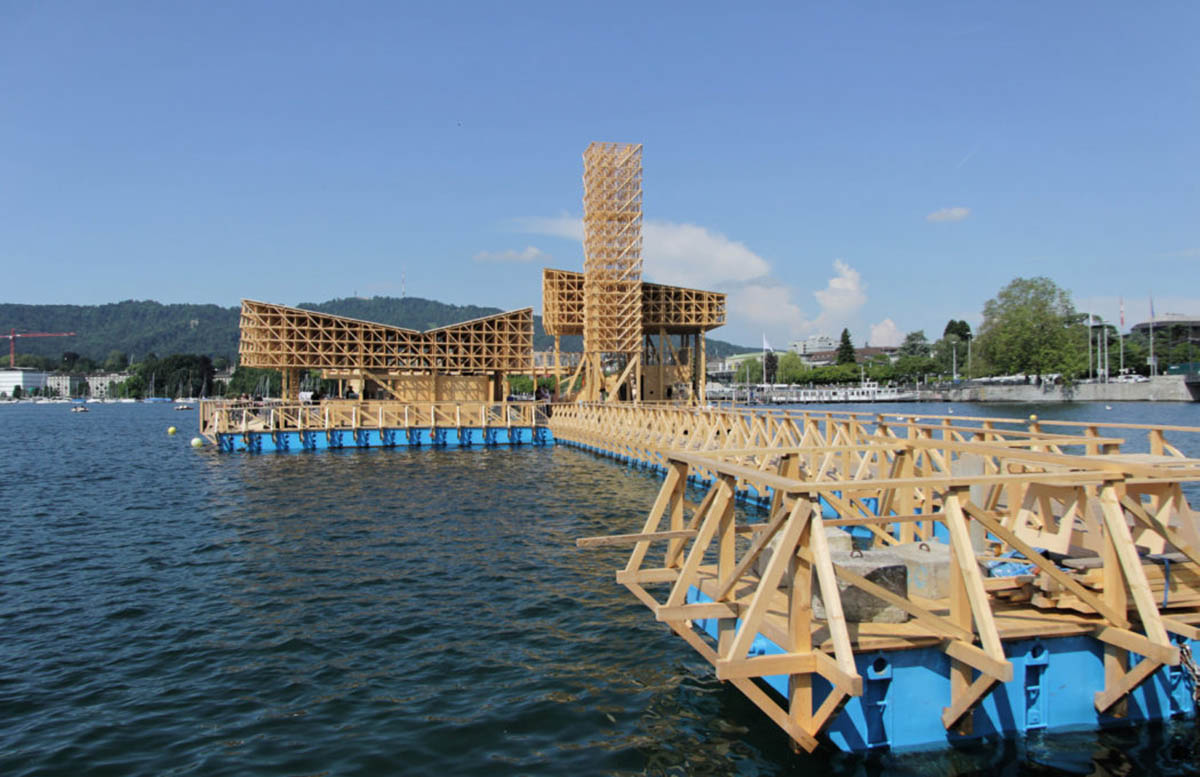 In order to have the pavilion ready on the Mythenquai in under four weeks, the 30 ETH students spent their winter semester holidays bolting together parts in an assembly hall in Winterthur Grüze. Image © Wolfgang Traeger, courtesy of Manifesta

The Manifesta pavilion is on a different scale altogether: it has a 600m2 footprint, required extensive planning time, and must meet specific requirements. As the pavilion is a public building that can accommodate up to 300 visitors, it has to comply with all fire safety regulations. On top of this, the Manifesta organisers laid down some challenging guidelines: it had to be a floating structure featuring an outdoor swimming pool and toilet facilities, as well as a spectator stand and a large screen for showing films. 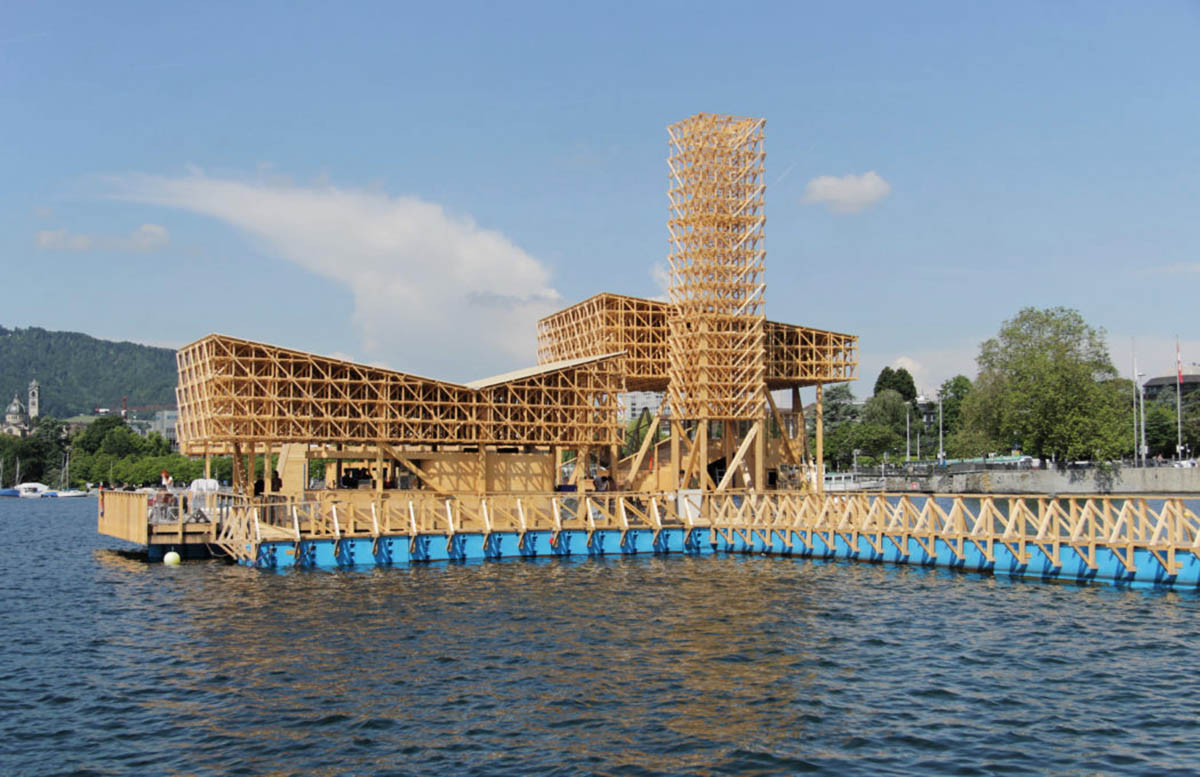 The project is ready for its first visitors. From 11 June, you will be able to walk across the 50-metre-long jetty to the Manifesta pavilion and watch films about the Biennial’s featured artworks, order drinks and snacks at the bar, or cool off in the pool. Image © Wolfgang Traeger, courtesy of Manifesta

''We began planning on 4 August 2015, way before the start of term,'' recalls Kathrin Füglister, a Master’s student in Architecture in her seventh semester. In order to give the pavilion its distinctive appearance, the 30 students came up against each other in a competition. ''There were a lot of promising designs that we combined and developed,'' says Anna Maria Stallmann, a Master's student in Architecture in her eighth semester. While some of the students worked on fine-tuning the design in small groups, others built pavilion prototypes on the roof of the HIL building on ETH’s Hönggerberg campus. 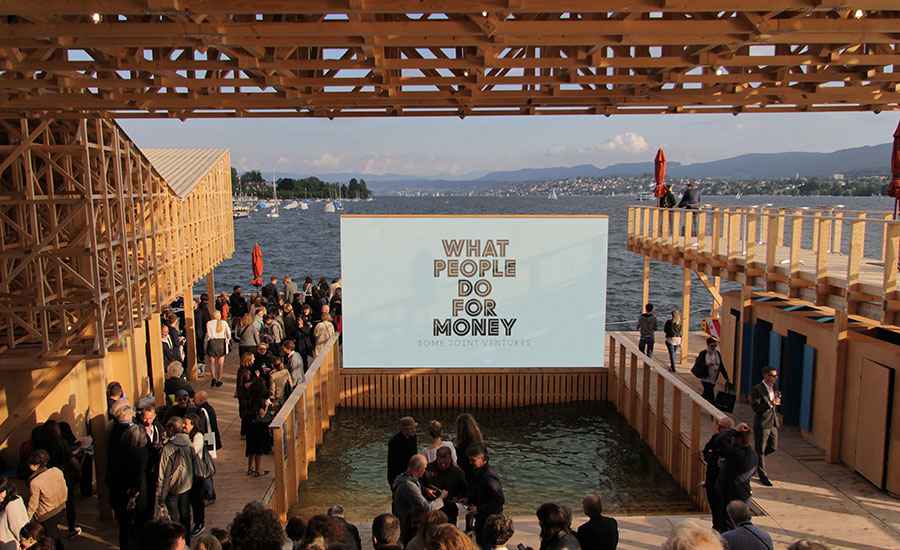 ''It makes an amazing change from day-to-day student life, and we were able to see a project through from start to finish for the first time,'' says Stallmann. Egli adds that working on the project gave him the first real taster of what it's like to work as an architect. 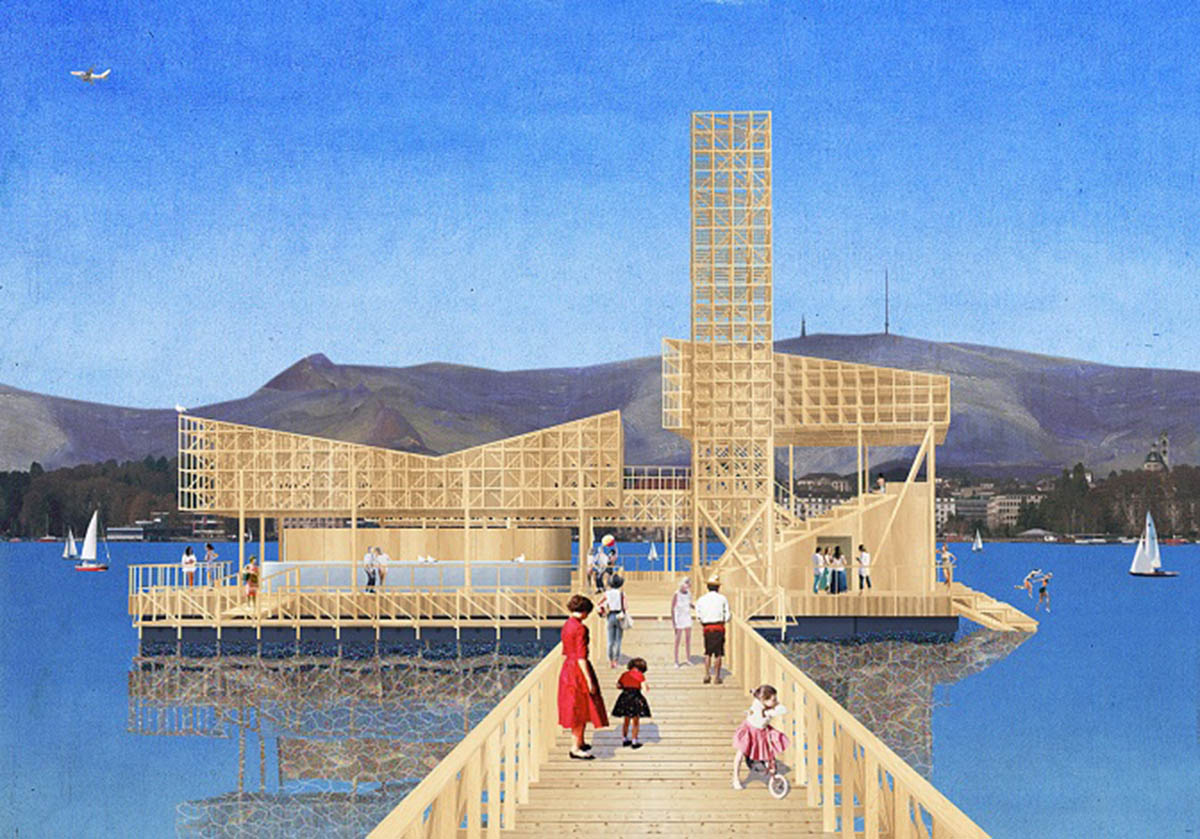 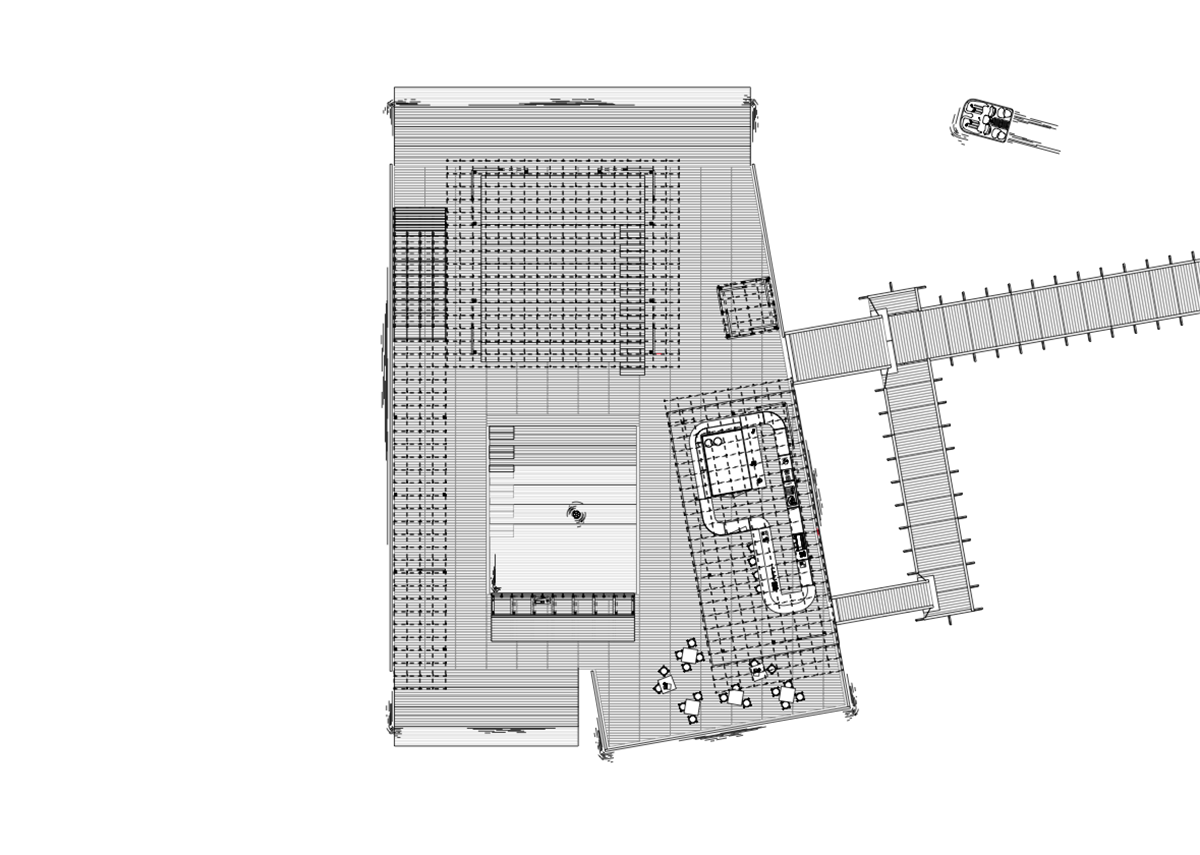 Plan of the Pavilion. Image courtesy of Studio Tom Emerson 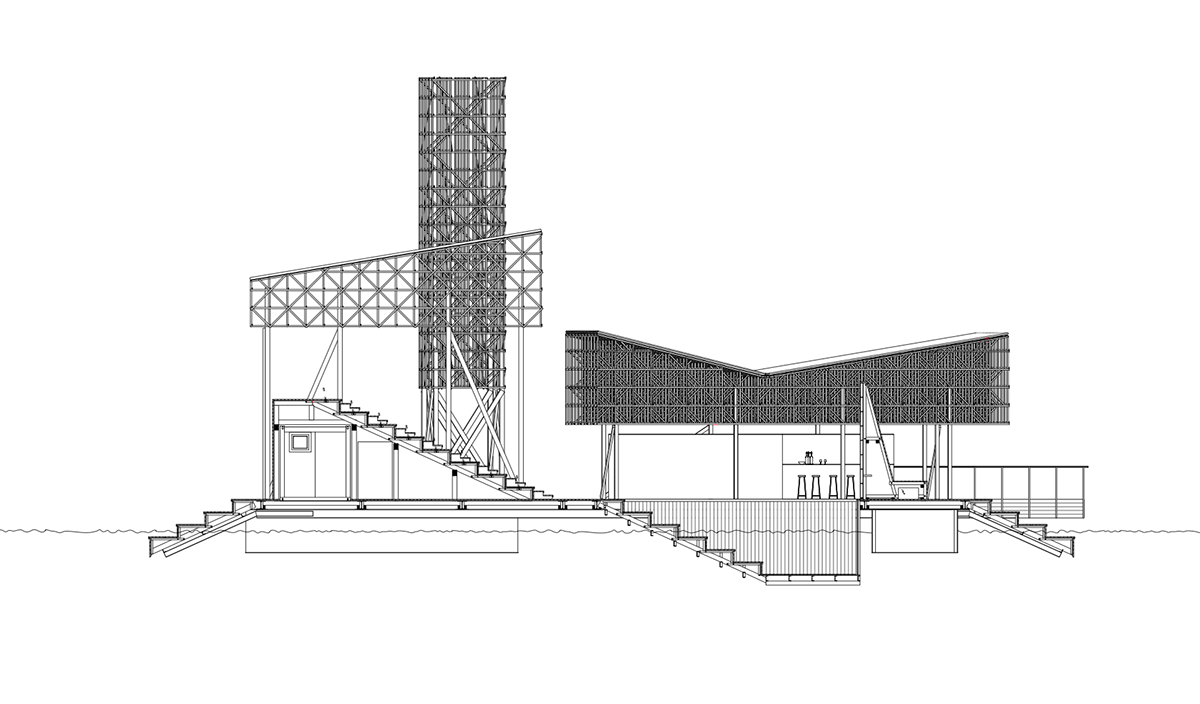 Section of the Pavilion. Image courtesy of Studio Tom Emerson