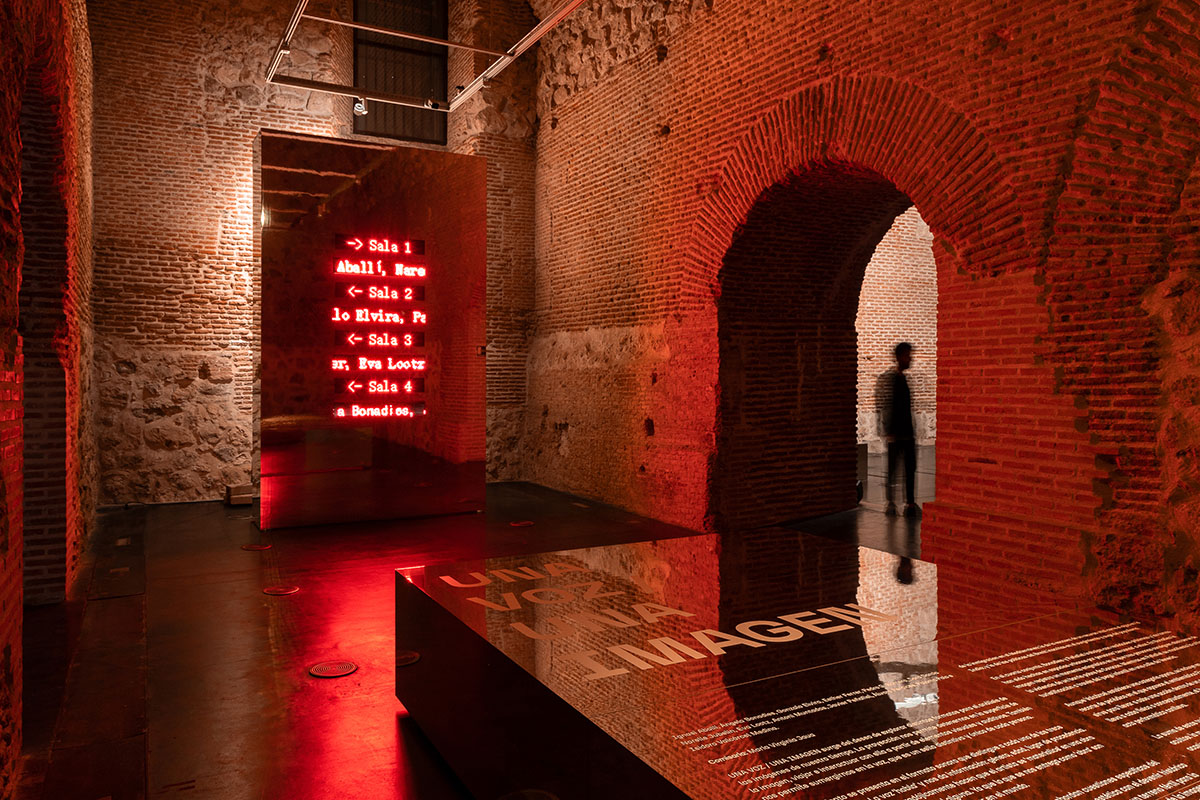 An exhibition design by architecture practices Solar and Marta Jarabo has played with red light, mirrors and reflections at Condeduque Center’s vaulted hall in Madrid, Spain.

The exhibition, titled ONE VOICE / ONE IMAGE, is presented in a diffused, bold red atmosphere where visitors can perceive two dimensions, between presence and representation.

In addition to presenting the space in a new dimension, the use of all the display pieces in the exhibition space from recycled materials forms the essence of the project. 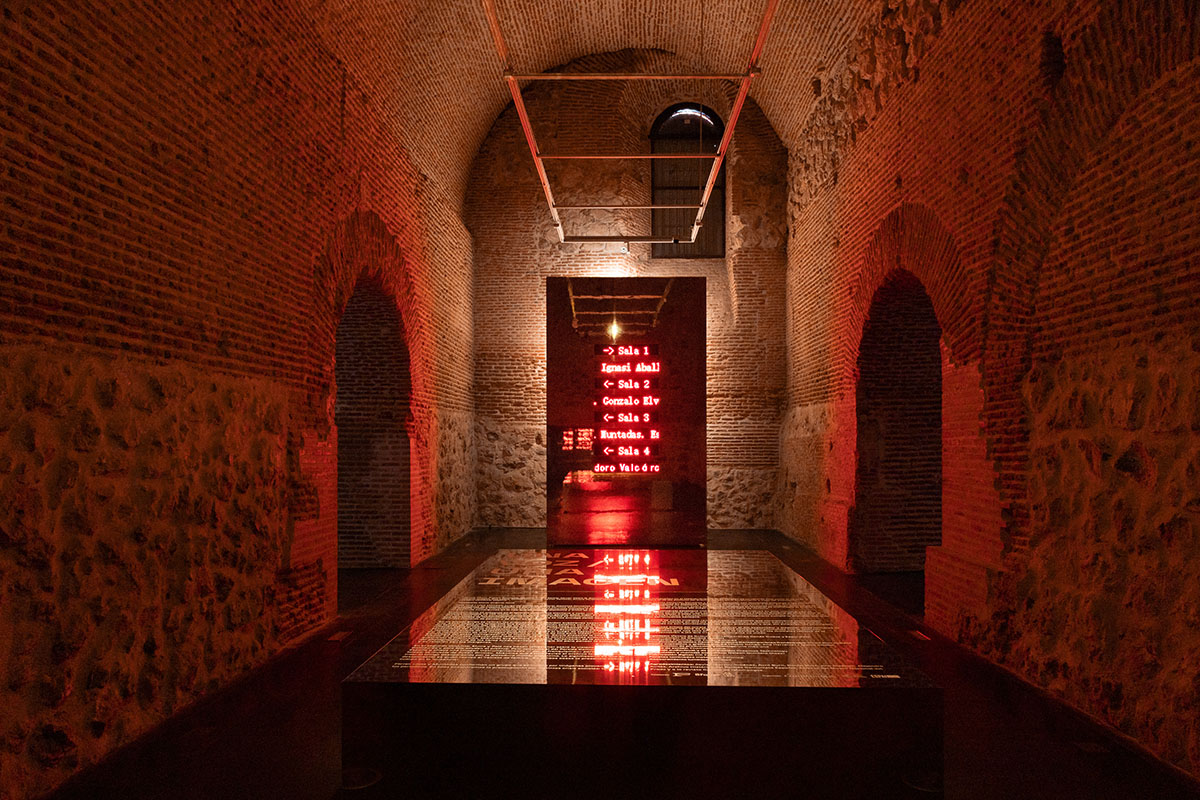 Curated by writer and publisher María Virginia Jaua, she narrated the exhibition in her own words that "the exhibition ONE VOICE / ONE IMAGE was born out of a desire to explore different ways of analyzing images of our time — “like two dimensions, between presence and representation."

"The result is presented in sound form: thirteen oral deliveries, one by each of the artists invited, who “reflect on images that sometimes are not strictly of their making, but which nevertheless inhabit their creations." 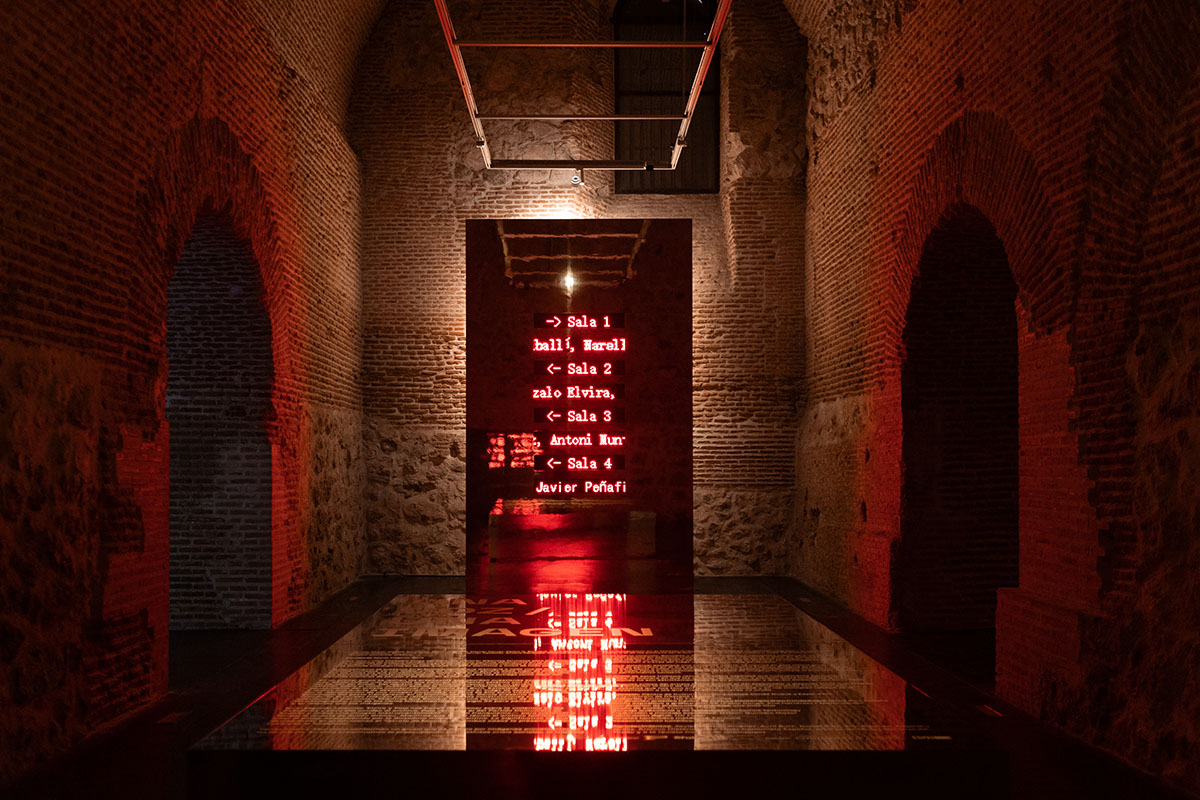 In addressing to the goal of the exhibition, and the historical and symbolic weight of the Condeduque Center’s vaulted hall, Solar in collaboration with Marta Jarabo used the mirror to reflect the concept of immateriality through a single element.

According to the studio, this decision could have played a key role in generating a duplicity of reality, while the exhibition pieces and the furniture are producing a play of reflections, simultaneously dissolving in the space, multiplying, and expanding their meanings. 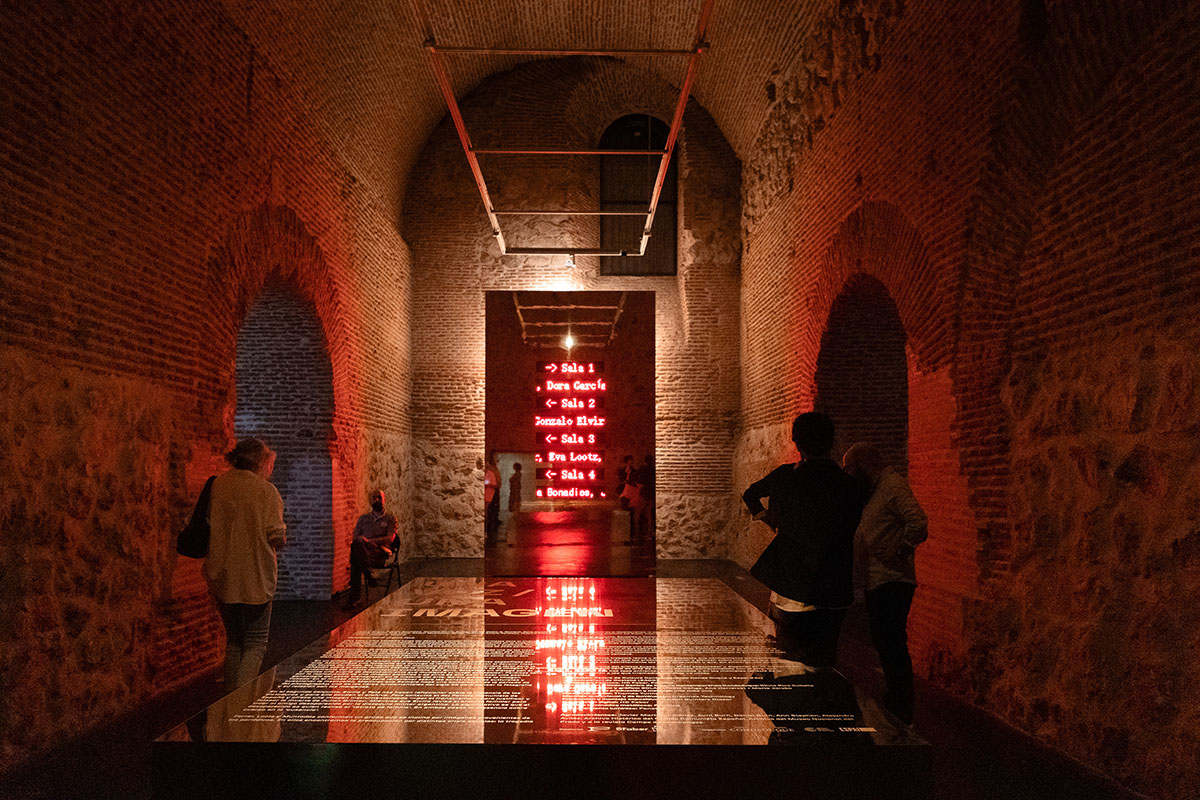 The essence of the project is perceived deeply in the entrance vault. The studio created two abstract volumes of the same size – one vertical, the other horizontal – to welcome the visitor and give the information necessary for them to understand the show and move through it freely.

This design approach also improves upon traditional exhibition schemes in which graphics and architecture operate separately, as the studio explained. 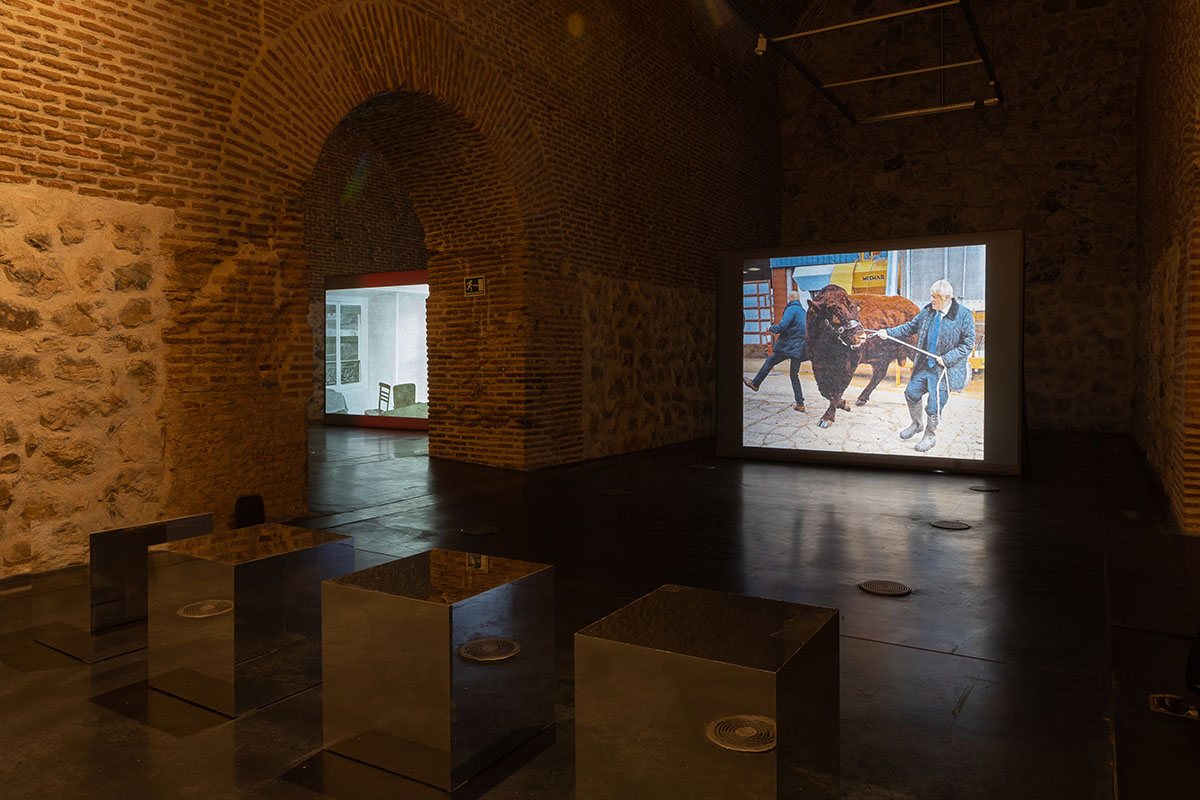 In the rooms, the displaying works of the artists are organized into four themes: art, sociology, city, politics, whose voices flood the four remaining vaults, there are hardly any of the mirror-clad seats seen in the entrance hall.

The recycling of disused materials is fundamental part of the project, contributing to circular economy. 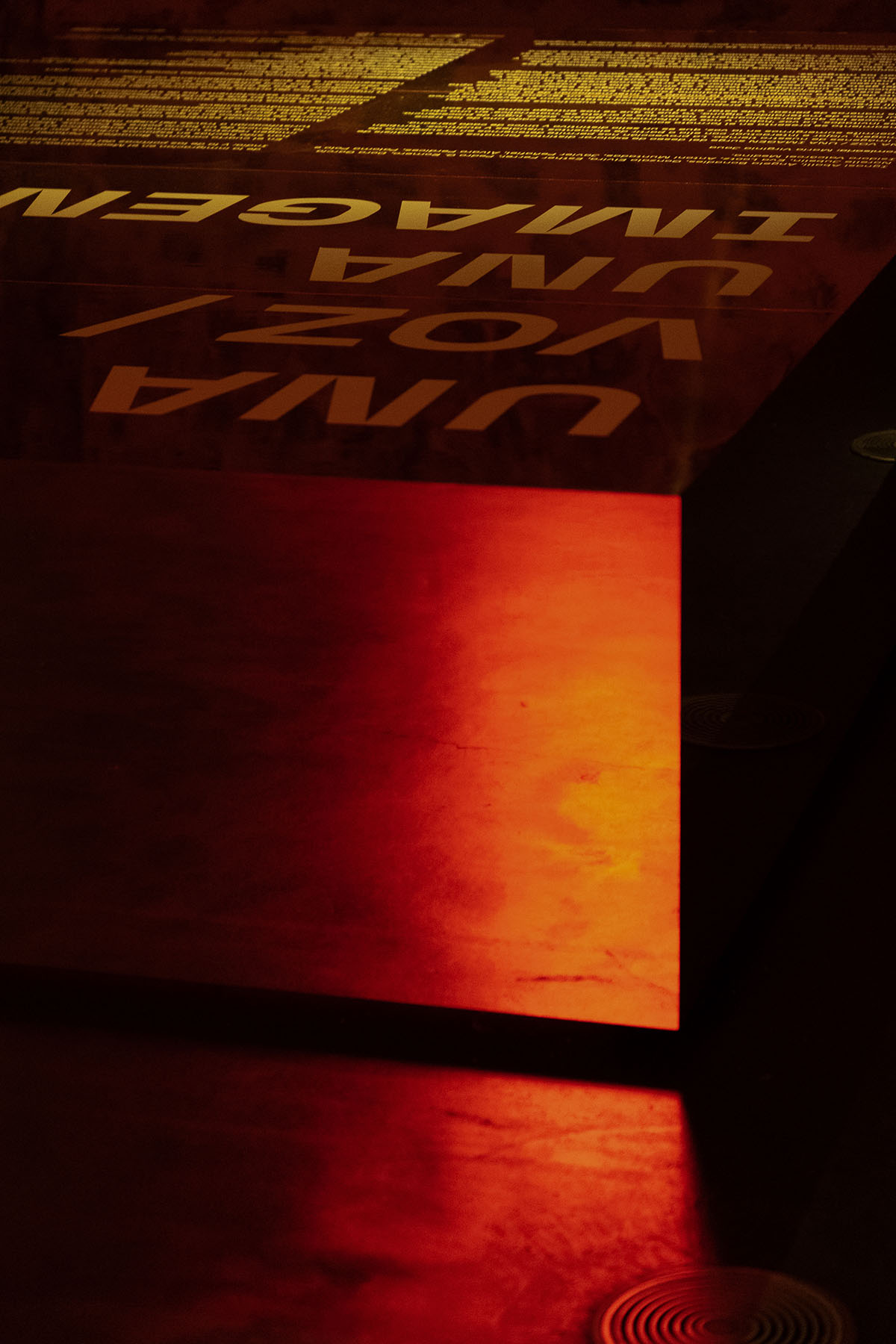 "The geometry of the entrance hall’s volumes are the result of recycling structures in disuse, the screens can be taken apart for better storage and transport, and when the exhibition ends, the seats will become part of the museum’s furniture," said Solar.

Just like the works commissioned to the artists by the curator, according to the studio, the design of the space "seeks to stimulate reflection on the part of visitors, and to give an impetus to the formation of a critical view of the images, with the ultimate aim of developing a narrative for our times." 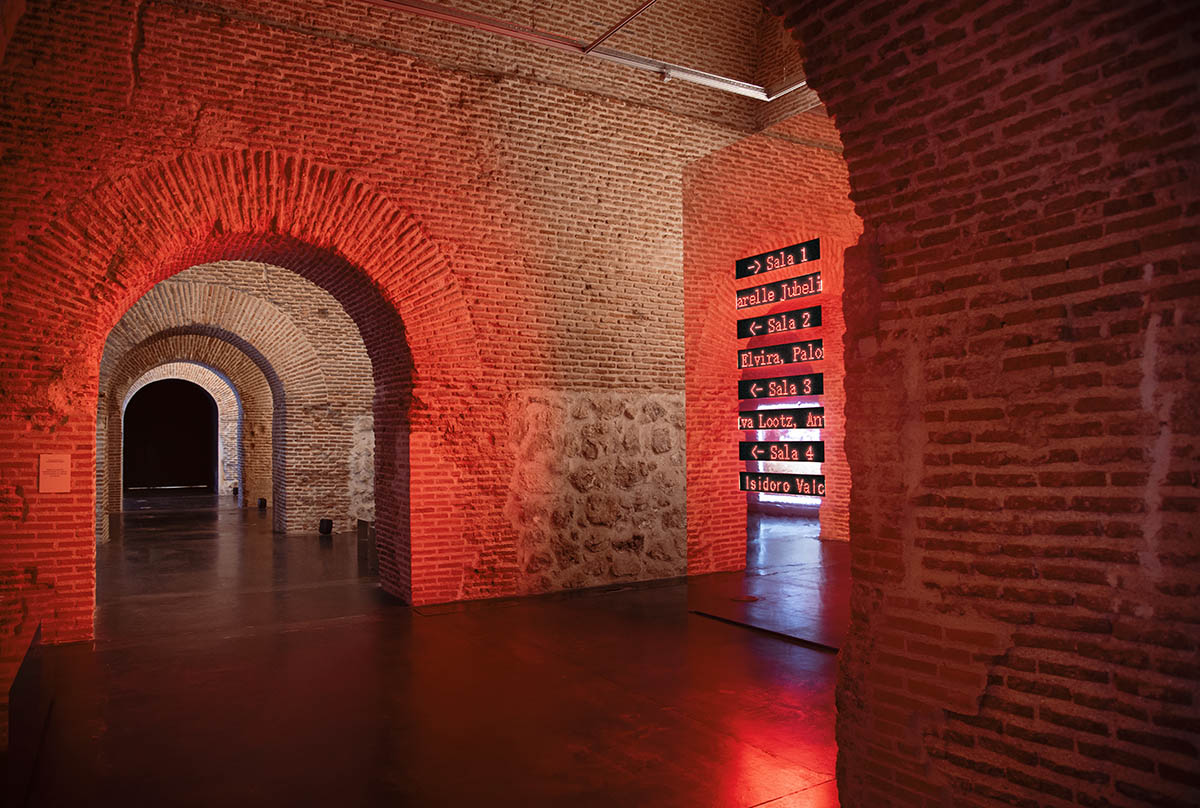 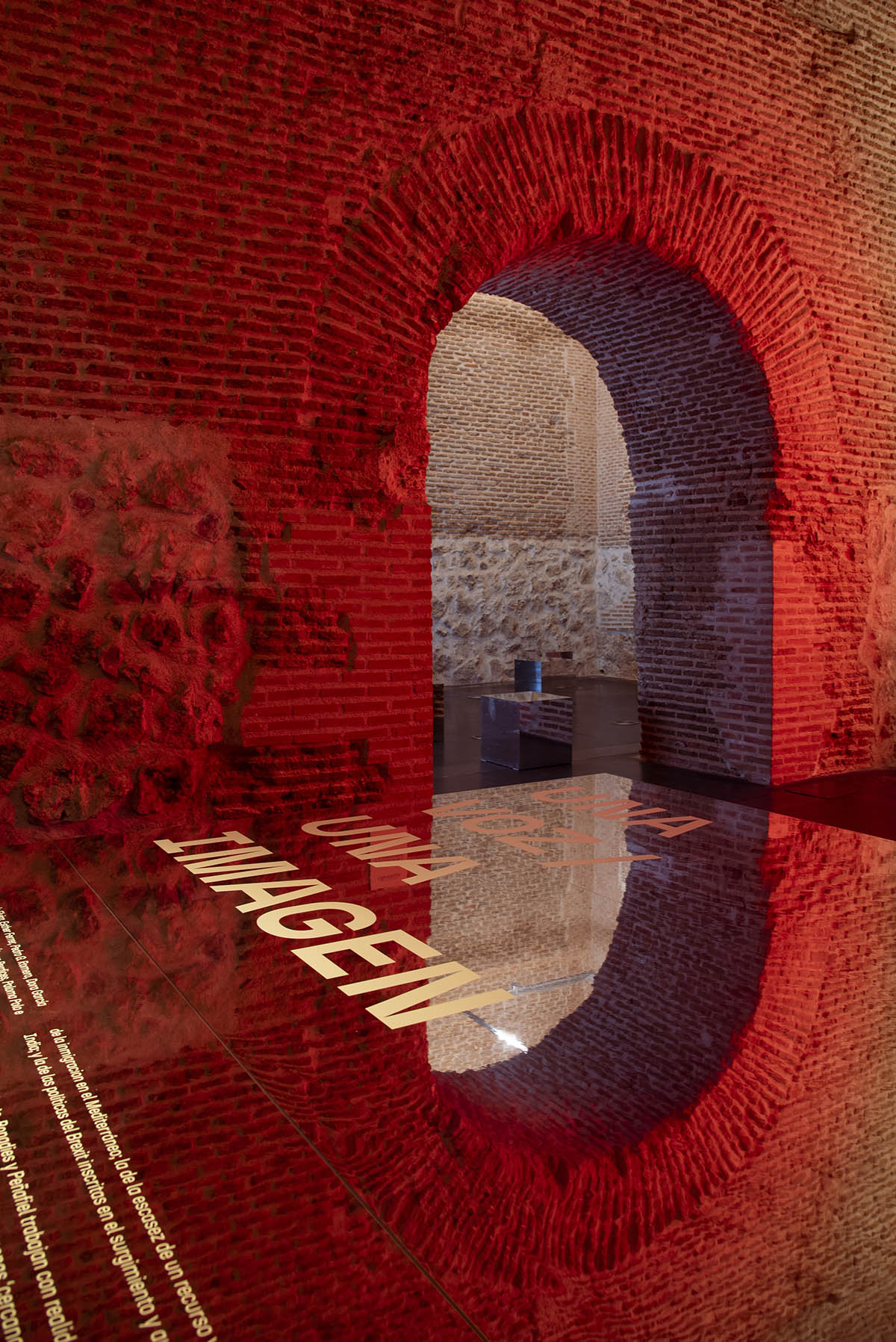 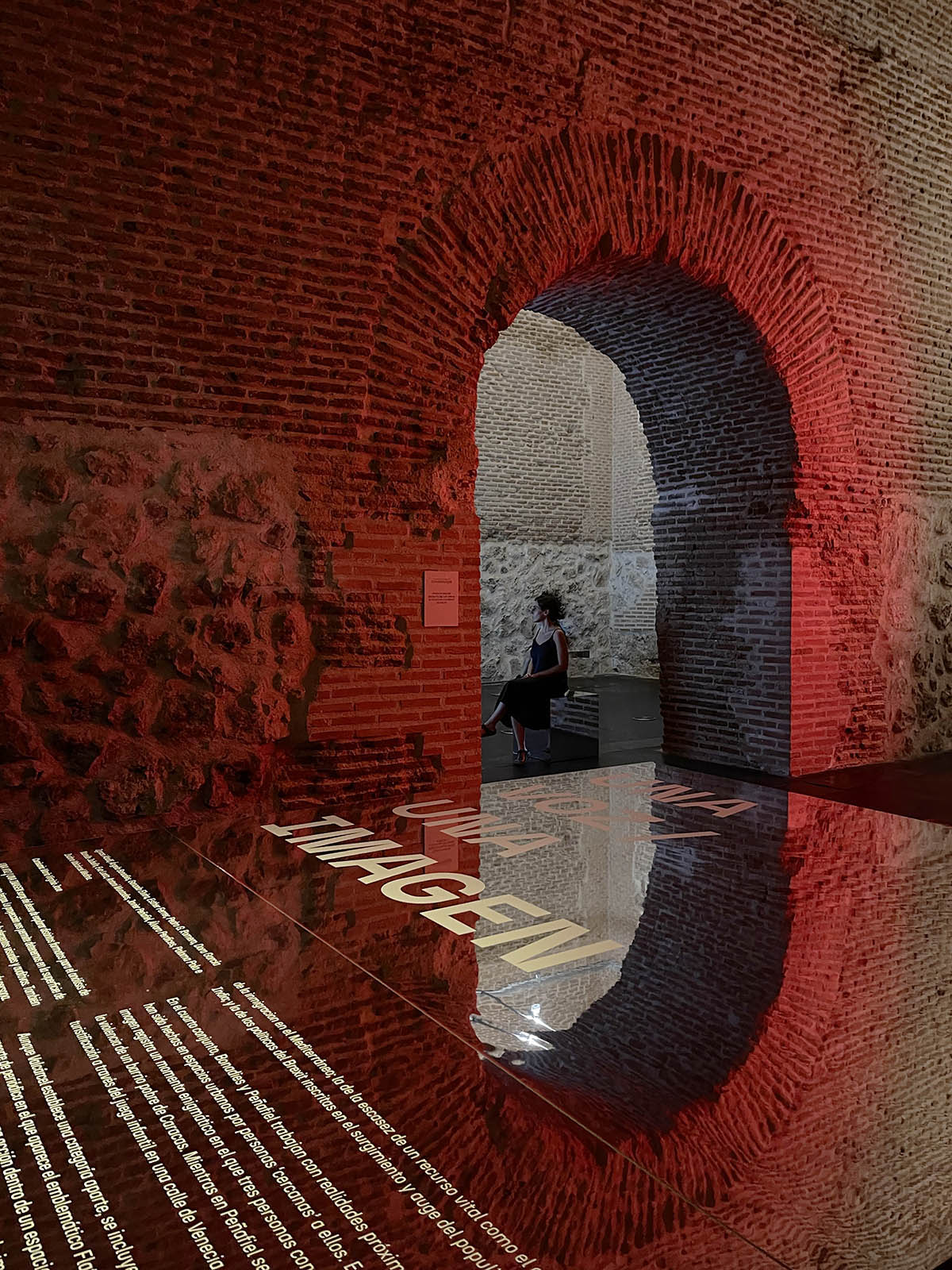 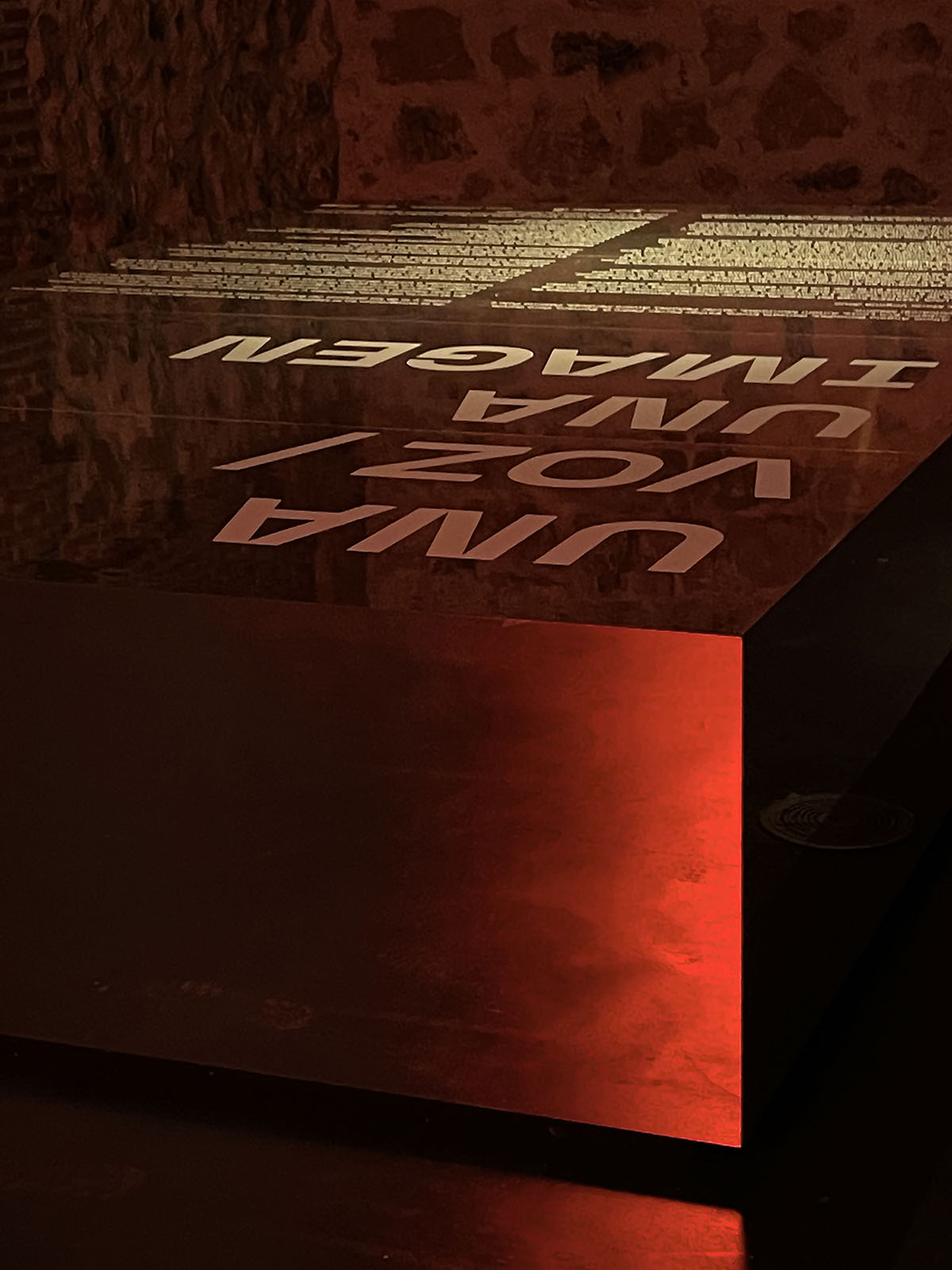 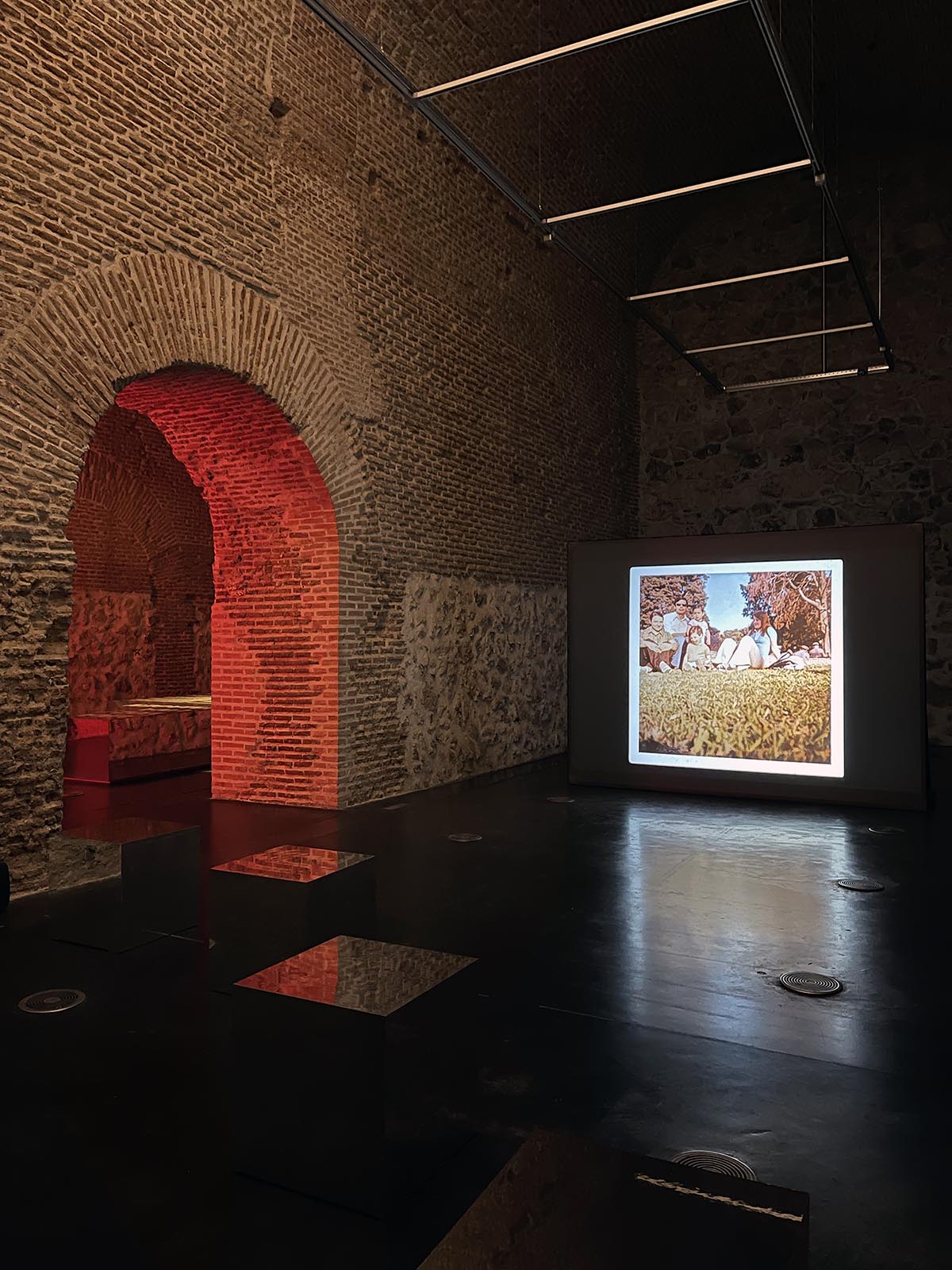 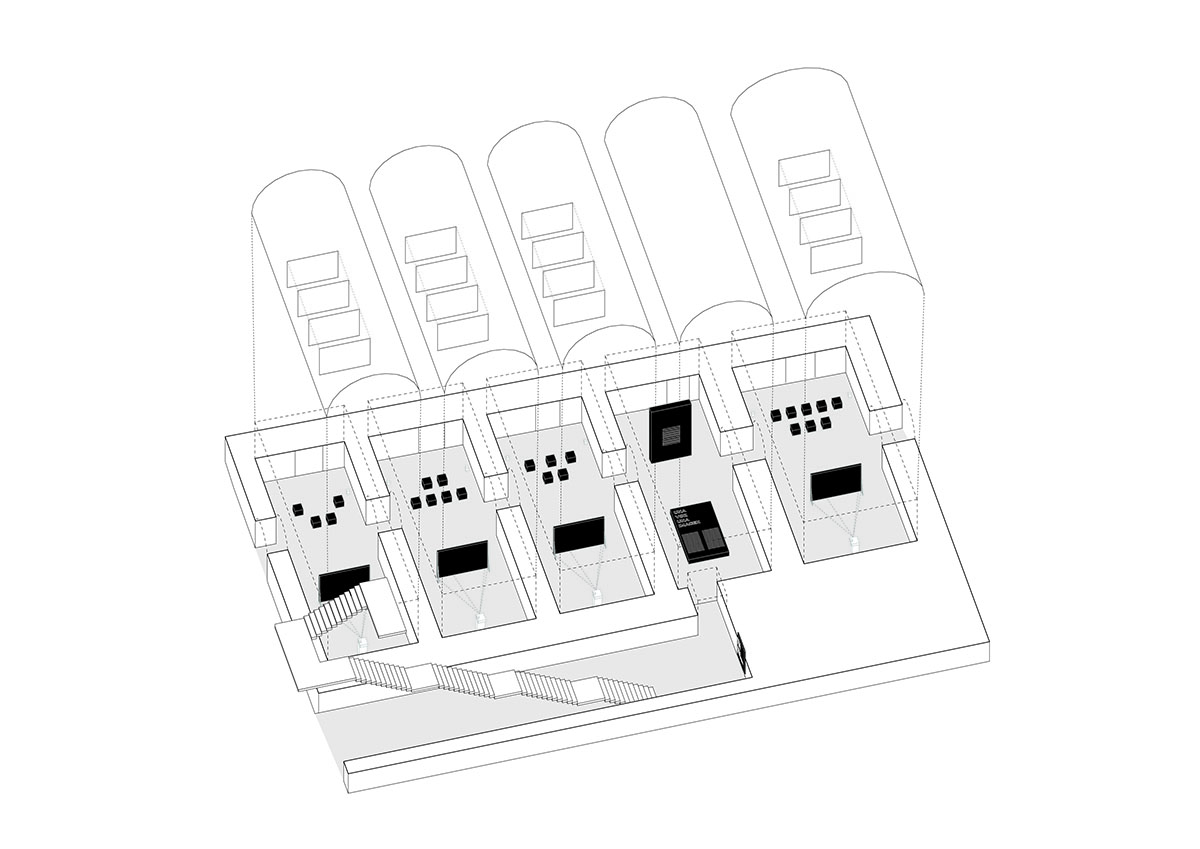 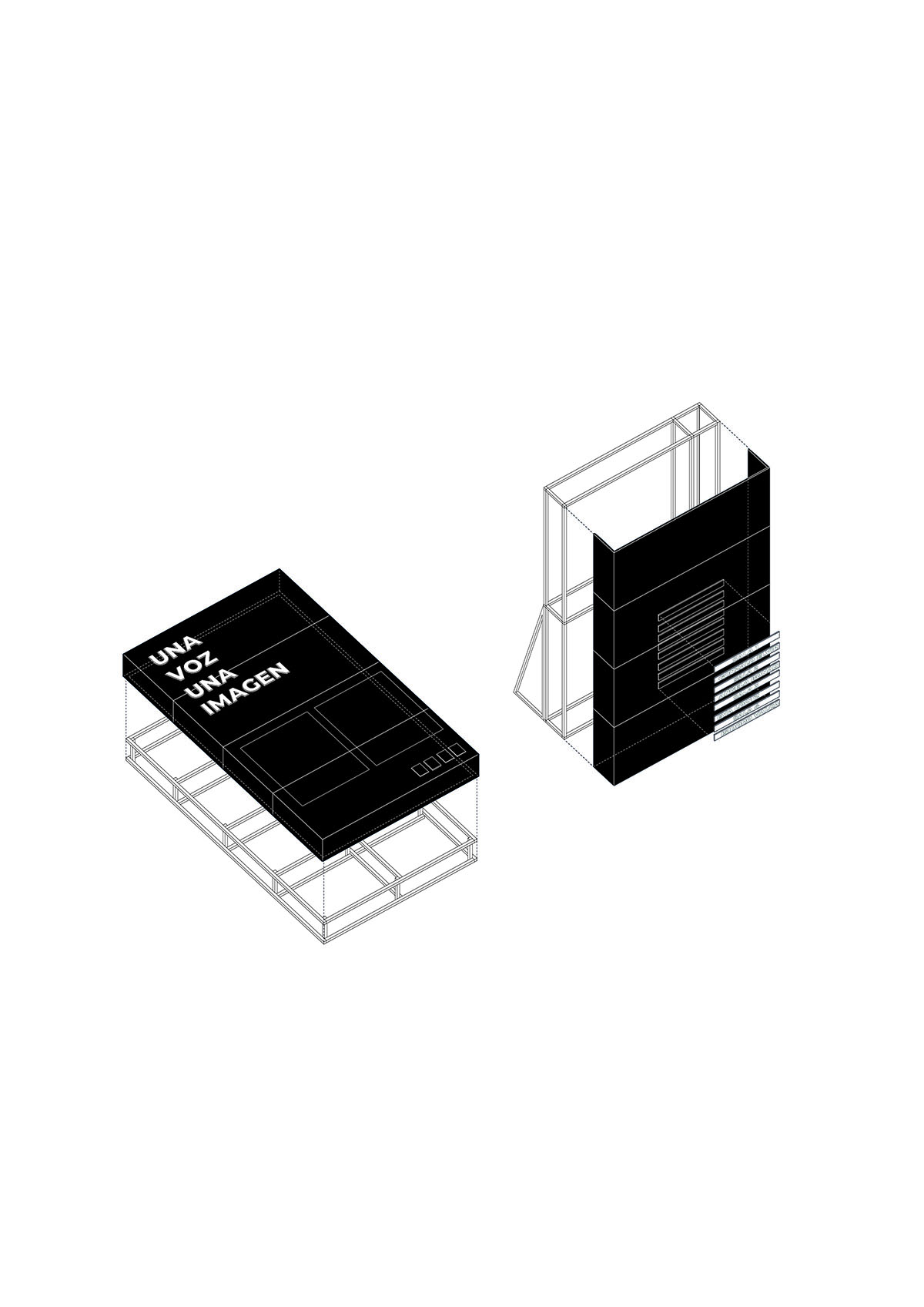 Solar and Marta Jarabo previously designed the interiors of an ice cream shop in the historic center of Madrid, Spain.