Winners Of The Taj Amity Pavilion Design Competition By Archdais 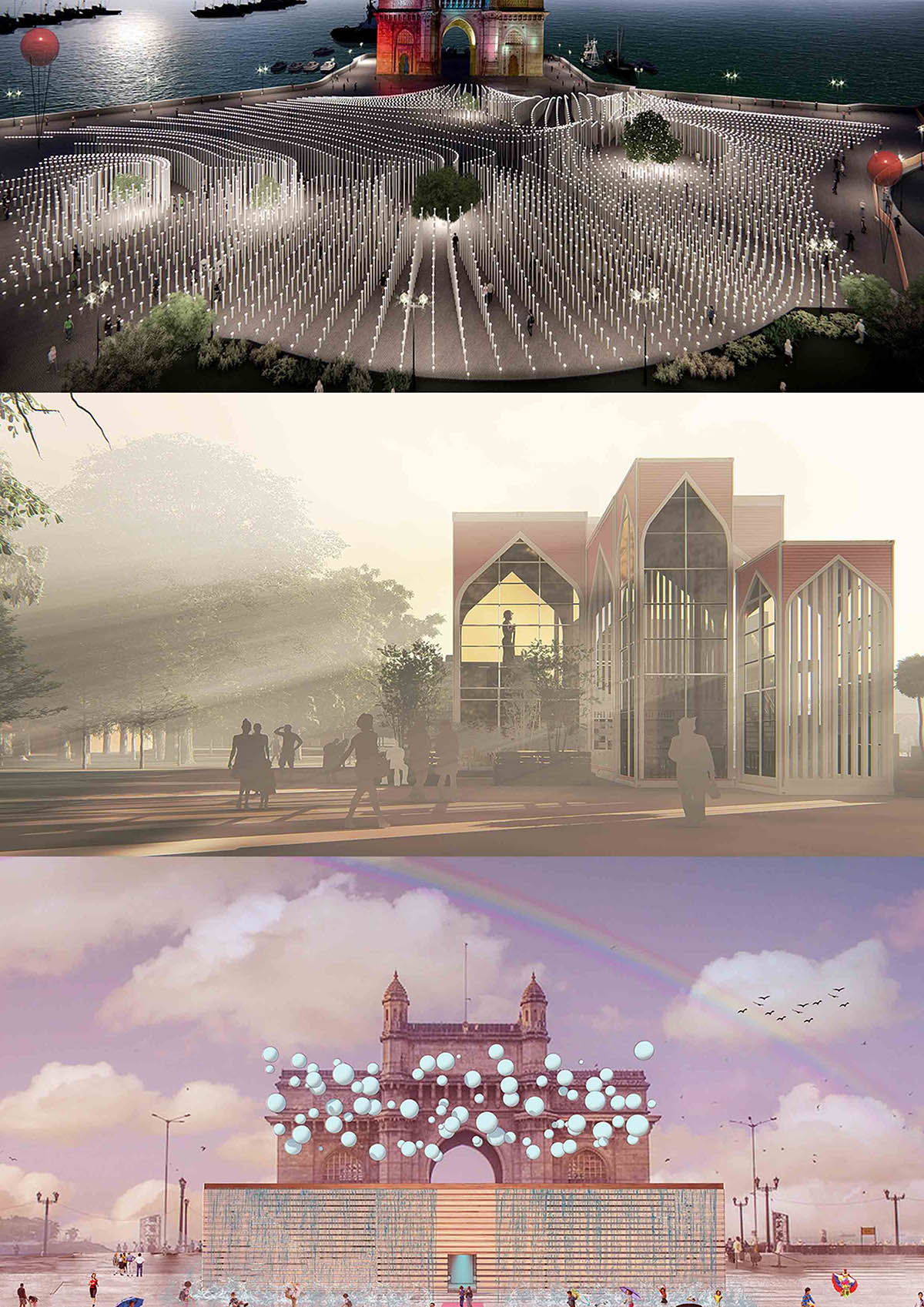 The Competition invited ideas from architects and students for a Pavilion to commemorate the challenges that Mumbai has gone through over the years. It was held by Archdais from 1st July to 31st October 2018. Around 729 registrations were seen for Archdais’ first competition. Winners were rewarded with USD 2882 (INR 200,000) and certificates.

The brief demanded a design that showcases and honours the rich values of the Indian front against forces that attacked Mumbai. The city’s heritage and history that has served as the nation’s identity and been contributing via tourism and recreational activities was also to be thrived upon.A make-shift natured and Eco-friendly design were part of the criteria too.

The Gateway of India precinct is one of the oldest and a popular tourist attraction that hosts various hotels, art galleries, historic buildings and other activities that cater to visitors from within and outside the country. The top three winning entries follow, with design descriptions by the entrants.

The winning entrants are Taikhum Shaikh, Aadil Amla, Boney Keriwala. "The attacks of 26/11 marked terror within the hearts of Indians and foreign nationals. It claimed 166 lives and more than 200 injuries. The Taj peace pavilion pays homage to these brave martyrs and victims. The form was evolved by mapping the places of the attack on site, with six major places as tribute pavilion for victims. Each of these pavilions radiates lines defining the number of deaths at a particular place. The central open space defines the magnitude of attacks", say the winners. 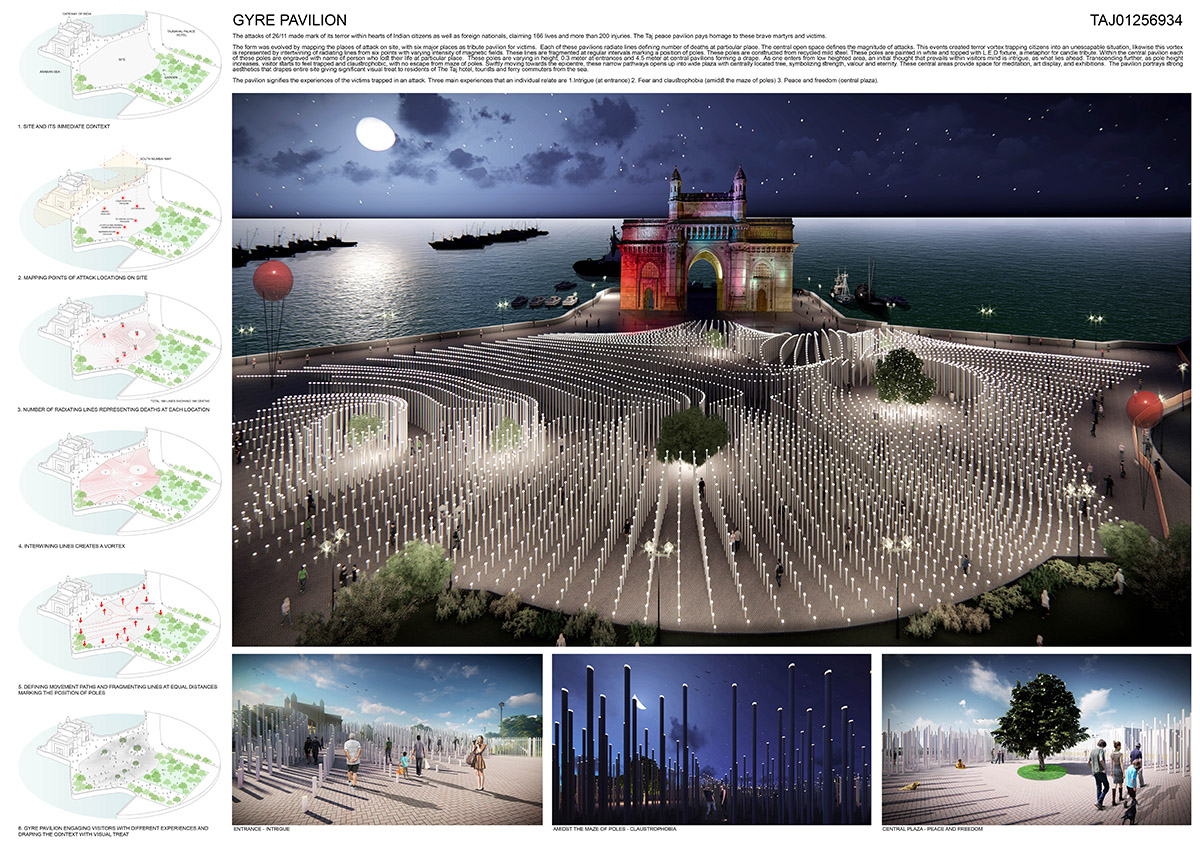 "These events created terror vortex trapping citizens into an inescapable situation, likewise, this vortex is represented by an intertwining of radiating lines from six points with varying intensity of magnetic fields. These lines are fragmented at regular intervals marking a position of poles," say the winners. "These poles are constructed from recycled mild steel. These poles are painted in white and topped with L.E.D fixture, a metaphor for candle tribute. Within the central pavilion, each of these poles is engraved with the name of the person who lost their life at a particular place," say the winners. 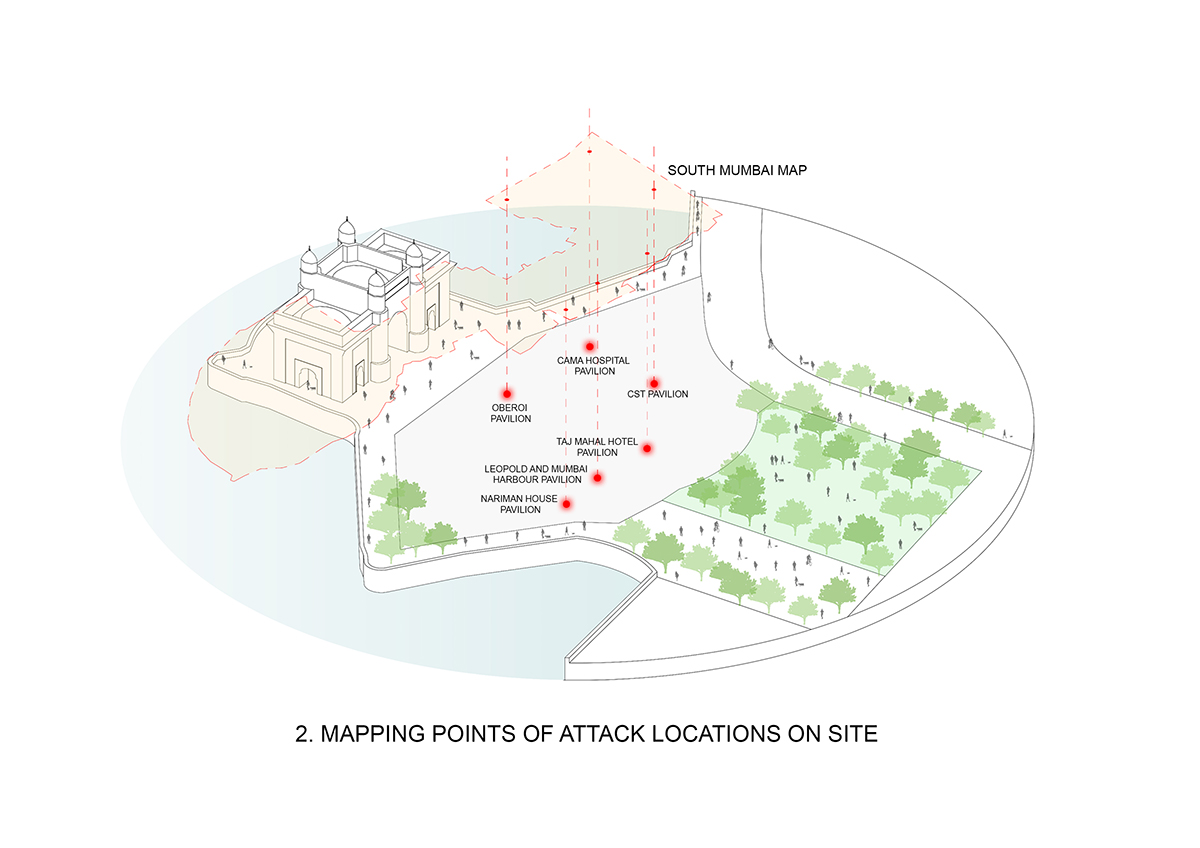 "These poles are varying in height, 0.3 meters at entrances and 4.5 meters at central pavilions forming a drape. As one enters from the area of low height, an initial thought that prevails within the visitor’s mind is intrigue, as what lies ahead," say the winners. "Transcending further, as pole height increases, the visitor starts to feel trapped and claustrophobic, with no escape from the maze of poles. Swiftly moving towards the epicentre, these narrow pathways open up into wide plaza with a centrally located tree, symbolizing strength, valor and eternity. These central areas provide space for meditation, art display, and exhibitions," say the winners. "The pavilion signifies the experiences of the victims trapped in an attack. Three main experiences that an individual relate are as follows: 1. Intrigue (at entrance) 2. Fear and claustrophobia (amidst the maze of poles) 3. Peace and freedom (central plaza) The pavilion portrays strong aesthetics that drapes the entire site giving a significant visual treat to residents of The Taj hotel, tourists and ferry commuters from the sea," say the winners. 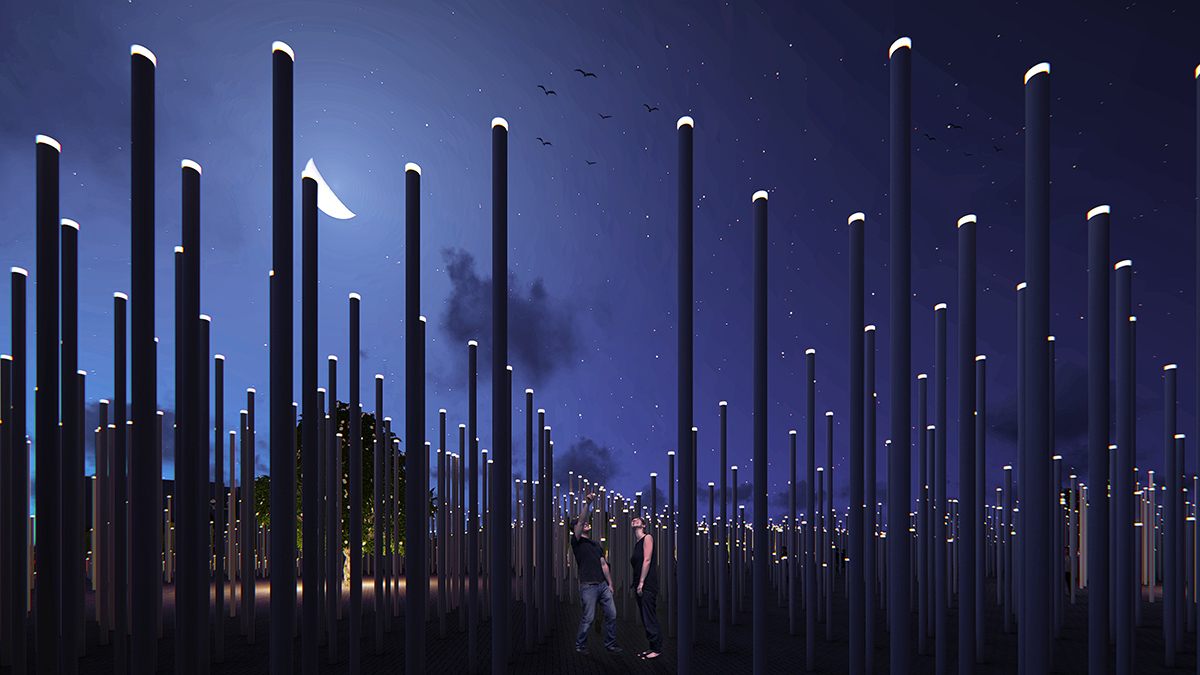 The runners include Shantanu Paul, Lakshya Gupta. "A Spatial Encounter Mumbai the capital city of Maharashtra and also the financial capital of India has a distinctive ensemble of many Victorian and Art Deco buildings. It is also home to three UNESCO World Heritage sites," say the runners. "The city has been tested many-a-times over the past years by terrorists with a motive of breaking down the spirit of the place and its people. The idea of this pavilion design is to ideate a public space that doesn’t pose as an object of terror but instead generate interaction and unity among people of all backgrounds to come together as one," say the runners.

"Mumbai lies in the Konkan coast on the west coast of India and has a deep natural harbour. Taking advantage of its geographical location, the primary idea for the material as a resource has been ideated. The use of shipping containers allows a lightweight yet flexible material which can be found in abundance in and around the city, cutting down on cost of material resource and its transportation. The material can be fabricated ex-situ and installed on site as they are of standard available sizes," say the runners. 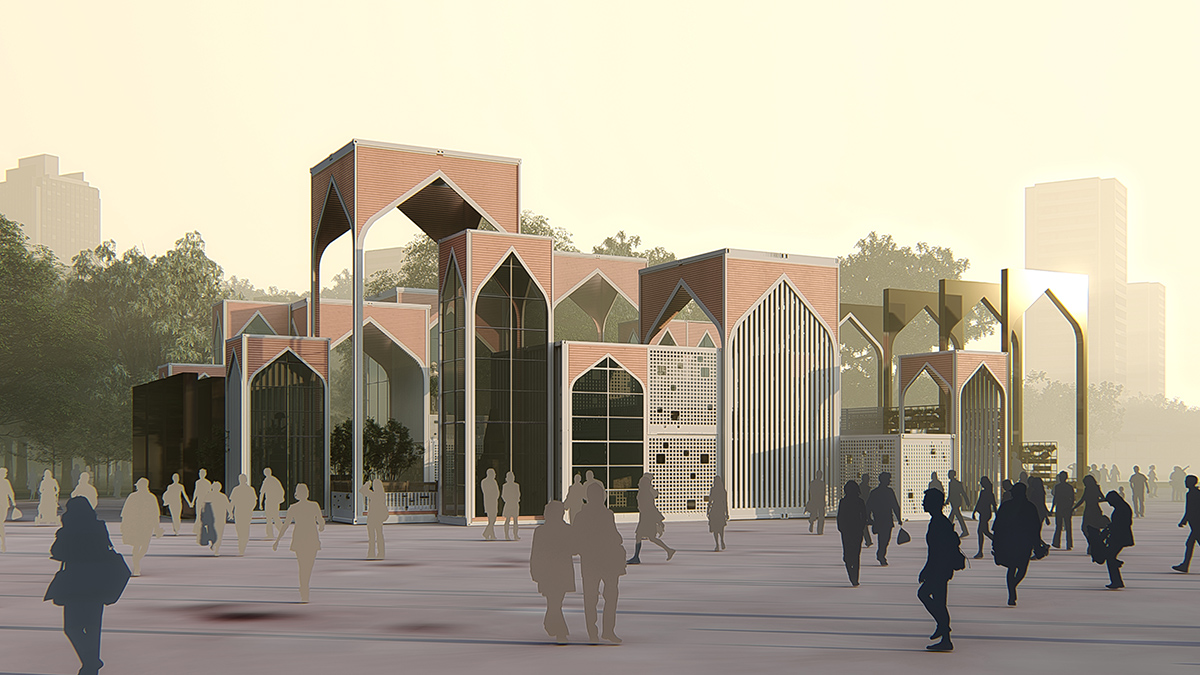 "The incorporation of Indo-saracenic style arches which is contextual to site, jalis or perforated walls and louvers at various spaces makes it standout as a monumental structure amidst others surrounding it, while being true to its purpose and functions. While being contextual, the fluorescent pink colour adds a pop-cum-contemporary emotion and adds vibrance to the overall space," say the runners. "The Pavilion has been conceptualized to generate interaction and encounter a conflict with one’s own image while providing abundant shaded public spaces. The High reflecting steel walls depict the martyrs protecting the space in form of solid walls even after they are gone. The reflecting walls also depict an encounter with one’s own image as he stands in front of it," say the runners. 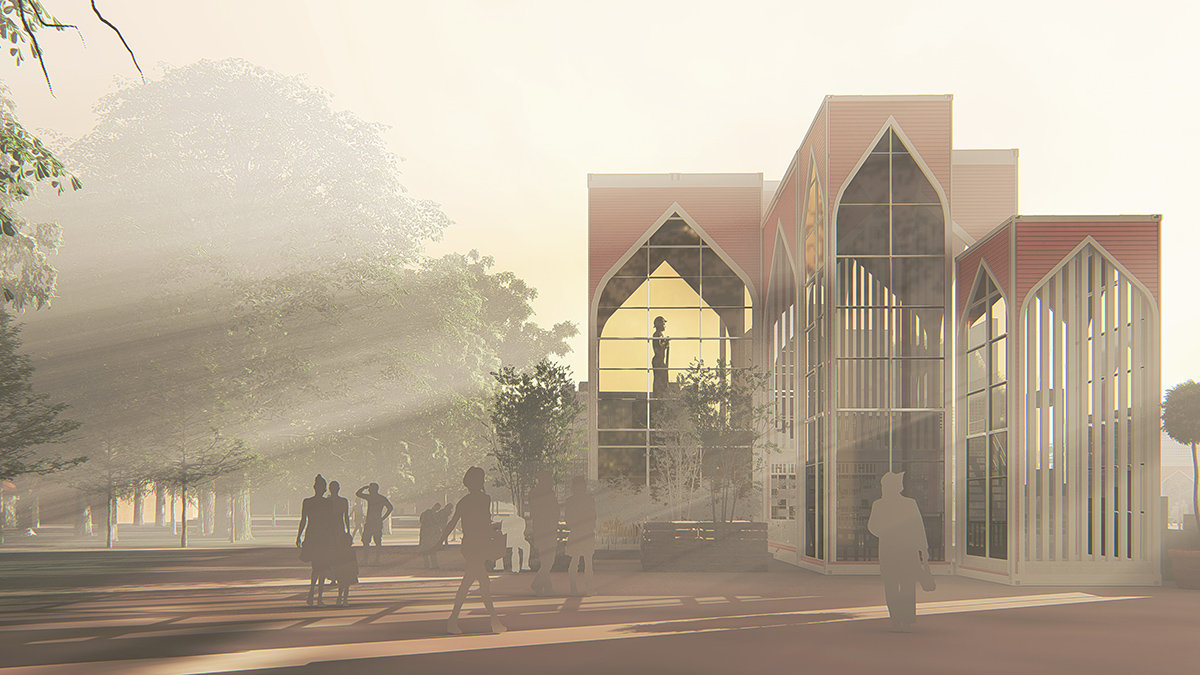 "The reflection of the city’s skyline on the walls showcases and highlights Mumbai’s rich heritage and architecture. Small tombstone style rustic walls dedicated to the civilians who lost their lives stand adjacent to the main reflective walls. This depicts how the martyrs stood next to the civilians protecting them in times of hardships and horror," say the runners. "The result is a public space that generates interaction and unifies people of all background, where they can come together as one. Also, the use of modular shipping containers (thousands of which are abandoned every year) incorporated with Indo-saracenic arches makes the design more humble and pragmatic while tending to a monumental character holistically," say the runners. 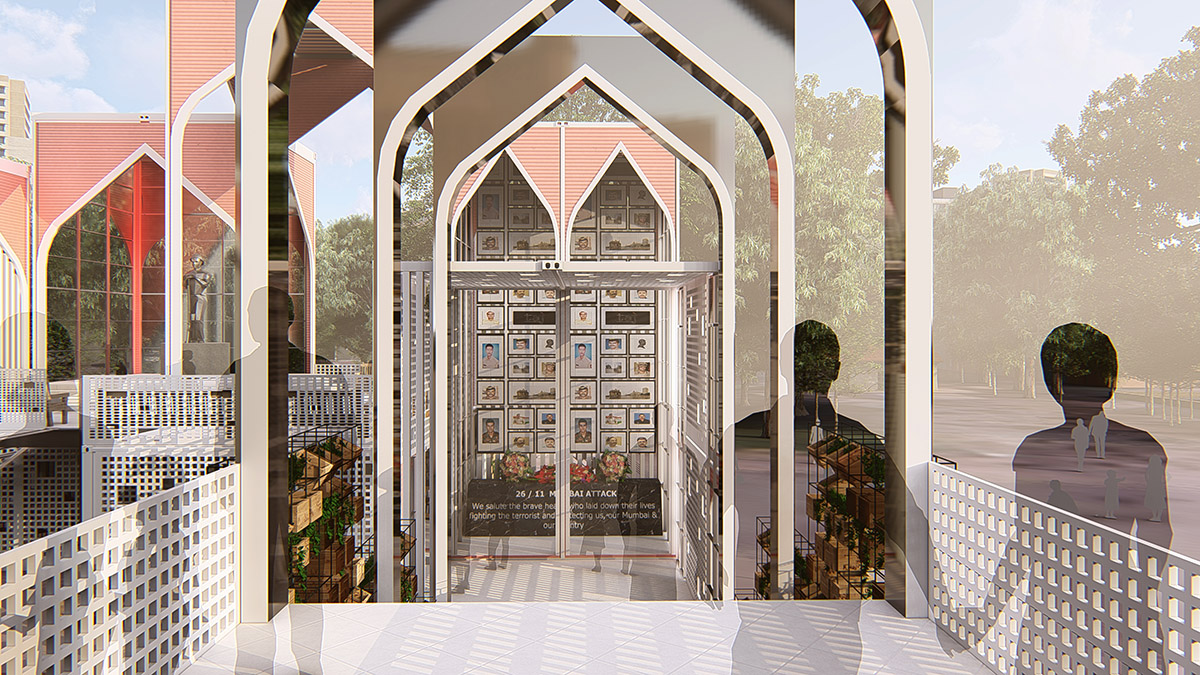 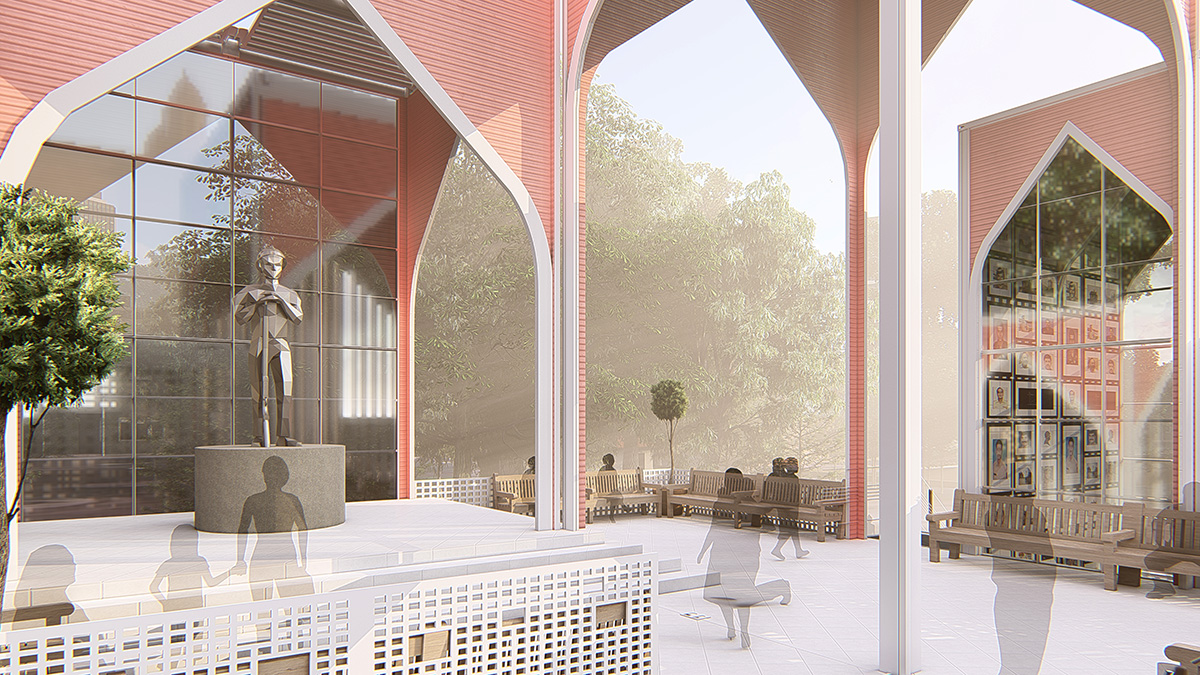 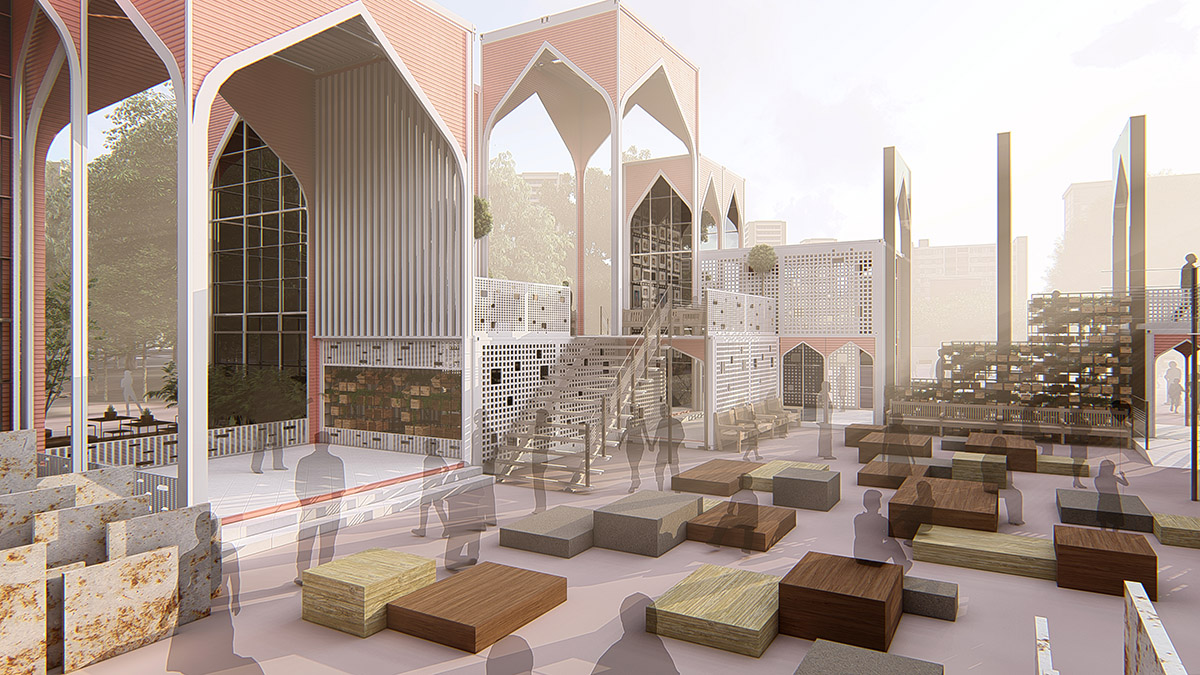 The team includes Sparsh jha, Gurucharan Chhabra, Rahul Kumar. "The pavilion is in remembrance of the ones we lost on that black day and to pay tribute to the martyrs of 26/11 attack the placement of pavilion creates axis towards four major landmarks of the site. Here ‘Water colour’ recounts the emotions, feelings and state of mind of victims," say the second runners. "The idea is to reflect the loss of life by change in colour of water and building façade with time, as victims put their steps ahead depicting the end of sorrow and despair. The central space portrays the tree of life where its branches are reaching to heaven in the form of ETFE balloons and roofs connecting to earth so are one’s life. This space henceforth shares the memory and love of those ones we lost," say the second runners. "The main purpose of the project is to serve not only a tribute to the innocent lost souls and also majorly provide an essence of security and safety to the people by overcoming the terror with an architectural expression symbolizing power, peace and harmony," say the second runners. The competition has resulted with entries that manifest the passion that the nation carries for some of Mumbai's precincts and the challenges they have faced. All the top 50 submissions are up for viewing on our Archdais’ website.

All images courtesy of Archdais.