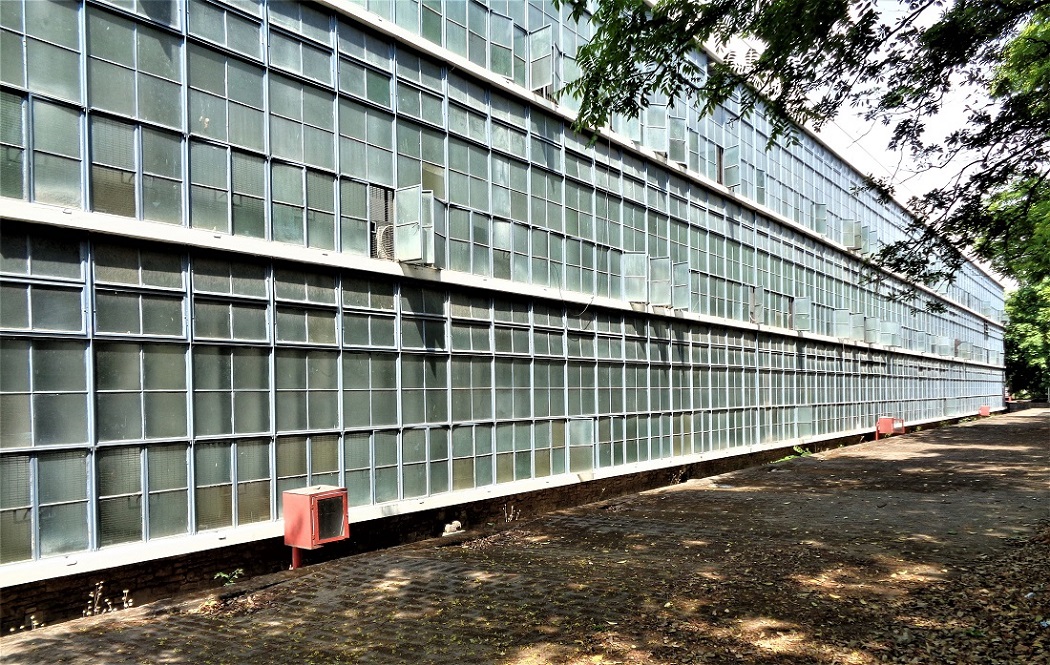 Government Press Building at Chandigarh, designed by Edwin Maxwell Fry and built in 1953, is the first glass-façade building in India. This fact may not be known to many architects and architectural historians in India and abroad.

Edwin Maxwell Fry, an English architect, was one of the four-member team of foreign architects headed by Le Corbusier who designed the capital city of Chandigarh. The other members of the team were Corbusier’s cousin Pierre Jeanneret, and Maxwell Fry’s wife Jane Drew. Maxwell Fry was largely responsible for the designing of government staff houses in Sectors 22 and 23 which were developed in the early 1950s in Chandigarh. 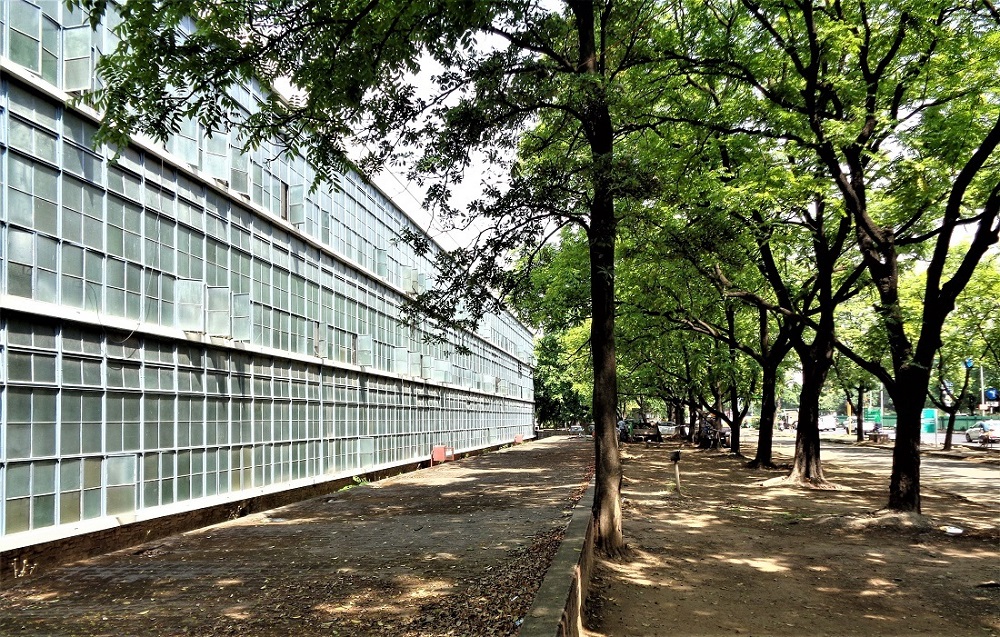 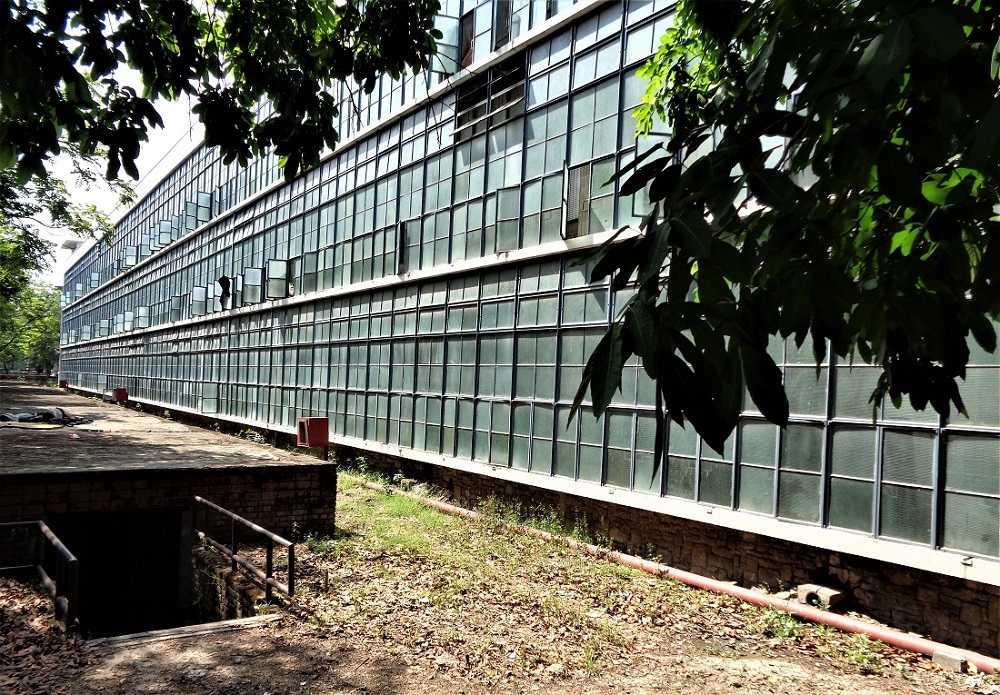 Government Press Building was one of the first non-residential buildings designed by Maxwell Fry in Chandigarh. It is prominently located in Sector 18 adjacent to the City Centre, Sector 17. The building occupies a 2.48-acre corner plot abutting Madhya Marg on its north-east, and sector-dividing V3 road running between Sectors 17 and 18 on its north-west.

The importance given to the printing press building can be gauged from the fact that instead of providing the facility in a factory-like structure in the industrial area on the outskirts of the city, it has been provided space in the heart of the city. It was the city’s resolve in the early 1950s that the building for printing and stationery for the government offices should be iconic in nature, and a symbol of modernity in sync with the character of the city. 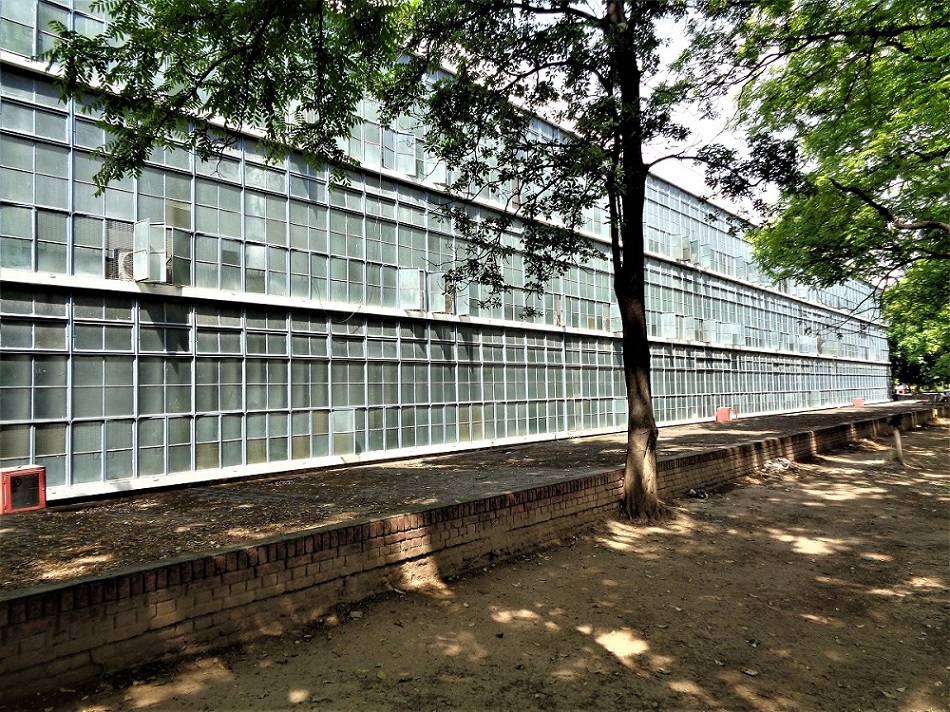 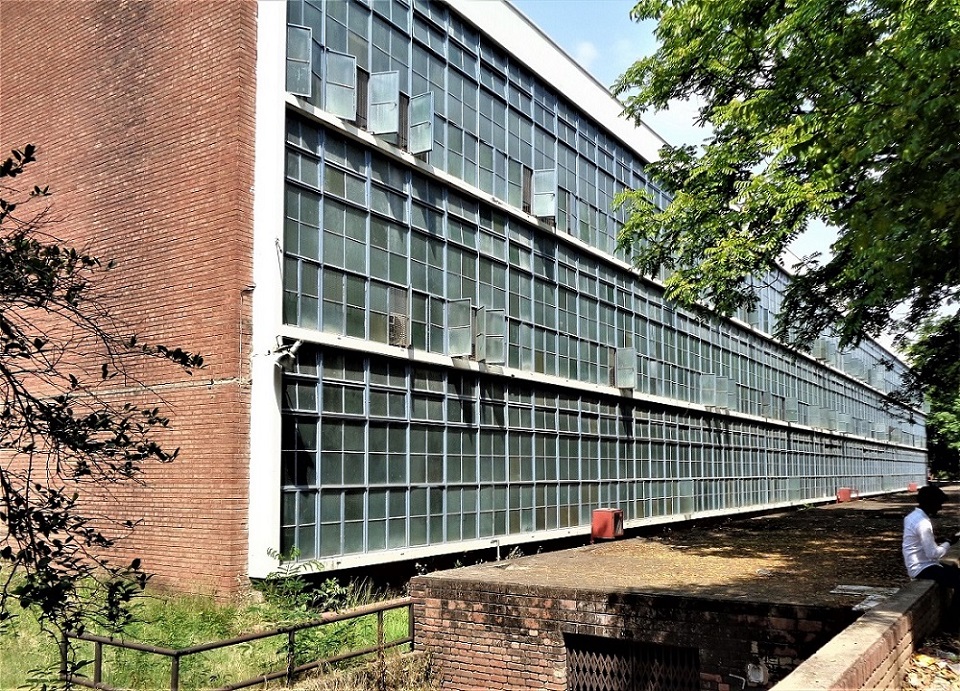 Maxwell Fry was thus assigned the job of designing this important building. Fry, whose thinking was known to be ahead of its time, did full justice to this building. He designed it using futuristic architectural vocabulary such as fully glass-façade, and adjustable aluminium louvers, together with materials like exposed brickwork and stone masonry which were adopted by Pierre Jeanneret in most of the government buildings in Chandigarh.

In a recent visit to this building, the author keenly observed it’s planning, designing, and detailing, and felt that indeed the building concepts were far ahead of its time. In the present time of commercialization, one cannot think of conceptualizing, designing, and constructing such a futuristic building. 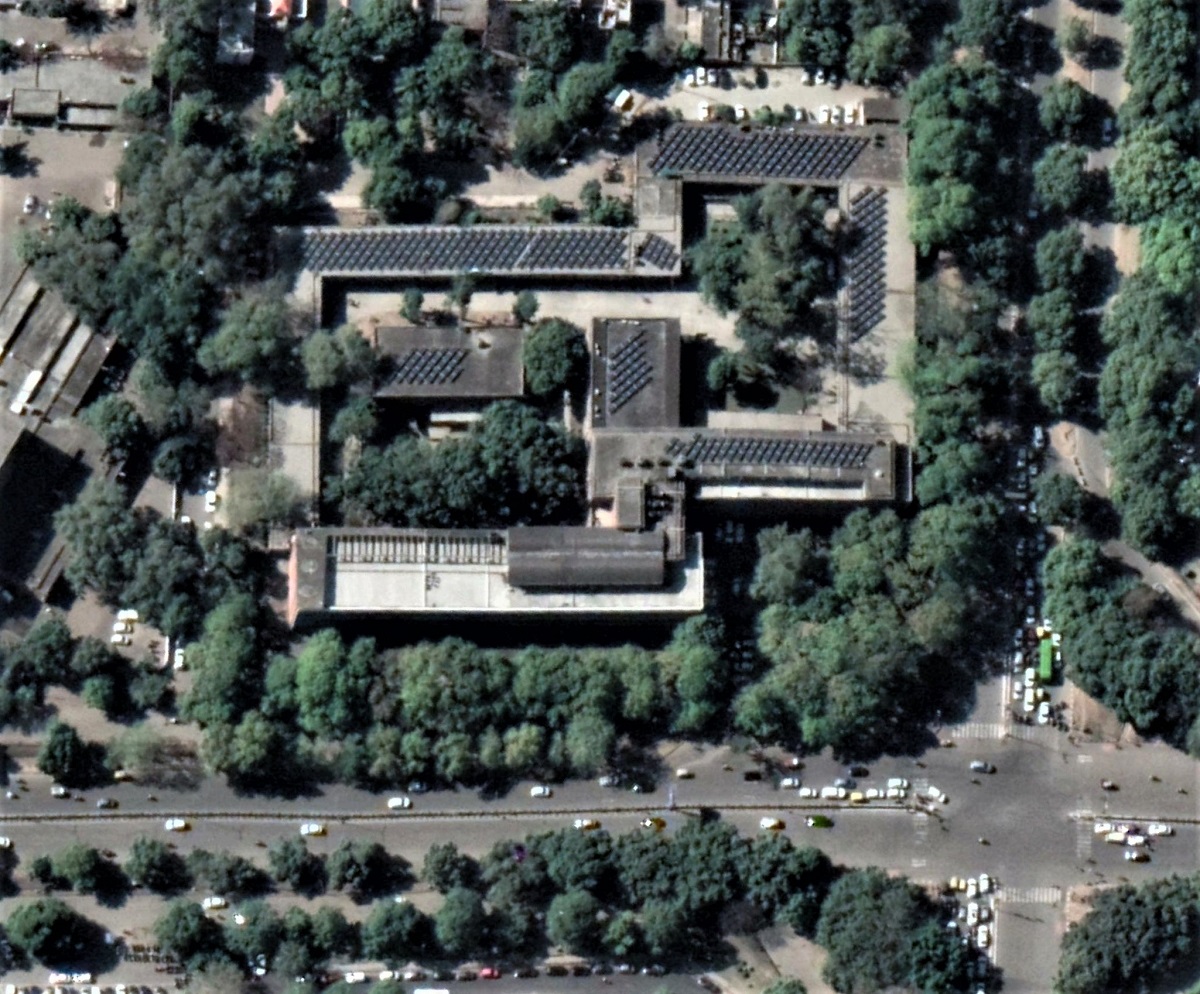 The building is designed around two interlocking square/rectangular courtyards. All the usable areas accommodated in the building draw access from singly-loaded, wide corridors which run around the courtyards. These corridors thus afford sufficient natural light, ventilation, and outside views. The south/south-west facing corridors are provided with horizontal, adjustable aluminium louvers to cut off the unwanted sun in the afternoons. The design, development, and manufacturing of this highly innovative climatic device were quite unusual and unheard of in India at that time. 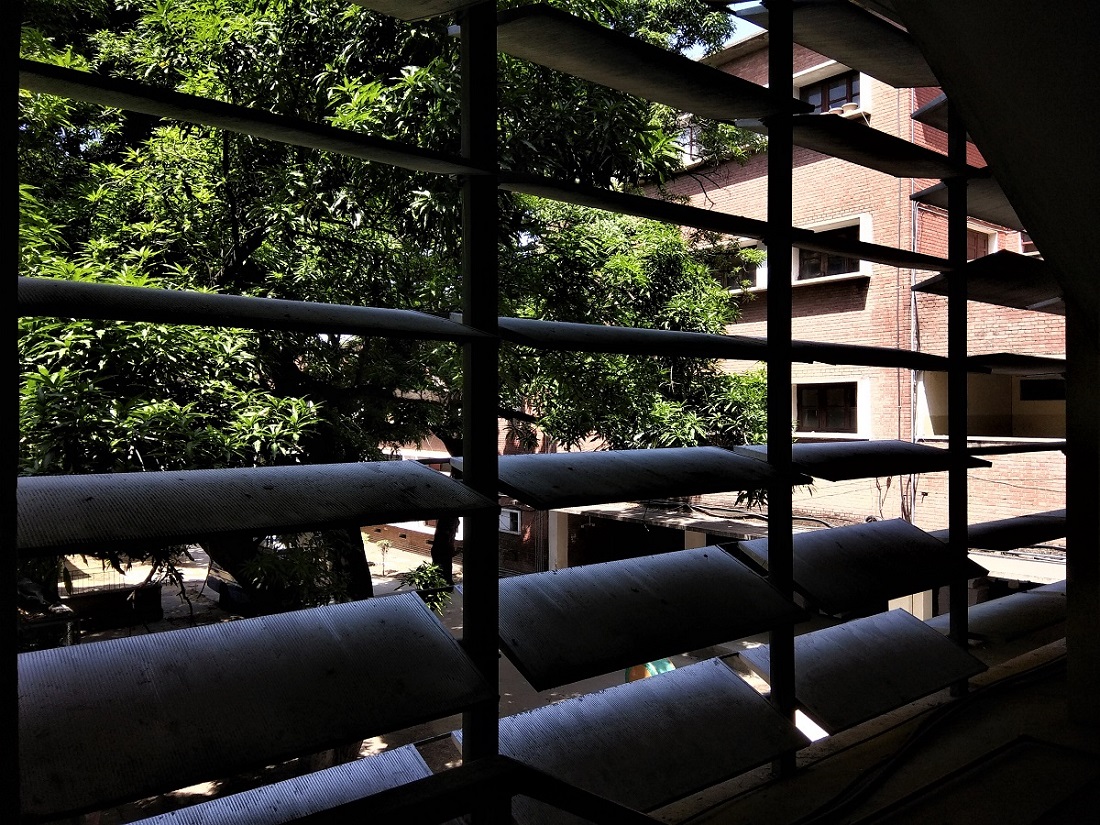 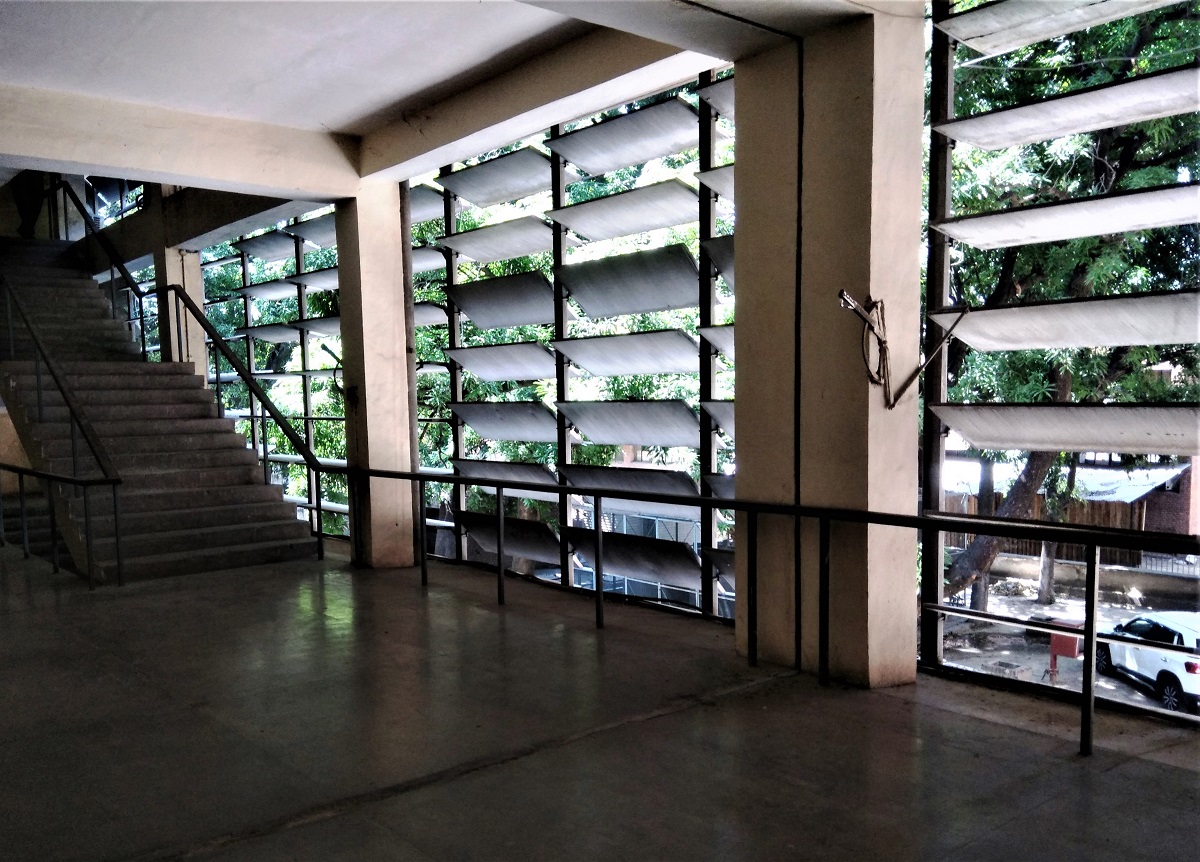 The sun-control concrete louvers invented by Le Corbusier were fixed in nature or non-operable. The only exception prior to this building was Antonin Raymond-designed Golconde dormitory in Pondicherry (Puducherry) which is considered the first modernist building in India. Built during 1937-45, the dormitory building incorporates operable louvers which run horizontally and cover the entire southern façade. Some historians are of the opinion that Maxwell Fry might have drawn inspiration from the Golconde dormitory. 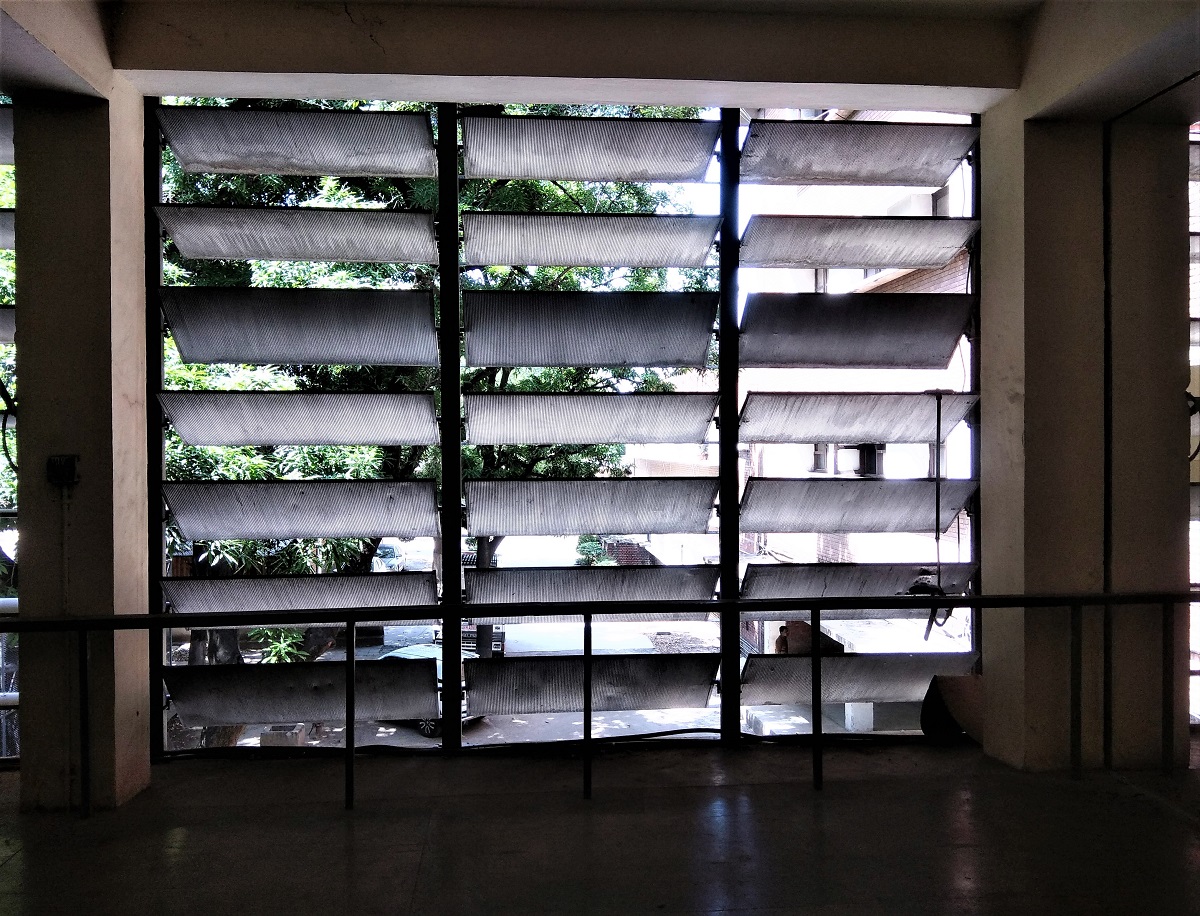 The north-eastern façade of the building which faces the Madhya Marg is characterized by floor-to-ceiling glazing, arranged in three horizontal bands set between the floor slabs. This fully-glazed façade affords an abundance of shadowless north light in the interiors which accommodate the main printing and other working areas on this side. The north-east orientation also helps in reducing the solar gain in the building. 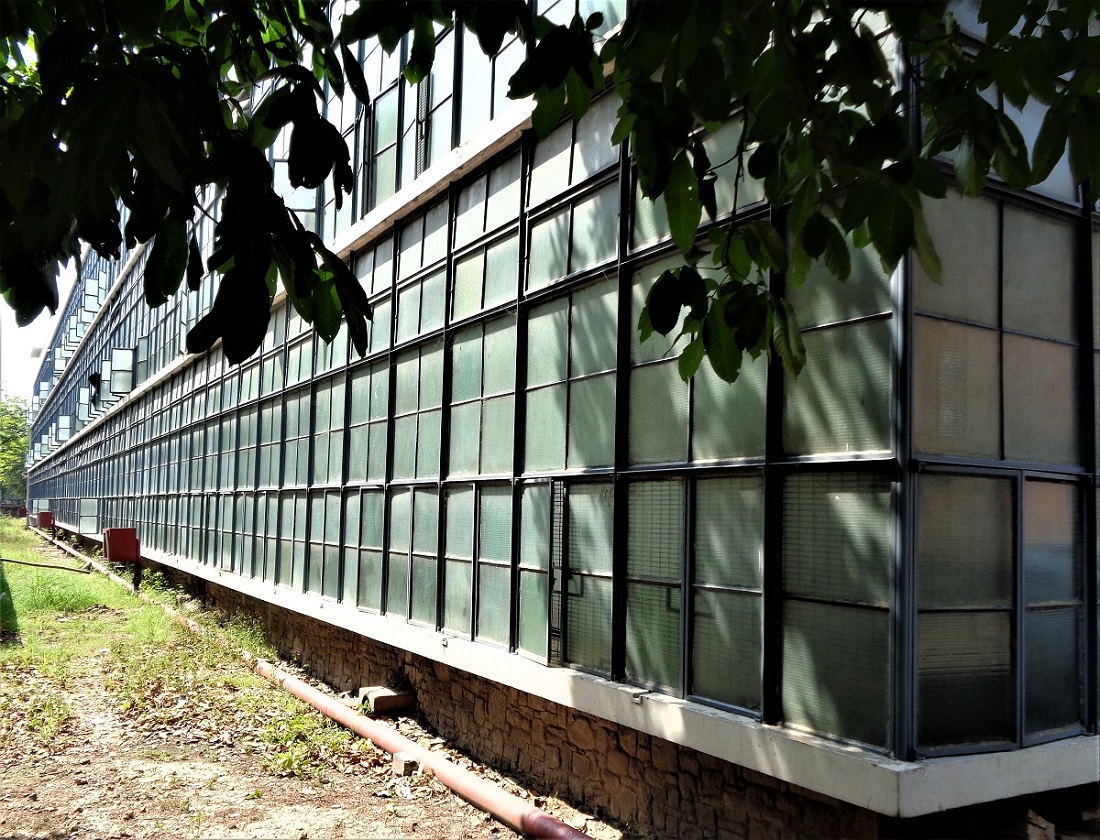 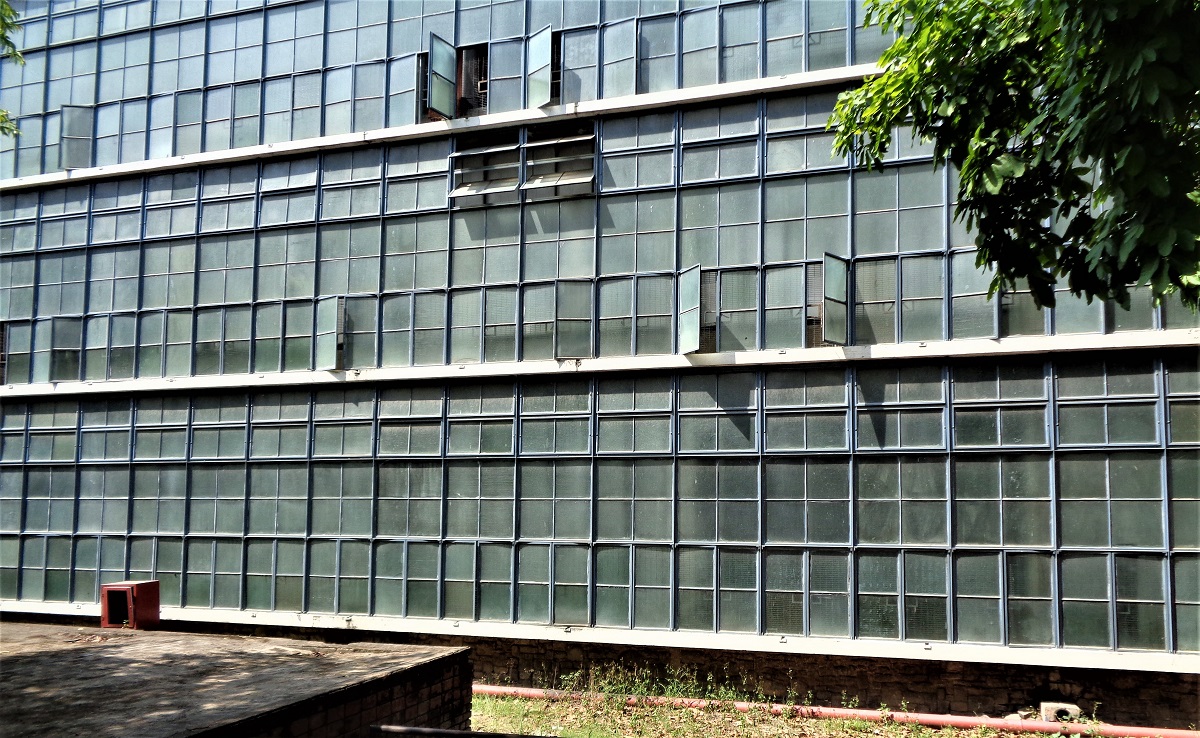 Towards the inner side of this large glazing, Fry has provided vertical operable louvers. These louvers can be easily rotated and adjusted to control the daylight as per the requirements of individual rooms abutting the glazing. These louvers are similar to the ones used on the southern side as far as operating systems are concerned. The only difference between the two is that those on the southern side are horizontally laid, while those on the north-east side are vertically laid. 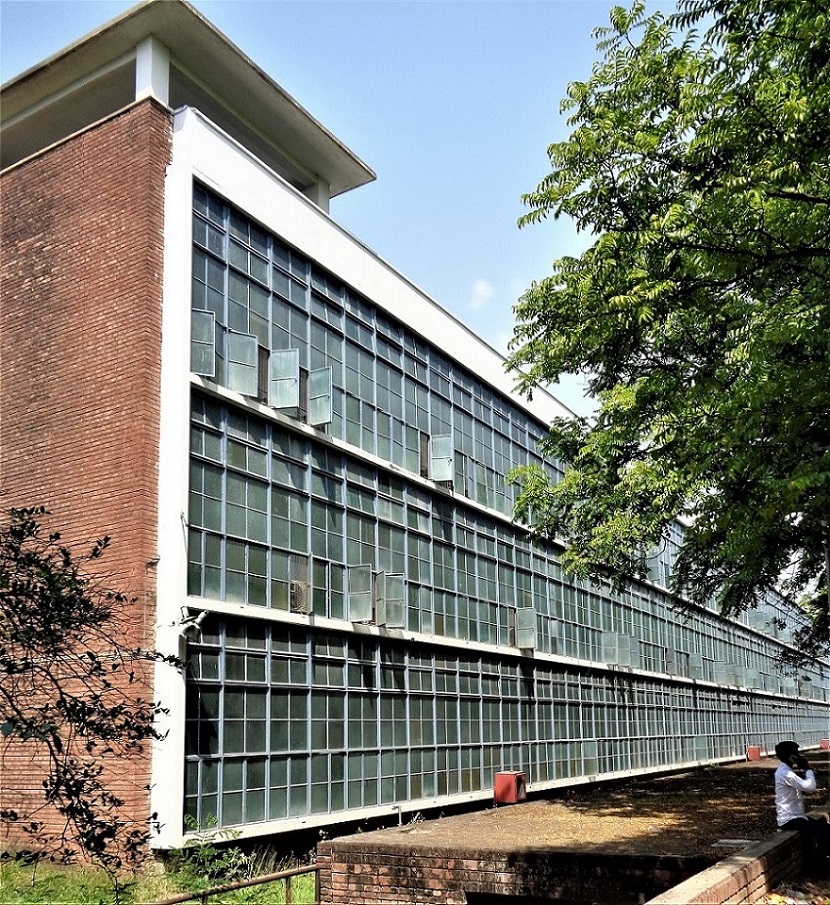 With the fully glazed façade facing the important city road – Madhya Marg, Maxwell Fry demonstrated his ingenuity not only in controlling the climate through innovative techniques but also in imparting the building a visual outlook which was far ahead of its time.

Apart from the glass-façade, the other prominent visual elements of the building are dressed stone and exposed brick surfaces. Stone and brick being the most economical materials have been extensively used in the city’s other buildings, and have become a trademark of Chandigarh’s architecture. 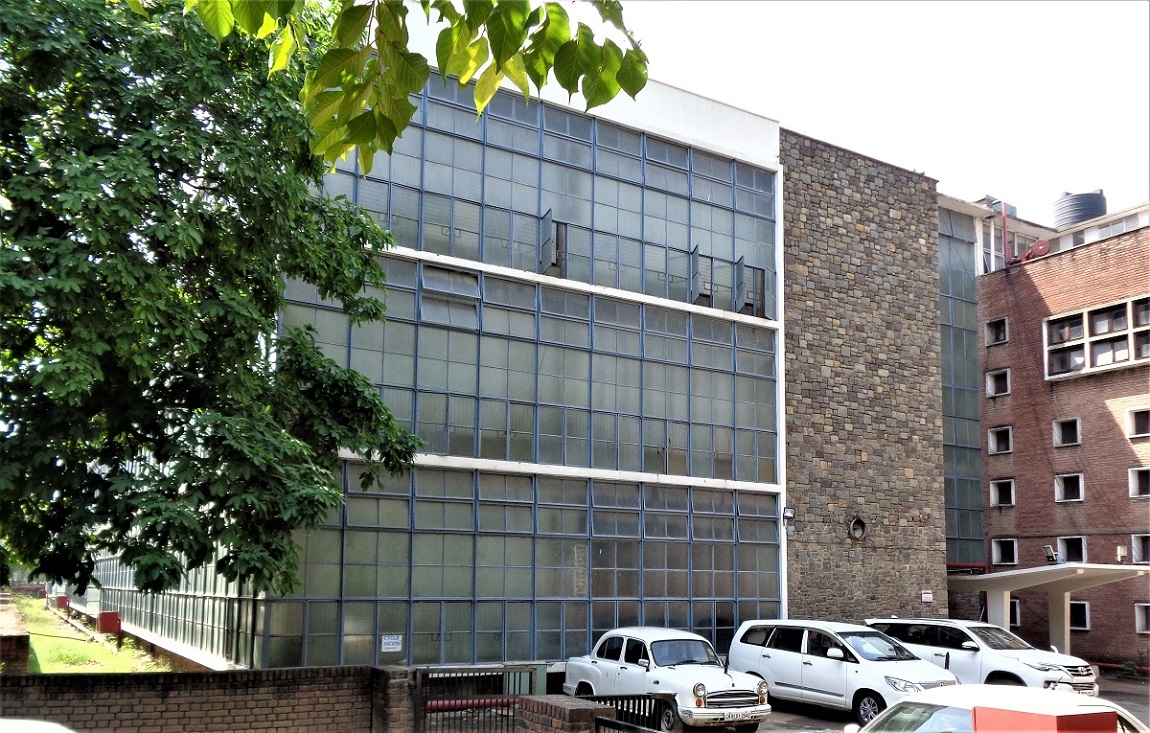 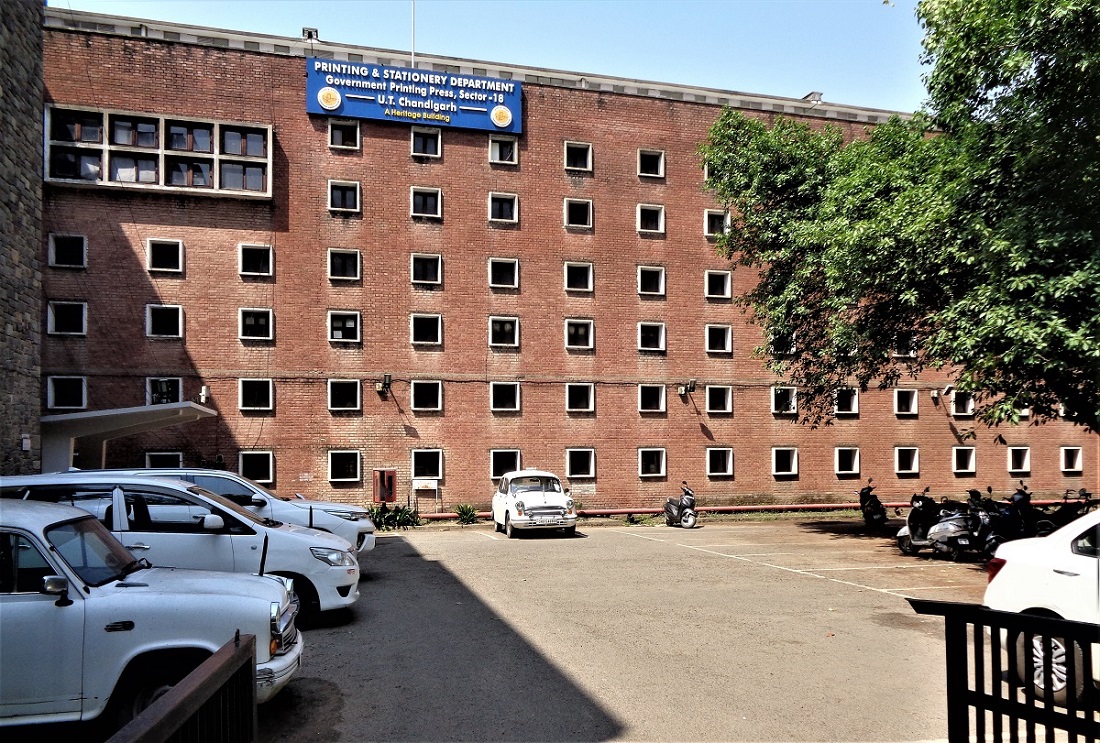 The large brick-face façade facing the approach road is punctuated by Maxwell Fry’s typical square windows with precast concrete surrounds in white colour. The repetitive use of this element on a large brick-faced wall lends the building a unique and strong visual character. A low-height cantilevered concrete porch in the corner makes the entry conspicuous and aesthetically pleasing. 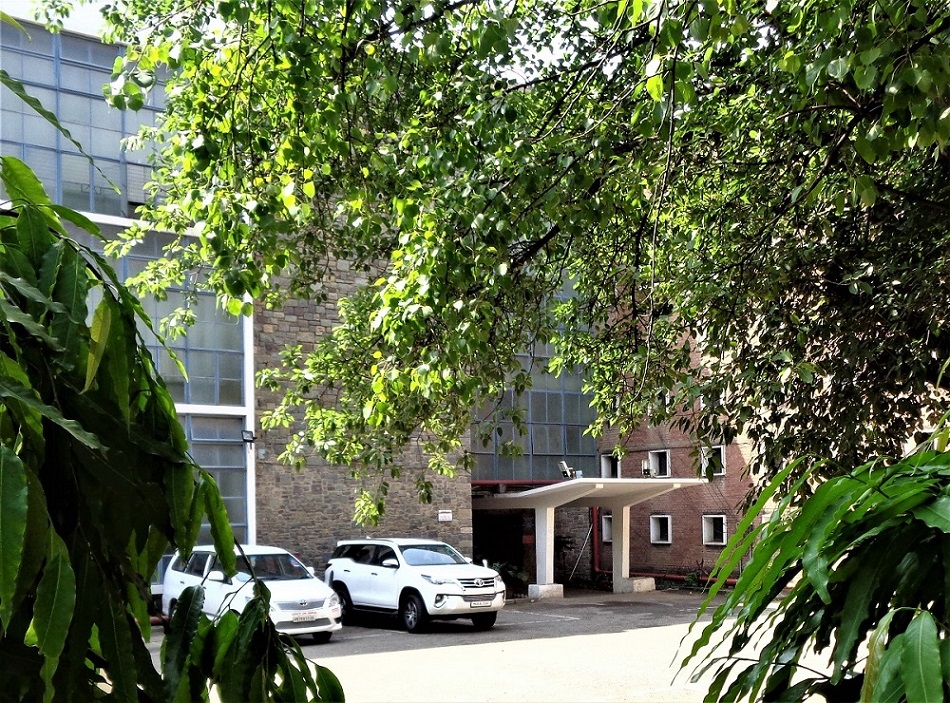 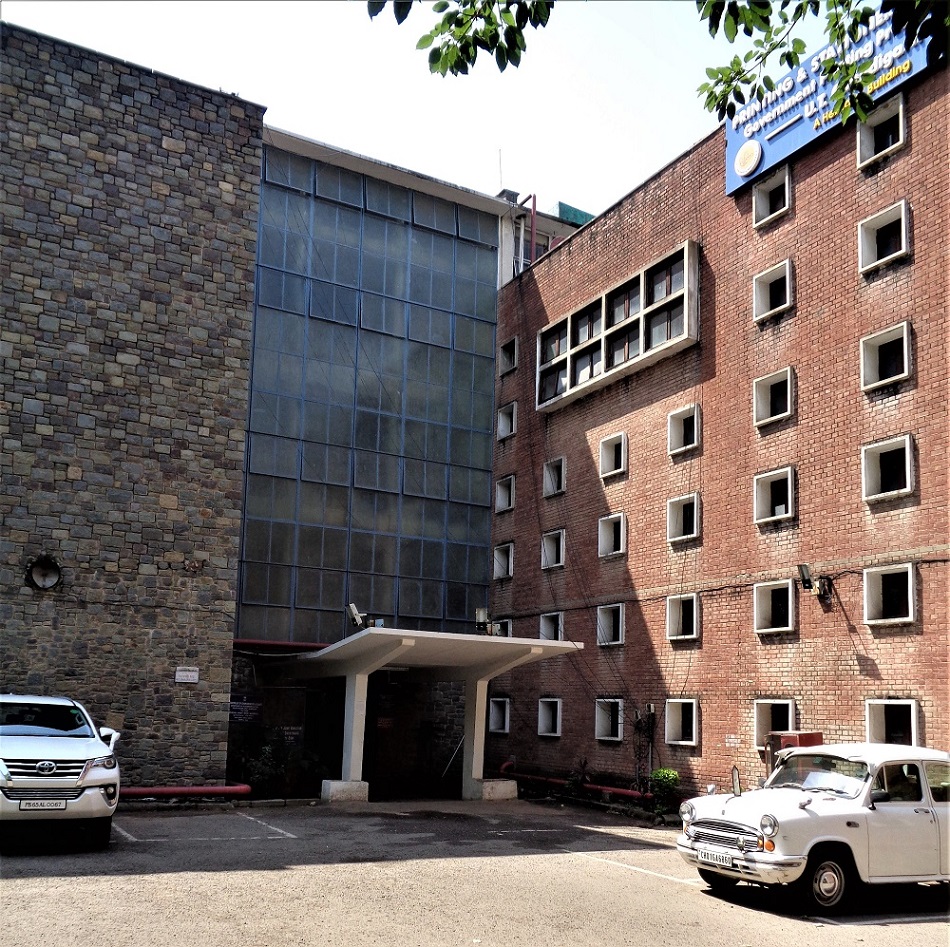 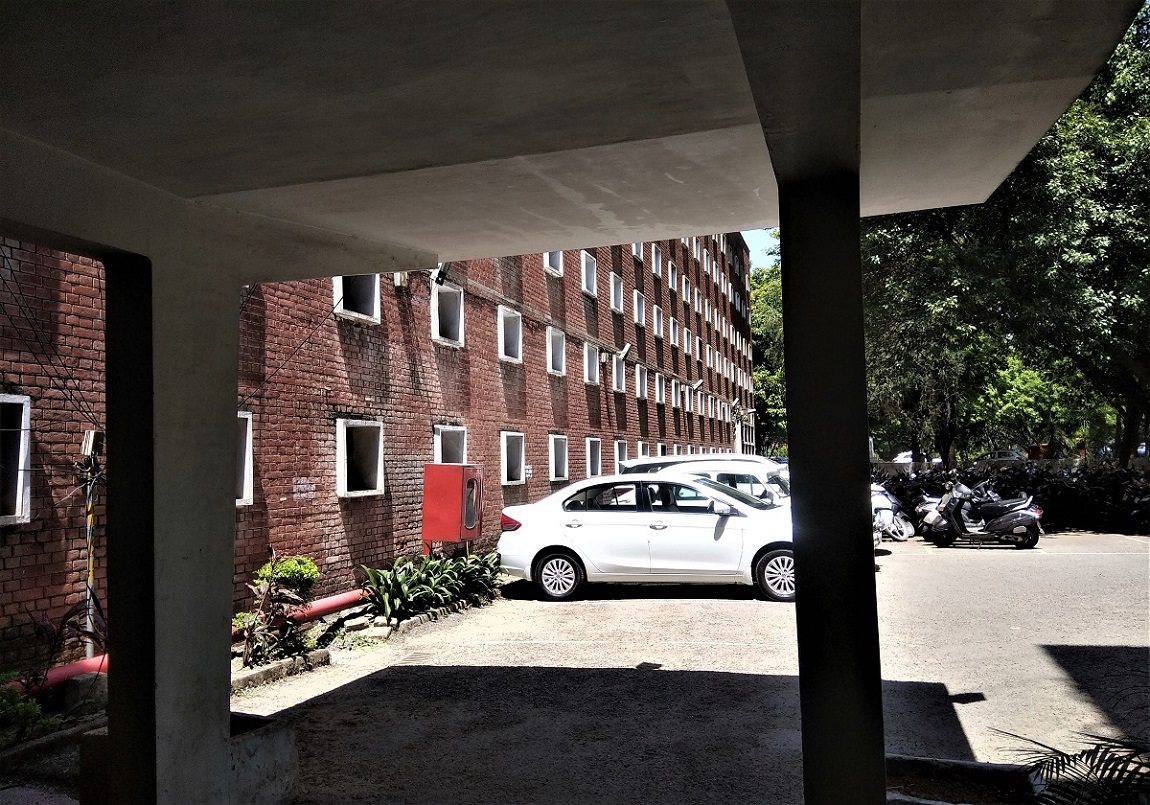 In spite of its outstanding architectonics, excellent built quality, and heritage status, the building needs urgent preservation, restoration, and up-gradation. The architectural fraternity expects the authorities to take the initiative in this regard at the earliest so as to save Chandigarh’s precious heritage. 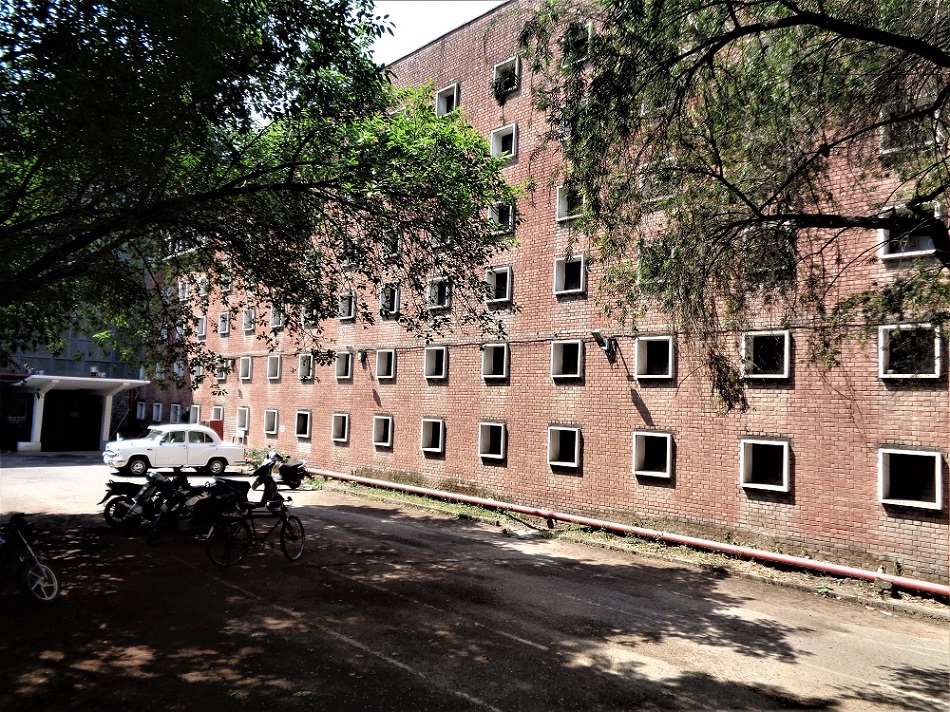 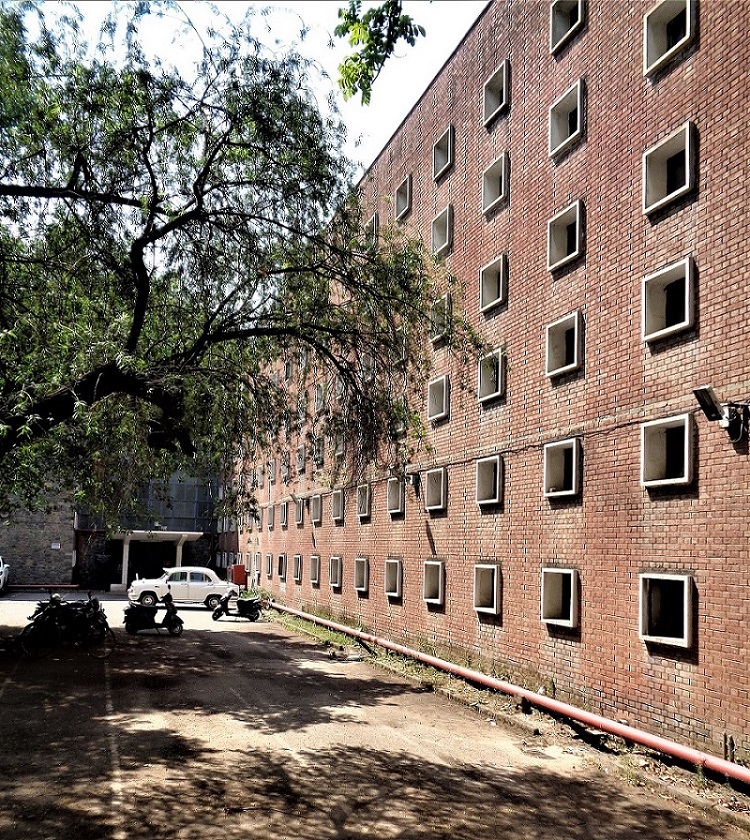 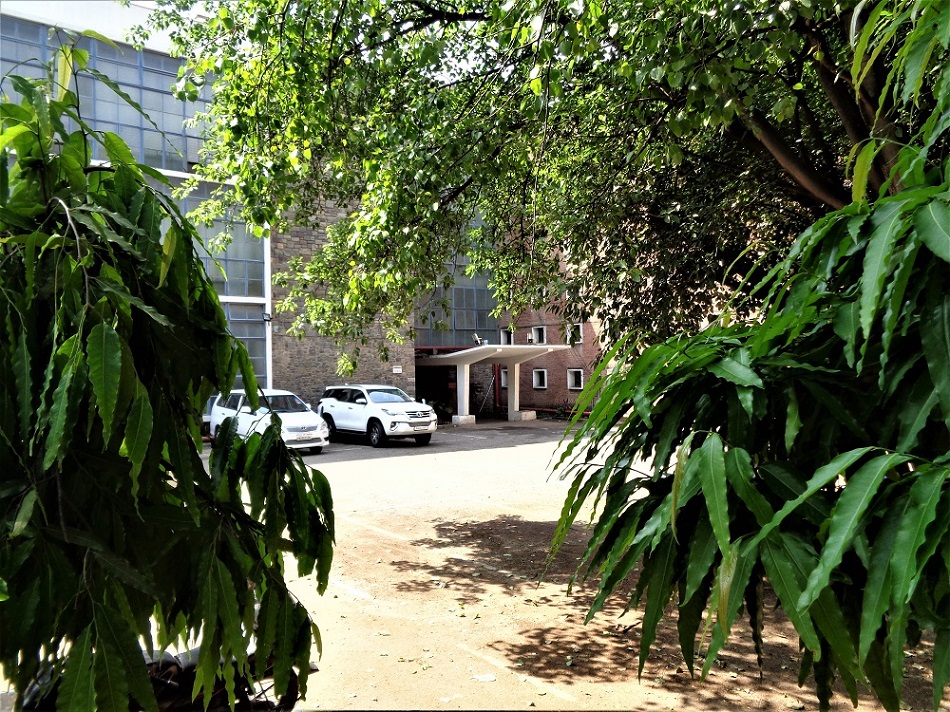 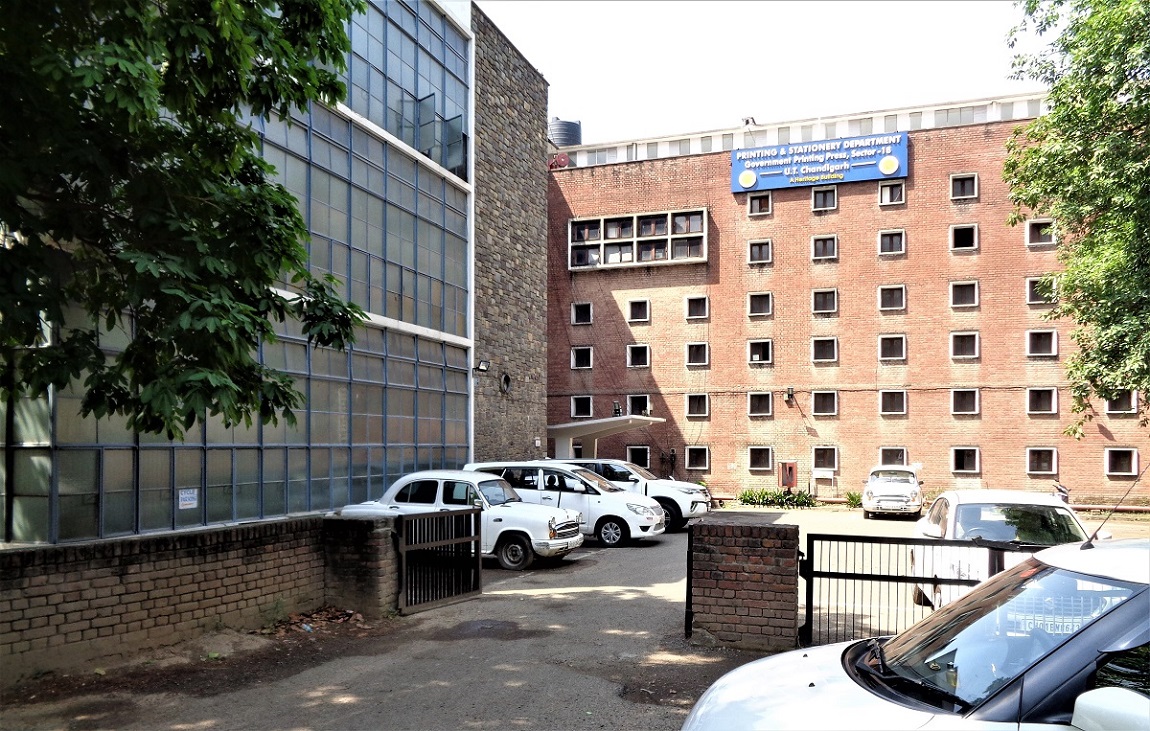 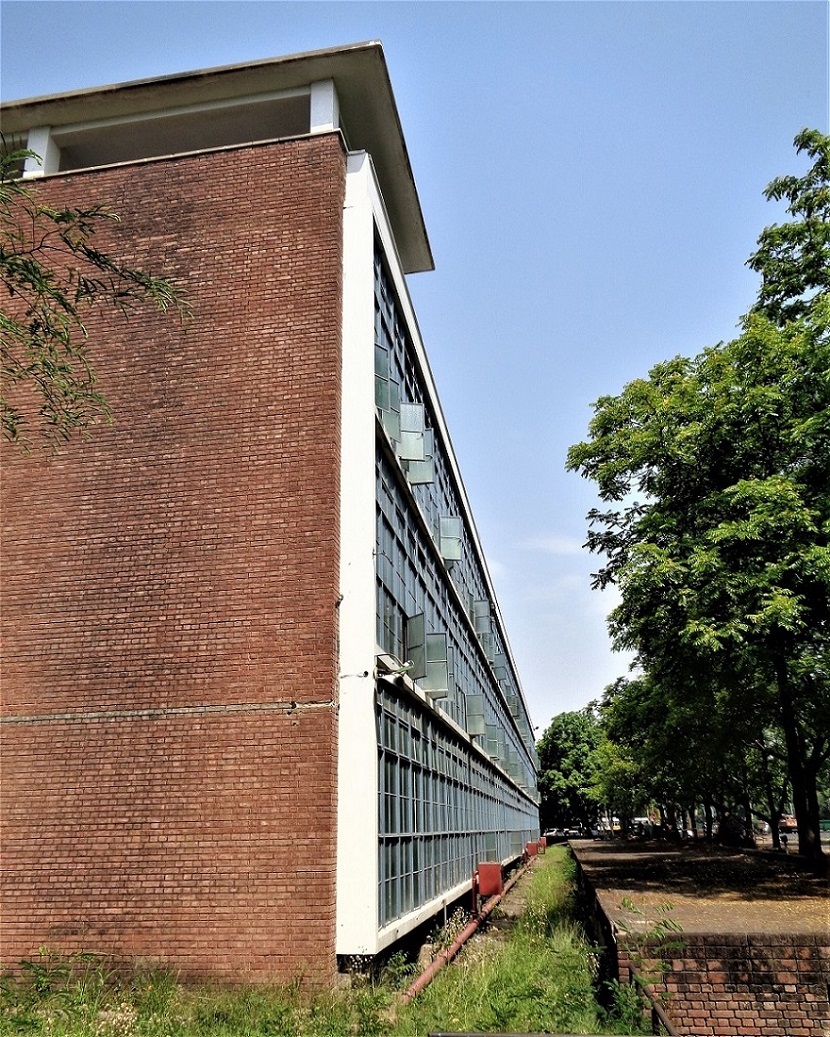 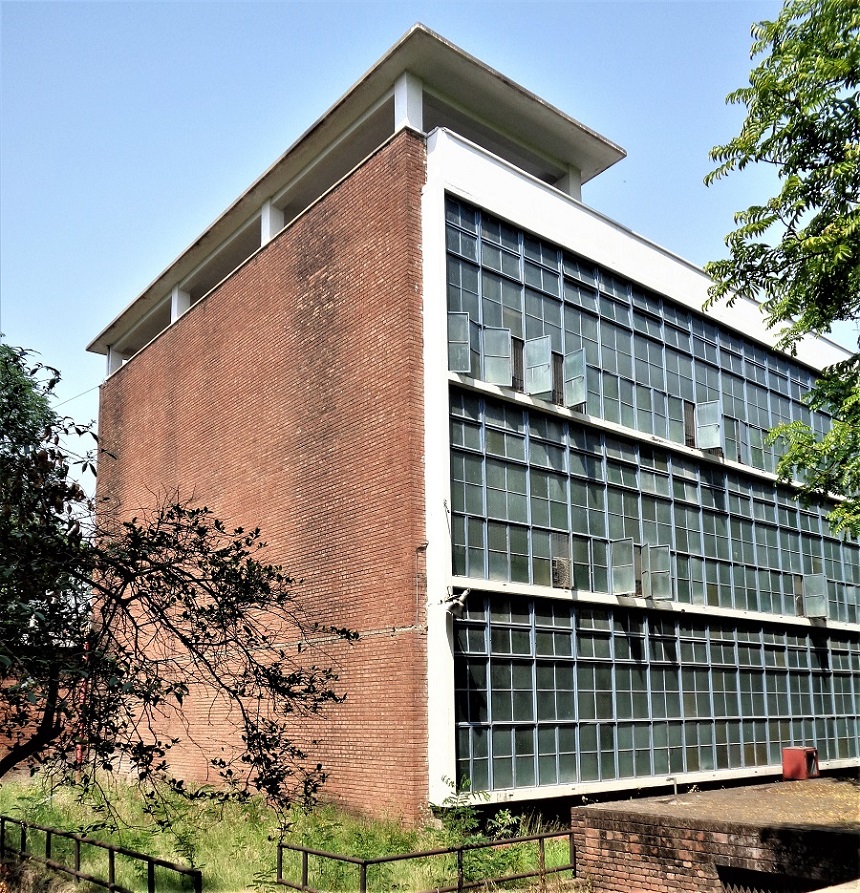 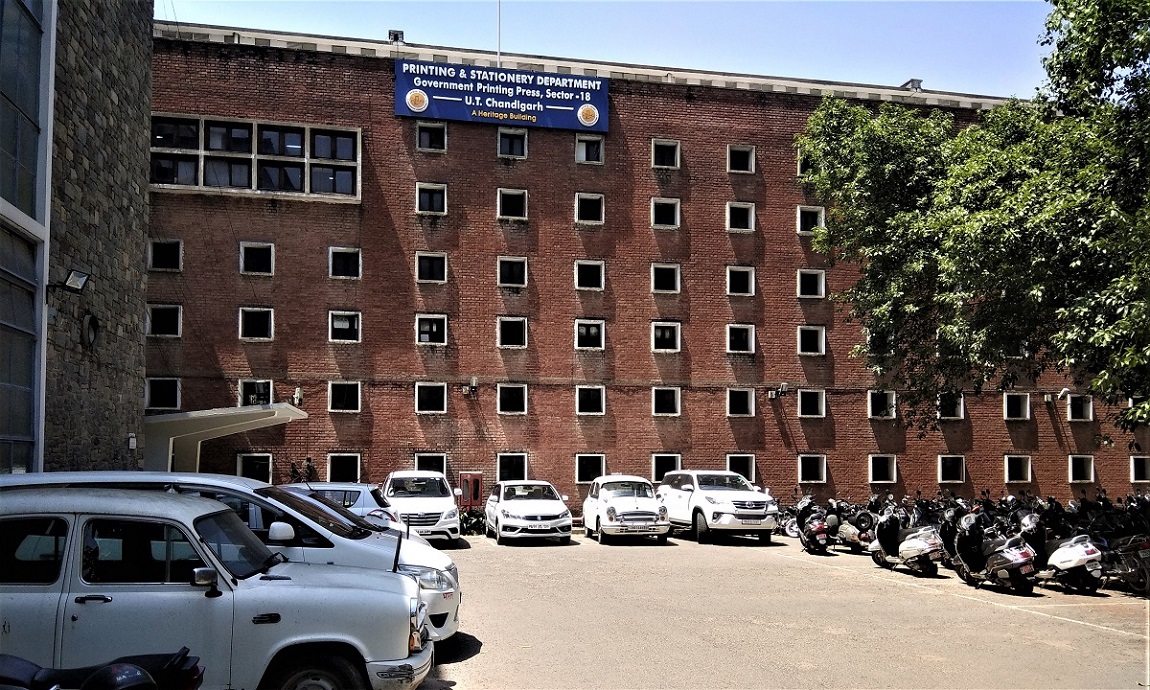 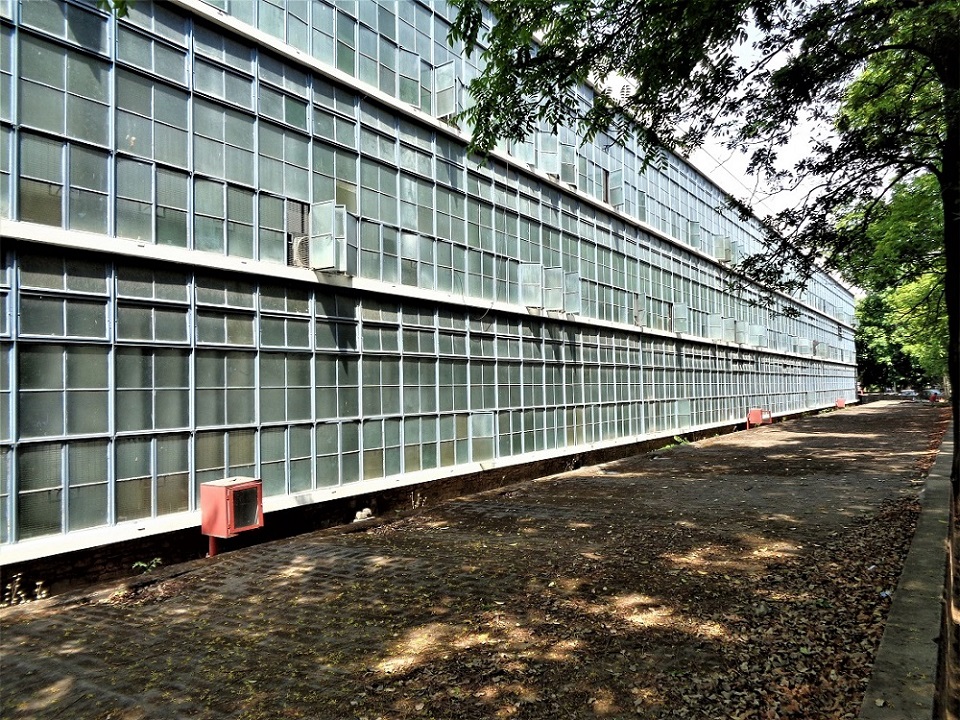 All images © Sarbjit Bahga except where mentioned.

> via personal visit to the building.