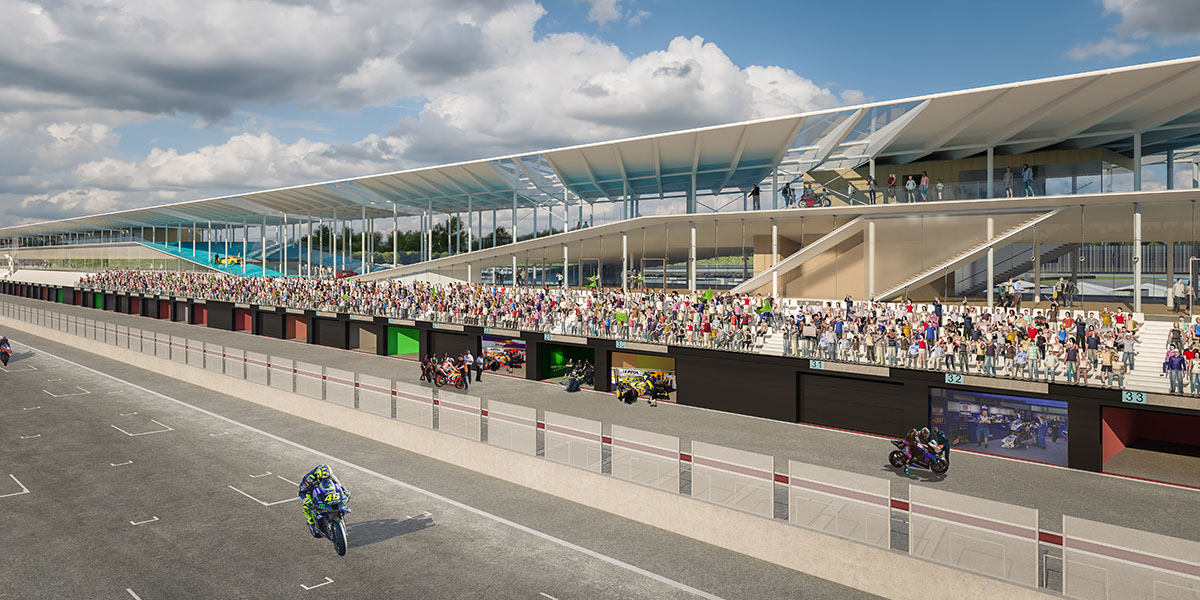 BORD Architectural Studio has won the first prize of the open architectural design competition of the Hajdúnánás MotoGP Circuit and Multifunctional Motorsport Complex in Hungary.

BORD Architectural Studio's winning design scheme focuses on the experience of racing alongside with safe motor racing. The dynamic style of the buildings was inspired by the function itself.

The competition for designing the multifunctional complex, which requires a special technology and is suitable for organizing both national and international racing events, was particularly compound.

As the team highlights, the entire site is designed with special attention to sustainability and functional operation. Apart from the circuit and its service buildings, the project will include other sport and educational facilities that are open to visitors all year round.

Covering a total of 500 hectare development area, the site is located right next to the M3 motorway on the north of Hortobágy, near Debrecen and Nyíregyháza. 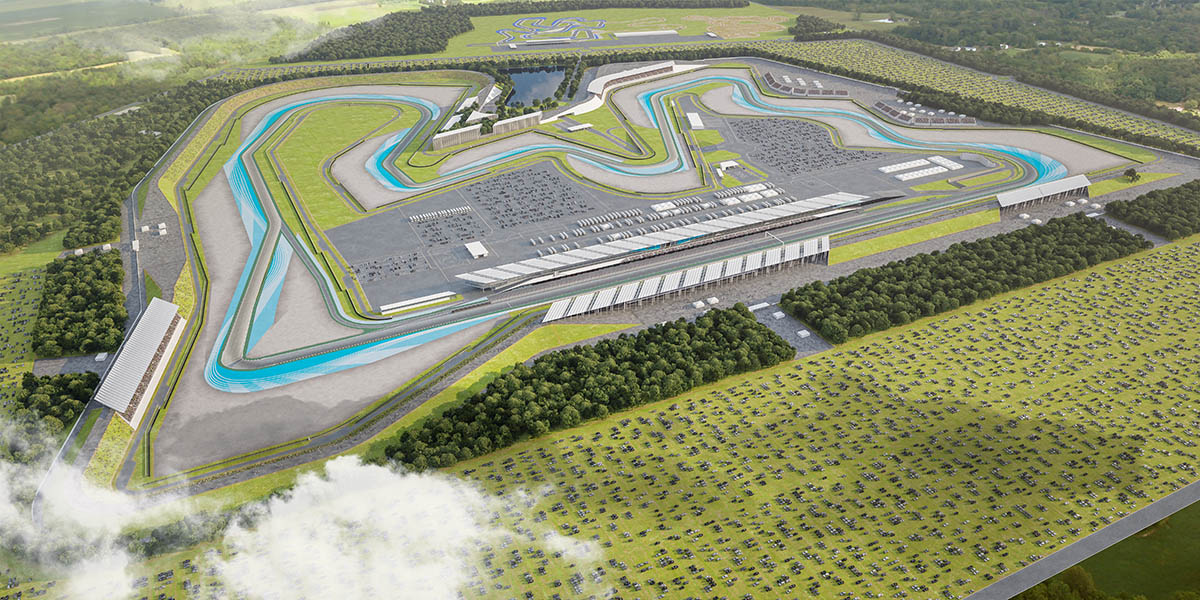 "Our relation to speed is fearful and enticing at the same time. Force of nature such as currents of rivers or the sight of fallen leaves racing in the air is particularly magnetic," said Péter Bordás, BORD Architectural Studio.

"Taming these natural forces and the experience of speed is not only amazing but also inspiring as these have evoked such inventions like the combustion engine, steam engine and other milestones of scientific advancement. The pattern of the circuits are the imprints of nature’s power lines."

"It is a peculiar, unique dance we have with gravitation. The endless fight of longing to detach and the necessity of attachment. This is why our architectural concept focuses on speed without boundaries and the experience of whirling dynamism," Bordás added. 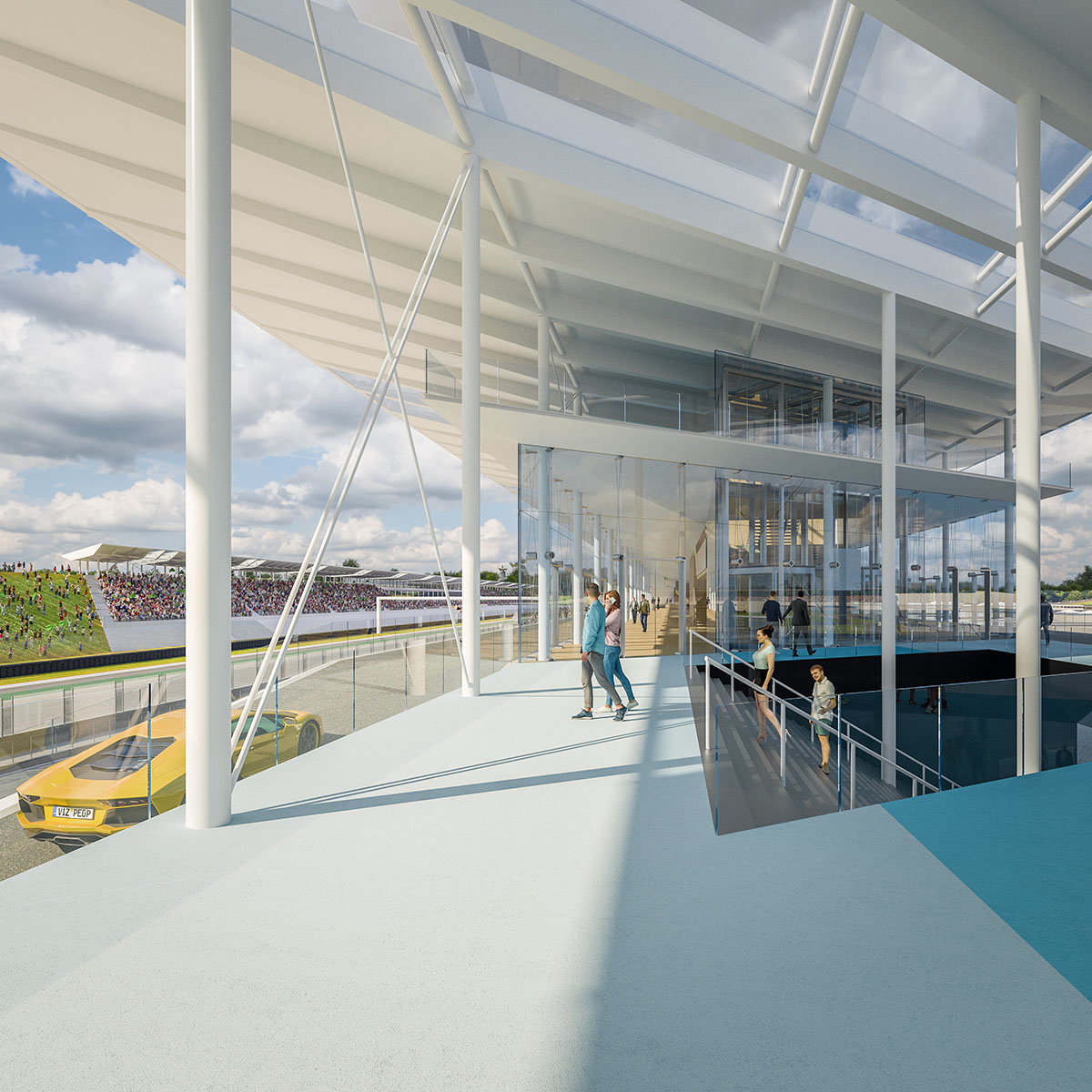 The design has offered a unique solution to the organization of complicated functions and internal circulation systems. Following the line of the central circuit there are two 12m high, 2km long natural walls.

These provide space for the functions surrounding the circuit and connect the public spaces with the grandstands while creating ground for the drifting speed and protecting against harmful noise pollution. Their special feature is that anyone can walk on top of them and observe the race at the same time from any given individual spot.

The main square of the complex connects to the outer edge of the wall. This is the visitor center on non-racing days. Services are available here all year round such as: go-kart, rally-cross, flat-track and dirt-track circuits.

An artificial lake enhances the aesthetics of the main area. Connecting to one of the most exciting part of the circuit some more additional development areas such as an incubator house, hotel and museum can be placed here in the future. 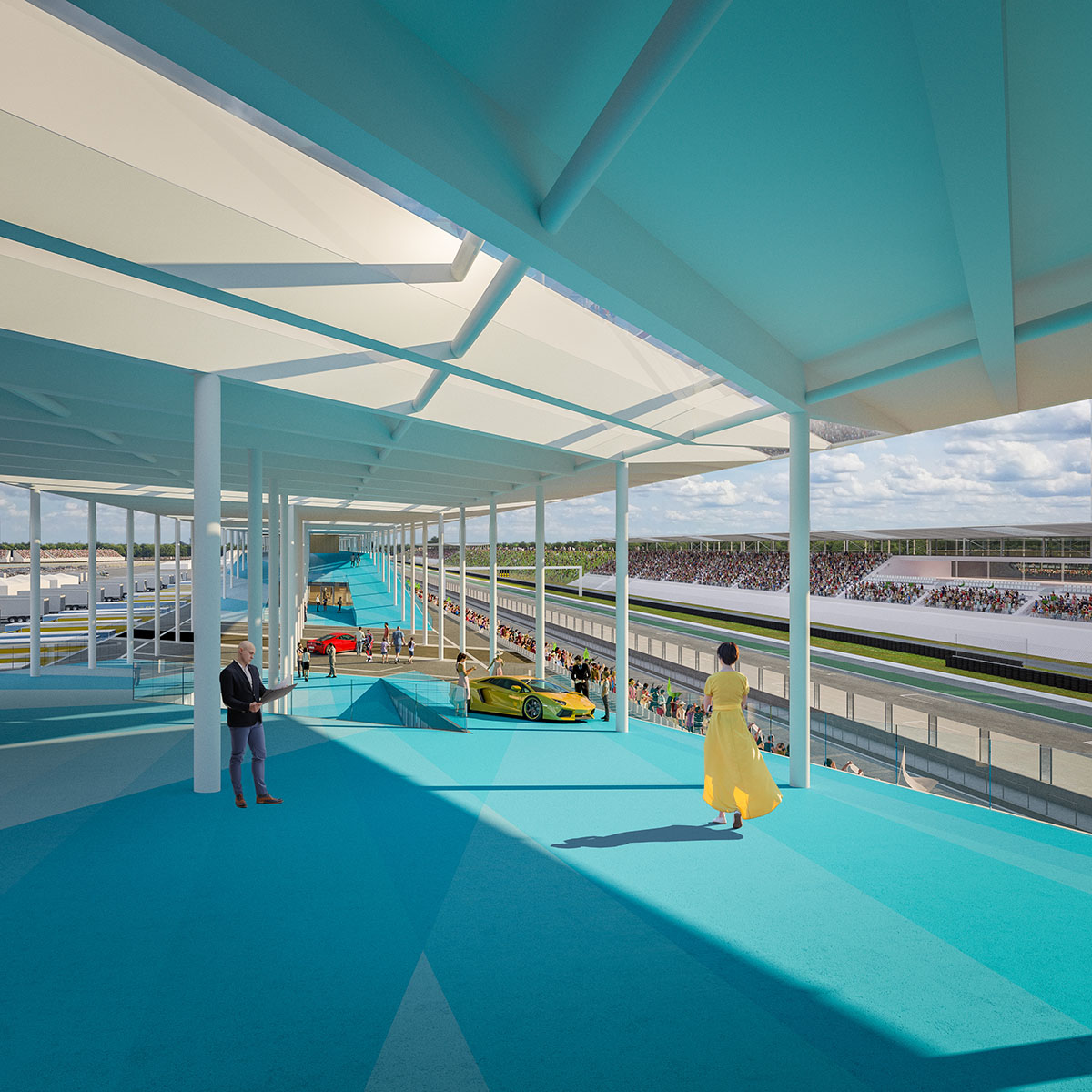 In the core of the complex within the walls there is the Moto GP circuit, the optimal track line of which is strictly restricted by the competition standards. The finish line of the circuit - or the “main street” of it was arranged on the north-south axis.

Alongside this are the main building of the race organization and the main grandstands. According to the decision of the designers all functions of organization are positioned in the protected area within the circuit for safety reasons.

"The character of the main building is defined by the multi level asphalt surface which can be interpreted as a statue of transportation," continued Péter Bordás. 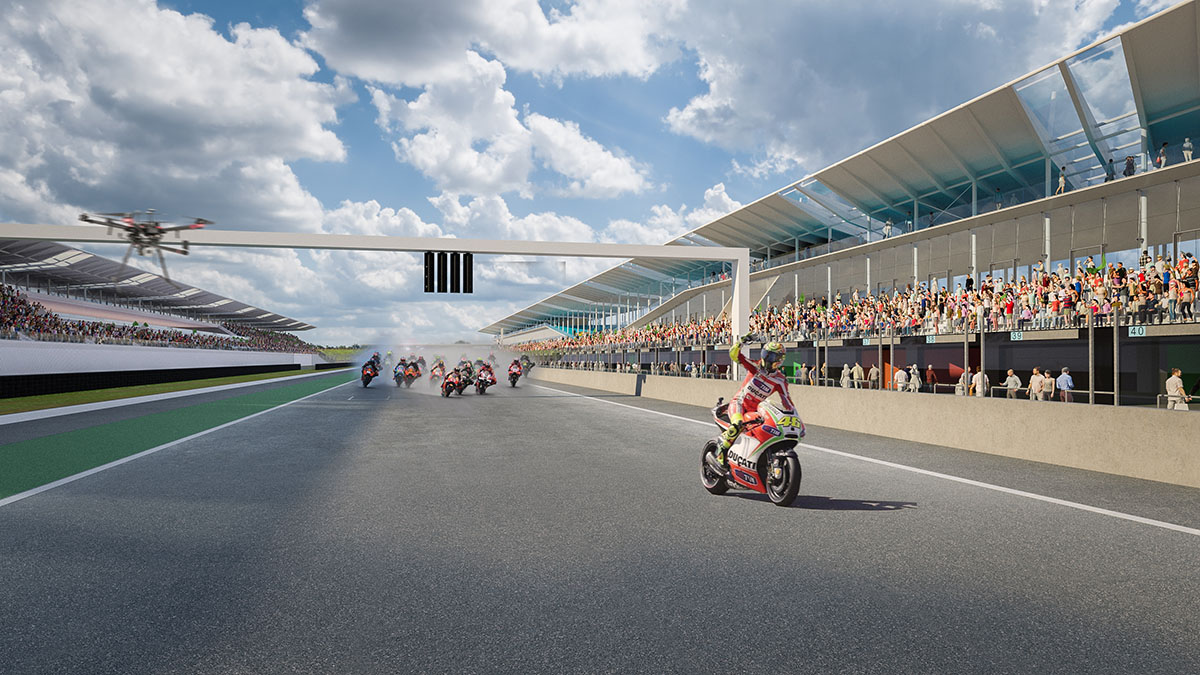 Main buildings of circuits are typical to act like a separation line between the paddock and the pit lane. In the winner concept press and VIP areas emerge like a ribbon from the asphalt surface of the circuit, creating a bridge above the pit garages.

Due to the ramps placed on the sides of the building this level can be accessed by car as well. This asphalted level recalls the unique painting of the run-off areas of the circuit. Here the audience is by all means part of the race and its atmosphere. 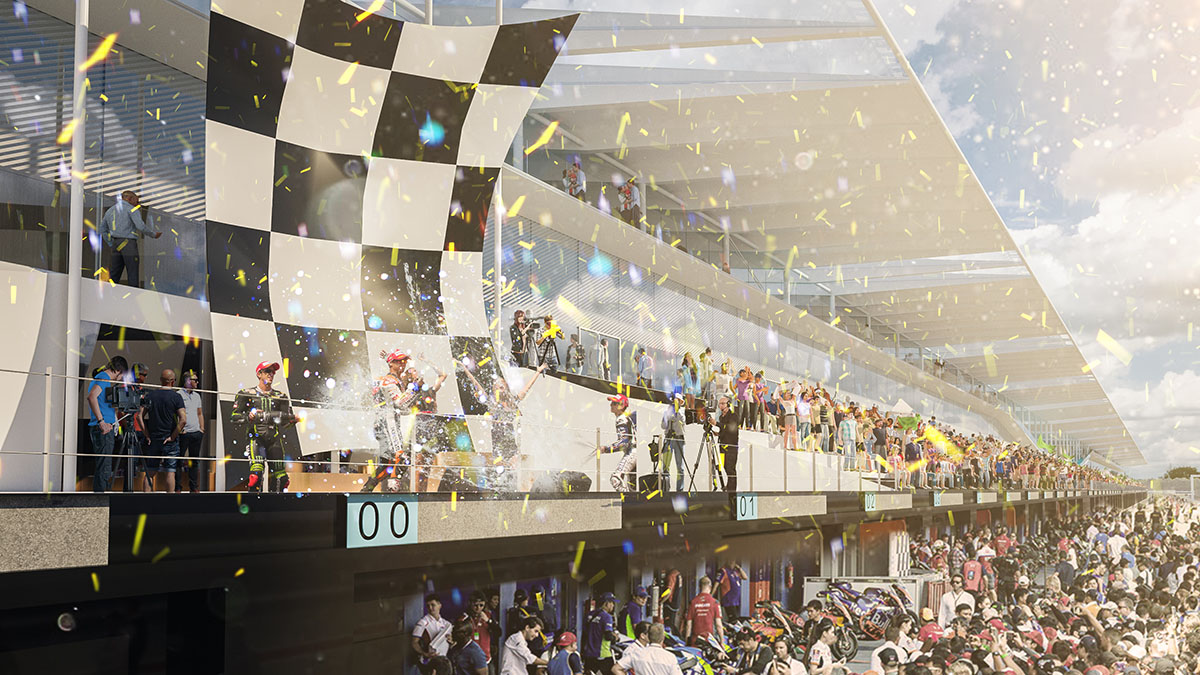 The main building adjusts to the dynamics of the race in its details and design: it resembles the world of automotive engineering. Its volume is protected by a segmented steel frame roof the tracing of which forms a whole with the roof construction of the main grandstand of the other side invoking the force line of boundless speed.