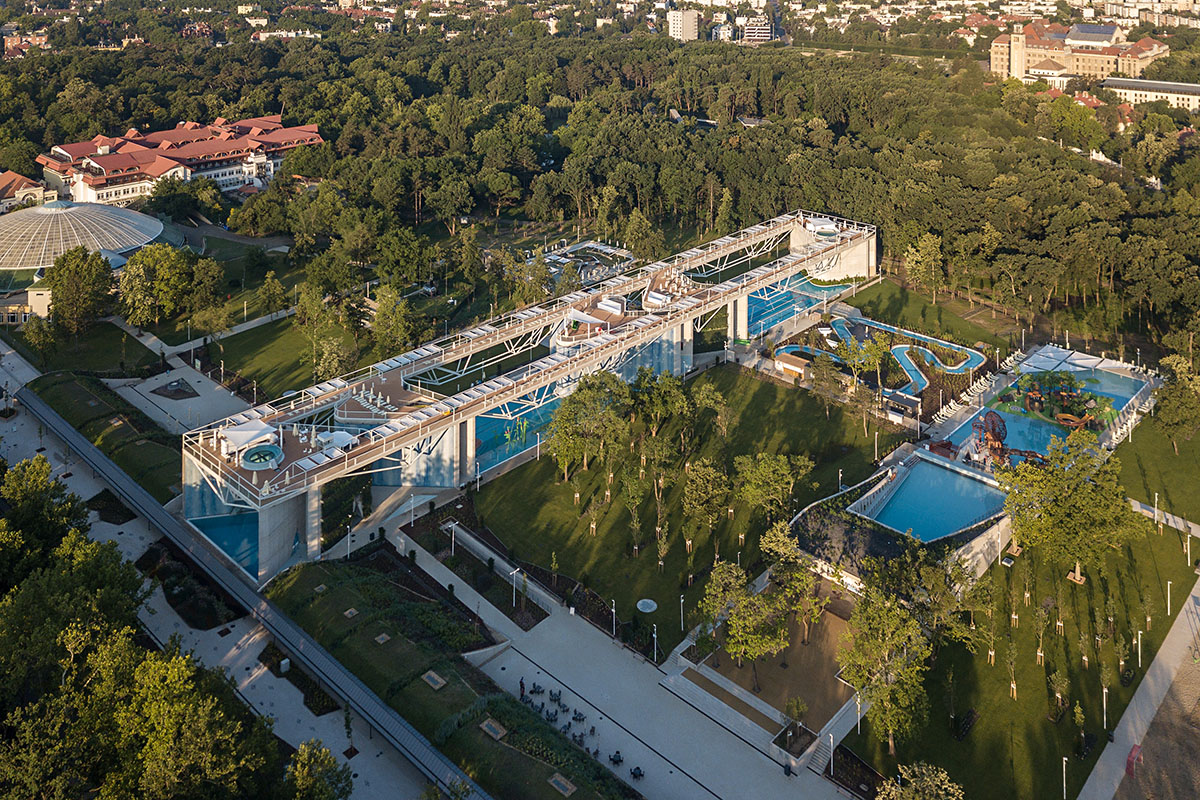 The complex, which is the latest characteristic building of the city park, is now ready to provide an incomparable experience to its visitors with its unique atmosphere.

"It is not unusual in the picturesque landscapes of forests that a tiny lake would hide within the trees. The erratic lakeside is populated by versatile flora: an oasis within the woods," said BORD Architectural Studio.

"A hidden, oasis locked up in a box deep within the woods. The result is a sculpture-like building that provides due space for the wood and is an essence of the forest lake and its surrounding flora. A special atmosphere is provided by the designed excess dimensions," added the studio.

In the heart of a dynamically developing city

Debrecen is not only the second most populated city in Hungary but it is also the cultural and scientific centre of the region.

As part of the ambitious long-term development plan of the municipality, the plan was to renew the environmentally protected city park and to turn into a unique recreational area, a must-see in Central Europe. Some of the already completed projects of the development were: the Nagyerdő Stadium, the Békás-Lake, the Open-Air Theatre of Nagyerdő, the Water Tower of Nagyerdő and the Ködszínház (Fog-theatre). One of the last items of the development plan was the Aquaticum Waterpark.

The location, Nagyerdő, protected by Natura2000 EU natural reserve program, is a highly favoured recreation area with the citizens of Debrecen. The first public bath of the city was built in 1826 in classicist style. In 1932 during drilling for oil some spa water was found incidentally which was then led through pipes into the Nagyerdő forest thus the constructions of a new spa began. 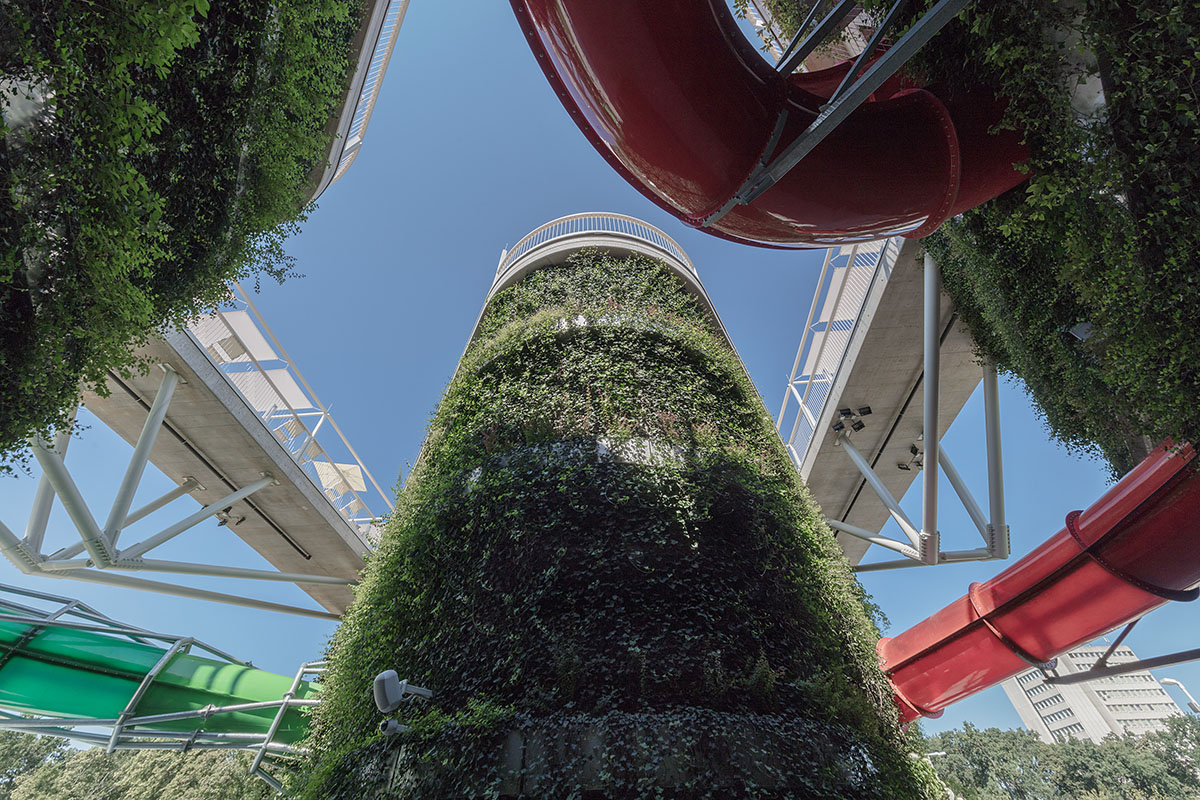 In the summer of 2015 Aquaticum Waterpark Debrecen issued an architectural design competition for the reconstruction of the spa. The city leaders wished to have a popular spa that is generally suitable and available for all age groups.

Apart from this they also emphasised the importance of the natural surroundings, the spa’s connection to Debrecen and it being the iconic symbol of the city despite its hiding in the shades of the grove. The design of BORD Architectural Studio won 1st prize of the competition. 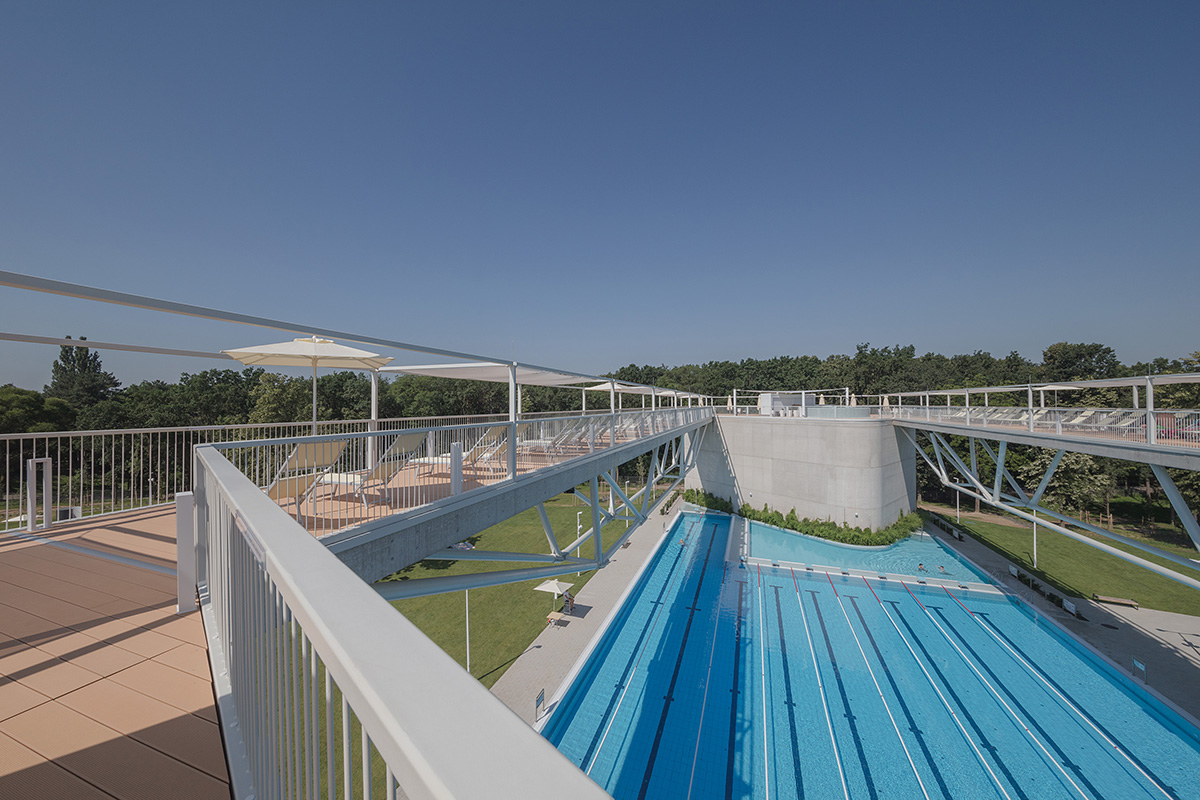 An unusual concept - an oasis locked up in a box

The architectural concept focuses on the life-giving aspect of water and the breathtaking forest environment. Water and flora appear on both horizontal and vertical surfaces of the spa: the water in the pools, the lawn, the water curtains, the waterfalls, the walls covered by plants. These surfaces create unusual artistic composition of spaces which introduce the visitors into this water world in a truly unique way.

The spa is on the same location as its predecessor used to be and it also connects to the already existing building of Aquaticum too. Due to the protected forest area the plotting mainly followed the original planting. The trees envelope the lawn of the waterpark area where the novel spa experience elements appear like pieces of a mosaic. 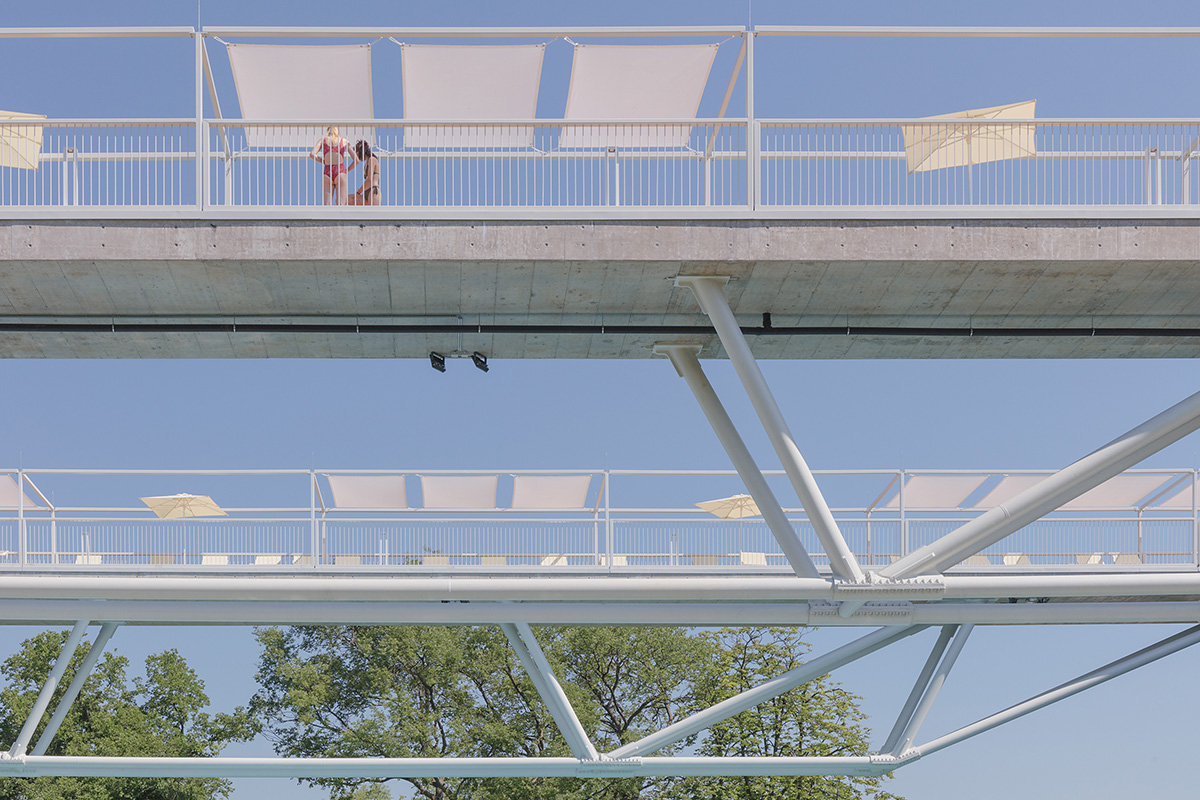 A rectangular shape made of water is in the centre that is permeated by green surfaces inspired by the surrounding forest. The sculpture-like, spectacular main unit places water and the forest environment into a completely new dimension providing a wonderful selection of the natural beauties of Nagyerdő to the audience.

The unusual architectural concept drew attention straight from the planning phase. It appeared in a number of international magazines and was also displayed in DECODE 2019 – The Space for ARTchitecture, an exhibition organised annually by BORD.

The main entrance of the Spa is from the recently completed Nagyerdő promenade. The long, single storey entrance, which is situated on the property line, connects the new pedestrian pathway and the waterpark like a bridge. The entrance building includes the changing rooms, the restrooms, the shops and a colourful food court as well.

The restaurants, featuring a diverse selection of international cuisine, are going to be accessible from the waterpark and the pathway as well. The long, flat volume of the building settles in the landscape beautifully looking at it from the direction of the spa. On its top there is a green roof, the curvy shape of which resembles a wave.

From the direction of the entrance the first thing we see is the central visual piece of the waterpark: a 196m x 26m floor-place size, 12m high cuboid.

This unit is open and permeable on all sides and incorporates a number of functions such as: a 4m deep swimmingpool, an adventure pool with a 400m long slide, a water-cave, another swimming and teaching pool, a thermal water pool, a relaxation zone, a sunbathing terrace and bars. In between the different functions meander a number of 12m high walls covered in greeneries and water. From the sunbathing terrace the visitors can feast their eyes on the Nagyerdő from a completely new perspective. The kids’ water theme park was inspired by the animation “Treasure Planet” with its pirate boat sailing in between stars. This super exciting pirate nest with cannons, balloons and slides were created with the help of Eleven Ltd.

There are different pools for the different age groups of children: kids’ pool, baby pool, spray park and a wave pool as well. There are three thermal water pools, a ‘lazy river’ and a kids’ theatre too. The new spa is looking forward to welcome its visitors with 5624m2 water surface and an incomparable water experience. 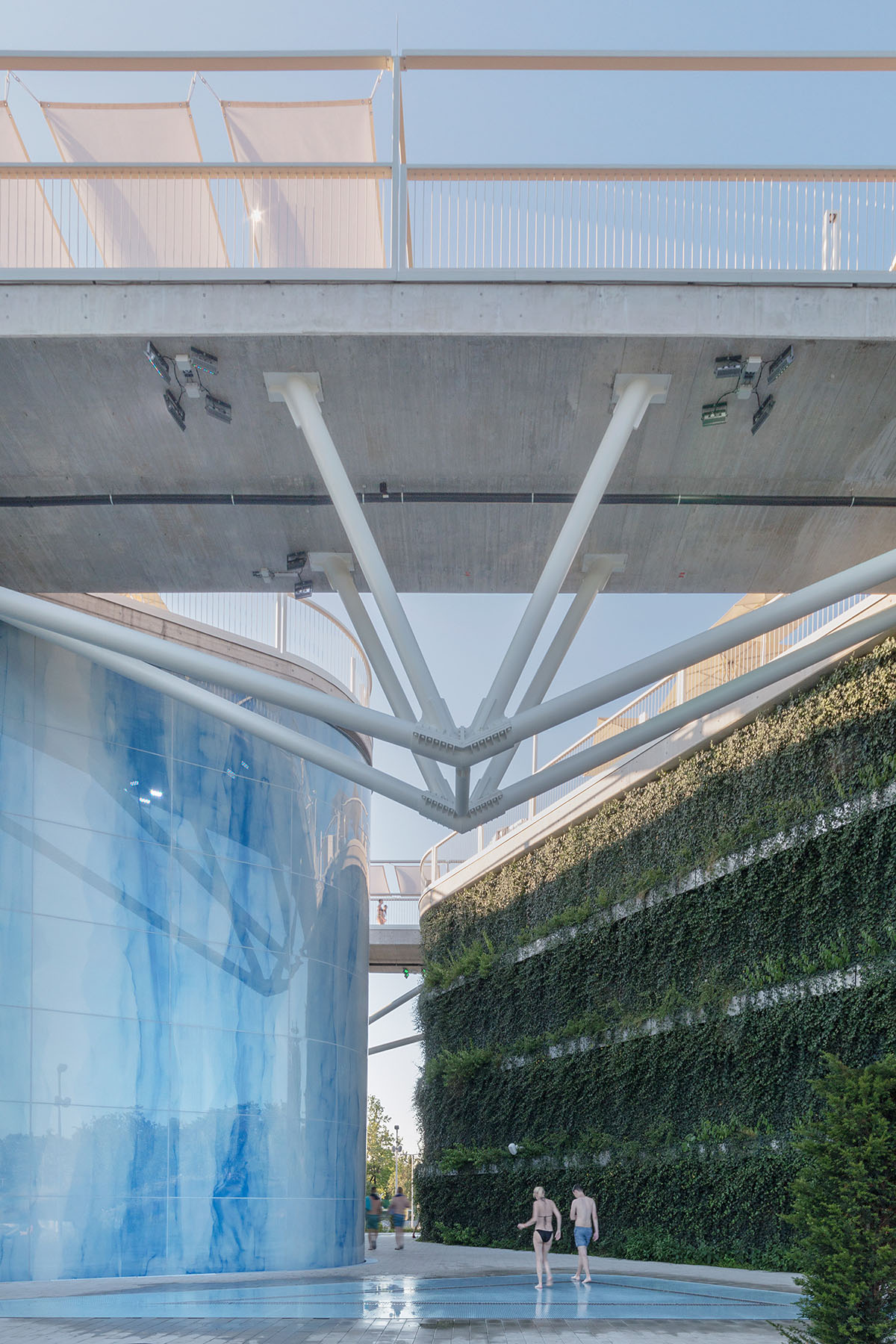 Since the heating requirement of the spa is vast it was essential to use ecological energy resources when planning. The heating system of the complex uses the heat released when the thermal water is cooled to suit human needs. A heat pump system was also installed which uses the heat waste of the water flowing out of the pools.

This way more than half of the entire energy need of the establishment can be provided by green energy. BORD HVAC Engineering has implemented the “green concept” of the building from a technical point of view too and with its solutions it greatly contributed to the waterpark’s representing the mission statement of BORD Architectural Studio. 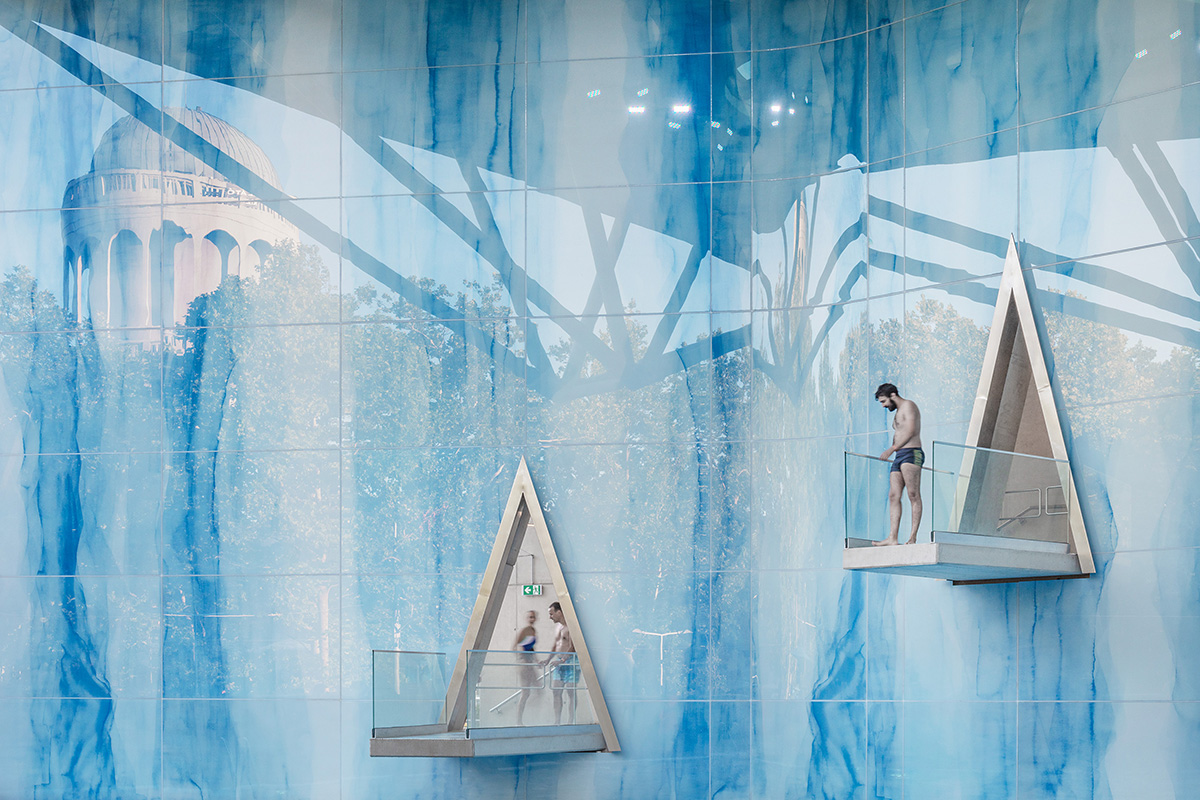 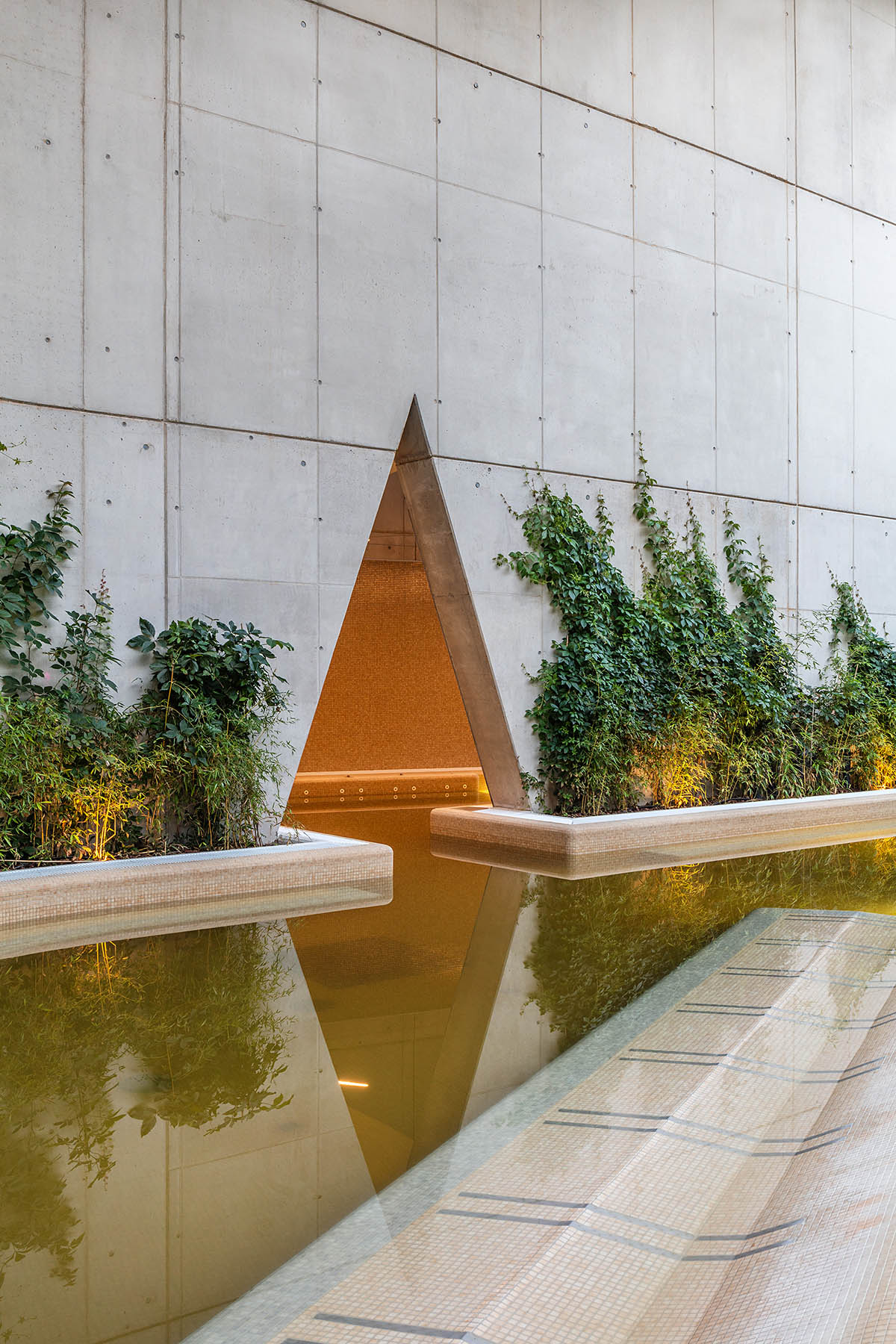 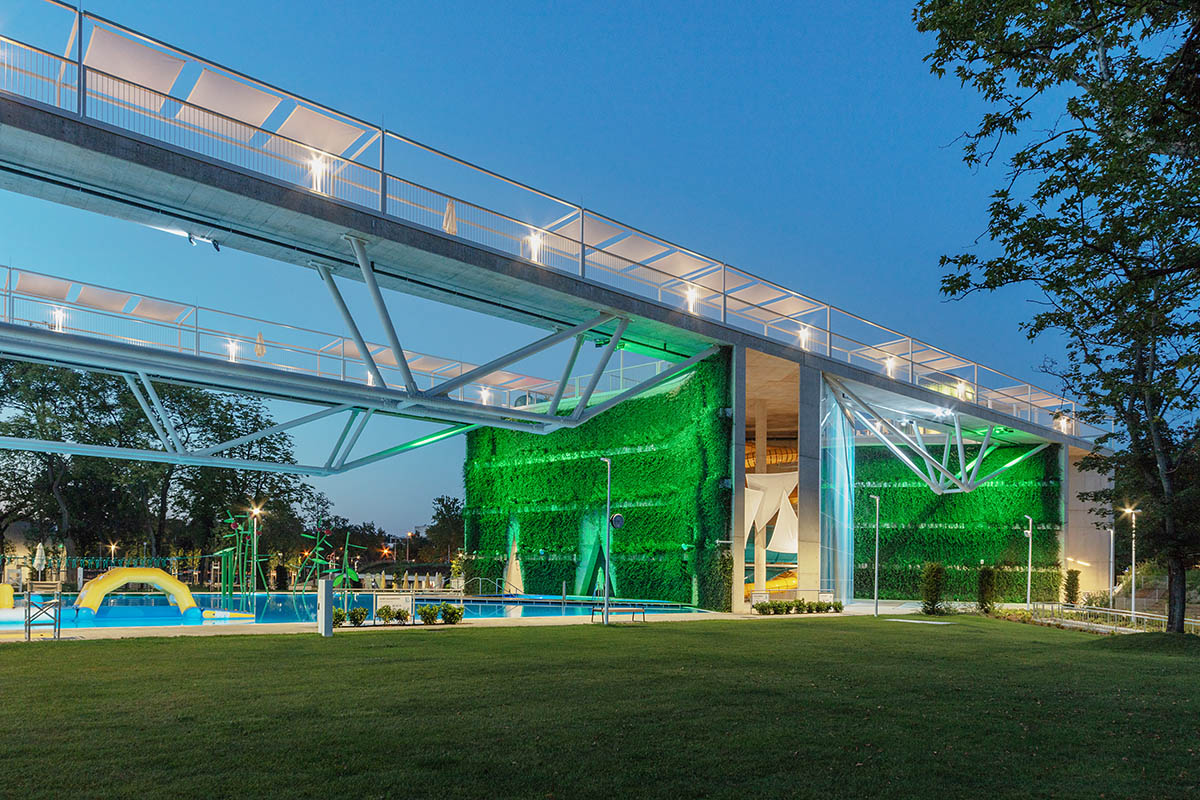 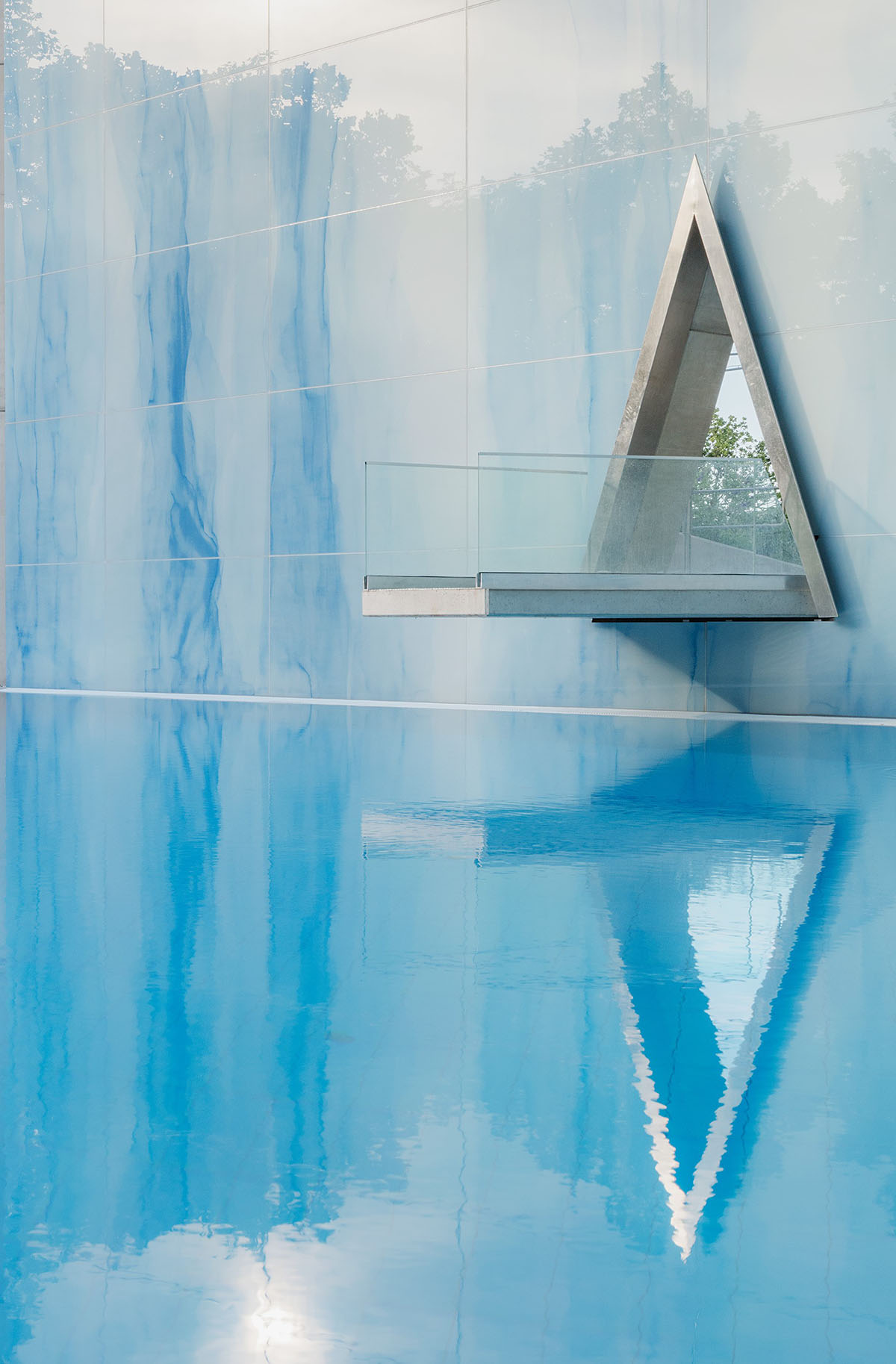 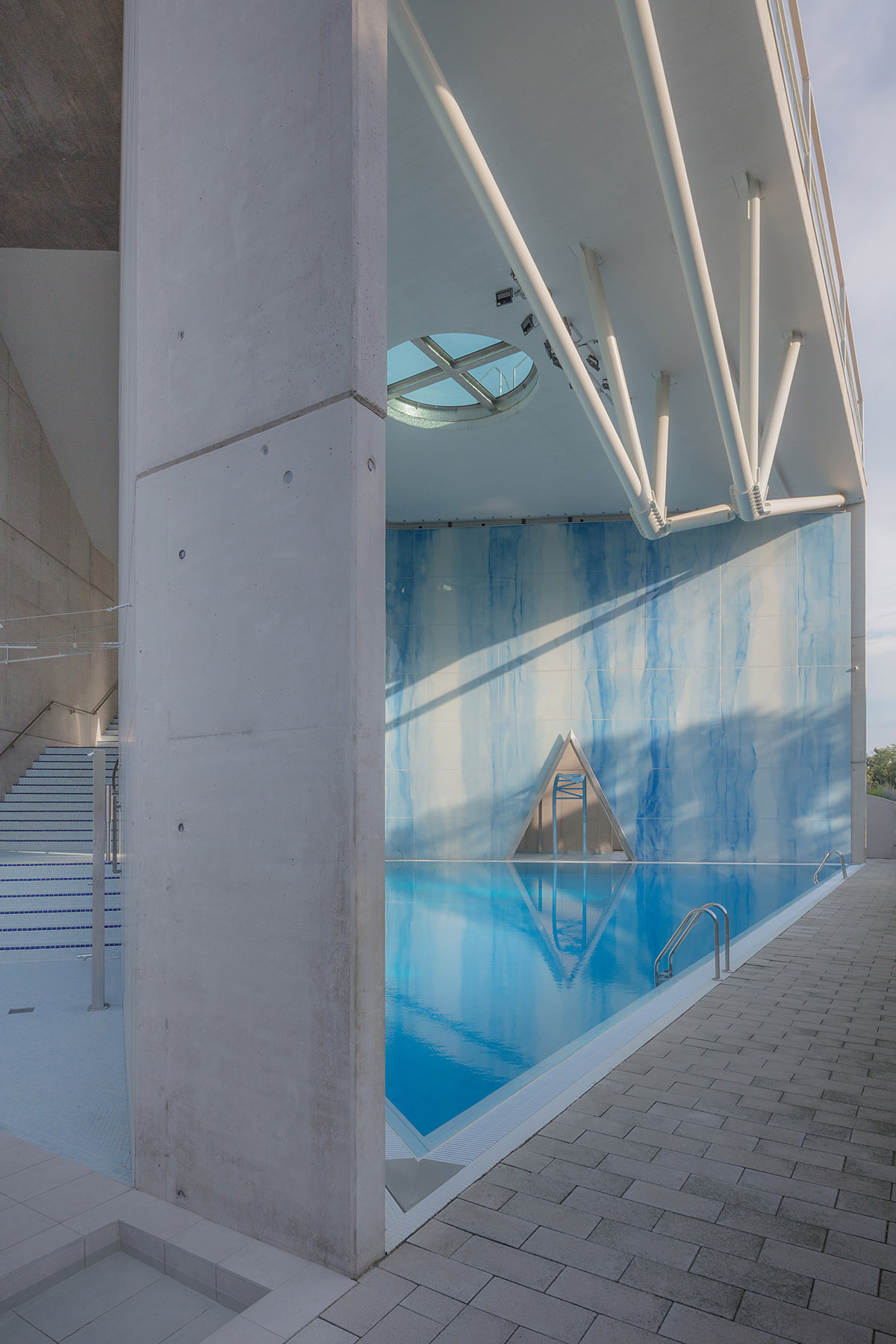 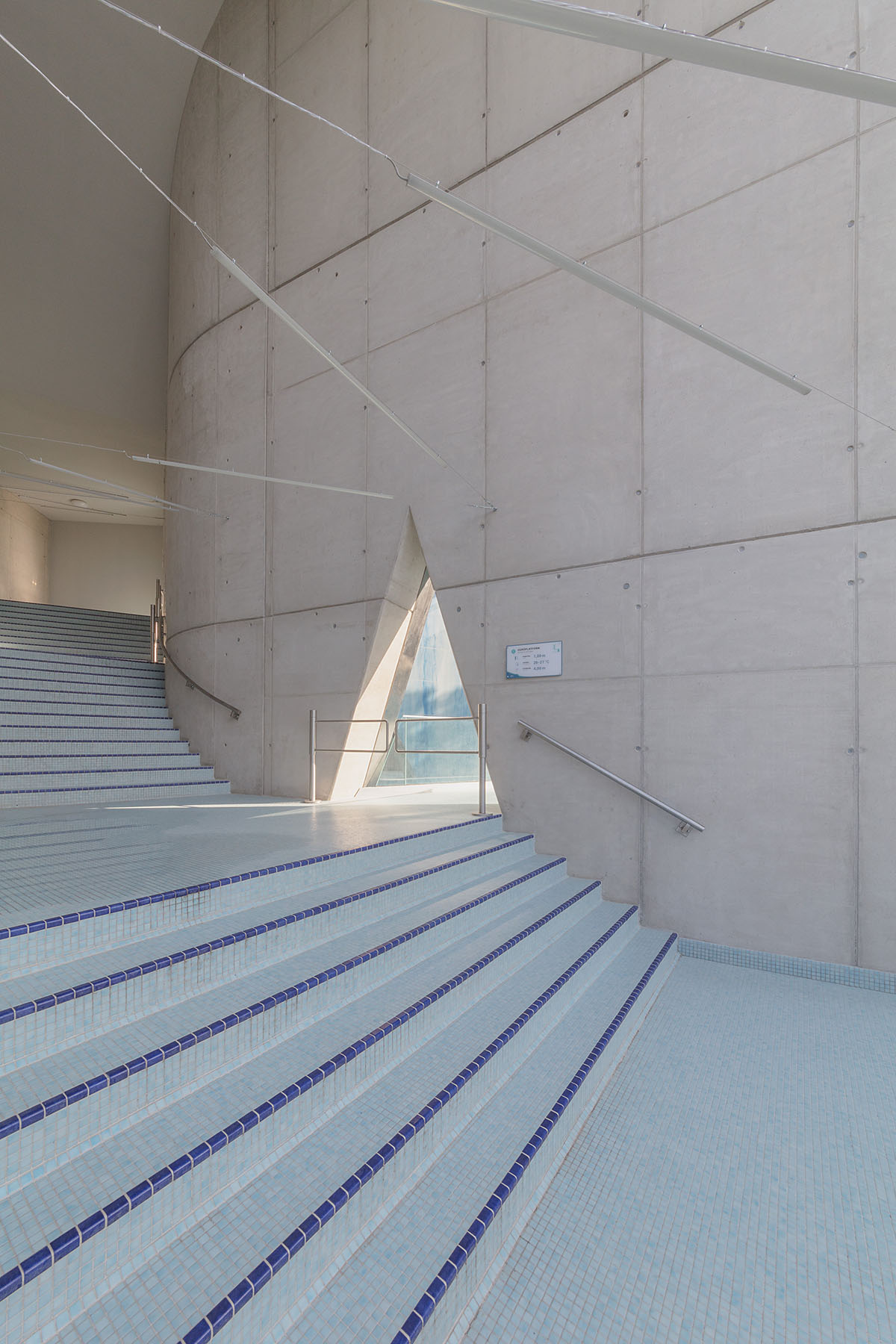 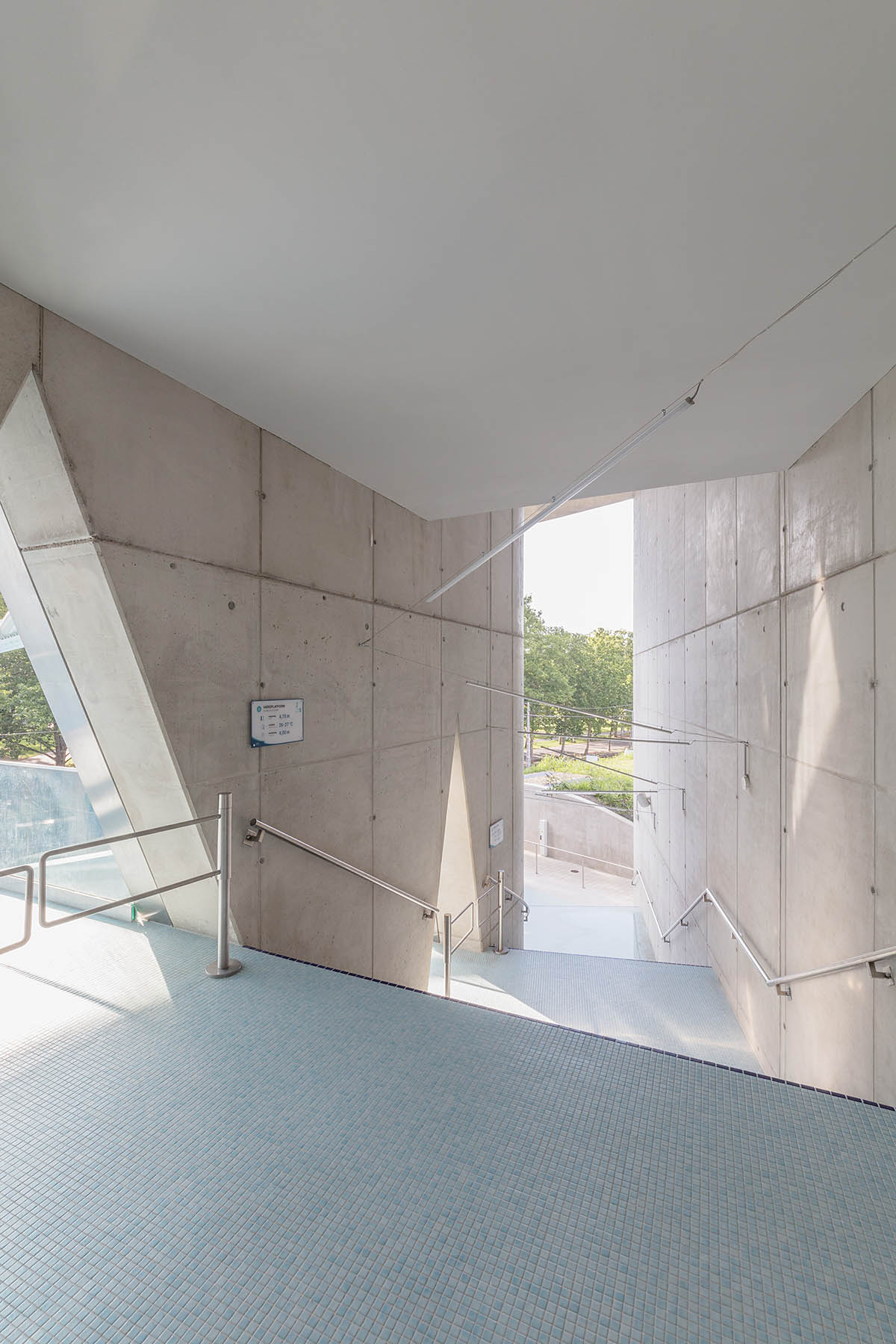 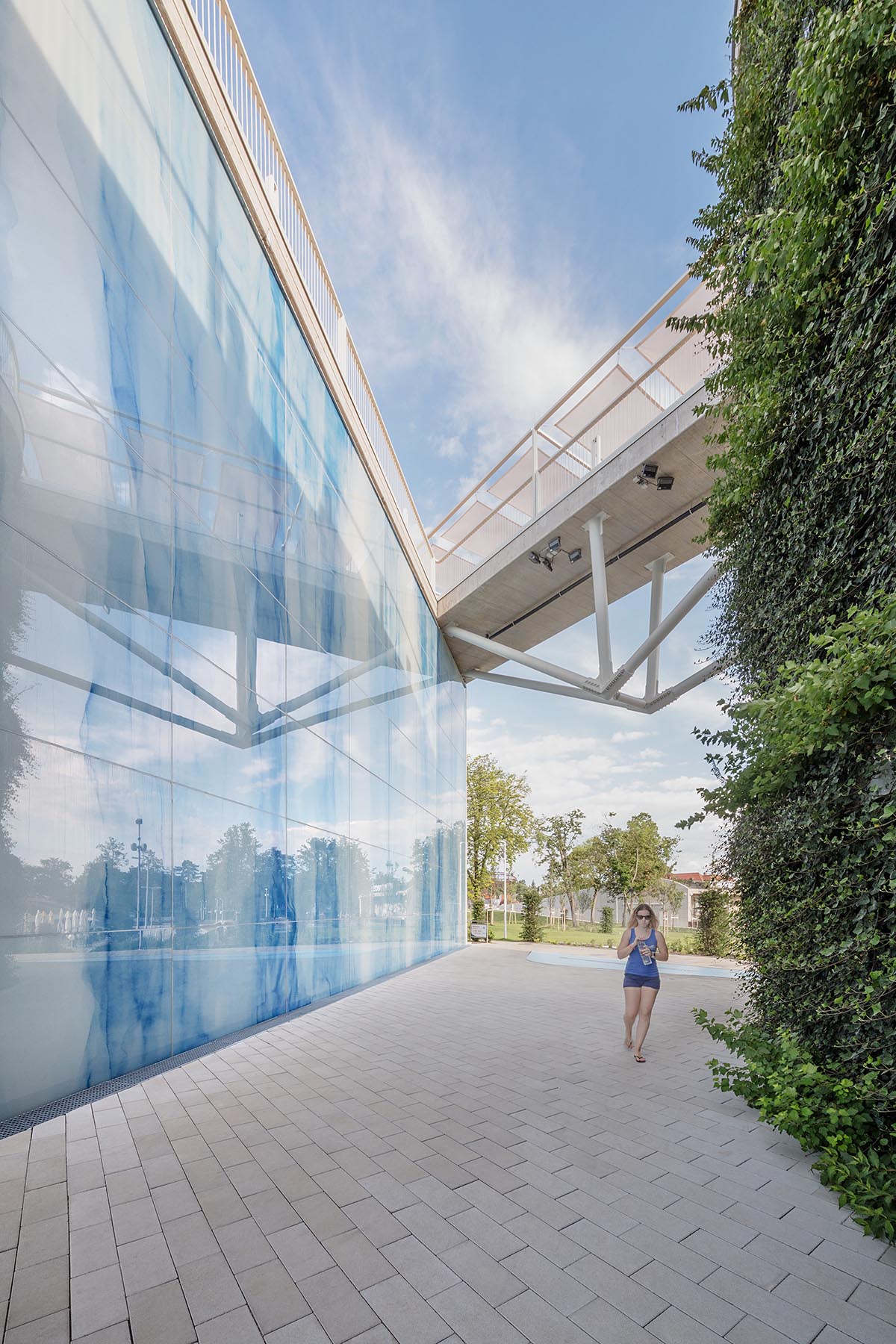 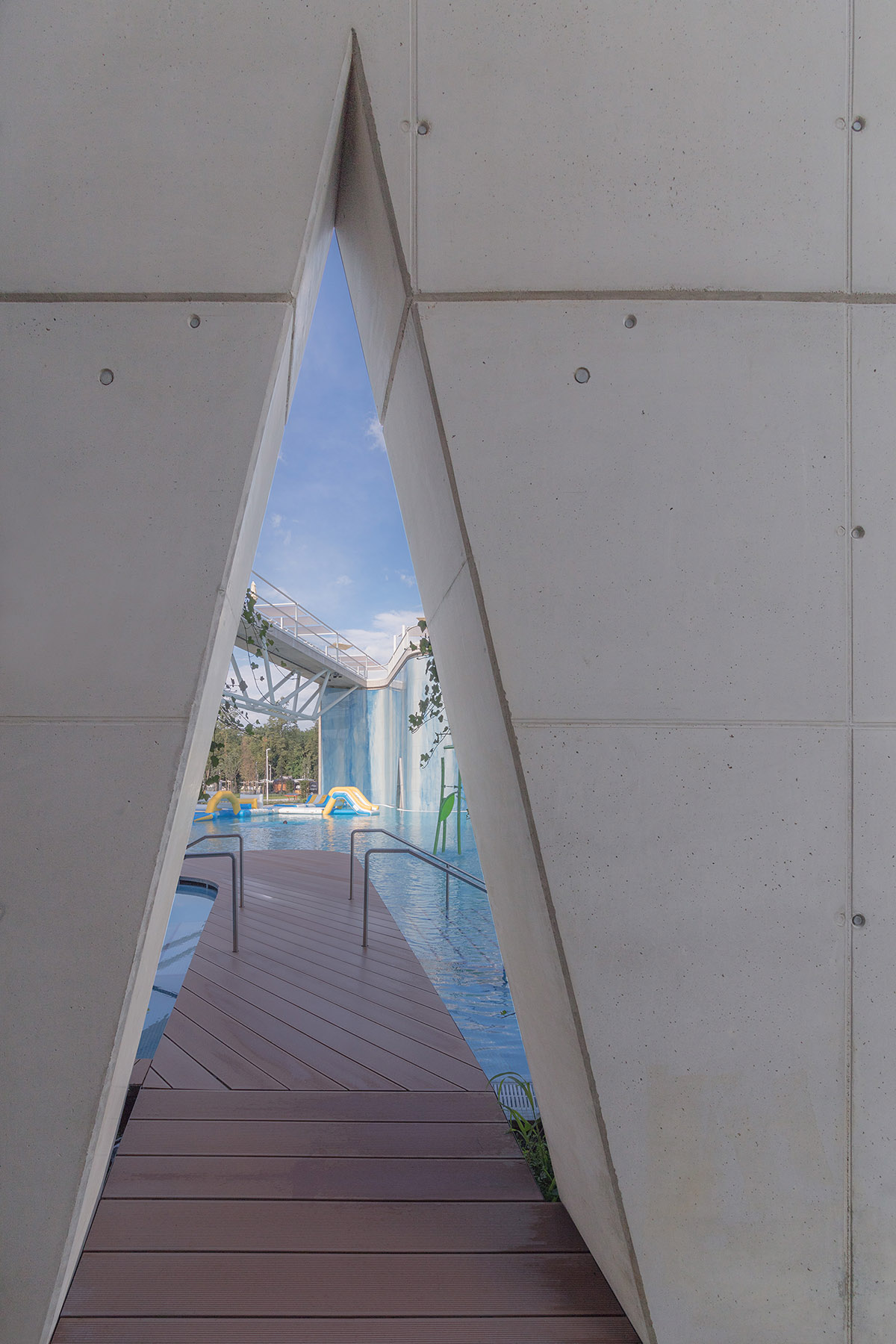 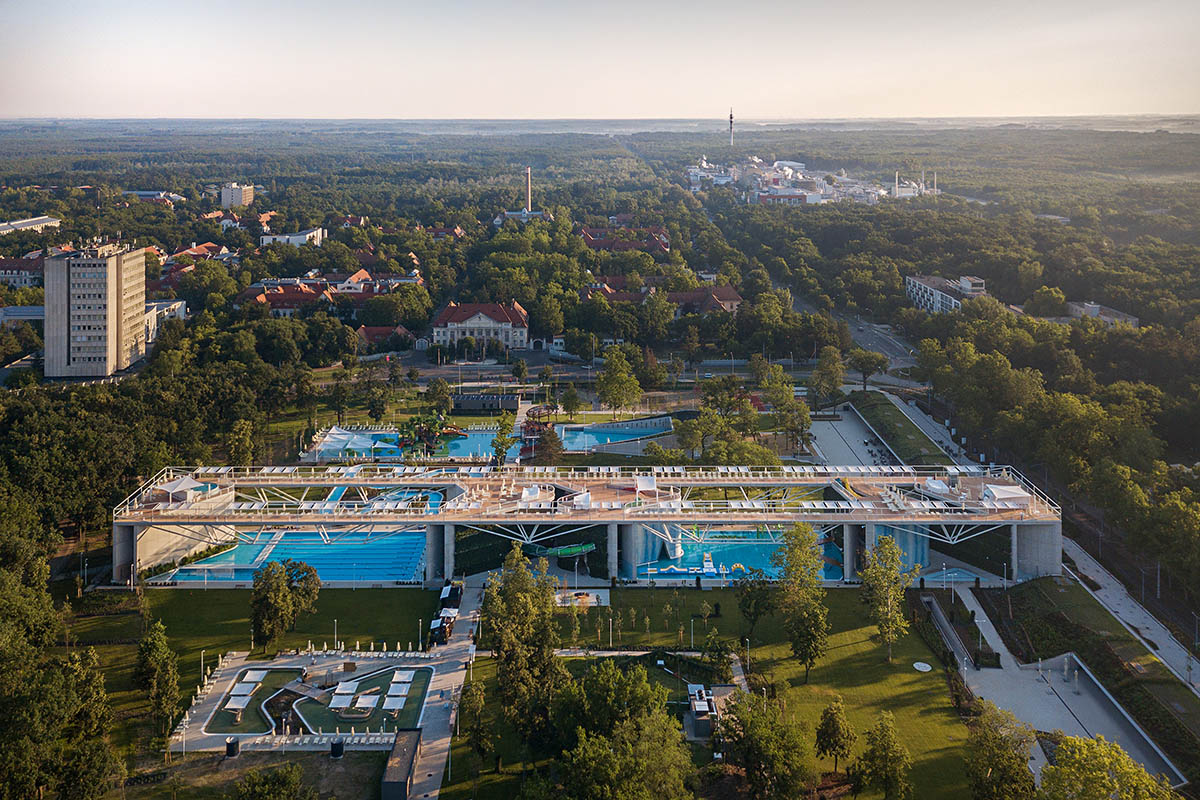 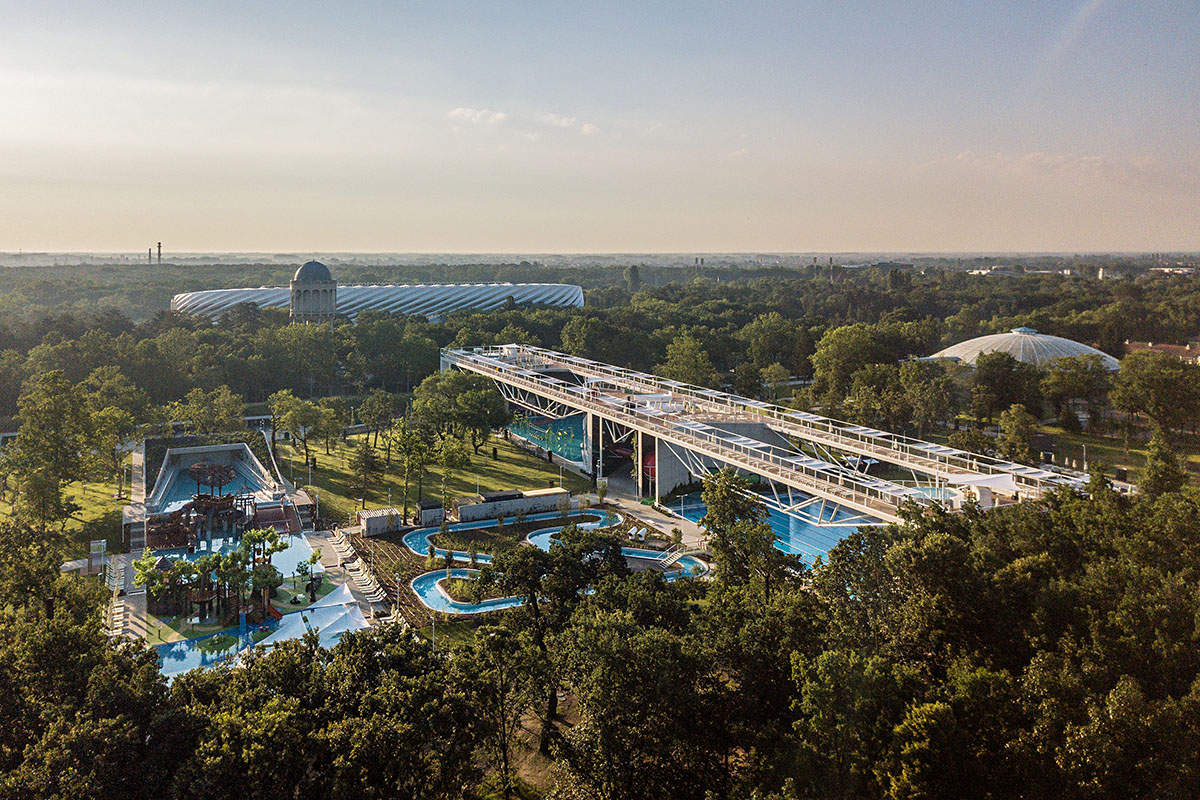 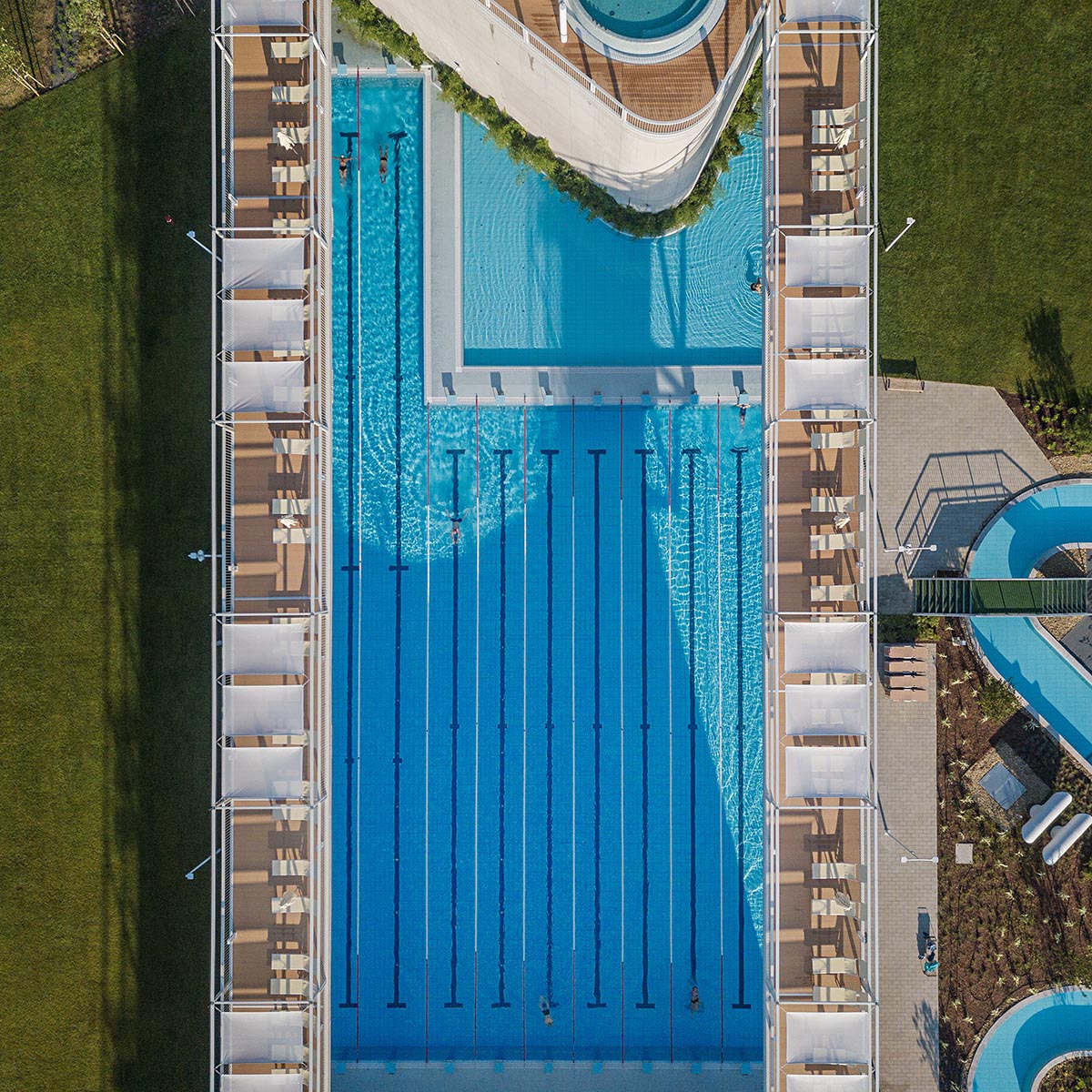 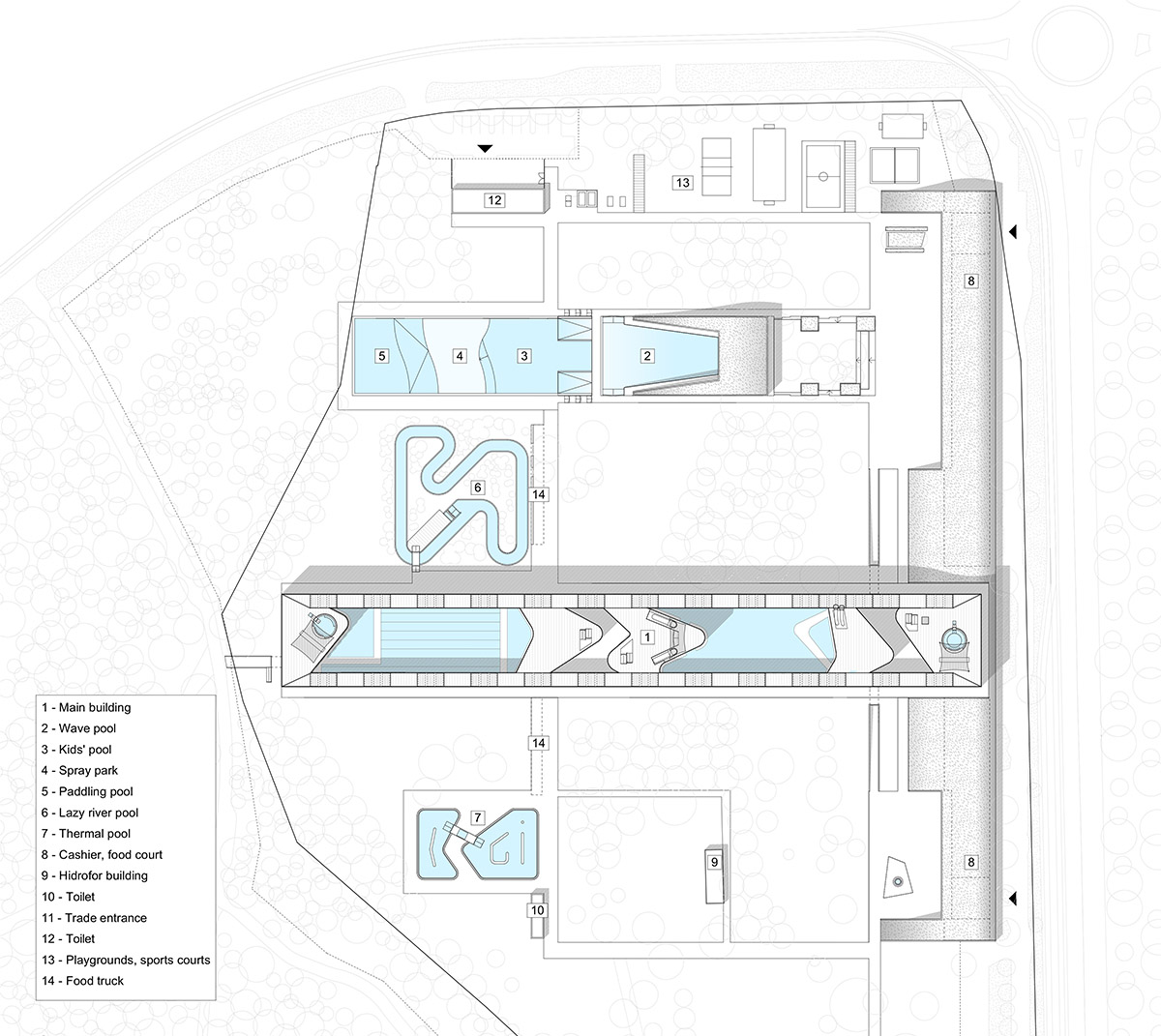