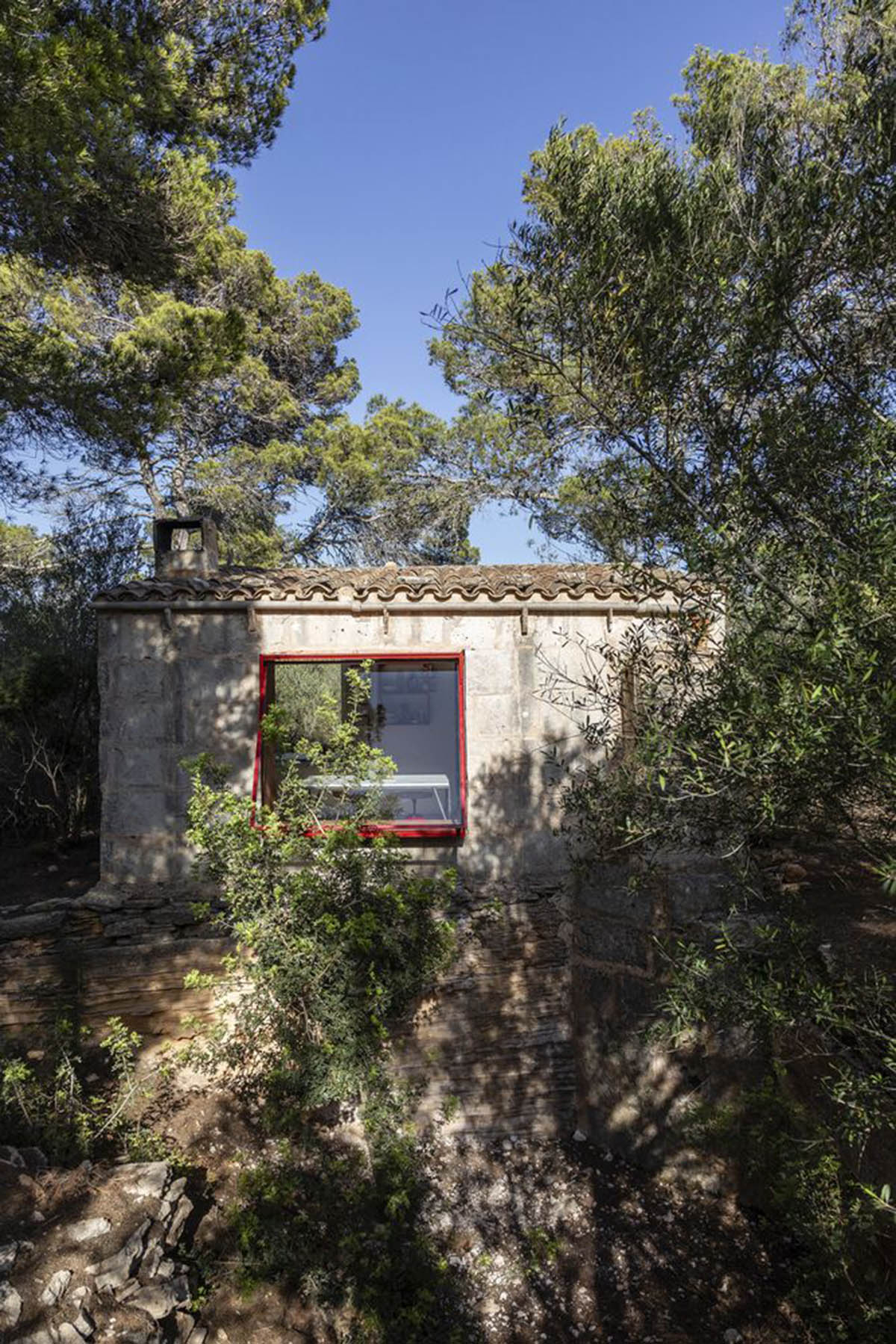 Multidisciplinary studio Mariana de Delás has converted a disused structure into a refuge retreat within a pine yard in rural Mallorca, Spain.

Named 12VoltRetreat Refuge, the tiny 15-square-metre space was redesigned as a case study project, aiming to renew a series of existing traditional sheds and shelters into temporary escape homes outside areas sited in rural Mallorca.

The small shelter was renewed with a bright red bow window that marks the structure from afar, while providing excessive light inside. However, the original materiality of the house, made of a local mares stone, are still preserved to give its authenticity. 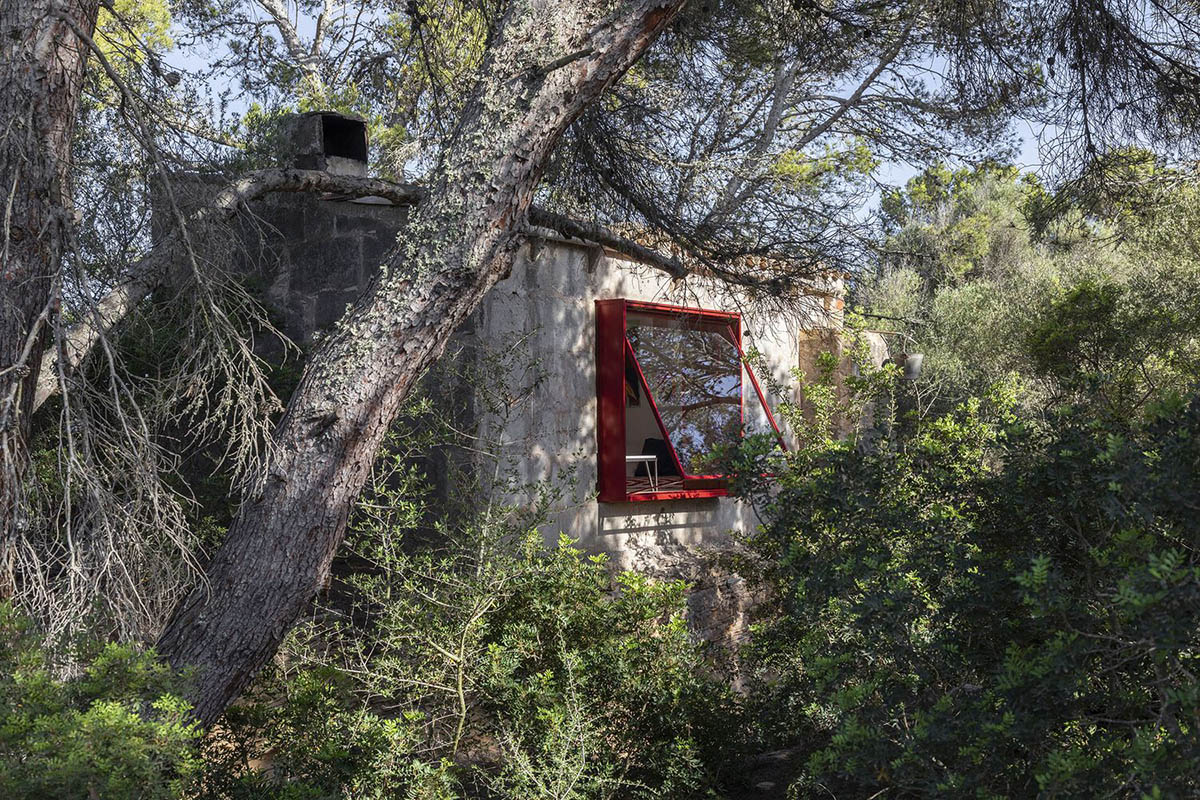 "Throughout the island’s agricultural fields these traditional stone shelters were built to act as refuges (to take cover and or/rest) for hunters and shepherds and also act as storage units for labor tools," said Mariana de Delás.

"The simple local mares stone construction walls and the light ceramic + tile roofing plus the small size footprint they occupy,( they range from 5 to 20 sq meters) make them very recognizable across the island." 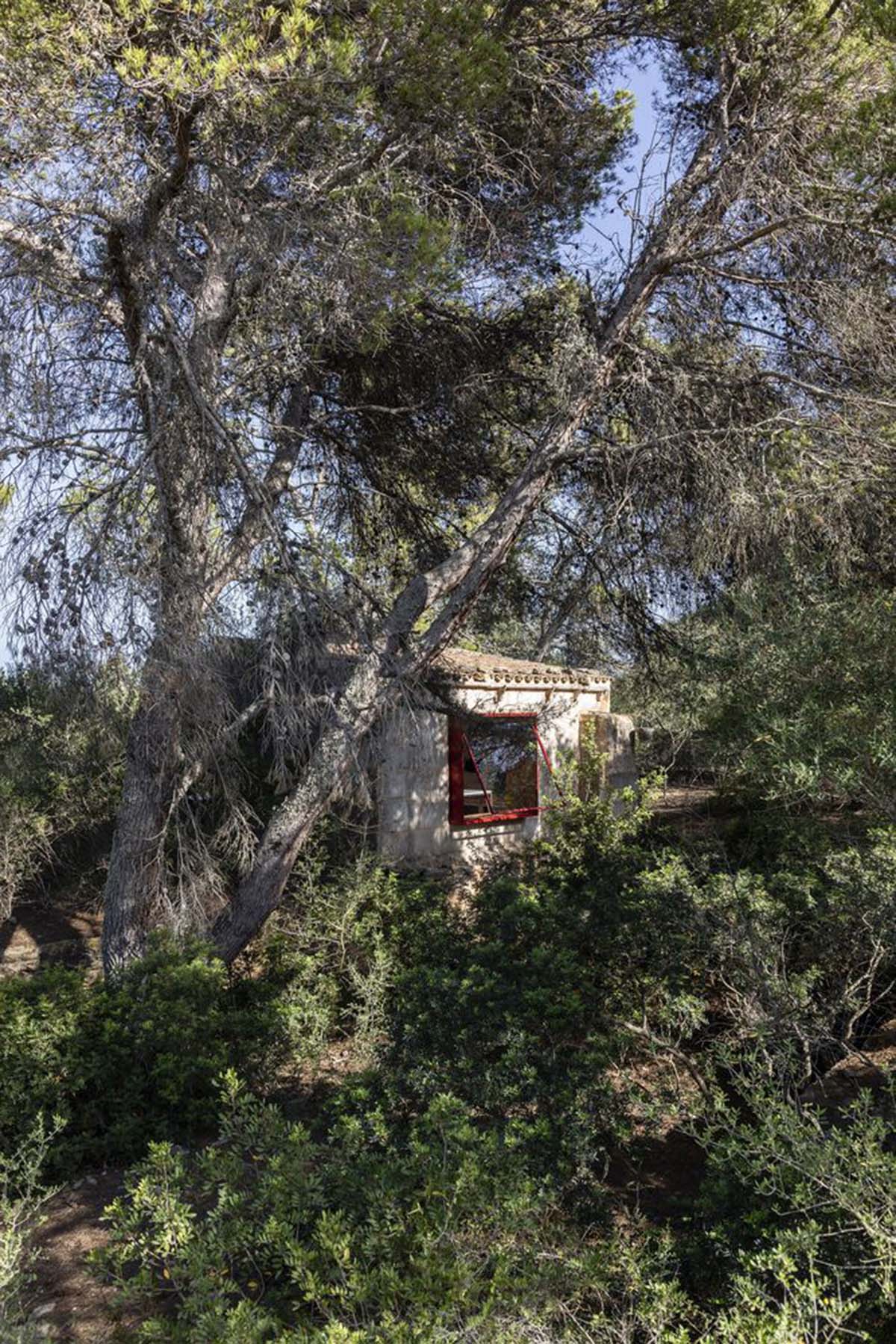 According to the studio, "currently, many of them are in disuse but still keep the outside enveloping structure intact, with the added value that most of them are sited in idyllic locations." 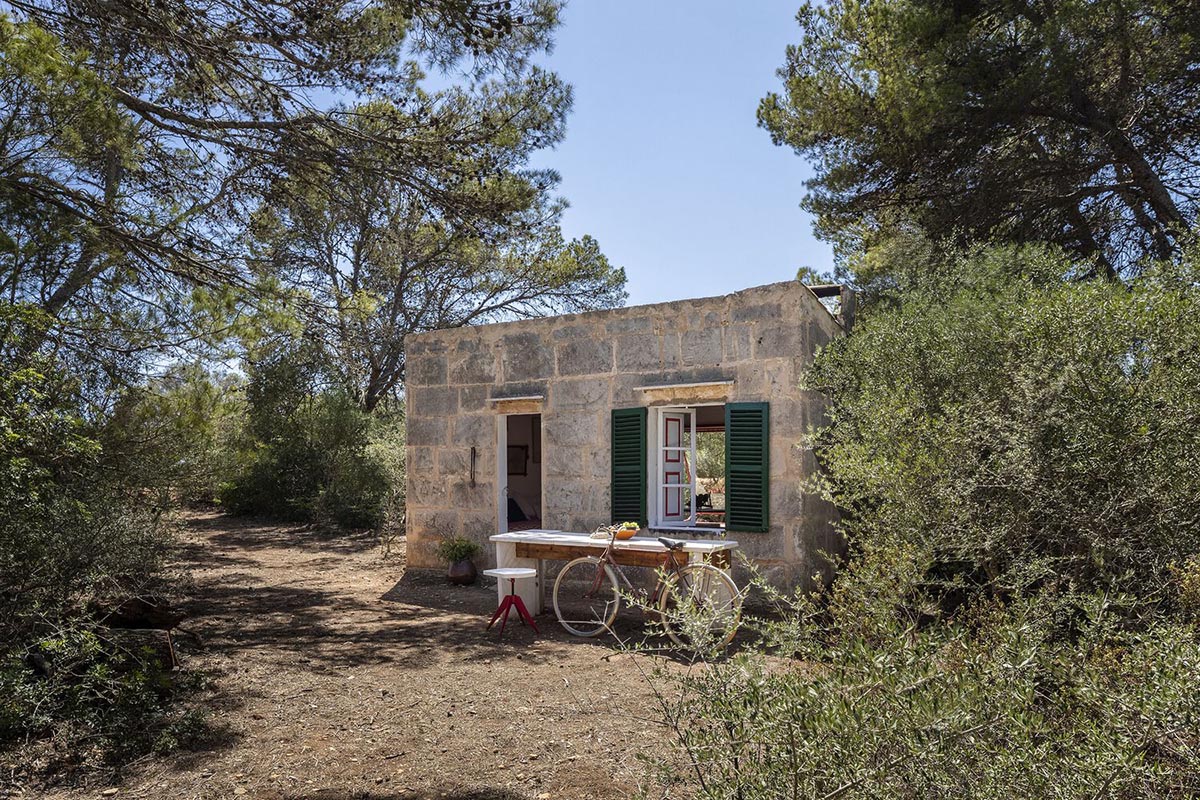 The main goal of the project was to "recuperate and emphasize" the existing structure while optimizing the interior space by receiving more light, views and create furnitures that have a double use and enlarge the space.

In design, the architects' aim was to create a striking architectural intervention on the façade and they added a bright red bow window that opens into the old quarry. The red-colored window also serves as a seating element for the inside and generates cross ventilation when open. 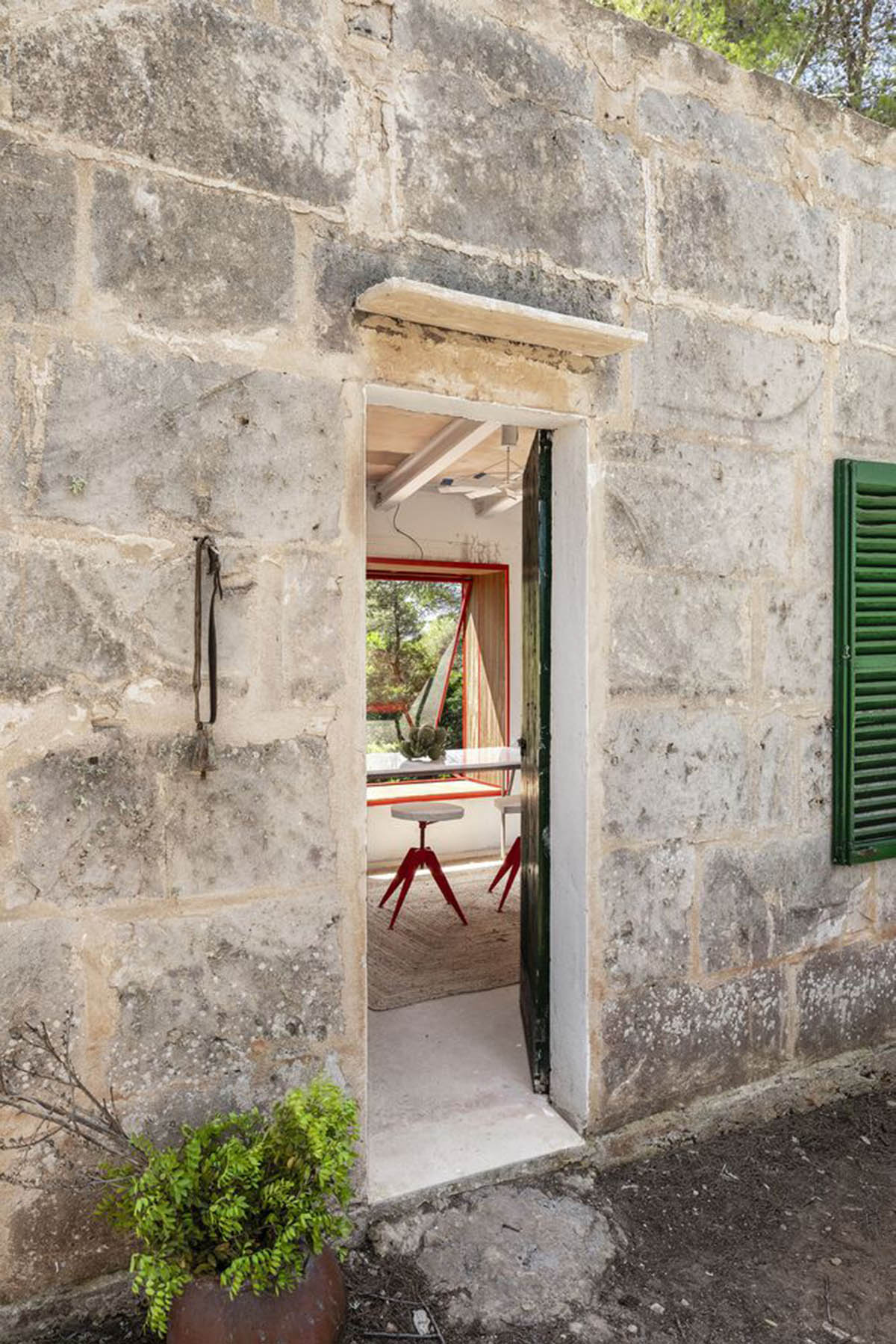 "The new opening frames the landscape from both inside and outside creating the connection between the interior and the exterior that was missing," added the firm.

"This bow window is devised thought and executed conjointly with a local 2monos studio. With them, the challenge and exploration were to build it with the thinnest metal profiles possible and to generate an opening mechanism that was easy, elegant, and functional." 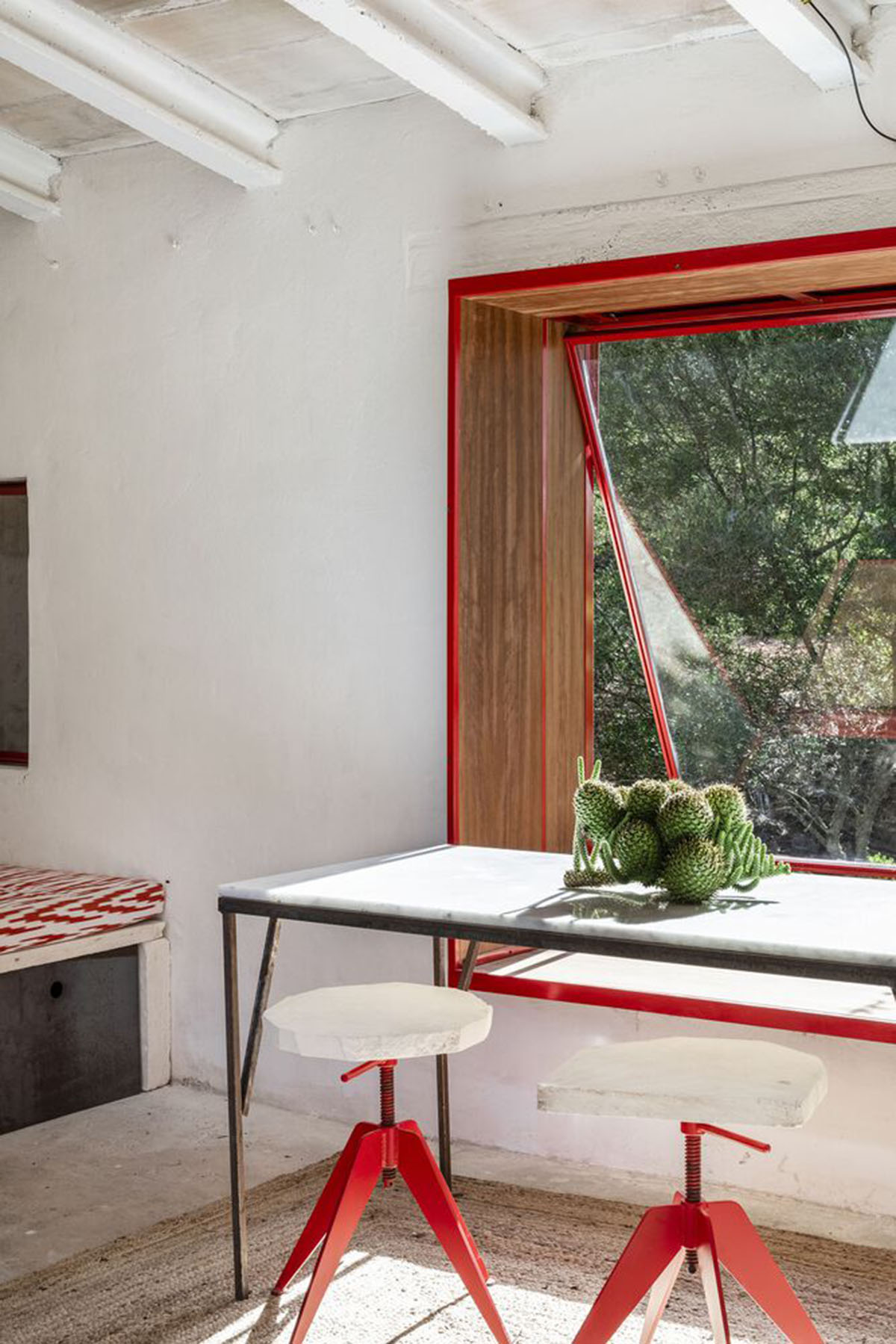 Inside, all of the interventions and furniture pieces have been customized by the team to explore, learn and perfect the use of different materials and options.

Benches, tables, and stools were made by ensembling in different positions the traditional 80cmx40cm mares piece, reusing the characteristically traditional facade element into the inside. Taking the self-building and exploration philosophy to the core of design, the team also designed facilities within the retreat in a way that works independently to the space they serve and can be carried out by any individual. "These MEP devices are envisioned to work on 12V to ensure fire/hazard safety (as the surroundings are very dry) and to promote a less energy consumption lifestyle plus motivating the exploration of battery portability and electronic experimentation," the studio continued.

"The solar wheelbarrow intends to optimize the charging to the position of the sun whilst acting as a morning ritual to charge the inside power banks and batteries."

"All inside electrical components are made with small batteries so that they are portable and can be charged from the power banks that are charged at the solar wheelbarrow," added the architects. 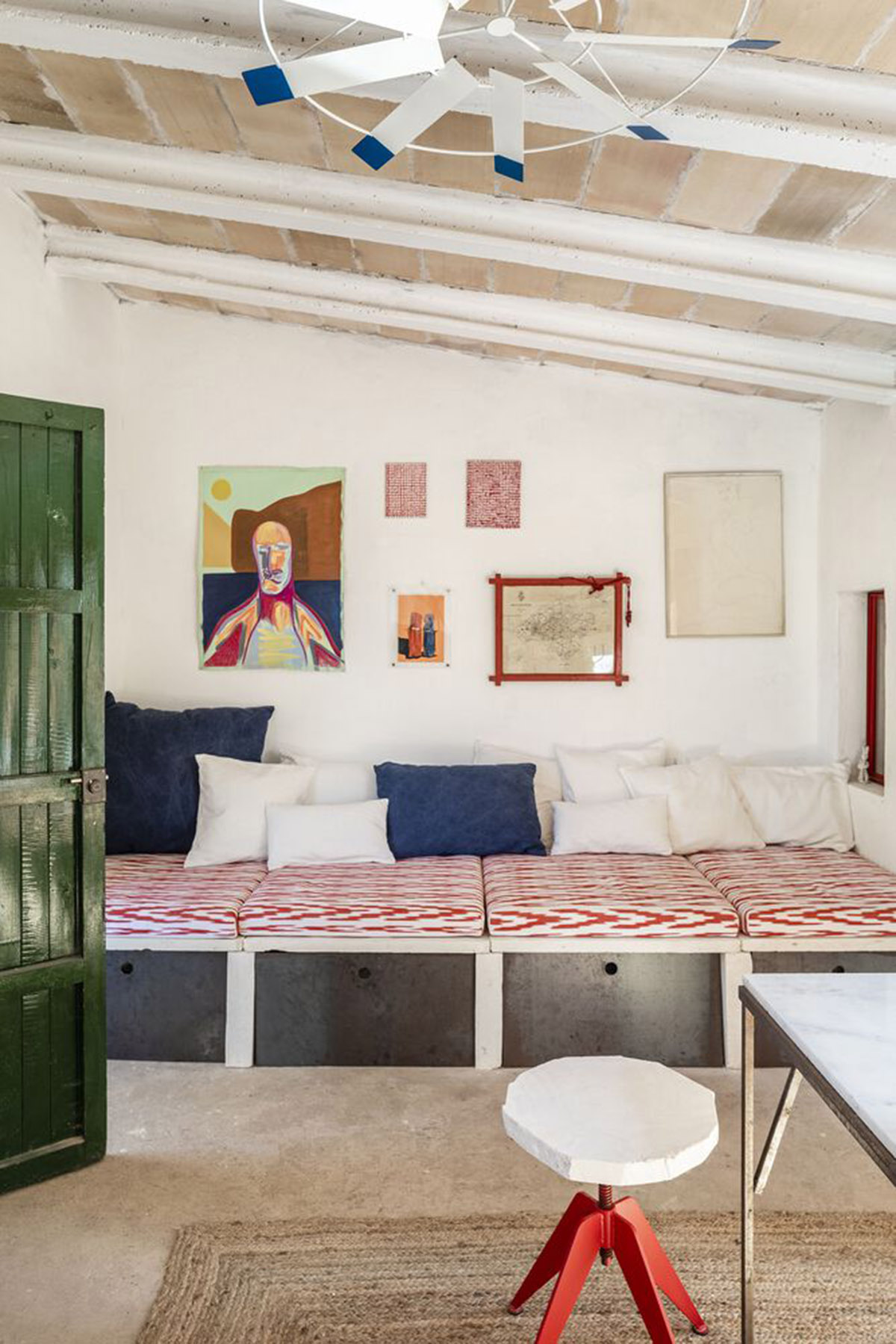 By using lights and fans that are made with 9v rechargeable batteries, they can easily be changed by using the sun. The team also added a bigger power bank and some electrical scooter 12volt batteries to be able to charge laptops, the water pump, and other heavier load components.

Since this refuge retreat is situated in the middle of a pine yard, which was previously not receiving excessive sunlight, the team devised a new concept for mobile facilities: a solar wheelbarrow was invented. 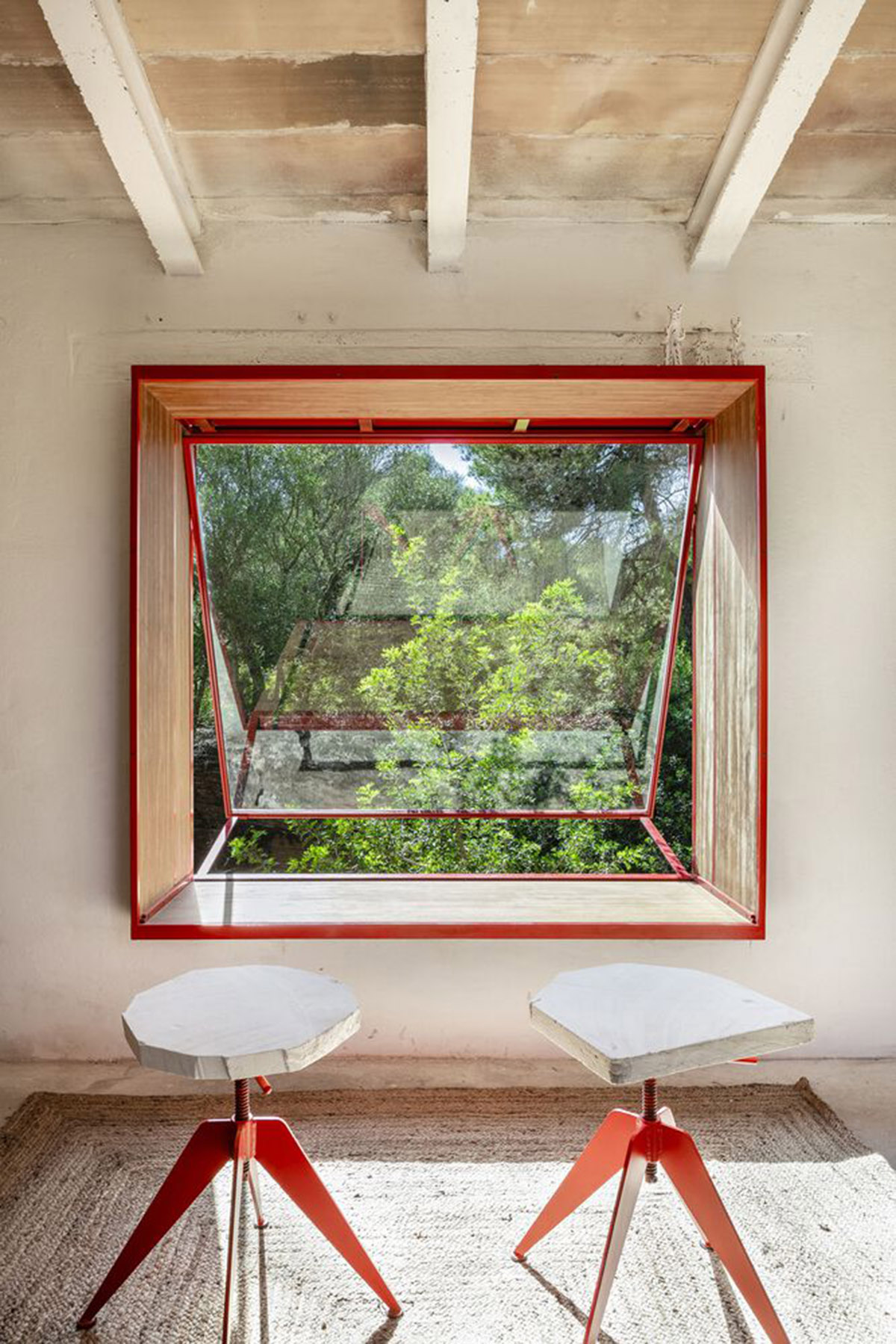 The architects said that "the solar wheelbarrow serves as a prototype and emblem of the beginning of future mobile charging stations that epitomize the future of mobile living."

"Once high-capacity batteries become lighter, the power grid and installations can travel with the user and not be fixed into the architecture, making and creating a new revolution of nomad living, where energy is portable and is disassociated with the space its serves."

"The rise of opening comfort and the new ways of living and working to a wider range of spaces that self generate their consumption and enhancing the window to easier mobile living (such as vans) or to the creation/renewing of temporary living refuges that will help us breathe from the bustling and fast-life urban centers," they added. 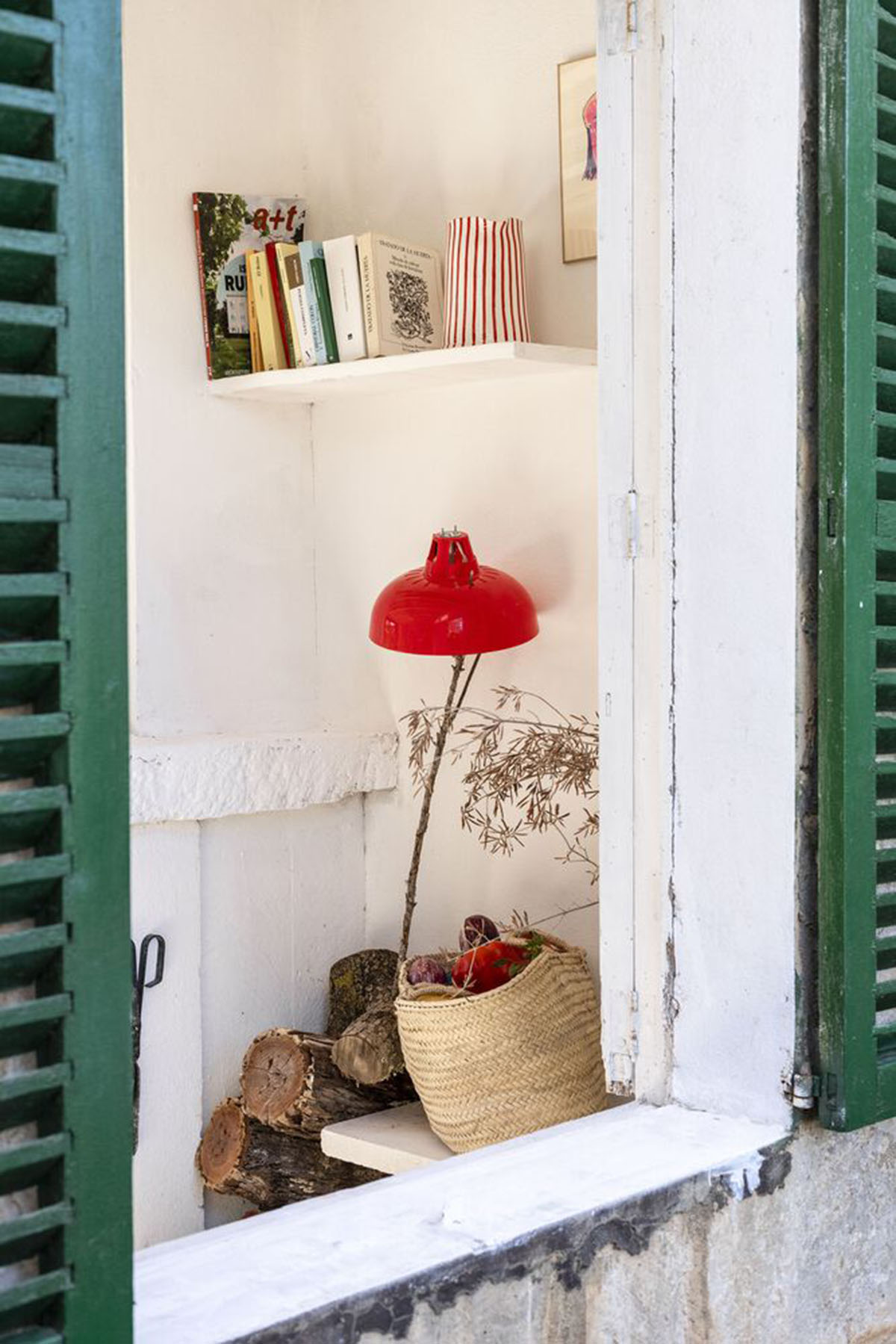 Mariana de Delás is a multidisciplinary studio that focuses on the realisation of projects that have an idealistic, fun and artistic approach to architecture. Mariana de Delás has offices in Barcelona, Madrid and Palma de Mallorca. 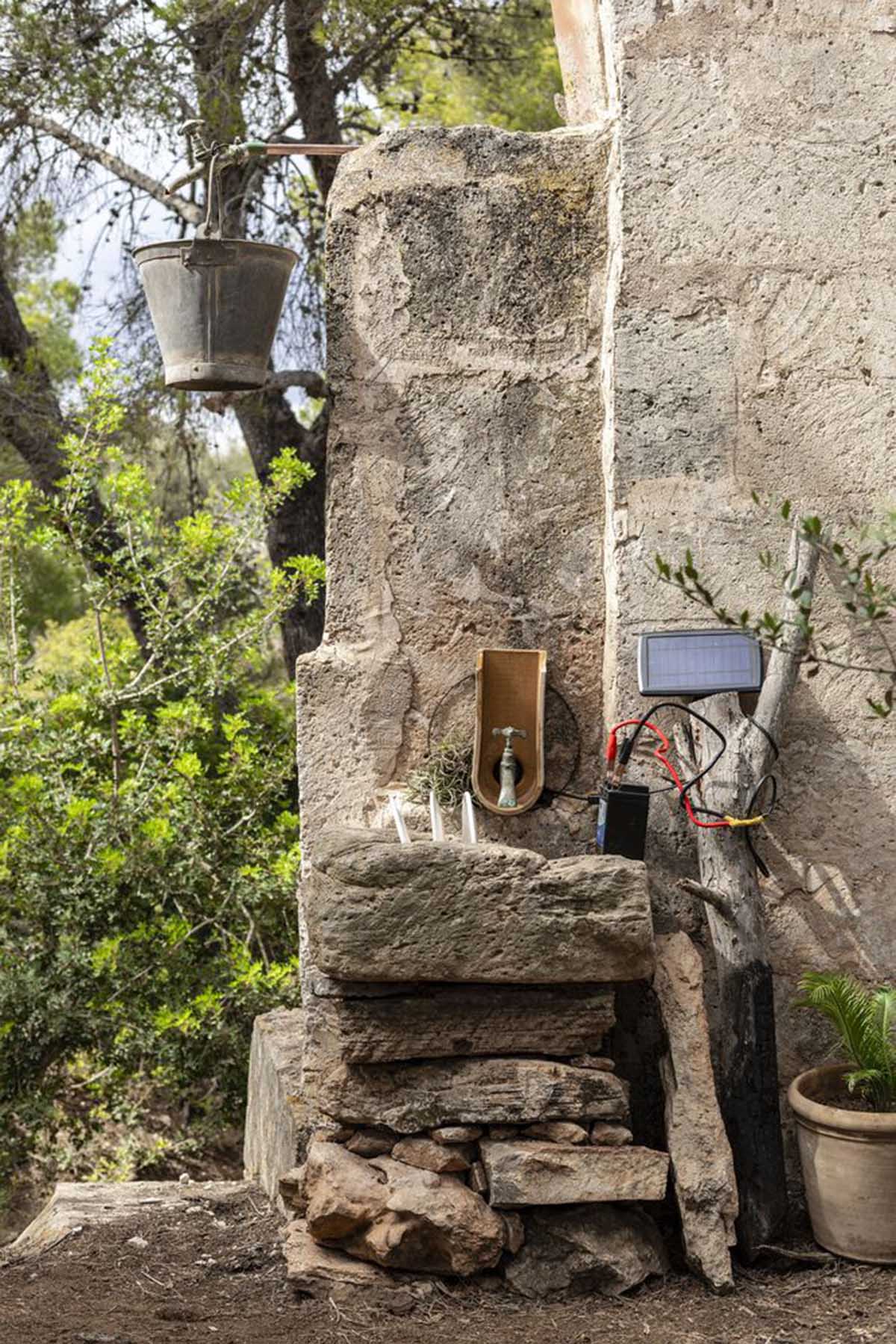 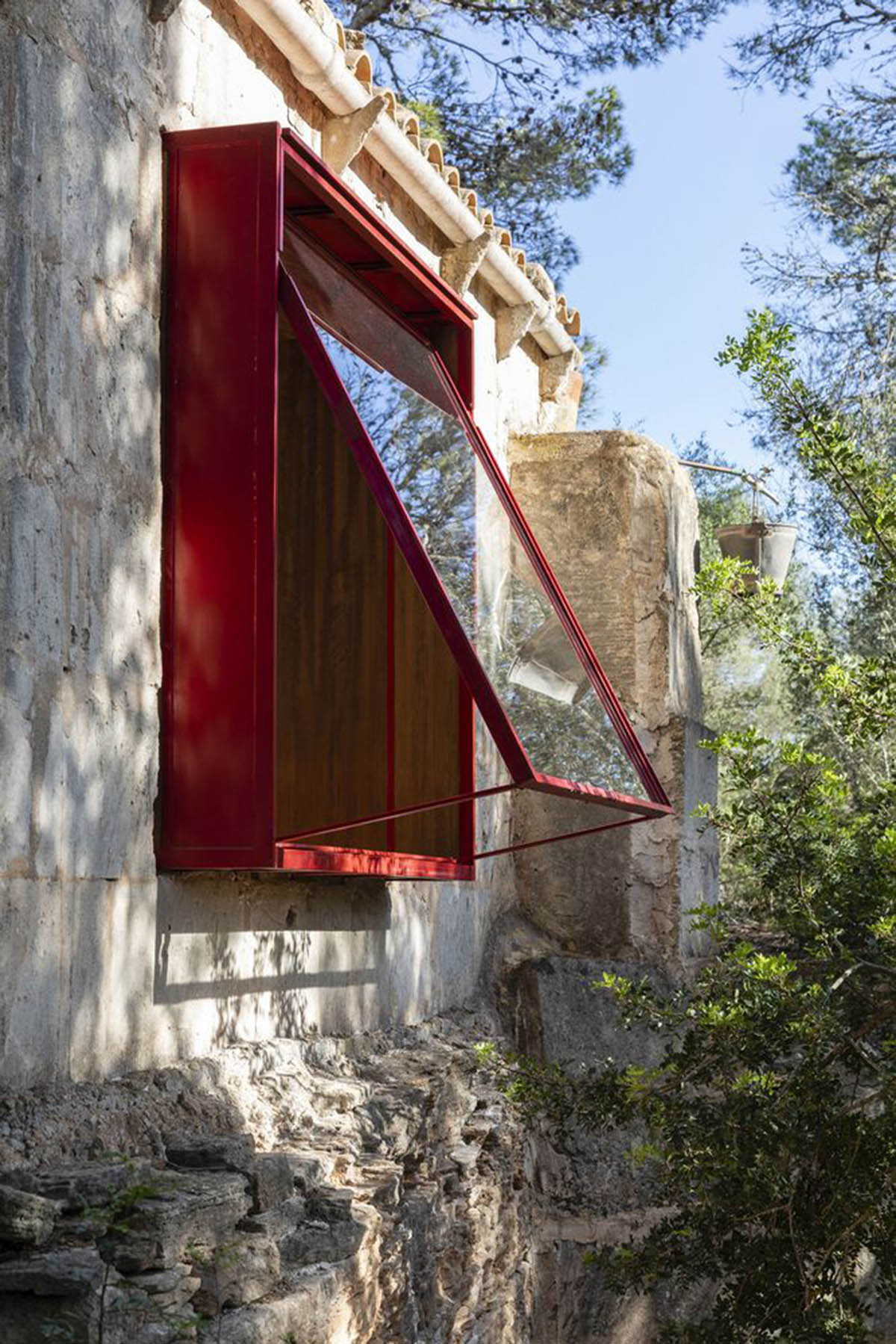 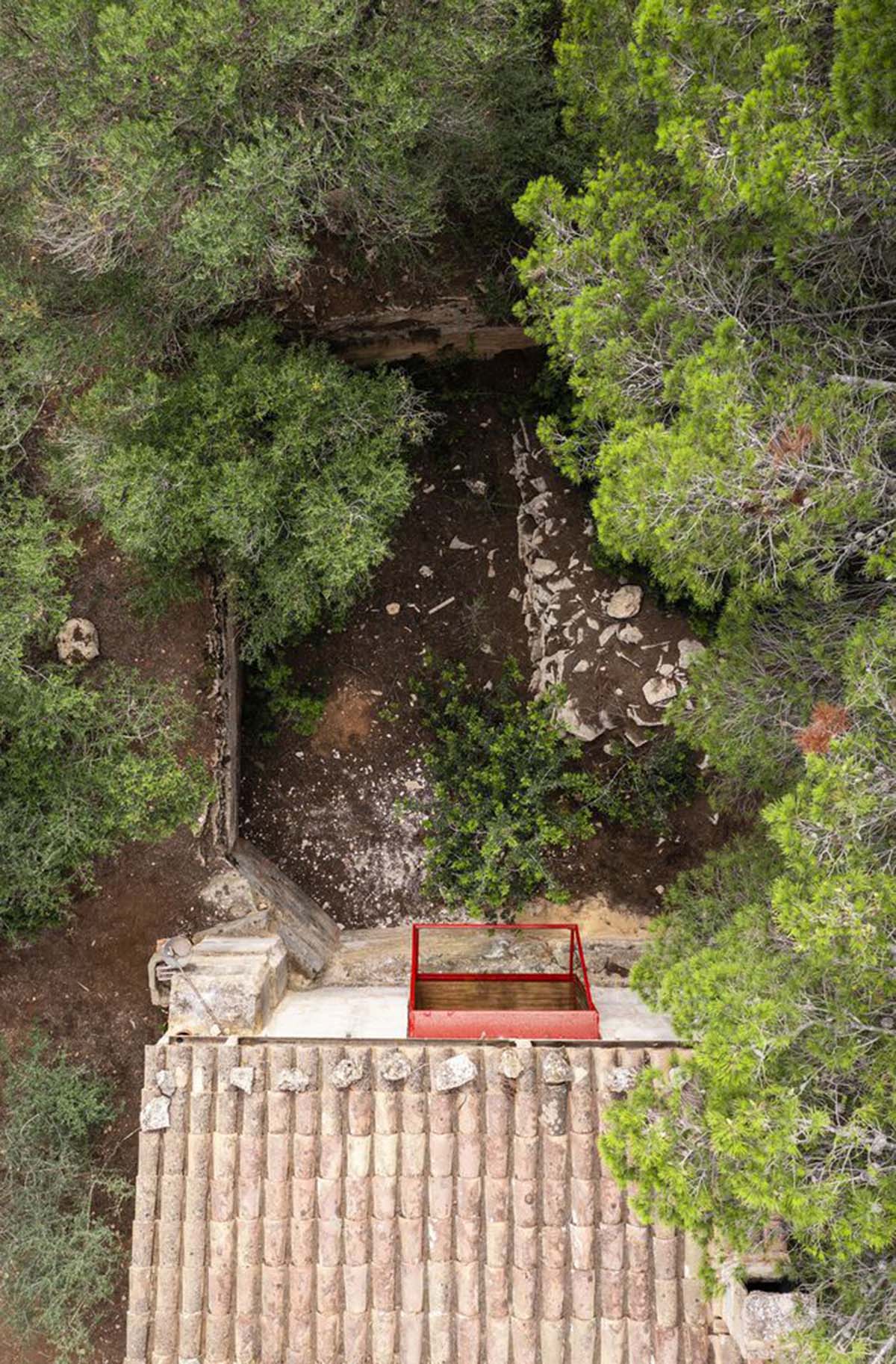 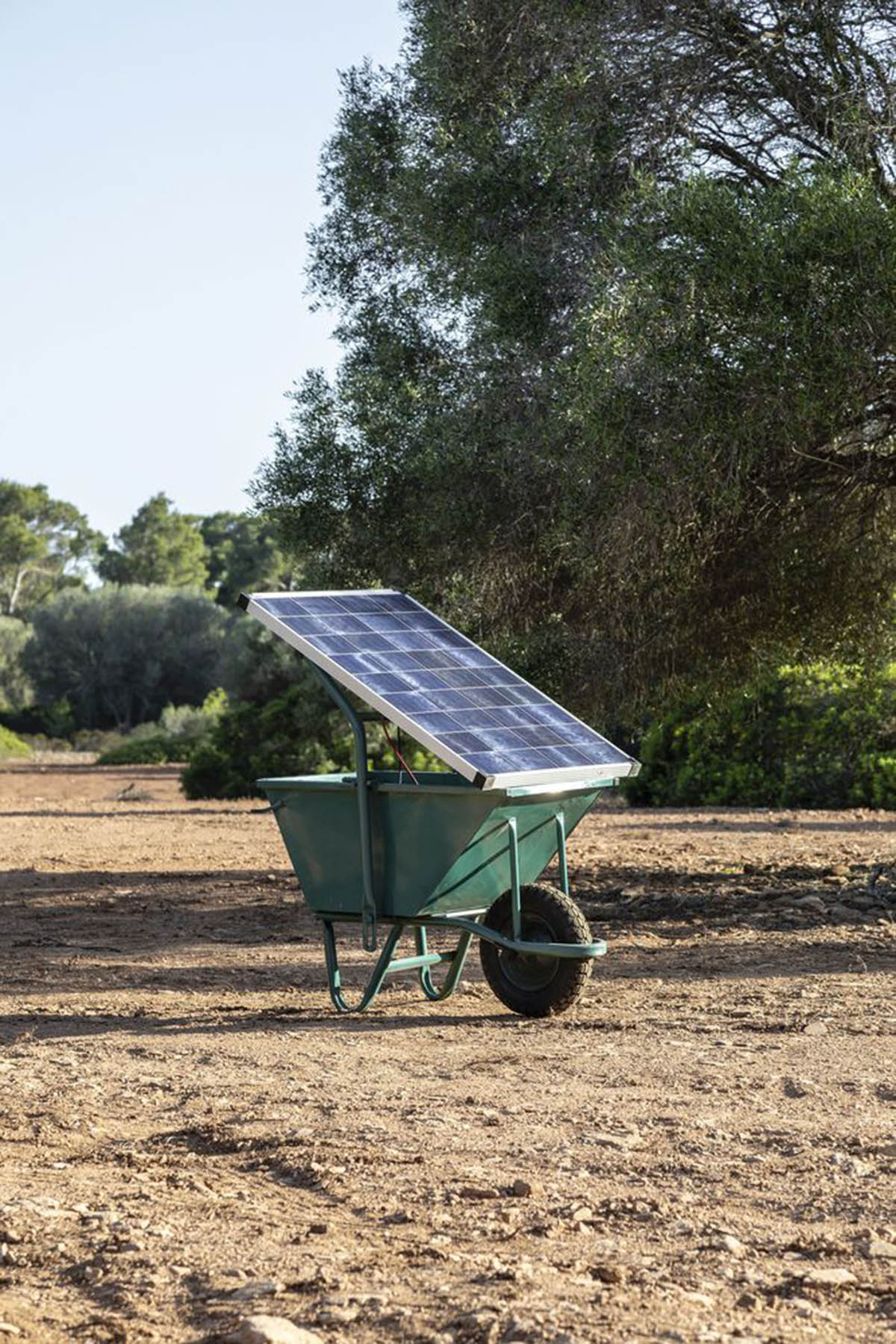 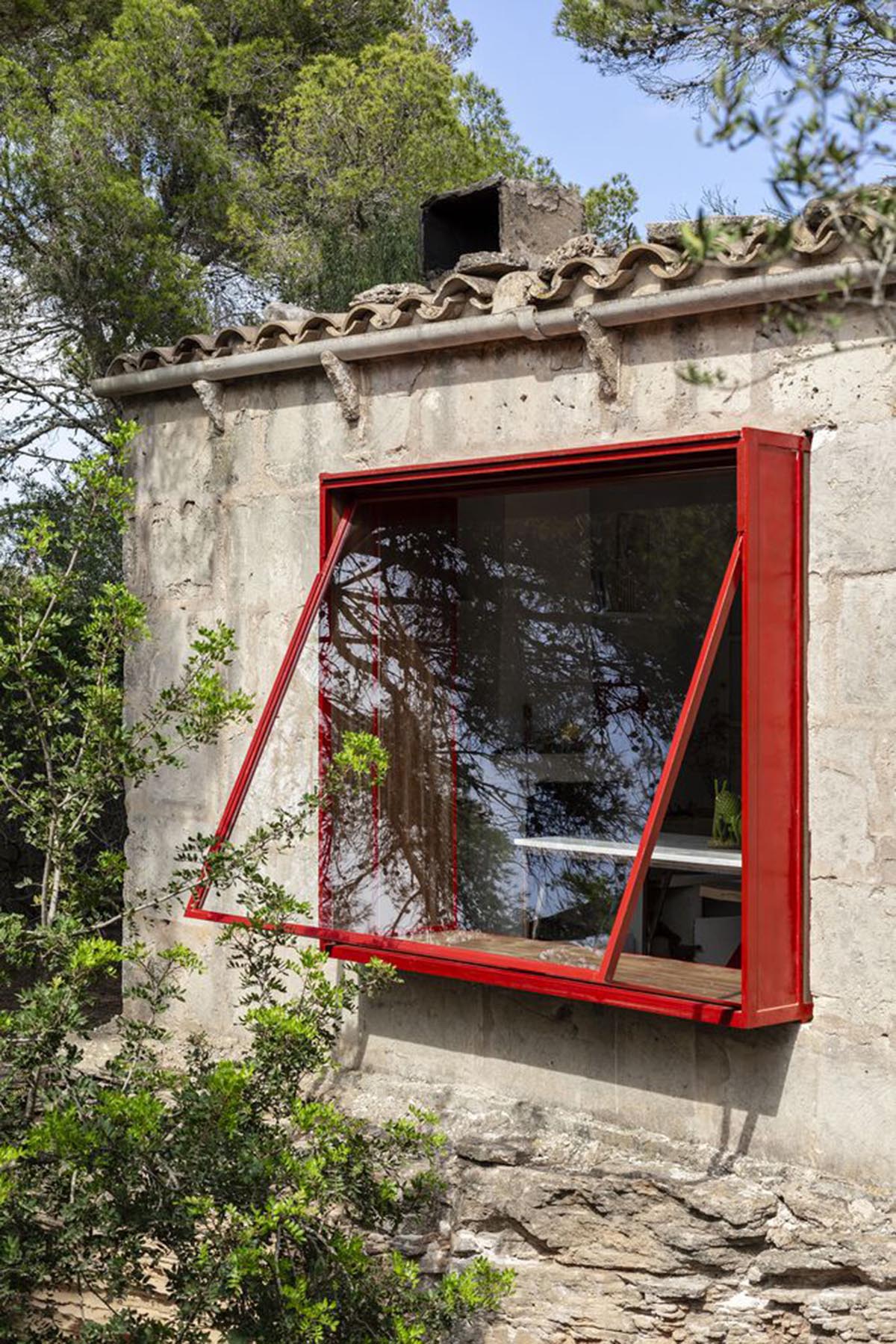 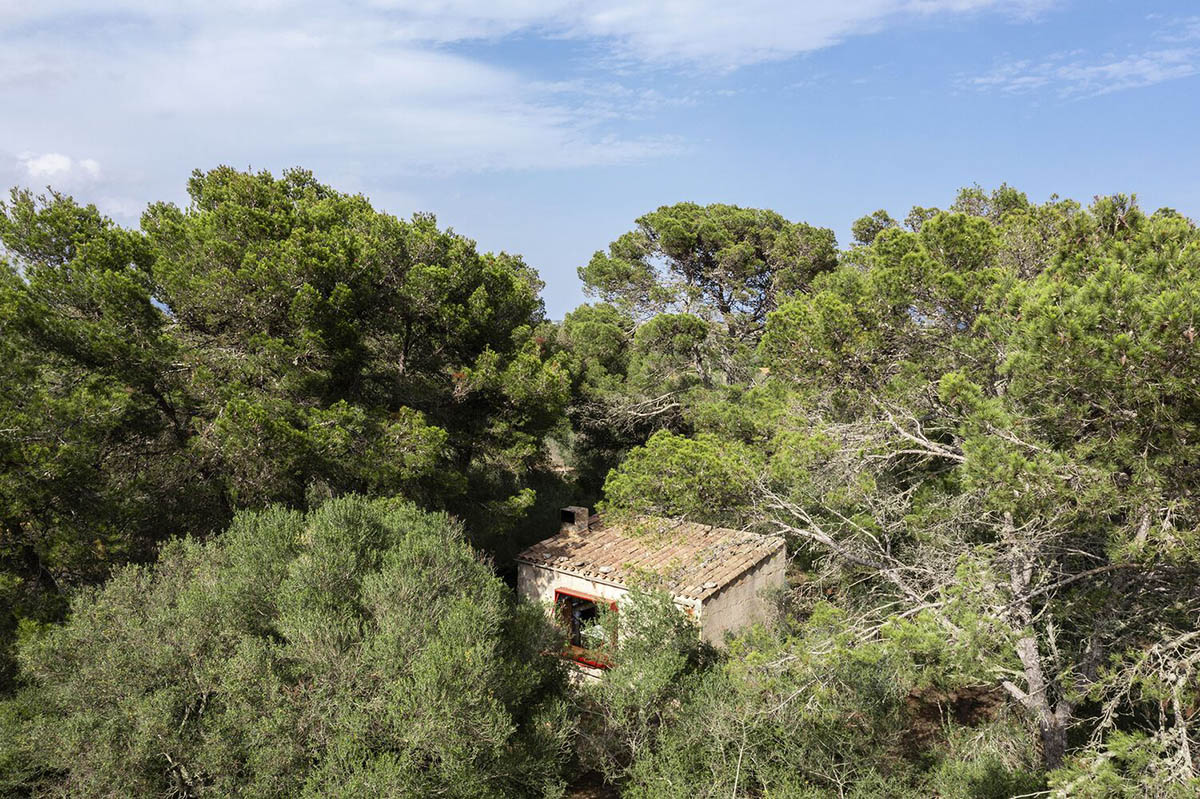 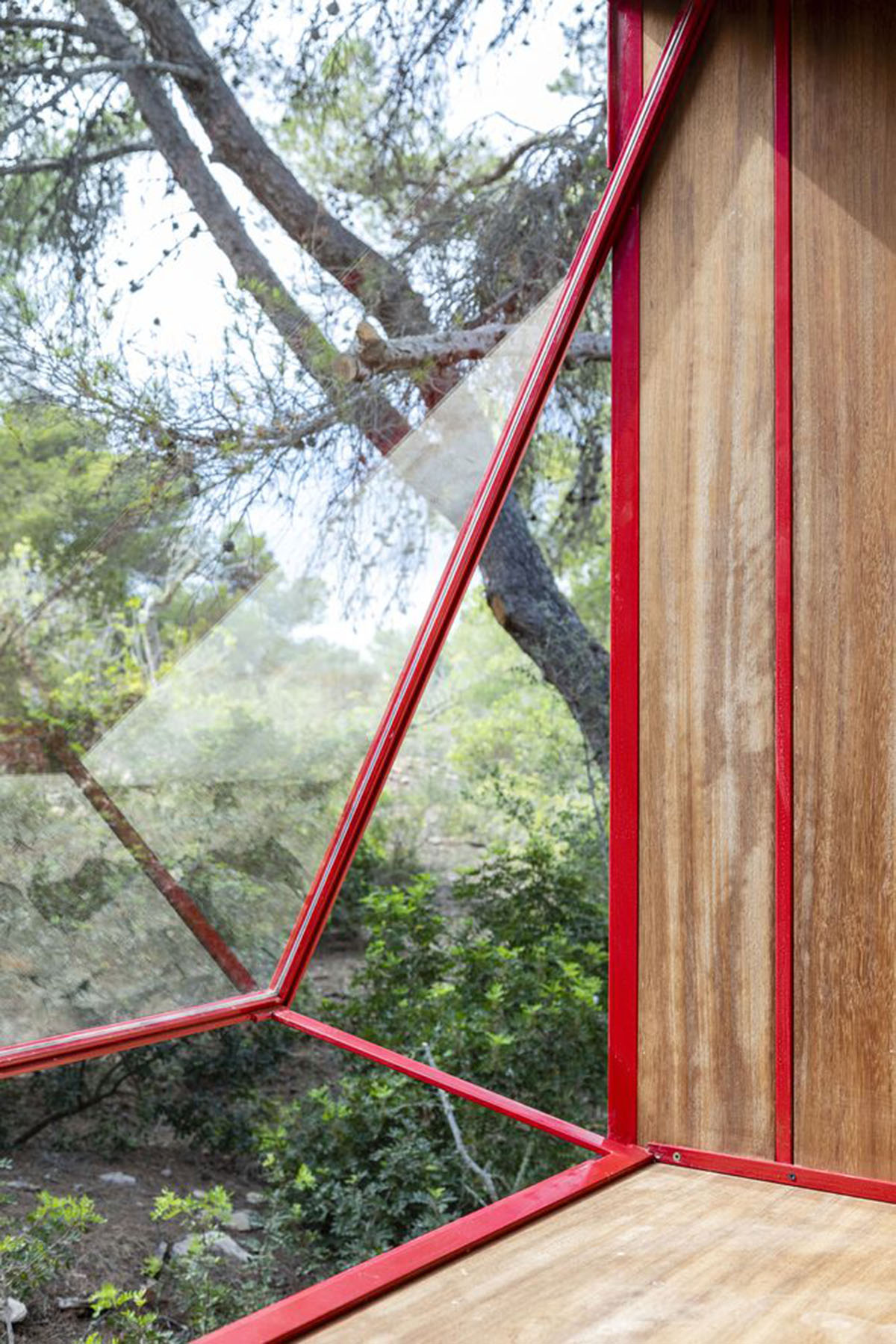 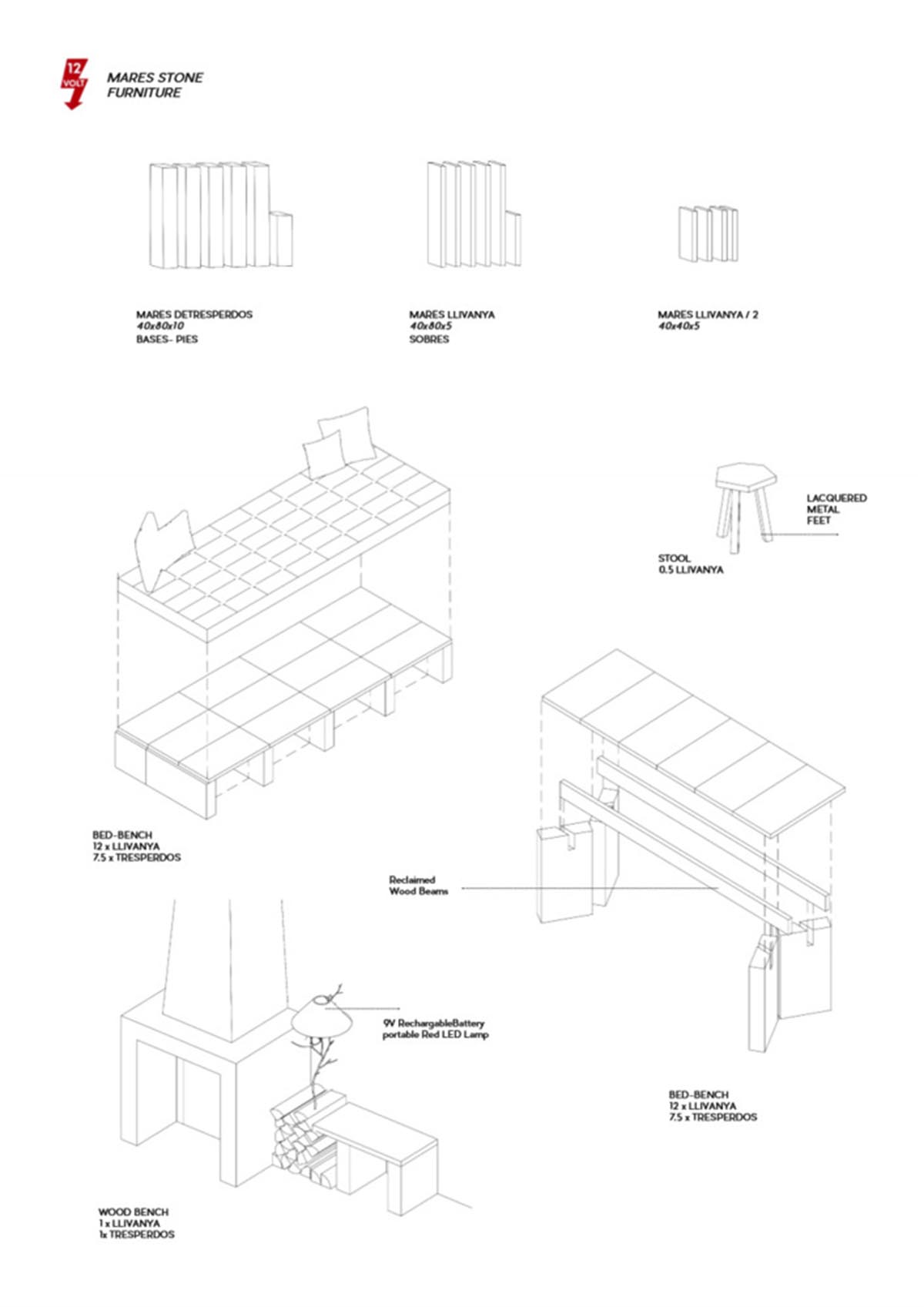 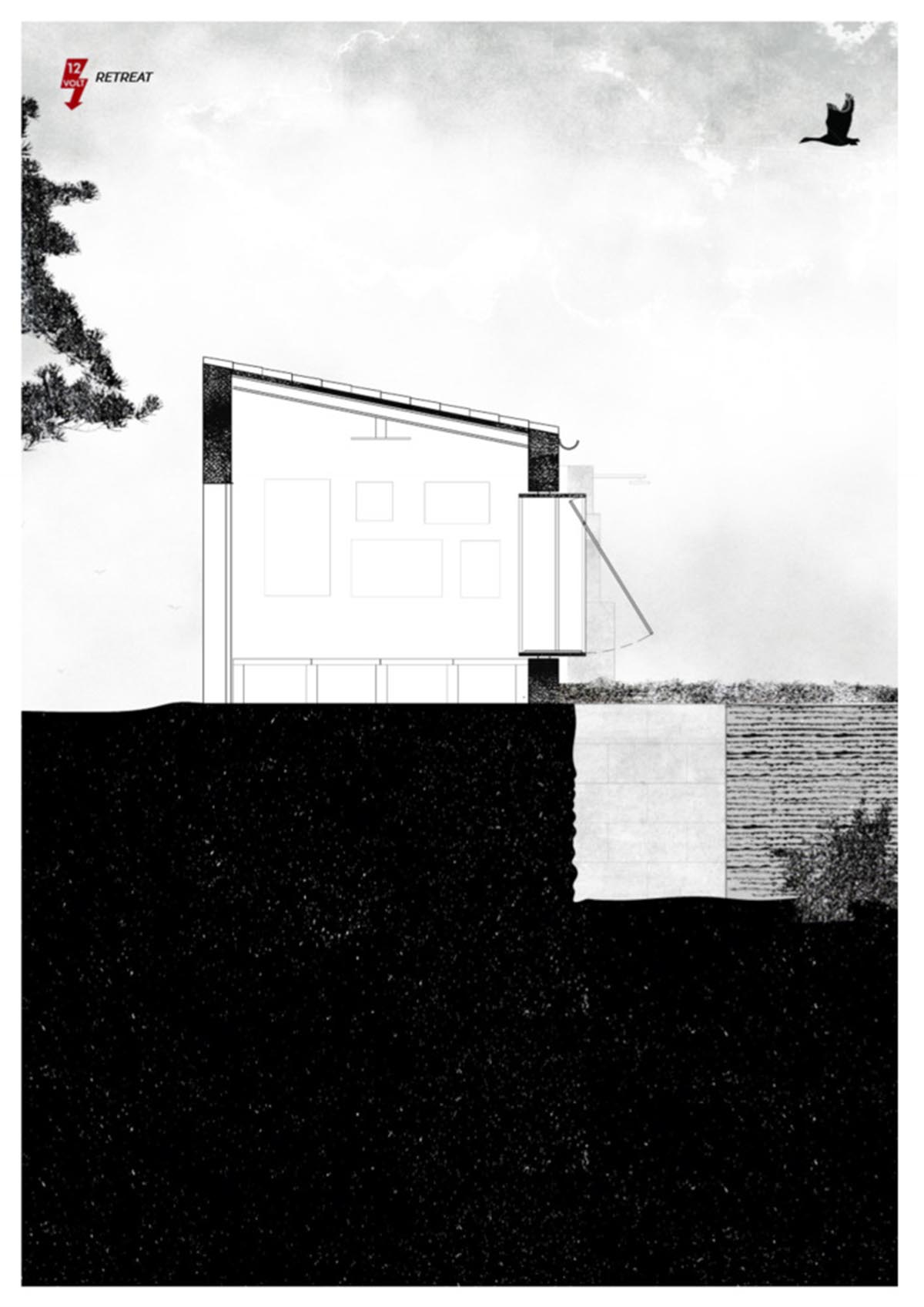 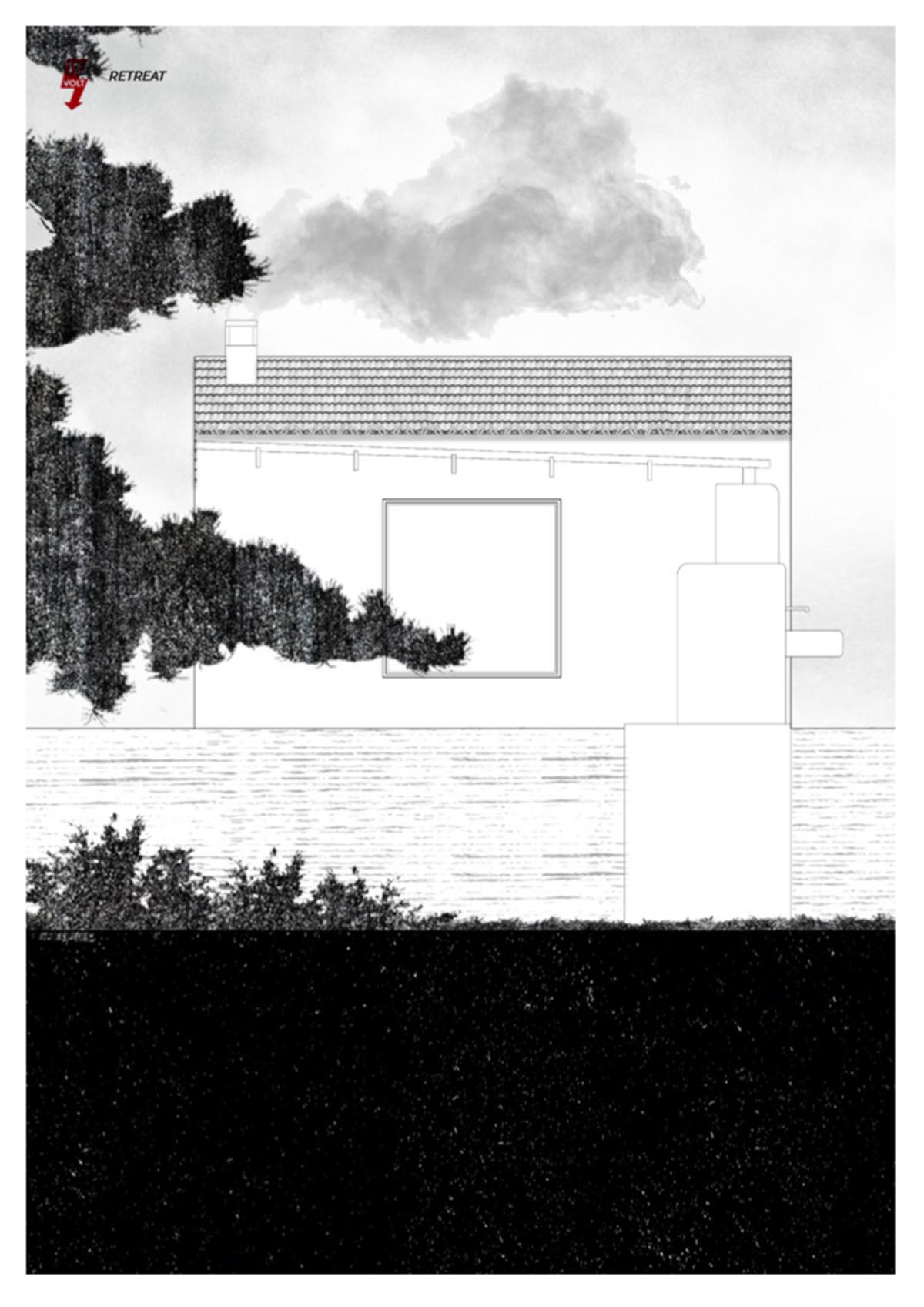 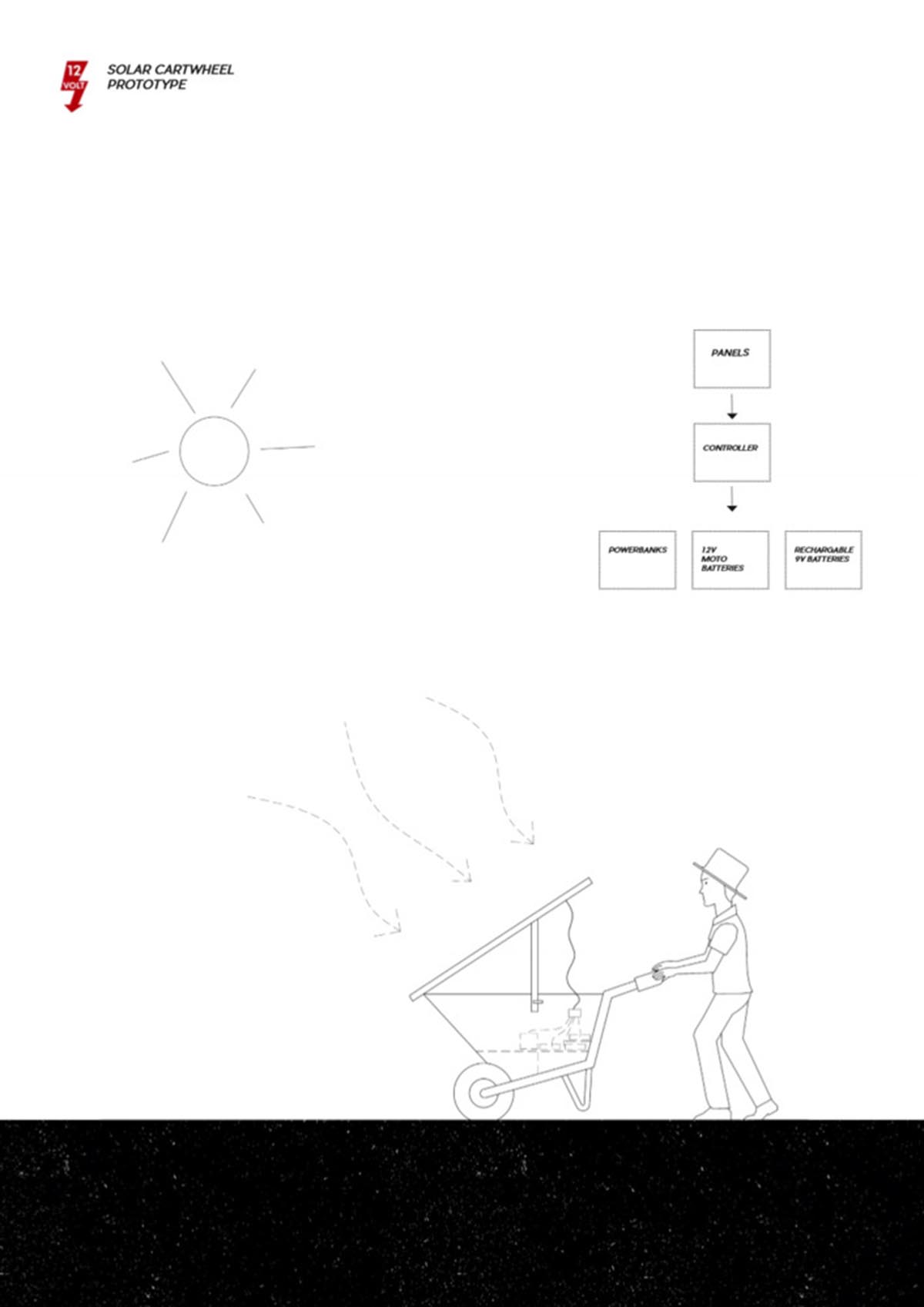