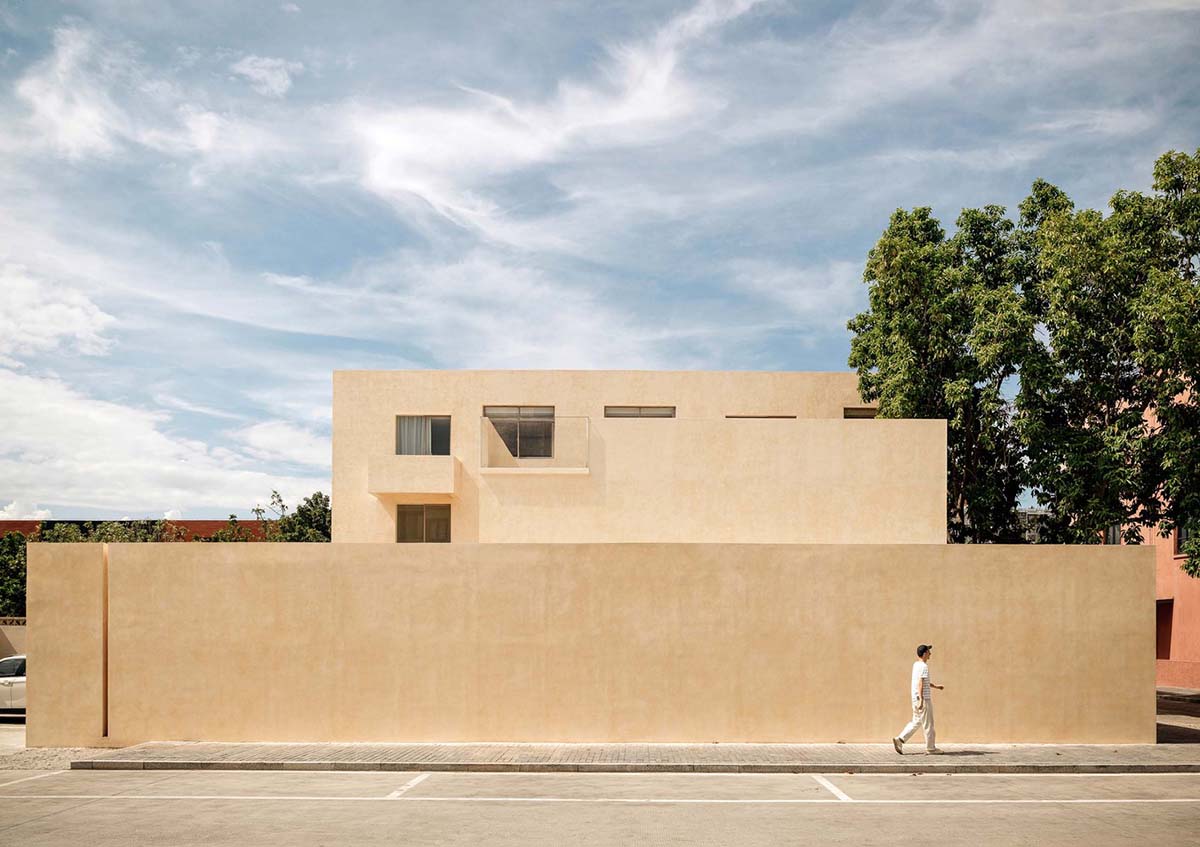 Shanghai-based architecture studio TEAM_BLDG has transformed a public bath into a new studio and exhibition space of Buddha artist Jiang Sheng, the building is made of pure ladder-like volumes painted with sandalwood yellow.

Named The Field, the 842-square-metre building is located in Huli District, Xiamen City, at the former site of an aluminum factory, the building was originally a public bath of the factory. However, in 2019, it was partially renovated after the aluminum factory was transformed into a creative office park with multiple businesses.

TEAM_BLDG was commissioned to transform the former public bath into a new studio and exhibition space of Buddha artist Jiang Sheng. 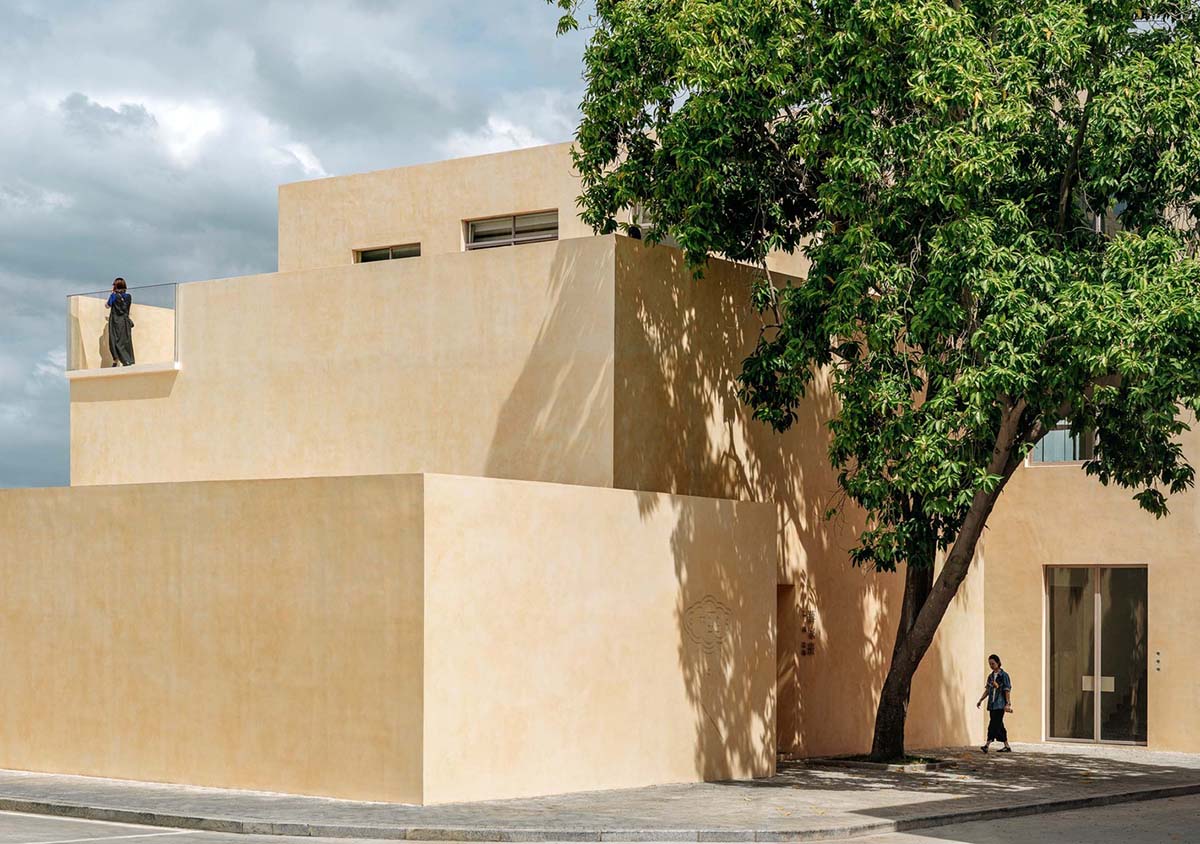 As the architects explained, the project was not intended to be an isolated pure land. The owner hoped to separate the concept of "isolated and unreachable" and create an appealing spiritual place.

According to the architects, it was "a big challenge" to create the intangible perception with the interaction between the tangible Buddha statues and the building. 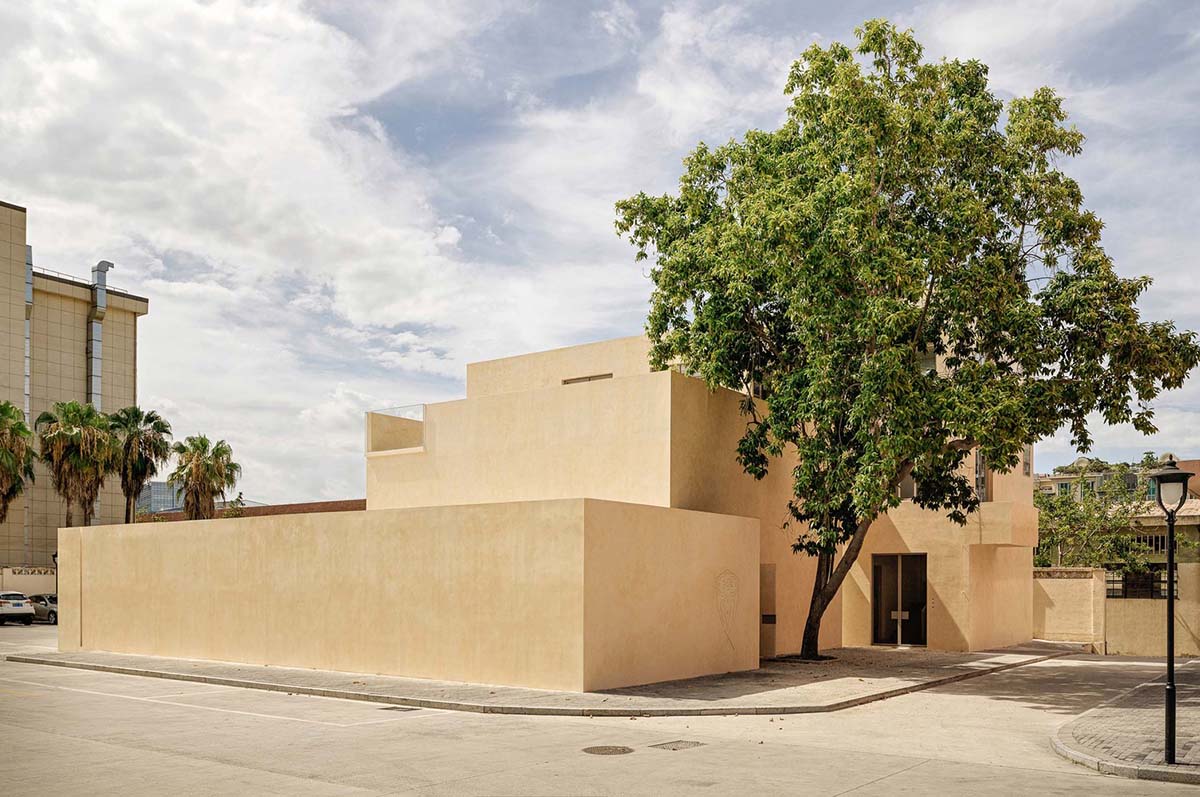 As a result of initial meetings, the architecture language of the building should be a hidden and even invisible architecture. The building acts as an intermedium to carry the Buddha statues and contain the essence of Buddhism, to be a "residence" for Buddha in the earth.

While the form of the old building is still pure and visible, it has three volumes, piling up ladder-like from south to north. According to the number of storeys, the three volumes are named as Building 1, 2 and 3. 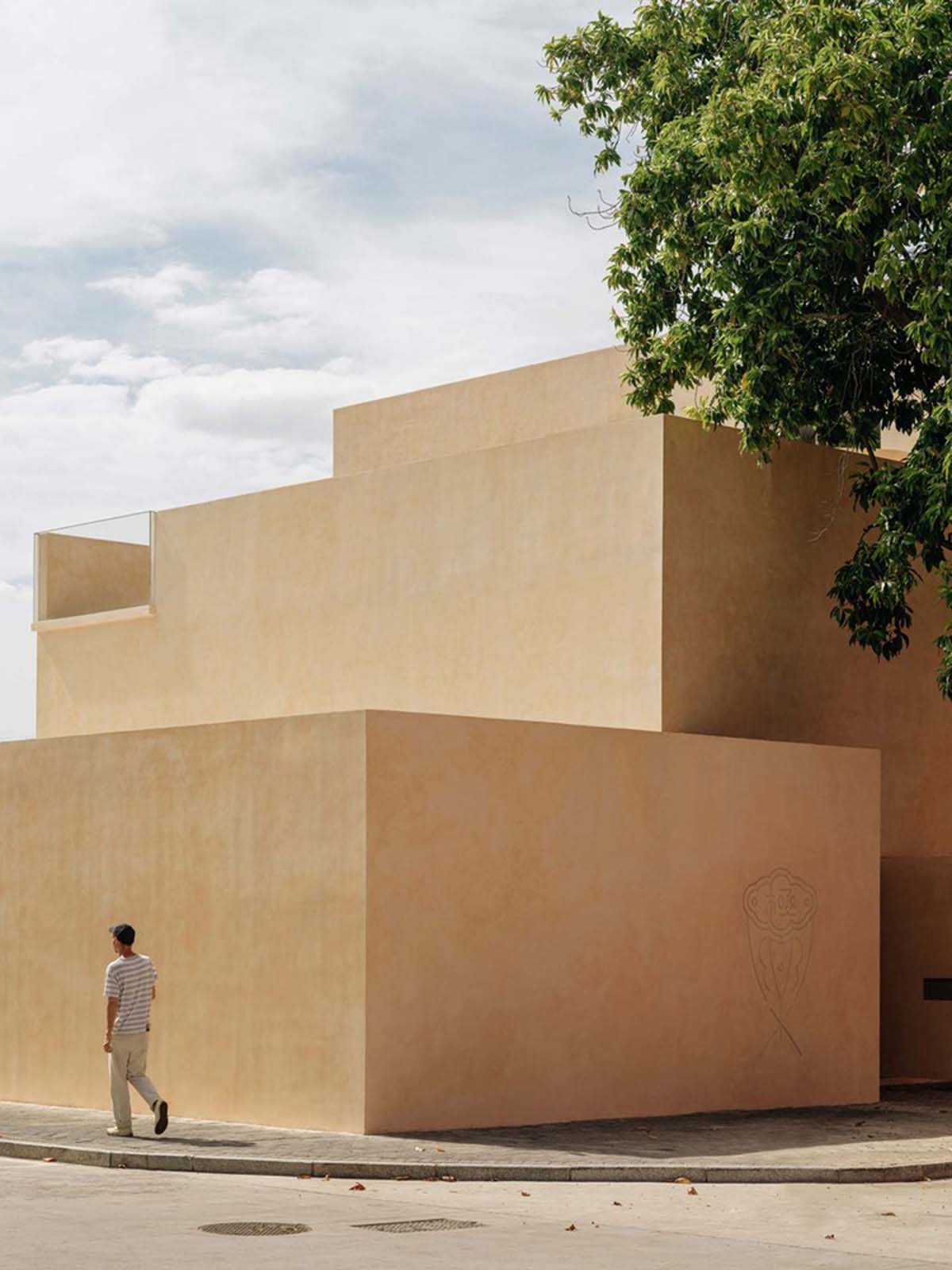 Building 1 has many windows on the facade, while the interior was divided into five independent spaces. On the east side of the Building 2, there is a big magnolia tree, and inside the building is a double-height space.

On the north side, Building 3 was previously transformed into an office space with square window arrayed on the facade.

As a concept, the architects designed the building from the inside out. 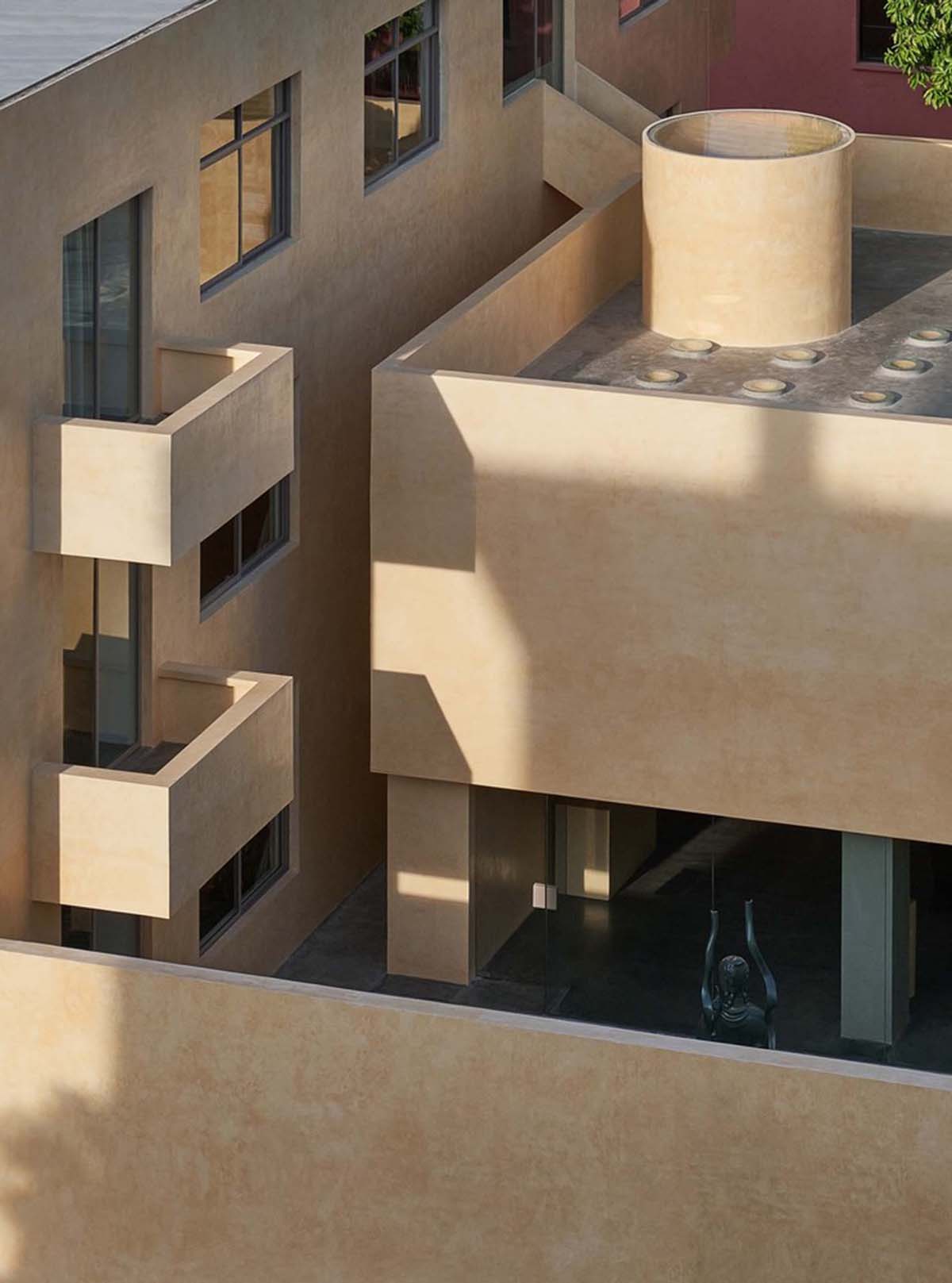 "First, we blocked up the windows on the façade of Building 1 and 2, and remove the internal walls of Building 1, to build a relatively integrated "darkroom", create a kind of inward, closed atmosphere," said TEAM_BLDG.

"Inside the exhibition hall, there is a great deal of blank as well as   all in one background. Shape of the Buddha Statues stands out with the details of architectural components concealed. Afterwards, the exterior of the building was rearranged and simplified, part of the volume was built solid." 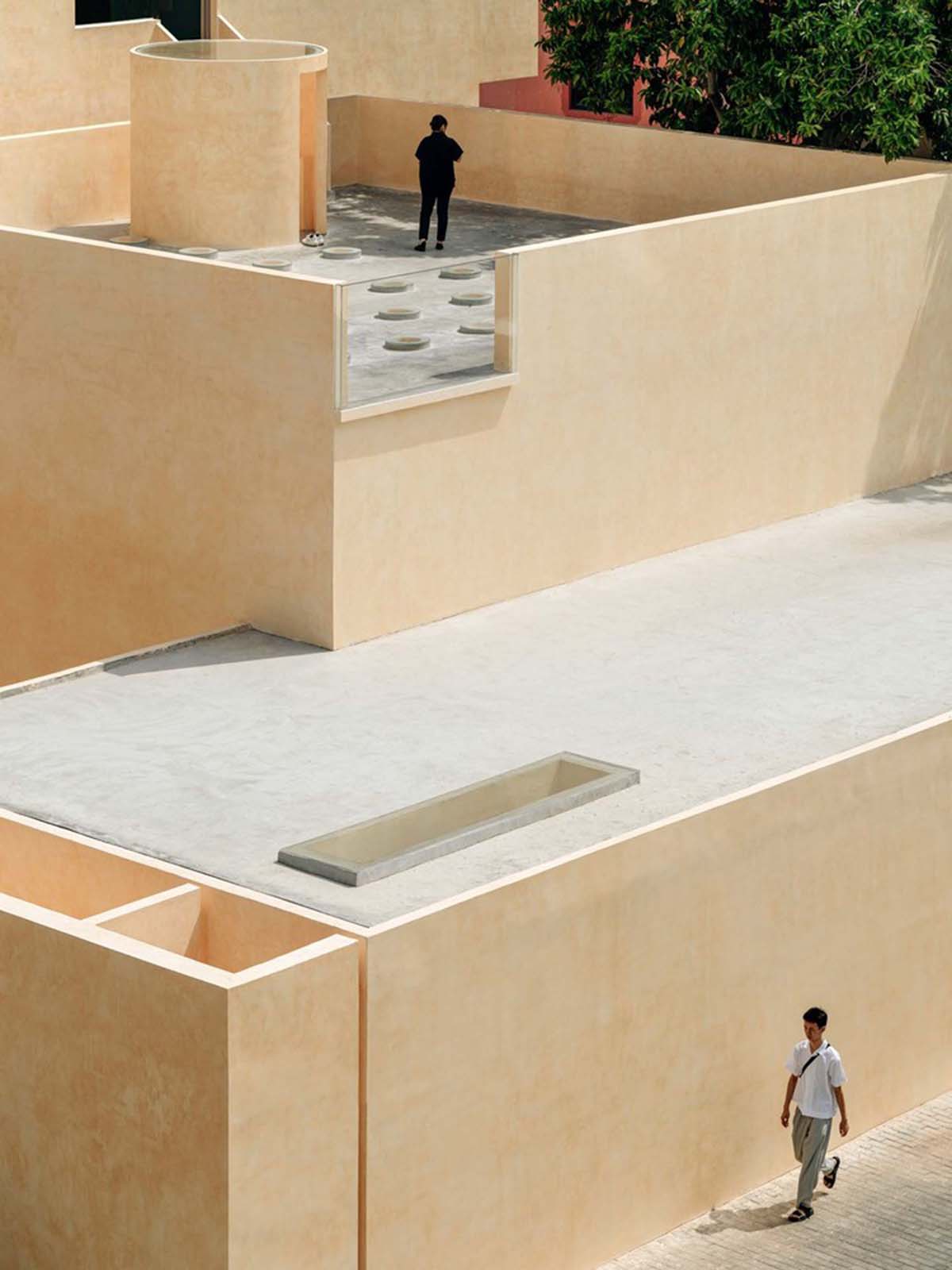 The outer skin of the building is kept simple and abstract, so for this, it is painted with the same sandalwood yellow as the interior and the special texture of the wall was hand-painted.

"Looking from a distance, a tall magnolia tree stands in the center, shape of the building blurred under the shadow of the magnolia crown. The tangible building became subtle and restrained." 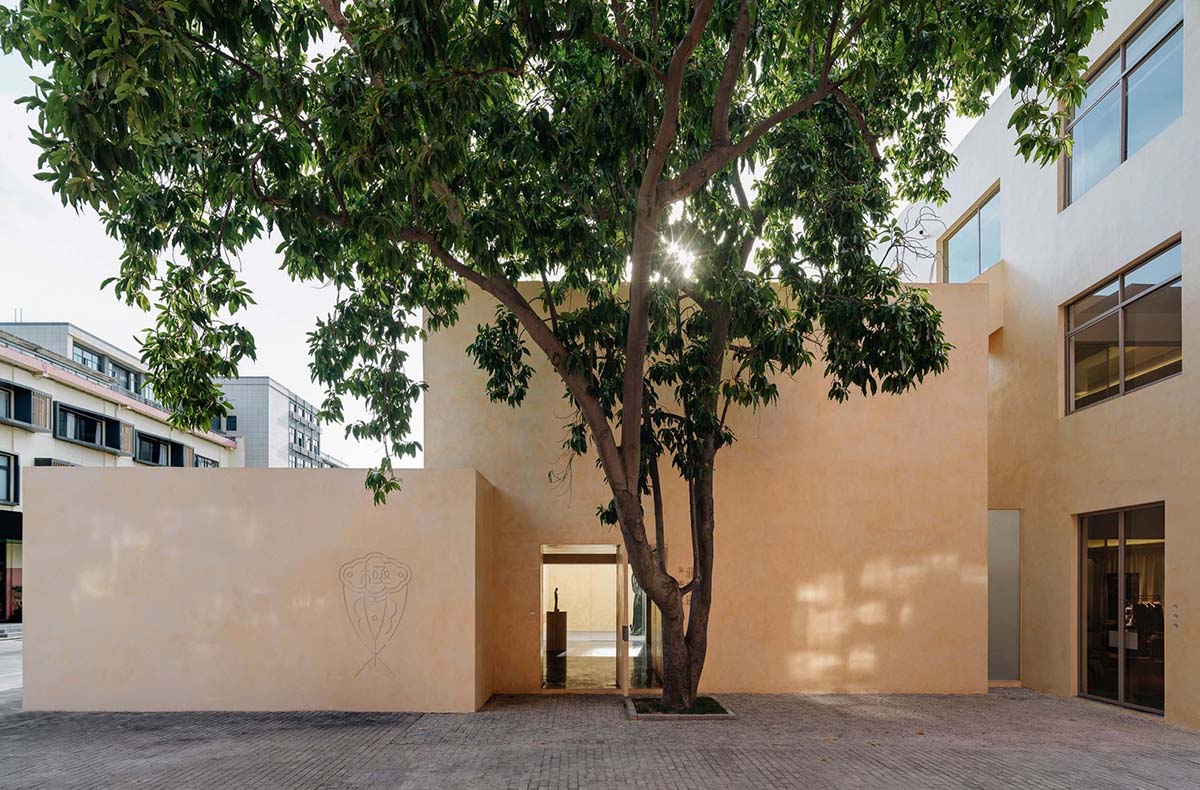 With the blanking of the architectural bodies, lights become the crucial part of the space. Xiamen is at Southeast coast of China, blessed with plenty of sunshine and rain. Large Sloping roof and small window openings are usually used in local traditional buildings.

Inspired by this, 31 skylights are added on the roof, either round or square, grouped or isolated, which produces two kinds of space bright main hall and a closed dark room. And the Buddha statues are displayed accordingly. 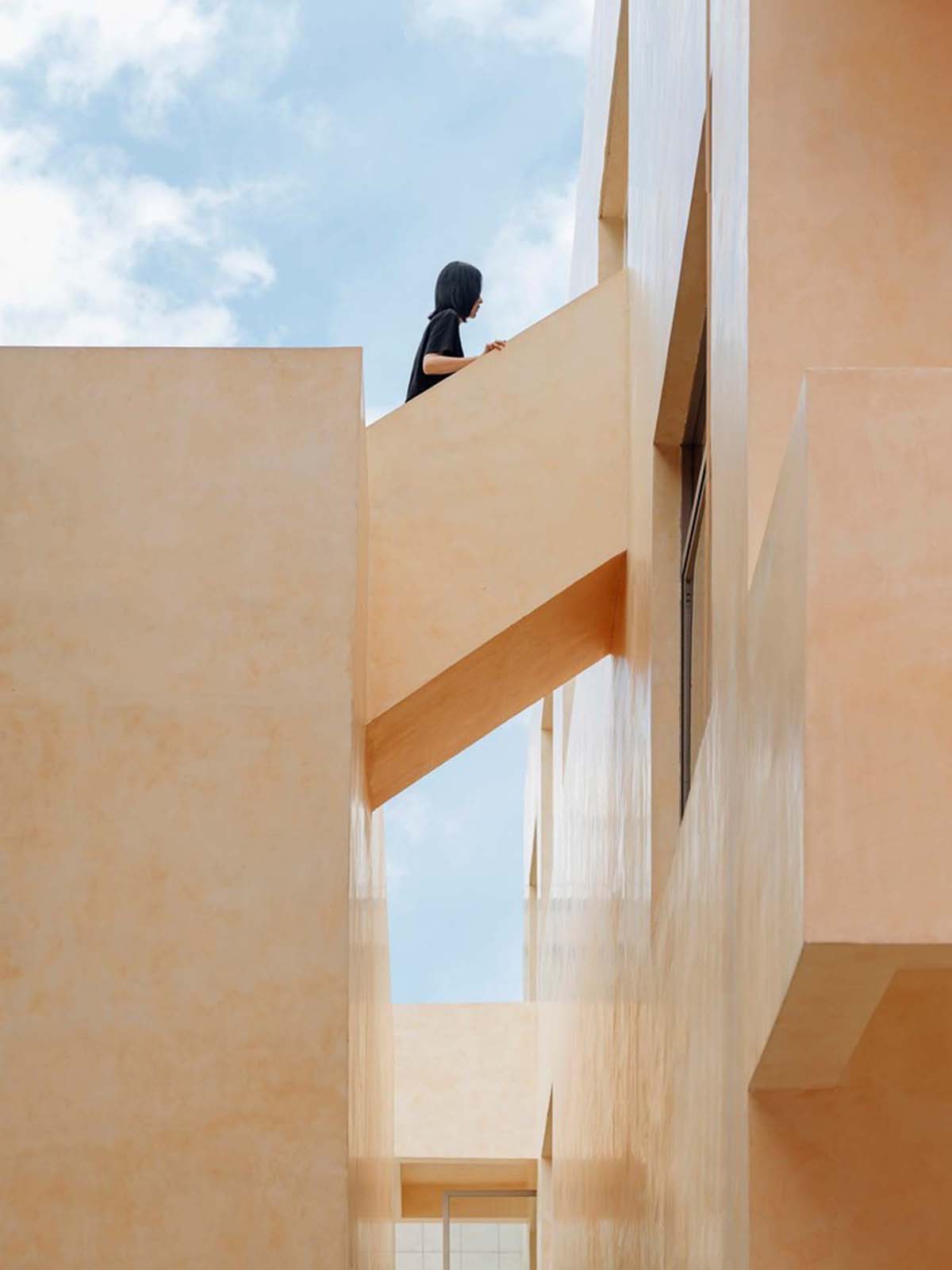 The Buddha statues in the main hall are mainly carved from dense materials such as wood and stone, and when the light hits them, the light and shadow of the statues constantly change according to the angle of sunlight. In the dark room, a stream of light serves as a spotlight while in the double-height main hall, 28 circular skylights create a stunning ‘rain of light’.

The one-story space connected to the south of the main hall is the “dark room”. The studio opened two square skylights of different sizes at the top of the dark room and a horizontal strip window at the bottom of one wall. 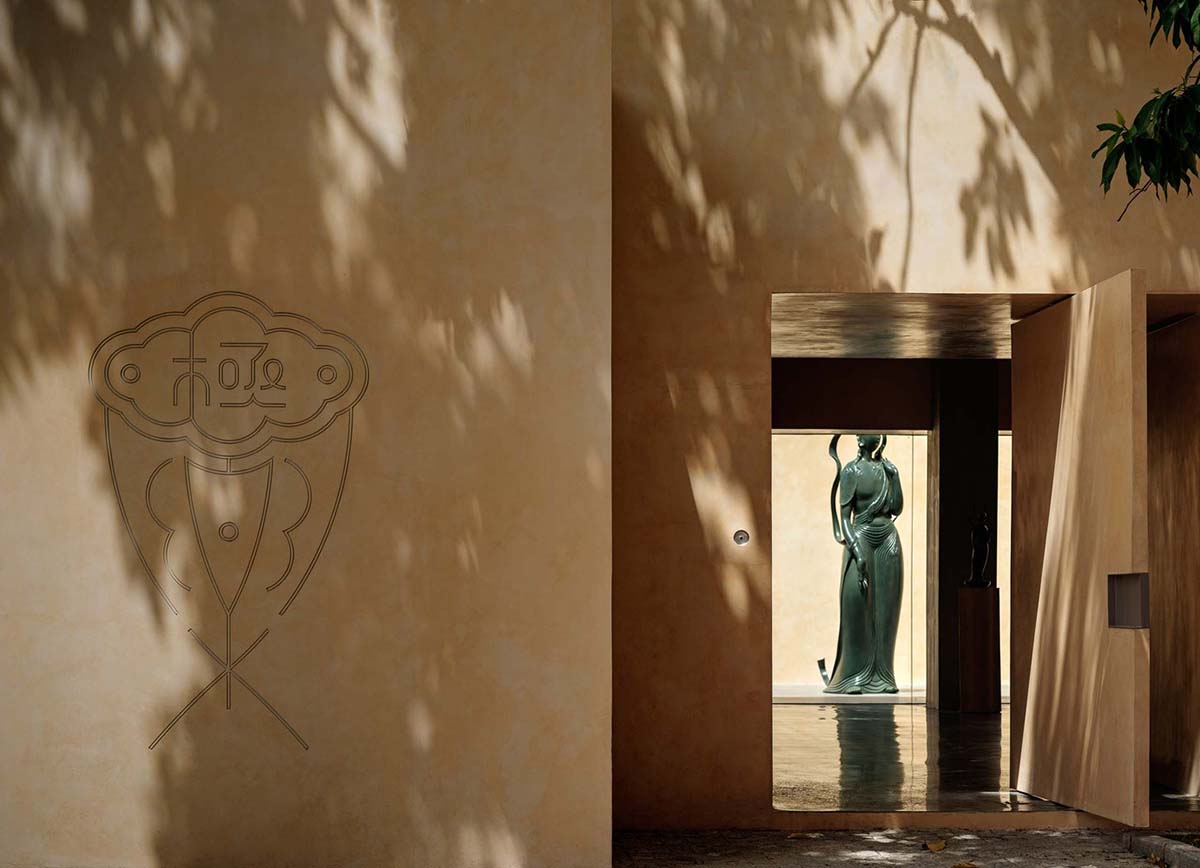 Under the reflection of light and shadow, the edges of the Buddha's image are blurred, sometimes resulting in a Zen state of "rainbowing". At different times of the day throughout the year, by "capturing" the light, the invisible time is also revealed. Time flows silently, elaborating the artistic conception of "eternal" and "constant" together with the Buddha statues settled here. 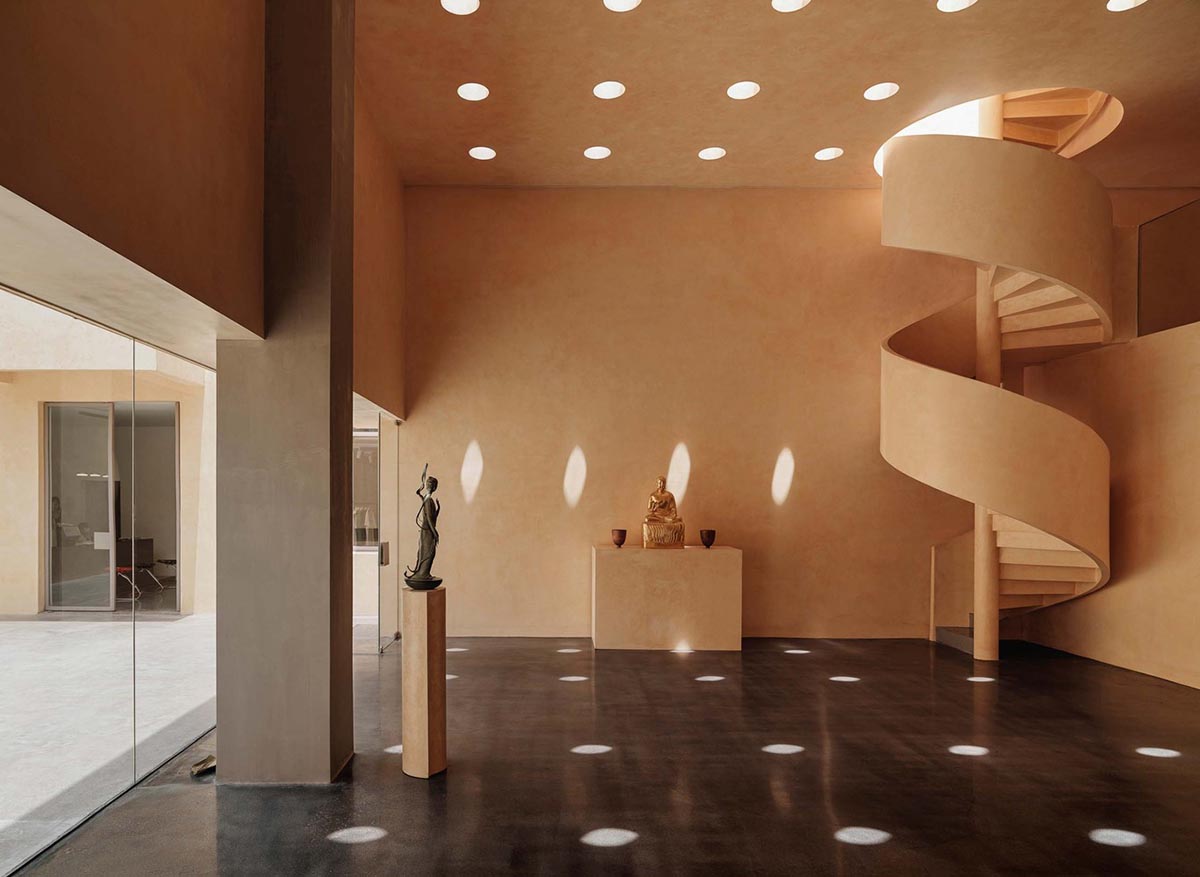 Journey to the Pure Land under the Magnolia Tree

When the studio first surveyed the site, the architects were amazed by the huge magnolia tree on the east side of the building. At that time, they did not identify the tree species, but just protect the tree as much as possible during the design process to make it a landmark for the entire project.

However, when the design is completed and half of the construction is finished, the magnolia tree which is the same age as the site blossomed inadvertently. The architects were pleasantly surprised to find that the fragrant aroma of magnolia could still be felt even indoors.

After the renovation, the magnolia tree is like a dharma-vessel of the " The Field ". The simple building forms became more obscured under the cover of the dense canopy. The renovation of the windows and doors alongside the street facade enclosed the internal spaces, adding a bit of intriguing interest to the architecture. 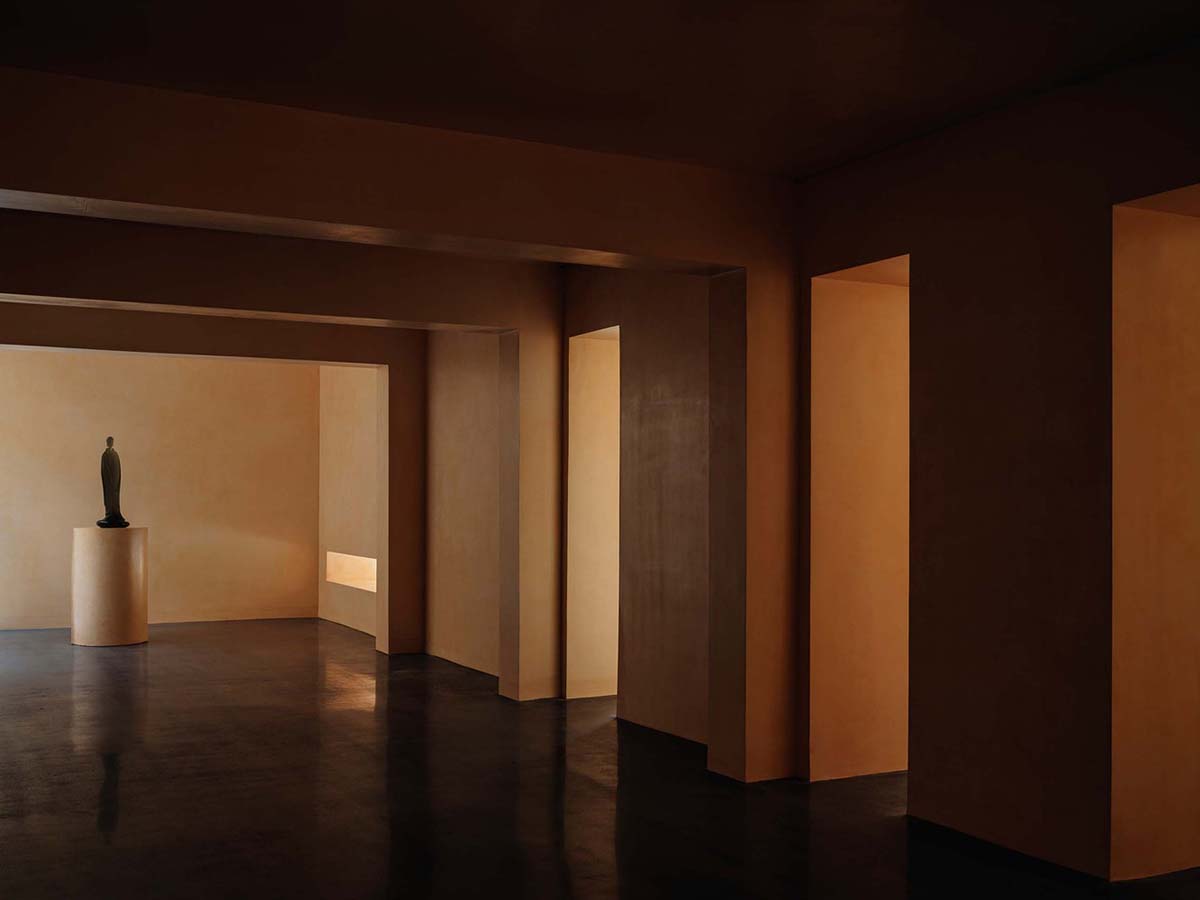 Guided by the magnolia tree, visitors bypass the wall and enter the exhibition hall through the revolving door under the canopy. After arriving at a low foyer, the space automatically guided the circulation into the double-height exhibition hall by the "rain of light" formed by the arrays of round skylights.

There is a floor-to-ceiling windows on one side of the main hall connecting to the courtyard, blurring the boundary between indoors and outdoors as much as possible. On the south side of the main hall, four doorways lead to the one-story "dark room" that separates the light from the dark in an orderly fashion. 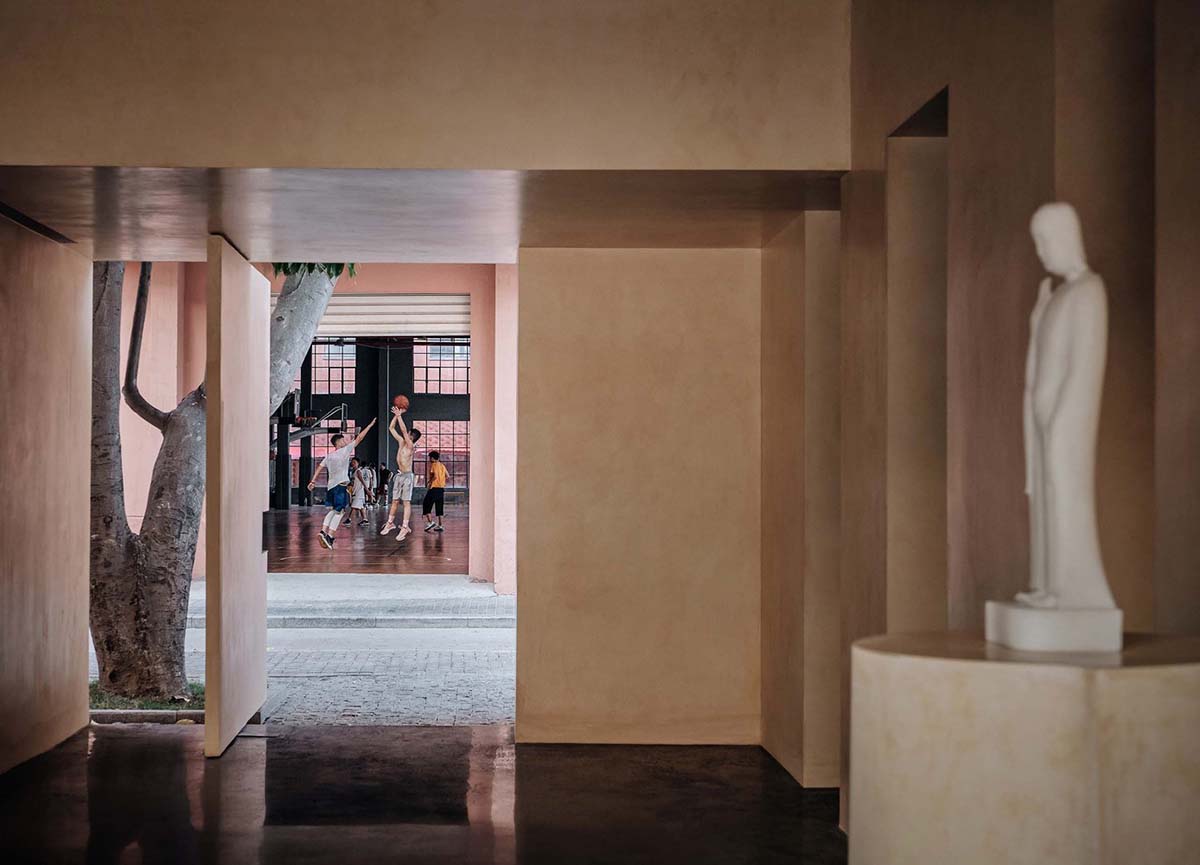 In one corner of the main exhibition hall, a spiral staircase leads vertically upward to the roof terrace, where the magnolia tree is just close at hand reach, and the fragrance of leaves and flowers welcomes you.

An outdoor staircase was added to a corner of the terrace to connect the Buildings 2 and 3. To improve the sense of space and transparency in the office area, the studio removed the thick elevator shaft walls and added a skylight at the top of the stairwell. A vertical stairwell with changing light and shadow leads down to the fashion showrooms and workshops on the first and second floors of the office building.

The entire building is connected as the "magnolia tree - Buddha statues and light - roof terrace - office space - fashion showroom - magnolia tree" route, forming a cyclical circulation in and out the building. The magnolia tree guides and speaks within the circulation, which is both the start and the end of it. 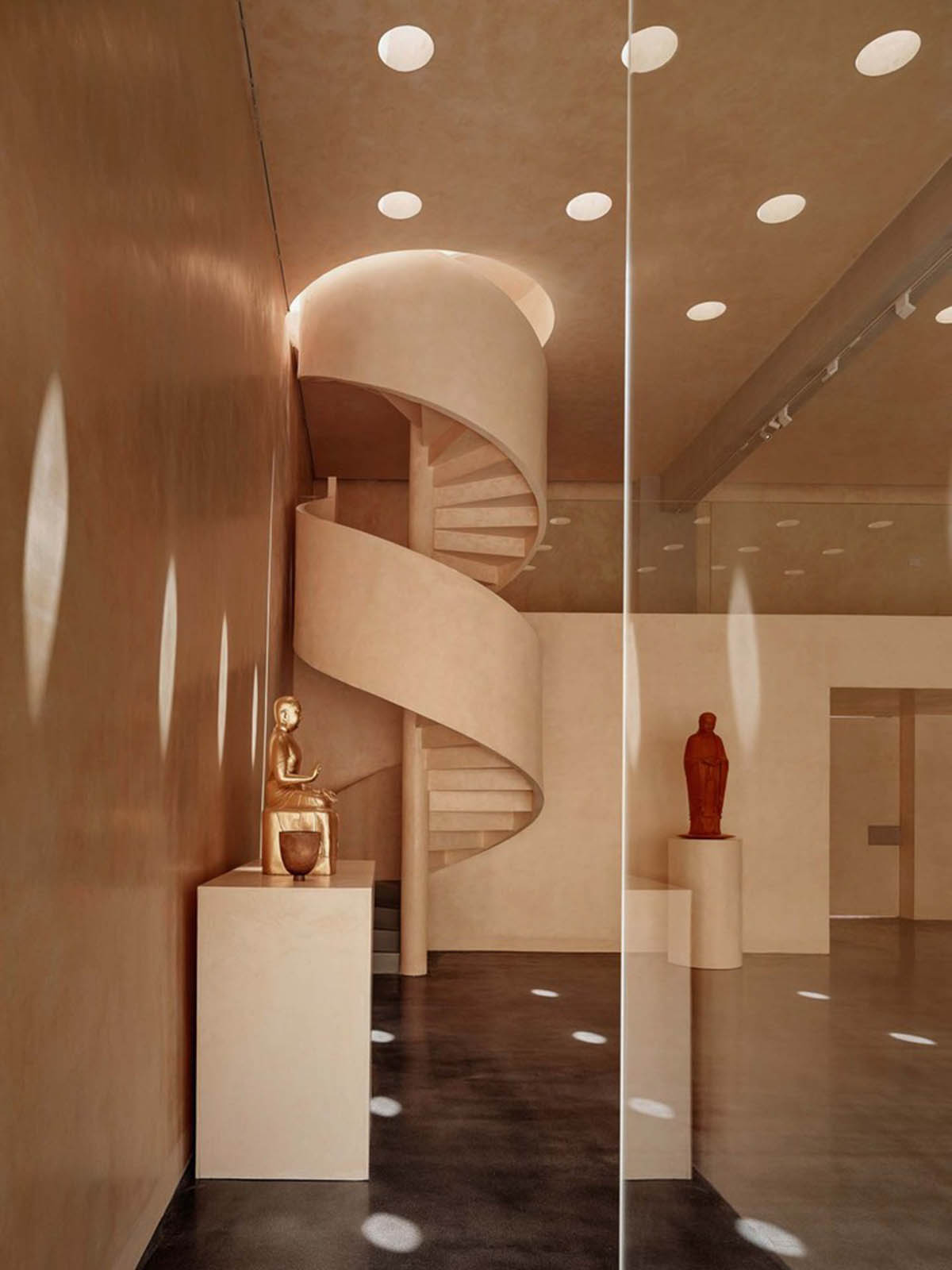 The architects explained that there has been a limited budget for the project in terms of construction cost and craftsmanship since the very beginning. Both the studio and the client agreed that they should design according to the existing site condition. Therefore, it has created a vitality of "rough" in the building and space, which is in contrast to the exquisiteness of the Buddha statue.

The exterior of the building and the interior of the Buddha statue exhibition hall (most of the spaces such as ceilings, walls, etc.) use a texture paint. However, there is no suitable supplier for this texture paint in the local area. In order to achieve the final effect, the client, the constructors and us conducted repeated trials and proofing on the site. 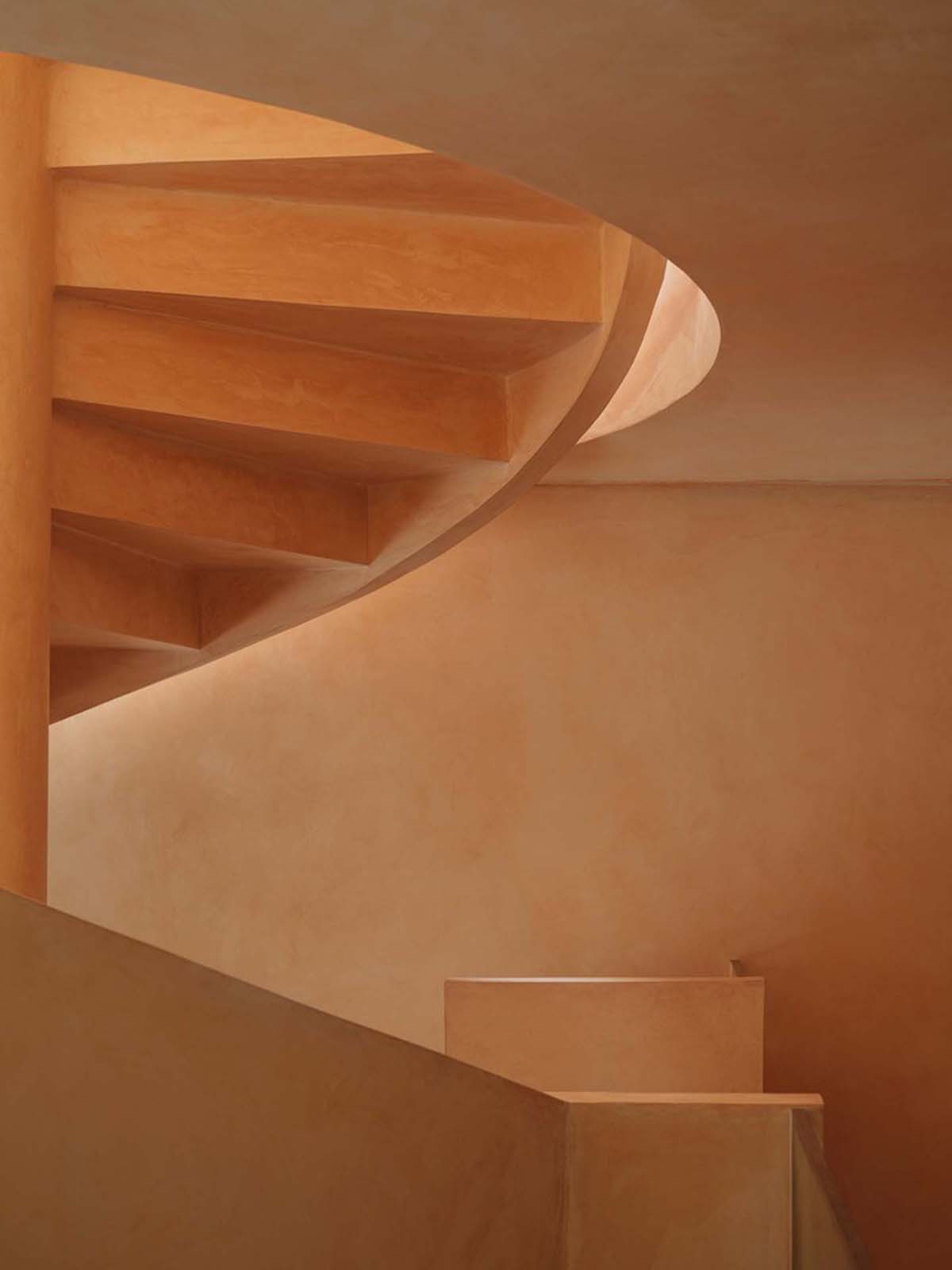 Finally, all the special textures of the outdoor and indoor walls were hand-painted by the workers. The finished texture effect makes the three buildings, which were relatively independent and with different facade languages, regain the remarkable integrity and recognition. Unfortunately, the exhibition hall was original with the same ceiling, floor and wall, which can make the light and Buddha statues in the space more prominent, but due to construction time issue, the floor was changed into dark gray emery floor that is the same as the office area.

In addition, due to the complex urban contexts, after the completion of the building, we found many interesting "accidents": the original austere meeting room turned pink under the reflection of the red building outside the window; the simple gray window frames looked like purple under the influence of the outside environment. 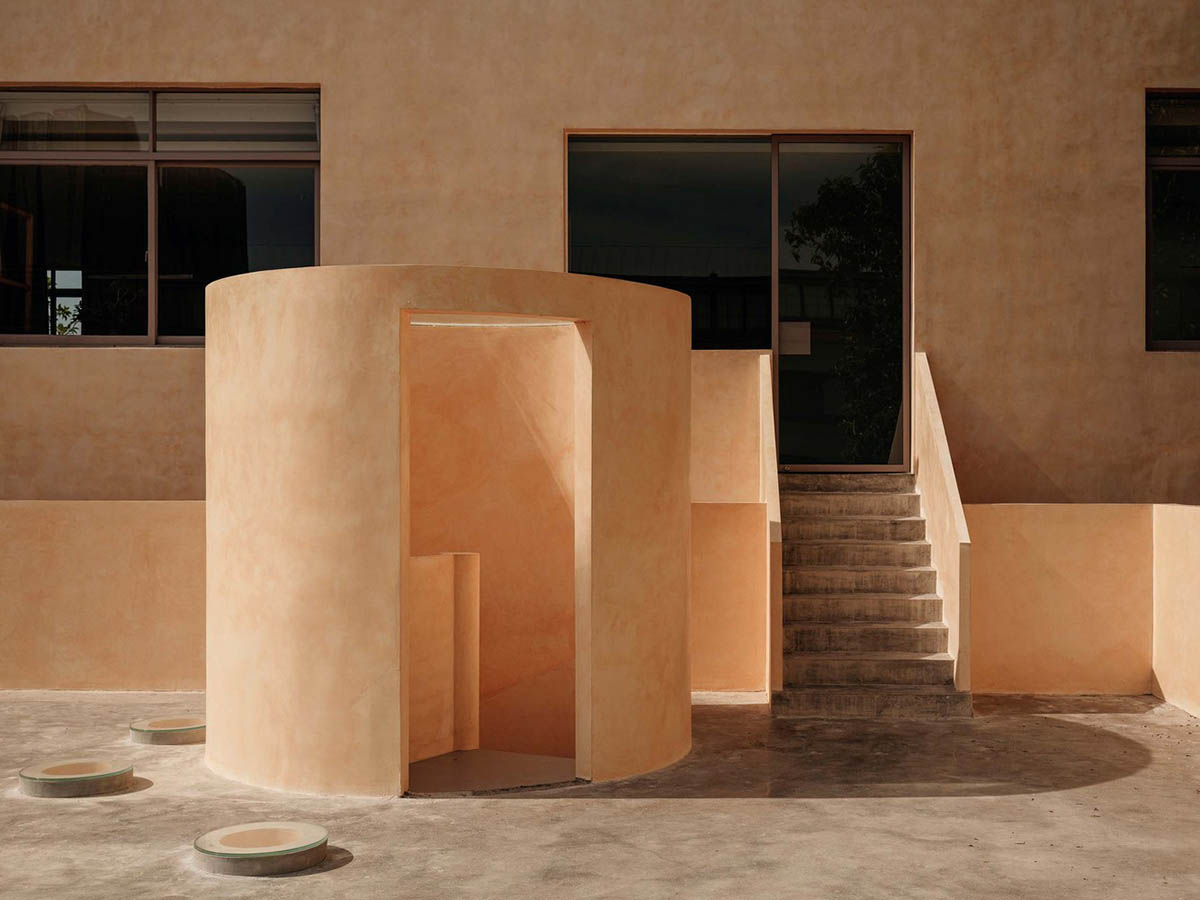 The client eventually decided to keep all these "accidents", he believes this is also an interpretation of the meaning of "Elysium”. Speaking of the purpose of creating the " The Field ", the client hopes to create something fundamentally, such as the visual innovation of Buddha statues.

Therefore," The Field " is aiming to innovate the space, and in this way, it would be able to present some new experiences and insights in the fields of faith. 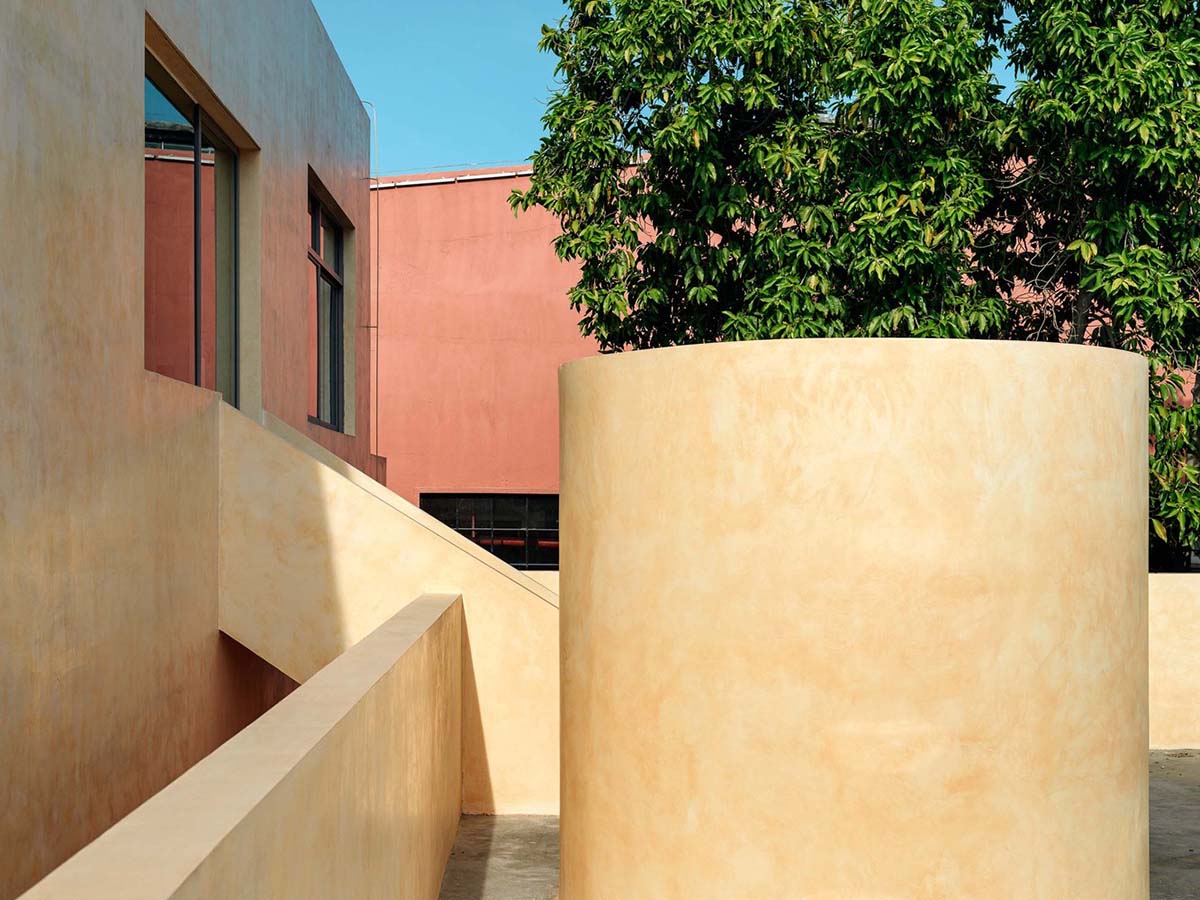 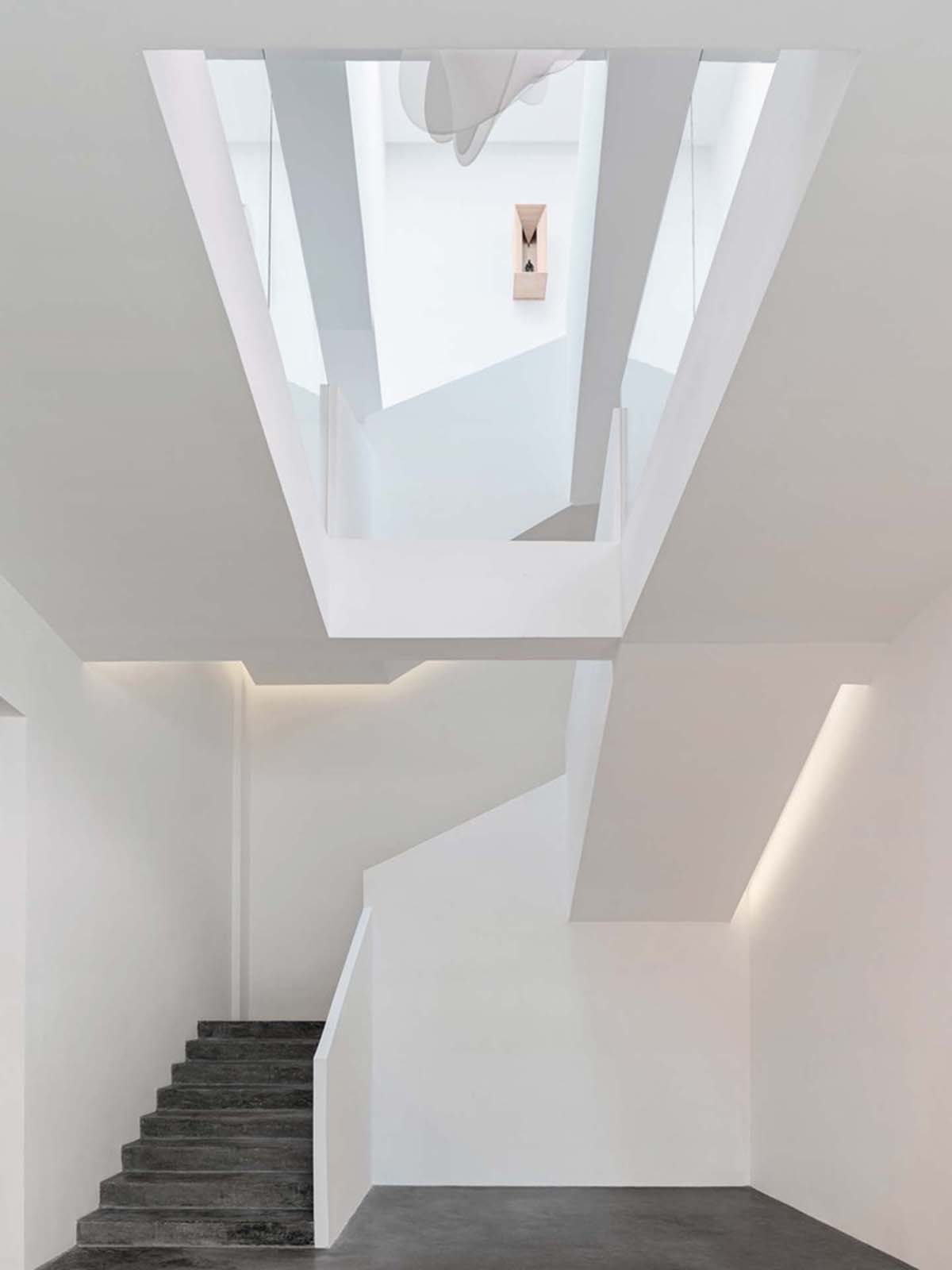 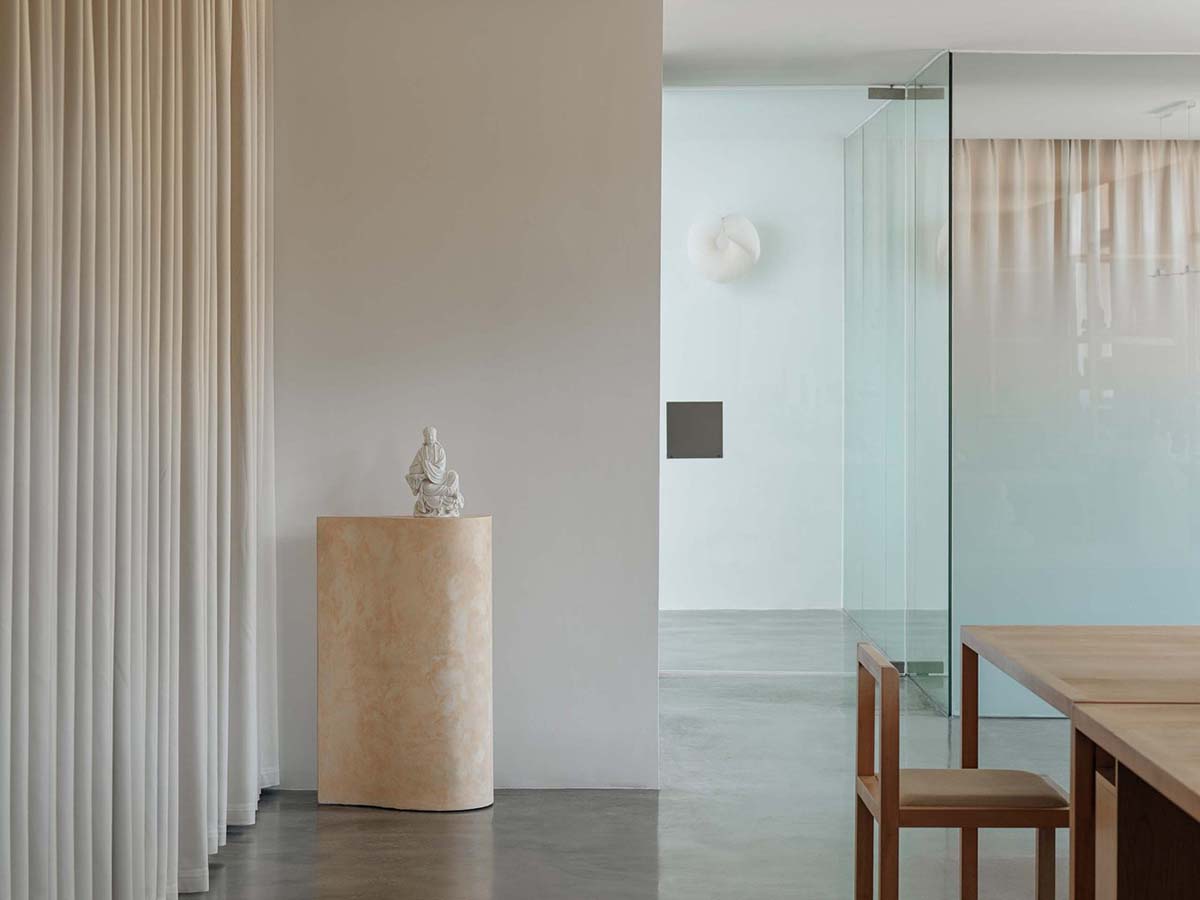 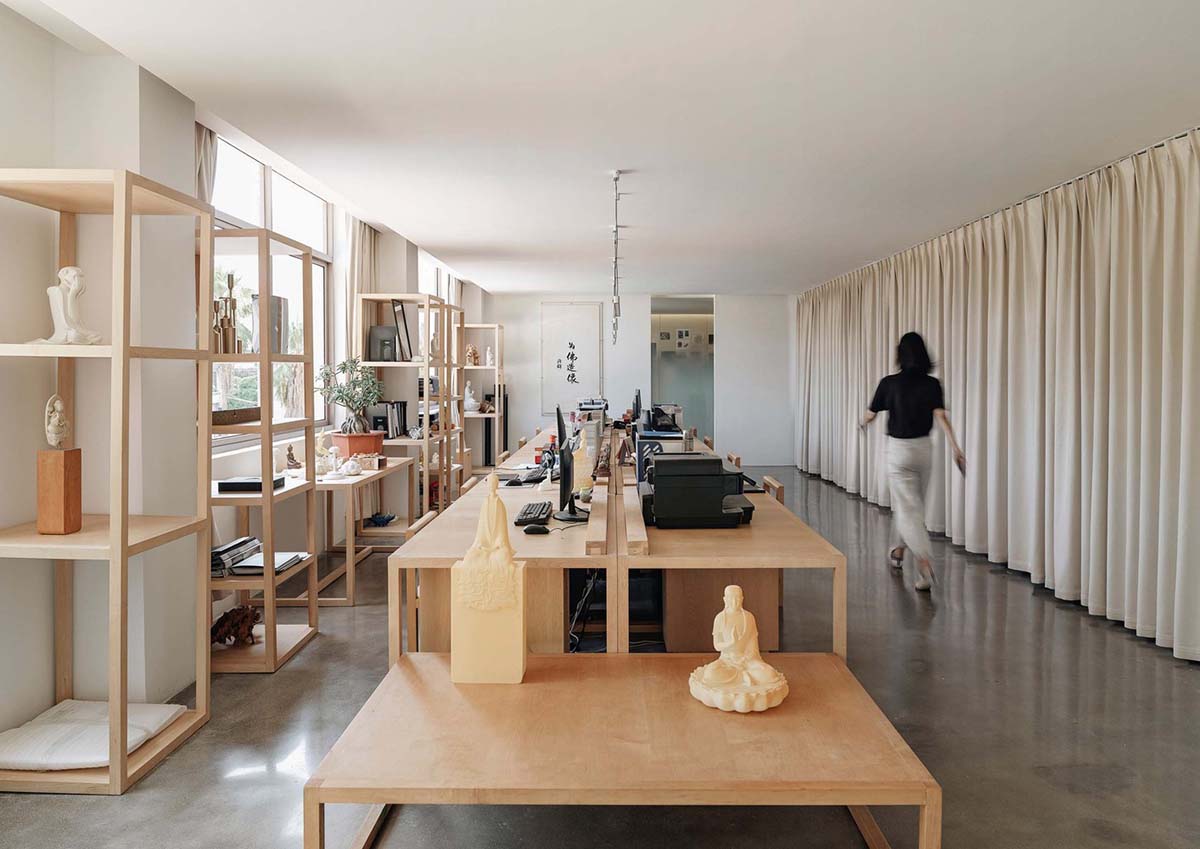 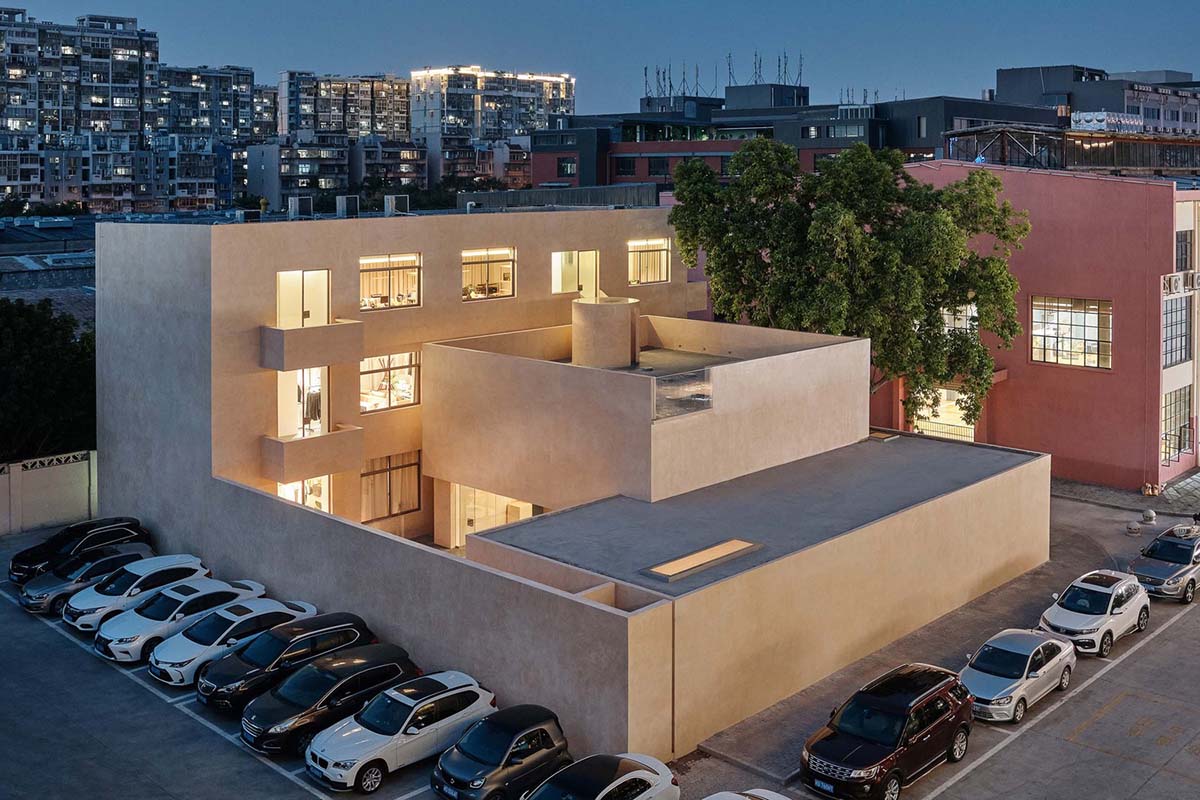 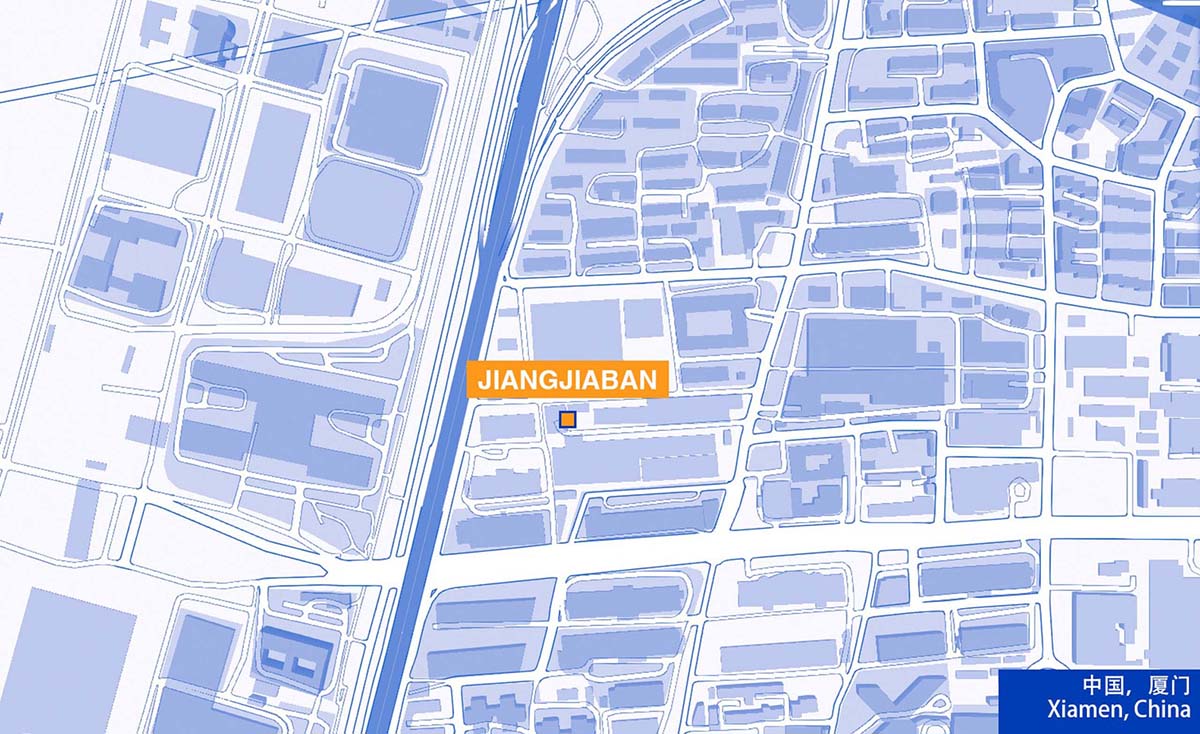 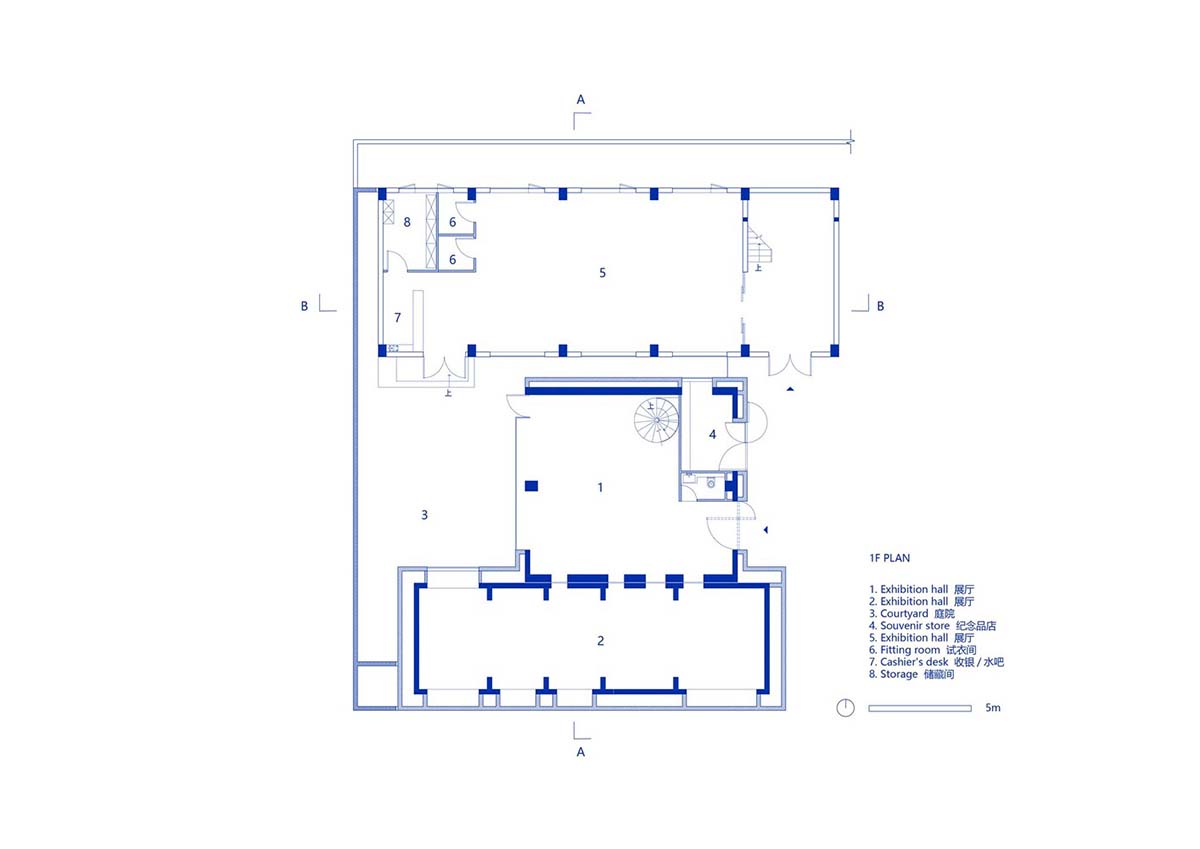 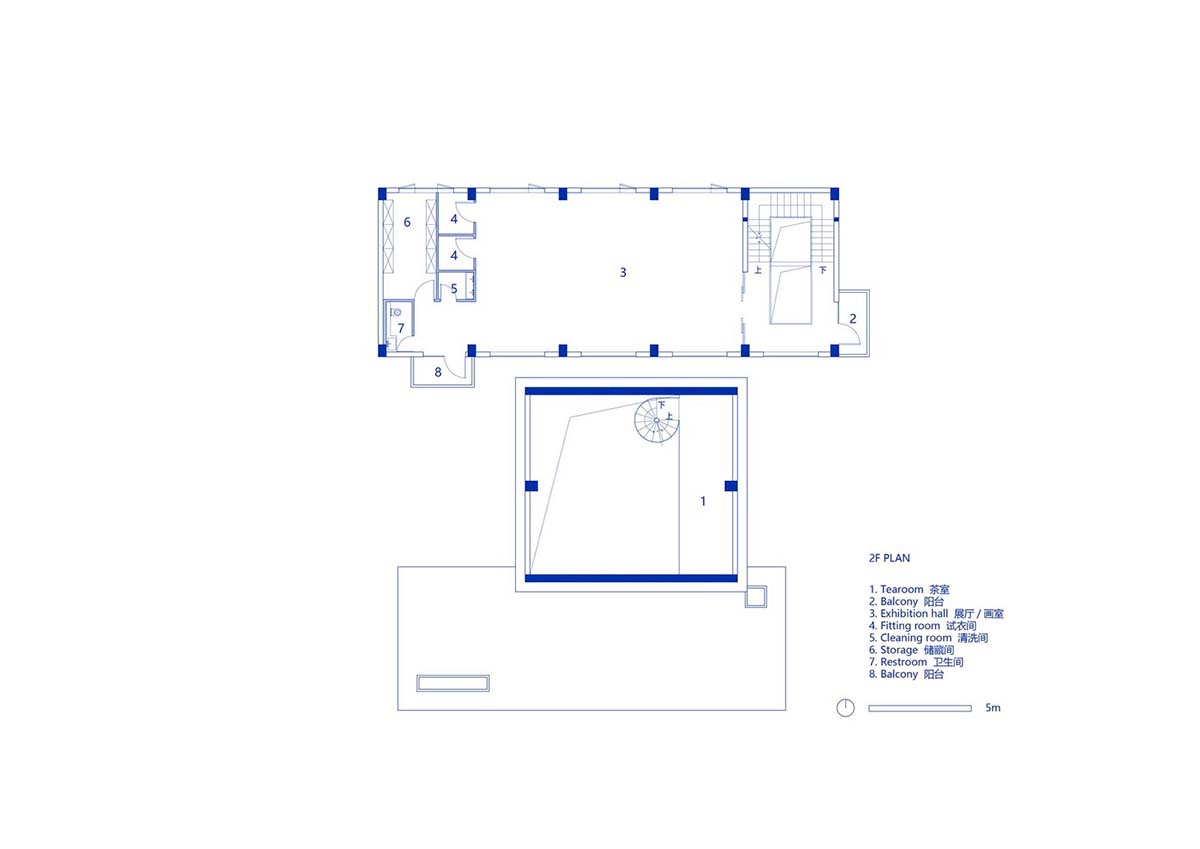 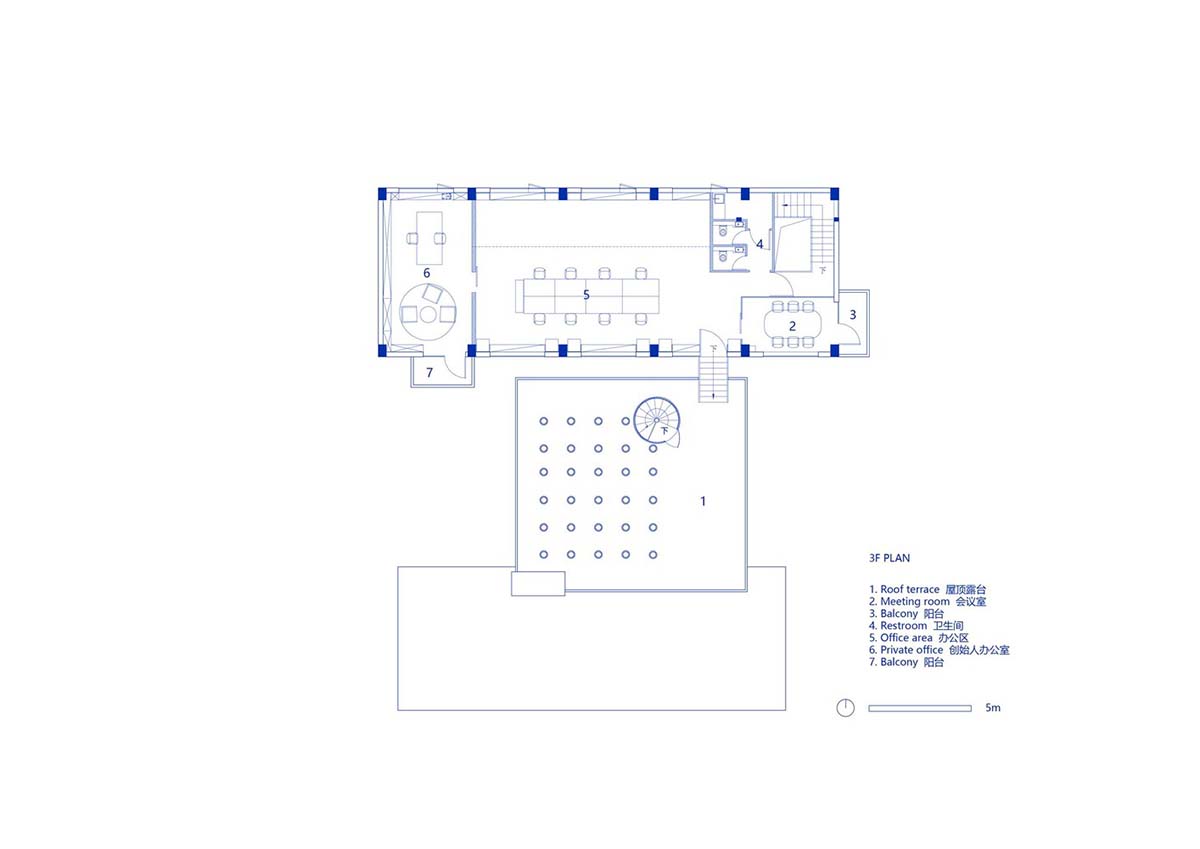 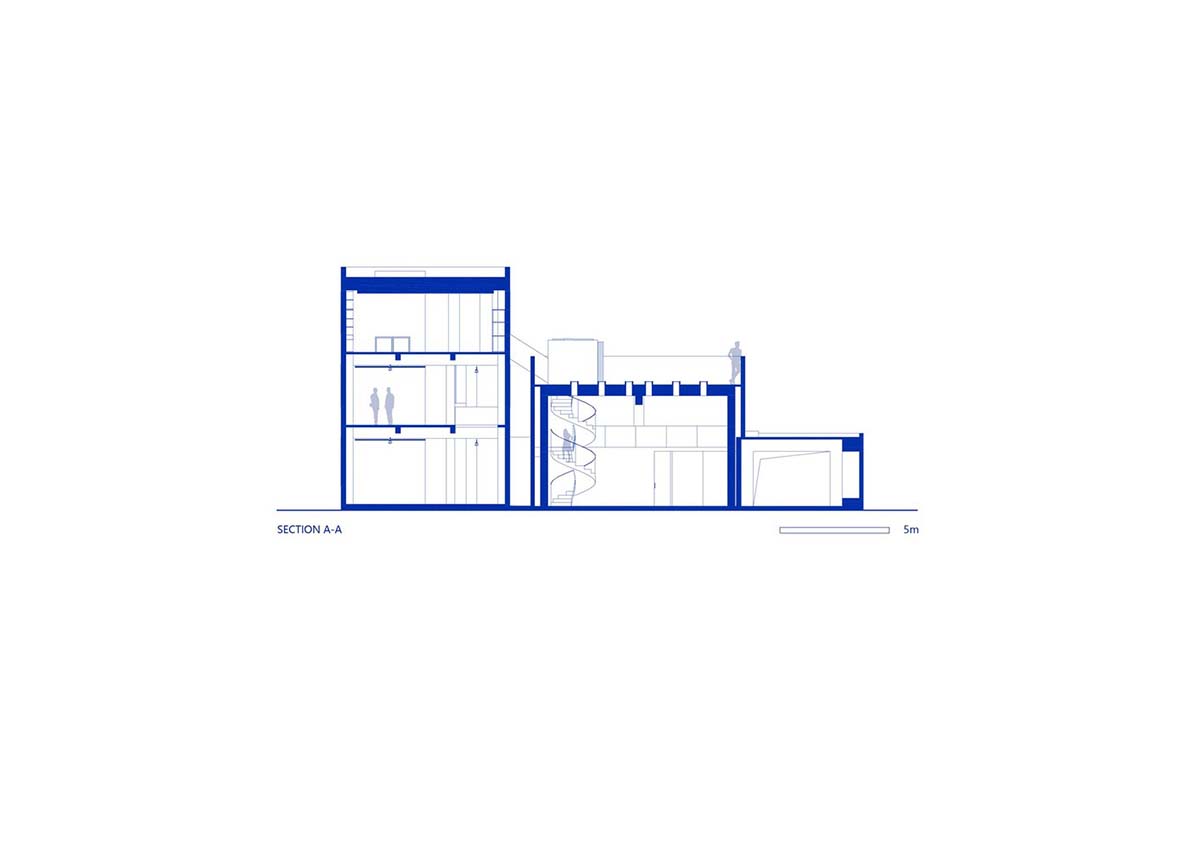 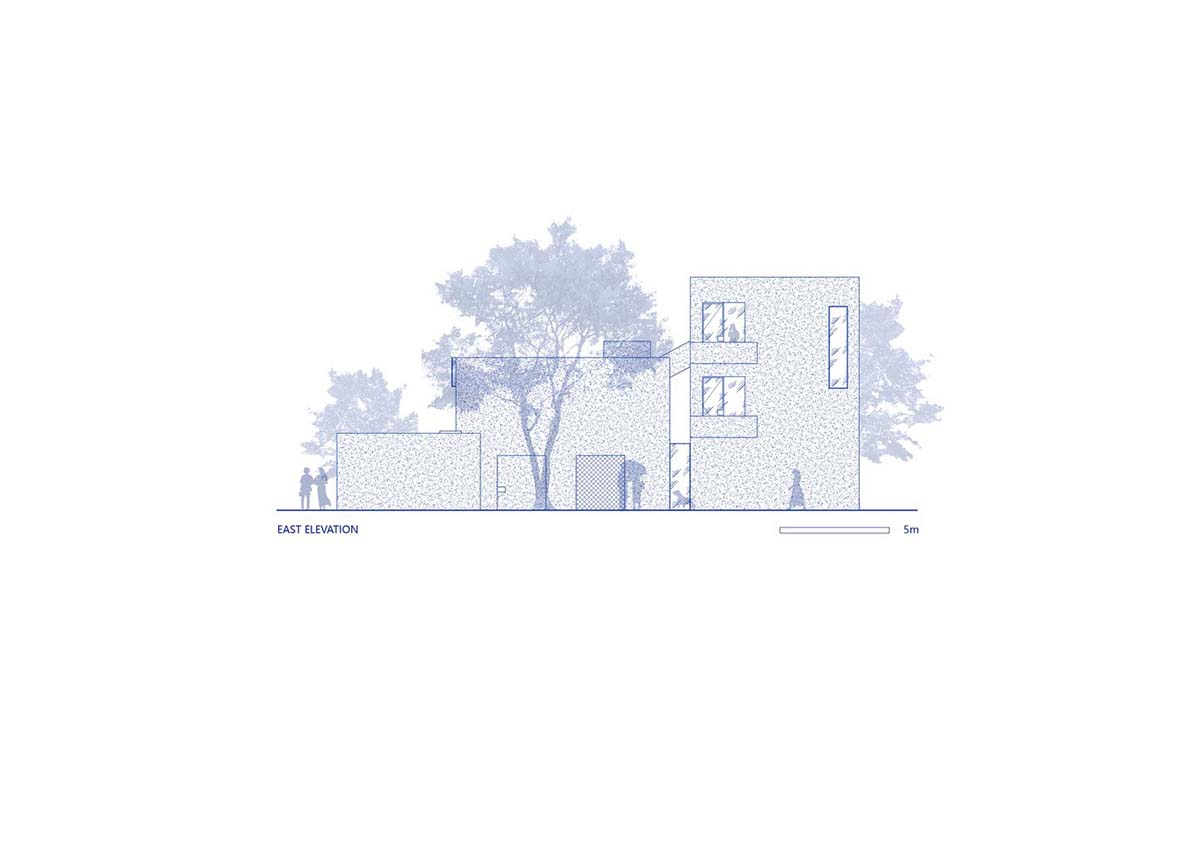 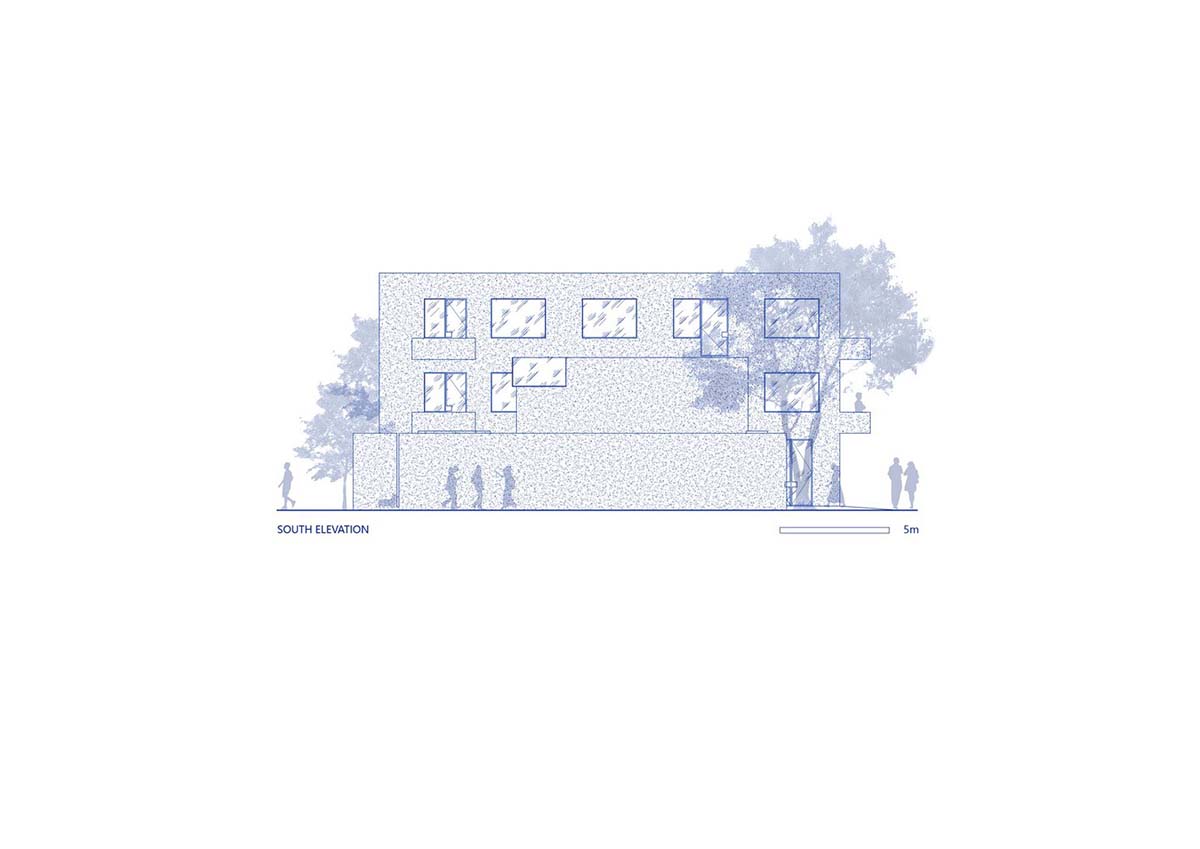 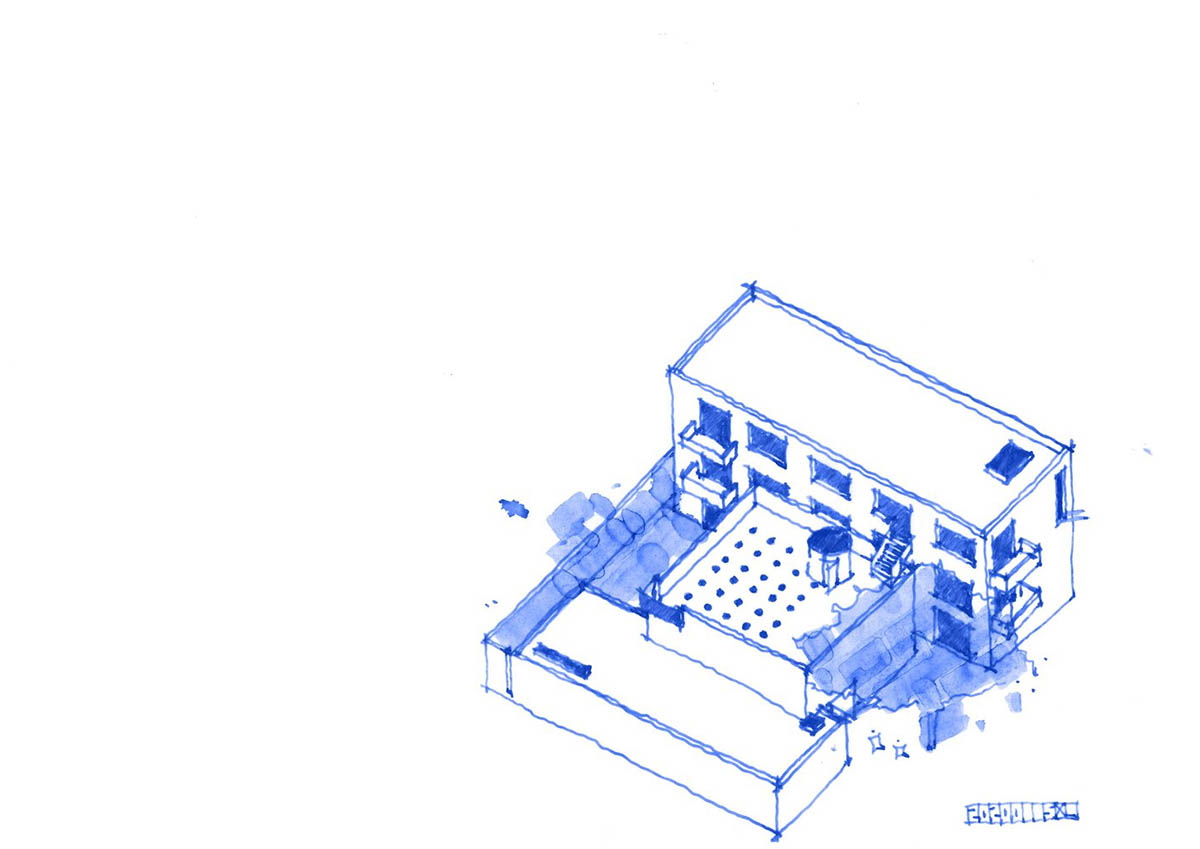