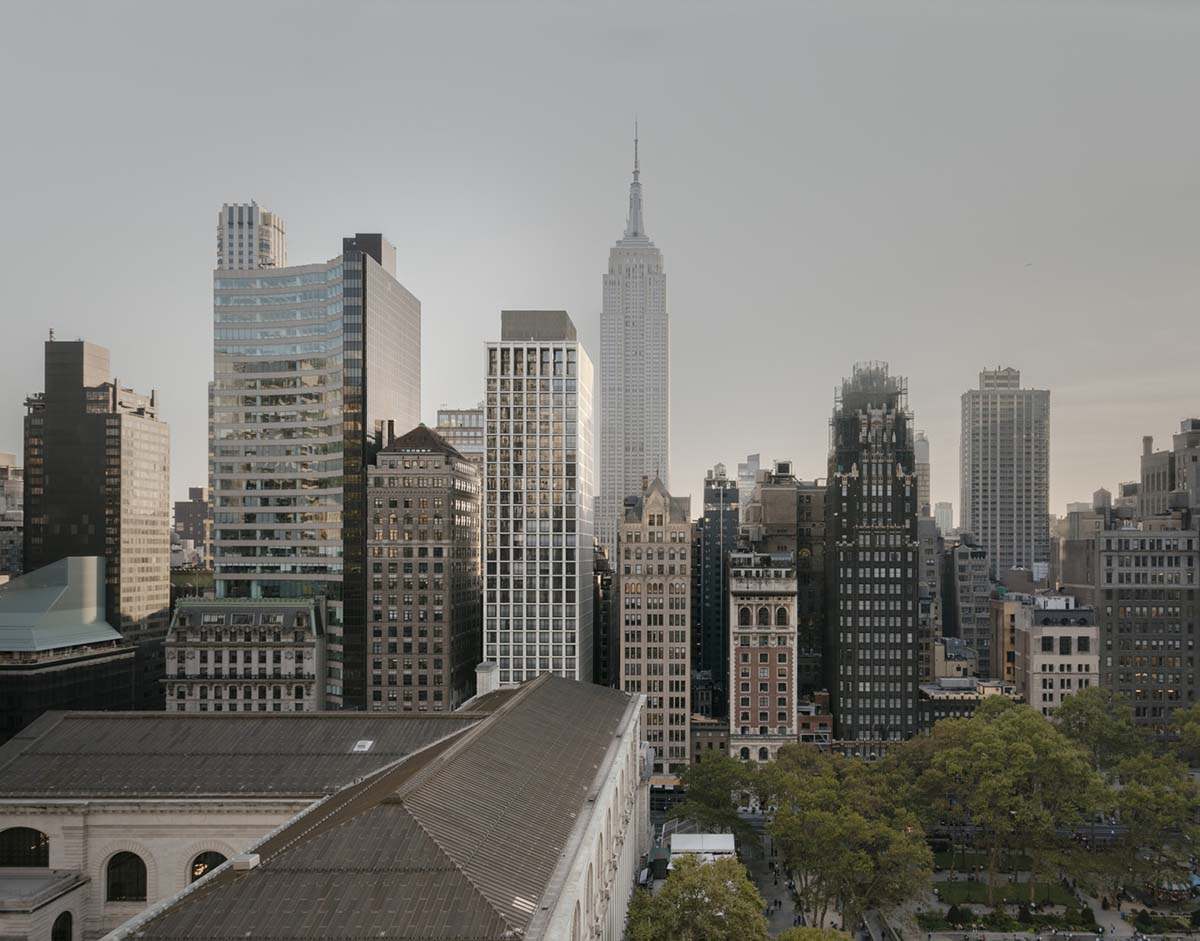 British architecture practice David Chipperfield Architects has completed a 32-storey mixed-use tower in New York, the tower consists of a hotel that extends to the 13th floor and private residences above.

Named The Bryant, the tower is located on the south-west corner of Bryant Park, a nine-acre public park in Midtown Manhattan.

The project's plot is surrounded by historic landmark buildings, the 21,200-square-metre tower faces the New York Public Library to the north, and is situated near the celebrated Beaux-Arts style Knox Building to the east. 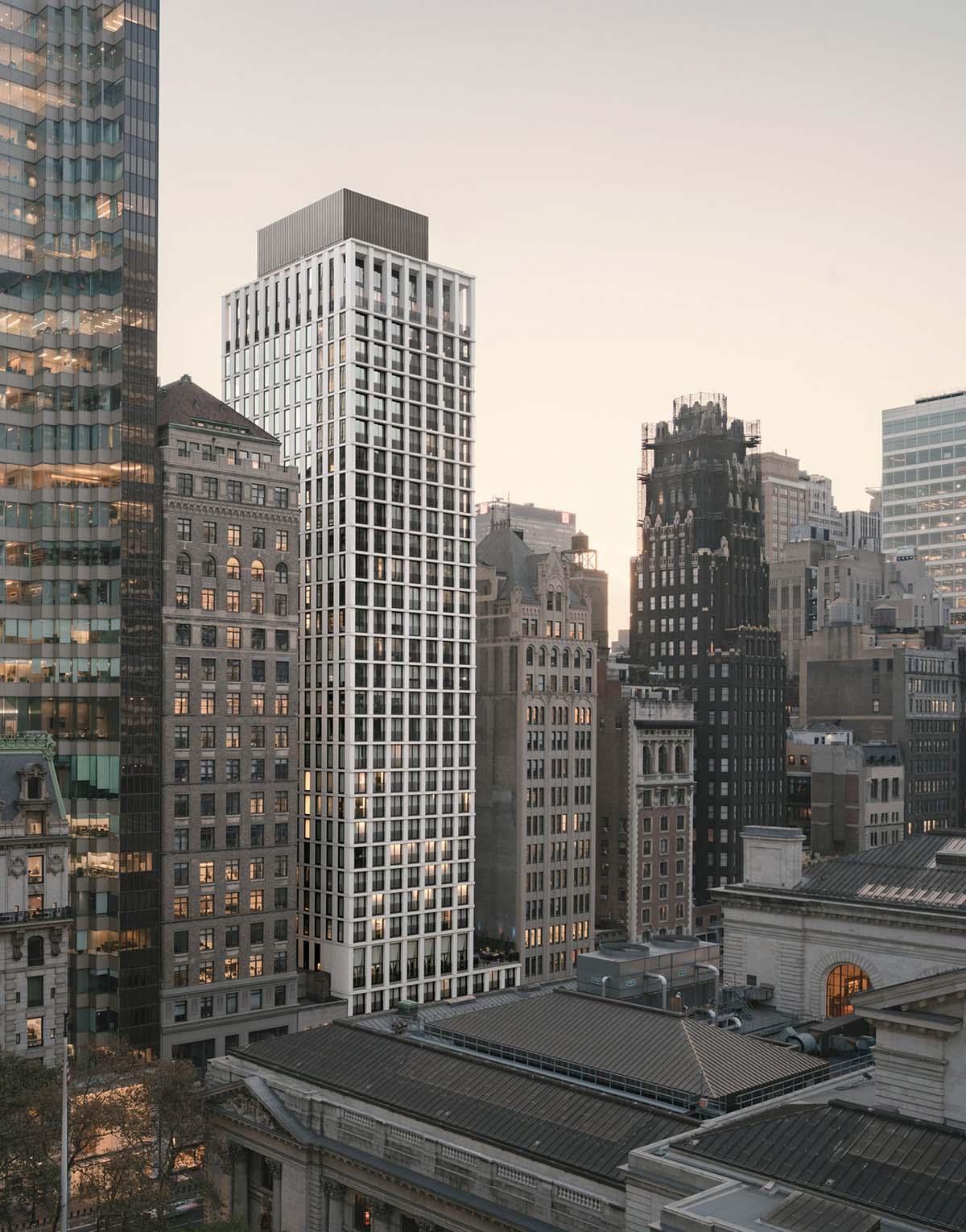 On the double-height ground floor, there are two separate lobbies - one is for the hotel, another is for residences - with retail on both sides of each entrance animating the street front.

In the general architectural language of the tower, the building is articulated with three separate parts following the traditional tripartite composition of the New York tower: base, middle and crown.

The base of the tower occupies the full width of the site and consists of a double-height ground floor as well as the first four levels of the hotel. 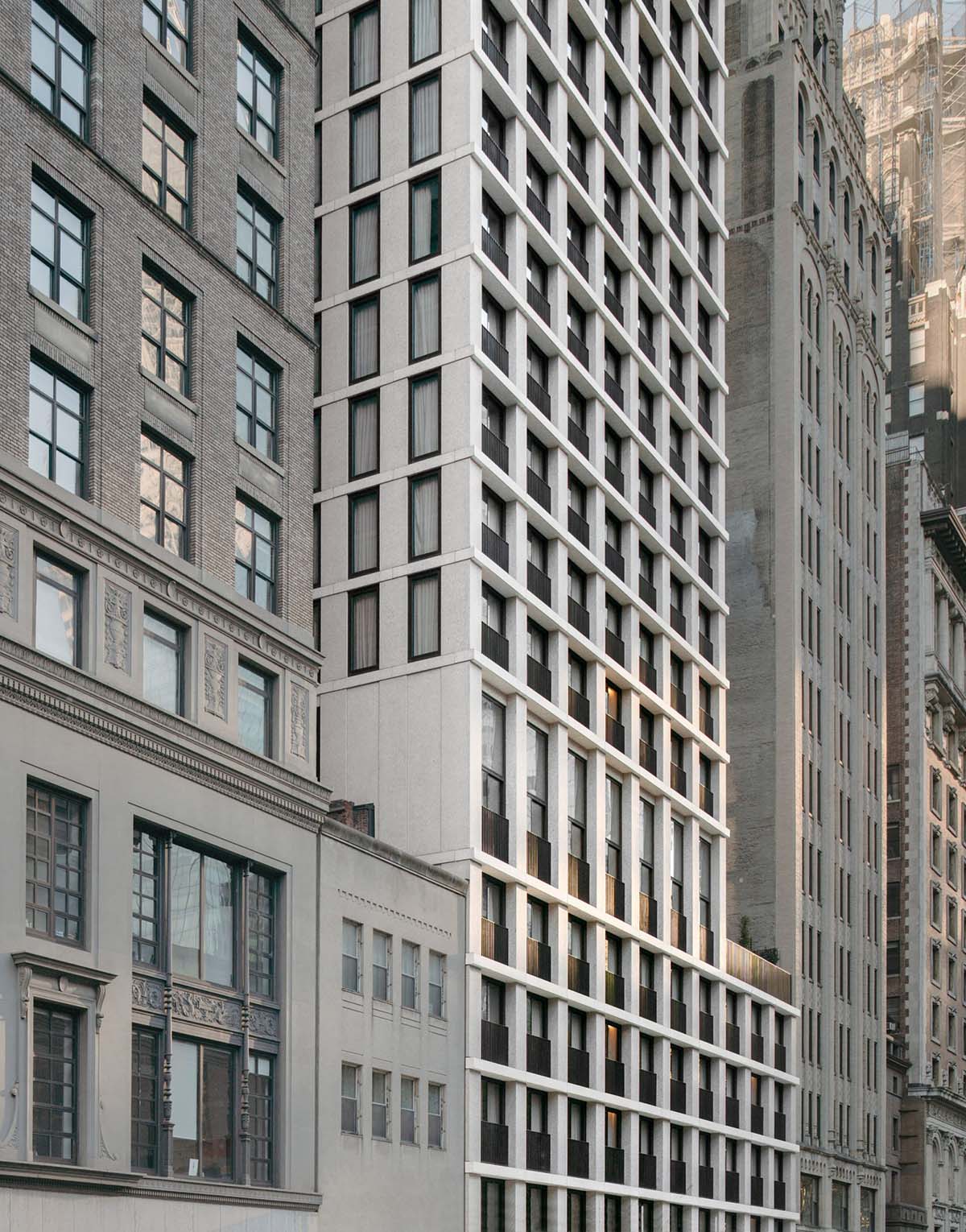 "A decreased footprint, together with an increased floor-to-ceiling height for the hotel bar and lounge, mark the start of the central section," said David Chipperfield Architects.

"This set-back creates an outdoor terrace accessible to both hotel guests and residential tenants while maintaining the elevation pattern of alternating medium and high-rise buildings along 40th Street." 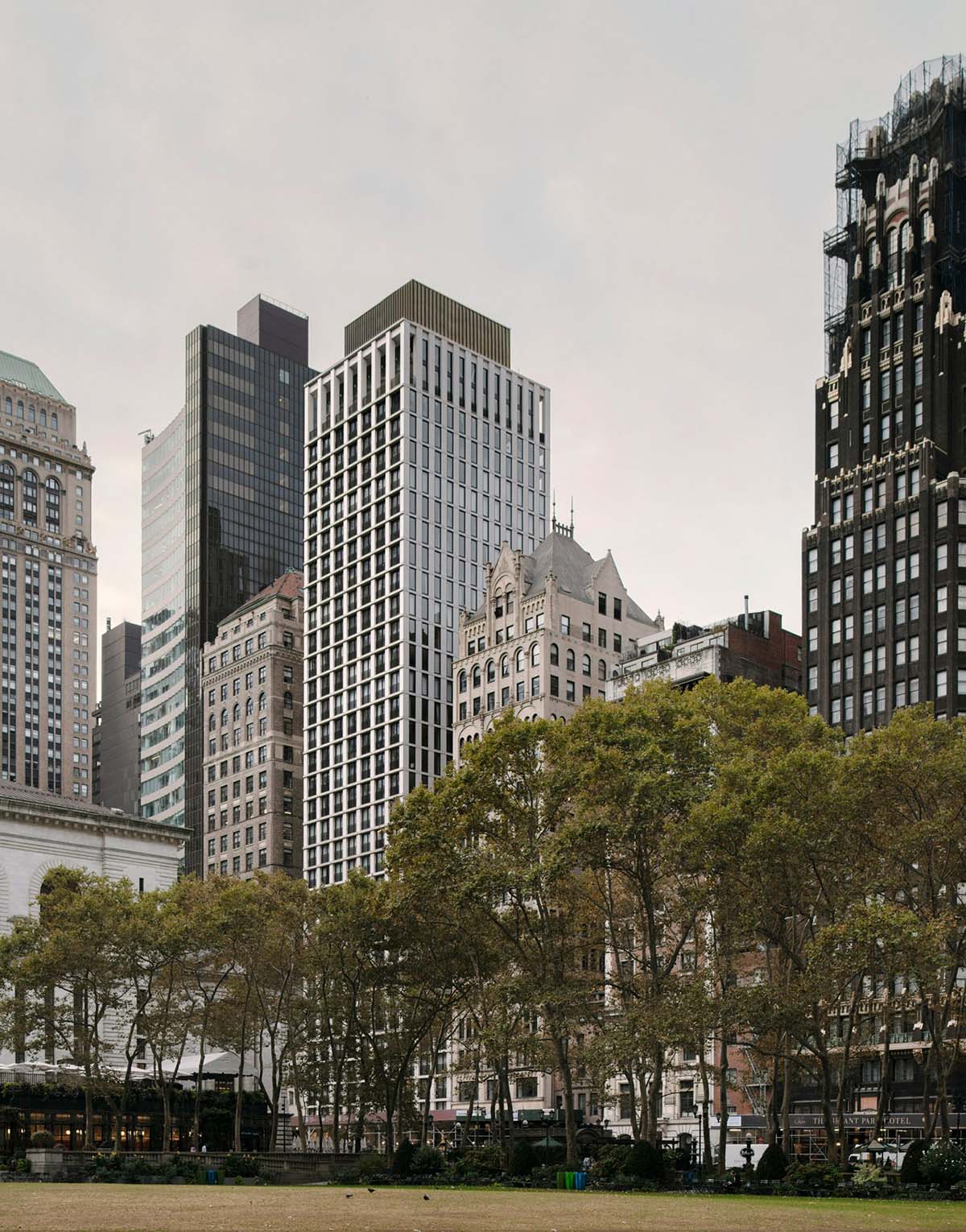 On the top of the building, the crown is recedded from the tower's layout and is established by double-height spaces, the studio designed two penthouses at the top of the tower.

Adhering to the conditions of the Landmarks Preservation Commission and for the façade design of the building they reinterpreted the historic facades nearby on the project. 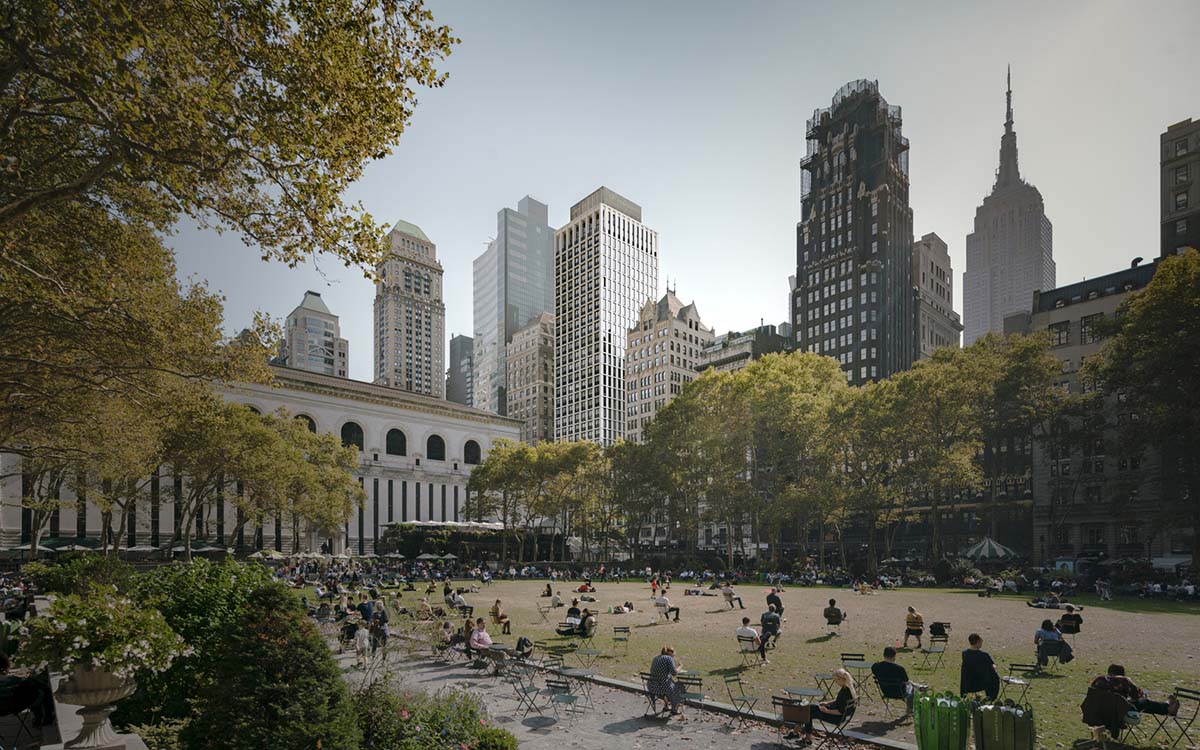 "These polished precast concrete slabs and columns follow a tectonic grid composition lending the building a classical appearance and firmly asserting its place within the streetscape."

"The concrete building structure extends into the interior of the residences, reinforcing a sense of architectural substance and identity," continued the studio. 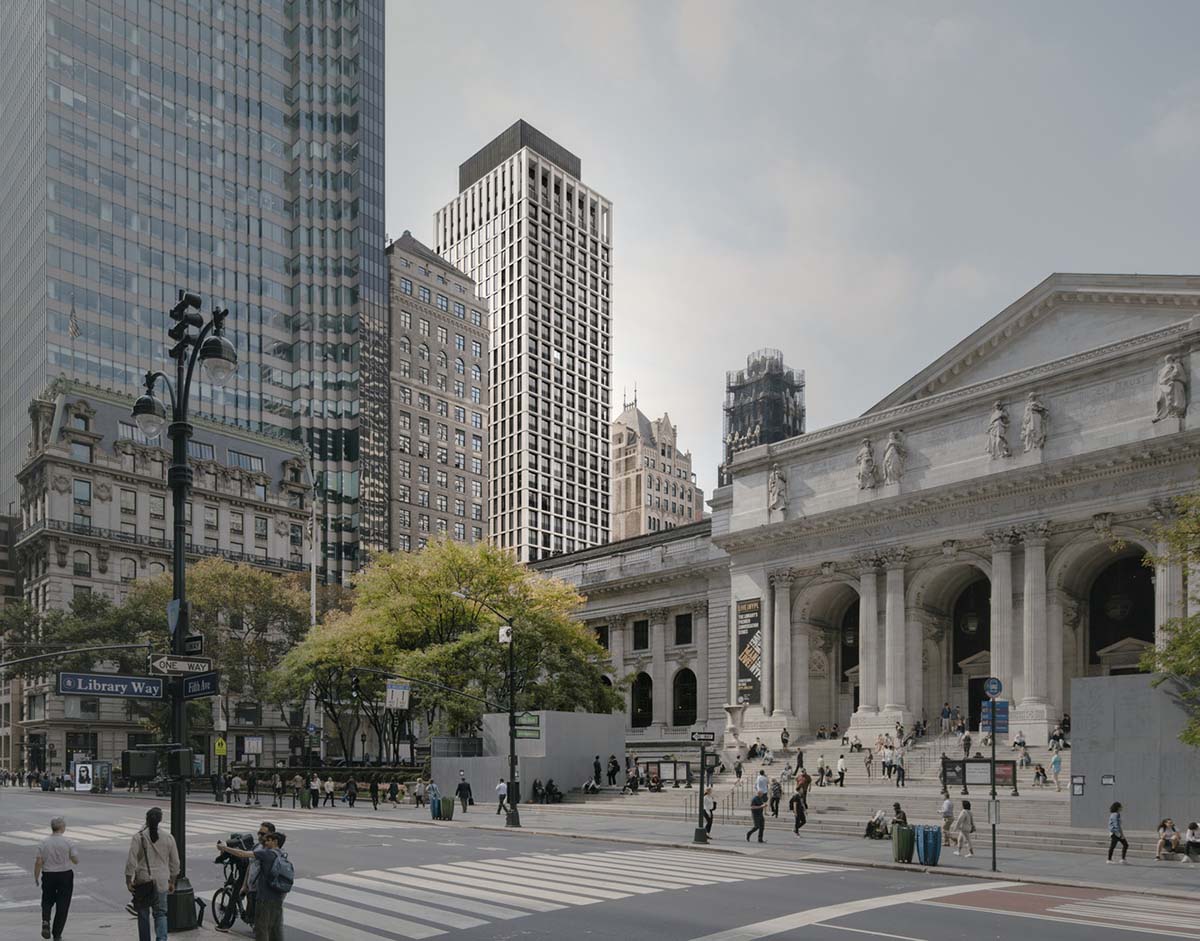 The studio used built-in furnishings to conceal storage spaces and appliances inside while dividing the spaces, removing the need for partition walls, and allowing uninterrupted views around the perimeter.

Floor-to-ceiling windows open on to Juliet balconies on the north and south façades for most of the residences, while the penthouses have double-height, colonnaded terraces with view over the city and park. 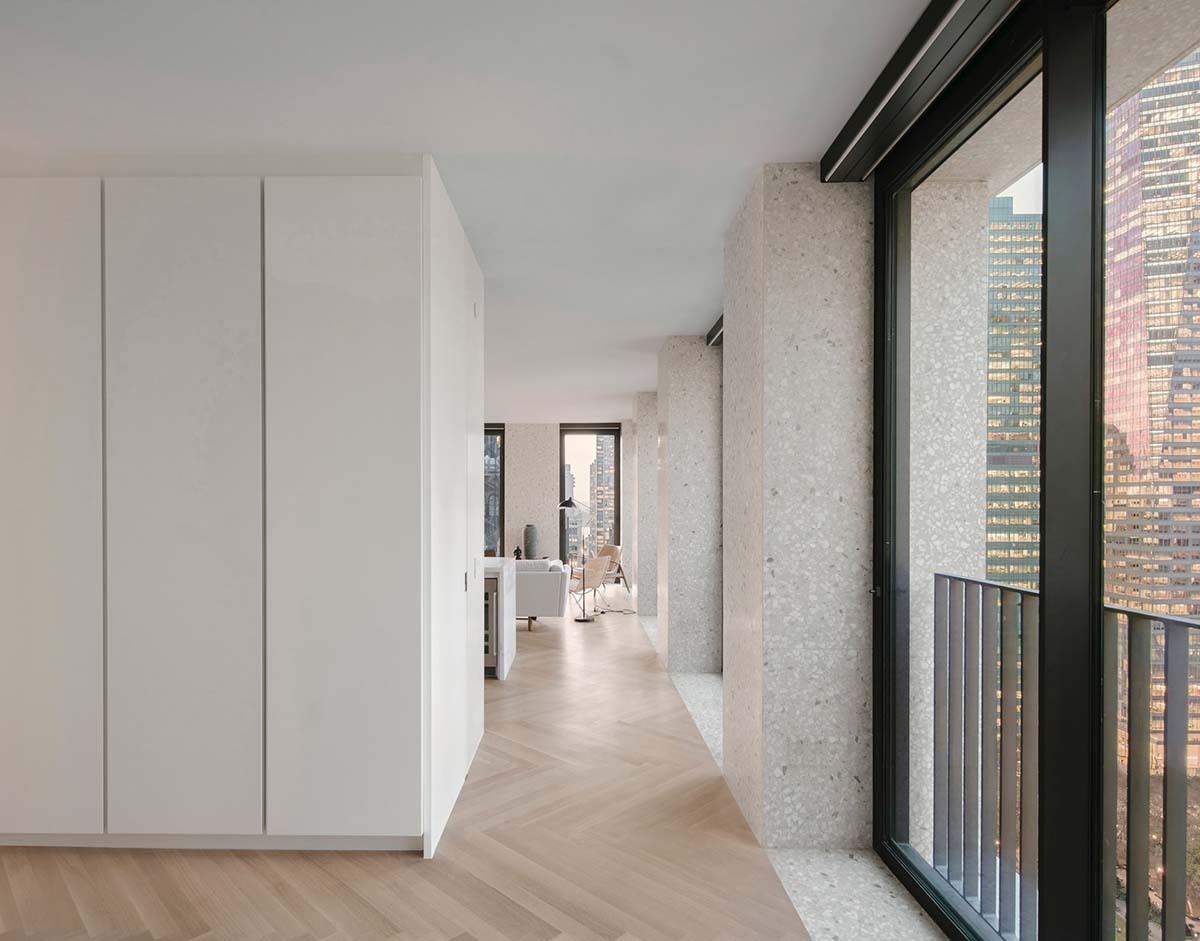 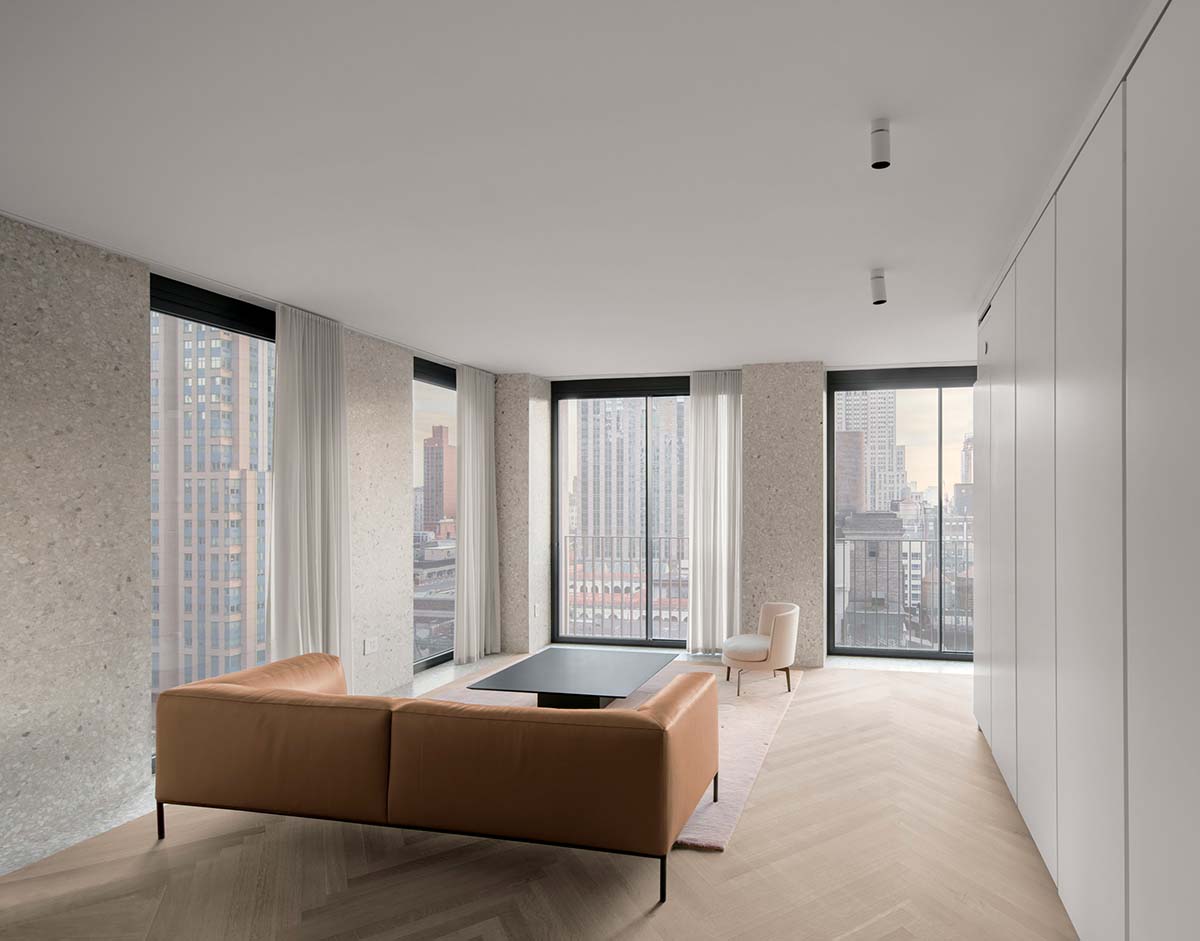 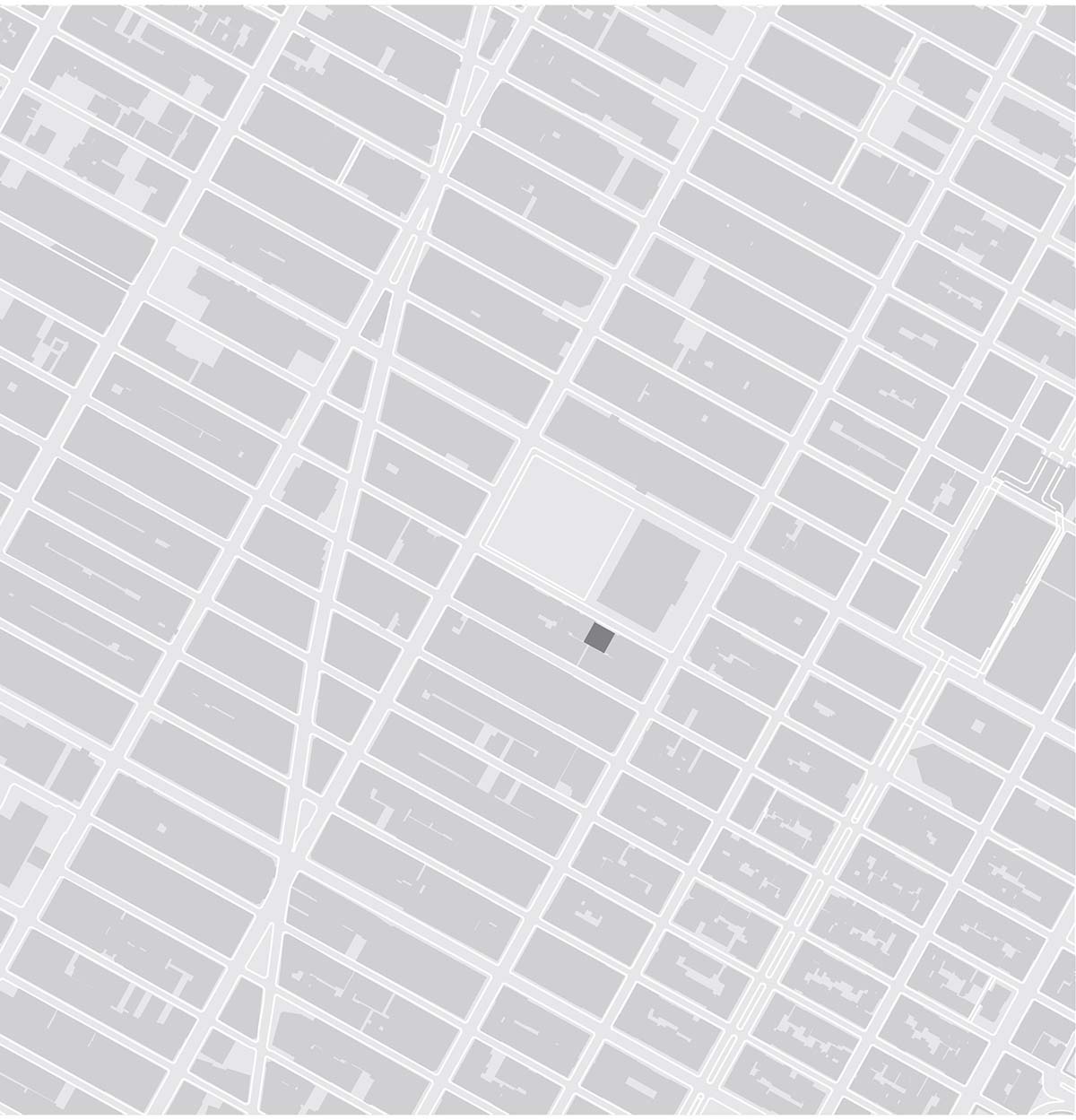 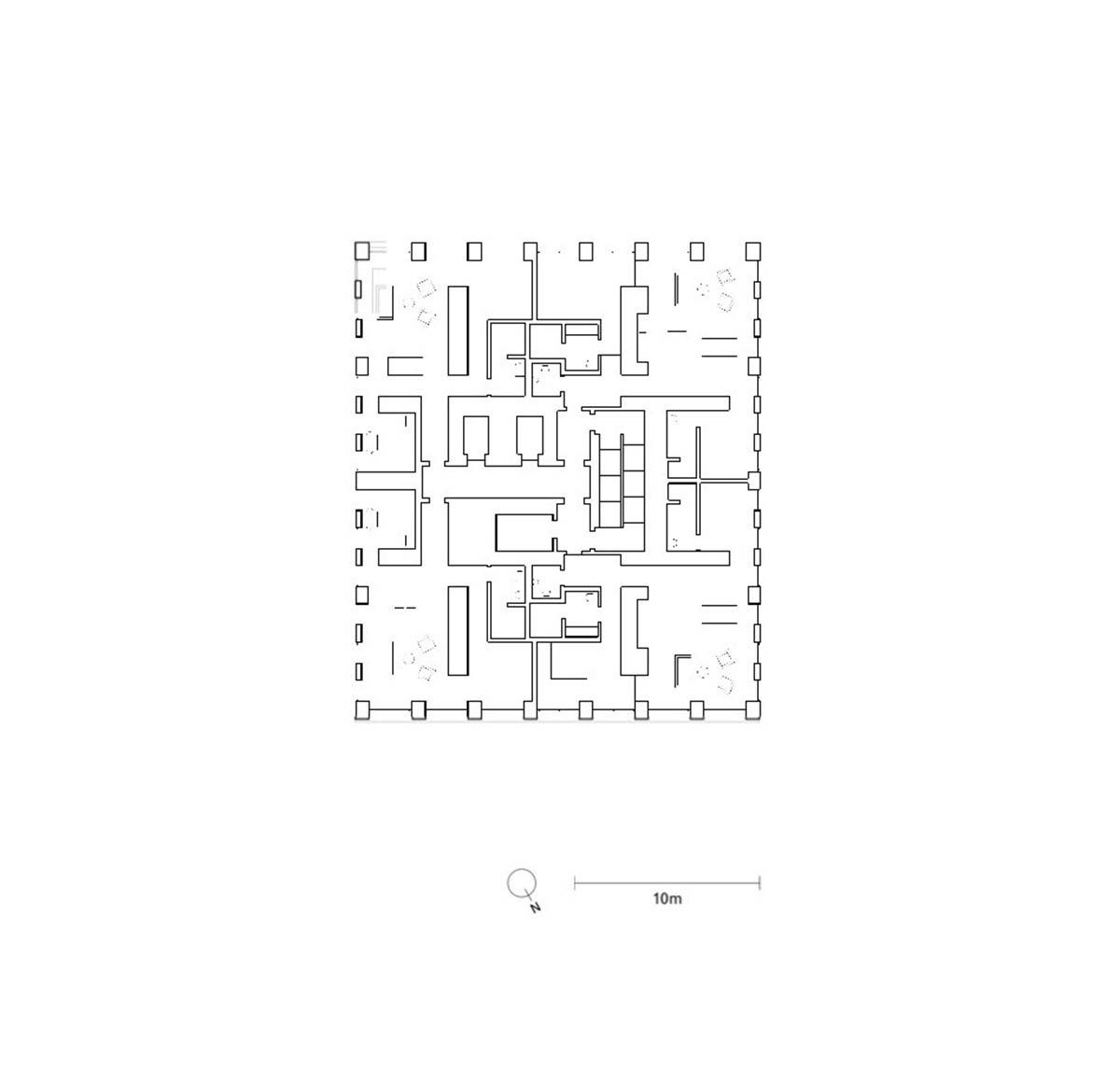 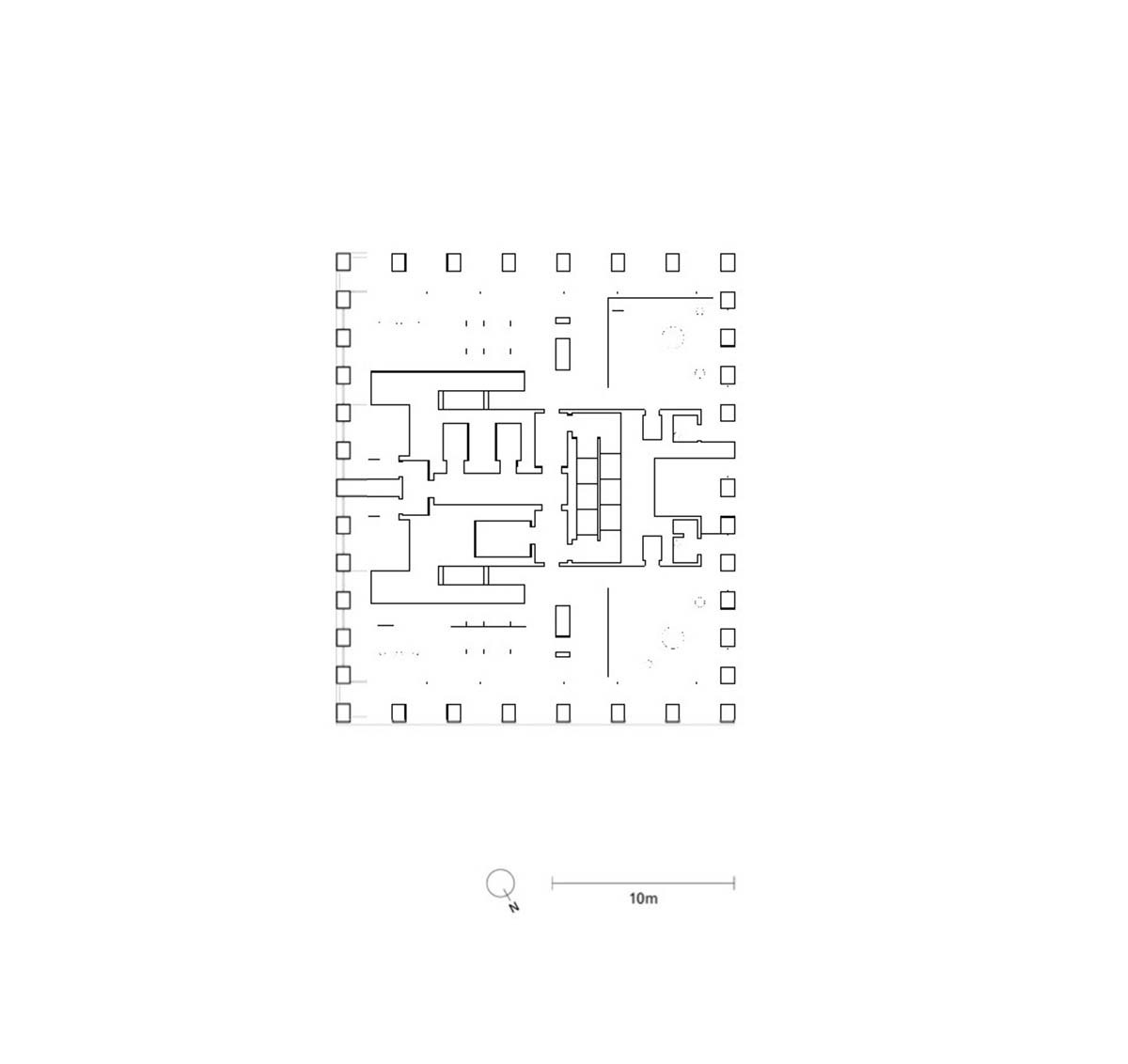 David Chipperfield Architects designed The Bryant for New York-based developer HFZ Capital Group. The project started in 2013 and completed in 2021.