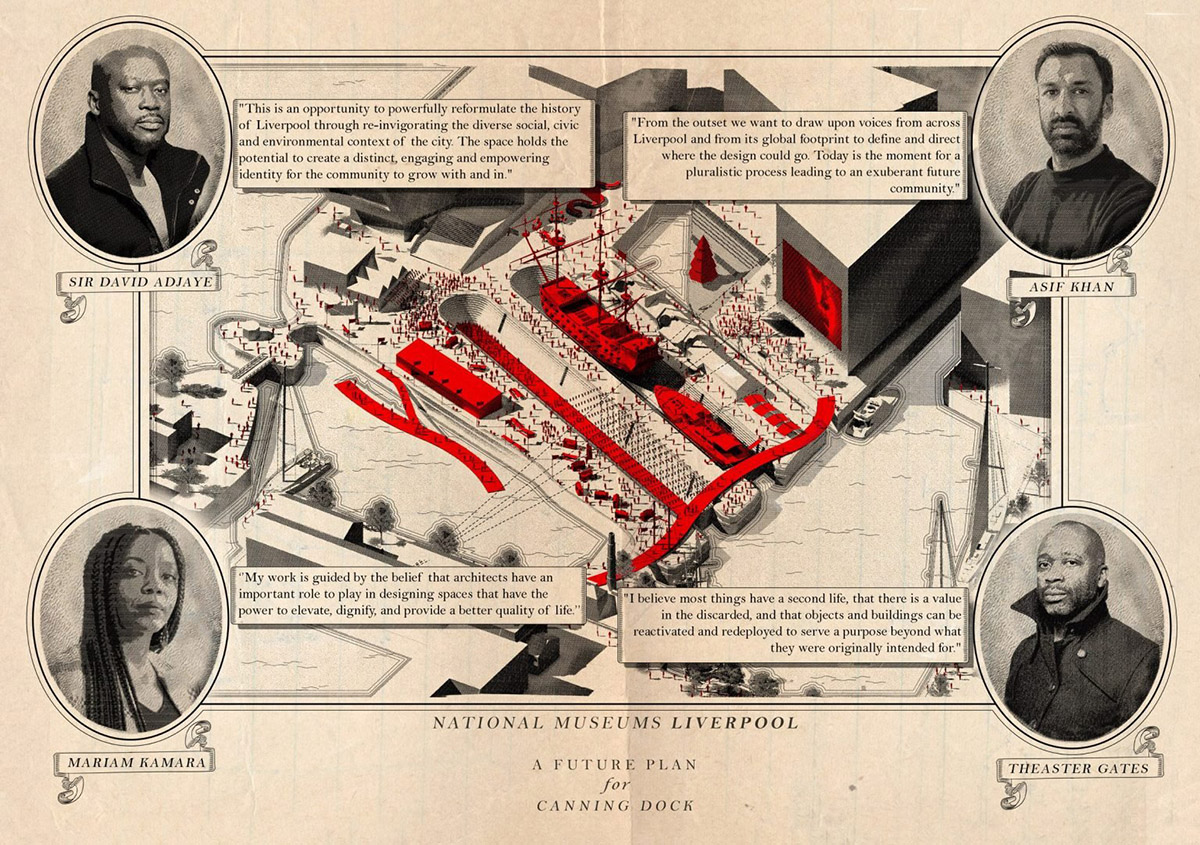 The team's proposal was selected from among six shortlisted international teams, including Arup, BIG, DSDHA, OMMX and Shedkm.

The winning team, together with Plan A Consultants, Prior + Partners, The Place Bureau, Hara Design Institute, AKTII, ARUP and Donald Insall Associates, will work the transformation of the Canning Dock Project that will create a public space. The area has an incredibly unique history, embedded with a rich and powerful heritage linked to the very roots of Liverpool’s port.

Set to be completed as "a landmark project", the starting point and highlight of this transformation will be the redevelopment of the Dr Martin Luther King Jr Building which will sit at the heart of the reinvigorated International Slavery Museum, which recently received £9.9m funding from The National Lottery Heritage Fund.

Offering "a dramatic new front door" for the International Slavery Museum, the front door will lead to spaces to explore and investigate the transatlantic slave trade and legacies.

The Canning Dock Competition is managed by Colander Associates and supported by £120,000 of funding from the Liverpool City Region Combined Authority (LCRCA), as part of their Race Equality Programme. 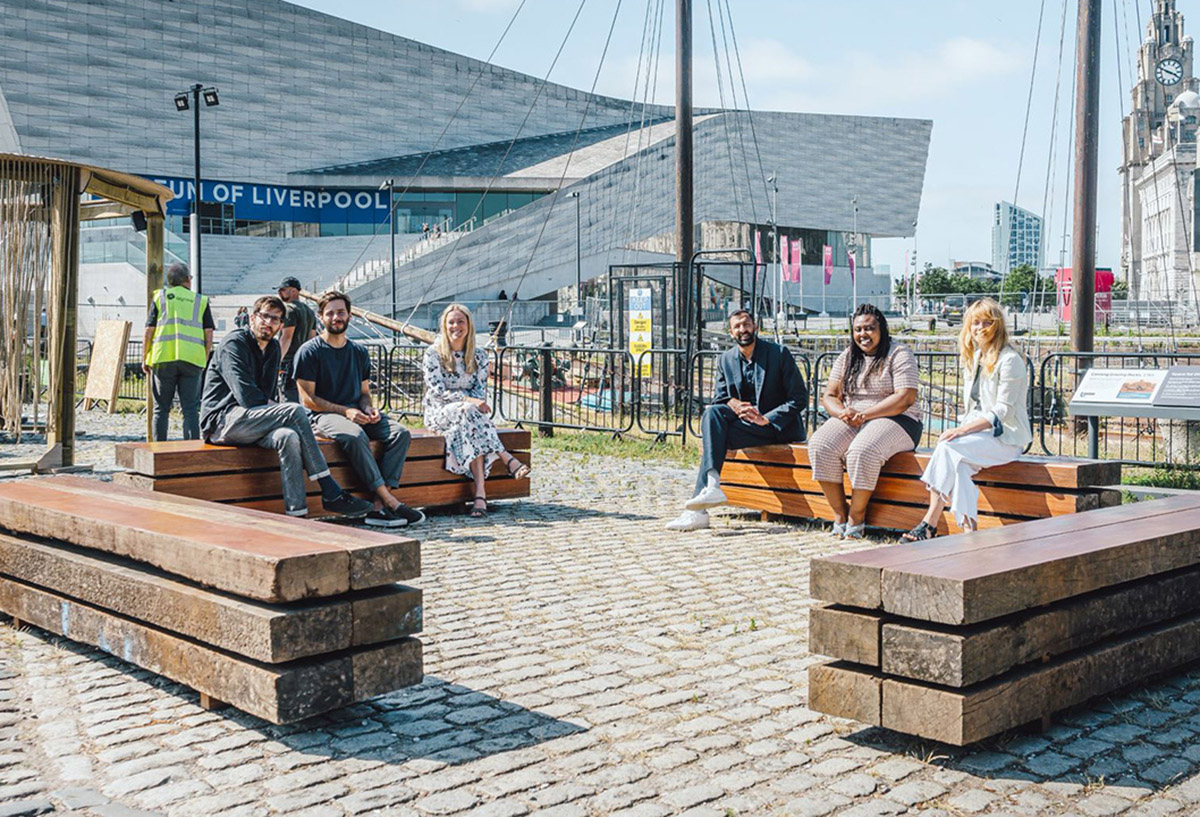 Team Asif Khan in the photograph above in Canning Dock. Image © photogwsmith

"History is like the ocean, with all its depths and treachery. Looking out from the shore, those waters feel like they belong to us, and yet the sea looks so different from where you stand in the world. History can wash things away one day and brings them back like ghost ships the next. Reconciling with history is how we grow as individuals, as communities, and – we believe – is what makes life and cities beautiful," said Asif Khan.

For National Museums Liverpool we have formed a different kind of design team – not simply to deliver a project, but to steward a significantly meaningful one into being. This new piece of history will welcome voices from across Liverpool and globally from the places and people connected with Canning Dock," Khan added.

"Our collaborative team composed of technical architects, planetary architects and an artist envisions the NML Waterfront Transformation as an opportunity to powerfully reformulate the history of Liverpool through re-invigorating the diverse social, civic and environmental context of the city," said David Adjaye.

"Recognising the history of the surrounding waterfront, connecting the region’s cultural infrastructure, and creating a space in which the public realm and public arts can connect, holds the potential to create a distinct, engaging, and empowering identity for the community to grow with and in," Adjaye added. Considering key landmarks, including the creation of pedestrian links to the Canning Dock, the winning team will bring a new life to multiple buildings within the area, based on the brief for the project.

"A primary focus of the transformation is to respond to the waterfront’s unique history – looking at ways to bring the history of the transatlantic slave trade more into the public realm through compelling yet sensitive designs - and ensuring Liverpool’s Black communities are engaged and represented throughout," said NML in a statement.

By designing new bridges spanning from the Pump House to Mann Island, the team will also transform the two dry docks into an educational and cultural experience, and animation of the water.

"The team identified in their submission that reconnection and accessible recreational routes will play a critical part in the development," added a statement.

They recognised "the different flows of people drawn from the city including the creative, cultural, knowledge, retail, and commercial quarters have all informed their response at site level."

As NML explains, "a site that was once used in the 18th century for fitting out, cleaning, and repairing ships, including those used in the transatlantic slave trade, needs to be approached with sensitivity – linking the past with the present."

Considering the historical traces of the past, the winning team's ideas and creative solutions will create a connection on the significance of this area "through a thoughtful and engaging response" to both the history of the site and its future potential. "The Canning Dock transformation is a chance to explore the power of architecture as a storytelling tool to bridge the gaps in knowledge that exist about the history of Liverpool as well as this significant site," said Mariam Kamara, founder of Atelier Masomi.

"The NML Waterfront Transformation is an opportunity to pull on the threads that make up the history of the transatlantic slave trade - from Africa, across the Atlantic to the US and back to Liverpool - to bridge gaps, to exhume memories and ultimately bring to the fore an exciting space for the public to explore and engage with the history of Liverpool while firmly facing towards the future," Kamara added.

"Commemoration and memorial making are some of the most important acts a nation can be involved in - especially commemoration around racial complexity and social ill," said Theaster Gates.

"Canning Dock represents one of the most important racialised sites in the UK and it gives me tremendous honour to work with this team to realise the complexity of the site."

"We hope that by using the tools of monument making and memorialising and commemoration, we will be able to do what many have not been able to do, which is to give emotional heft to the truth of slavery in the UK historically and the possibility for a site of re-emotionalising, healing, and processing those complexities. This will not be an easy journey, but we take the task with great humility and seriousness," Theaster Gates added.

NML will closely work with the design team "to build on strengths, respond to challenges and opportunities and be a catalyst for social improvements and creating space for people and communities."

NML highlighted that "this project allows the space to redefine its identity beyond its core role as NML’s arrival gateway, and something that benefits its many visitors."

The Design Competition was made possible by funding from Liverpool City Region Combined Authority. NML are working to secure funds to realise the project.

This includes a bid that was submitted by Liverpool City Council to the Government’s Levelling Up Fund to which the outcome will be announced this Autumn.