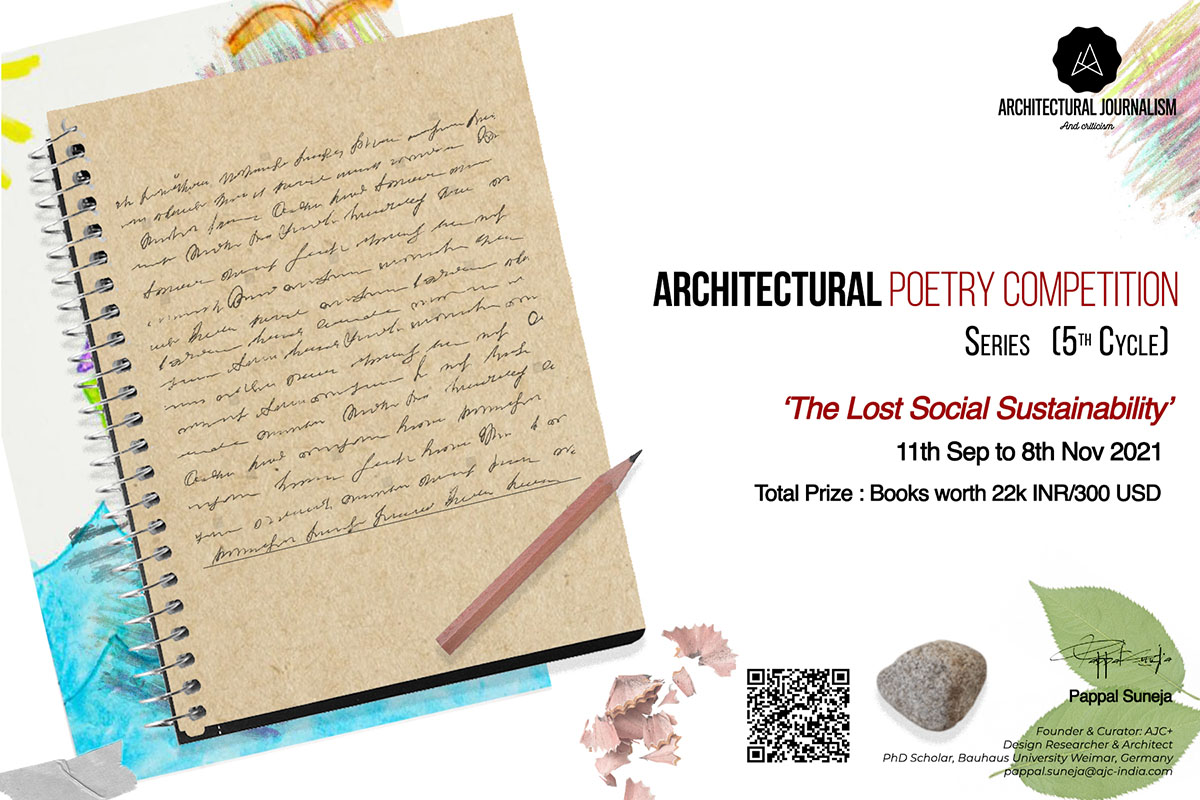 Architectural Poetry Competition Series, 5th Cycle is the eighteenth initiative of the Architectural Journalism & Criticism Organization founded by architect Pappal Suneja to spread awareness about this subject and sow the seeds of inspiration to explore and write about Architecture and allied fields from a lyrical perspective.

Theme for the Series in this cycle is 'The Lost Social Sustainability'.

Let us look back at the times when human beings started living in permanent settlements along with community members, depending on each other for survival. They worked on the same road, met at nearby temples, their women congregated at the community well or hand-pumps and their children played freely on streets, with no sense of harm as their grandmas sitting over verandah cots watched over them. All had a sense of ownership that was communal and they could quickly identify anti-social elements.

Now cars are seen all around, all day long, until the cities sleep. People want to get out of congested streets; there are those who are displaced in the name of redevelopment and rehabilitation. And then, there are those third kinds who move to the periphery to form gated enclaves, where physical barriers are high, allowing only incidental social exchanges. Those living in gated enclaves have higher living standards, but they live with a fear of being robbed or killed at any moment. As streets stay empty, neighbors remain strangers, kids do not play outside and grandma has nobody to talk to, neither her cot any space. The Architectural Poetry Cycle calls for an exploration into this lost realm of 'Social Sustainability' - a lost world.

We welcome poems from Collegians, Professionals, Academicians; Researchers & Design Enthusiasts (Open to All).

- Maximum 3 poems per poet are allowed.

- The poem may be accompanied by an Illustration/Photograph (optional).

- Each poem should not exceed 40 lines.

- The entry along with the registration screenshot should be sent to [email protected] with the subject line Architectural Poetry, 5th Cycle – (Category) in a word document with 12 pt., Arial font, single-line spacing

- The submission should be an original work of the entrant and will go through a plagiarism test.

- We will announce the winners in the last week of November 2021 on all our social media pages. 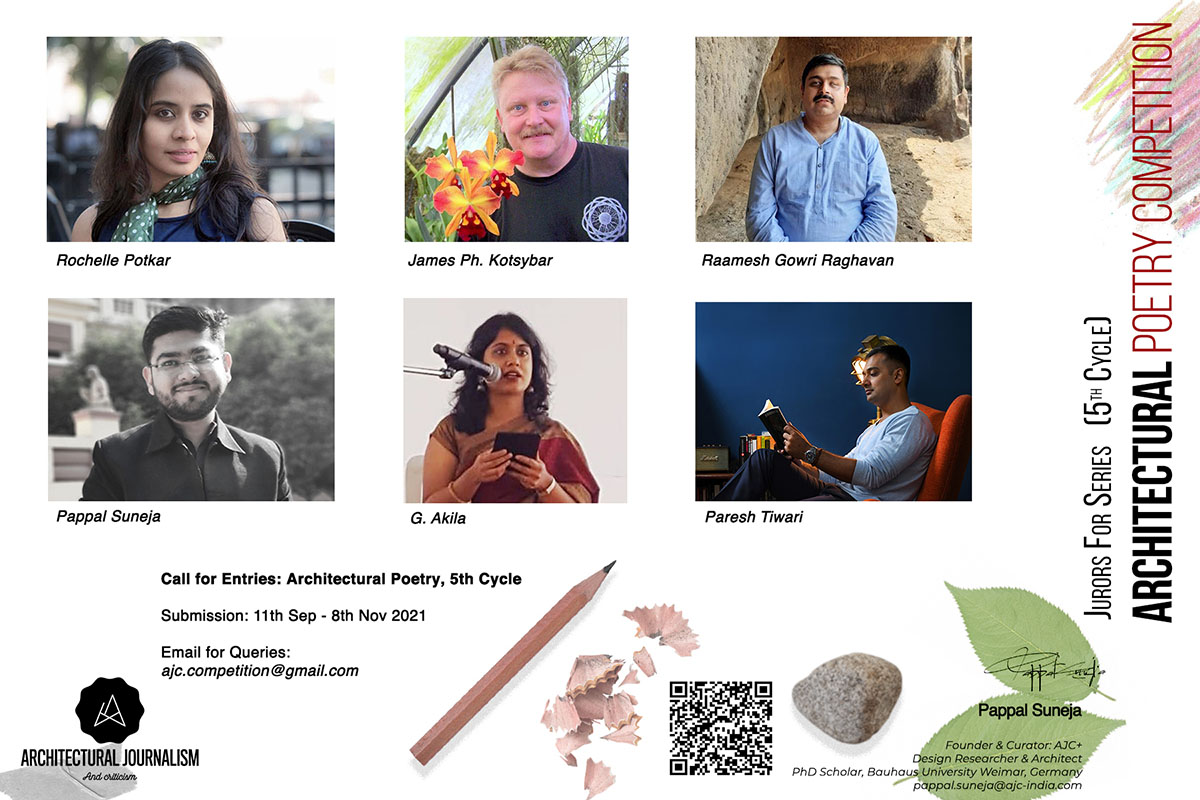 Jury Panel for the competition comprises:

Rochelle Potkar: She is the author of Four Degrees of Separation and Paper Asylum – shortlisted for the Rabindranath Tagore Literary Prize 2020. Her poetry film Skirt was showcased on Shonda Rhimes’ Shondaland. Her short story collection Bombay Hangovers has released (available via Amazon worldwide). Rochelle is an alumna of Iowa’s International Writing Program (2015) and a Charles Wallace Writer’s fellow, University of Stirling (2017).  She has read her poetry in India, Bali, Iowa, Macao, Stirling, Glasgow, Hongkong, Ukraine, Hungary, Bangladesh, and the Gold Coast.

James Ph. Kotsybar: He is the first poet whose words have reached another planet. NASA has placed his poetry into Martian orbit, aboard MAVEN in the mission log of the Hubble Space Telescope and awarded and featured it at IngenuityFest for the Centaur Rocket's 50th Anniversary. Invited by the president of the European Academy of Sciences, Arts and Letters, Kotsybar attended as a featured speaker of the EuroScience Open Forum (2018) and read his science poetry to scientists and journalists from all over Europe and to the Troubadours (Europe's oldest literary institution) in their founding city of Toulouse, earning a standing return invitation.

Pappal Suneja: He is a design researcher, an architect, an author and an explorer. He is the author of ‘Exploration of Architectural Journalism’, ‘Myriad Disciplines of Architectural Writing’ and ‘Revered Reminiscences’. Pappal is the founder and curator of the Architectural Journalism & Criticism Organisation, International Correspondent; Architecture-Design-Art Magazine, Studio Lead and Project Coordinator for Bauhaus Open Studios IN. Currently, He is pursuing Doctorate of Philosophy (Dr. Ing) from  Bauhaus University Weimar, Germany.

Akila G: She has presented her poetry at literature festival readings and TEDx. Her poems have found a home in reputed online and print anthologies; few of them are forthcoming. Her poems ‘Stains’ was shortlisted for the Womeninc Sakhi Award 2018 and ‘Graphite from a Traveller’s Notepad’ for the Glasshouse Poetry Festival Contest 2020.

Paresh Tiwari: A Pushcart Prize nominee, He has worked as an independent curator, editor and cartoonist. His work has appeared in several publications, including the anthology by Sahitya Akademi, titled ‘Modern English Poetry by Younger Indians’ released to celebrate 200 years of Indian English Poetry. ‘Raindrops chasing Raindrops’, his second collection of poetry was awarded the Touchstone Distinguished Books Award by the Haiku Society of America in the year 2017. Paresh has read his works at various literature festivals, cafés, theatres and galleries and has conducted haibun workshops at venues across India in an attempt to dismantle the boundaries that keep the various forms of poetry and literature from sharing the same spaces.

Raamesh Gowri Raghavan: He moonlights as an award-winning copywriter by day and daylights as an award-wanting poet by night, and sandwiches writing haiku, learning languages and peer counselling for suicide prevention. He has interests in tea, epigraphy, military archaeology, and ethno archaeology. He used to collect stamps as a child but has not grown up enough to give up on them. He thinks he is funny, but his friends vehemently disagree.

- Early Bird Registration till 30th Sep 2021, (500 INR for participants from India and 11 Euros for International Participants)

- Standard Registration till 6th Nov 2021, (650 INR for participants from India and 15 Euros for International Participants)

Winning Prizes for the Competition are:

Besides this, we shall send attested E-Certificates of Participation to all the entrants and the winning entries shall be featured on several web architectural portals. Also, the best entries shall be complied as an Anthology with ISBN No. after the successful run of all the cycles under this Series. For updates, Visit the Facebook and Instagram handle of the organisation.