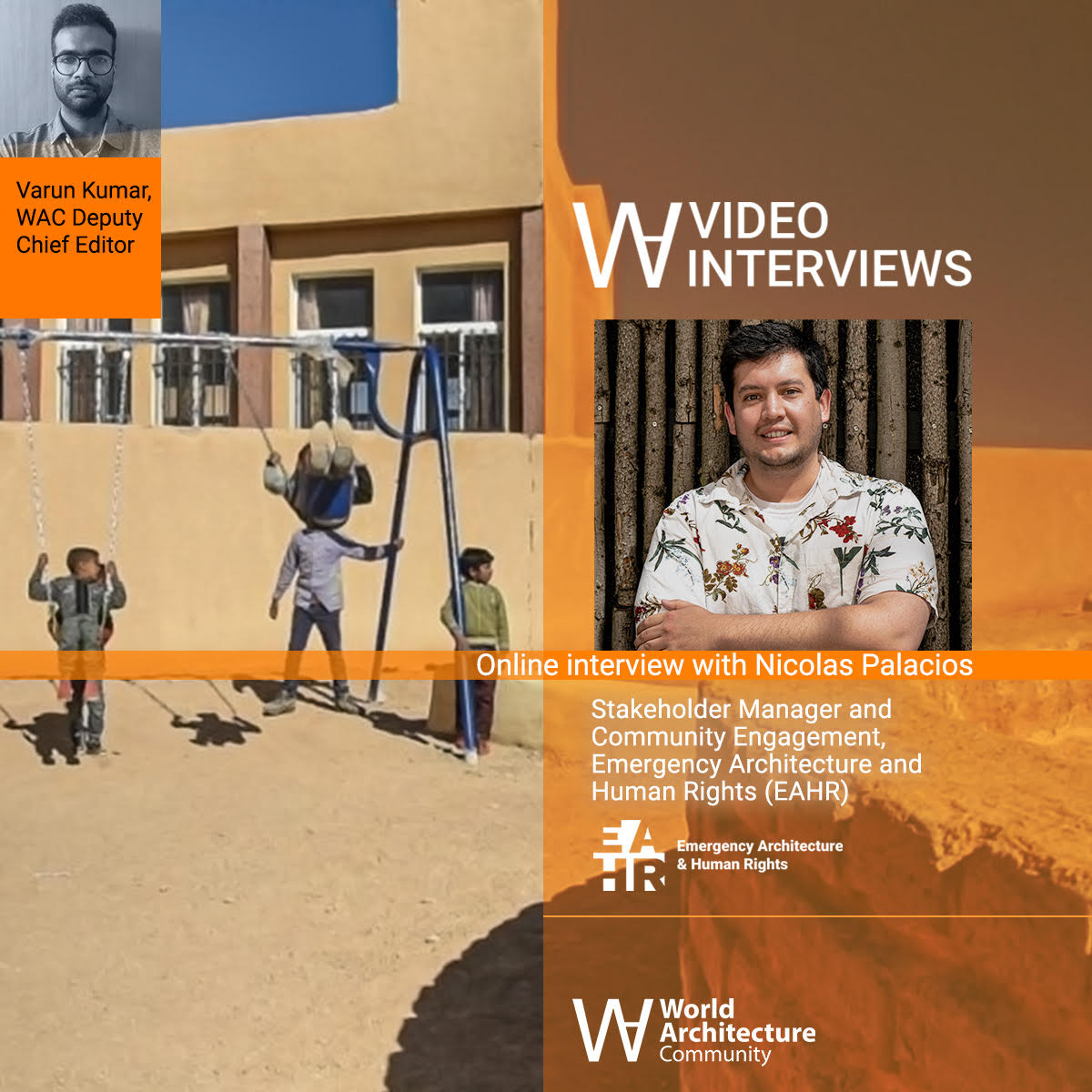 "Architecture is a powerful tool that can make incredible things. It has a lot of transformative power," according to Nicolás Palacios, who is currently working in Emergency Architecture & Human Rights (EAHR), a non-profit organisation founded in 2015 and based in Copenhagen, Denmark.

"Tools can also be used to reproduce or perpetuate hegemonic positions. I think, sometimes, we have to be critical about the practices that we take."

"I believe that architecture, for example, modernism had a very strong message behind, but it works as a cautionary tale to tell us what happens when we don’t resend the grassroots of the people who are inhabiting the cities," says Nicolás Palacios.

Originally from Chile, urban researcher and political scientist Nicolás has involved in different projects through the last year in EAHR by working with different disciplines. Taking part in several international research projects, he has also held positions in the private sector and consultancy in different academic and non-academic environments.

Speaking to WAC's deputy chief editor Varun Kumar in an exclusive video interview as part of WAC's Video Interview Series, Nicolás shares his thoughts on how architecture and its related fields can contribute to the welfare of the society in a larger context.

In this 30-minute interview, Nicolás Palacios discusses the scope of his works, mission and research projects in EAHR, shares his suggestions to increase engagement in architecture projects for social welfare and explains details about the mission, projects and the team of EAHR. Moreover, he also gives details about how the EAHR started to work since it was founded in 2015.

"When it was founded in 2015, the focus of the organization was activation of empty buildings and urban spaces in depopulated areas, and with the organization's first grant, the EAHR focused on the integration and placement of refugees by working with municipalities and local developments," explains Nicolás Palacios.

Currently residing in Copenhagen, Nicolás is passionate about urban phenomena, particularly about the transformative and complex dimensions of public space, advocating for an interdisciplinary approach to urban dimensions.

With a Master’s Degree in human geography from the Lund University, he holds an undergraduate degree in political science and urban studies from the Pontifical Catholic University of Chile. During the interview, he briefly touches upon the understanding of "Emergency Architecture" in the EAHR in accordance with the development of sustainable goals, sustainable cities, education and human settlements.

EAHR's primary focus on education and the youth

"We believe that creating conditions in the built environment for the youth to feel safe at that place which is something that is better relevant." 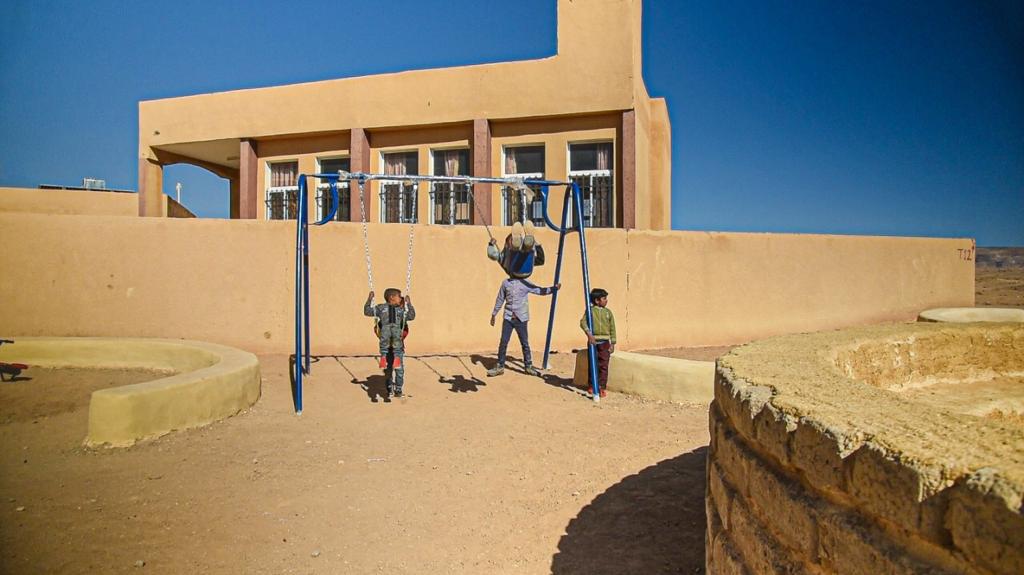 Radice Playground in Abasyeh: This multi-use public space aims to be appropriated by the community not only through use of the infrastructure, but by counting with their participation in the development and building processes, and by having flexible features which can be used and adapted to the discretion of the users. Image © Rajiv Raman

Talking about the target areas and project typologies of EAHR, he elaborates that the intentions and objectives of the projects of EAHR are also important and the EAHR's projects comprise schools, classrooms in refugee camps and playgrounds.

"We believe that there is a very important role to generate these spaces and if we can ensure them to have a space actually dedicated to their needs, there can become more active members of the community in that area, and if these spaces can be open to multiple uses, that is the most important part of the project for us," he adds. 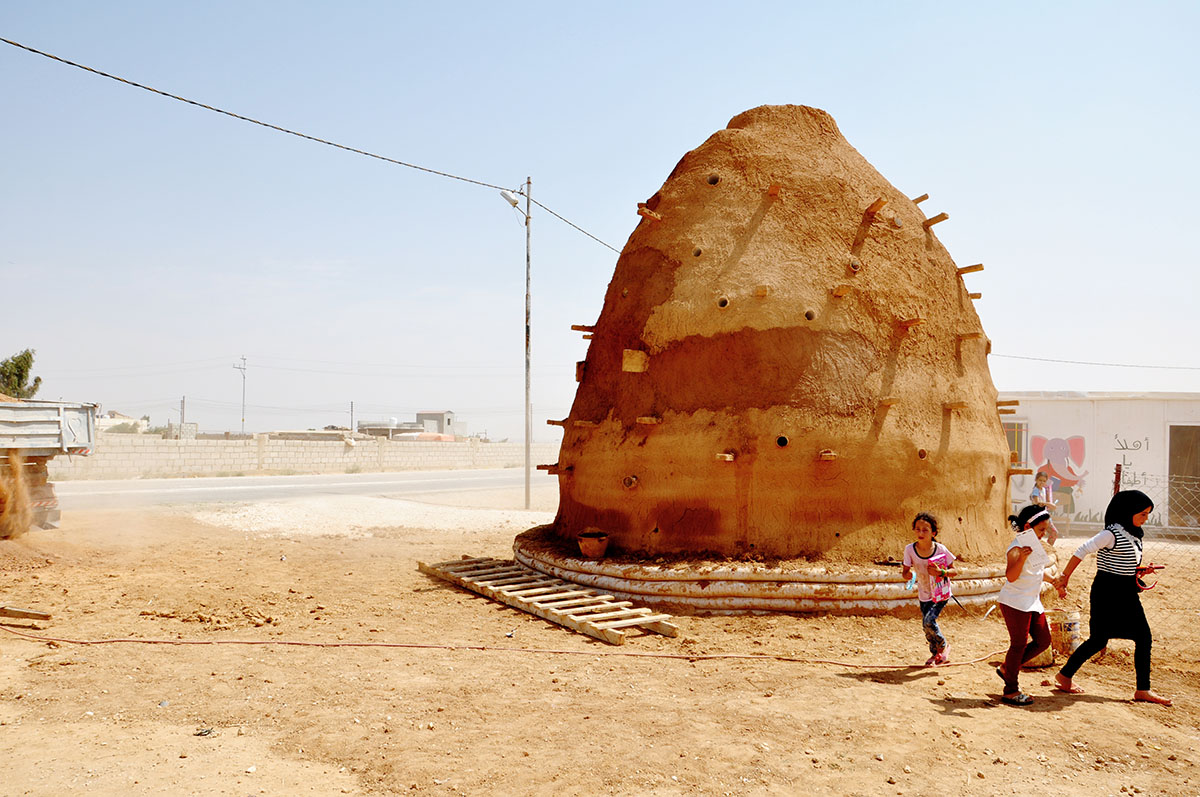 Za’atari Classrom in Jordan: EAHR formed a collaboration Acting for Change Jordan, a local NGO. Working together with the local community, an extension to the existing school in Za’atari was implemented. Image © Emergency Architecture and Human Rights

Nicolas also talks about the advantages of the integration of knowledges of different disciplines to architecture and urban planning.

"To encourage architectural practices, I can say that it is important to have other sectors of knowledge, especially having knowledge in the social sciences," he explains. 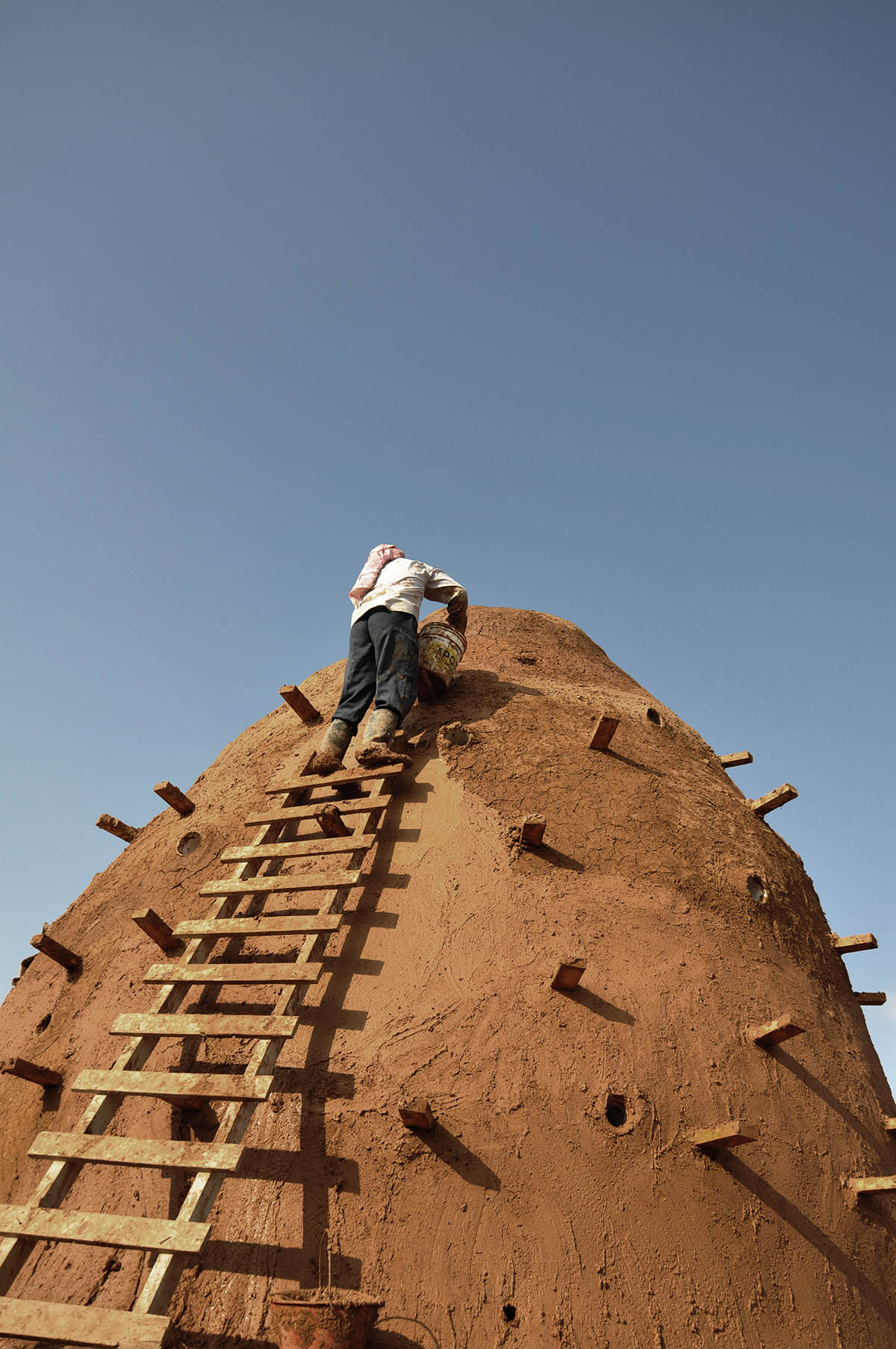 Za’atari Classrom in Jordan. EAHR's aim is to increase the number of students with access to education within the surrounding area. Image © Emergency Architecture and Human Rights

"There is a rich longstanding tradition in social sciences in addressing community issues, in addressing the base or also in order to trying to find out which issues are behind the things we see."

"I think architectural planning in general can really learn and co-operate with other areas of knowledge."

"I think it is a critical aspect even if it is a private practice when you are designing a building, is very important to understand the surroundings in what you are doing," Nicolás Palacios emphasizes. Radice Playground in Abasyeh: The village of Abasyeh - southern Jordan - is one of the many settlements where Bedouin communities dwell, where their everyday unravels now far from the nomadic lifestyle, but still deeply and inherently connected to the desert. The project presents rounded elements build with two different techniques, SuperAdobe and Earth Bricks, that the community is building together with EAHR partner AVSI. Image © Rajiv Raman

"Each project should not only response to the built environment, but also to the cultural aspects of the region"

Explaining details on how the organization is working on a specific project, he stresses that working with local partners is the key factor for each project.

"We are working with local partners that have deep roots in the sector."

"The important thing is that when we come with a new project, that project should response to not just to the built environment, but also to the cultural aspects of the region or area we develop for the project," he continues. 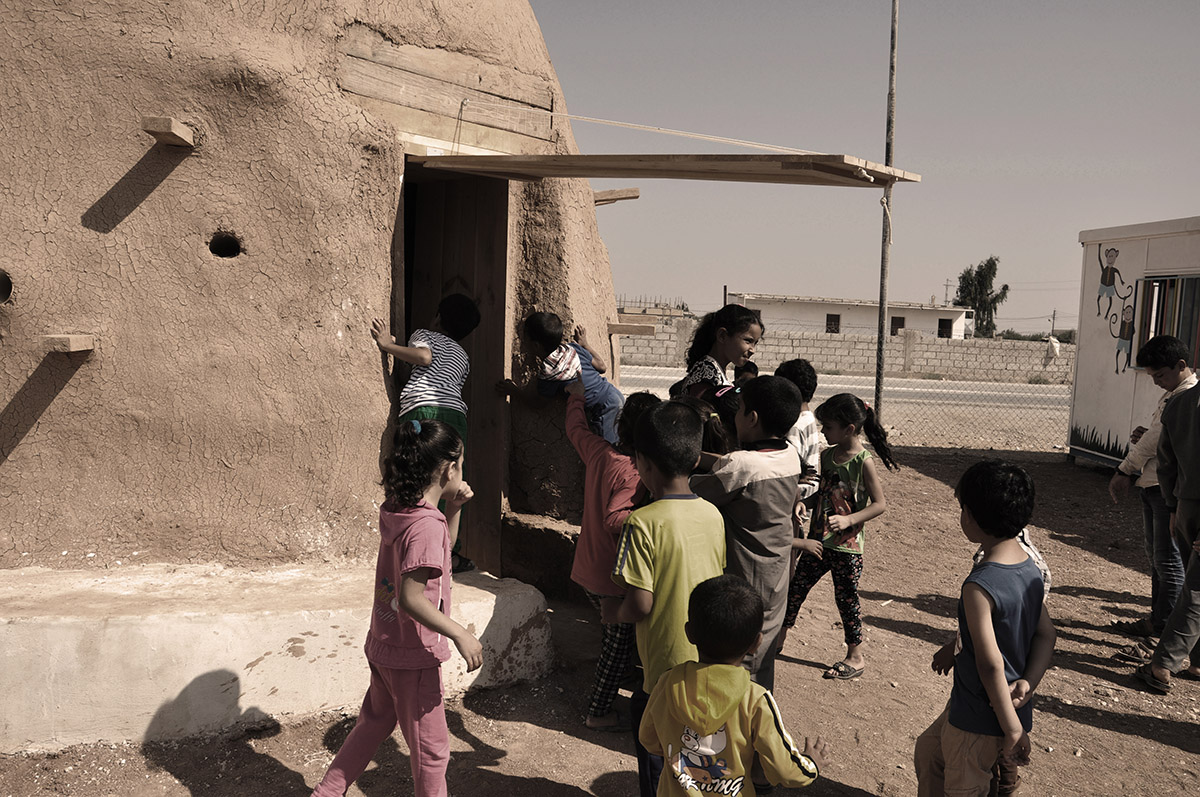 Za’atari Classrom in Jordan. The school is used by children in the morning and by adults during the afternoon, who will use the space to learn reading and writing skills. Image © Emergency Architecture and Human Rights

"I think architecture, politics, or economy or any other profession or approach responses to a wider context. I think that architecture deals with mundane, with the everyday life of people and the built environment," adds Nicolás Palacios.

"So all of these are in its core and it’s a social practice."

"Nowadays, there is also a constant influx of new social science researchers are getting into architecture or urban planning - which is becoming maybe a more stronger, more conscious and more complete practice as well."

Kisipide Community Centre, Nepal. EAHR's project in Kisipide in collaboration with Lumanti Support Group for Shelters is finally complete! After completing the main structure in December 2019 with EAHR's presence on field, the community of Kisipide with EAHR support from remote and a local engineer part of Lumanti's team succeeded with the realization of a wood and polycarbonate roof. Image © Lumanti Group For Shelter

The organization's activities span from the development of community platforms for citizen involvement, innovative and resource-efficient building methods, to teaching architecture and the interactions of the social and the built environment.

EAHR is committed to contributing towards the achievement of the Sustainable Development Goals (SDG), focusing their work on providing spaces that enable education for everyone, while aiming to create sustainable cities and communities.