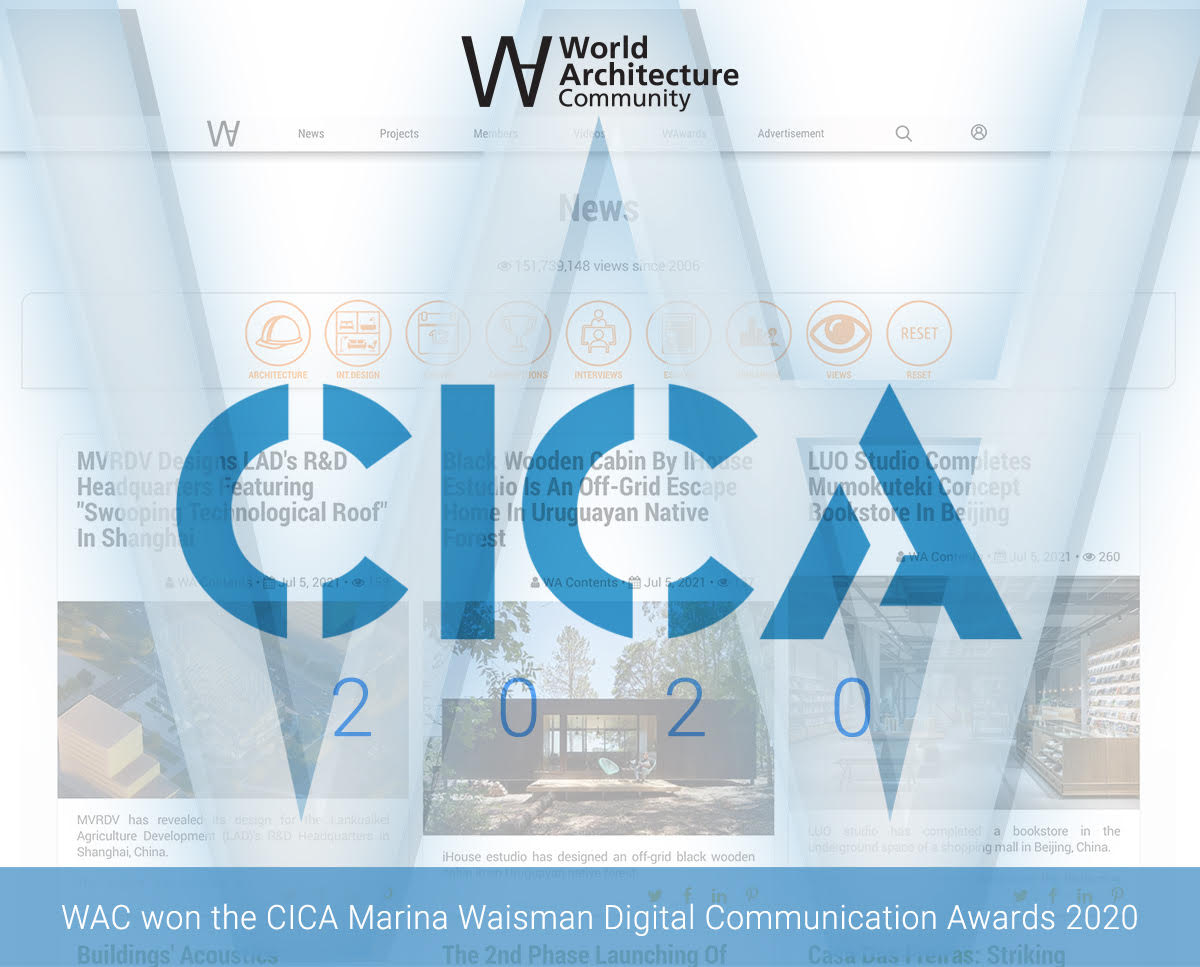 World Architecture Community has been named as the winner of the 2020 Marina Waisman CICA Digital Communication Award at Dennis Sharp CICA Awards for Architectural Criticism 2020.

The prestigious CICA Awards believes that architectural criticism has a wider and broader role apart from its bureaucratic restrictions and should encourage new forms of creativity in journalism. The CICA Dennis Sharp Publication Awards are given every three years, recognizing successful texts, essays, exhibitions and books.

"WAC has and undaunted ambition to bring together the global community"

Adding the Marina Waisman CICA Digital Communication Award category for the first time as exemplary forms of digital communication this year, "the website has an undaunted ambition to bring together the global community through World Architecture Community, with the chief editor Berrin Chatzi Chousein," said Prof. Wilfried Wang, Chair of the International Jury.

"Bauhaus: Building the New Artist", curated by Maristella Casciato, Gary Fox and Katherine Rochester, and hosted by the Getty Research Institute, has been named as the winner in the same category.

"The Architect’s Newspaper is one an exemplary online news format with dense coverage, and "Viceversa" is an eminently readable and reflective source of architectural thinking," Wang continued.

The international jury comprised of Wilfried Wang - Chair, Germany/USA, Fernando Diez from Argentina, Karen Eicker from South Africa, Louise Noelle Gras from Mexico, Suha Ozkan from Turkey, Xing Ruan from China/Australia and Joseph Rykwert from USA/UK. Trenton A. Sexton (USA) is the Assistant to the Jury.

The award ceremony is free and open to the public, places are limited to 300 people.

The first major CICA book award was given to Prof Manfredi Nicoletti for his book L’Architettura delle Caverne (Laterza).

Lastly, "Marina Waisman CICA Digital Communication Award”, given for non-print media and publications, which was added for the first time this year as a new category to the CICA Awards, aims to "expand the awards beyond the traditional three categories of books, exhibition catalogues and journal articles, discovering exemplary forms of digital communication."

Being an effective and growing community-led architecture website, World Architecture Community was recogzined for its significant mission, bringing architects, interiors designers and students from all over the world in various forms in the website.

Since founded in 2006, the main differentiator of WAC is to have its membership business model and allow its members to showcase themselves and their projects in various forms on the website.

All members are able to publish their projects freely, participate in the WA Awards 10+5+X, showcase their offices, with links and description in dedicated pages, which are all described as a self-fulfilling prophecy realized by WAC's community efforts.

Having over 36,000 registered members, and with 2,000,000 million unique visitors and 6,700,000 page views, plus with a significant reach over its social media with over 1,000,000 million followers, World Architecture Community is one of the most powerful websites in the architecture world.

Given the very large number of submissions in all categories, the Jury decided to recognize the outstanding quality with a larger number of prizes and honourable mentions than in the previous awards.

Scroll down to see the Winners and Honourable Mentions of CICA Dennis Sharp Publication Awards 2020:

Vassalo, Jesus
Epics in the Everyday: Photography, Architecture, and the Problem of Realism
Park Books, Zurich 2020.