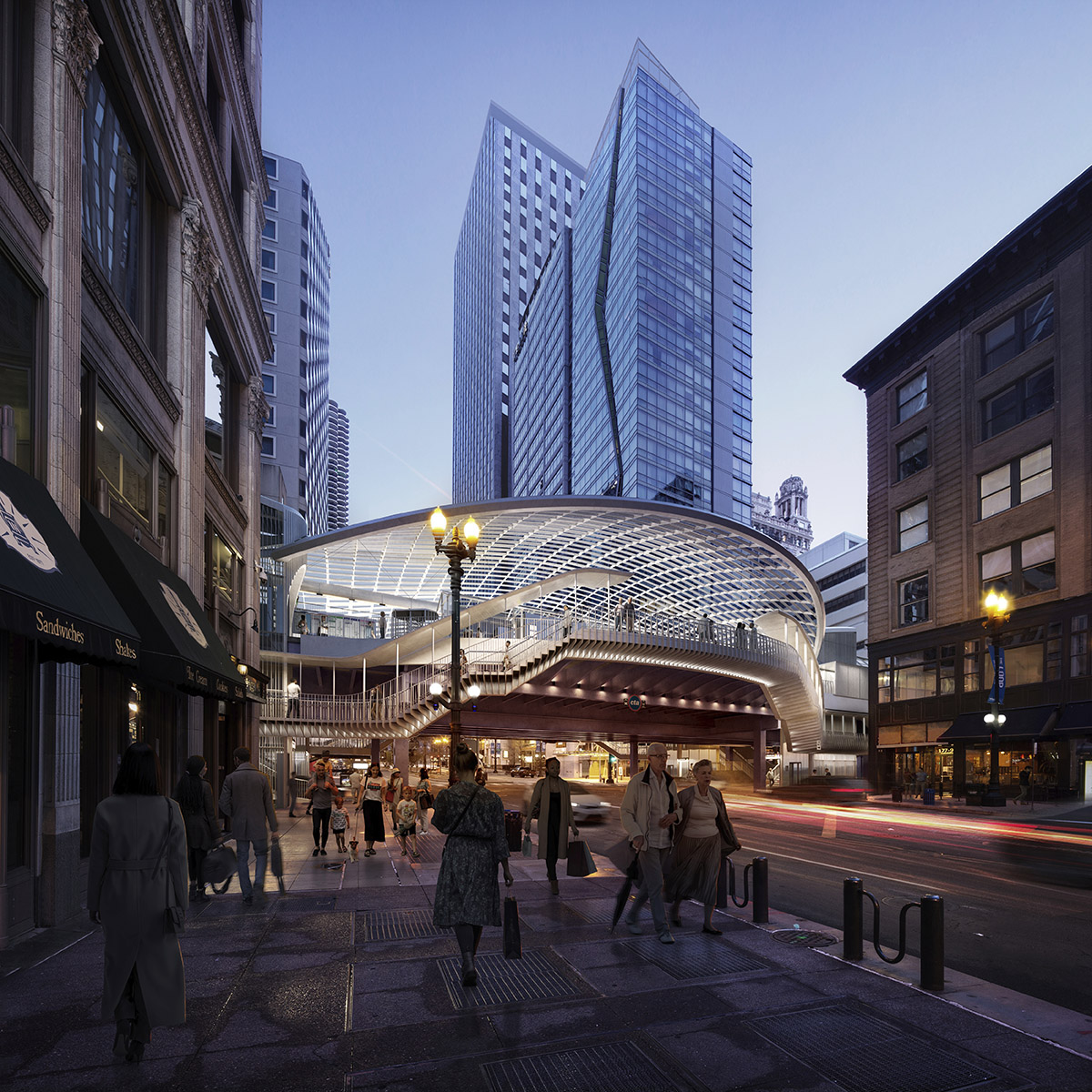 Led by SOM, TranSystems and a diverse local consultant team with expertise in transit and historic preservation, the new State/Lake Station will have wider safer platforms with a sweeping glass canopy that will protect passengers from the elements, a new accessible fly-over connection bridge, new elevators for riders of all mobilities to the elevated and Red Line platforms, and street level enhancements. 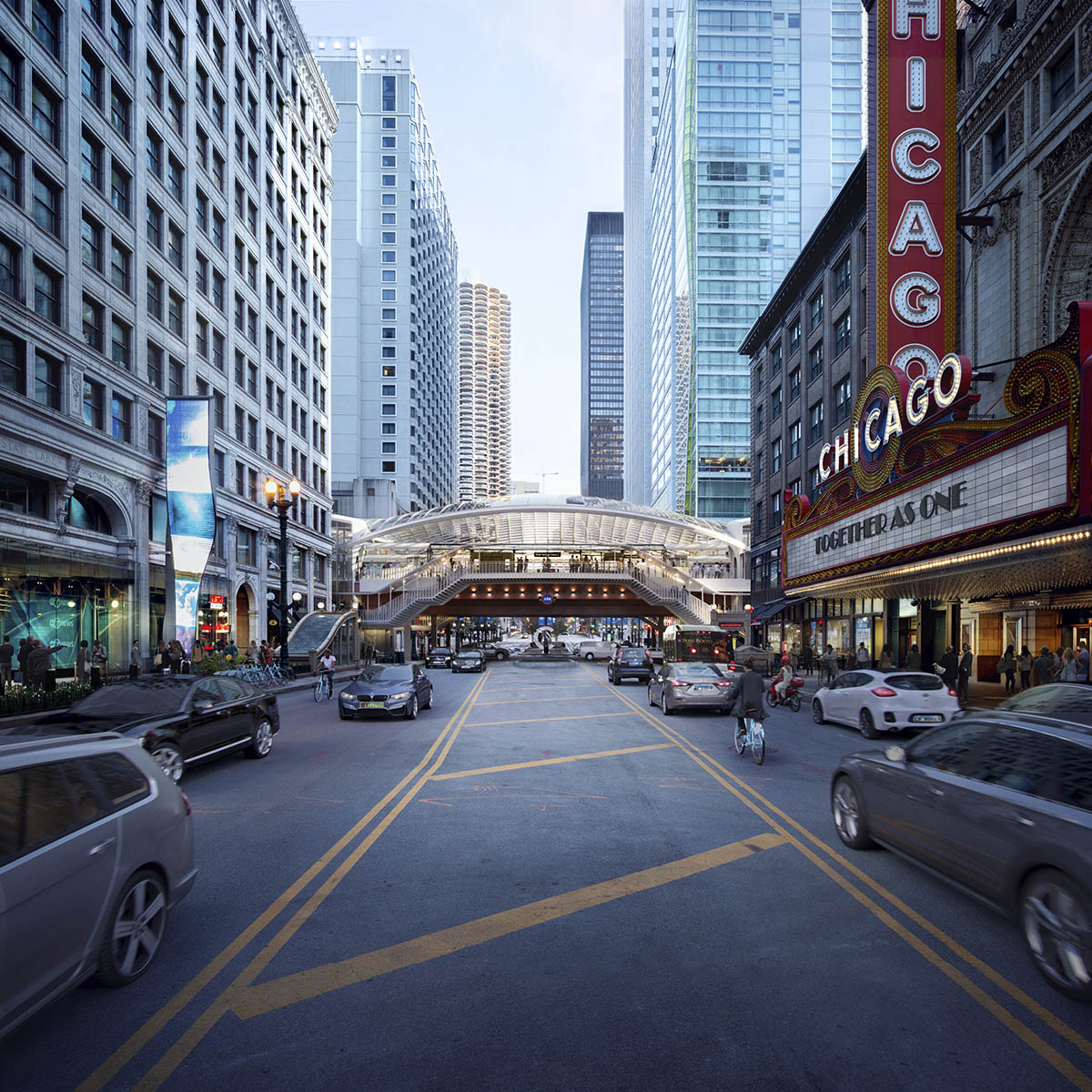 The station is known as the second busiest in the CTA network, located at a vital junction within the Chicago Loop and serving six of Chicago’s eight train lines, with further connections to pedestrian and bus routes.

Offering various improvements on the station's structural design, the new design will open up the intersection below and be removing obstructive columns, while enhancing safety for pedestrian and vehicle traffic along State Street.

The new design will also include street-level lighting upgrades, wider street corners, an improved pedestrian crossing and an accessible connection to the plaza to the north.

"The new State/Lake station will be a gateway to downtown for Chicagoans and visitors alike," said Scott Duncan, SOM Design Partner.

"As one of the most visible stations in the CTA network, the design is reflective of both its location and the needs of riders, with a soaring glass canopy, comfortable spaces for passengers, and fully integrated accessible design for riders of all mobility levels."

The new glass canopy is covered by a bird friendly frit pattern to provide shading in the summer and is aimed to protect the structure from harsh Chicago winds in the winter while allowing ample daylight into the station. 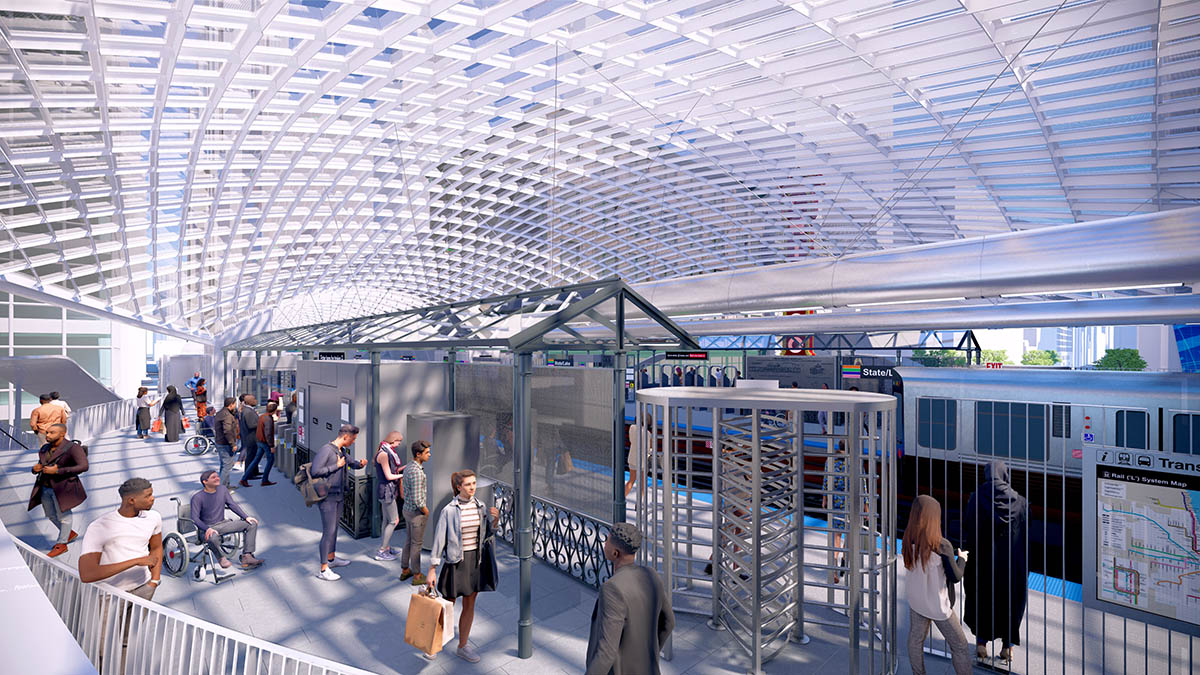 As SOM explains, "the transparency and lightness of the structure draws upon Chicago’s history of structural innovation, from bascule bridges and early skyscrapers, to the John Hancock Center and Willis Tower."

The new structure is also highly structurally efficient and designed to minimize obstructions to provide expanded views of the Chicago Theatre marquee, adjacent historical buildings and architectural landmarks along the State Street corridor.

The team uses historic materials from the existing station and functionally integrate the materials into the new design along with other educational elements to provide a connection to the past and the future. 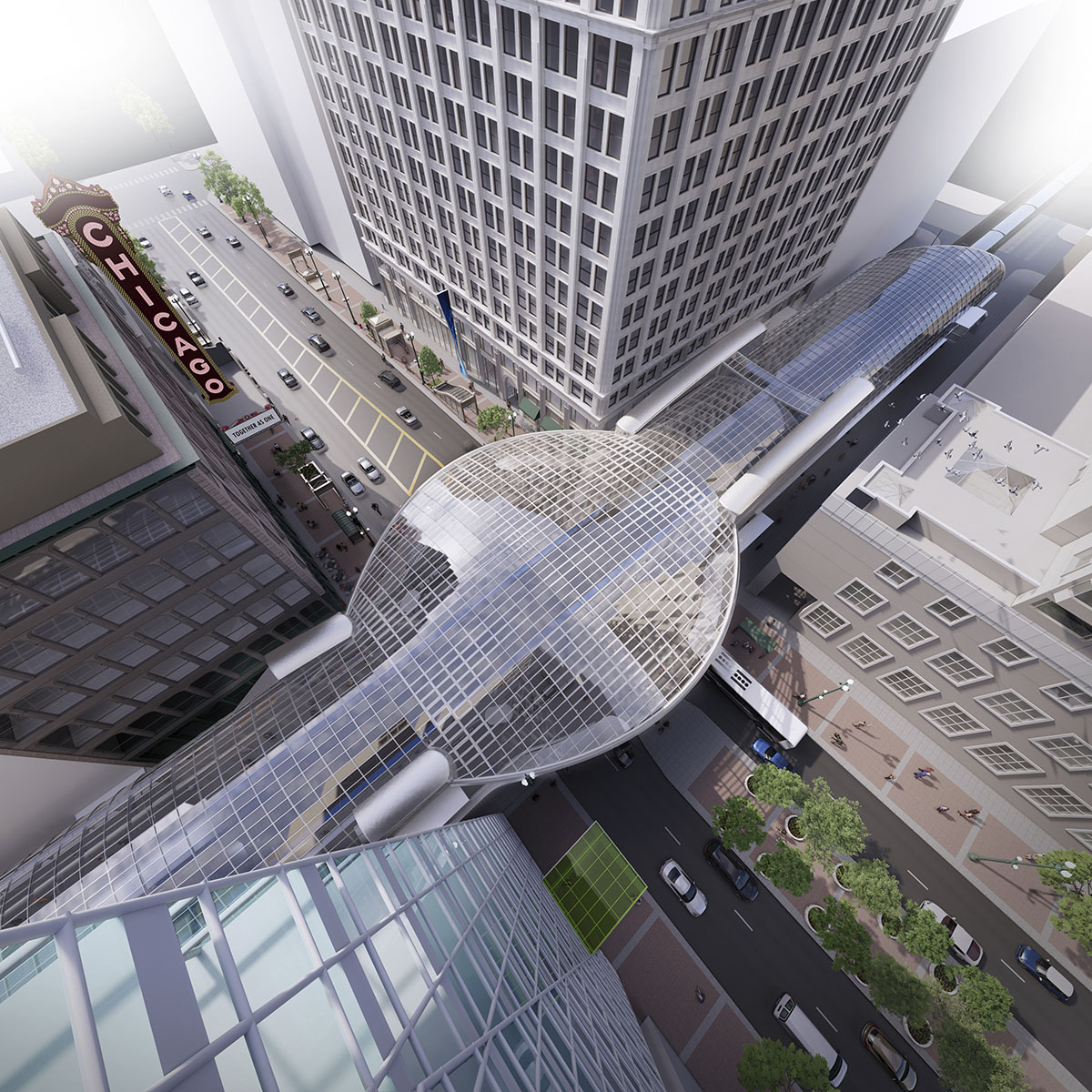 "CTA riders from every neighborhood in the City and passersby will be able to enjoy this new, beautiful station."

In order to provide an easy transfer for riders between platforms, the team added a new glass and metal-clad bridge on the western end of the station to connect to new elevators and stairs for fully accessible circulation from street to platform. 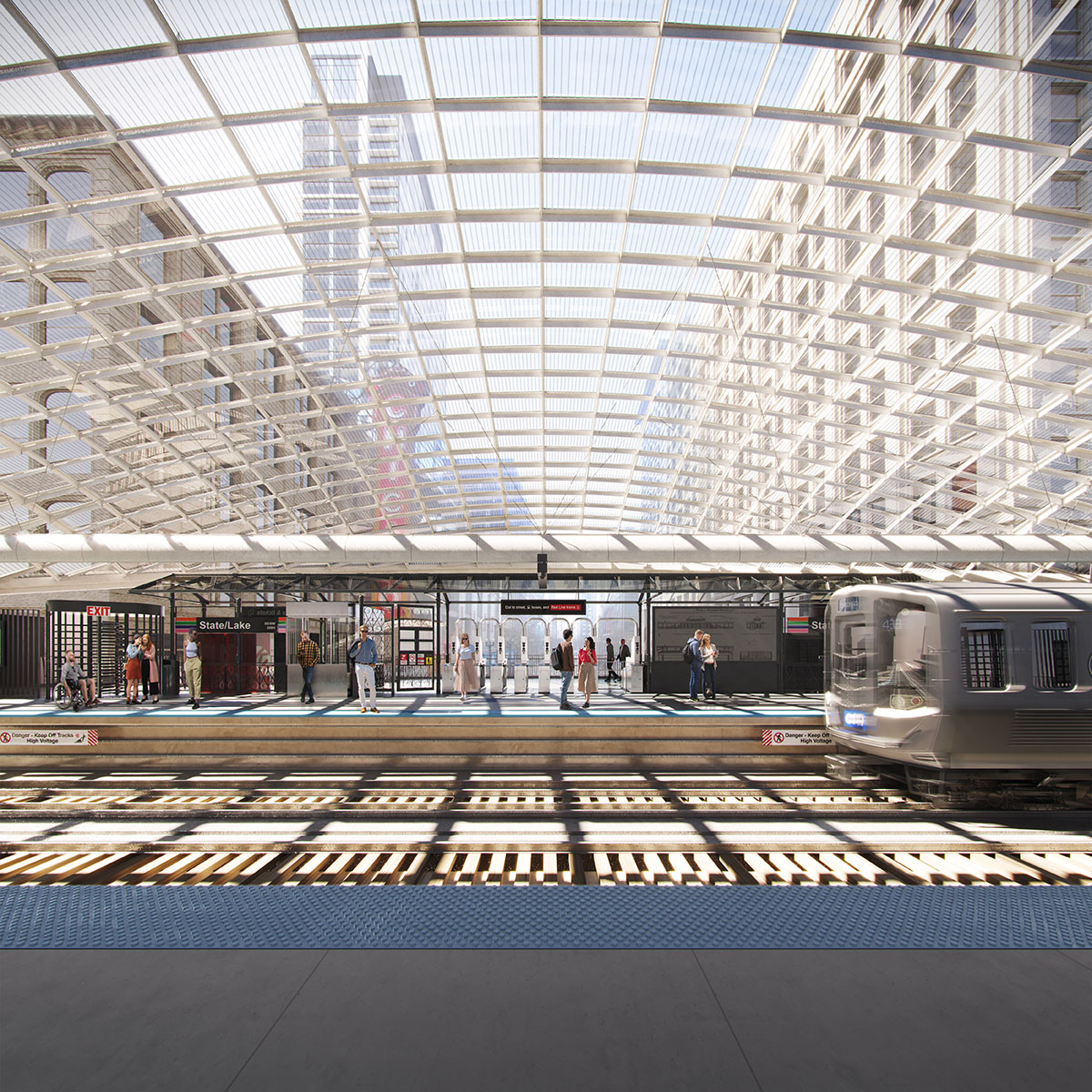 In this part, platforms are widened platforms and additional exits are added to accommodate increased ridership and improve comfort and safety.

SOM and TranSystems are working closely with CDOT, CTA and the City of Chicago, engaging stakeholders and consulting with the community throughout the design process. 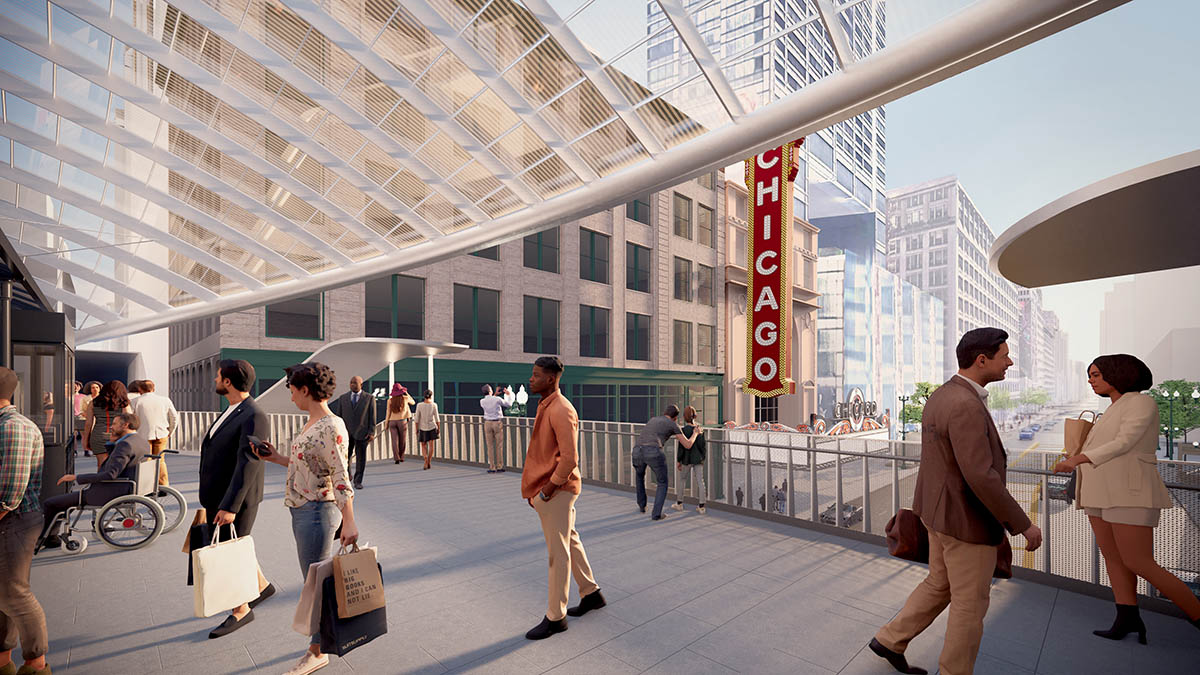 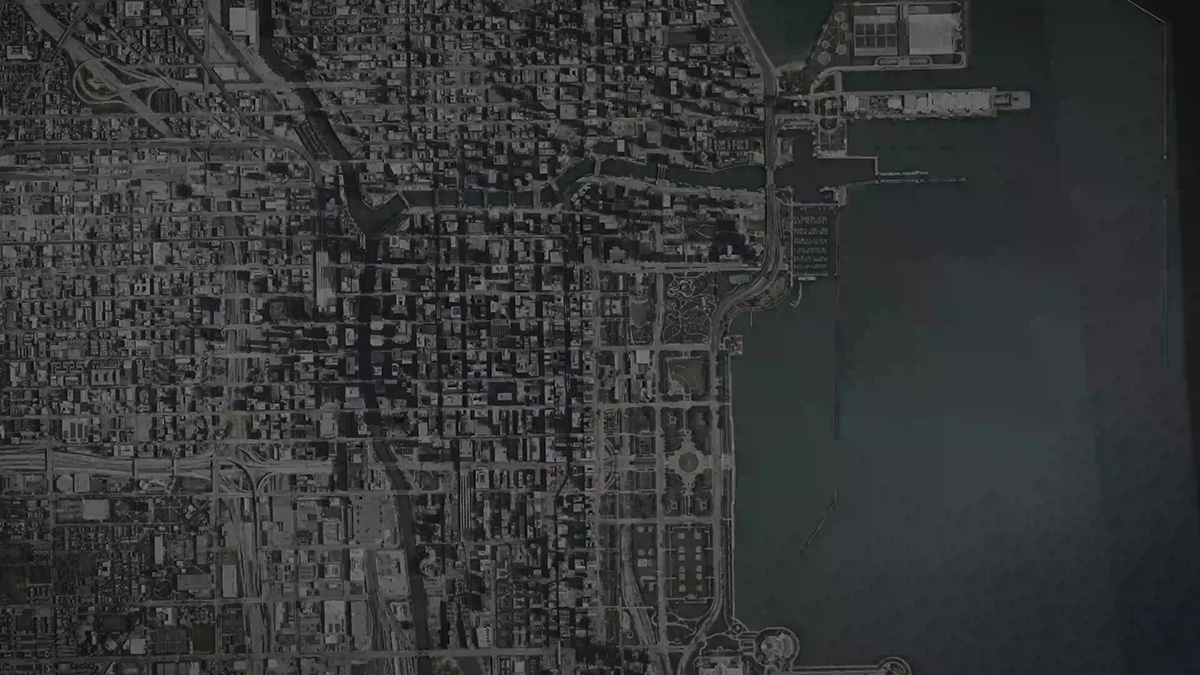