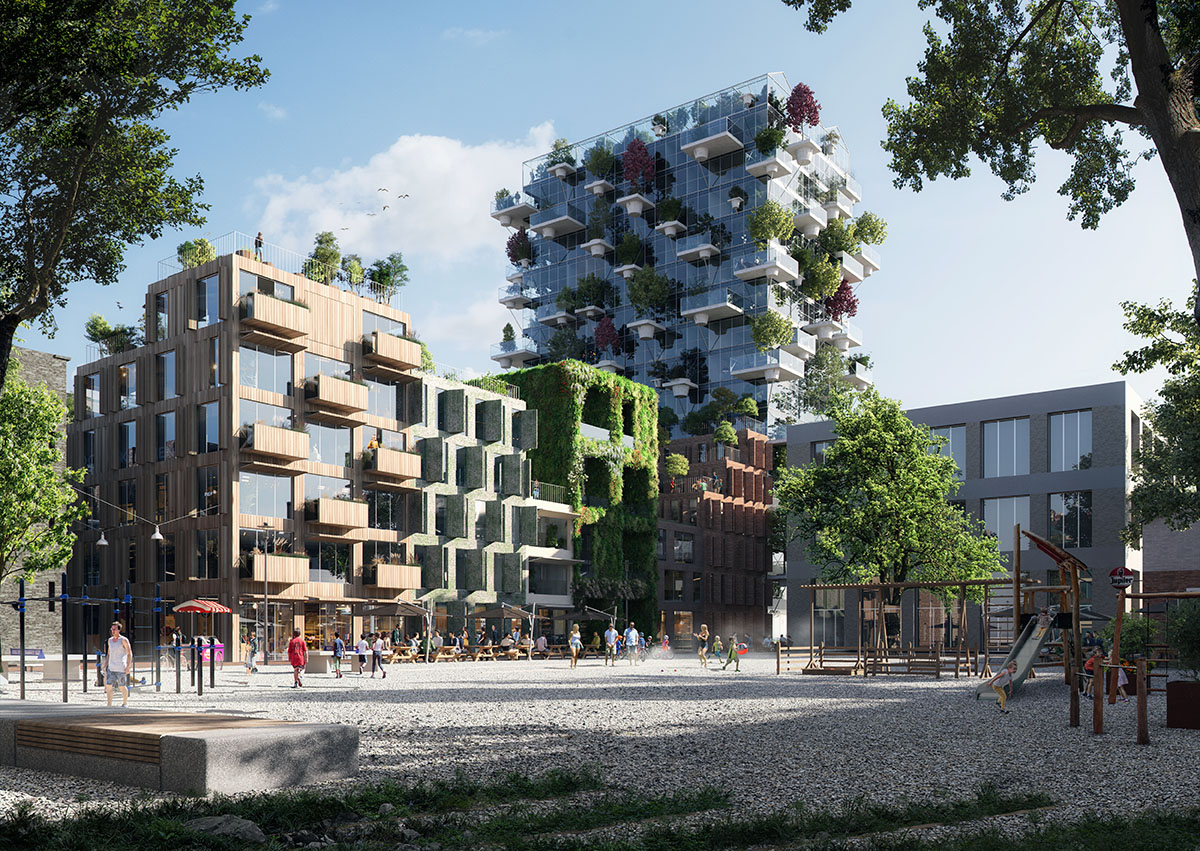 MVRDV has revealed design for an ensemble of residential buildings that create "a new green and people-focused street" as the entrance to Amsterdam neighbourhood in the Netherlands.

Called De Oosterlingen, the new complex comprises a block of seven sustainable residential buildings on Amsterdam’s Oostenburg Island. The project is prominently located at the entrance to the island, which is a formerly industrial area rapidly developing into a lively residential district.

Designed for real estate developer Being, the buildings in the ‘barcode’ composition form a clear family, but each building has its own character, with varying heights, roof shapes, and façades made of wood, glass, recycled brick, or biobased composite. 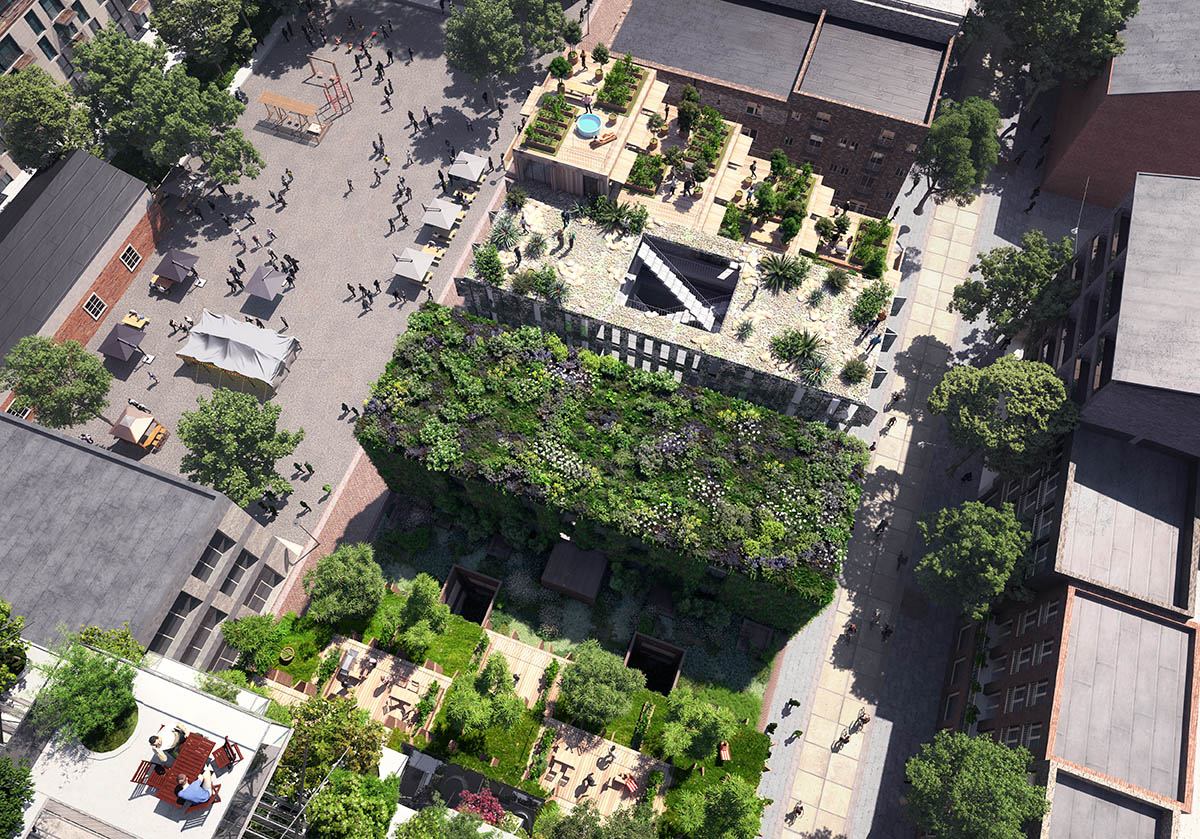 Covering a total of 13,950-square-metre area, the new complex will be home to owners and renters from various target groups.

"Amsterdam Oostenburg has a rich history. Since 2017, the neighbourhood has transformed into a lively city district in which the industrial history remains plainly visible, with monumental quay walls, warehouses, and cranes preserved as part of the neighbourhood," said MVRDV.

As MVRDV explains, De Oosterlingen will be located at the entrance to the island, next to the neighbourhood square. 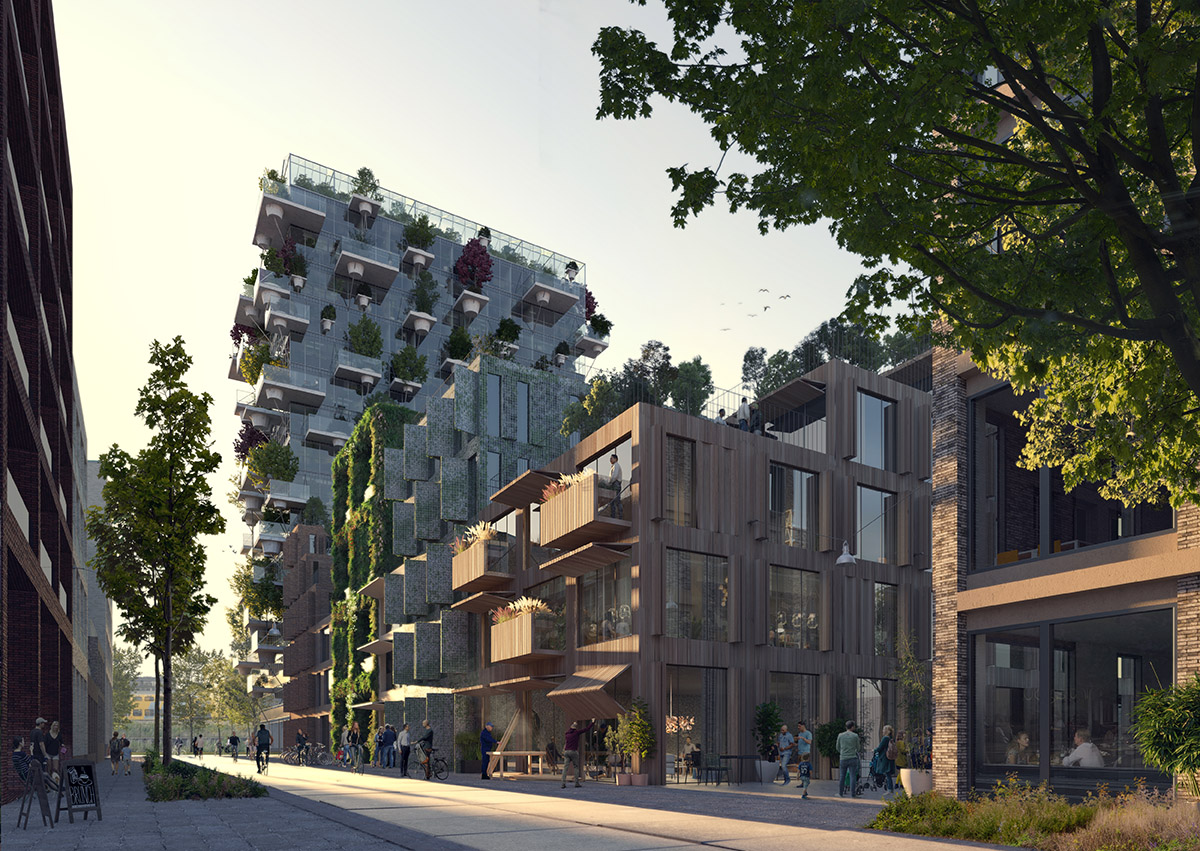 In response to Being and the Amsterdam housing corporation Stadgenoot's brief, the project will have "a green, people-focused street" that would form a striking entrance to the neighbourhood.

MVRDV designed seven adjoining, each with its own identity, its own living style organised around a collective space and rooftop, and its own contribution to greening the city.

"It will be a green complex that, in my view, is not only good for people but also for birds and insects," said MVRDV Founding Partner Winy Maas.

"One building will be made of rammed earth, an ancient and sustainable building method; another will have a completely green facade."

"Nesting boxes for house sparrows, swifts and bats will also be integrated into various façades. They create a cute street in the best Amsterdam tradition, but much greener," Maas added. 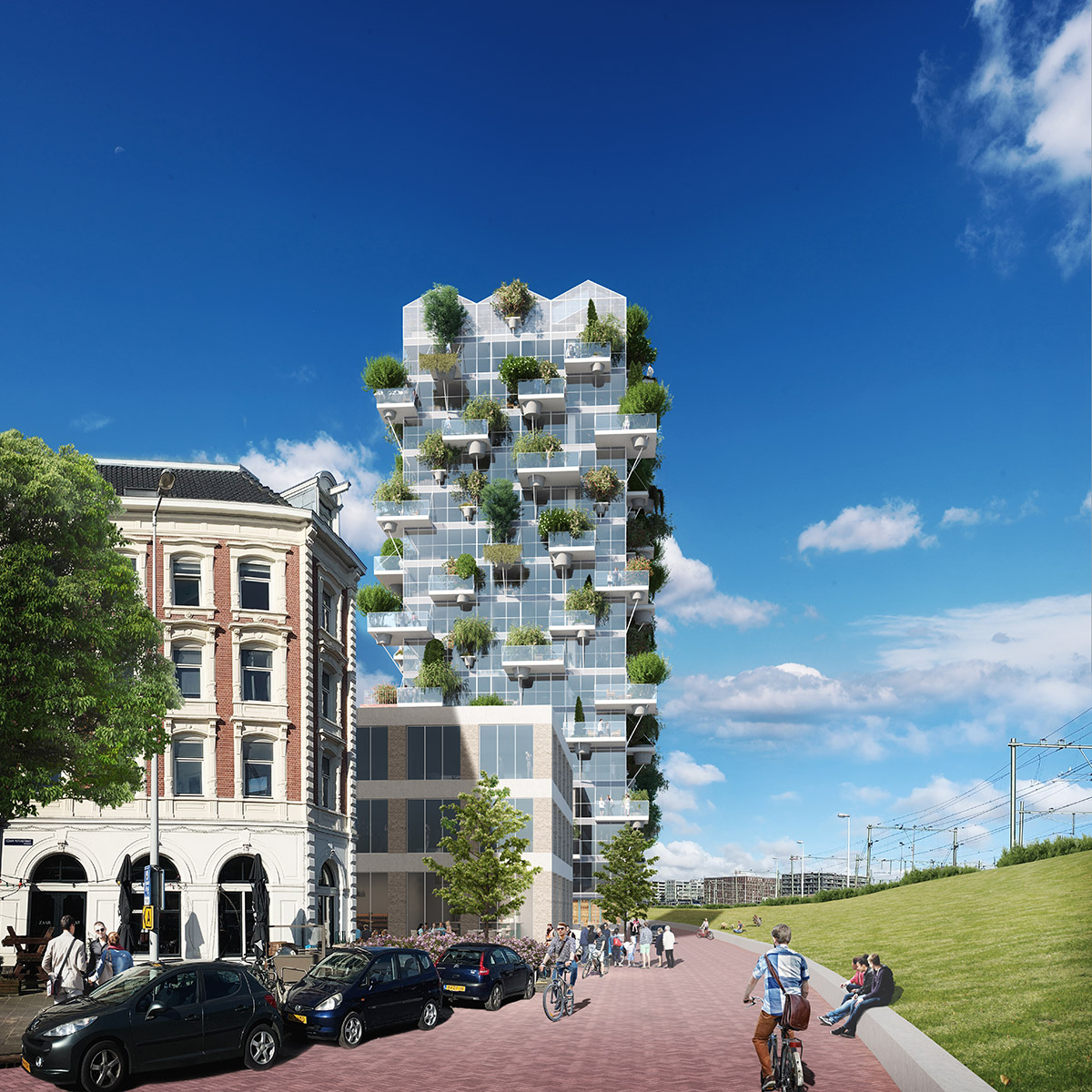 The seven buildings will comprise a green lab, or green expo. Designed as stepped buildings, with terraces, they are leading up from the lowest buildings to the tower at one end.

On the roofs of the lower buildings, there will be plenty of gardens, an apple orchard, urban farming, or a rooftop forest. While the roofs offer these “low-tech” solutions, they are aimed to help generate very low emissions. As the studio emphasizes, there will also be numerous practical interventions to achieve a holistic sustainable vision.

The façades of each building are inspired by the area’s historical warehouses, a number of these façades open up by means of folding shutters and canopies, as well as balconies and other features that appear as if they have also been created by “folding” the building’s skin. 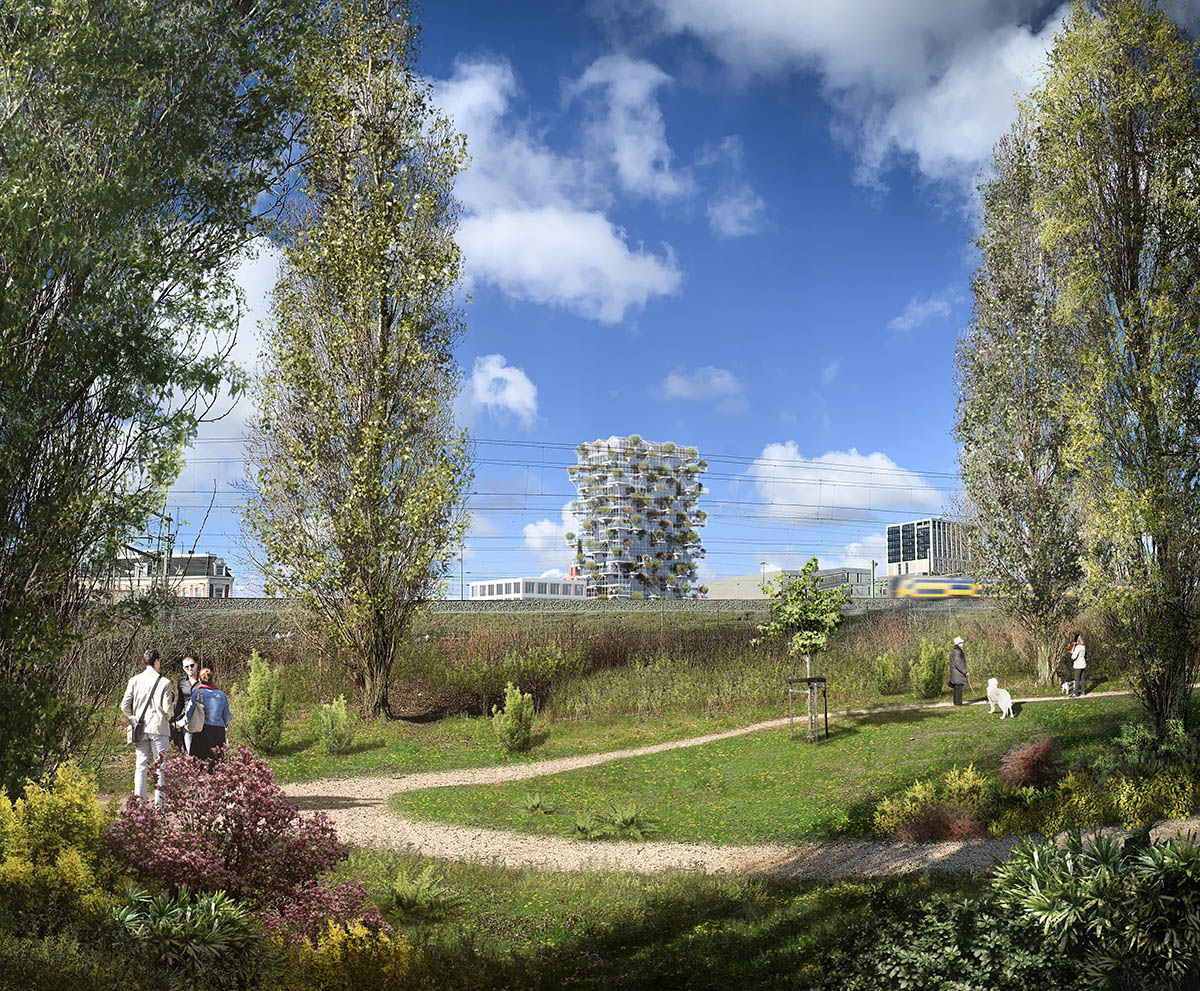 "The folding, sliding and hinging create a lively palette of facades, each notably different from the others yet still related," added MVRDV. "In addition to their solar and thermal quality, the shutters, canopies, and sliding doors also offer privacy to residents – they can open and close the façade as they please."

The buildings take human-centric approach to the core of design. In this sense, walking routes have been designed so that residents can easily meet each other, promoting a sense of community.

The complex has both lively and calm zones to provide suitable spaces for everyone. 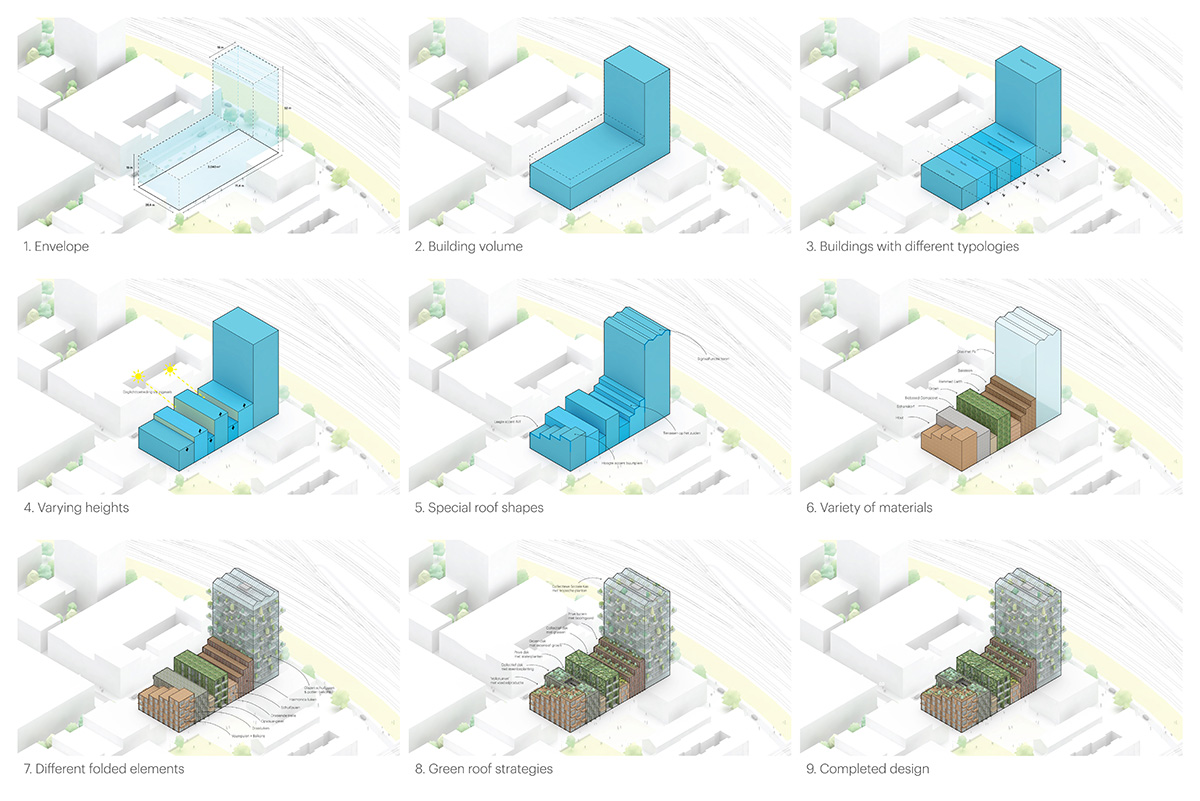 The development will comprise 144 homes for a variety of renters and owners, with 1,000 square meters of space reserved in the plinths of the buildings for various facilities, including catering establishments, a shop for healthy food, a small private cinema for 12 people, and a social impact factory intended for companies involved in social entrepreneurship.

Construction is planned to start in late 2022. 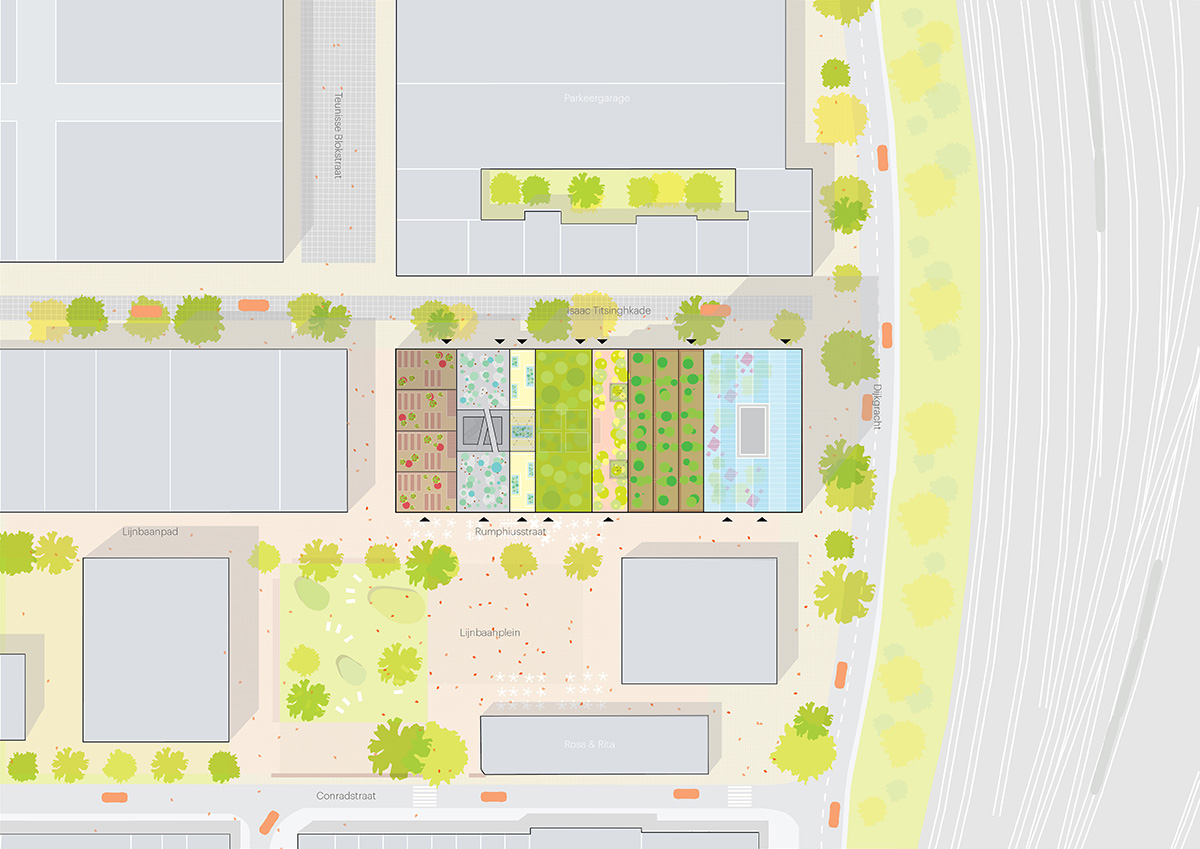 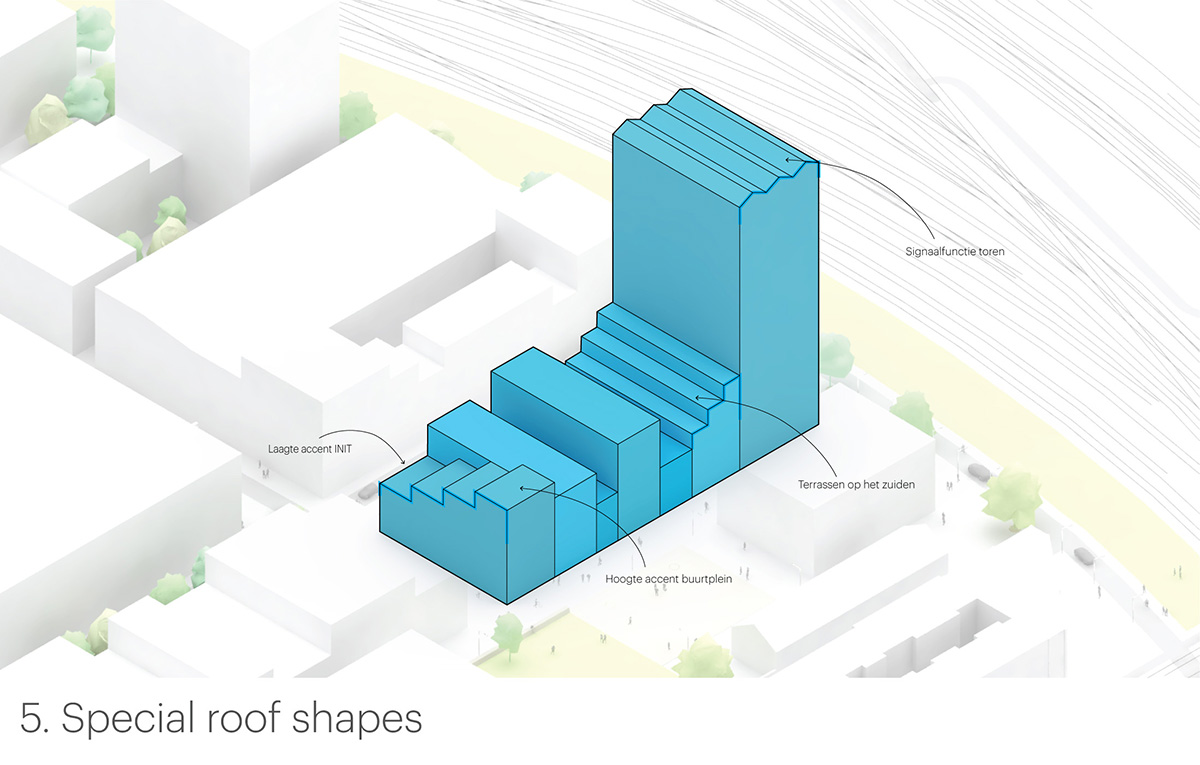 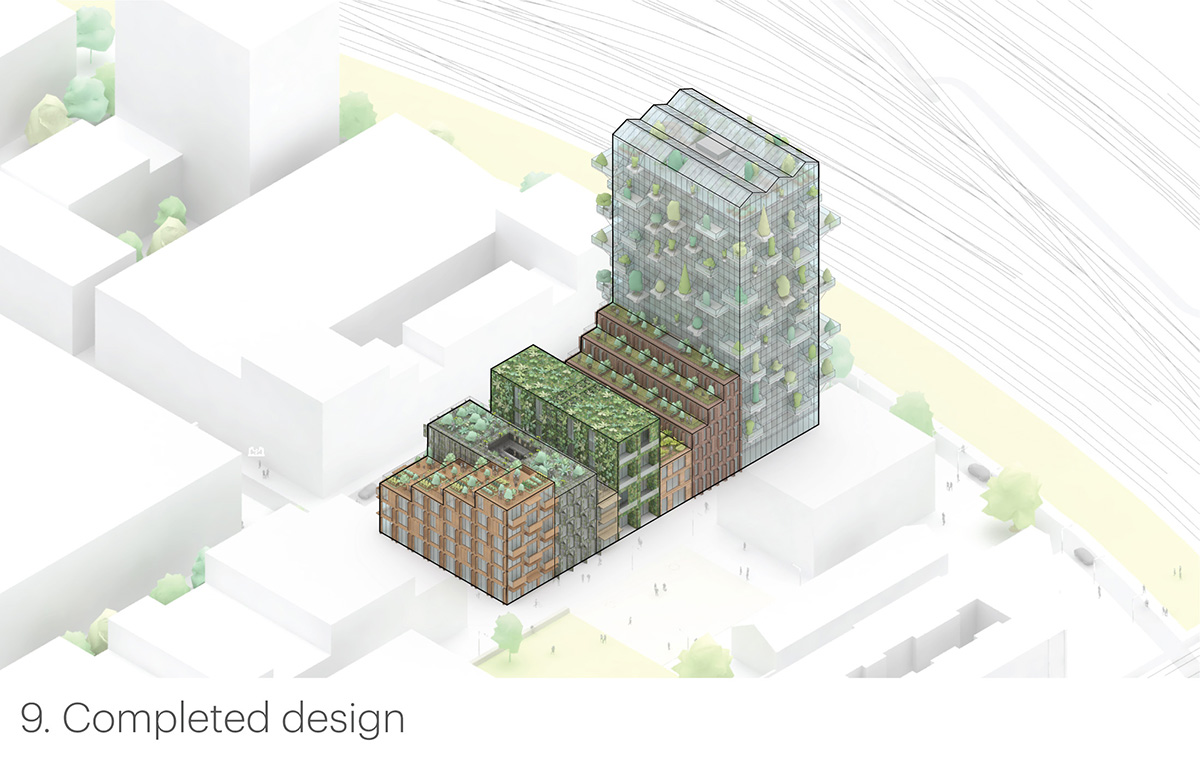 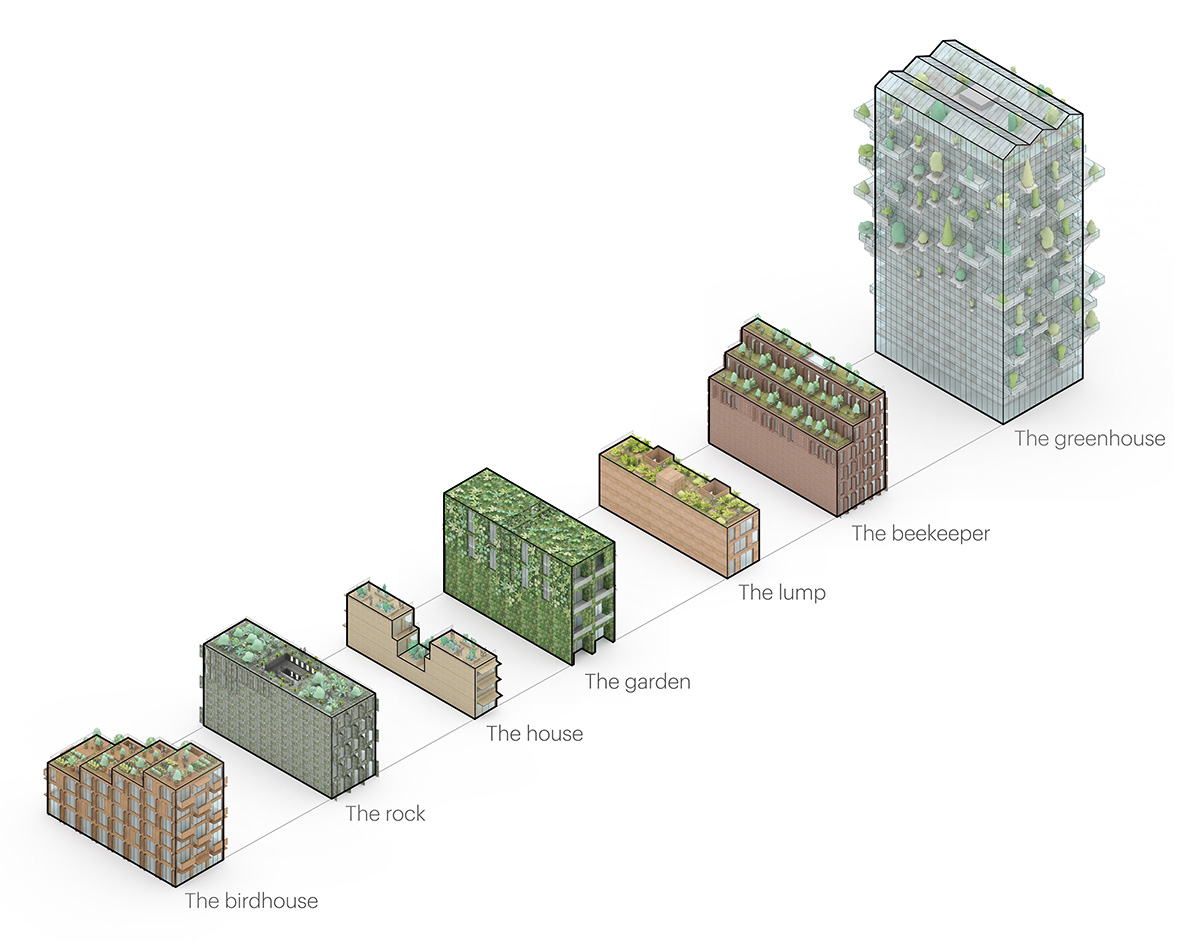 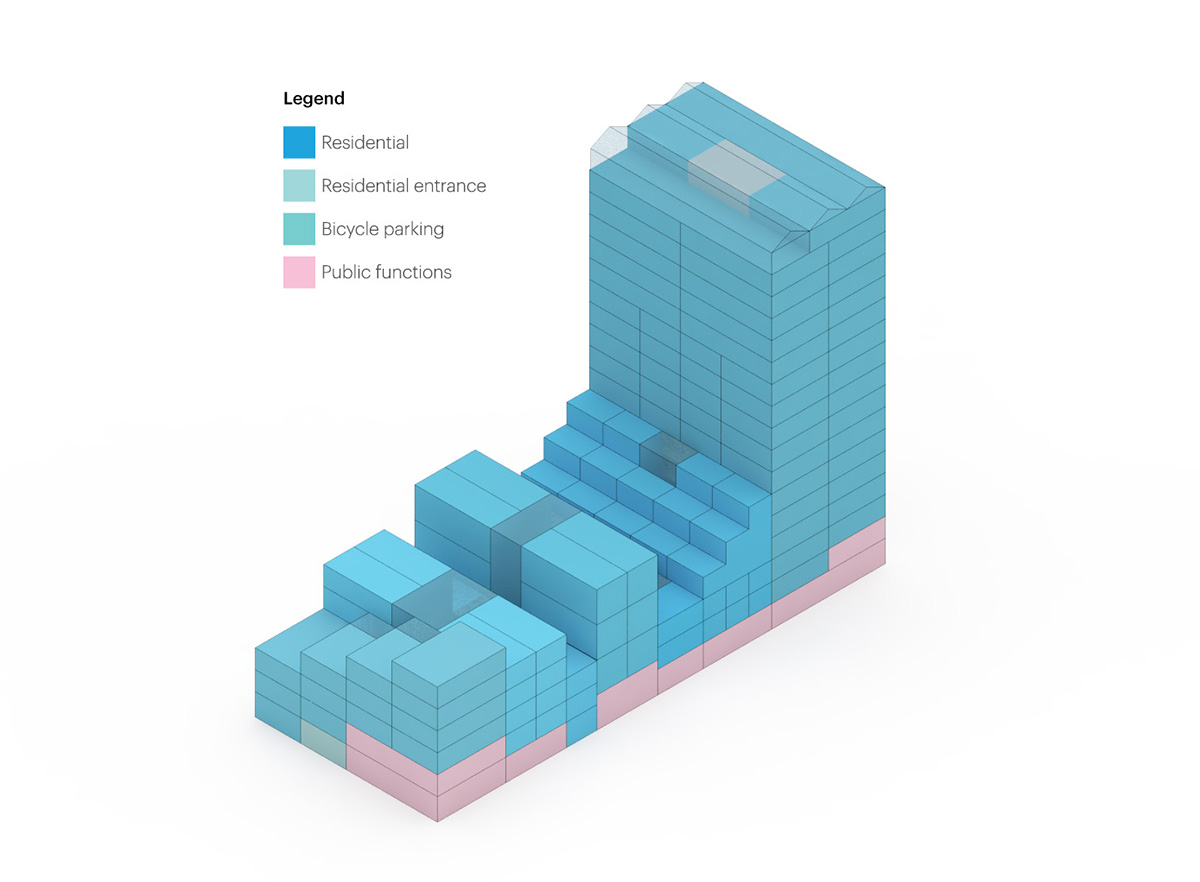 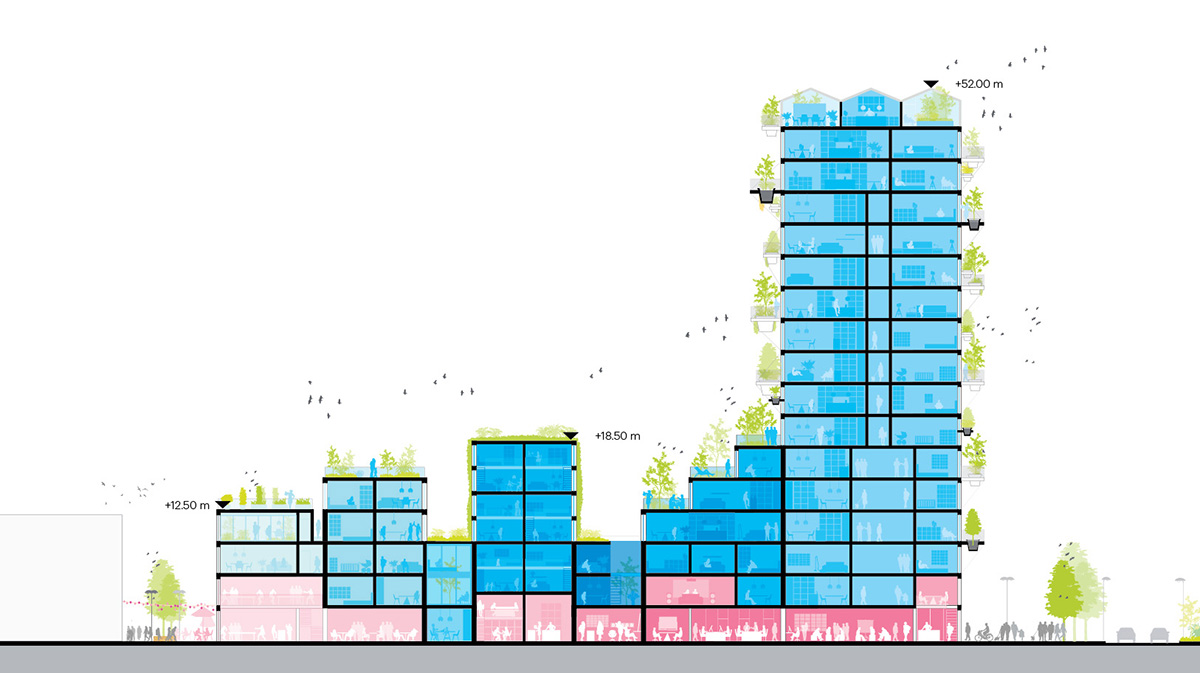 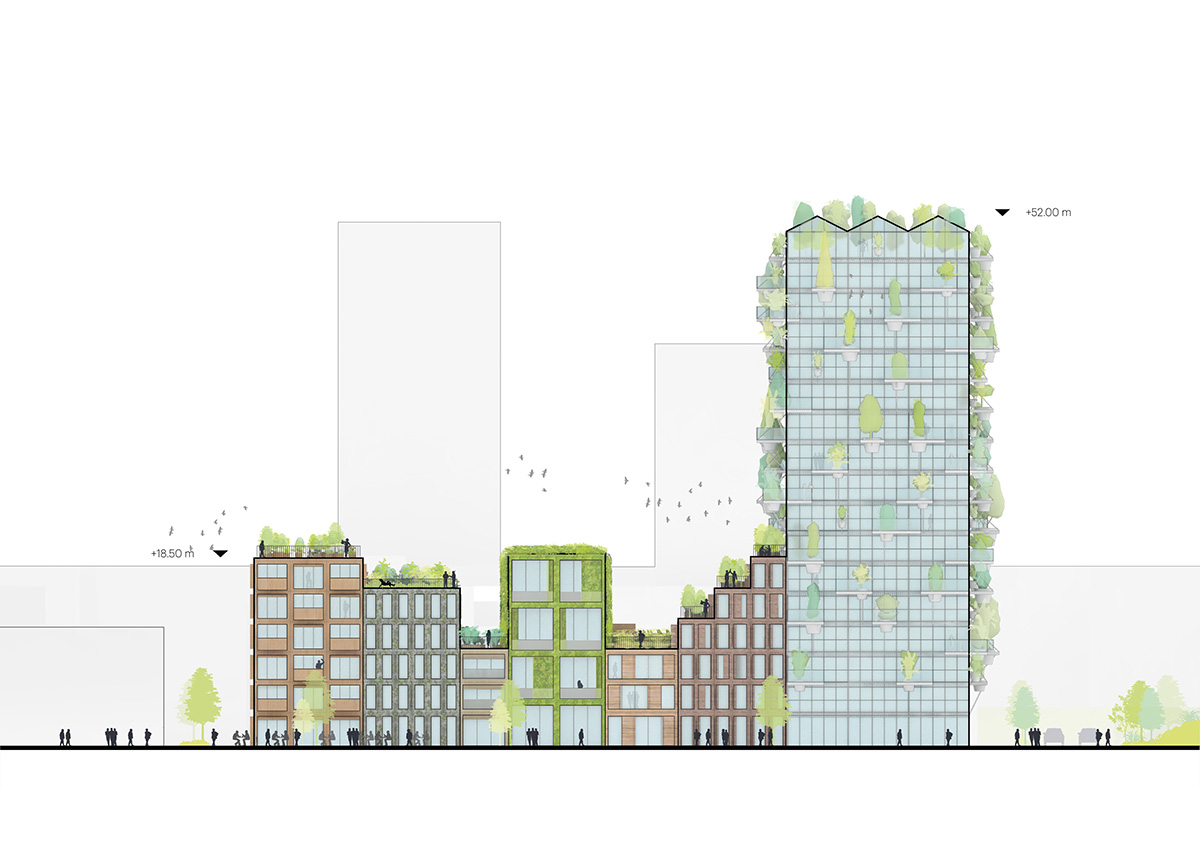 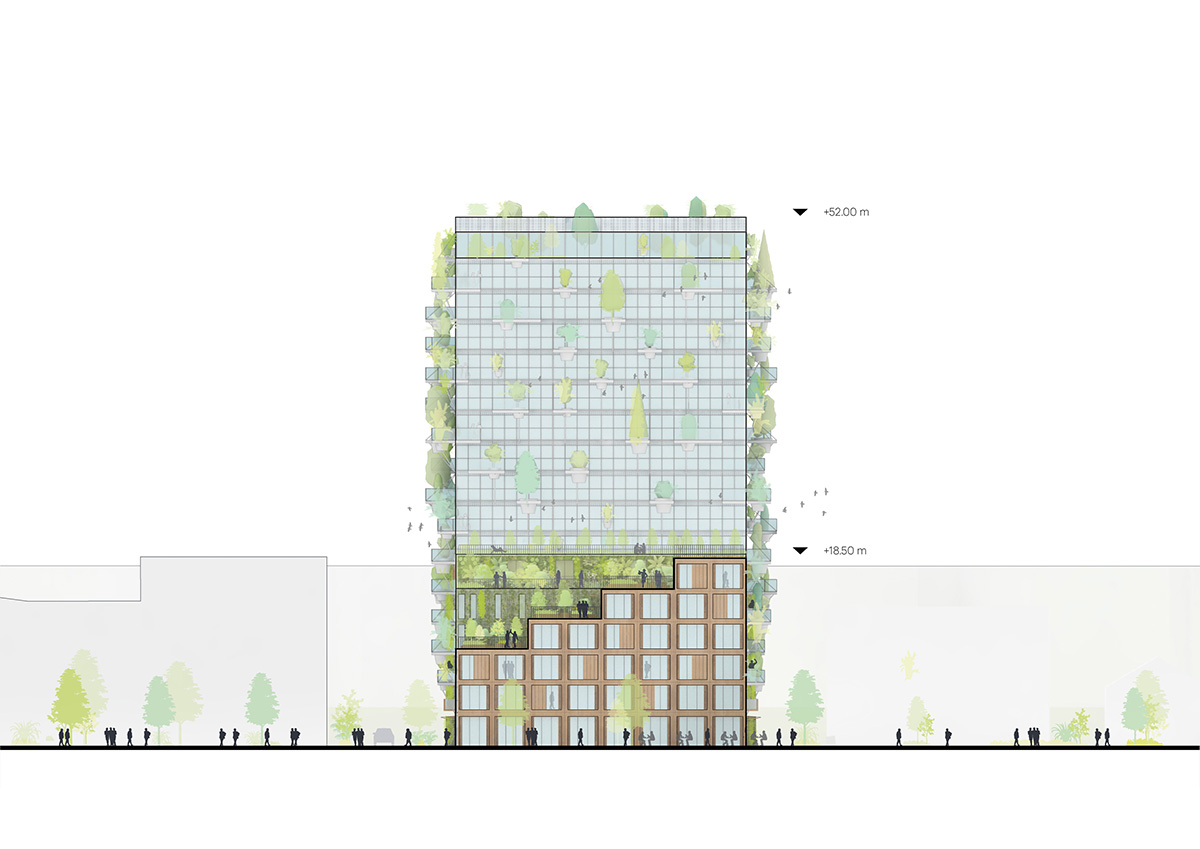