"My struggle was to create architecture optimizing the city’s climatic advantages with its socio-economic status," said acclaimed Bangladeshi architect Rafiq Azam, founder and principal of SHATOTTO architecture for green living, one of the reputed architectural firms in Bangladesh.

"At one stage of my life, I felt that I was becoming an architect of the wealthy whereas my desire was to become an architect of the common people," Rafiq Azam spoke to WAC's India Country Reporter Rupsha Chakraborty as part of WAC's video interview series.

Being one of the internationally acclaimed architects from Bangladesh, he is practicing in architecture for the last 27 years. Azam developed his own style with a poetic language as he took this approach from his passion to be a painter.

After he graduated from Bangladesh University of Engineering and Technology (BUET) in 1989, Azam founded his own practice “SHATOTTO architecture for green living” in May 1995.

His practice underlines the elements of the lost history and heritage of Bengal, while recreating a connection of its urban and rural culture. His architecture is described as a strong combination of tradition, nature, and mysticism with significant harmony. Removing boundaries with the use of plants and roof gardens, the use of traditional elements and materials are significant components of his designs.

SHATOTTO has recently completed the Mayor Mohammad Hanif Jame Mosque from brick in Dhaka, Bangladesh, which reflects the architect's architectural language with simplicity of materials and contemporary additions.

Azam's architectural language is built upon on "human interaction" in which he takes his references from Lalon’s philosophy of “dialoging body and mind”. According to him, "architecture has a physical body – its envelope – and nature – its soul."

In this 30-minute interview, Rafiq Azam discusses the roots of his practice, mission, recent projects of his studio, Bangladeshi architecture and sustainable architecture.

Rafiq Azam graduated from Bangladesh University of Engineering and Technology (BUET) in 1989. He founded his own practice "SHATOTTO architecture for green living" in May 1995.

In 2004, Rafiq Azam participated in “Glenn Murcutt Master Class” and selected as one of the ten emerging designers of the world by “Urban Land”, USA in 2008. 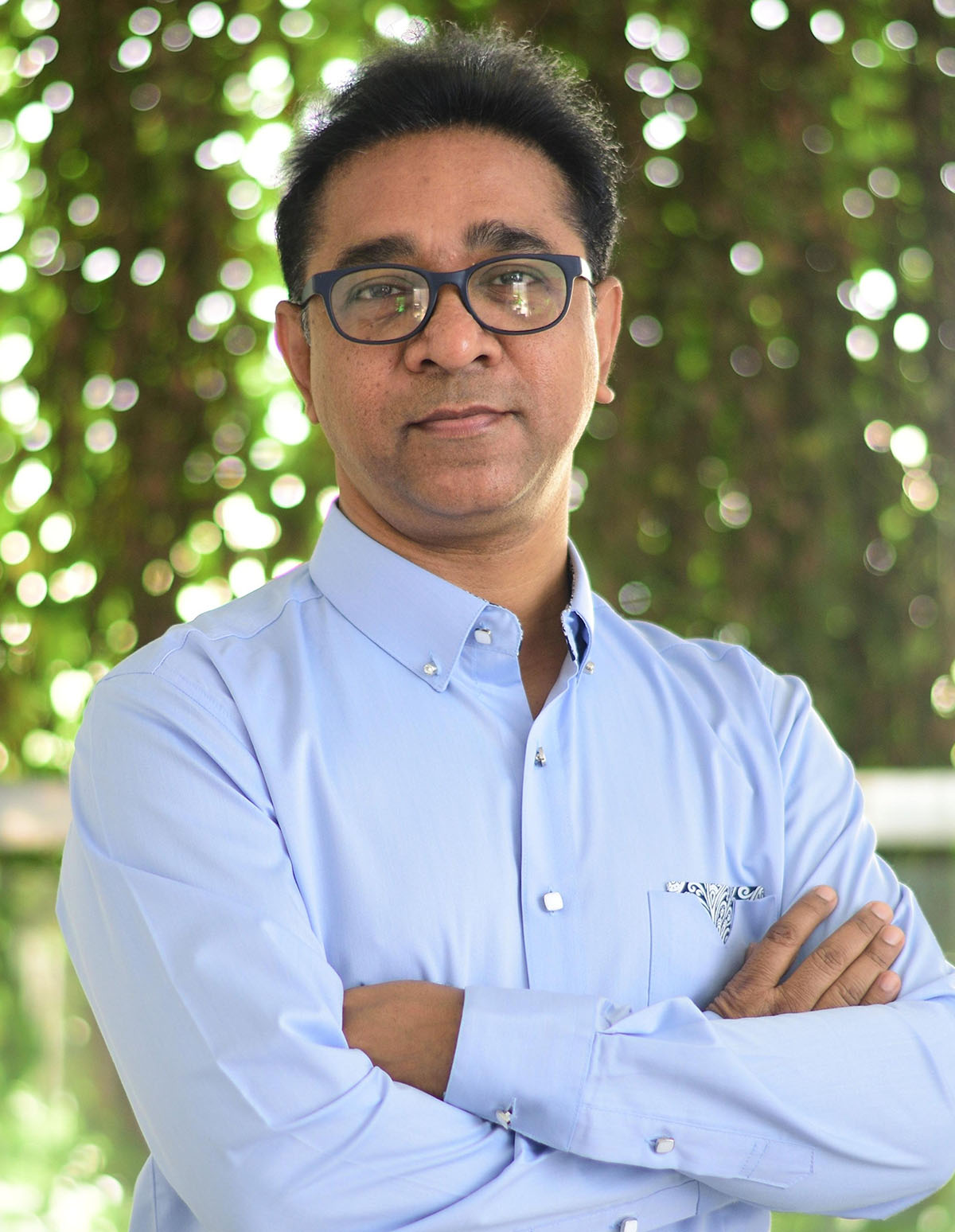 He was also finalist for the Aga Khan Award for Architecture in 2004 and 2007.

Recently he has won the first prize in Eurasian Prize 2020 in “Architecture” category for the project “Mayor Mohammamed Hanif Jame Mosque”. Another project: “Shahid Haji Abdul Alim Playground” has been awarded as one of the most potential projects in “Urban Planning” category in the same competition. He served as an international juror and attracted to media all around the world. 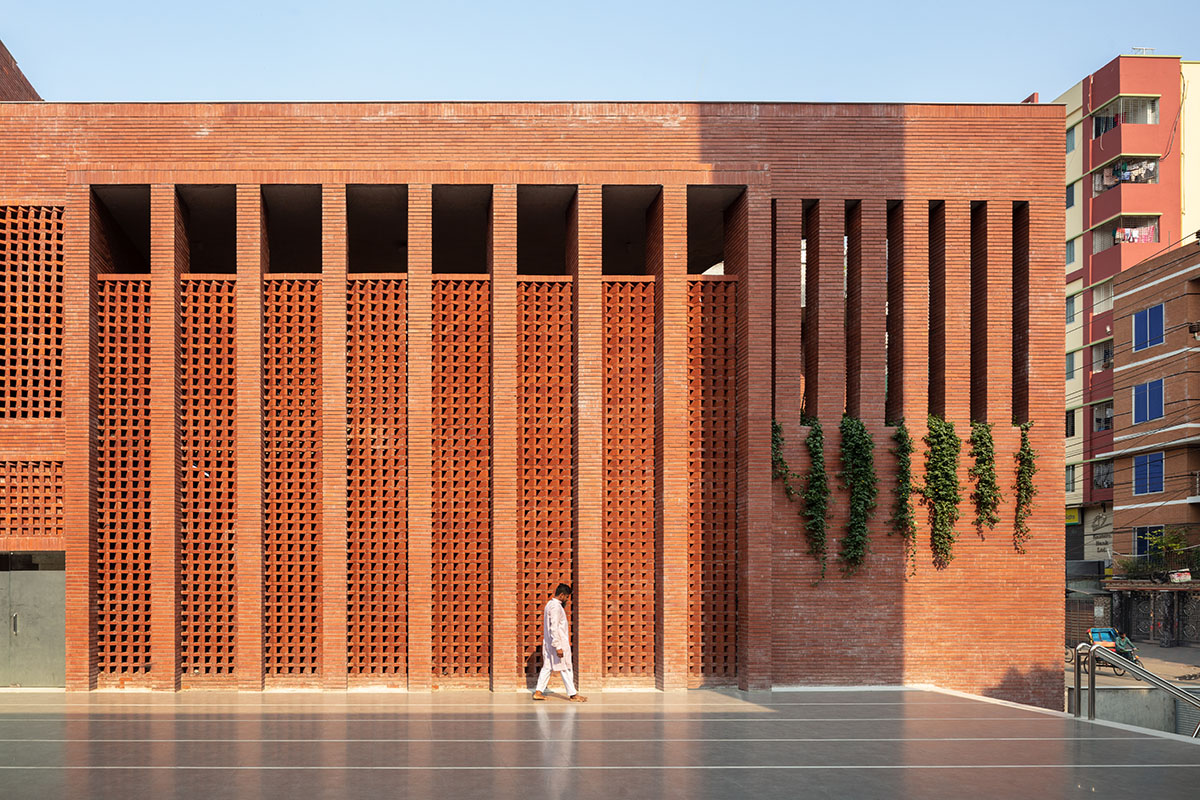 SHATOTTO are currently revitalizing 32 parks and playgrounds in the old and neglected parts of Dhaka devasted by all sorts illegal and anti-social activities. 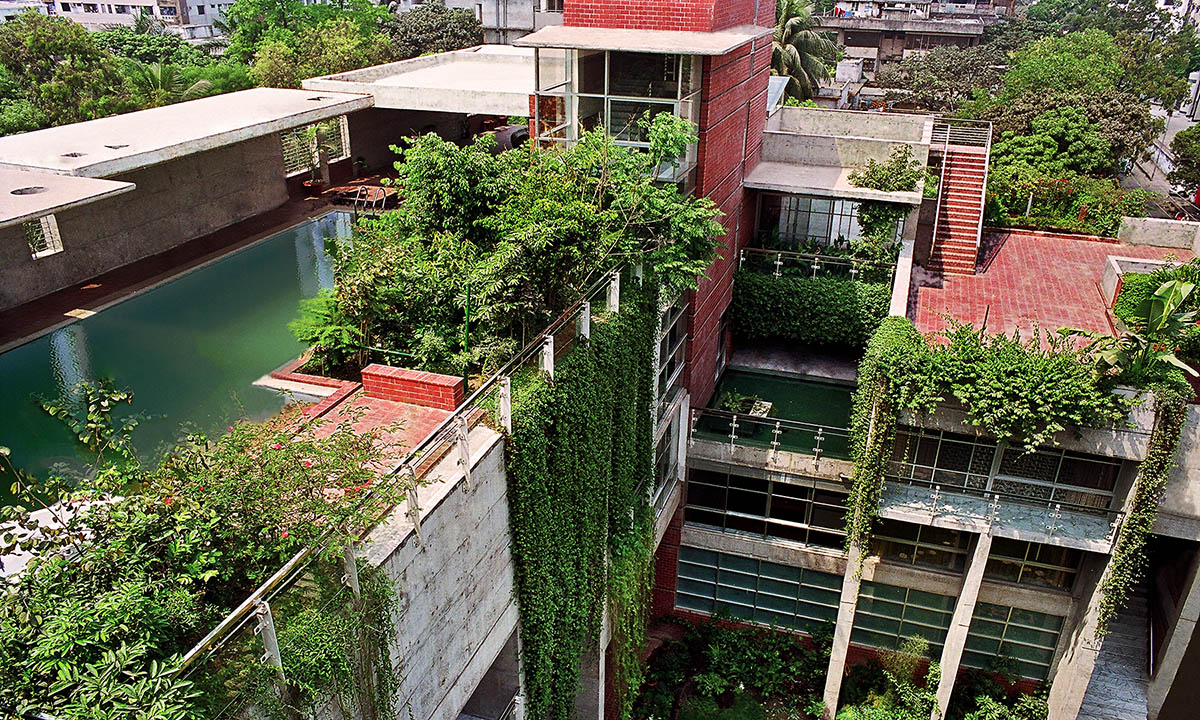 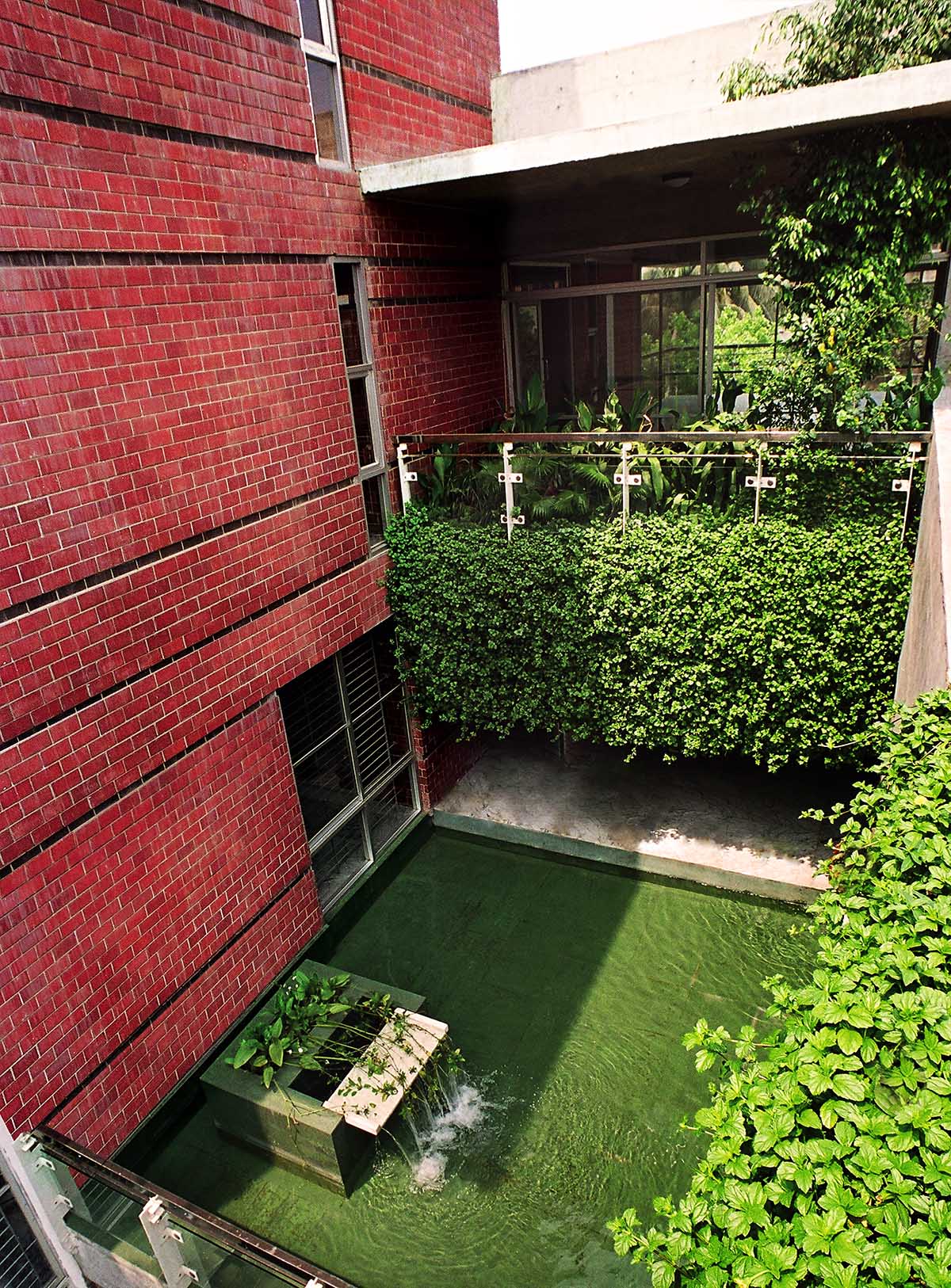 Completed in 2006, SHATOTTO's Meghna Residence presents a tropical and deltaic experience. The building stands on a corner plot, with connecting roads at the northeast and the northwest.

The house faces a large open playfield and a swimming pool belonging to the women sport’s federation across the northeast road. On the southeast stands a six-story apartment whose facade boasts 49 windows overlooking the plot, while on the southwest lies a two-story residence, on the site with the potential of high-rise construction sometime in the future. 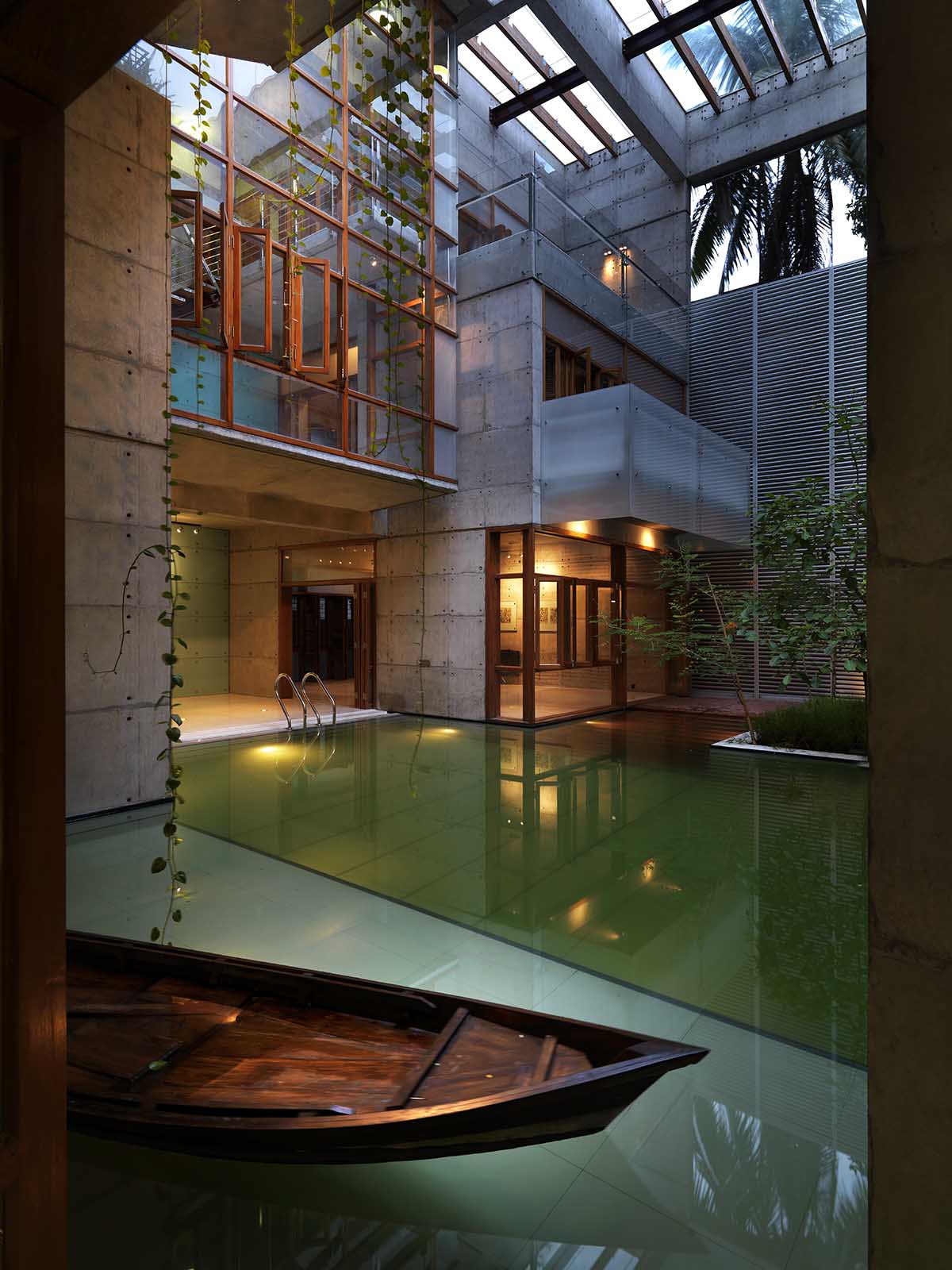 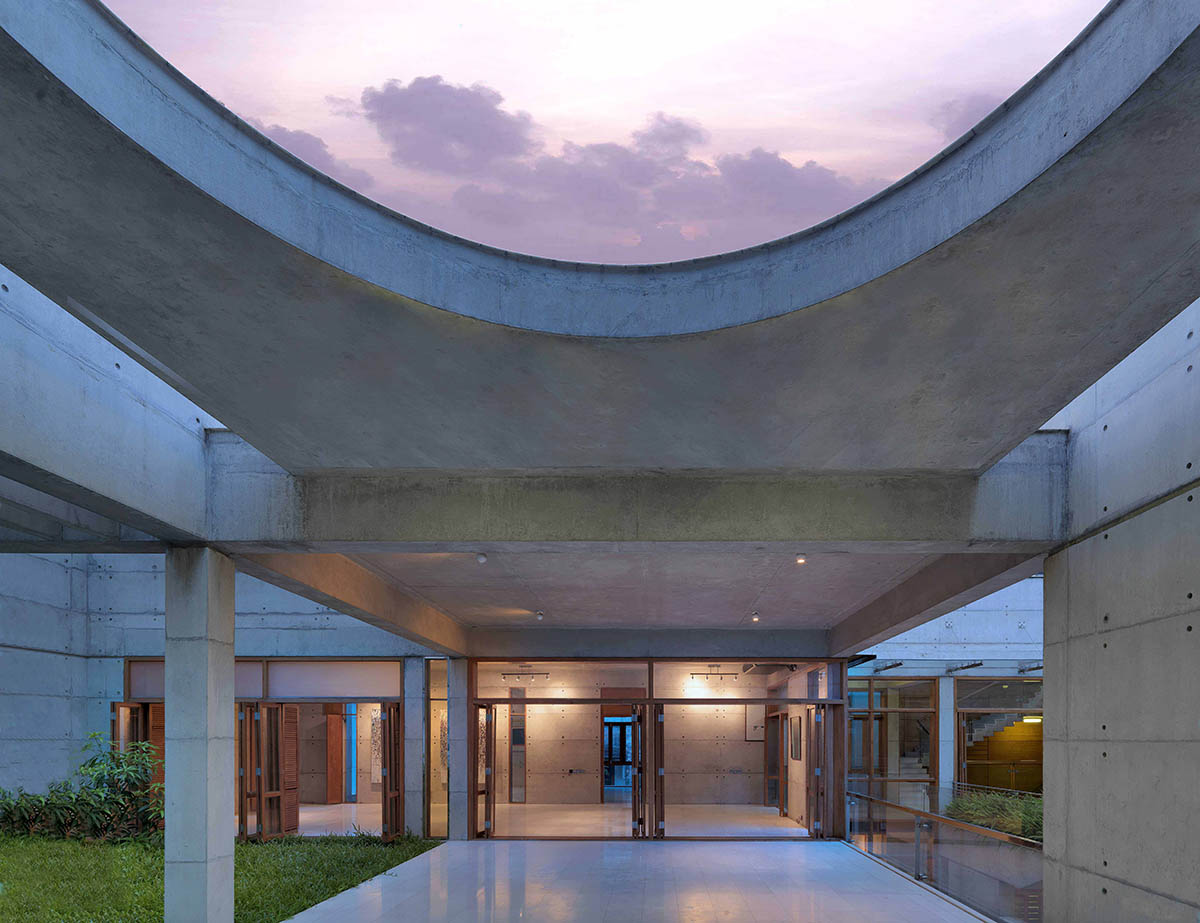 Completed in 2010, S.A. Residence in Bangladesh is described as "unfolding nothingness". The architect took inspiration from "water", the most precious and abundant element in Bangladesh, weaving its way subtly through all living things, making the country one of both toil and poetry.

Designed as a three-storey building, single-family residence, the shell is a pure square made entirely of a single material, concrete, which is transformed into a celestial form, the sphere, and is grounded in its thinking soul; Mother Nature is conversing with the shell.

"In the SA Residence, traditional spatial qualities from both urban and rural typologies combine and merge. The courtyard and adjacent pond hint at the traditional urban typology, creating a water square symbolizing nothingness yet capturing, reflecting, and refracting the sky above, the birds in flight, the sun’s arc, the shimmering moon, and hence the entire cosmos," the architect said in a project description. 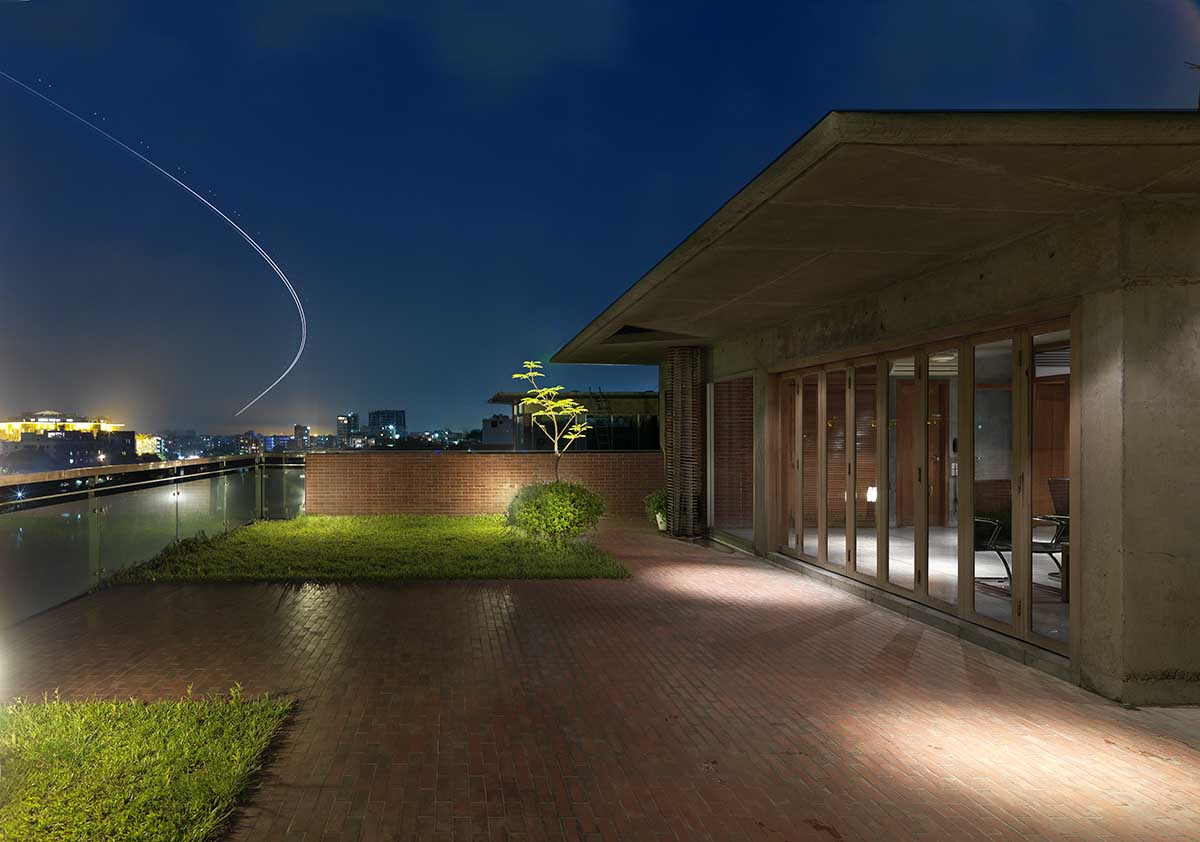 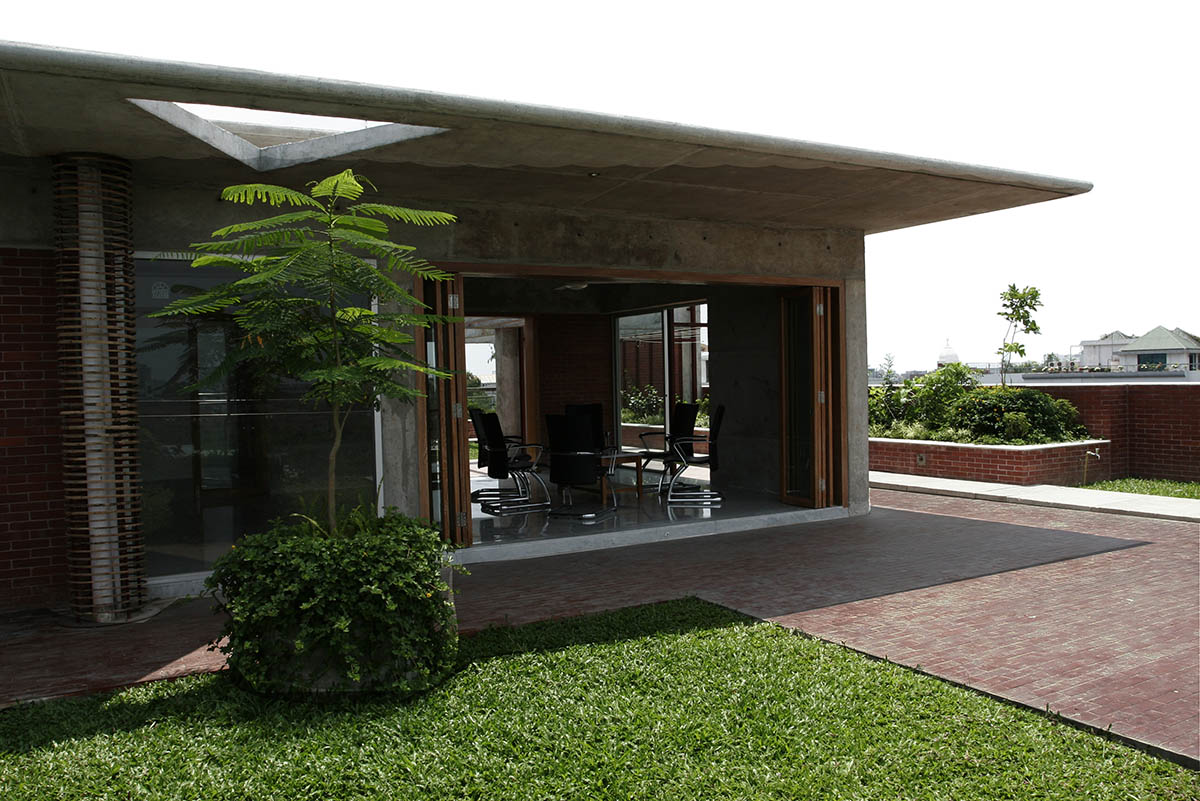 South Water Garden was completed in 2007 in Bangladesh. Located in the Baridhara Diplomatic zone on United Nations Road, the South Water Garden apartment building is not much of an exception in terms of greenery. Fortunately, this particular site boasts a lake and narrow strip of vegetation at the rear (west) of the plot.

The interiors of the two buildings a similar scheme, with five apartments and the ground floor for parking. In the design plan, the simple interiors meet the functional requirements while visually connecting with the beautiful lake and the large trees on the western side, allowing the southeast summer breeze to pass through the entire building and ample light throughout the day. 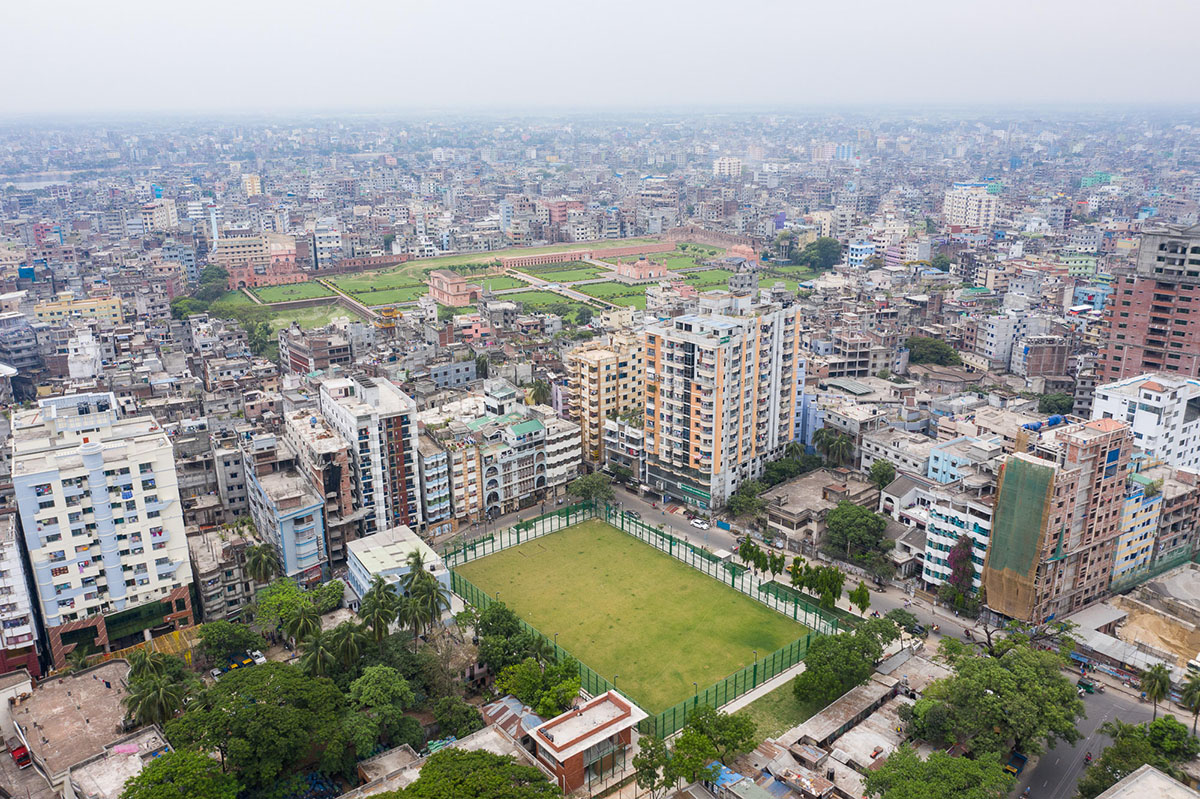 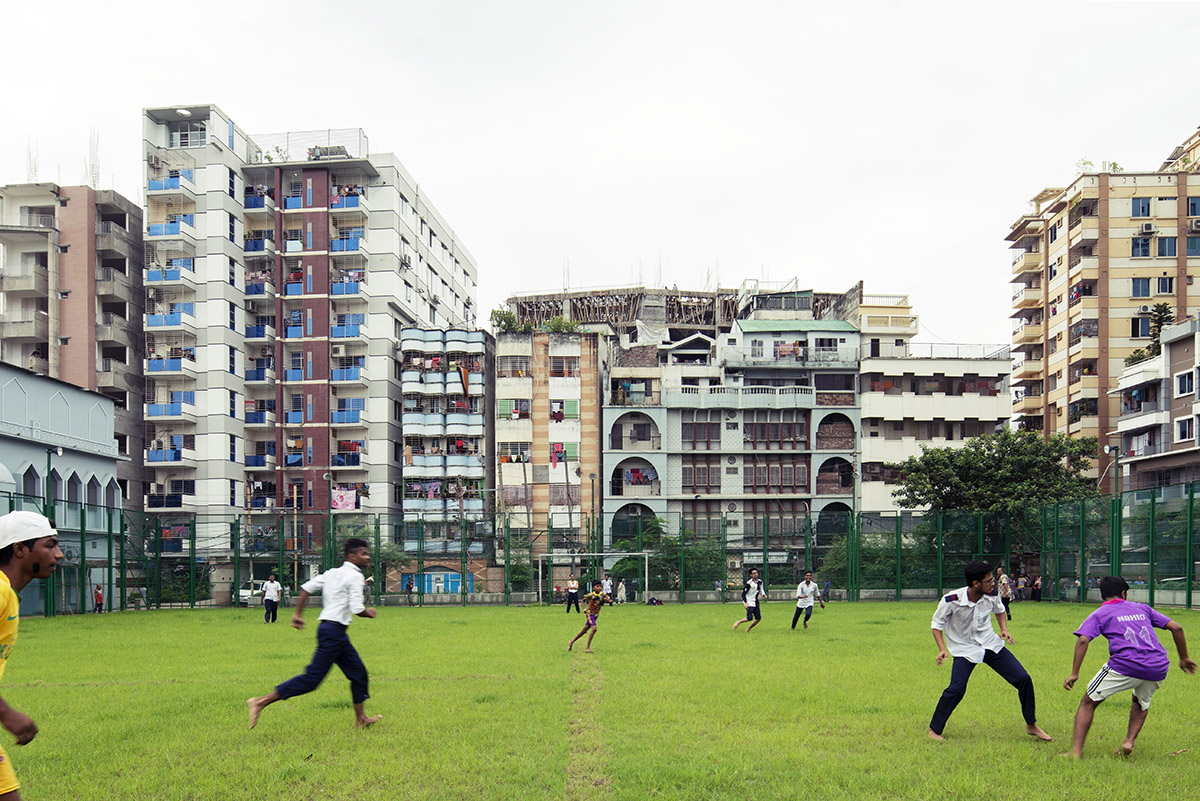 Shahid Haji Abdul Alim playground is a revitalization project in a dense old part of Dhaka. For many years this park was abandoned by the community due to it being illegally occupied and used for indecent activities.

The ground’s walls were hosted vagrant camps and its greenery had all but disappeared. In response, the design philosophy was to remove the peripheral walls and return ownership to the community with trust and respect. The use of harvested rainwater and creation of spaces for everyone in the community made the project not only sustainable, but also a celebration. 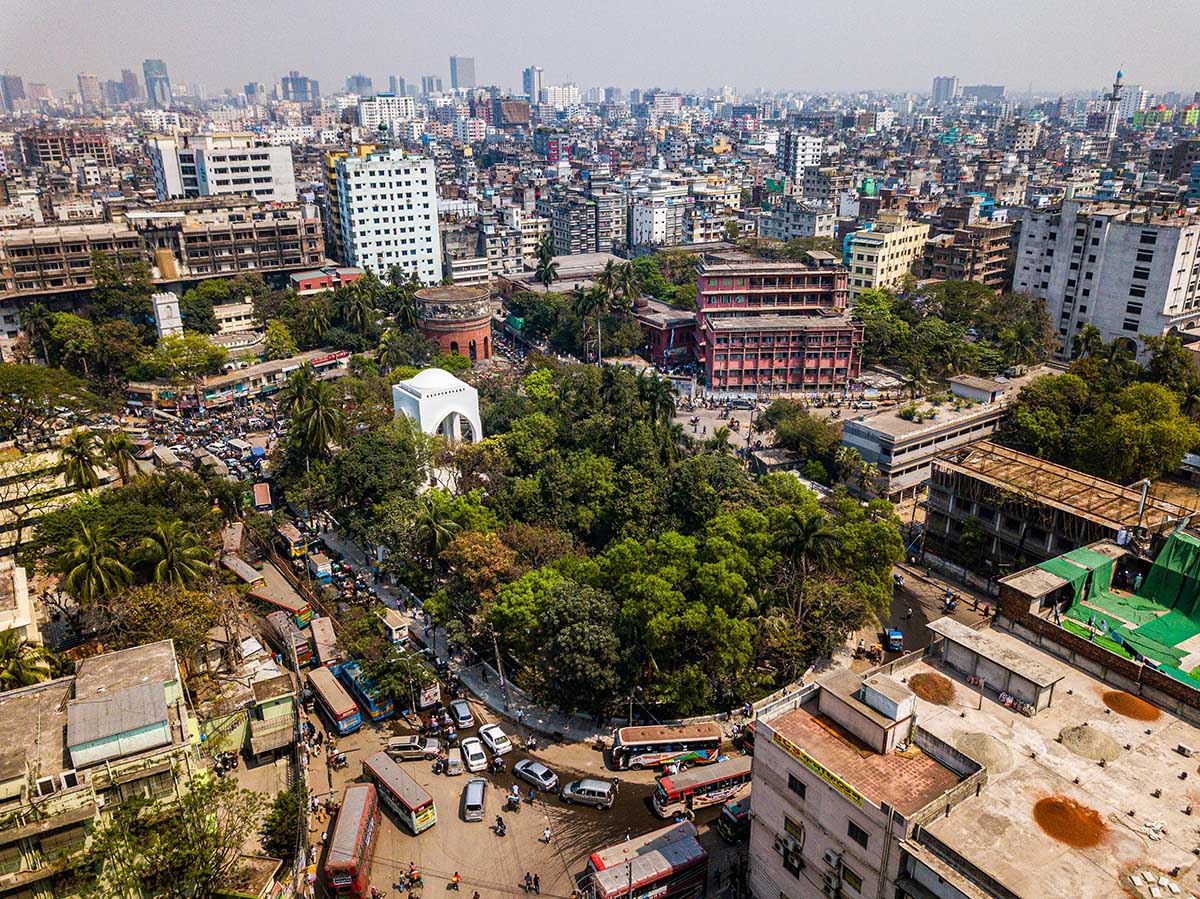 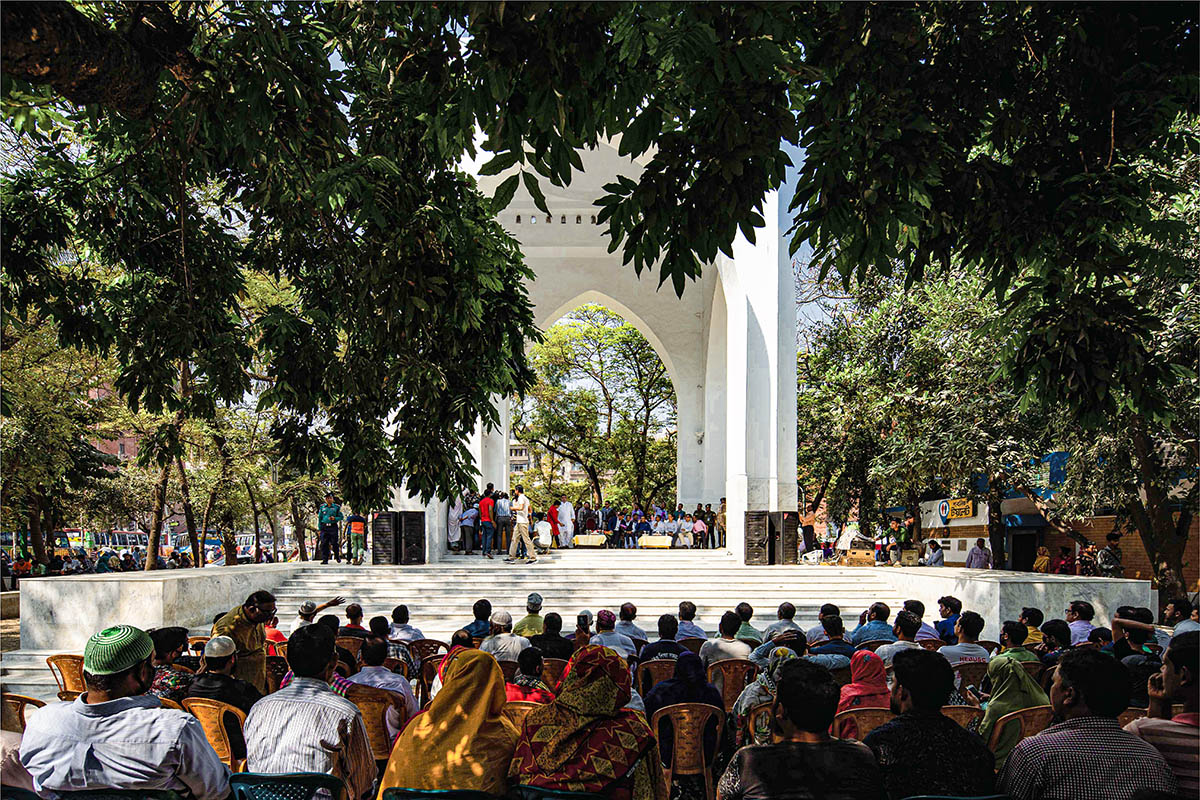 The design decision of the revitalized project challenged the hegemonic idea of putting boundary walls and removed all the existing boundary walls to open up the park which ultimately turned the park into a 24/7 accessible place. Another important design decision was to widen the footpath by removing the illegal bus parking on the northern side of the park as well as separating the road for the large vehicles and the small vehicles for the ease of traffic management.

SHATOTTO has developed into a Consultancy Organization providing Consultancy for detailed planning, design and engineering for varied and diverse discipline of projects. Its professional achievements include a large number of Consultancy assignments.

The firm has experienced staff and qualified professionals, comprising Architects, Landscape Architects, Interior Designers and Engineers of various disciplines. SHATOTTO also has an active panel of associate consultants and advisors with rich experience in various fields.