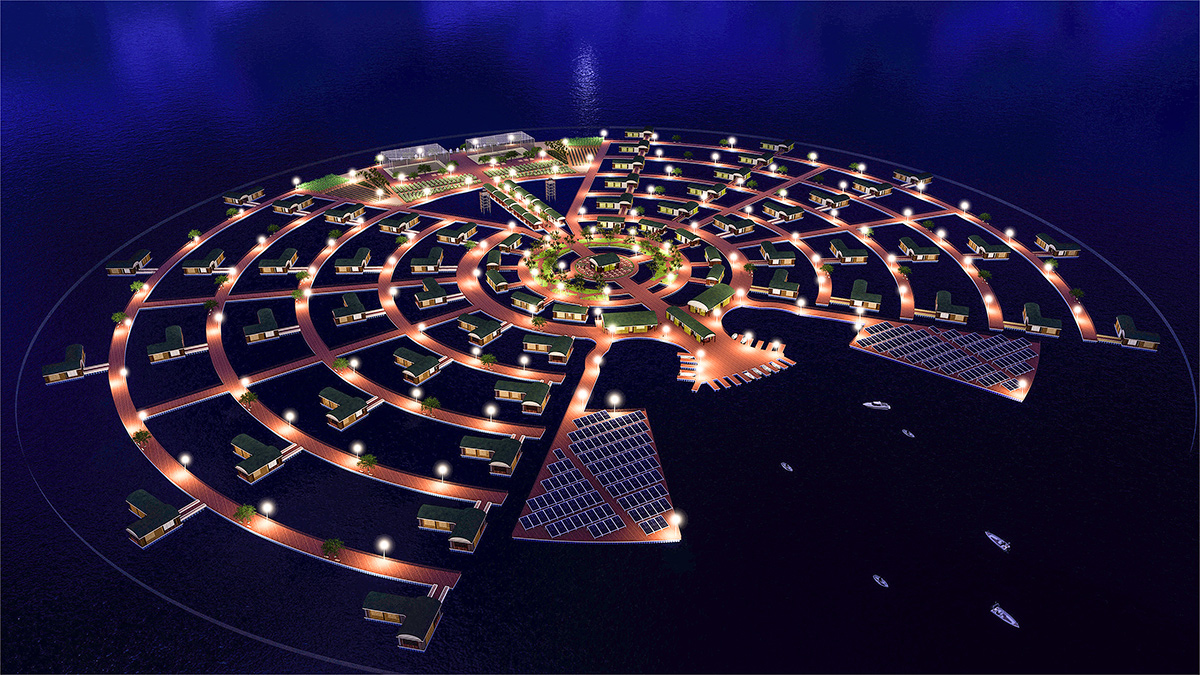 Although its contribution to global greenhouse gas emissions is lower, the African continent remains very vulnerable to the effects of climate change. In Cameroon, the question of the negative consequences of climate change is no longer a scientific issue, but a palpable and predominant problem on the territory. These include the rise in sea levels which threatens to submerge some of the country's island territories. Indeed, the island of Manoka which is the largest of the 24 islands of the island commune of the VI district of the city of Douala is considerably threatened by the rise in sea level. This constitutes a hindrance to the development of the island and makes the living conditions of the inhabitants quite difficult. Very attached to their land and their way of life, they have decided to cope with it as best they can. Unfortunately, their efforts and the methods they adopt do not allow for an effective fight against this phenomenon. In response to this situation, a young Cameroonian architect proposes a model of a floating city. 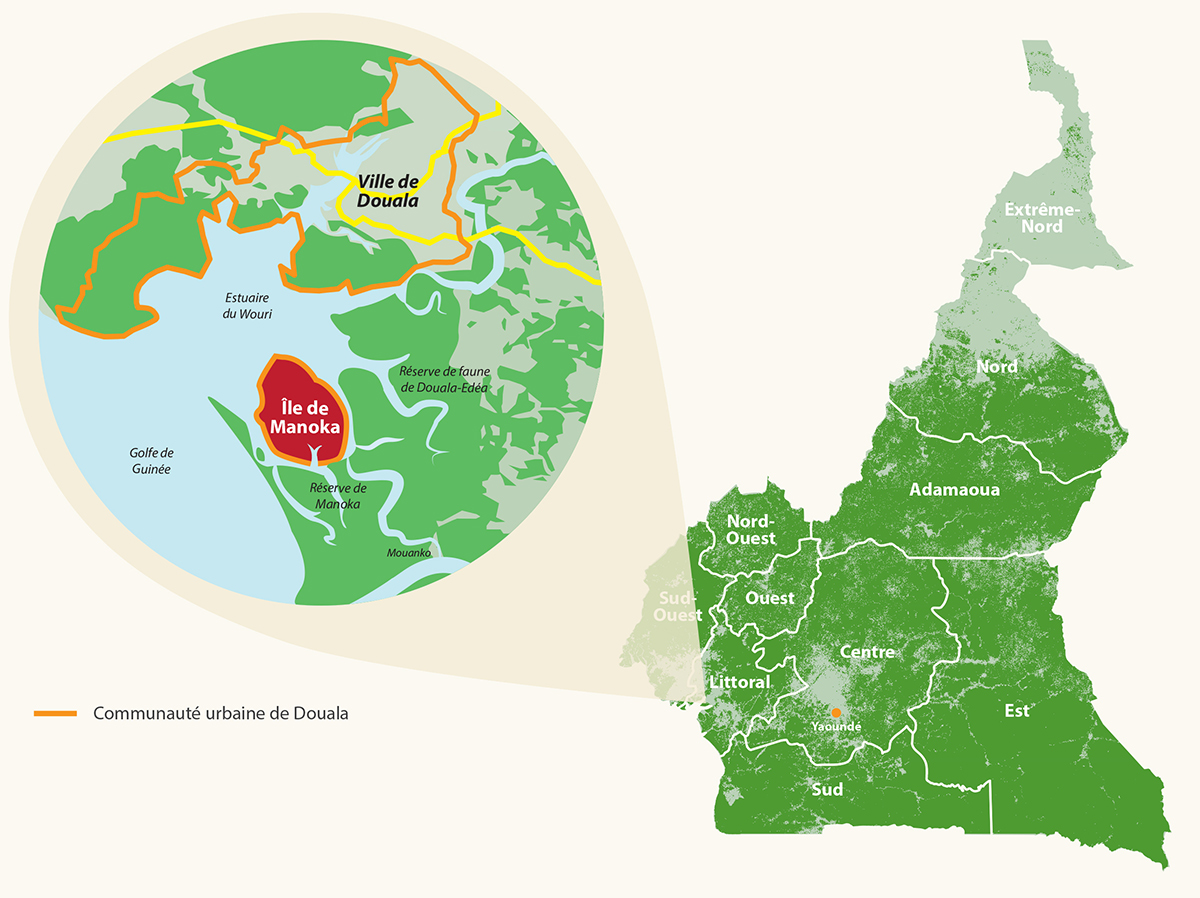 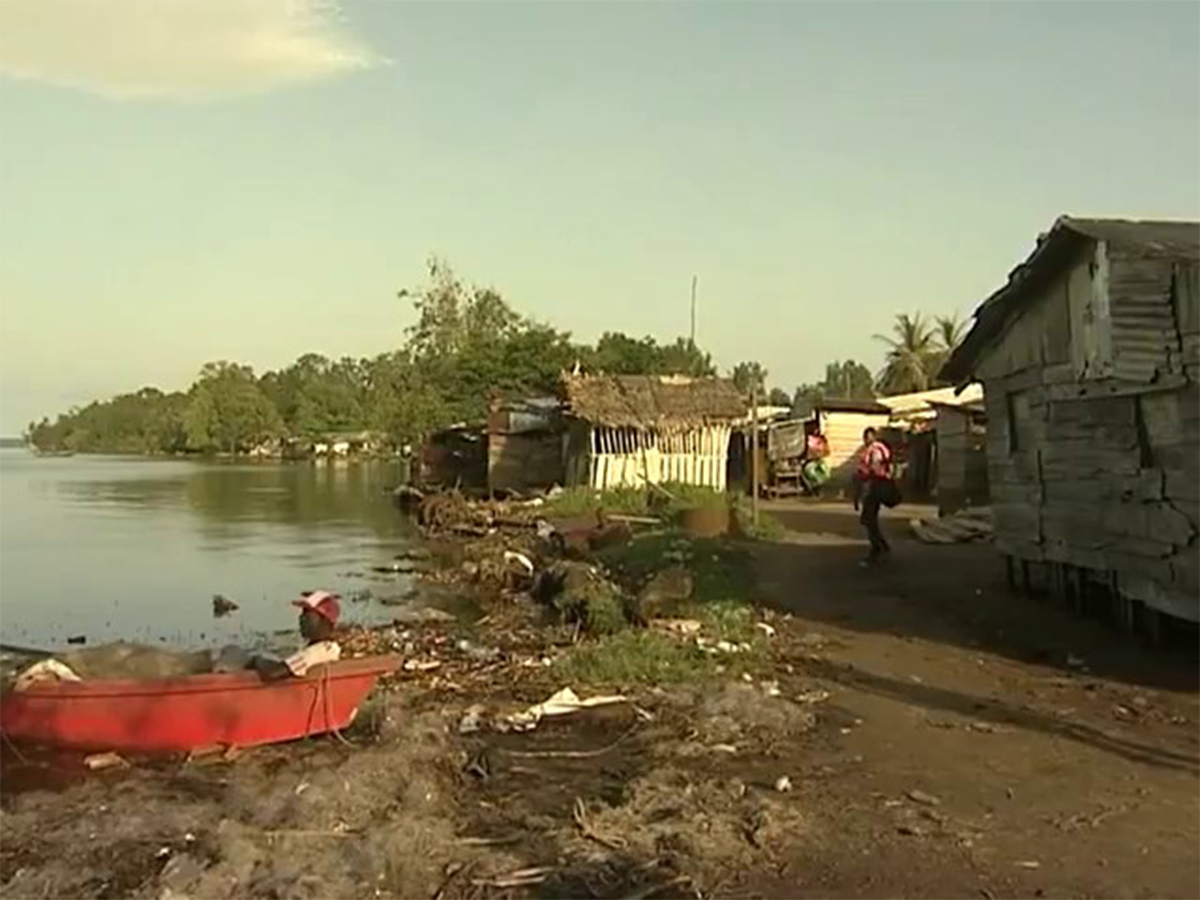 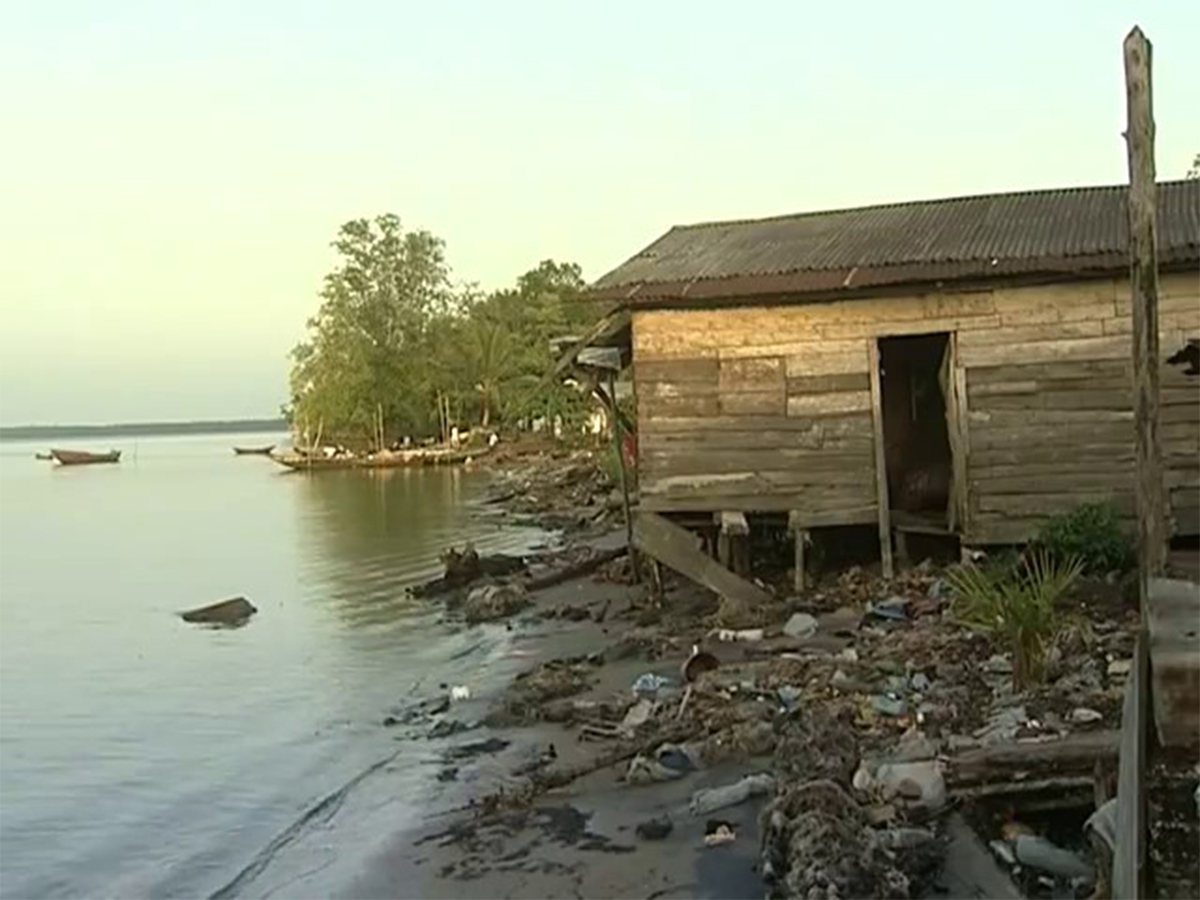 Resistance of the population to rising water through logs

Resistance of the population to rising water through quay walls

The objective of this project is the enhancement of Manoka Island. This will be achieved through the implementation of an architectural solution that will constitute a resilient approach to the consequences of sea-level rise on the island. Thus, to ensure the sustainability of the solution, several analyses and observations were collected in the field such as :

All this gives the proposal the capacity to be replicated on other islands in Cameroon that are also threatened by the same phenomenon.

As a natural response to the difficulties and demands of the population of the island of Manoka, which is a victim of rising sea levels, the project integrates the functions of housing, catering, relaxation and leisure.

In addition to the safety aspect of the project, economic activities are also taken into account, especially as it is built on the water, the fishermen's working area. Based on the quotation of the town planner Fréderic BONNET who says "The city of tomorrow cannot be made without agriculture", the city has been provided with gardens. These will allow the inhabitants to grow their own food. That said, the project is developing around fishing and farming activities. The housing estate promotes living together and offers a pleasant, warm, lively and reassuring living environment. It is designed to be practically autonomous, so as to depend as little as possible on the mainland. This floating city project is part of a bioclimatic architectural approach in relation to the water. The concept of the proposal lies in the creation of an environmentally friendly place to live, with controlled loads and zero fossil energy.

The whole city is mainly composed of a padouk wood frame system for the construction with a mixture of bamboo. The whole is supported by polyethylene (plastic) floats. The roofs are made of straw thatch. The assembly principle of the project is based on the "Mortise and Tenon" system. The project has been designed to take maximum advantage of locally available resources through the climate of the region, the orientation of the components, the building materials, the local construction techniques, the local workforce, in order to benefit from a maximum of natural and free inputs, and with a view to a bioclimatic architectural approach. The floats used in the project are mostly plastic drums. These come from the recycling of plastic waste. Finally, waste management in the city is facilitated by the use of dry toilets. These have various advantages and do not require black water treatment. 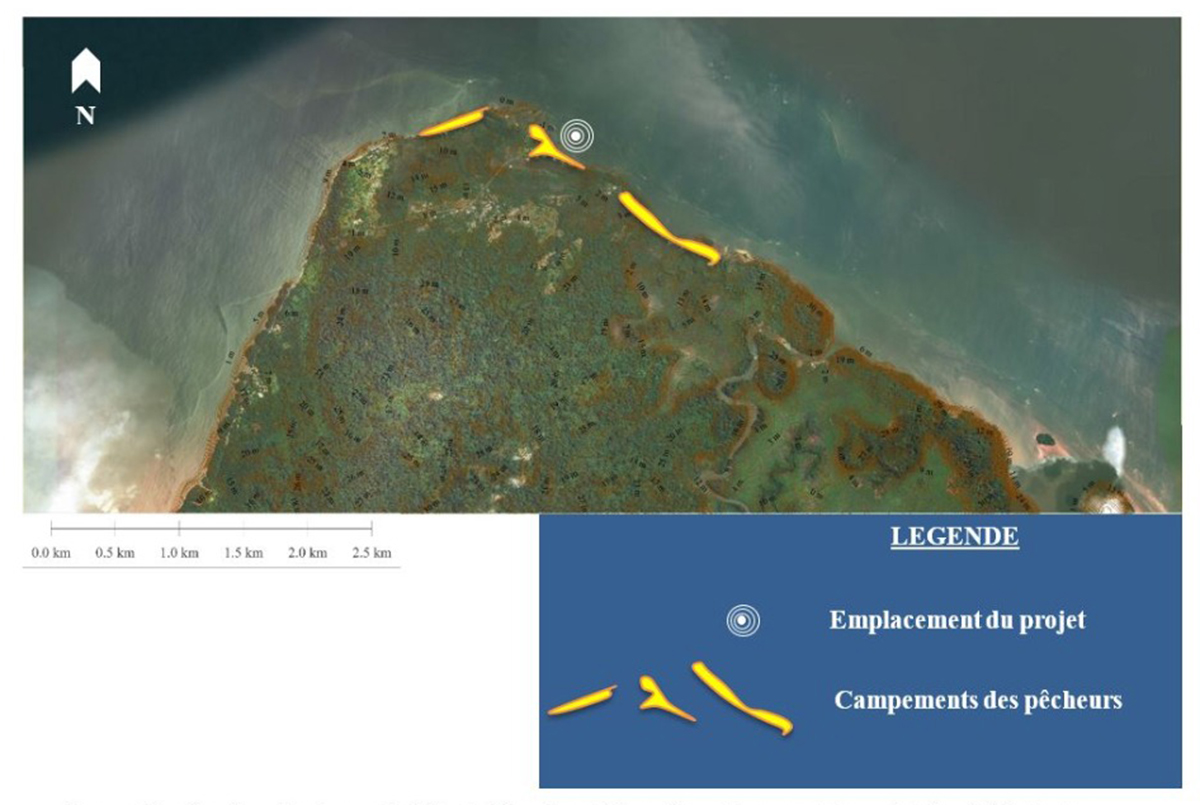 Location of the floating city 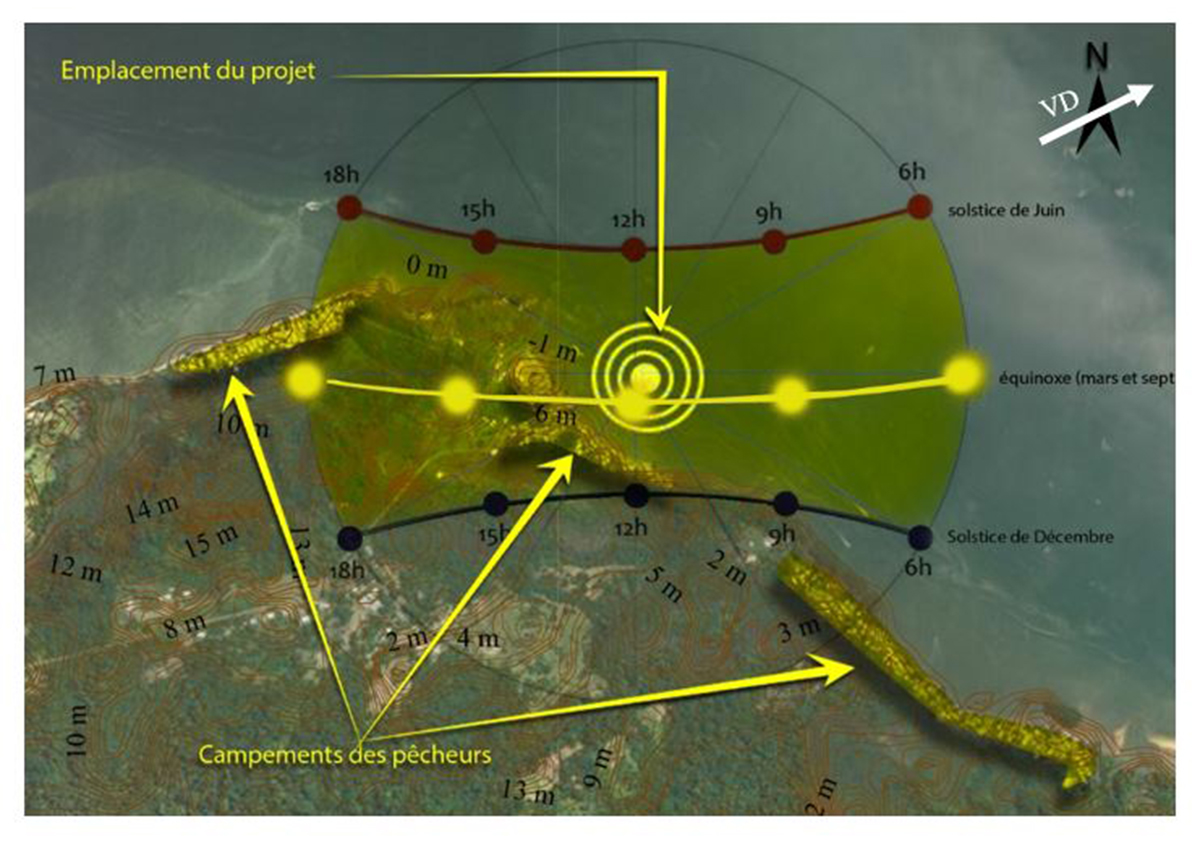 Sun's trajectory in the site 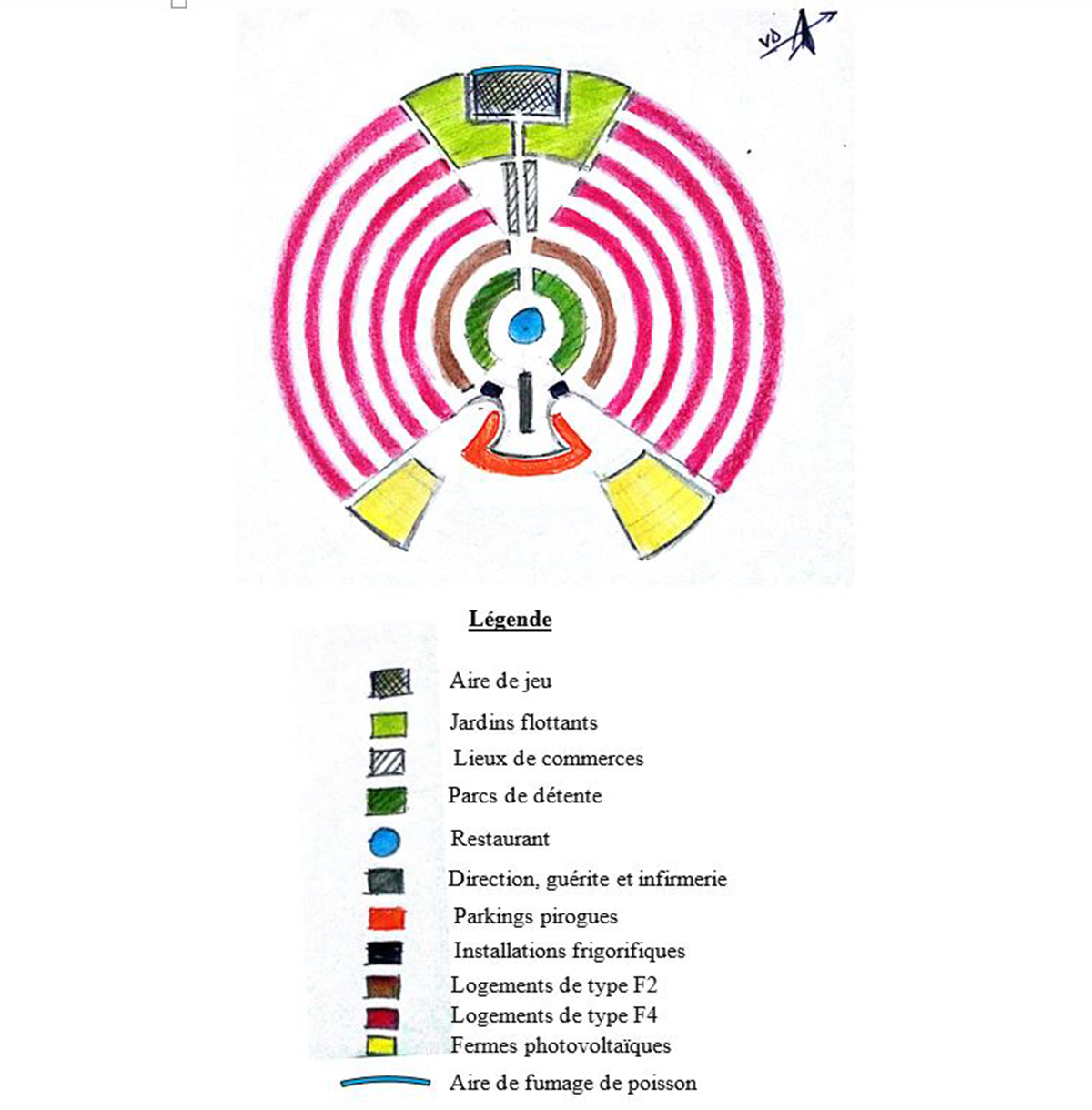 Overall organisation of the project 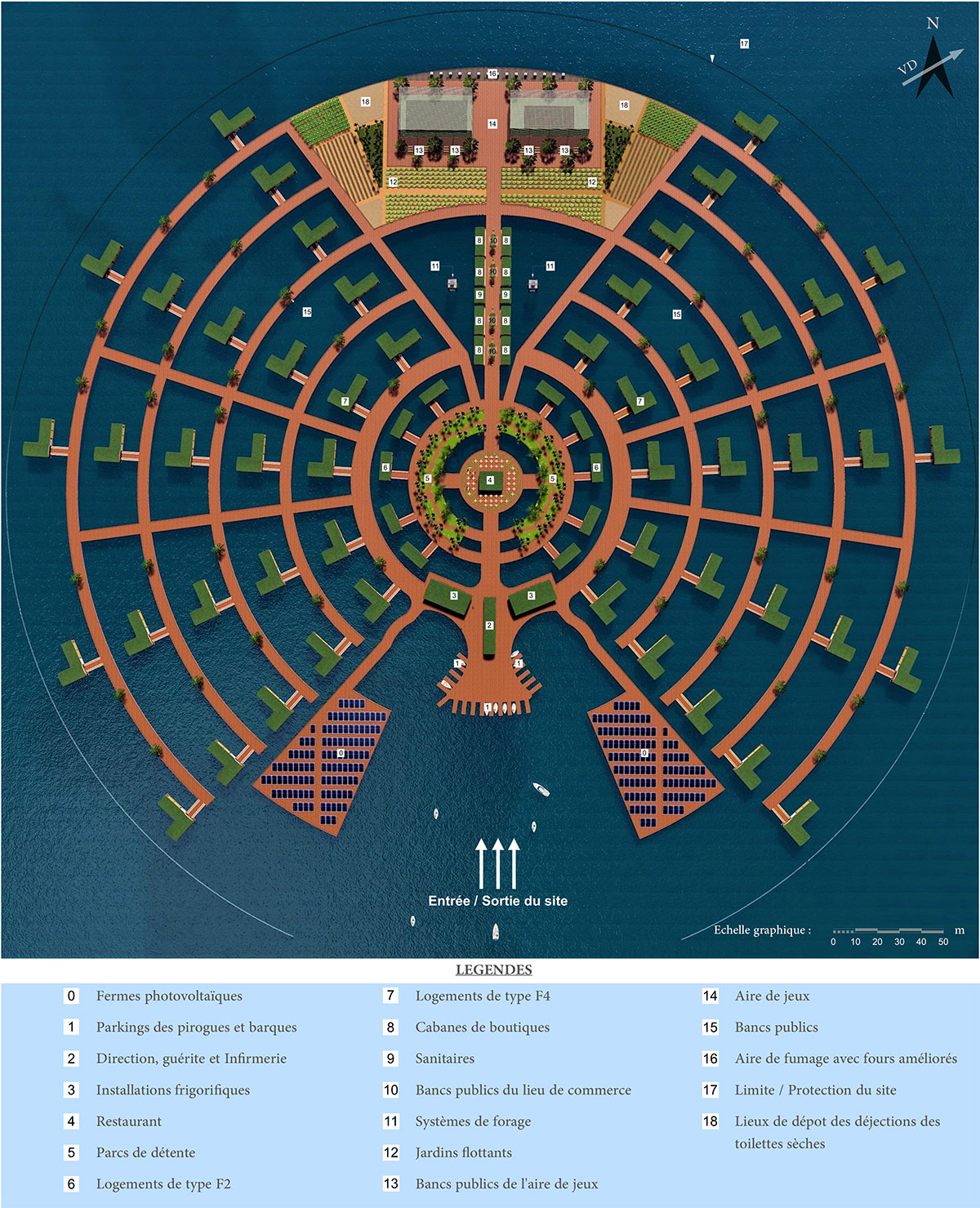 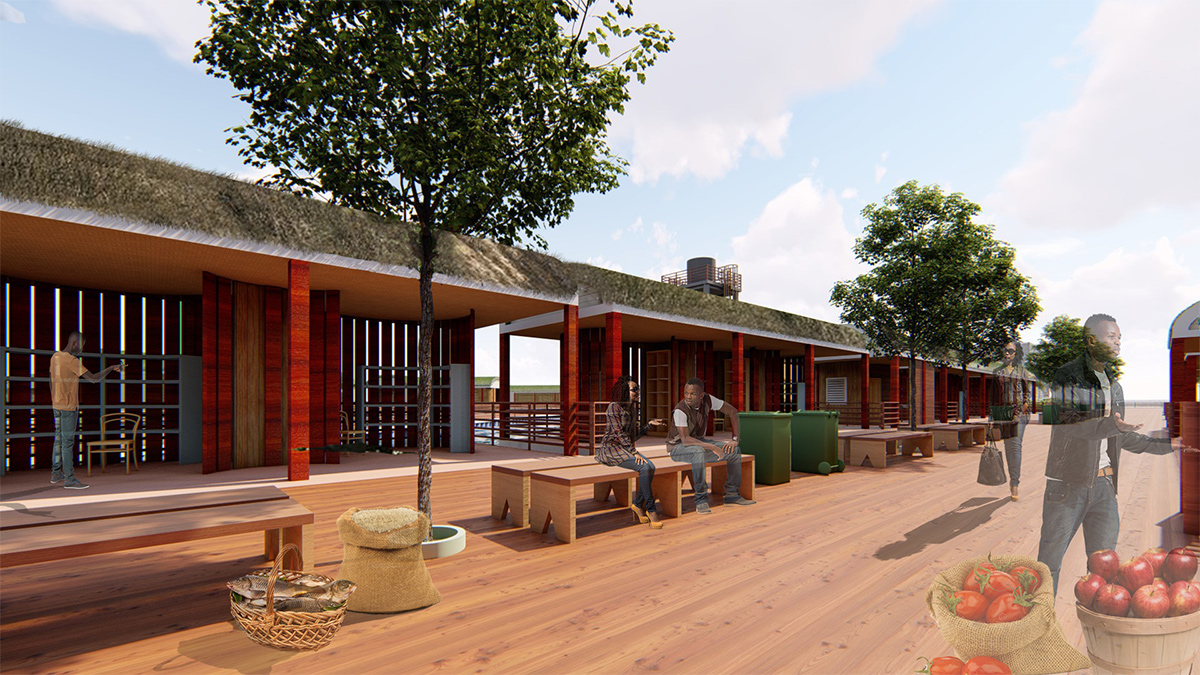 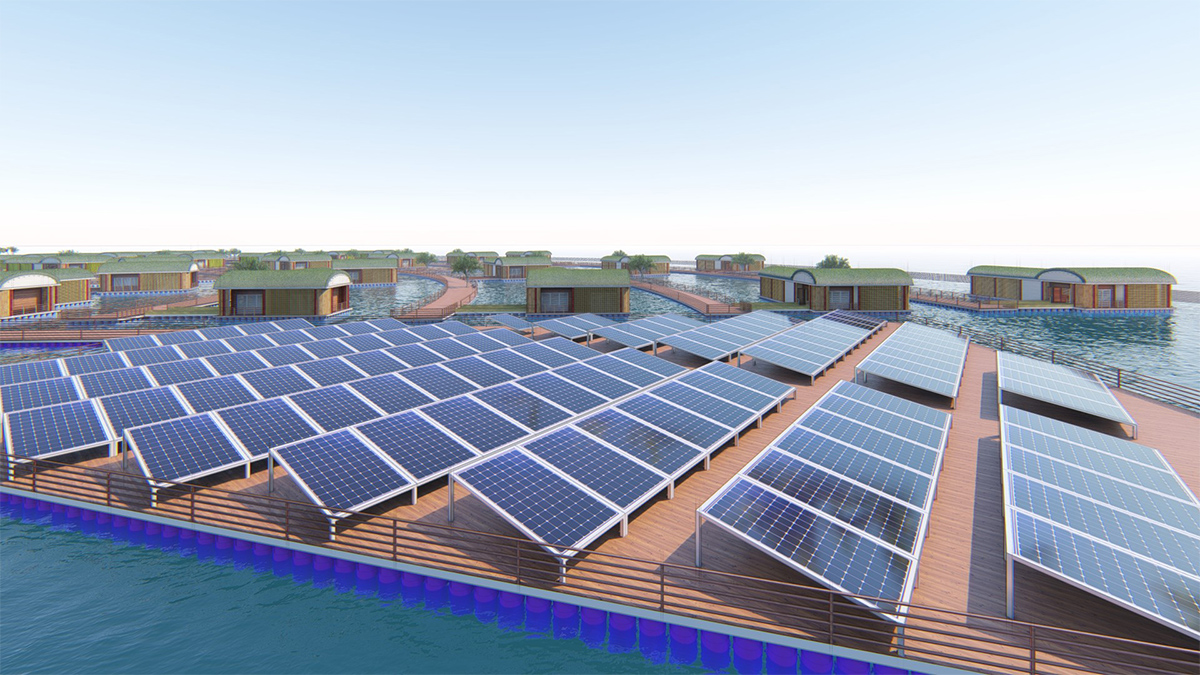 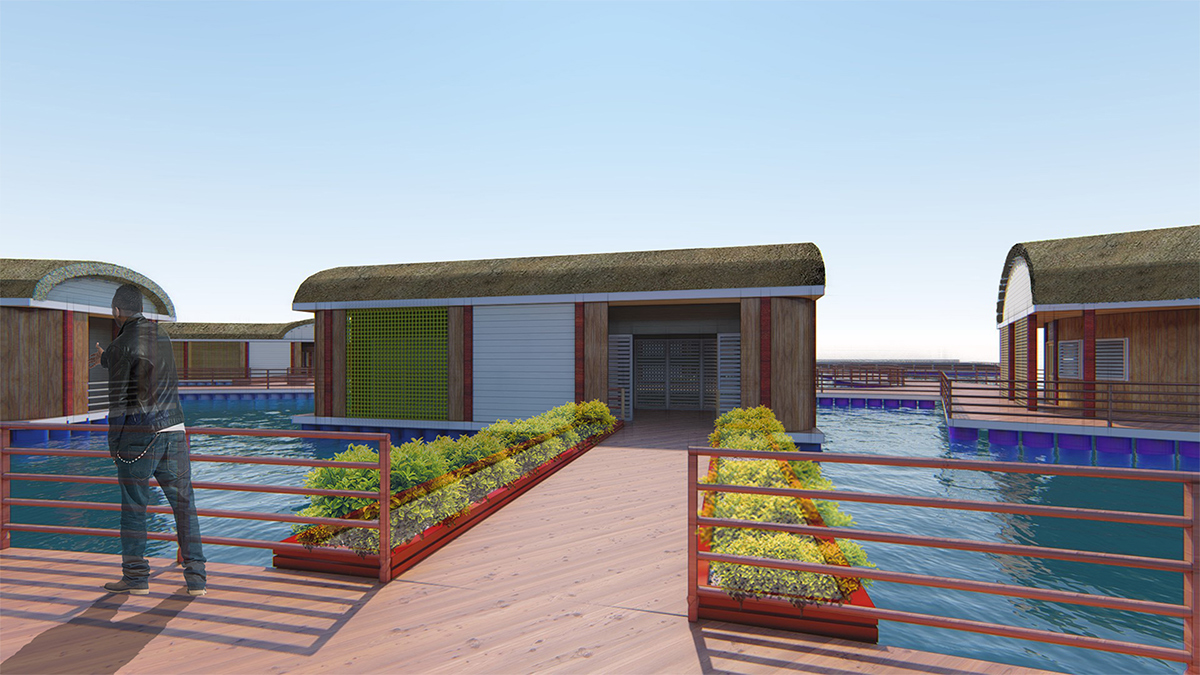 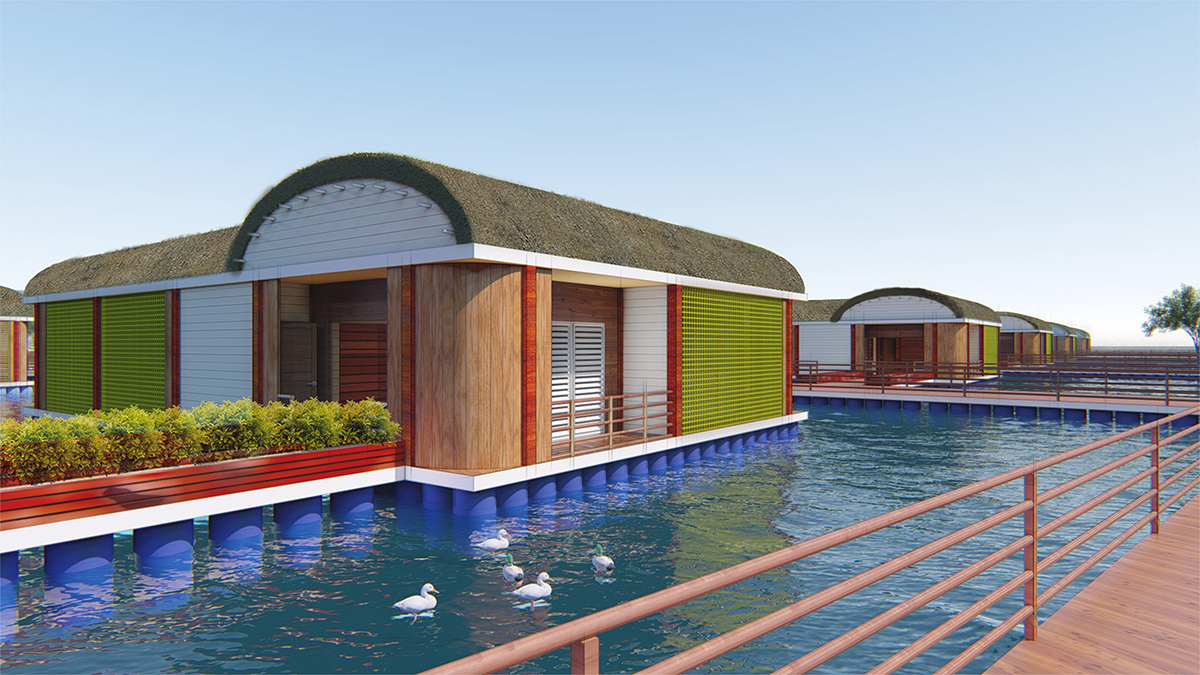 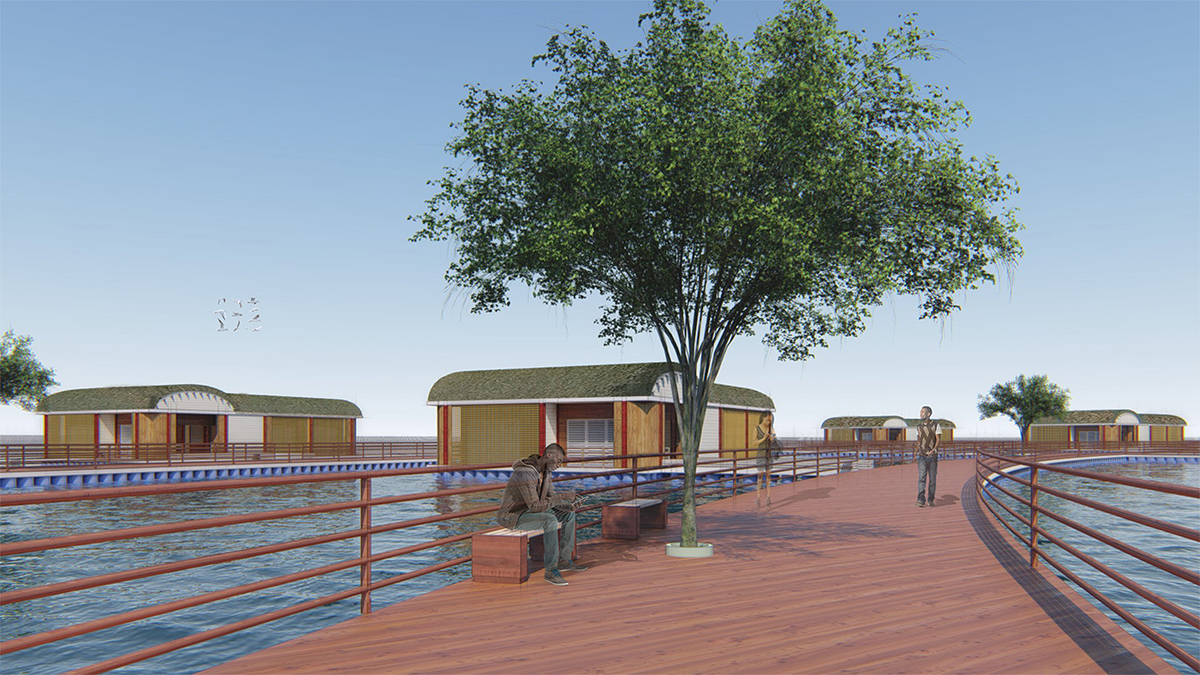 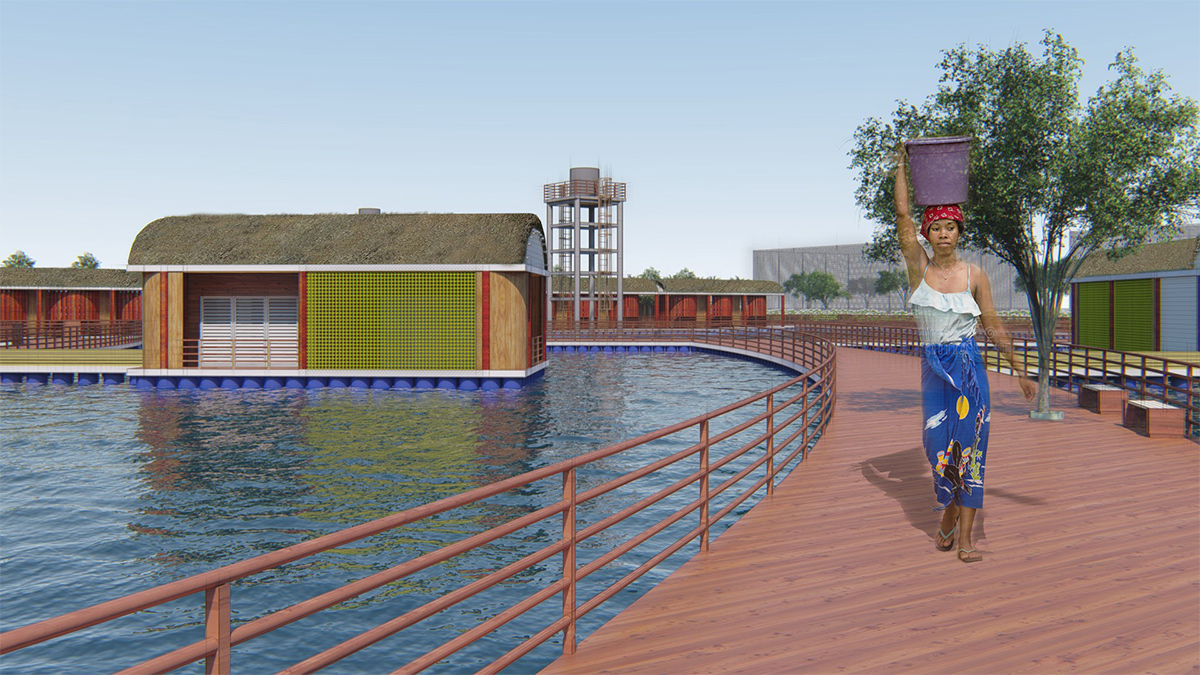 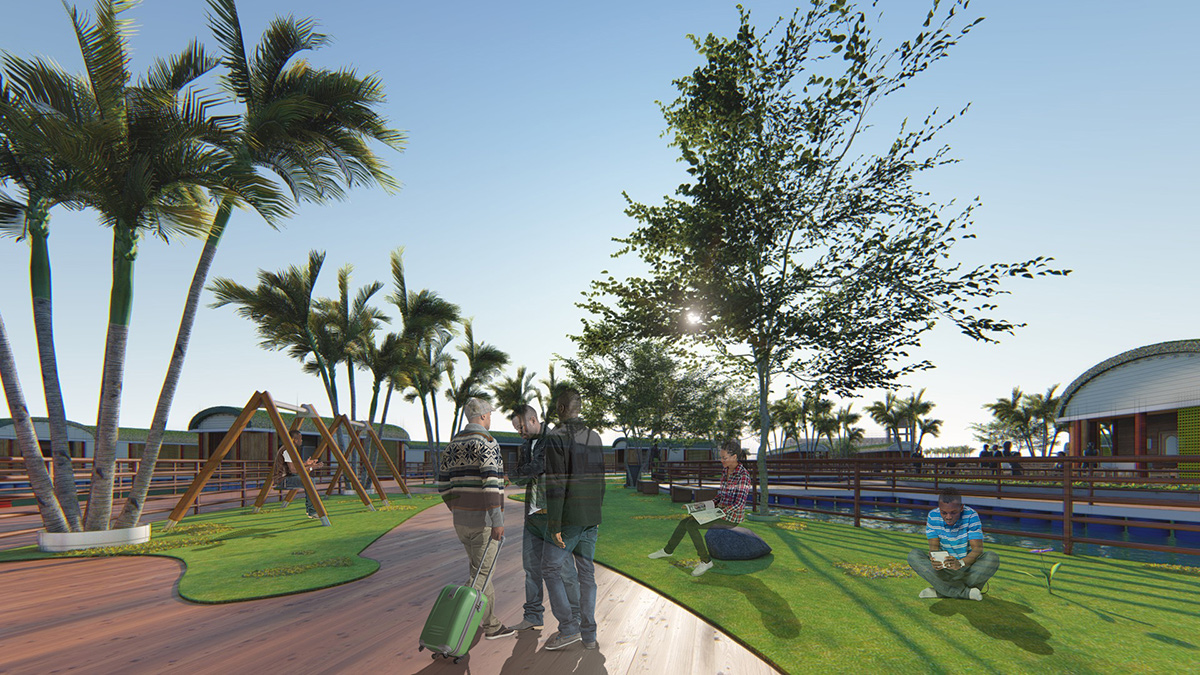 The whole project represents a modest contribution to the issue of rising sea levels on the Cameroonian coast in general, and on Manoka Island in particular.

NOUYEP TCHITCHUI Junel Urlin, a young Cameroonian Architect graduated in 2018 from the prestigious Ecole Africaine des Métiers de l'Architecture et de l'Urbanisme (EAMAU) in Togo. That year, he distinguished himself by obtaining the prize for the best personal work at the end of his master's studies in architecture. Climate change and the notion of thermal comfort in construction have always particularly attracted his attention and prompted him to propose in his projects approaches to solutions to try to overcome these constraints. Currently, he works as an architect at the Société des Etudes de Douala in Cameroon (SEDO SA).