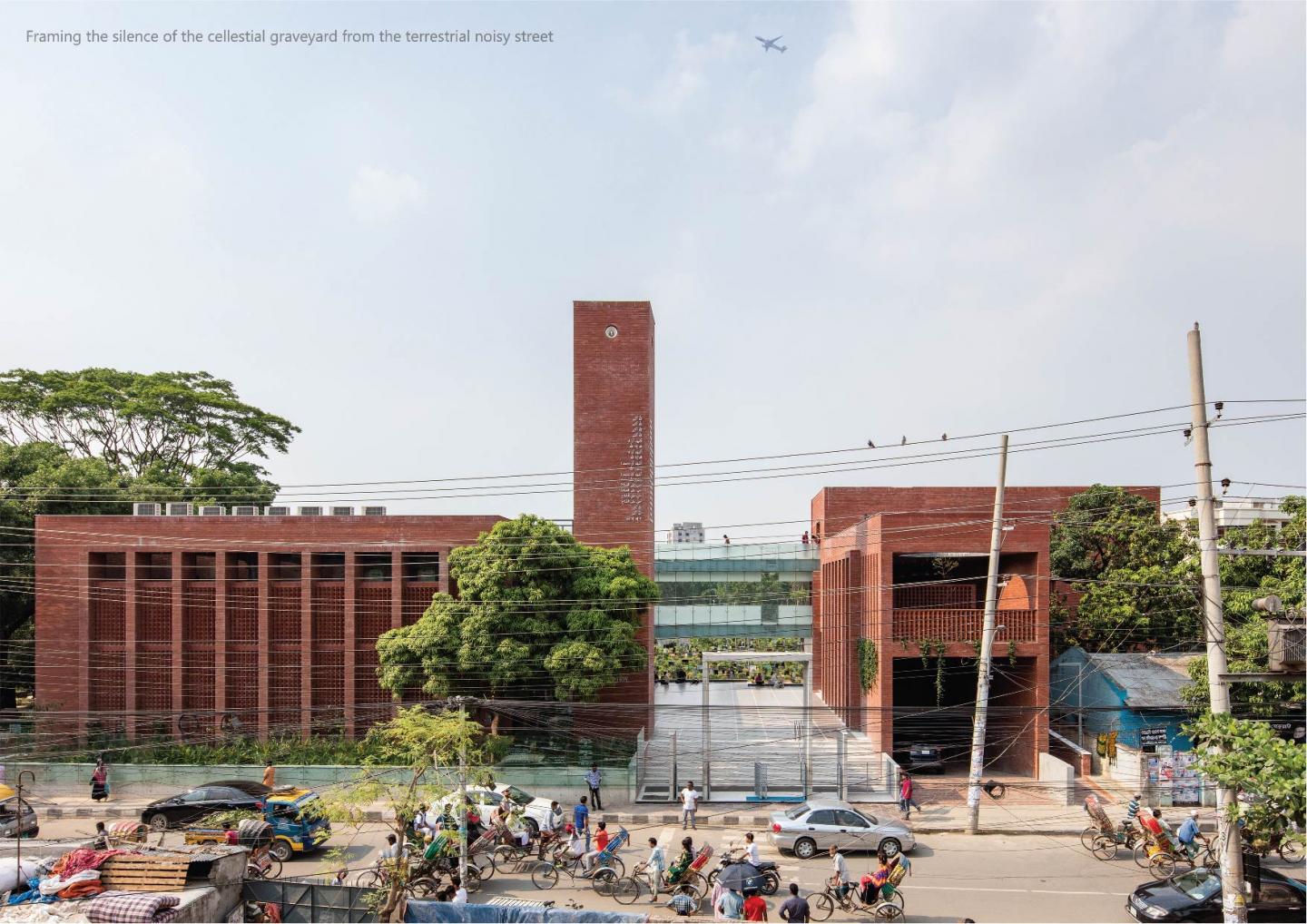 The mosque is a public project of Dhaka South City Corporation which is locatedadjacentto the 200 years old Azimpur graveyard. The users arethe people of local communityand the people whocome to bury or visit their loved one. The project's aim is to connect the celestial and terrestrial in a systematic and poetic way. The concept of the mosque was to create a transparent window between the two lives, the earthy materialistic life and the celestial life once our soul lives our body. The Mosque acts like a window which provides view of both sides, the street on the south overviews the busy life of the living, whereas the north side gives a glimpse of the resting place of the dead.
A key feature derived from the Mughal mosque in Dhaka was the “Shaan” – a type of extended open-to-sky terrace attached to the entrance of the main hall on the east at the entrance. This Shaan serves the additional 500 devotees particularly gatherings on Friday (Jummah holiday) or any other special occasions. Apart from the occasions the Shaan acts as a social hub for the local community.

The north bridge connecting the upper levels of the main buildings runs parallel to the graveyard, creating a cinematographic frame in appreciation of the departed and of life. The south wall of the bridge is made of partly frosted glass upon which a “Surah”/prayer is written while the northern side is more open to provide an unobstructed view of the graveyard. The prayer written on the south glass talks about the inevitable crossing of the proverbial bridge, making the crossing of our bridge of glass and steel more than just a method of moving the body about the mosque, but also a means of moving our spirits.

As structural system, mushroom column has been used in the main prayer hall of the mosque. Instead of traditional cylinders, these columns are shaped like trees with trunks that expand into cement canopies holding up the slabs above them, creating a forest-like environment. This indoor forest features a mix of natural and artificial lighting catered towards creating an elevating experience.

The window on the south looking road has been screened by the brick jali to reduce the temporal connection. Whereas window on the north connecting graveyard clearly open for celestial indulgence.

The Mehrab or prayer space for the Imam (the priest) has been designed unconventionally and elaborately. The whole one strip of the mosque facing the west stark brick wall is dedicated for Imam’s prayer space with day light coming from the heaven. The flow is also made of frosted glass which reflects and refracts the light within. The extended space represents the span of their influence but outside of prayer, benches and books are available for anyone to enjoy under the skylight. The western wall is also plain, touting nothing but the stark red brick it is made of as an abstract for the deep simplicity of the mosque.

The building east of the bridge contains the women’s prayer space and management team’s quarters on the upper floor with the ablution space on the ground floor. This ablution space combines traditional and contemporary designs to provide devotees with the best of both worlds. In old times, devotees were provided with open-to-sky watering holes which they could use to wash themselves prior to prayer.

Moving back around to the south-west corner of the mosque, the “Minaret”/tower features a modern rectangular design. Traditionally, a “Muezzin” – the person who calls devotees to prayer – would climb up atop the minaret for prayer calls, but the minaret in this mosque has speakers built into the top allowing the muezzin to conveniently use a microphone from below. This freed up space within the tower allowing it to be used as an elevator shaft for those who may need it. This design choice allows the minaret to still retain its traditional role while simultaneously giving it new functionality to improve convenience and accessibility.

Materials of Construction Details:
Cast R.C.C, steel, glass and brickas cladding materials have been used as construction materials. As structural system, mushroom column of concrete has been used in the main prayer hall of the mosque. This gives beam free flat slab lightly held by the mushrooms. The glazed concrete of roof and non-glazed concrete of the canopy like pillar has been used intentionally to create the refection of light in the prayer hall. The floor of the prayer hall has been lighted up by using a special type of stone. The Mehrab has been made of frosted glass to allow the celestial light to reflect on it.