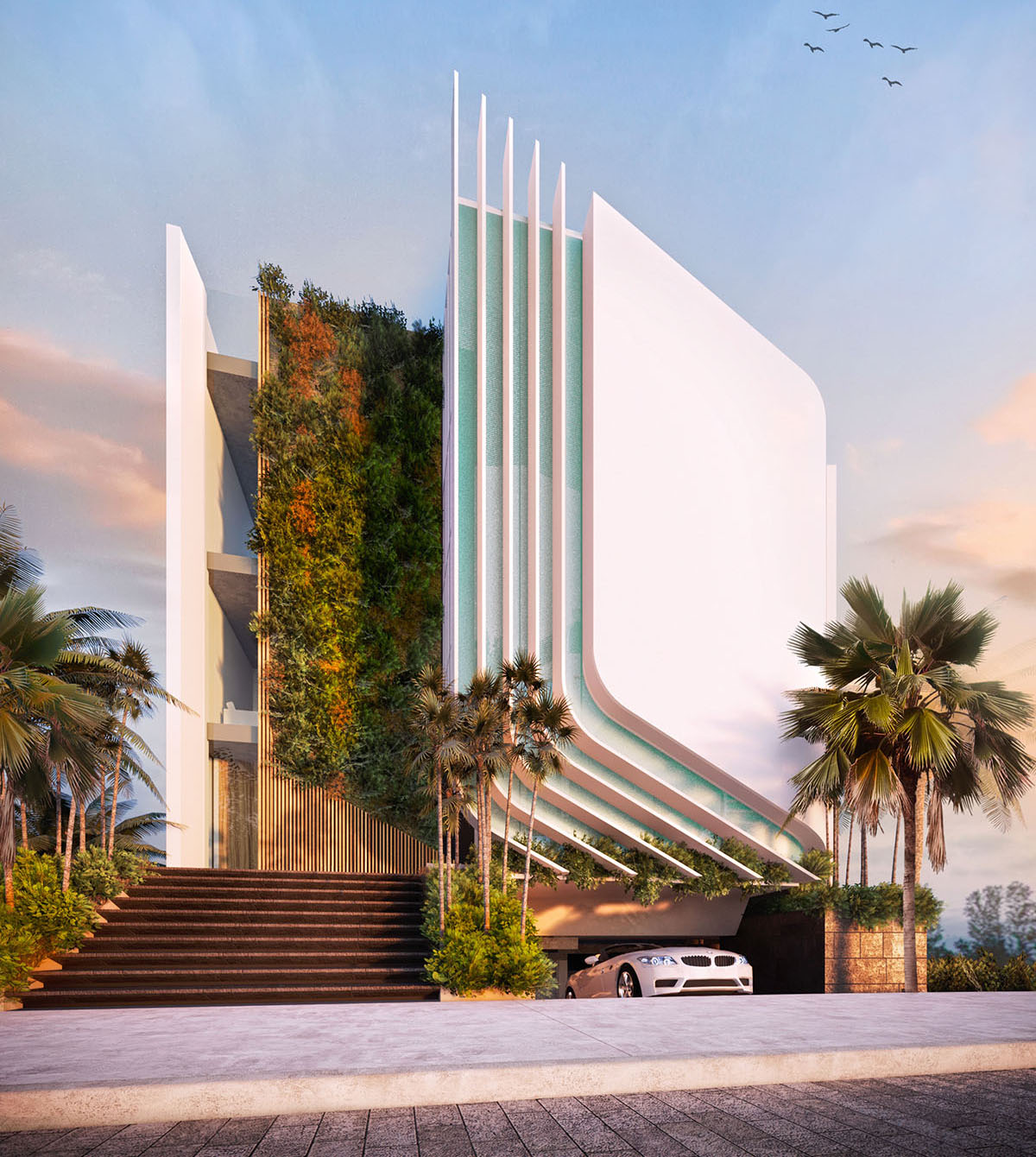 sanzpont [arquitectura] has proposed a single family house in Puerto Cancun of Mexico, designed according to a-year of climatic conditions of the region as much as possible.

Called T&N Villa, the house is composed of variations of different volumes, walls and surfaces which create different perspectives in its surrounding. The studio considered each volume separately and tilted it 64º to the left with respect to the north, oriented directly towards the prevailing winds from the front façade, while the rear façade faces northwest.

Designed exactly according to the climatic behavior of the region, the family house presents an "unsual" appearance with its fragmented mass and by proposing different spatial discoveries to live in. 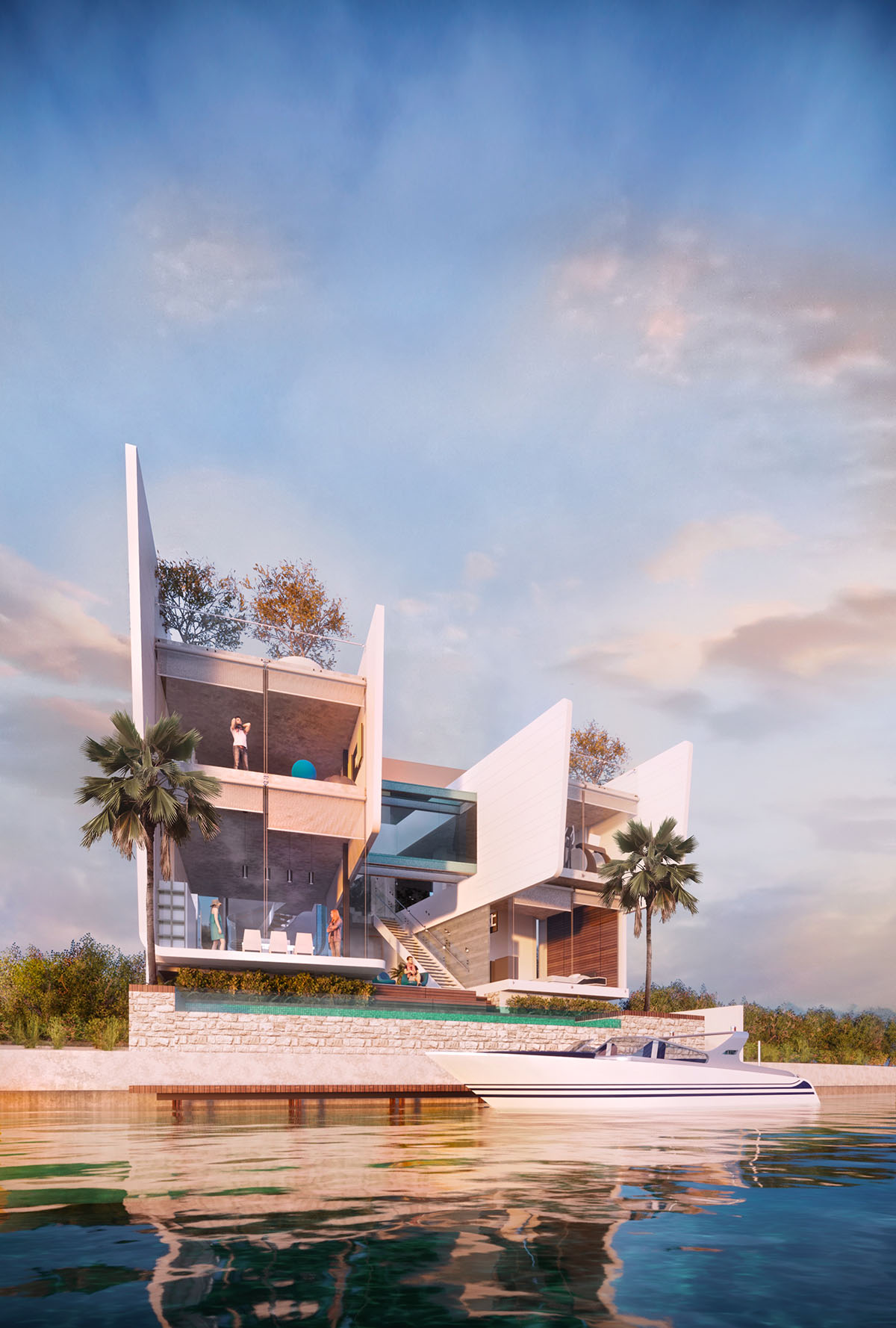 Situated on a lot numbered 125 within the subdivision “La Laguna 1” in Puerto Cancun, Mexico, the house is designed for a family. Considered as one residential home, it consists of two habitable floors, basement level for parking and a rooftop.

The entrance is accessible in the front by the street "Circuito Laguna" and its rear façade meets only with water. "The predominant view is toward the body of water, so the rear façade must have a clear line of sight so the view can be appreciated from inside the home," said the architects. 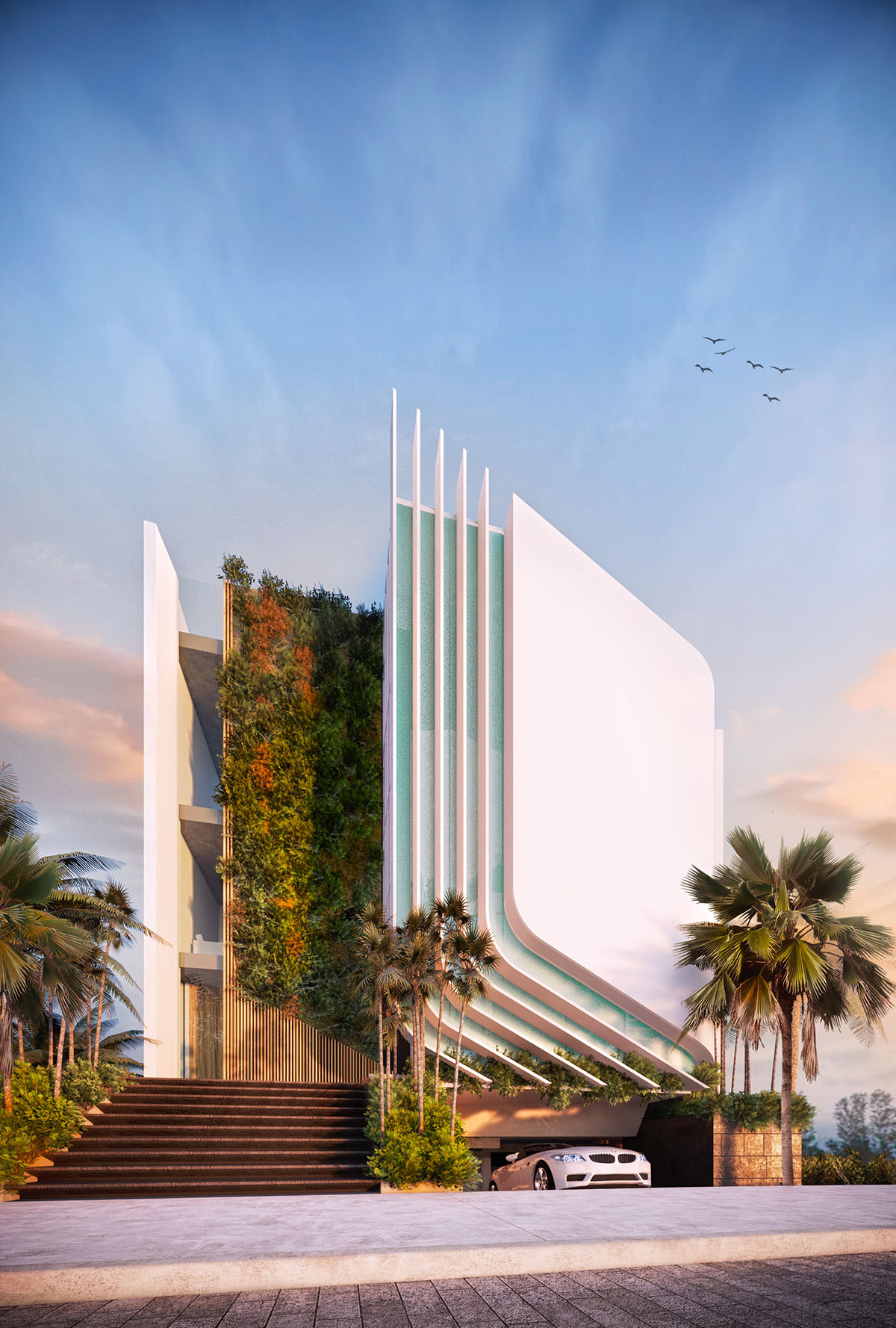 Architects specially focused on the Front Façade and the Rear Façade

The house's front façade is made up of two principal volumes, where the left volume is comprised of a green wall in combination with natural wooden ribs at the back, while the right volume is predominantly white vinyl paint. It should be noted that the glass will be tinted with light green and emerald green only in the front to provide privacy and sun protection.

The rear façade of the house is made up of walls that function as sun protection panels with grooves finished in a white vinyl paint.

The glass will be laminated with UV protection and tinted green at the volume of the bridge. Also as sun protection, roller blinds made of light silver colored, non-reflective "Serge Ferrari" material will be installed. A light colored quarry stone will be at the edge of the lot. 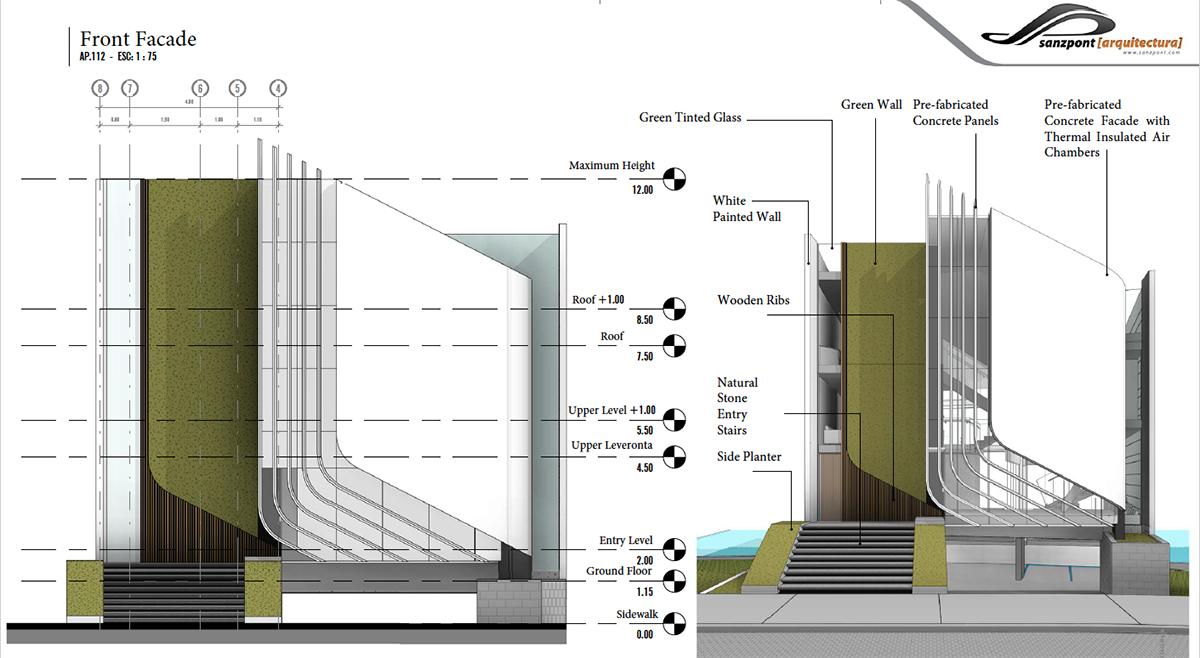 Architects developed a specific Climate Analysis on the house

With these graphs, we have a clear idea of climatic behavior throughout the year, and in different seasons, with the objective of implementing the most effective bioclimatic strategies to achieve the highest level architectural comfort.

In the bio-environmental comfort graph, it is observed that the climate throughout the year is located in the pink area, which indicates that the strategy to follow to achieve thermal comfort in architectural spaces should be.

In the previous graph, the percentage of comfort that is covered throughout the year by the selected bioclimatic strategy is observed. As you can see, the natural cross ventilation is less efficient in the summer (as shown on the cooling strategies graph on the previous page), and it is recommended to reinforce with artificial ventilation.

The predominantly solid mass of the structure avoids direct exposure to thermal radiation. A green wall was integrated into the main façade, which reduces the interior temperature. In addition to acting as thermal insulation, this will also generate significant energy savings. 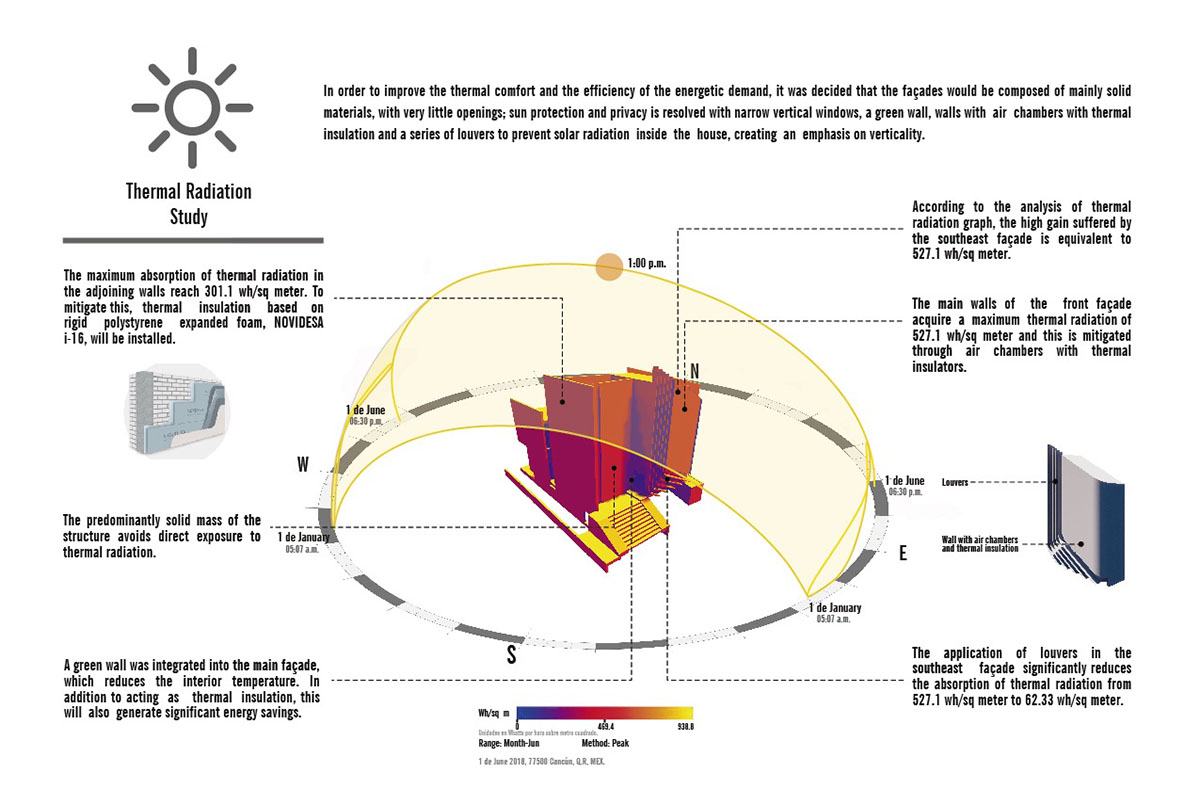 In order to improve the thermal comfort and the efficiency of the energetic demand, it was decided that the façades would be composed of mainly solid materials, with very little openings; sun protection and privacy is resolved with narrow vertical windows, a green wall, walls with air chambers with thermal insulation and a series of louvers to prevent solar radiation inside the house, creating an emphasis on verticality. The northeast area was designed to offer a pleasant view of the channels of Puerto Cancun, however, the thermal radiation reaches levels of 518.3 wh/sq meter. In order to achieve energy efficiency in this area of the house, one of the fundamental aspects is solar protection, which prevents overheating inside.

In order to reduce the energetic demand, the solar energy is reflected outside the living space by properly controlling the sunlight. In the roof garden, panels will divert direct sunlight and practical, roll-on solar protection membranes will improve thermal comfort and reduce energy consumption. 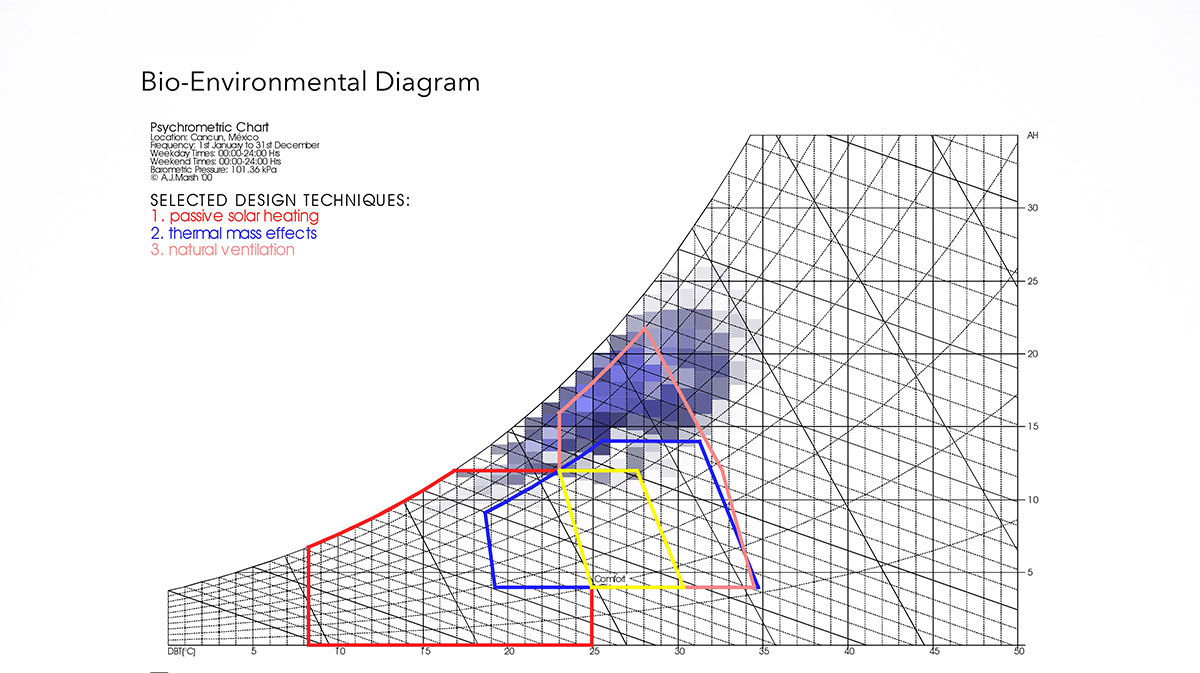 According to the thermal radiation analysis graph, the high gain suffered by the northeast façade is equal to 518.3 wh/sq meter. As a strategy to mitigate the high thermal gain, a roll-over solar protection membrane will be implemented.

The "Serge Ferrari" façade acts as a solar protection membrane and effectively limits overheating by blocking up to 97% of the heat for increased comfort and lessens the need to  useair conditioning equipment. By implementing a roof garden, the need to use air conditioning equipment will be reduced by up to 25%. The side panels act as a device that deflects direct sunlight from the curtain walls. 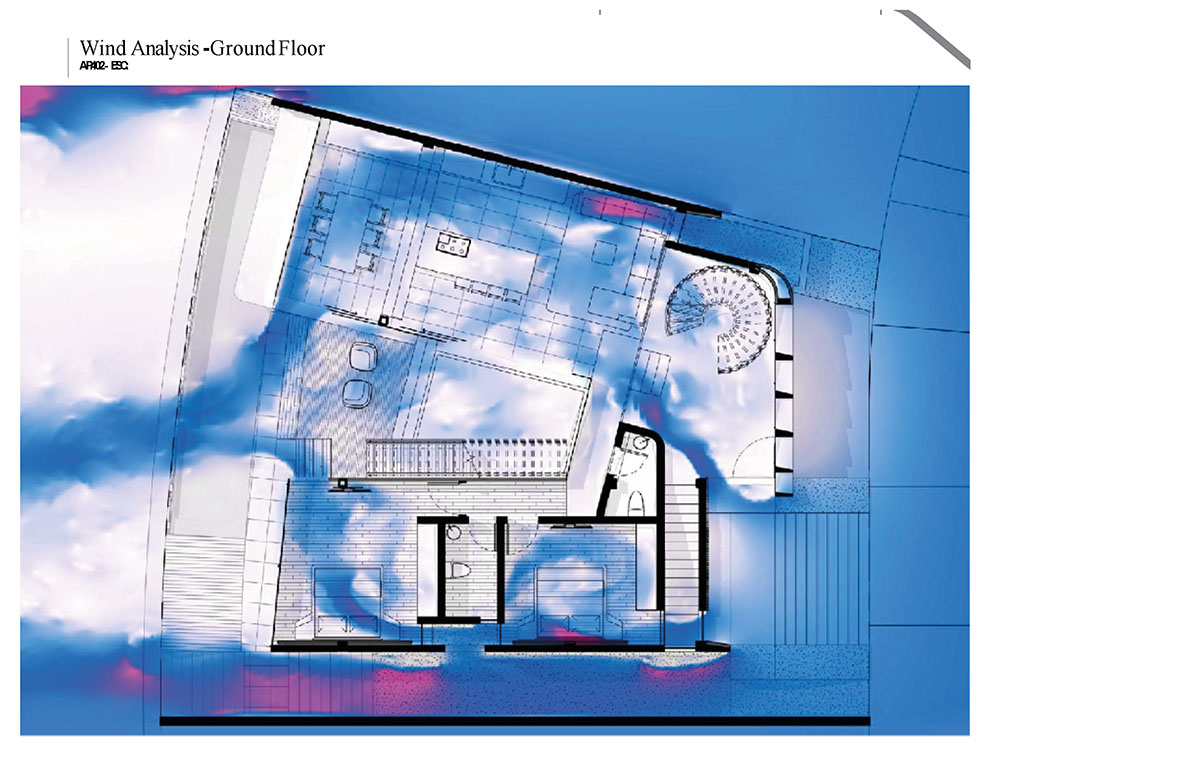 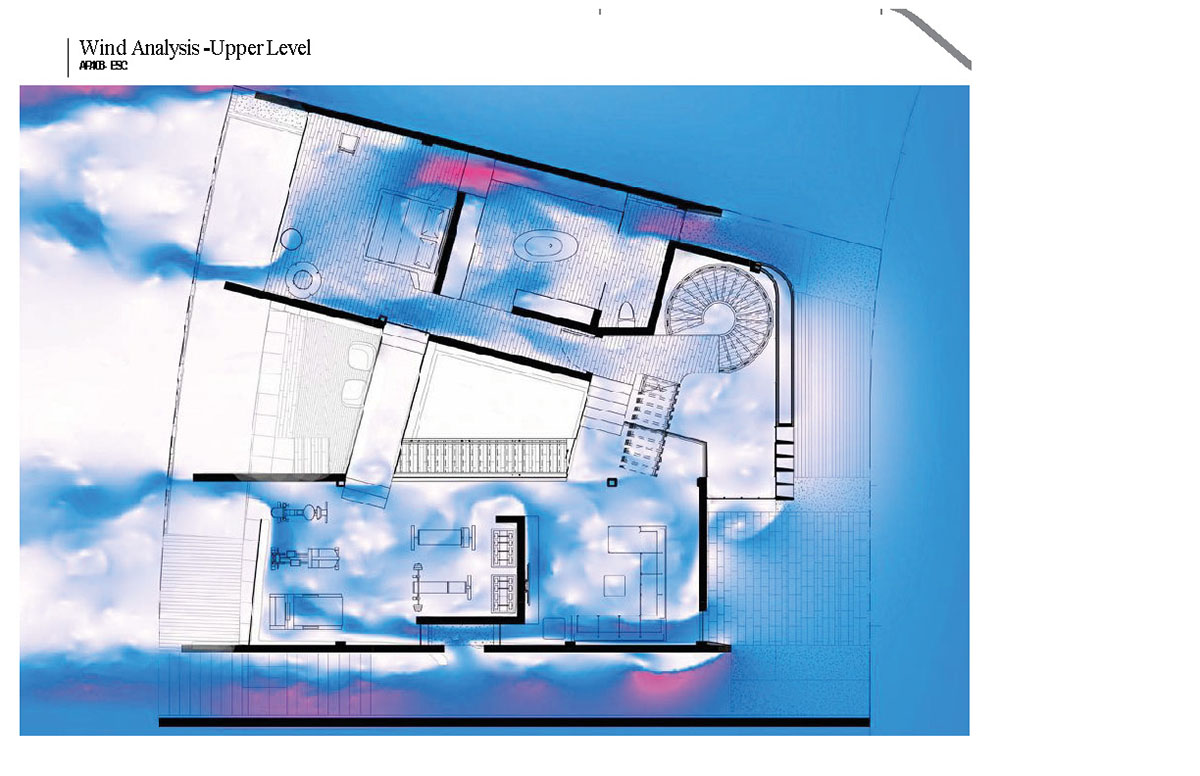 All images courtesy of sanzpont [arquitectura]