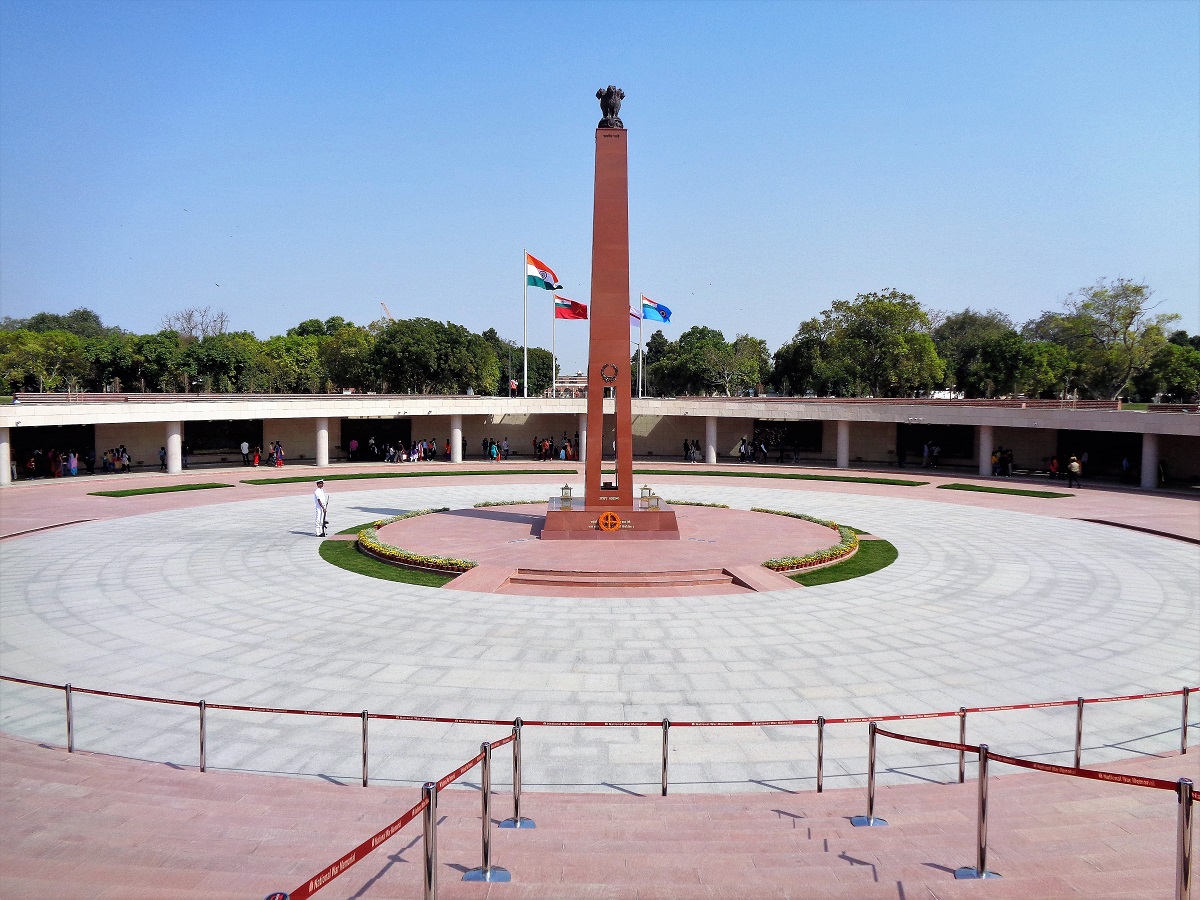 Recently built, a state-of-the-art, National War Memorial at New Delhi has been dedicated to the nation by the Prime Minister of India, Narendra Modi on February 25, 2019. With the completion of this memorial, about six-decade-old demand of Indian armed forces and their veterans has been fulfilled. The memorial is a tribute to over 25942 soldiers from Indian Army, Air Force and Indian Navy who attained martyrdom in all the wars India fought after Independence in 1947. 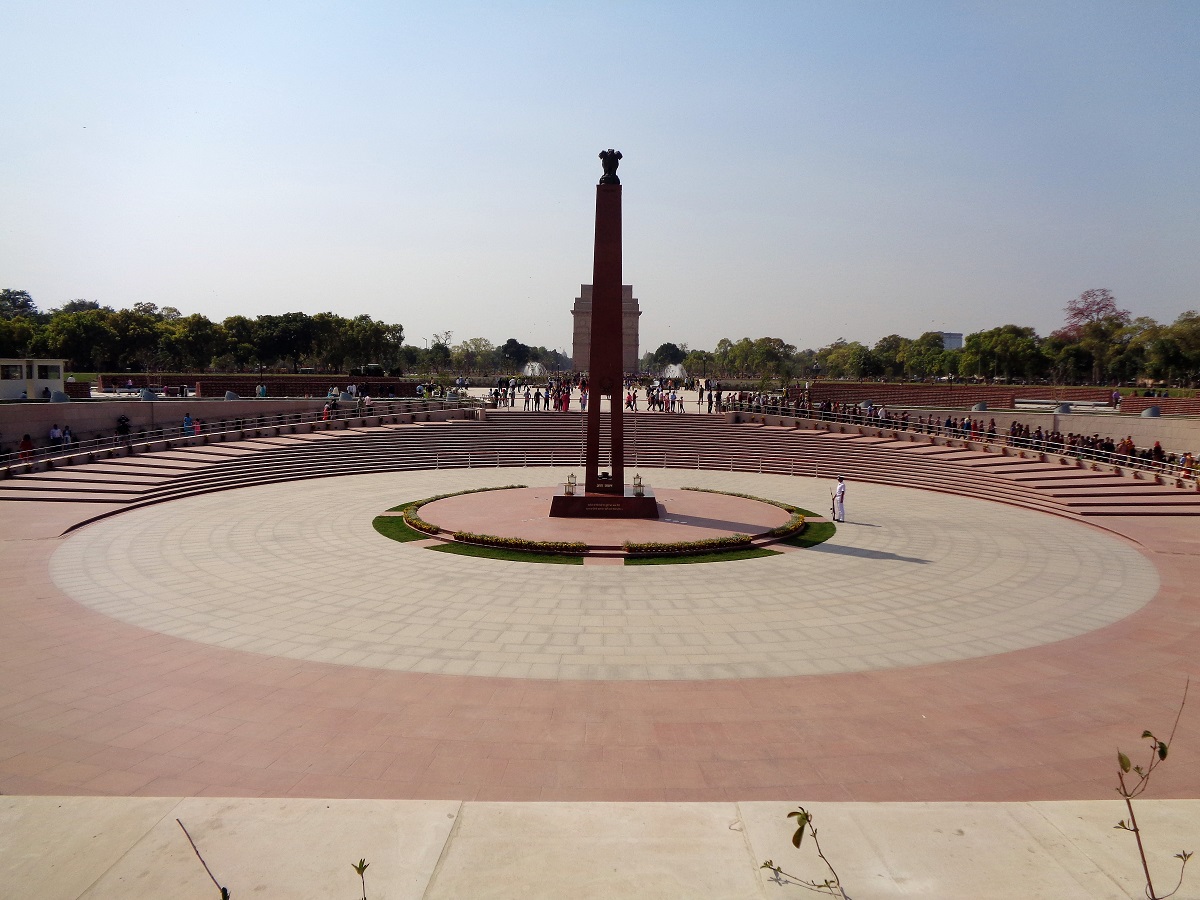 The memorial has been designed by a Chennai-based architectural practice ‘WeBe Design Lab’ headed by architect Yogesh Chandrahasan. The firm got the commission to design this prestigious project through a global design competition held in 2016-17 in which 427 firms participated. Built at a cost of Rupees 176 crores, the memorial has been got constructed by the Military Engineering Services in a very short span of time of about 20 months. 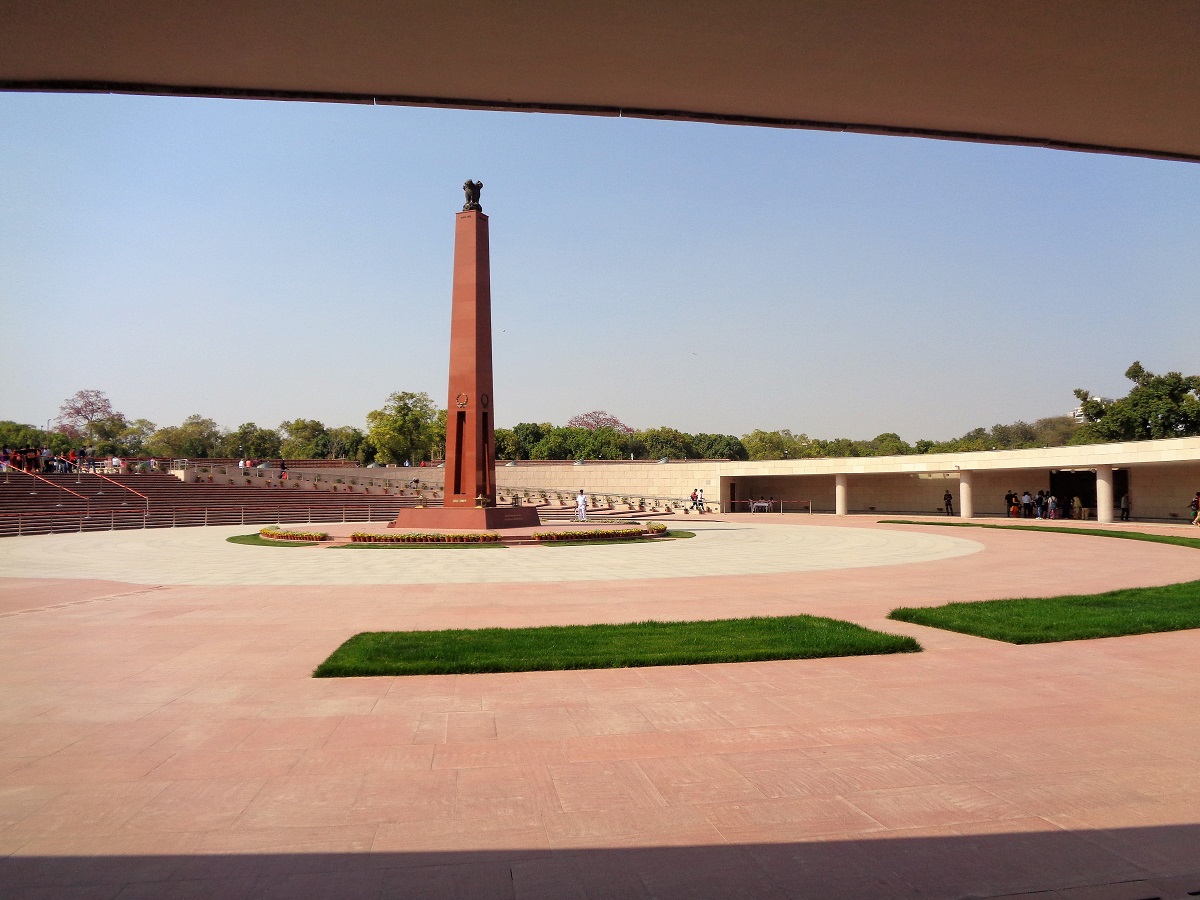 The National War Memorial is located near India Gate in the heart of the Lutyens’ Zone of New Delhi Capitol Complex. It is spread over an area of 42 acres which falls at the culminating point of prestigious Raj Path on the east. The Raj Path is the strong central axis of the Capitol Complex which connects the India Gate with the Rashtrapati Bhavan and ends in the circular Mughal Gardens in the presidential complex.

Like the Mughal Gardens at the west end of the Raj Path, the Lutyens’ plan envisaged a similar garden on its east-end near India Gate. This site has now been befittingly utilized by the National War Memorial. Keeping in view the historical importance of this site and the guidelines of the Central Vista Committee, the memorial has been planned as a subterranean facility with built-form not exceeding 1.5m above the ground level. The design of the memorial is thus in sync with the character of the existing open space and aesthetical sanctity of Lutyens’ planning.

The design concept of the National War Memorial is based on ‘Chakravyuha’ ­- an ancient circular battle formation for laying an efficient trap for the enemy. Based on this concept, the architects created an experience of walking amidst soldiers in a war field in different layers. The circular plan of the memorial incorporates five concentric rings of varied elements. These rings serve different functions and convey different emotions. 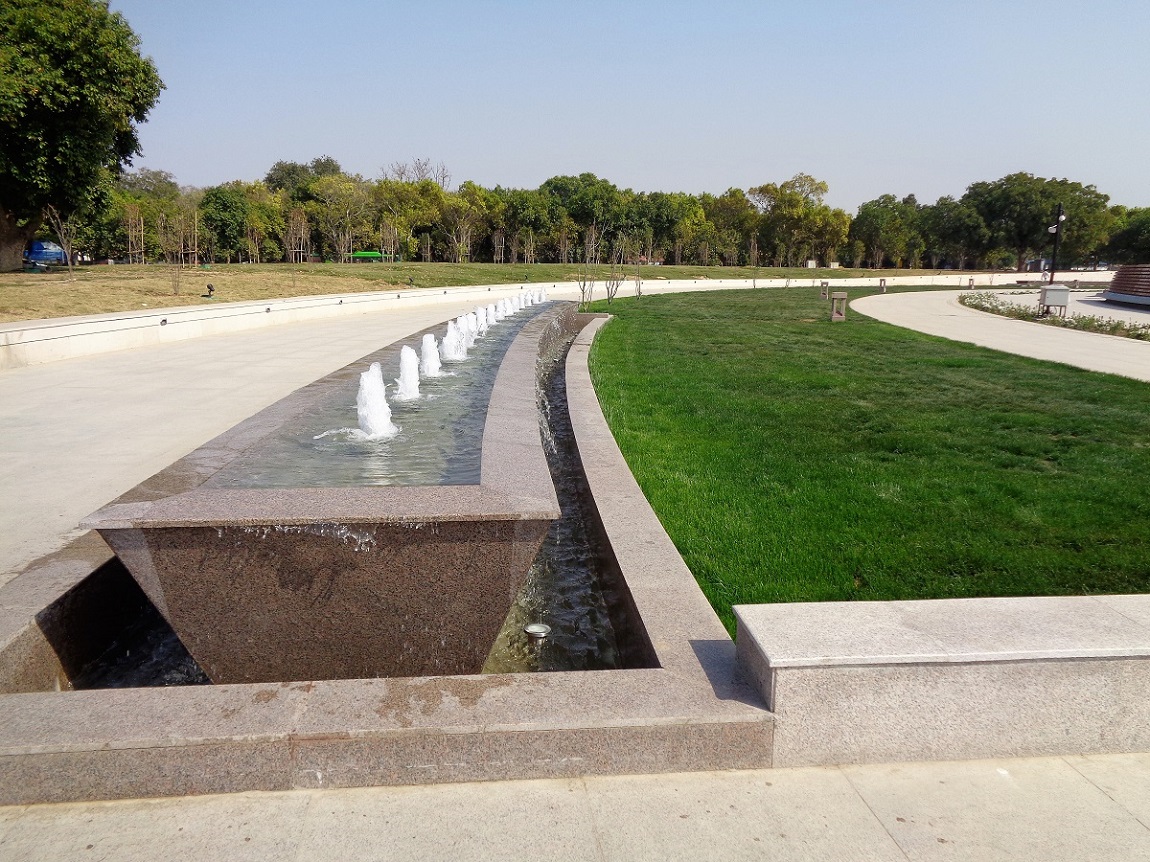 The outermost layer is conceived as ‘Circle of Protection’ or ‘Rakshak Chakra’ which personifies the territorial control of the armed forces. On the ground, the ‘Rakshak Chakra’ has been translated in the form of the thick jungle by planting more than 600 trees in a circular arrangement. When these trees will be fully grown, this space will give a feeling of walking through a fleet of disciplined soldiers who are deployed to protect their country. 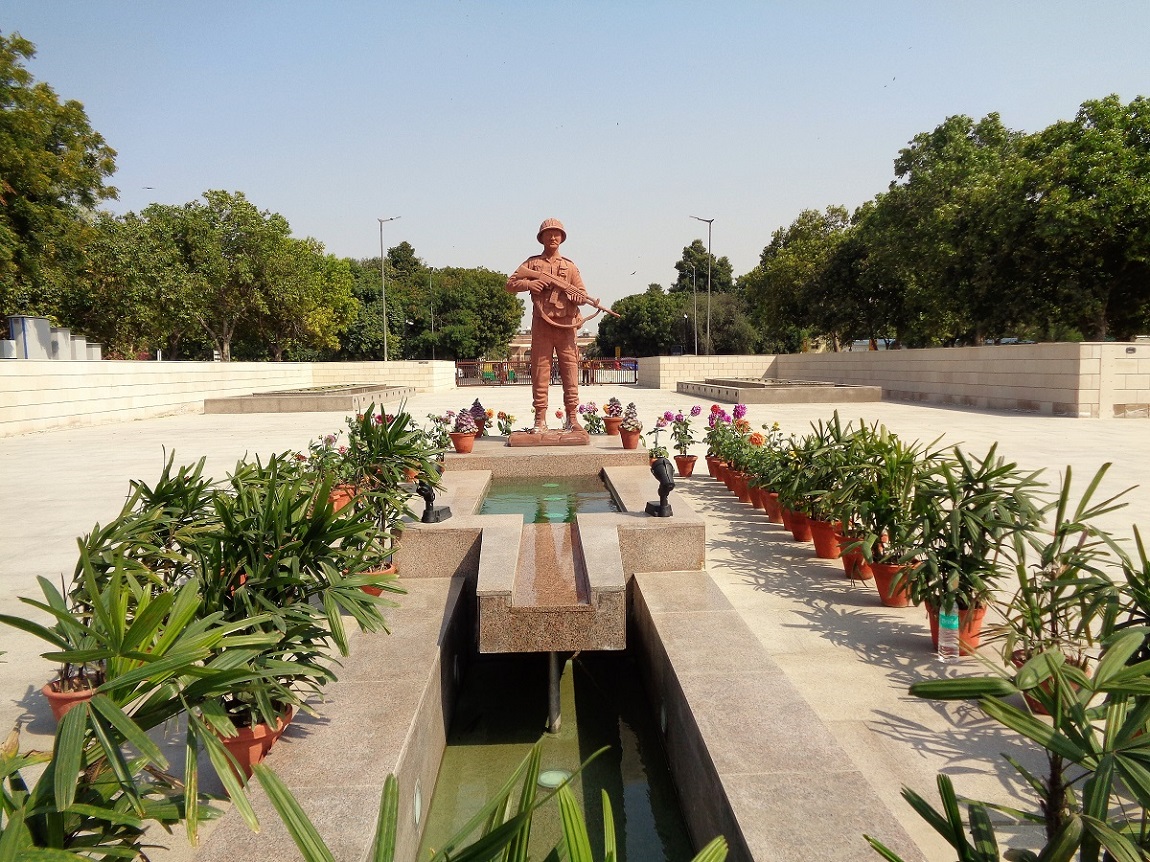 The second concentric layer is called the ‘Circle of War’ or ‘Yudh Path’. This is a wide paved footpath which runs on the inner side of the ‘urban jungle’ in the outer circle. It gives ceremonial access to the memorial from all the four directions. This Yudh Path’ also holds two underground galleries and convenience stores at the north and south end. The galleries are aimed to provide information on the history of some of the important battles fought by the Indian soldiers. 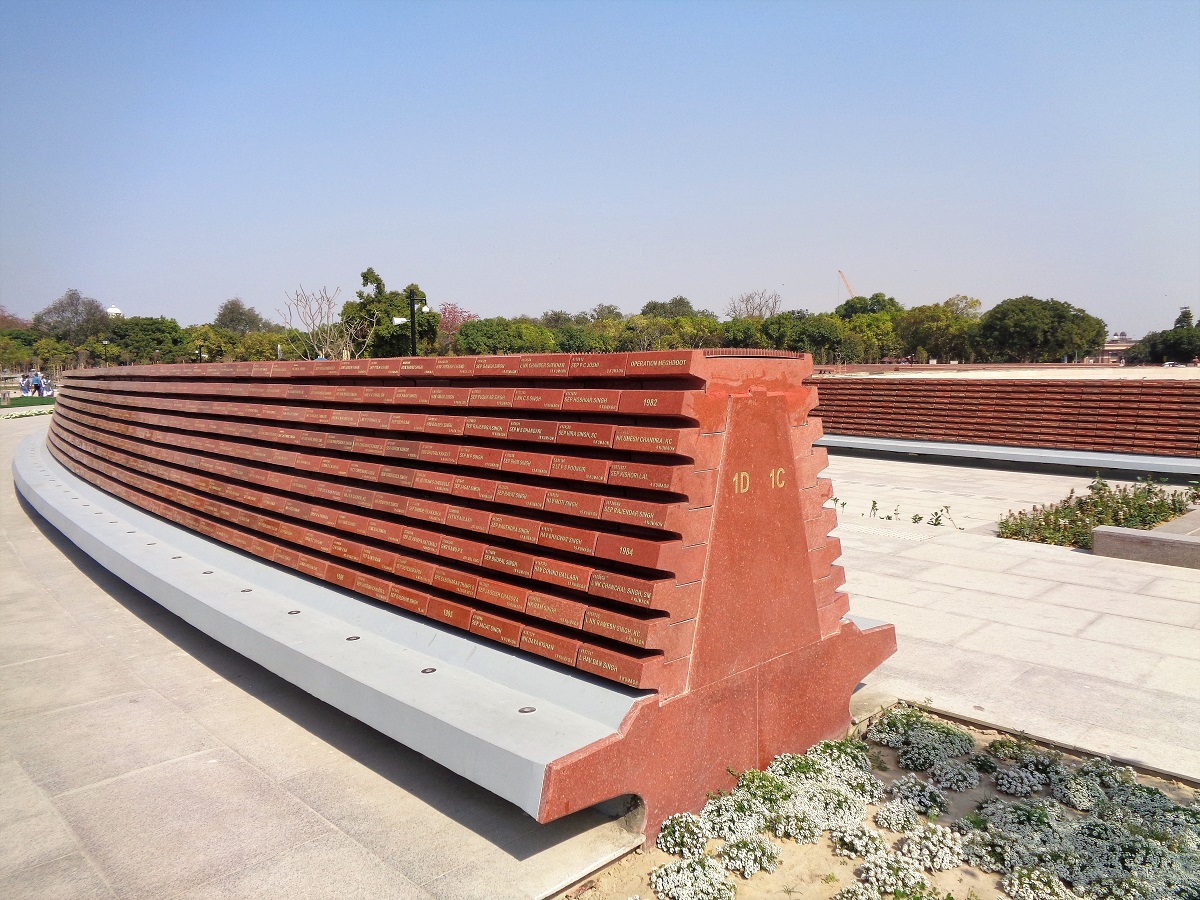 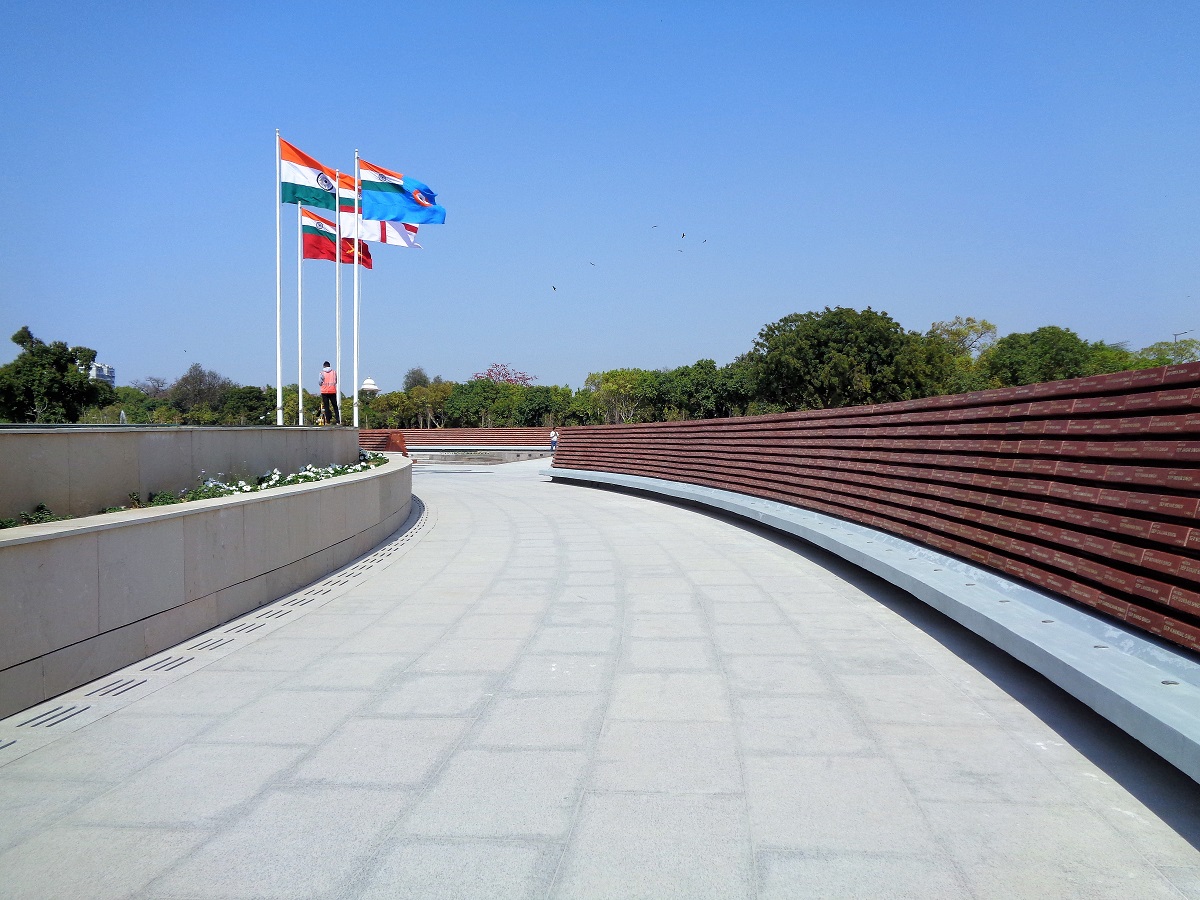 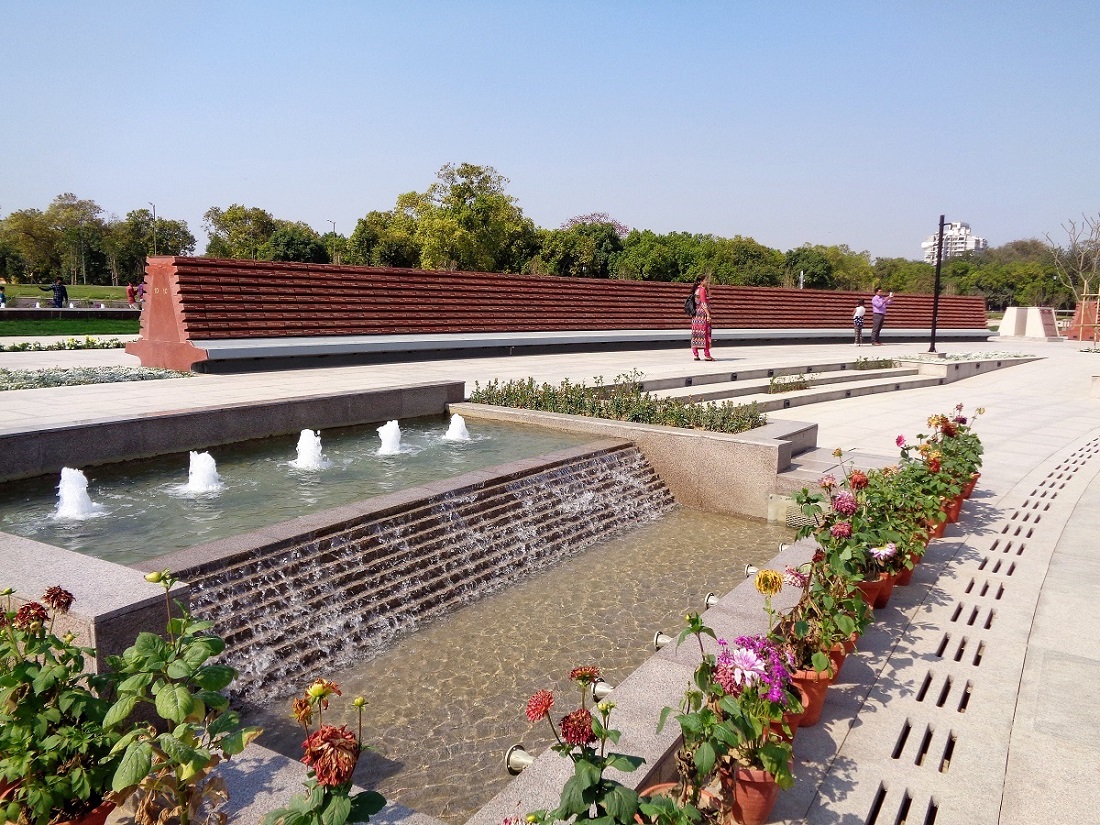 The third ring is the ‘Circle of Sacrifice’ or ‘Tyag Chakra’. It represents the soldiers standing in a number of rows in the formation of concentric circles. Two rows of memorial walls form the ‘Circle of Sacrifice’. These walls have been designed as a modular self-balancing structural stacking system with a height of 1.5m. Granite stone slabs on which names and ranks of martyrs have been engraved are arranged in a linear strip formation. These continuous horizontal bands of stones hold and protect themselves and its occupants within, symbolising discipline, order, and commitment of bravehearts towards the nation. The names of 25942 martyrs have been inscribed on the walls of sacrifice. 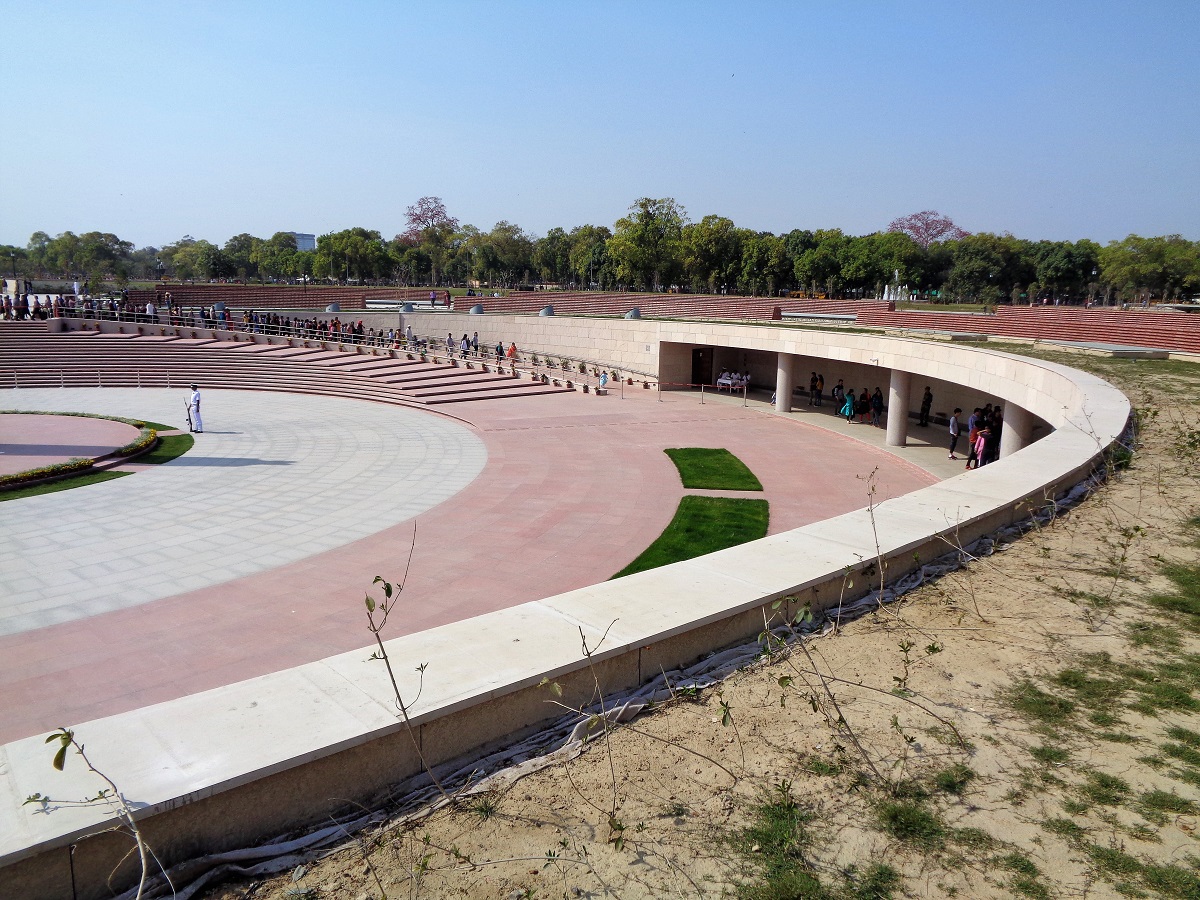 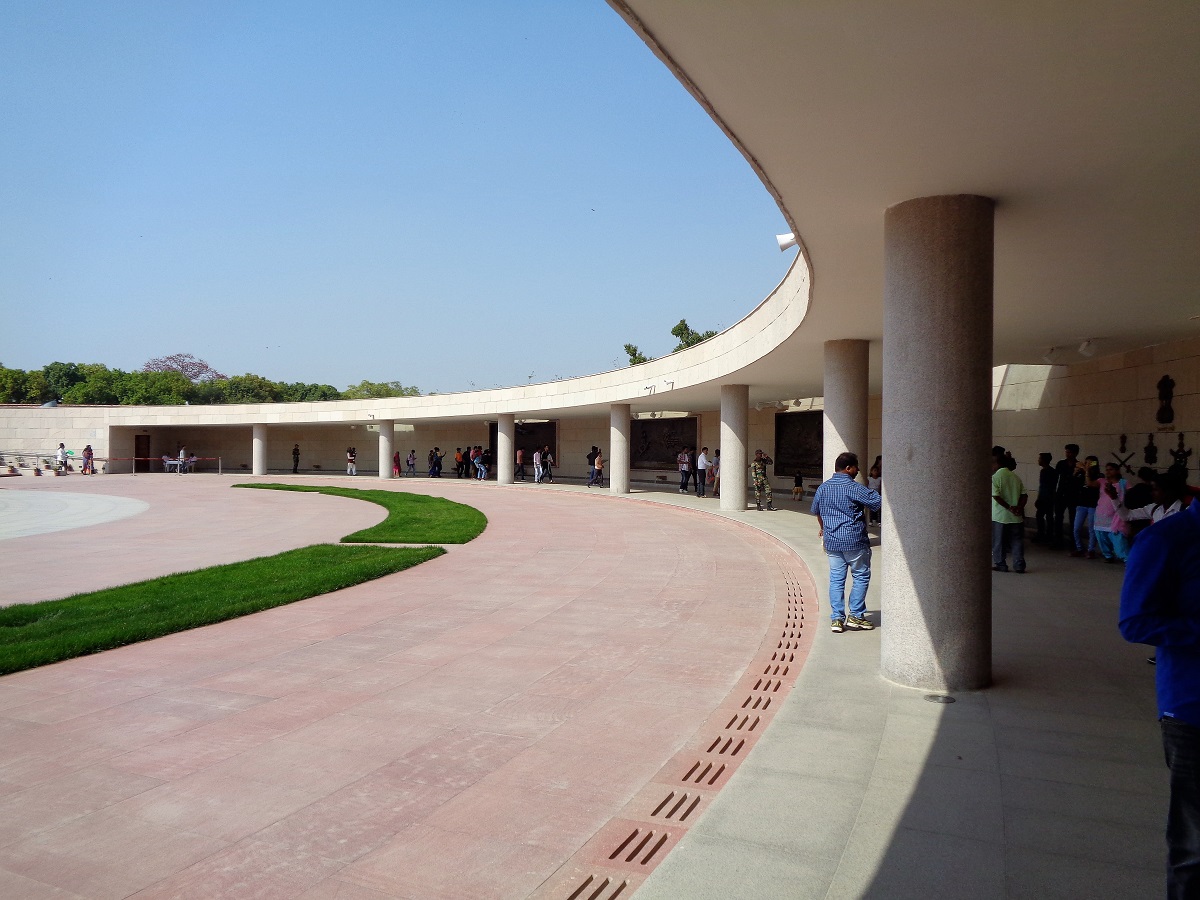 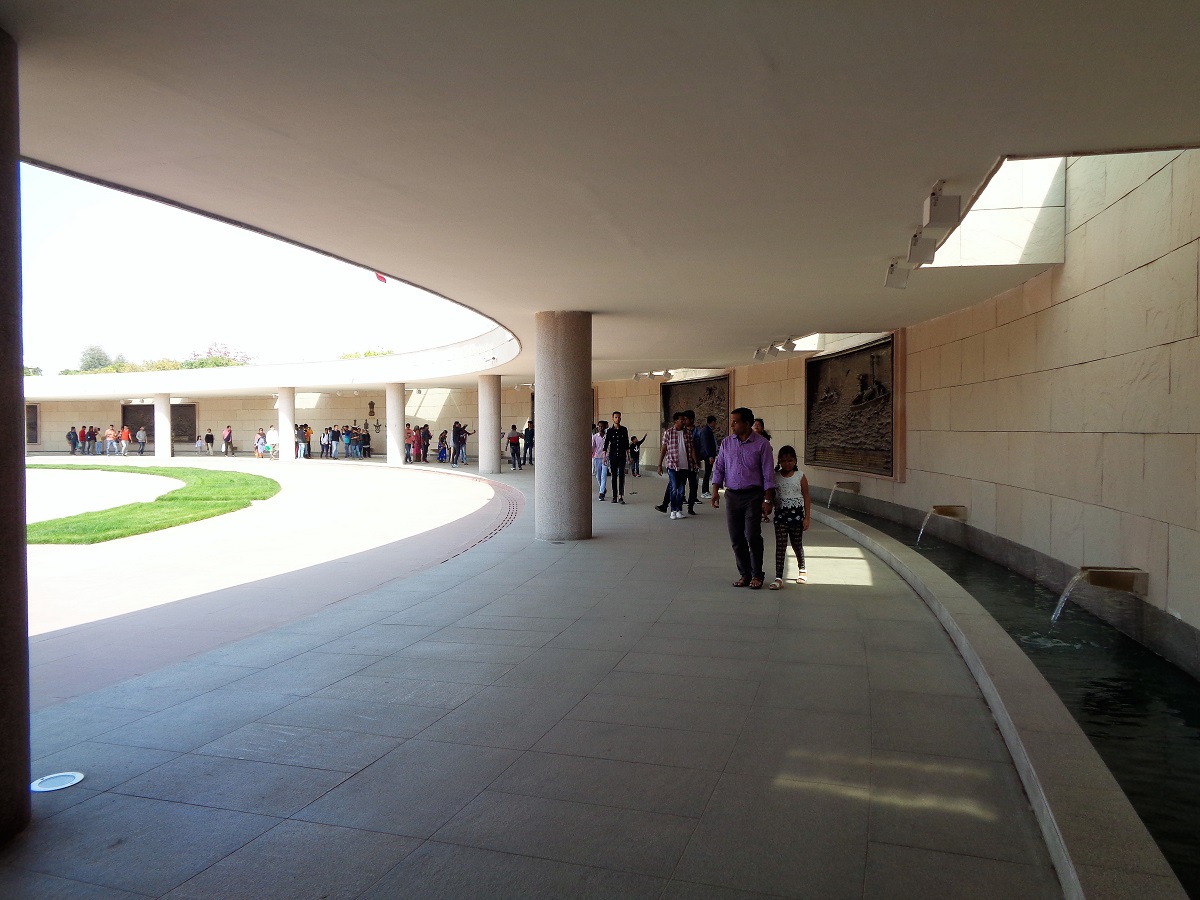 The fourth concentric layer is the ‘Circle of Bravery’ or ‘Veerta Chakra’. It is designed as an underground colonnaded semi-open gallery which holds six bronze murals in bas-relief. These murals depict six important battles fought by the Indian soldiers which were the turning point in the history of nation building. These murals have been designed and sculpted by non-other than Ram Sutar - a 93-year-old, and most celebrated sculptor of India. 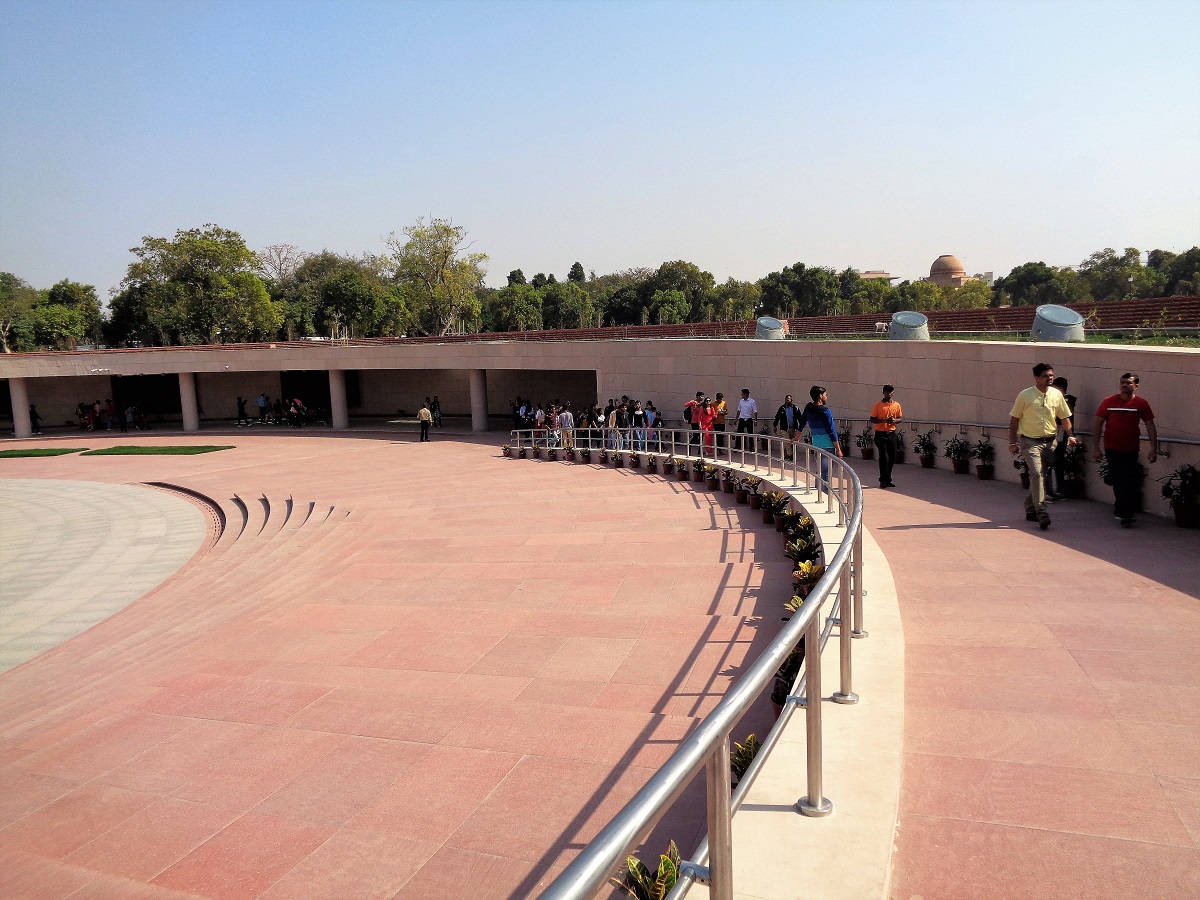 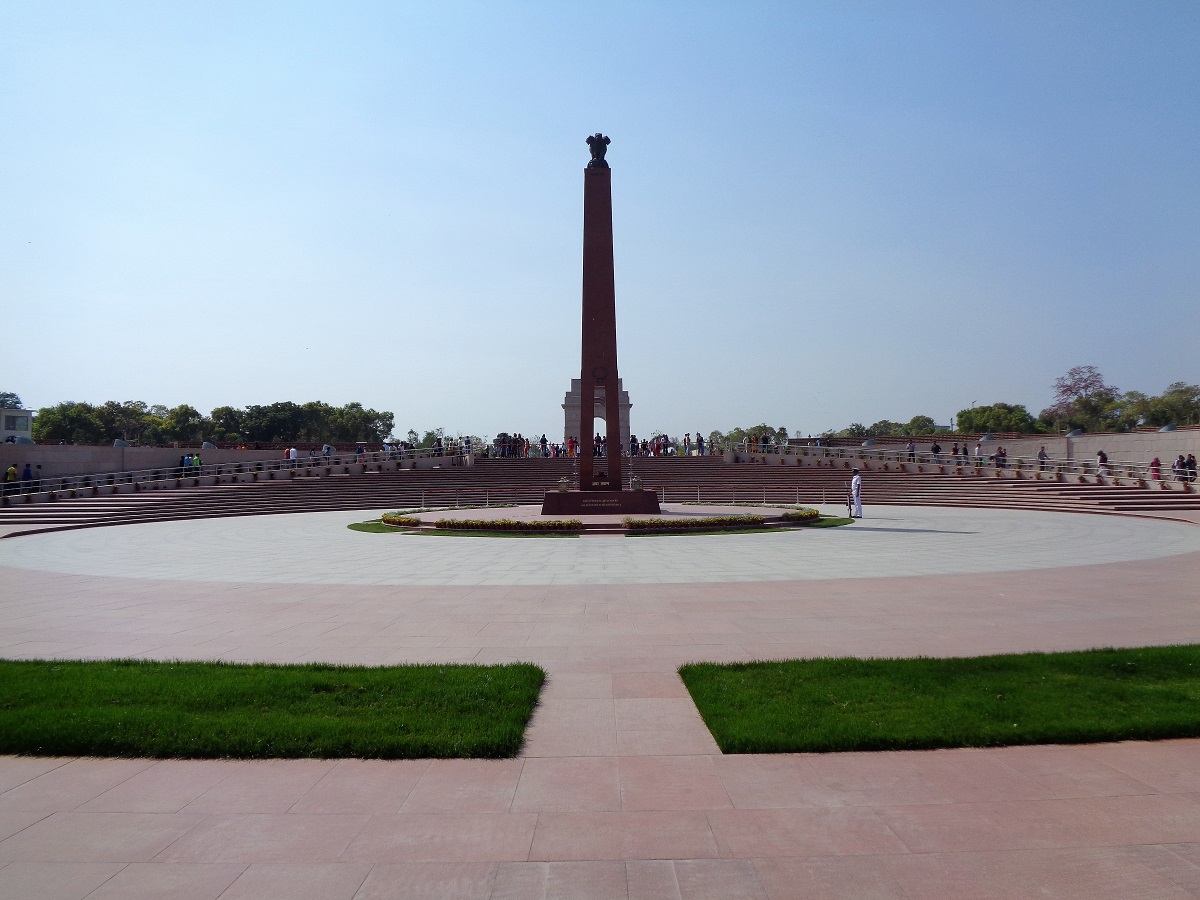 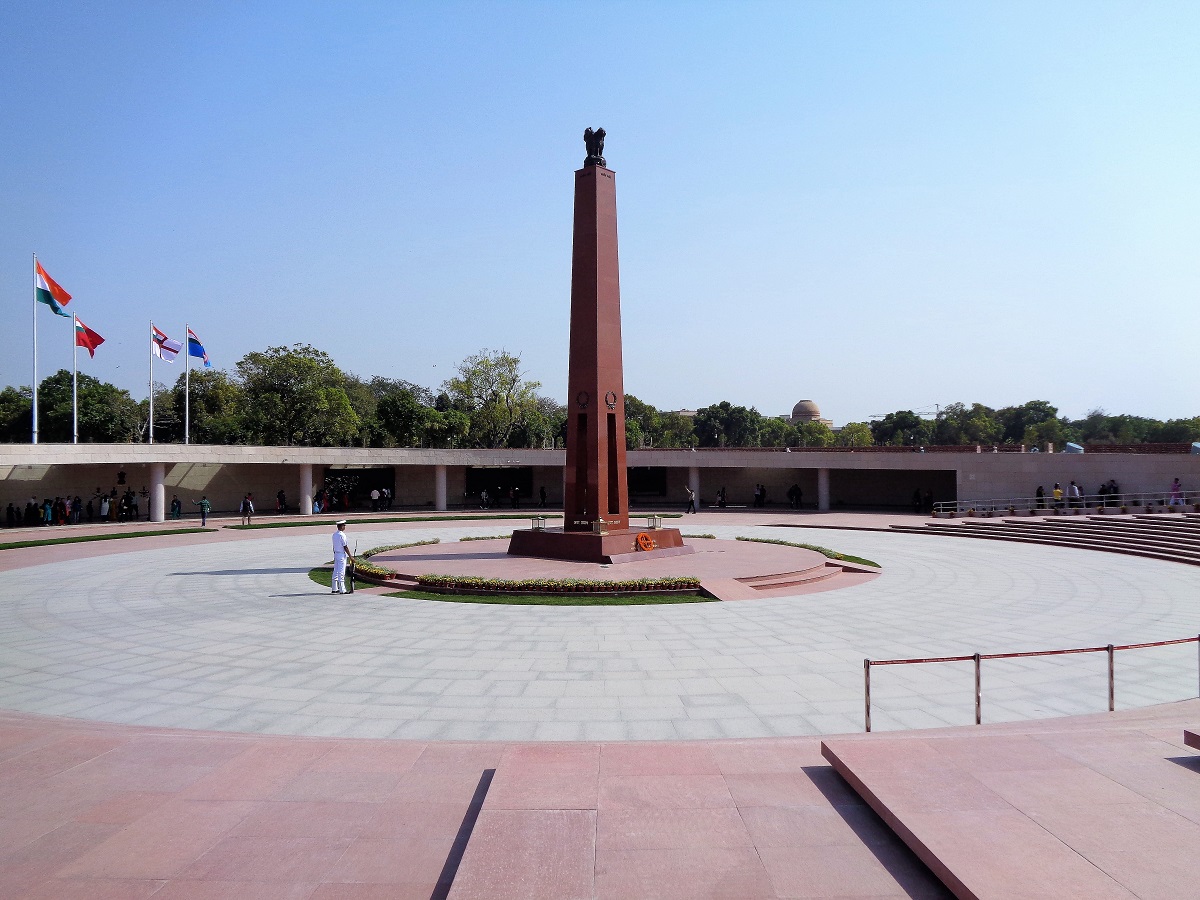 The fifth and innermost layer of the memorial is the ‘Circle of Immortality’ or ‘Amar Chakra’. This is the focal point of the memorial which symbolises the immortality of the soldiers who laid down their lives. The epicentre of ‘Amar Chakra’ is marked by a 15-metre-high obelisk which holds the ‘Amar Jawan Jyoti’ at the base and the State Emblem of India at the top. 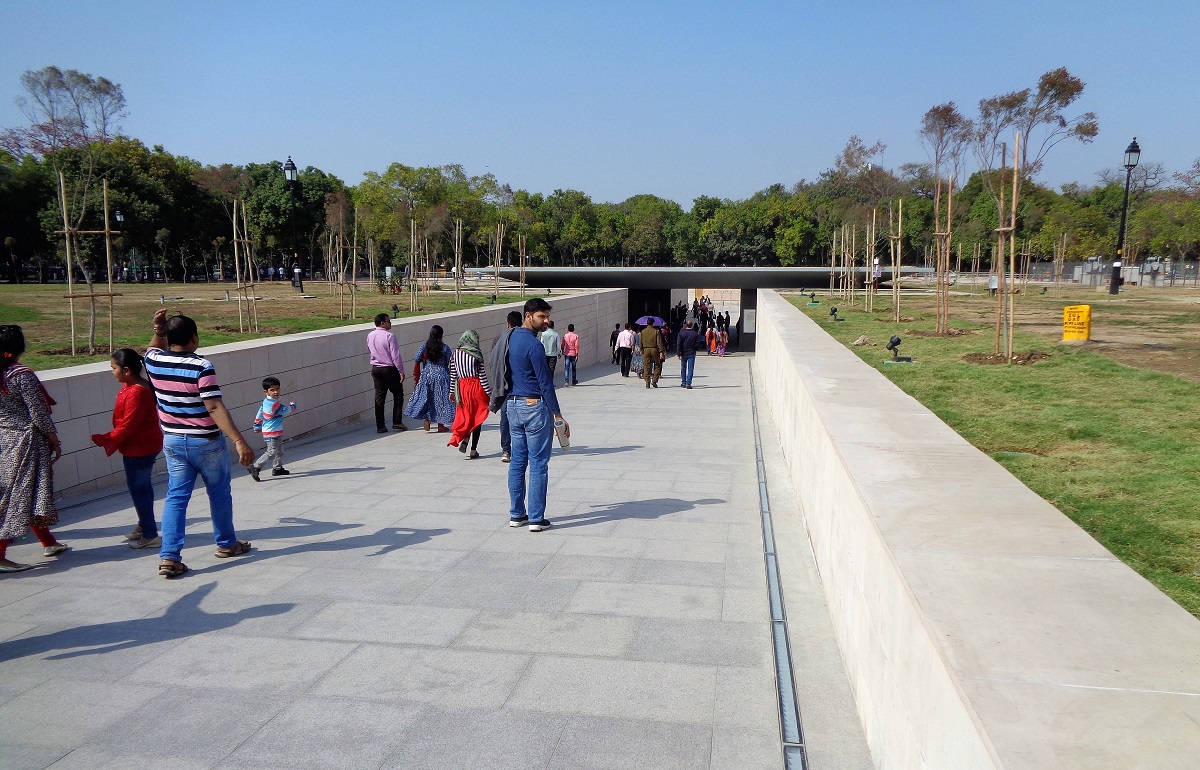 All the open spaces in and around the memorial are meticulously landscaped with earth forms, water features, and flora and fauna. The landscape design is based on the concept of Mughal Gardens which emphasises the belief that ‘gardens are a door to the heaven’. Yet another feature of the campus is the ‘Param Yodha Sthal’ which is a separate garden developed on a large expanse of land adjacent to the National War Memorial towards its north-west. This garden is exclusively dedicated to the 21 ‘Param Vir Chakra’ awardees. The ‘Param Vir Chakra’ is India’s highest military decoration awarded for displaying distinguishing acts of valour during wartime. 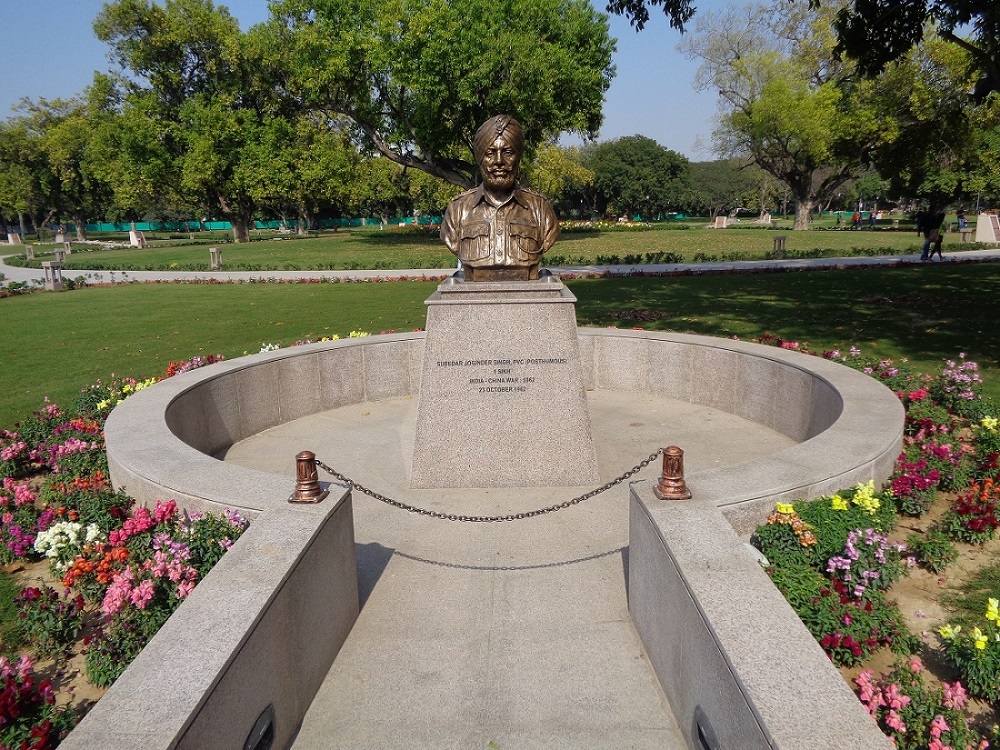 The ‘Param Yodha Sthal’ incorporates bronze statues of the ‘Param Vir Chakra’ awardees. The park is designed with existing large trees in position and well laid out pathways, flower beds, and grassy lawns.

The success of the National War Memorial can be gauged from the fact that thousands of visitors visit it daily.